There are three main ways to commute from Douz to Tunis:

Douz does not have an airport so to be able to fly to Tunis, you must go either to Tozeur or Gabes. One-way flight would cost anything between US$170 and US$250.

There are two daily trains from Gabes to Tunis – one at 11:15 and next at 22:30 (no weekend services). It takes about 6 hours to reach Tunis, via Sfax, El Jem, Hamamet, etc. Note that this train doesn’t halt at Sousse station.

Being on a budget, I chose the louage-train option and started from Douz hotel at 6:30am for a 10-minute walk to the louage/bus station. The hotel staff had mentioned the 7am SNTRI bus that takes 3 hours to Gabes and costs TND 3.500. But on reaching the station, I noticed that a louage was almost full and ready to leave for the 2-hour drive to Gabes, via Kebili. And knowing the fact that the buses cannot be reliable to be on time, I hopped on in the louage and reached Gabes at 9am.

The louage station in Gabes is at the eastern end of the town, which is just less than 2km from the train station. With about 2.5 hours in hand, I walked 3km to the Gabes post office for a stamp in my Postal Stamps Travelogue book, and then, some breakfast in a cafe right next to the station. 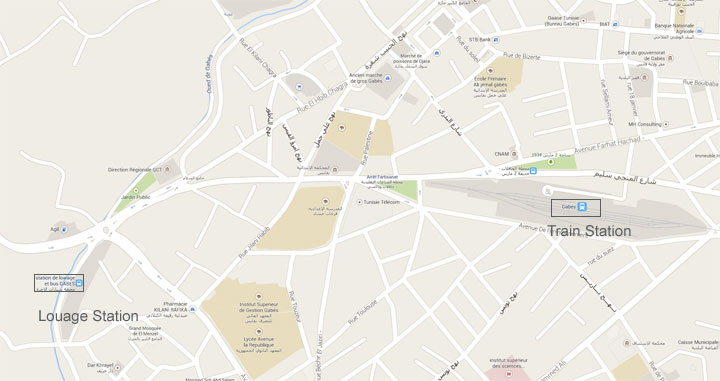 I had re-booked the same room from AirBnb in Tunis, which was a 20 minute walk from the Tunis station to the Kasbah.
Checked-in, headed out for dinner and called it an early day.

Commute from Douz to Tunis.