Once a silver mining town in medieval times, and once the second Czech city to Prague in terms of population, Kutná Hora lies 1-hour train ride from Prague and is a UNESCO World Heritage site for the Historical Town Center, including the Church of St. Barbara and the Cathedral of Our Lady at Sedlec.

Although Kutná Hora has some comparatively drab modern architecture, there are some beautiful buildings with the higher points of the town home to restored older architecture, with Medieval, Gothic, Renaissance and Baroque buildings.

This walking tour of this small town takes about 3-4 hours and is about 2 km. 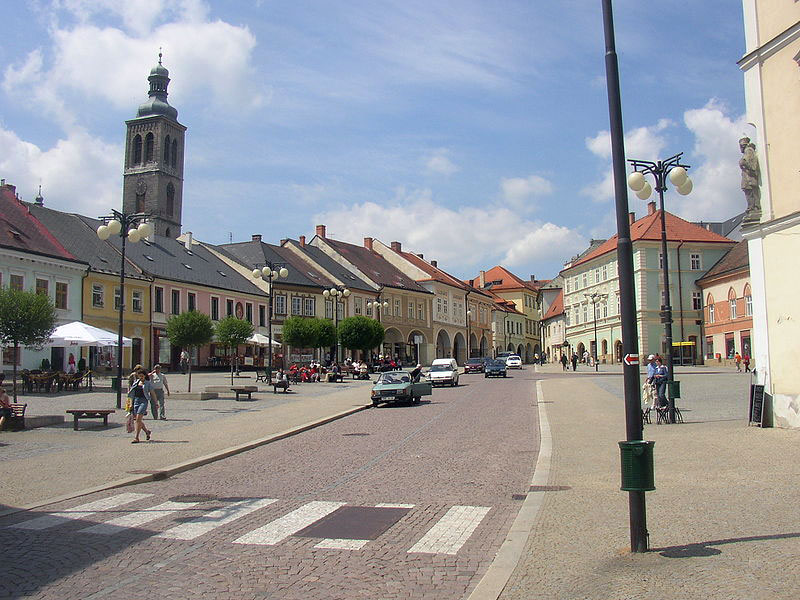 From the square, walk along 28.řijna which is at the southeast corner of the square, and take right across the square to reach the Italian court (2) (Czech: Vlašský dvůr; Address: Havlíčkovo náměstí 552; Price: adult/concession CZK 85/45; Hours: 9am-6pm Apr-Sep, 10am-5pm Mar & Oct, 10am-4pm Nov-Feb). This is the former royal mint that took its name from the Italian craftsmen who was brought in by Wenceslas II to start the business and who began stamping silver coins here in 1300. 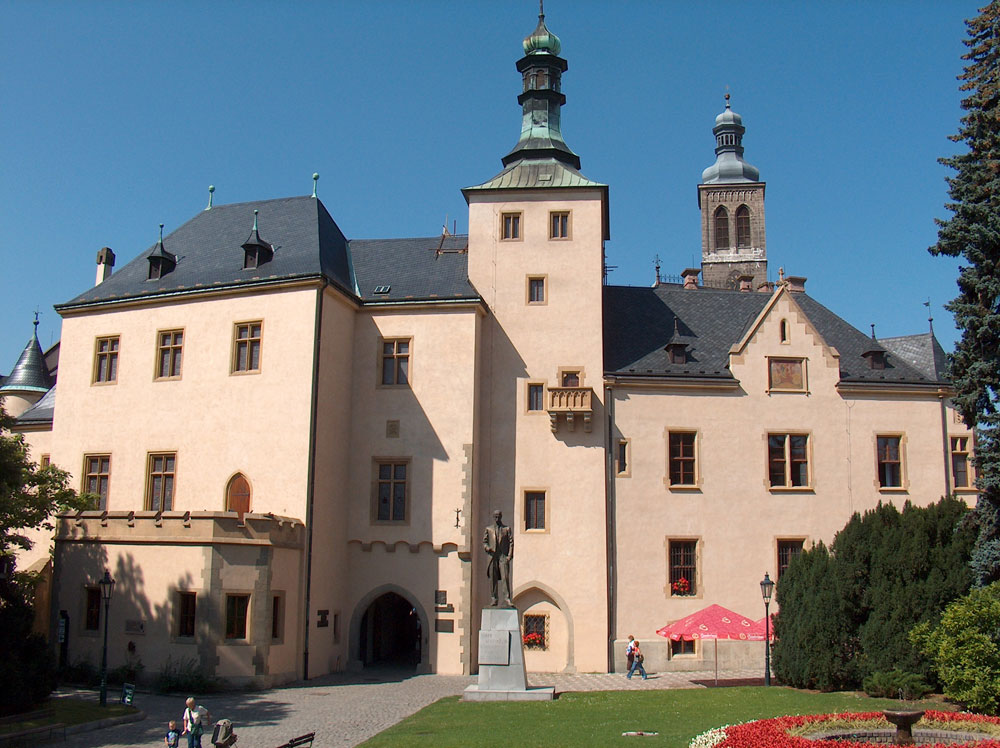 Head west to the colossal Church of St. James (3) (Czech: kostel sv Jakuba). This starkly beautiful Gothic Church with its slender, 86 meter tall tower, is a defining landmark on the Kutná Hora skyline. It is the oldest church in town. Its construction began in 1330 and ended in 1420. The church was originally projected with two towers but it soon turned out that the ground beneath was too unstable due to silver mining to hold both. The unfinished part of the second tower is clearly visible on the church exterior. For the unusual height of its tower, the church was also referred to as the Tall or High Church until the 17th century. The interior combines Gothic, Renaissance, and Baroque artifacts. 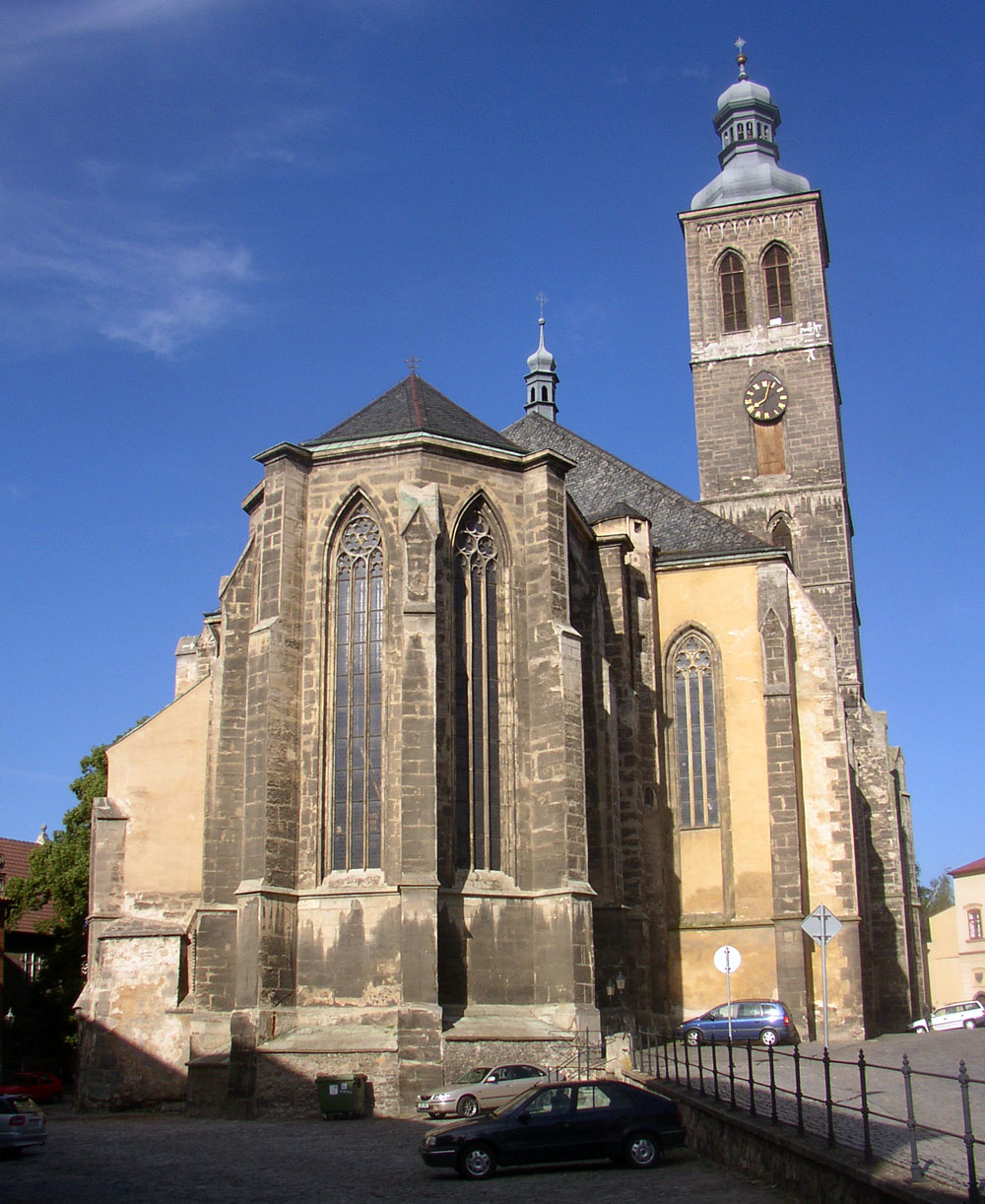 Continue south of the church and you’ll see Ruthardská (4), a photogenic lane running alongside the old town walls. It’s named after Rožina Ruthard who, according to local legend, was sealed alive in a closet by her medieval burgher father.

At the end of the lane is the Little castle (Hrádek), which houses the Czech silver museum (5) (Czech: České muzeum stříbra; Price: adult/concession CZK 70/40; Hours: 10am-6pm Jul & Aug; 9am-6pm May, Jun & Sep; 9am-5pm Apr & Oct; closed Mon) exhibits celebrating the mines that made Kutná Hora wealthy, including a huge wooden device once used to lift loads weighing as much as 1000kg from the 200m-deep shafts. You can even don a miner’s helmet and lamp and join a 45-minute guided tour (Price: adult/child CZK 170/120 combined tour ticket) through 500m of medieval mine shafts beneath the town. During the summer months it is best to book the underground tour in advance. 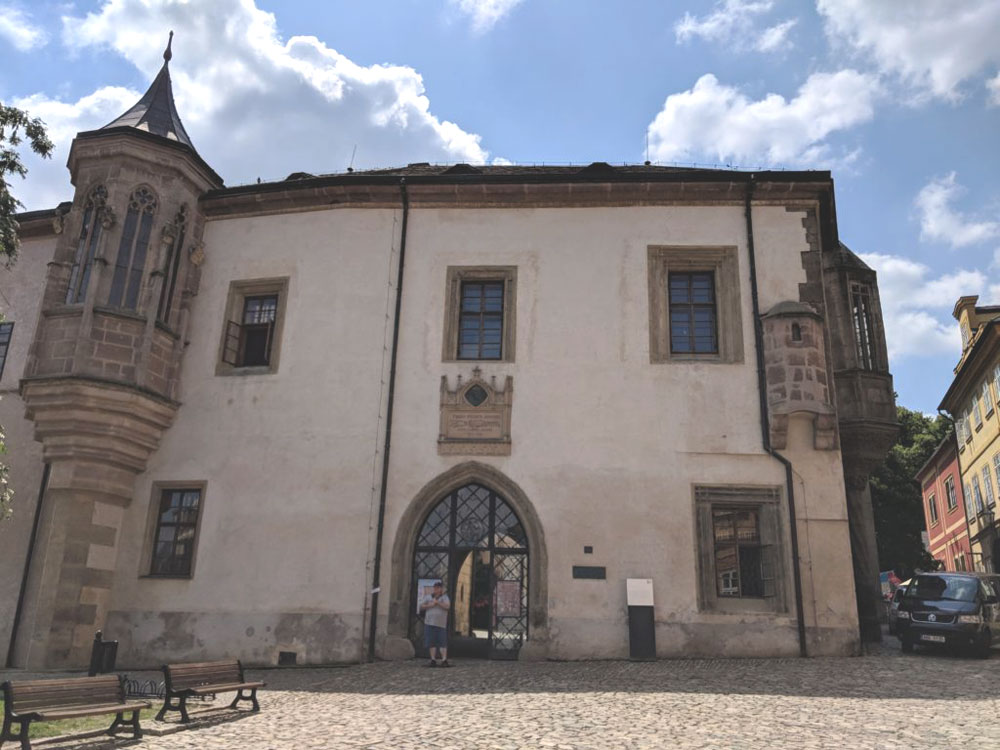 Turn left along Barborská, walk past the façade of the former Jesuit College (6) (Price: adult/concession CZK 80/40; Hours: 10am-6pm Tue-Sun), which is the biggest in Czechia after Prague’s Klementinum. The Jesuits arrived in Kutná Hora in 1626 to convert the Utraquist town to Catholicism. They focused their attention on children and built a college next to St. Barbara’s Cathedral, connecting the two with a covered bridge.

The Jesuit College was built between 1667 and mid-18th century. The building originally had three towers but the middle one had to be removed in mid-19th century for stability reasons. A man-made terrace was created in front of the building and enclosed by a low wall upon which 13 statues of saints were placed. That created a sort of pseudo-bridge, which was supposed to resemble Prague’s Charles Bridge and Royal Route.

On the left side of the street is a row of 13 baroque statues of saints, inspired by the statues on Prague’s Charles bridge. All are related to the Jesuits and/or the town; notably is the second one – the woman holding a chalice, with a stone tower at her side, is St. Barbara, the patron saint of miners and hence of Kutná Hora. 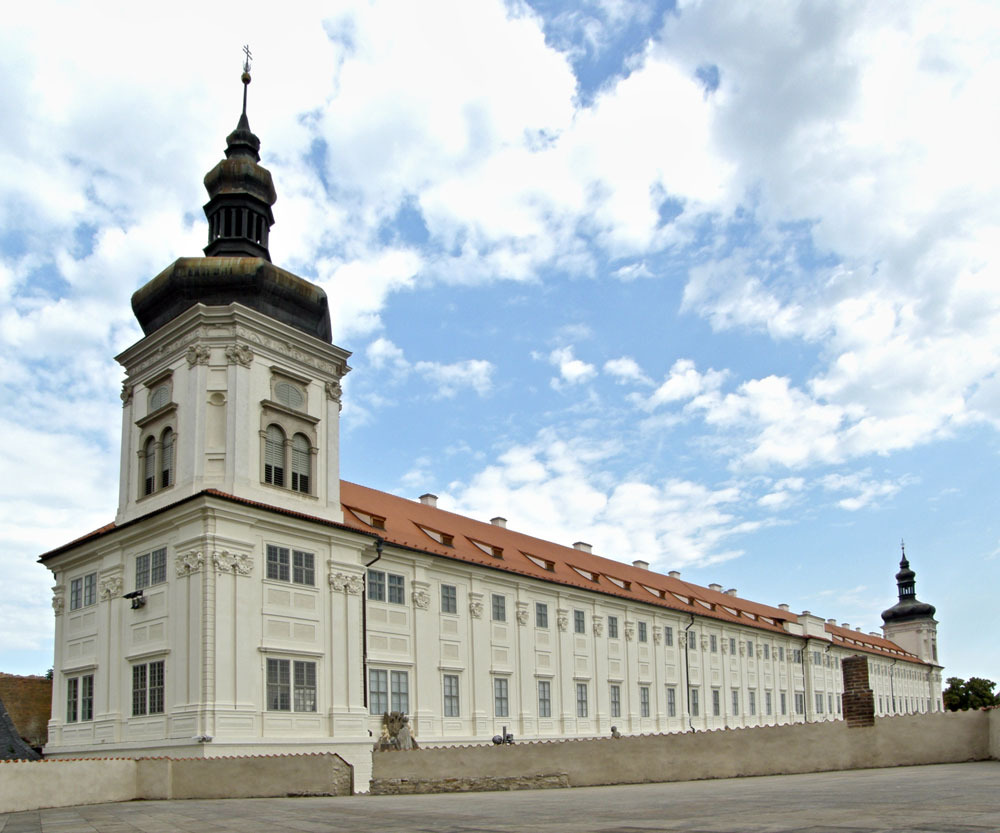 Continue walking on Barborská to reach the Cathedral of St. Barbara (7) (Czech: chram sv Barbora; Price: adult/concession CZK 60/40; Hours: 10am-4pm Nov-Mar; 9am-6pm Apr-Oct; Closed on Dec. 24), which is dedicated to the patron saint of miners, and is one of the finest Gothic churches in Europe, listed as a UNESCO World Heritage Site. Its unique design with a three-tent roof and intricate flying buttresses make it an unmistakable Kutná Hora landmark and the town’s most significant monument. 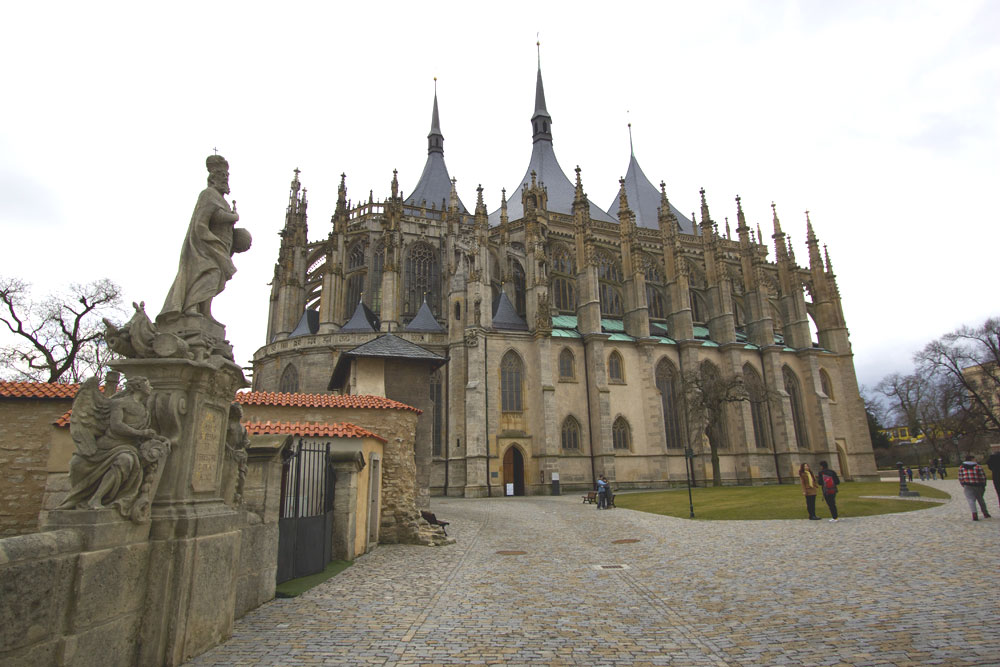 Take a walk around the outside of the cathedral where the terrace at the east end has the finest view in town. At its eastern end is the inconspicuous Corpus Christi chapel (8) (Czech: kaple Božího těla), built in the 14th century. From the viewpoint on its roof you can look across the valley to a rock face in the woods where you will see the giant, carved face of Jaroslav Vrchlický, a famous Czech writer. Tickets for cathedral and chapel are available from a small information office at the end of Barborská. 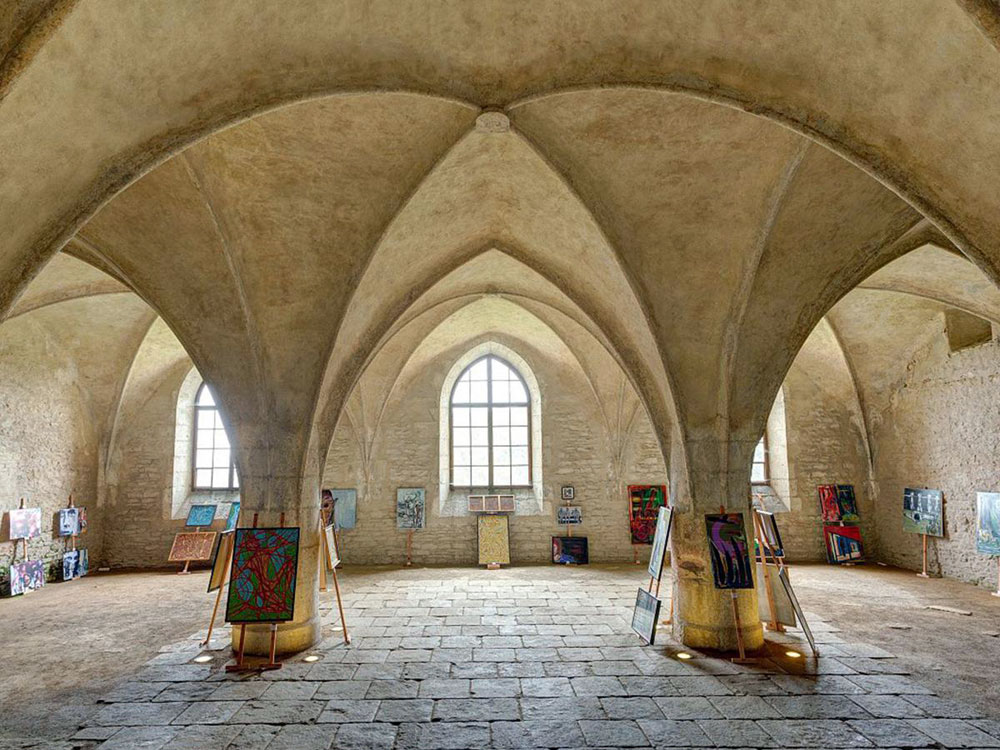 Turn back on Barborská, past the Jesuit College and turn left through náměstí Národního odboje and left again on Husova to see remnants of the old city walls.

Return along Husova, via Rejskovo náměstí, see the Gothic Stone fountain (9) (Czech: Kamenná kašna). The intensive mining activity of the Middle Ages disrupted the underground water sources in Kutná Hora, which resulted in the town being short of drinking water. This problem was solved in 1495 by the construction of a dodecagon-shaped stone fountain on today‘s Rejsek Square. The fountain, which was originally roofed, served as a water reservoir, into which drinking water was brought via wooden piping from the spring of St Adalbert near Bylany 2.5 km away. The town continued to be supplied with drinking water in this way until 1890. The dodecagon-shaped Late Gothic stone fountain was probably the work of the builder Briccius Gauske of Wroclaw. 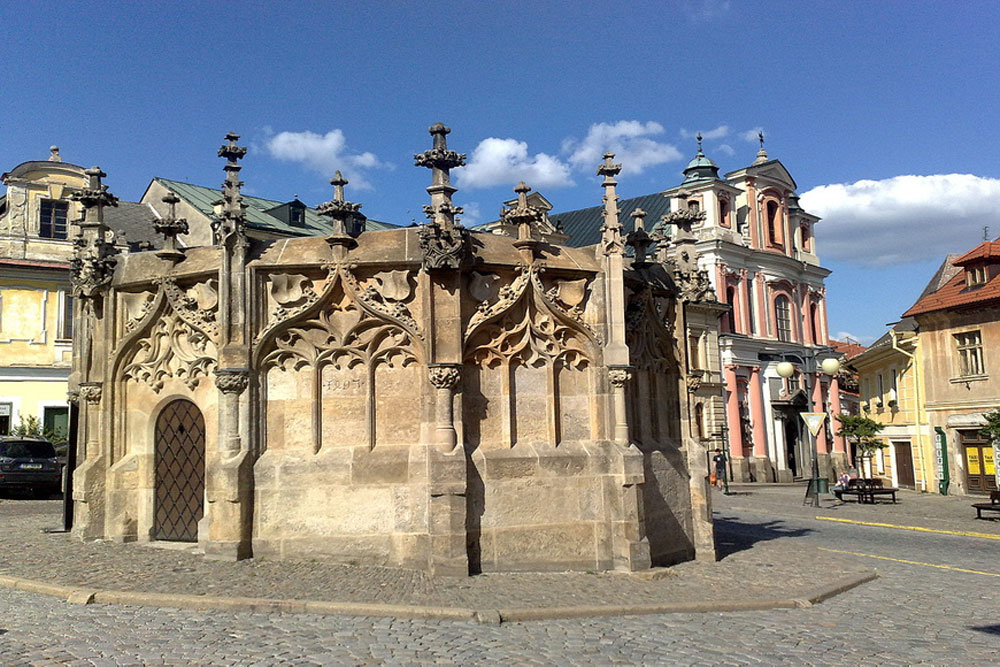 Reach the baroque church of St. John of Nepomuk (10) (Czech: kostel sv Jana Nepomuckého; Price: adult/concession CZK 40/20; Hours: 10am-5pm Apr & Jun-Oct, 9am-5pm May) with its frescoed ceiling depicting the legend of Bohemia’s patron saint. In many ways, the Church of St John of Nepomuk is rather different from what travelers visiting Kutná Hora expect from the local architecture. The facade of the building is decorated with statues of St Adalbert and St Prokop, set in side niches. 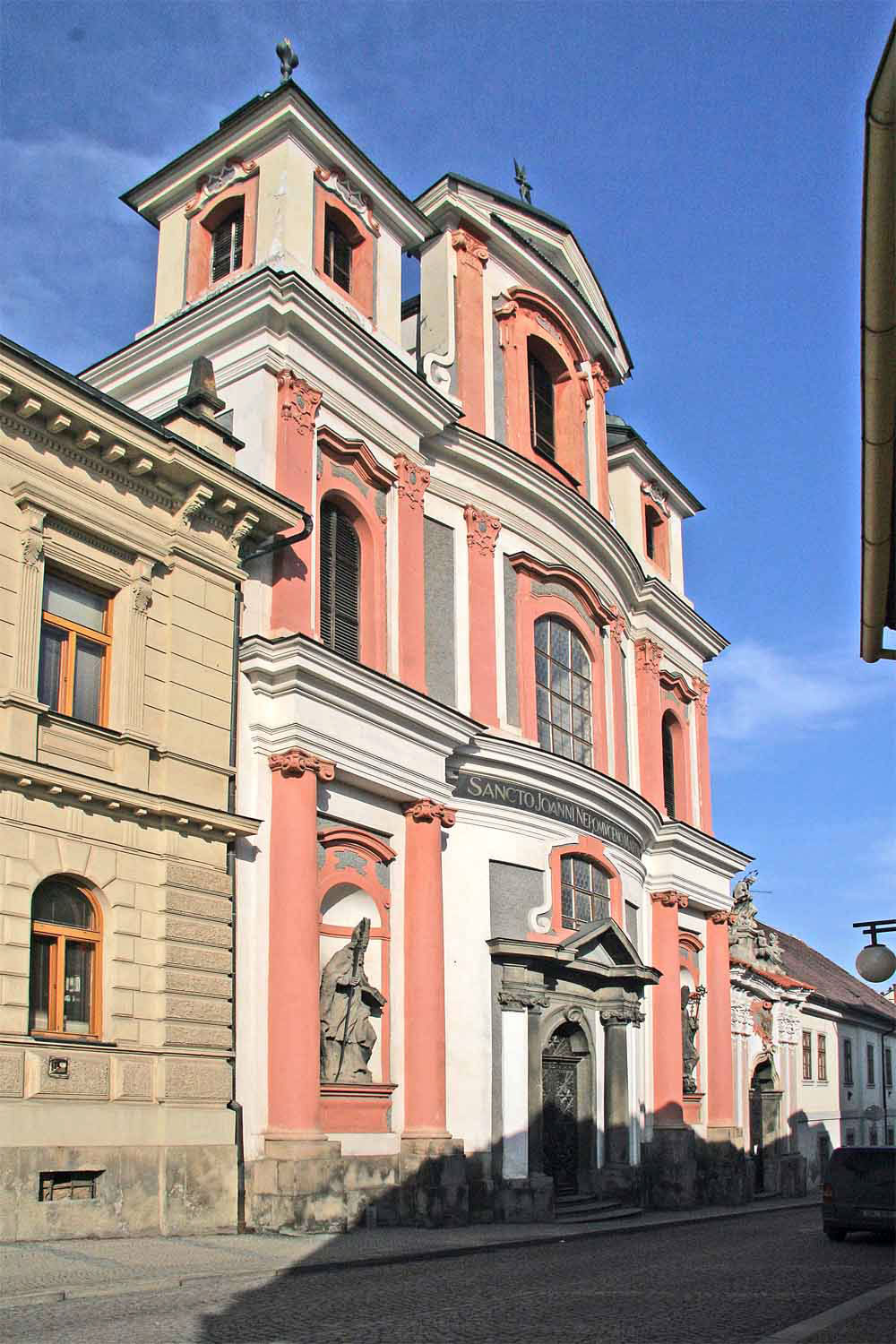 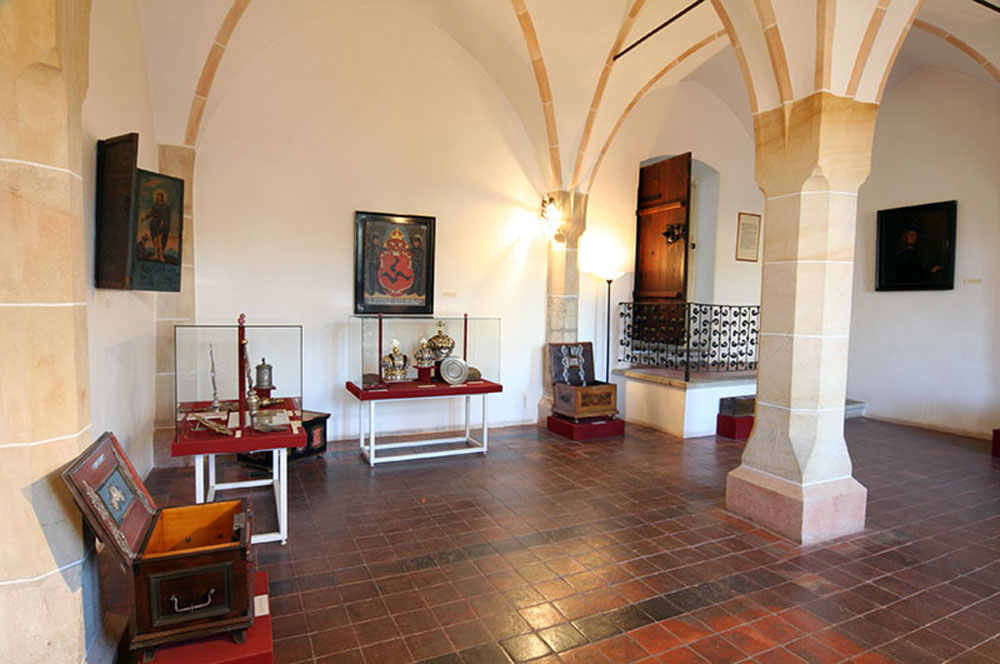 Head east and then south to Šultysova, once part of the town’s medieval marketplace, lined with townhouses, in particular the Marble house (12) (Czech: dům U Mramorů) at No 173. At the end of the street is a 1715 plague column.

Cross Palackého náměstí and walk down Tylova to No 507, the birthplace of Josef Tyl (13) (Price: adult/concession CZK 10/5; Hours: 10am-6pm Tue-Sat Apr-Oct), the playwright who wrote “Kde domov můj?” (Where Is My Home?), which became part of the Czech national anthem.

Tyl’s birthplace was originally called “The Golden Comb House” and used to stand in former Čáslavská, today’s Tylova street. It was built on Gothic foundations in 1823, after a great fire of the town that destroyed large part of the quarter. On the front wall there is a relief of J.K.Tyl installed commemorating that Tyl, writer, dramatist and author of words of the Czech national anthem, was born here on February 4, 1808. 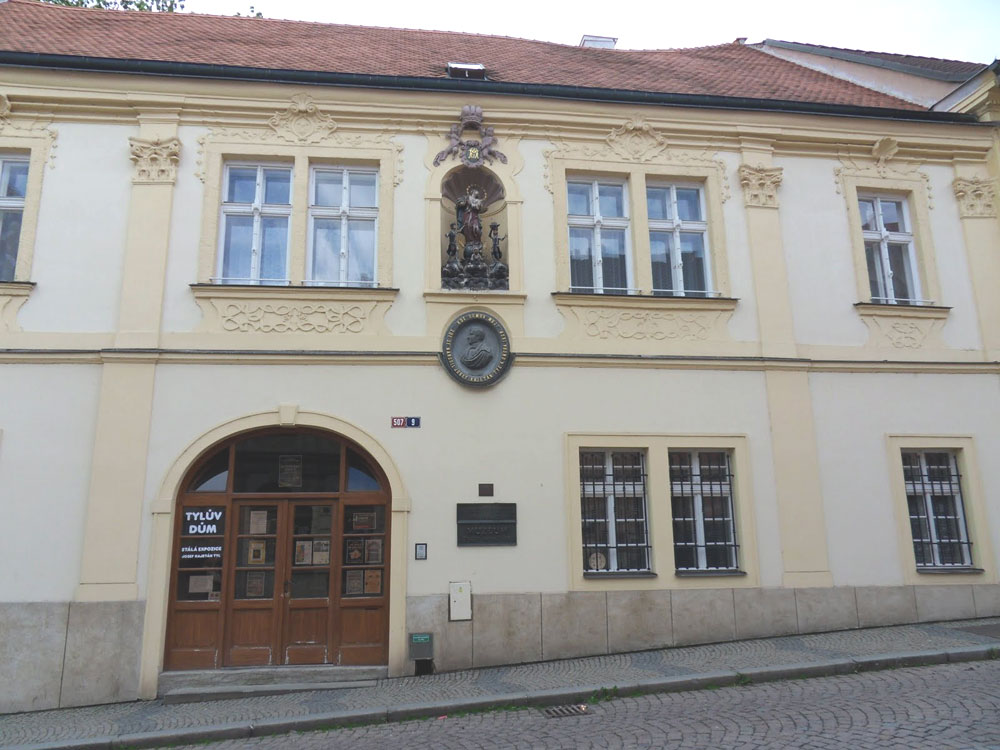 Cross the square again to Kollárova and turn right on Jiřího z Poděbrad. Two blocks down is the former Ursuline Convent (14) (Czech: klášter Voršilek), with a 1743 chapel by Kilian Dientzenhofer. 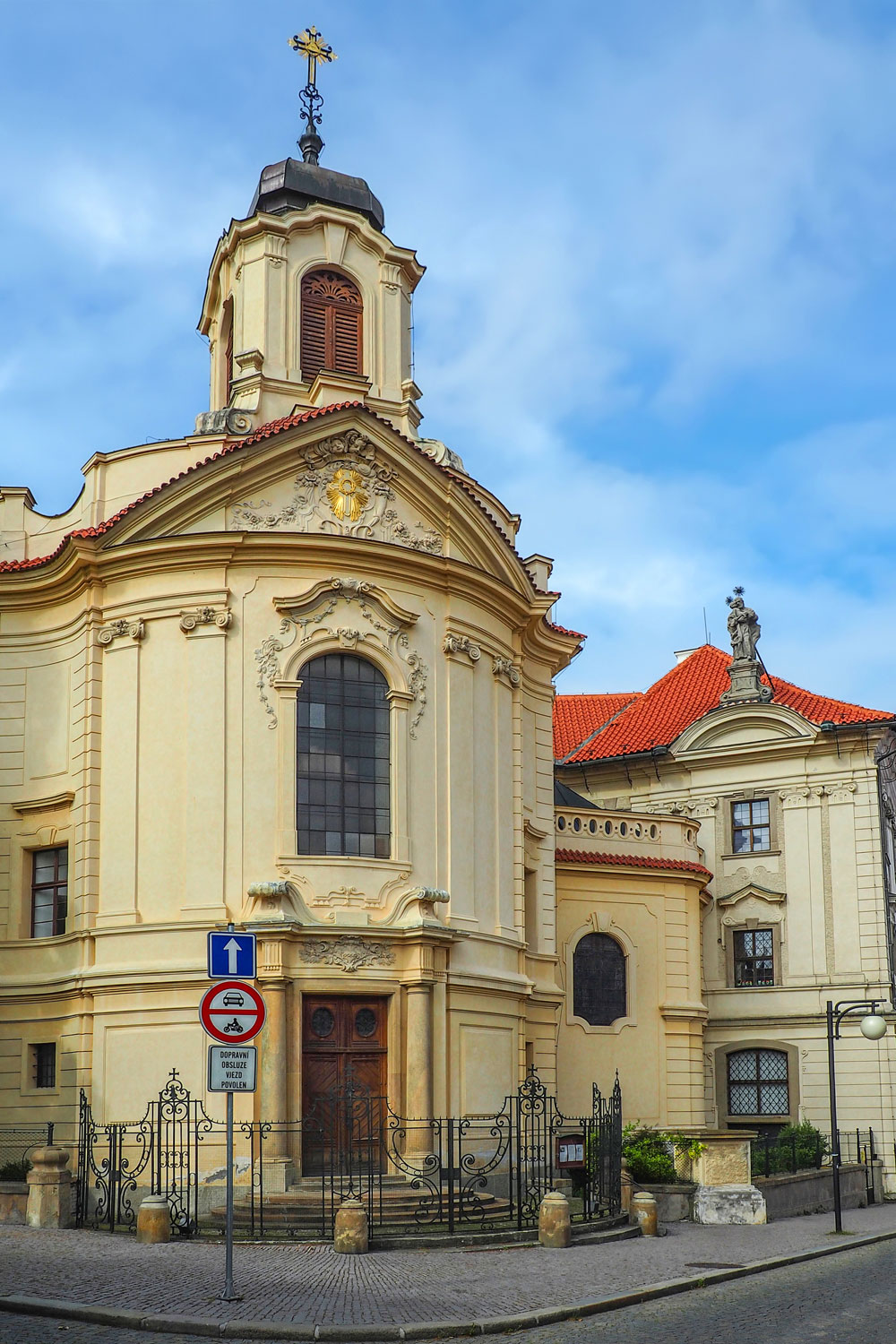 If you arrive in Kutná Hora by train, the first stop is the remarkable Sedlec ossuary (Czech: Kostnice; Address: Zámecká 127; Price: adult/concession 45/30Kč; Hours: 8am-6pm Apr-Sep, 9am-noon & 1-5pm Oct, to 4pm Nov-Mar), which is just a 10-minute walk south from the main train station. This are remains of no fewer than 40,000 people. Garlands of skulls and femurs are strung from the vaulted ceiling, while in the center dangles a vast chandelier containing at least one of each bone in the human body. Four giant pyramids of stacked bones squat in each of the corner chapels, and crosses, chalices and monstrances of bone adorn the altar. There’s a Schwarzenberg coat of arms made from bones, and Rint even signed his name in bones at the foot of the stairs.

Read more for pictures and details. 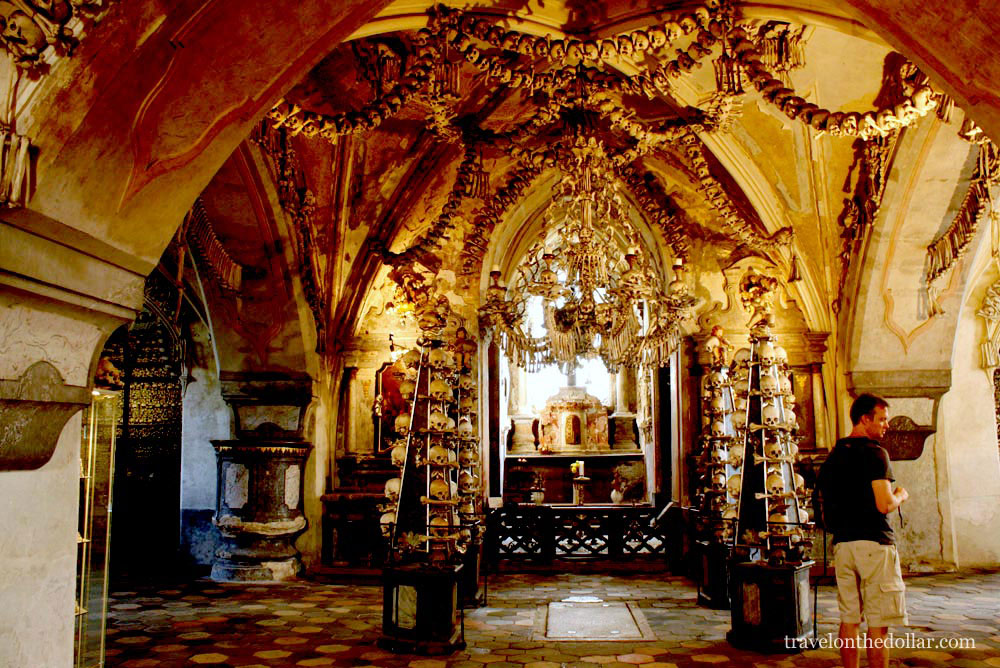 A few minutes’ walk east of the ossuary, on the main road, is the monastery’s Church of the Assumption of Our Lady (Czech: kostel Nanebevzetí Panny Marie) which is a part of Kutná Hora’s UNESCO World Heritage List. The ossuary is 2.5km northeast of Kutná Hora’s old town and can be reached by local bus, or a 30-minute walk along Maysarykova and Vítězna streets.

« Itinerary: What to do in Dubai for Three Days
Updated: Traveling to Europe will require a ‘visa’ for 60 visa-waiver countries »