The hostess of the house I stayed at was kind enough to serve breakfast every morning. With some home-cooked amazing breakfast, I headed out early in morning, targeting to reach Carthage at 9am so I can visit all the sights the city has to offer.

The walk from the Medina to Tunis Marine station was of 25 minutes along Ave de France – the main drag of the city.

Coming out of the Medina from the Bab el Bhar gate – called the Gate to the sea, this remains unchanged since its erection in 1848 – brings you on Ave de France, walk east for five minutes and you will reach the majestic Cathedral of St. Vincent de Paul.

Dedicated to Saint Vincent de Paul, patron saint of charity, the cathedral is the see of the Archdiocese of Tunis. It is situated in the Place de l’Indépendence in the Ville Nouvelle, a crossroads between Avenue Habib Bourguiba and Avenue de France, opposite the French embassy. 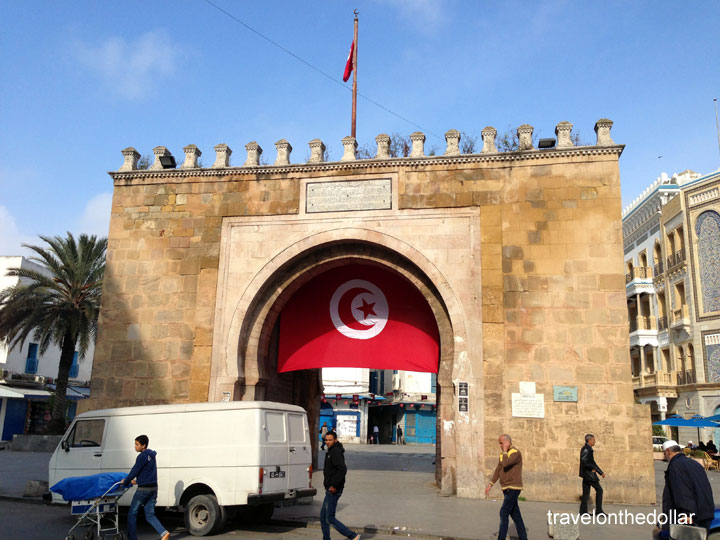 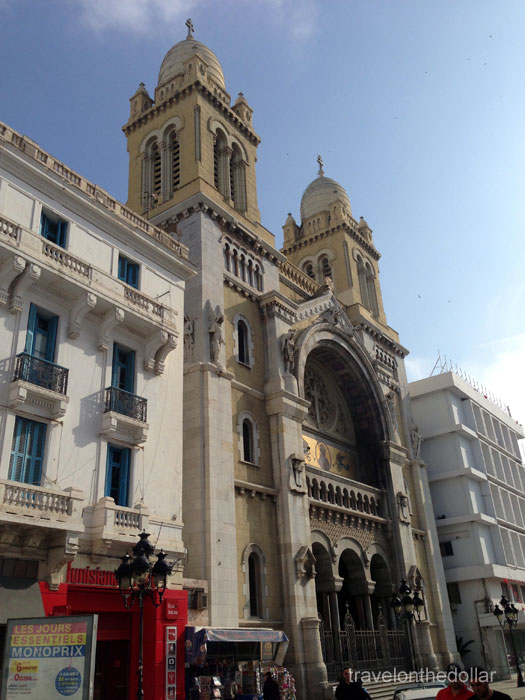 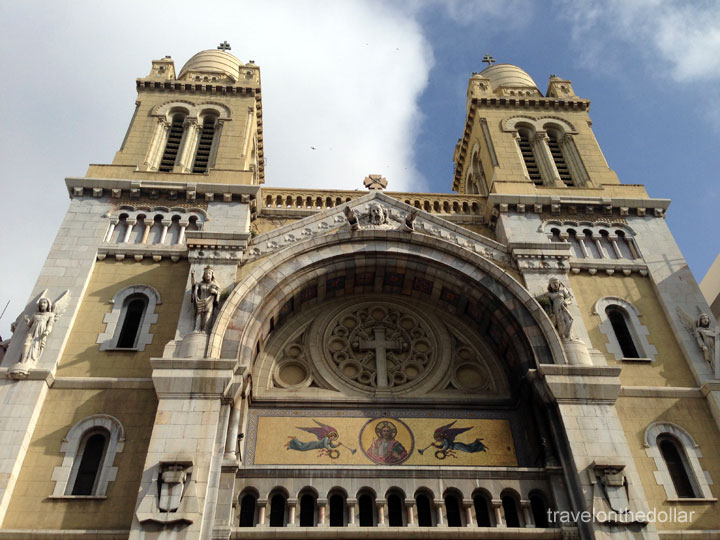 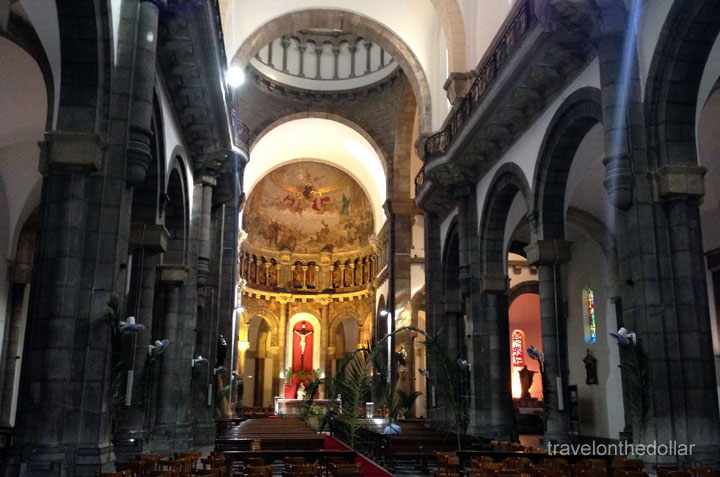 I continued walking east on Avenue de France and noticed that there was hardly anyone on the road, quickly realizing it was Sunday morning! The road leads to the famous metal clock tower, built on the eastern end of Avenue Habib Bourguiba to commemorate 7 November Independence Day. The tower stands 38 meters and is build in mashrabiyya style from bronze colored steel. The fountain in front of the clock tower is illuminated during the night or on special occasions. Tunisians like to compare it with London’s Big Ben, they have given it the nickname Little Ben! 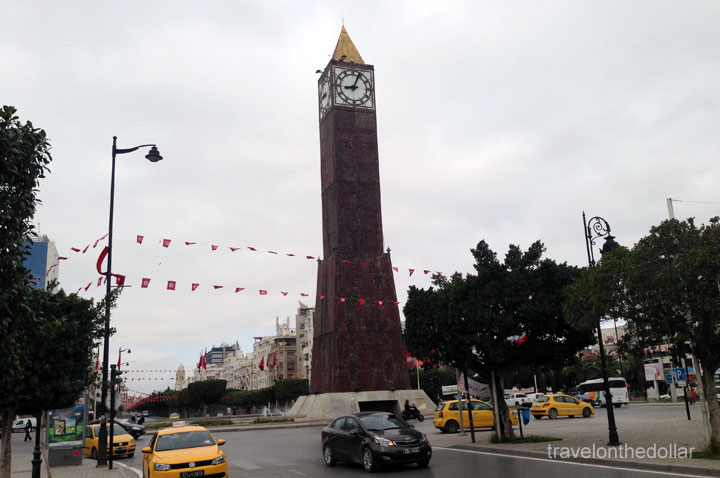 Reaching Carthage is one train-ride through the TGM light rail. Note that there are no signs at the station (Tunis Marine station) indicating the TGM rail or the ticket window. The station is on the right-side of the road, if you are walking east.

Take the TGM light rail line from Tunis to one of the following stations: 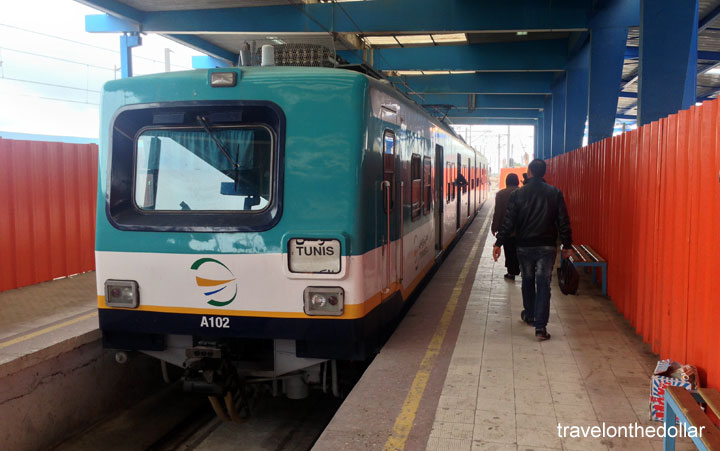 All the sights to see in Carthage are within 2km walking distance. You can buy a ticket for TND 11 at any one of the sights, that allows access to about 10 different historic sites.

A 7-minute walk (with clear signs posted from the station) from the Carthage-Hannibal station beings you to Antonine Baths. These ruins of the largest Roman baths outside of Rome itself includes a Punic cemetery, some old houses, some Punic kilns, a chapel, some graves, mosaics, etc. Guides are available in a number of languages, and may be worthwhile as the site is large. No individual entry ticket, but have to purchase the multi-site ticket. Please note that although it is illegal to take photographs in the direction of the presidential palace, no one really appear to care. Although one tourist at the site asked me to be careful because one guard warned him about this. Doing so, especially when traveling alone, may land you in jail for up to 3 years.

Travelers will be quite disappointed for this site, because there’s literally ruins! Except of a few pillars of the baths remaining, there’s really nothing to see or will make you go in awe.

Next up was a walk up the stairs to the top of Byrsa Hill at the Carthage Museum, and the Acropolium (St. Louis Cathedral) where most remnants excavated from the ruins have been stored in the cavernous museum, documenting both the Punic and the Roman eras. The museum is included in the multi-site ticket, but the Cathedral costs an extra TND 5. The museum is open from 8:30am to 6:30pm (summer and winter timings vary).

The museum grounds offer sweeping views of the coast and city, and also include the ruins of some Punic streets, the former site of a public library, numerous sculptures, a chapel or church, some excellent mosaics and some coffins. Unfortunately many items about the grounds are unlabeled, so a guide may be useful.

Of the rest of the sights to see in Carthage, the last one I visited was the World War II North Africa American Cemetery and Memorial. This is the final resting place for 2,841 American military lost during the War in North Africa. A monument is inscribed with the names of 3,724 Americans whose remains were never found or identified. The memorial court contains large maps in mosaic and ceramic depicting operations across Africa.

You can take a bus or a taxi from Carthage to Sidi Bou Said, but I decided to walk from Carthage-Amilcar station to Sidi Bou Said. It takes about 15 minutes to walk along the main road, Rue du Maroc. This glorious city of whit-washed houses with blue doors & windows has its distinct charm. Filled with tourists and locals alike, you will be walking up a ramp-road to the cliff that brings you to the various, expensive restaurants to relax and enjoy a meal.

The Café des Délices is located at the end of the road, overlooking the Mediterranean Sea. They specialize in fish, and make sure to ask for the price of the fish you’re about to eat because some can go all the way up to TND 100 per fish.

The Sidi Bou Said metro station was under construction, but right outside the station is the ticket window where you can purchase a ticket to Tunis Marine station for TND 0.650. Then get on the local SNTRI bus that will drop you to Carthage-Presidence station, from where you can take the train back to Tunis (on the same ticket).

Arriving back to the Medina, I walked to the Place du Gouvernement where the Ministry of Finance building is located.

Right across from the Ministry building is the Kasbah Square that houses the Tunis City Hall and the Independence monument with lots of Tunisian flags.

Opposite from the square is the famous Mosquee El-Kasbahmuch on one side the Mosquee Sidi Mahrez on the other side which is strongly influenced by Ottoman architecture, showing similarities to the Sultan Ahmet mosque in Istanbul with a central dome with cupolas occupying the four corners of the square of prayer hall. Polychrome tiles were imported from Iznik, Turkey, to cover a large part of the wall facing the Mecca.

All the sight-seeing in the day had definitely worn me out, so I got some Chawrma packed from a near-by fast-food restaurant and headed back to the home, for a quiet and relaxing night.