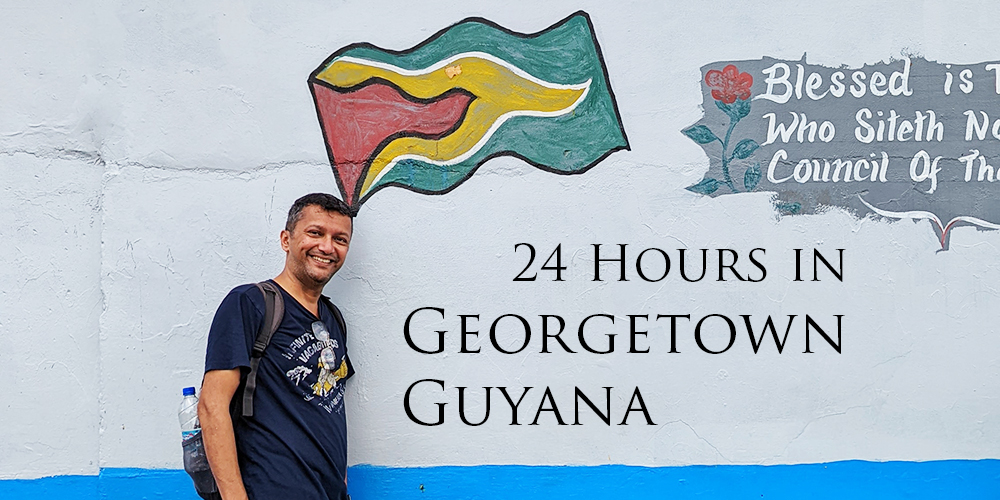 Georgetown is the capital city of Guyana, a country that borders Brazil to its south, Venezuela to its west and Suriname to its east. Located just north of the equator, Guyana has a tropical climate, and Georgetown being at the Caribbean Sea, gets hot and humid with temperatures remaining constant throughout the year.

Georgetown is a small city with a population of less than 150,000 people. The city is divided in to different neighborhoods, and all the main sights to see are located in the western part of the city along the Demerara river.

If you’re spending a day in Georgetown, then you should be able to visit all the sights by walking, well… almost all of them! Some of the best restaurants (see below) are located away from the bustling center, but there are still a lot of cheap food options in the city center.

Here are some of the sights to see and things to do in Georgetown, Guyana in one day:

Start your ‘walking tour’ by taking a taxi to ‘Bandstand’ – which is the northern-most area lining the seawall.

Muddy waters of the Caribbean Sea slaps the northern shoreline of Georgetown, and hits the Seawall. A 280-mile (about 450 km) wall that runs along much of Guyana’s coastline, protects settlements in the coastal areas of the country, most of which are below sea level at high tide.

Narrow, sandy ‘beaches’ provide a little bit of the gap enjoyed by some locals on weekends, before the high tide sets in and covers that area. Walking on the walls is a fun past-time by kids and adults taking in the much=-needed breeze, especially during the sunset hours. Colorful murals with political and social messages are painted across the wall, that also includes advertisements! 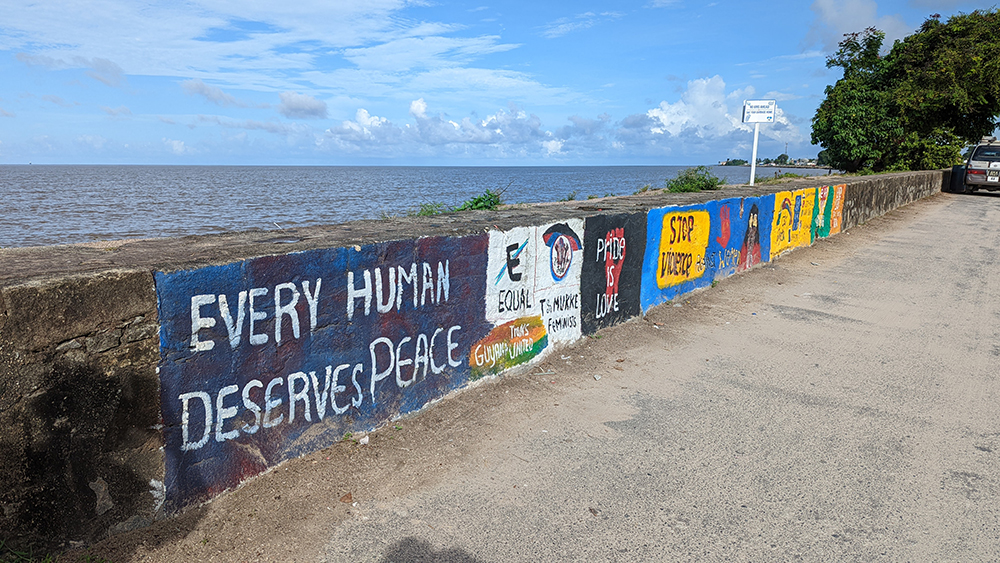 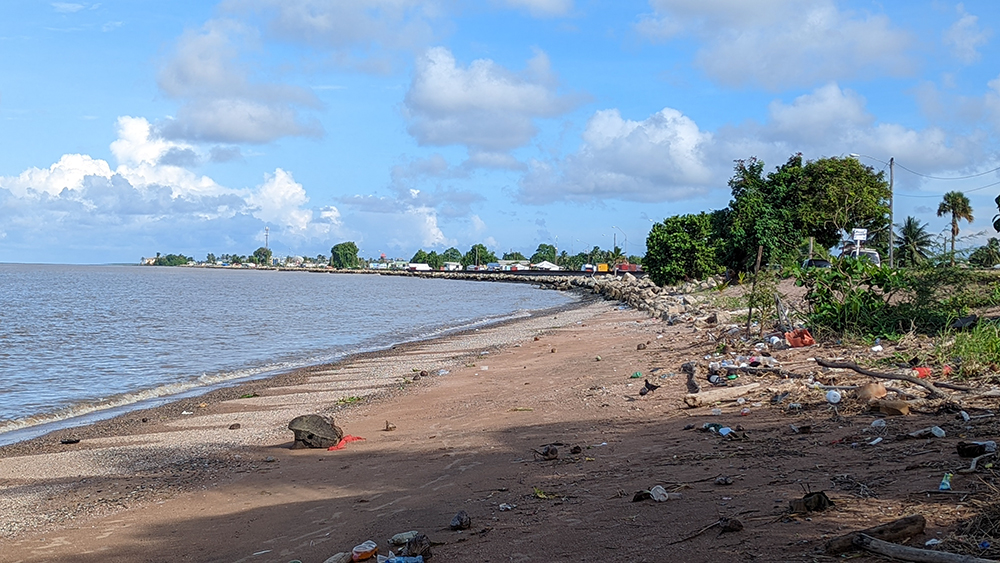 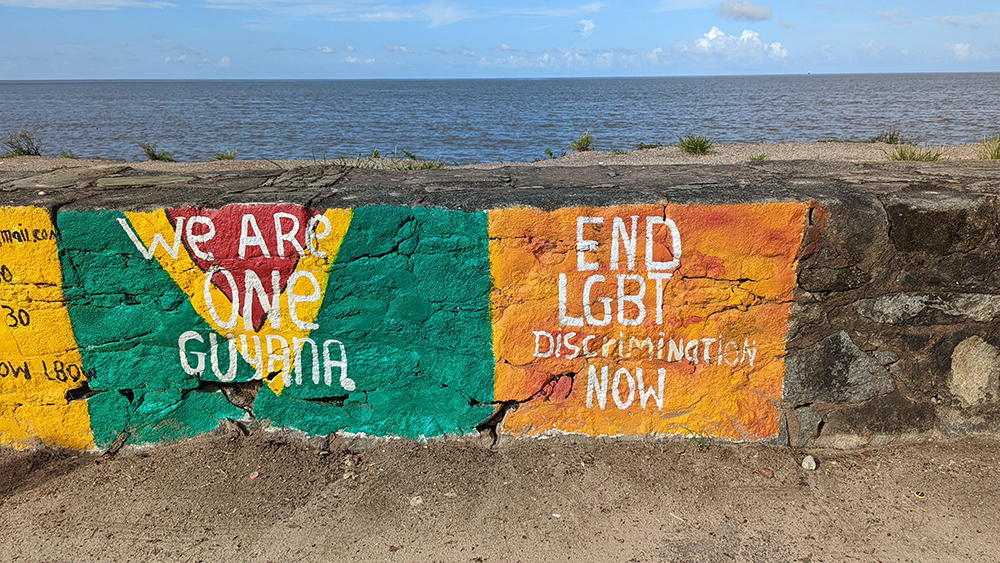 Just a short walk from the Bandstand is the lighthouse – built by the Dutch in early 1800s, this 31 meter (102 feet) high octagonal structure is a famous landmark with its distinct vertical red and white stripes. Generally, you can go up to the top for 400 GYD, but it was closed at the time of writing due to the Covid-19 pandemic. 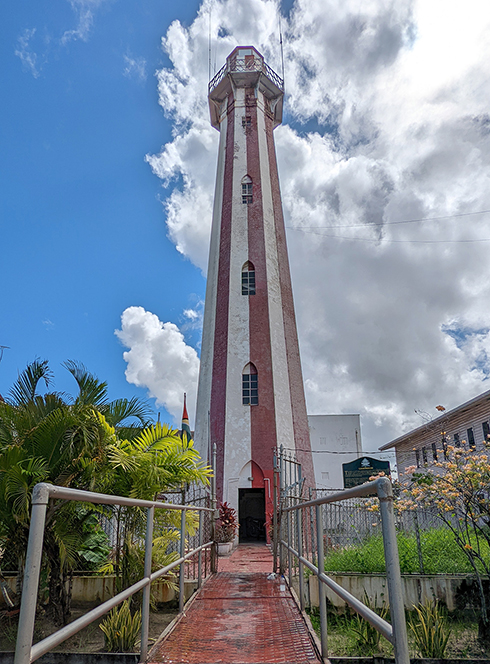 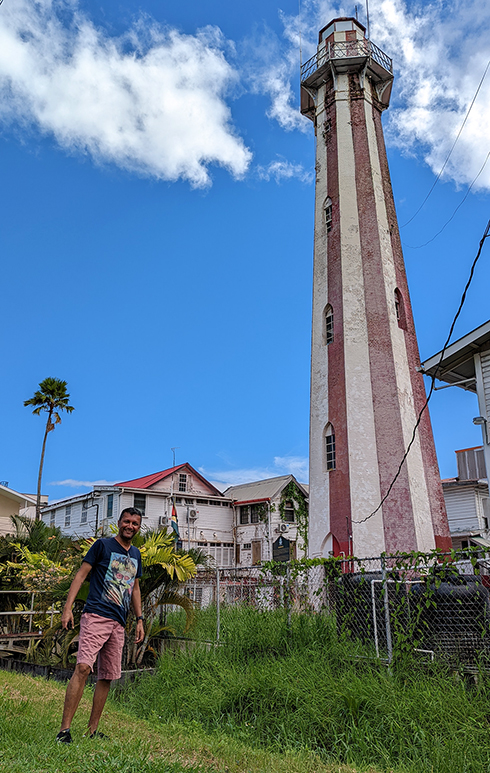 From the lighthouse, walk east along Wright lane, over to Carifesta ave to the National Park. Mainly used for cultural, educational and recreational activities, this park occupies approximately 0.23 kms (57 acres) and is home to several monuments. Two main places to visit in the park are:

Children’s Millennium Monument can be seen clearly from Carifesta Ave. The Monument was unveiled in 2000 and was designed by architect Michael Hahn. It symbolizes the development, strength and growth of all children of all races in Guyana. 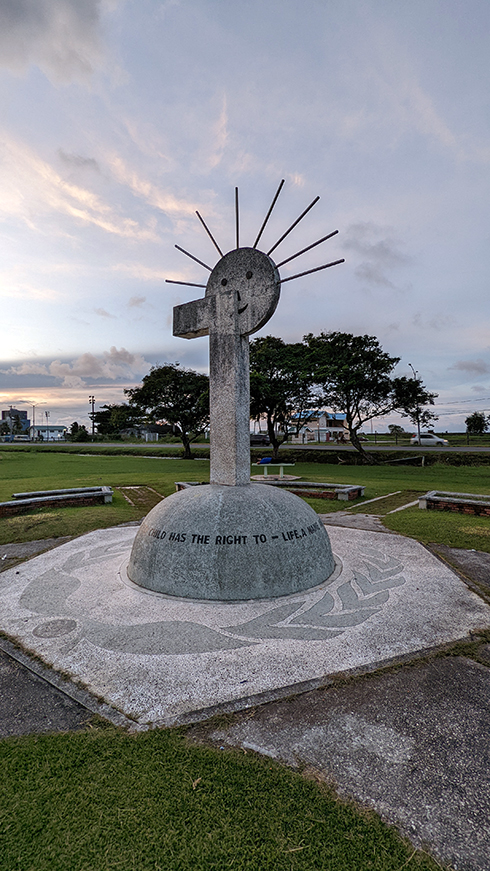 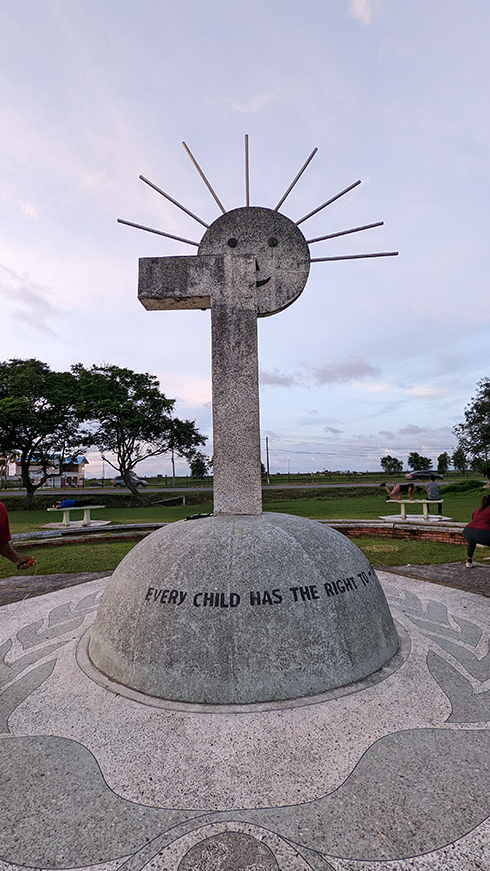 The Manatee Pond is located close to the Children’s monument, where you can feed grass to the Manatees roaming the edges of the pond. Just pluck the grass from around the pond and wave it on the surface of the water until the plumpy beasts rise slowly from under water to feed. They spend most of their time under the water but sometimes, if you’re fortunate, they would raise up and you would be able to see their entire face and back. 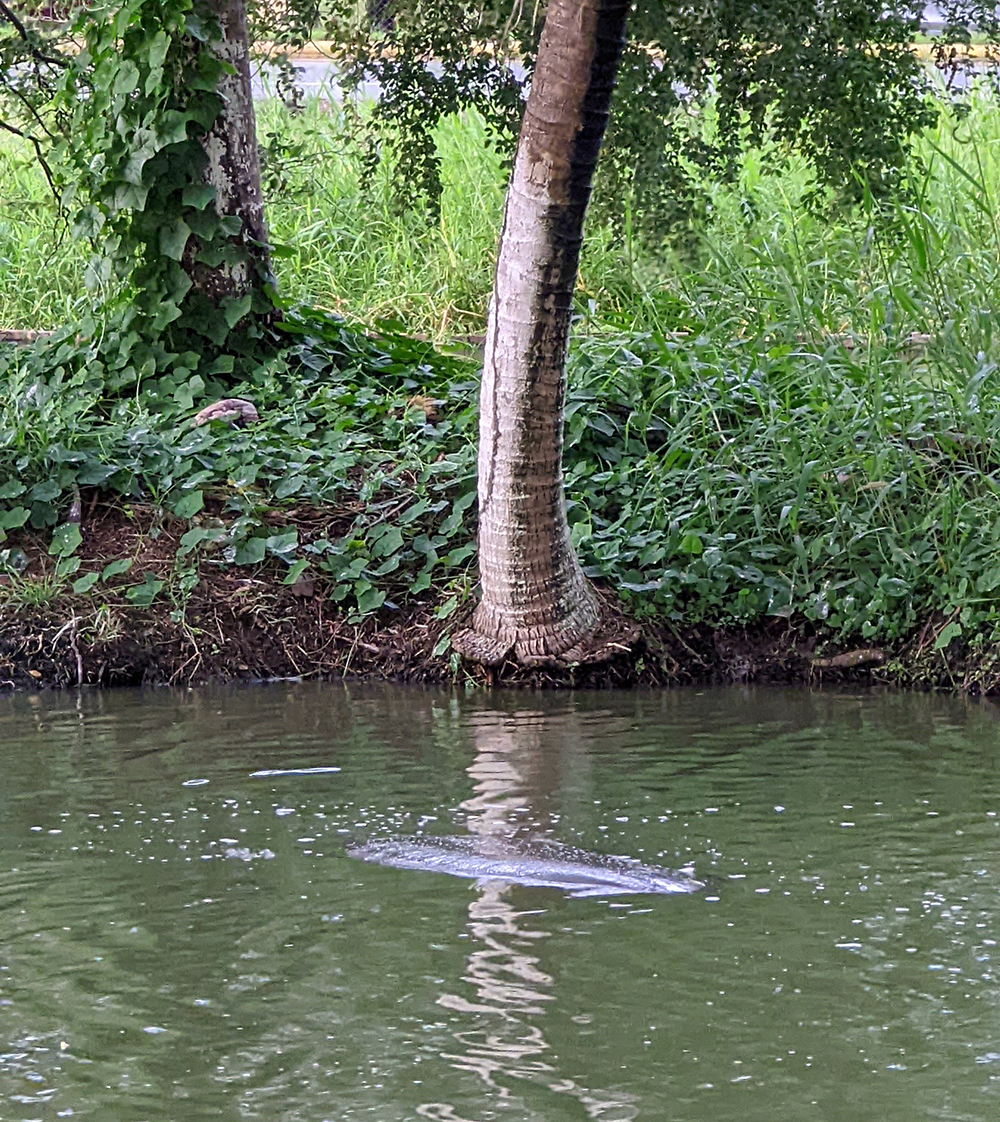 From the south side of the National Park, take a taxi (costs about 500 GYD) to St. George’s Cathedral. Said to the world’s tallest freestanding wooden building at a height of 143 feet, this is the main Anglican Church in Guyana. Over the top of the Alter you will notice a Candelabra donated by Queen Victoria, which was later electrified. The intricate stained glass windows and the many scrolls on the walls depicting a great part of Georgetown’s early history. 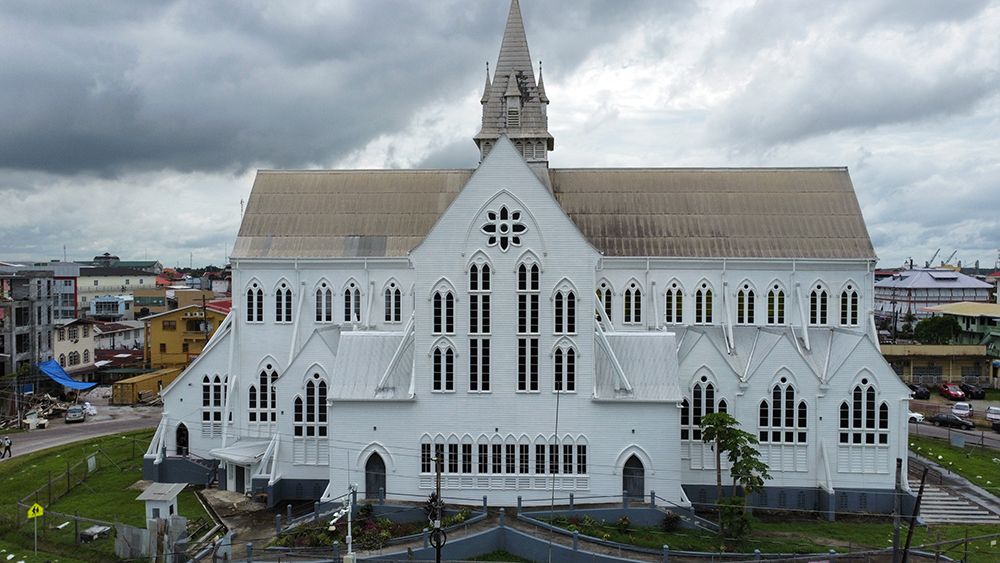 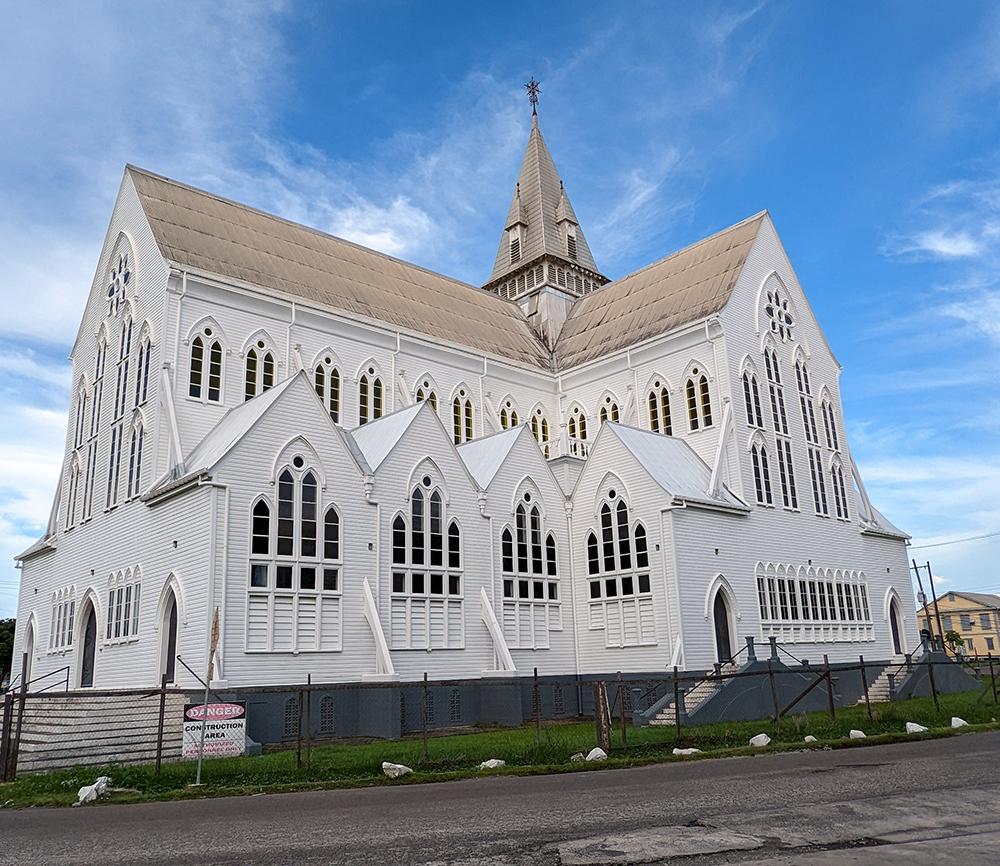 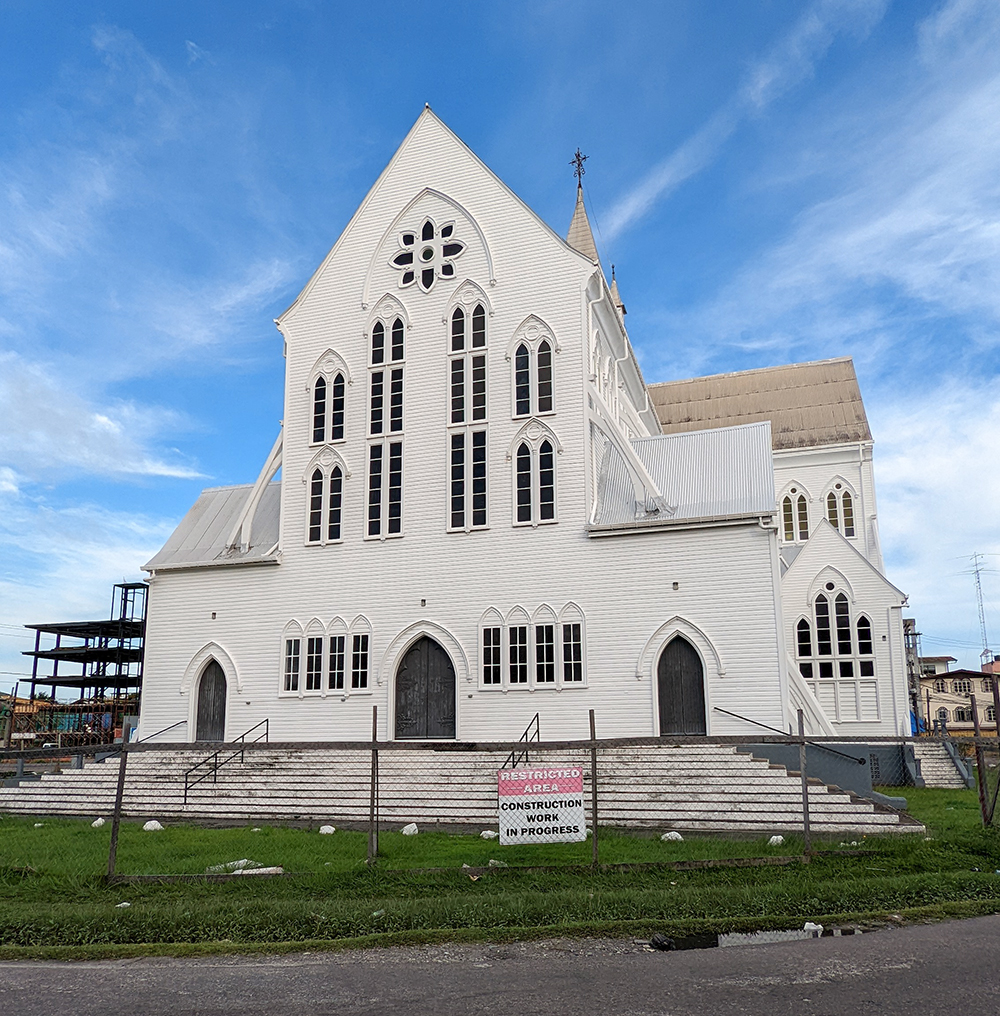 Walk over to the ‘Ave of the Republic’ from Regent street and around the corner is the Monument Non-Aligned Movement. The monument commemorates the 1972 Conference of Foreign Ministers of Non-Aligned countries when it was held in Guyana, 8 – 11 August, 1972. The monument was unveiled by His Excellency, Mr. Arthur Chung, the first President of Guyana in honor of the founders of the Non – Aligned Movement: President Gamal Abdel Nasser of Egypt, President Kwame Nkrumah of Ghana, President Pandit Jawaharlal Nehru of India and President Josip Broz Tito of Yugoslavia; the leaders who initiated the conference of Afro- Asian countries. The four busts on the concrete plinth represent the four founders of the movement Nasser, Nkrumah, Nehru and Tito. There are made of bronze and the other of a plastic material. 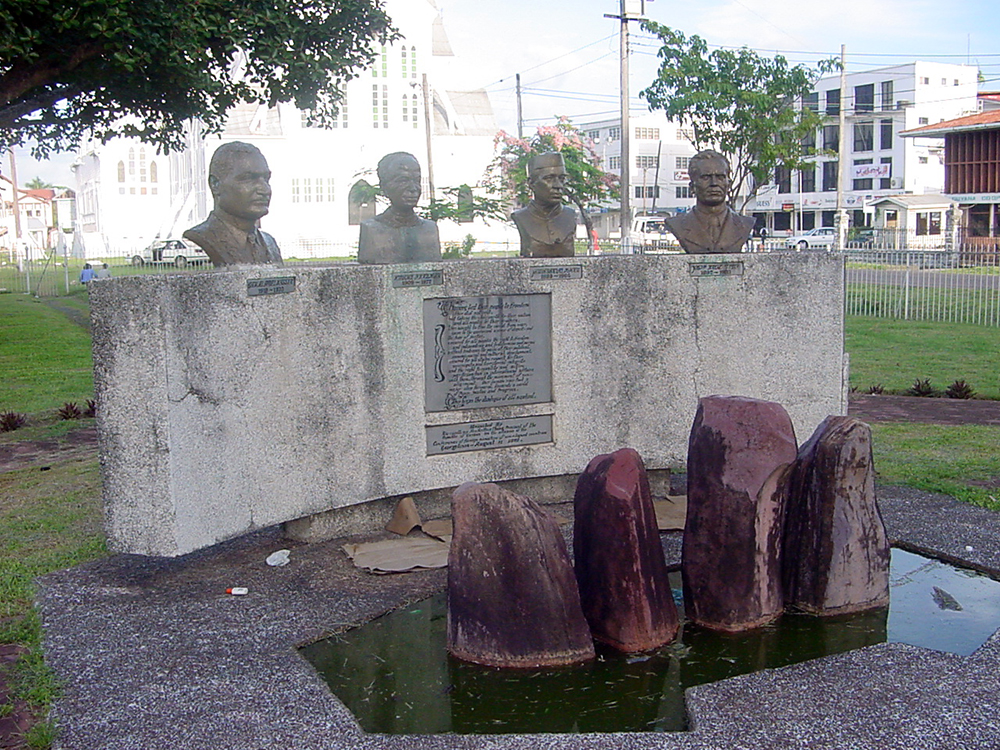 Continue walking on the ‘Ave of the Republic’ to find most of the government buildings. First stop is this 19th-century Gothic Revival building completed in 1889. We were told that it’s undergoing renovation at the time of writing. 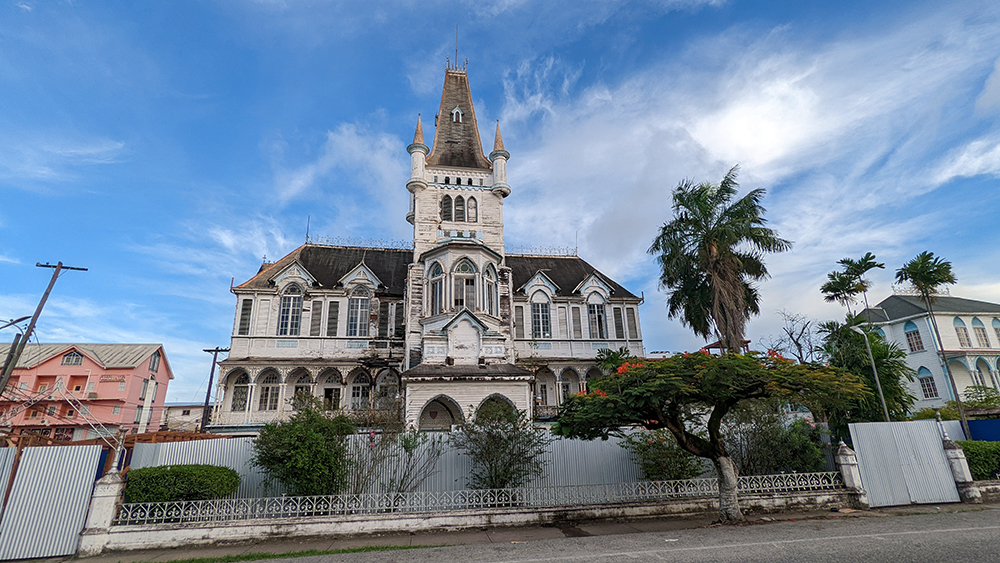 Taking up a whole block is the massive ochre colored building – Supreme Court of Judicature / High Court, with a statue of Queen Victoria in the center of the courtyard. 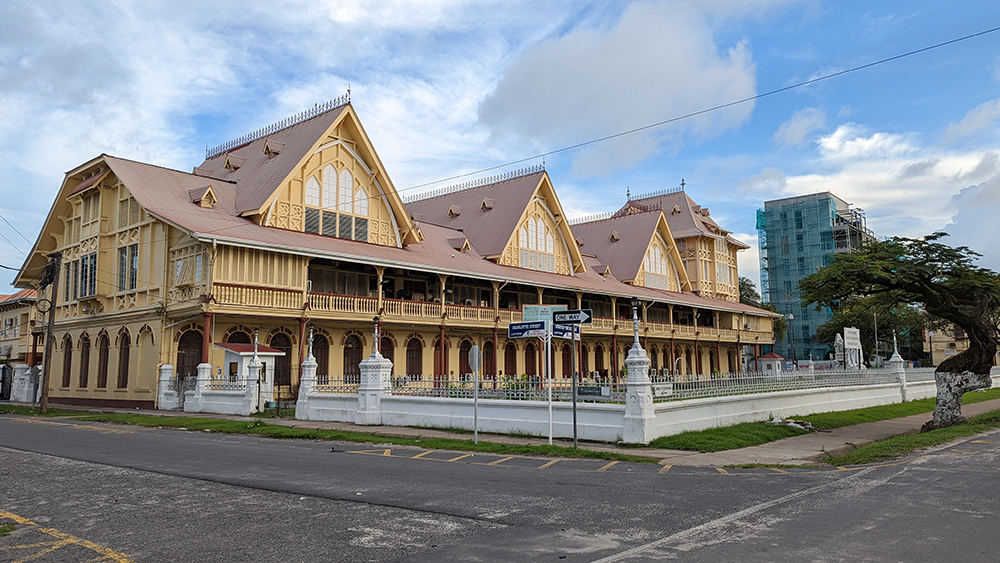 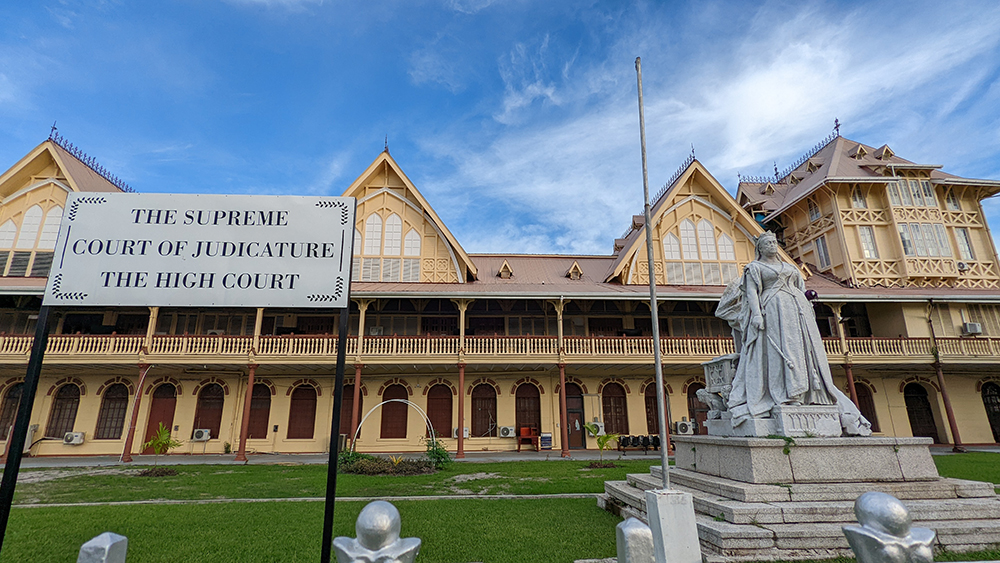 With the Dutch laying its foundations in 1811, St. Andrew’s Kirk is one of the oldest buildings in Georgetown that has been continually in use for religious purposes. 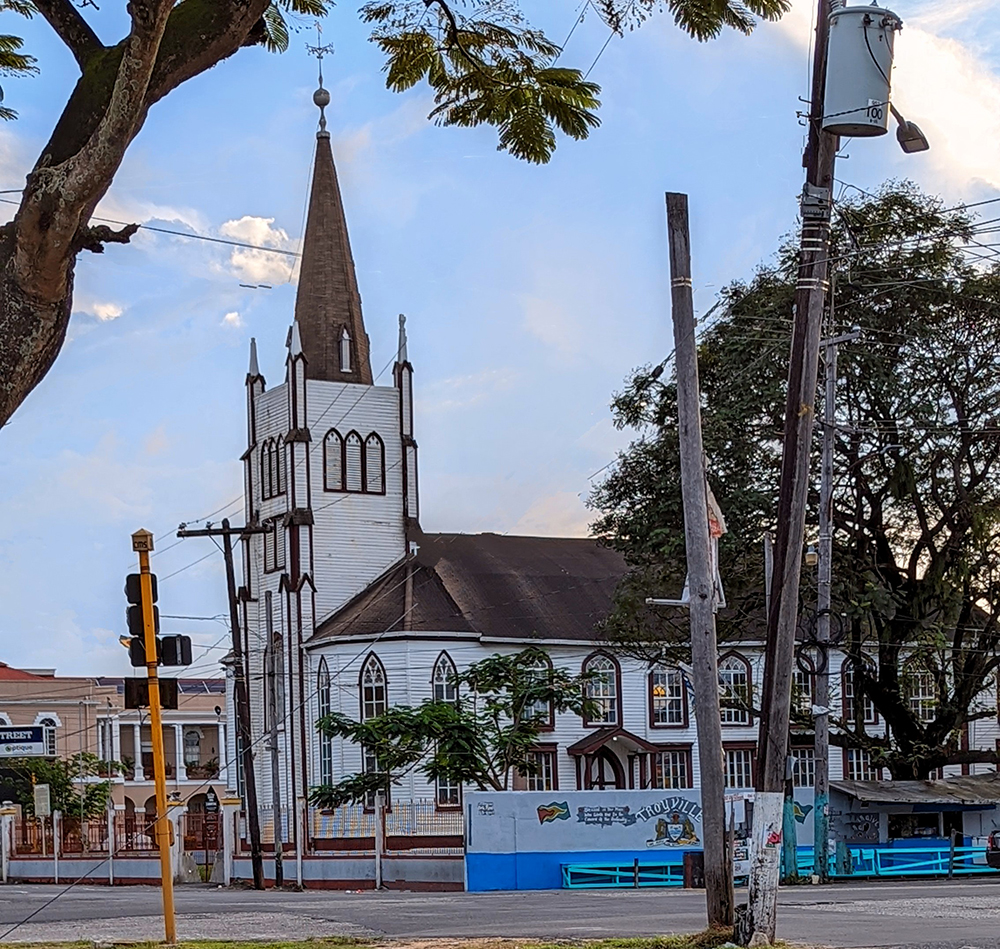 At the end of the street is the Parliament building of Guyana. You can enter the grounds and stroll around for pictures. The building has occasional tours when the building is not in session. Ask the attendant at the entrance for details. 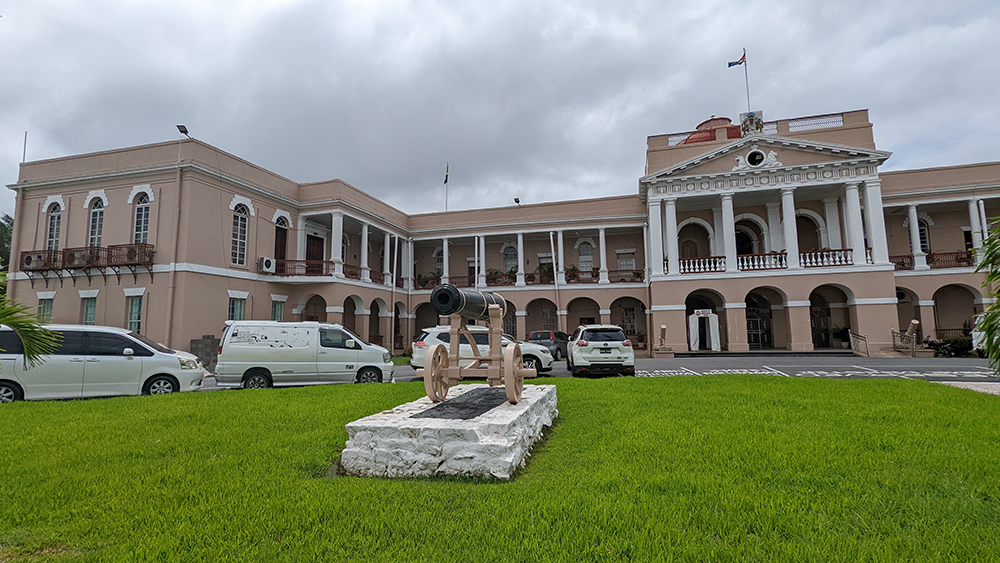 A public market since 1792 and renovated in 1842, the Stabroek Market is a hub of activity where almost anything can be bought. The narrow alleyways of this market has great stalls for quick bites and an ideal place for breakfast – from snacks to Indian street food like Vada Pav. Walk around the meandering shops and get your stocks of groceries or just stroll to check out the locals selling it all! 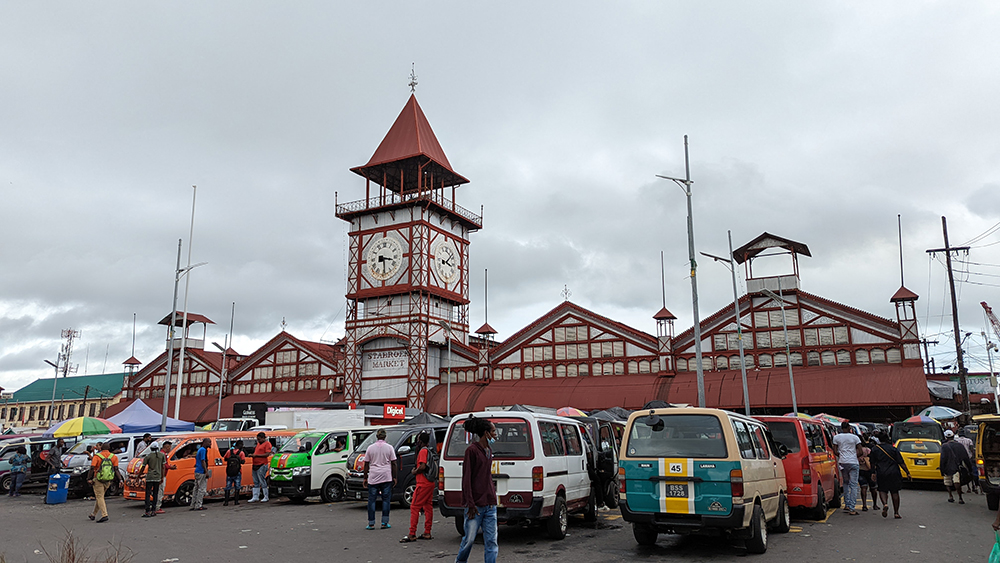 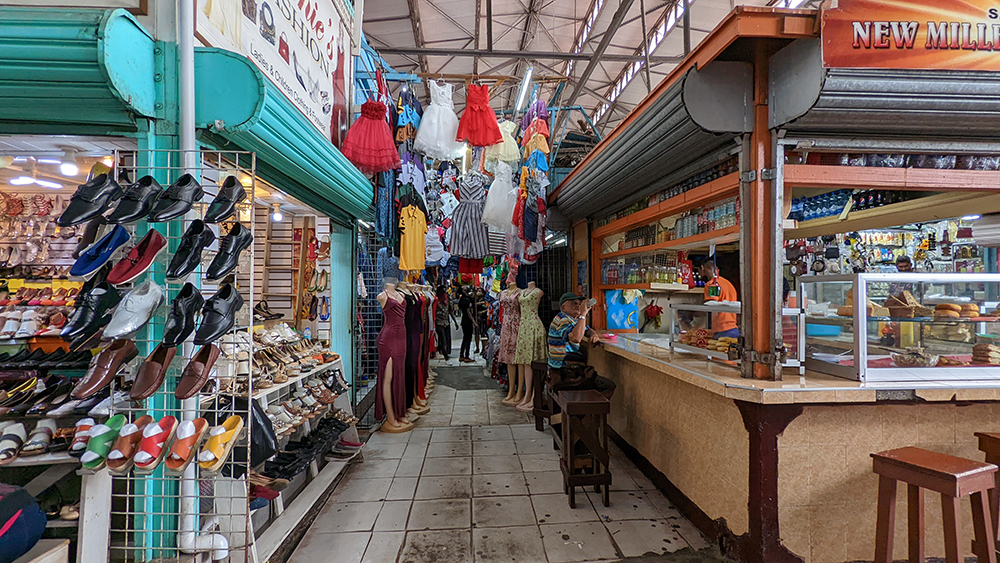 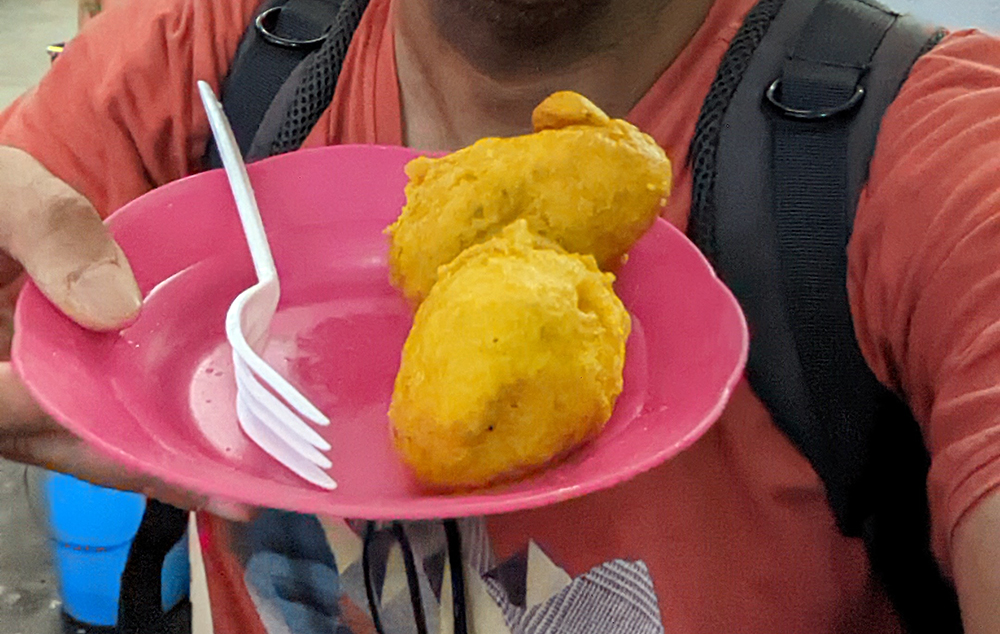 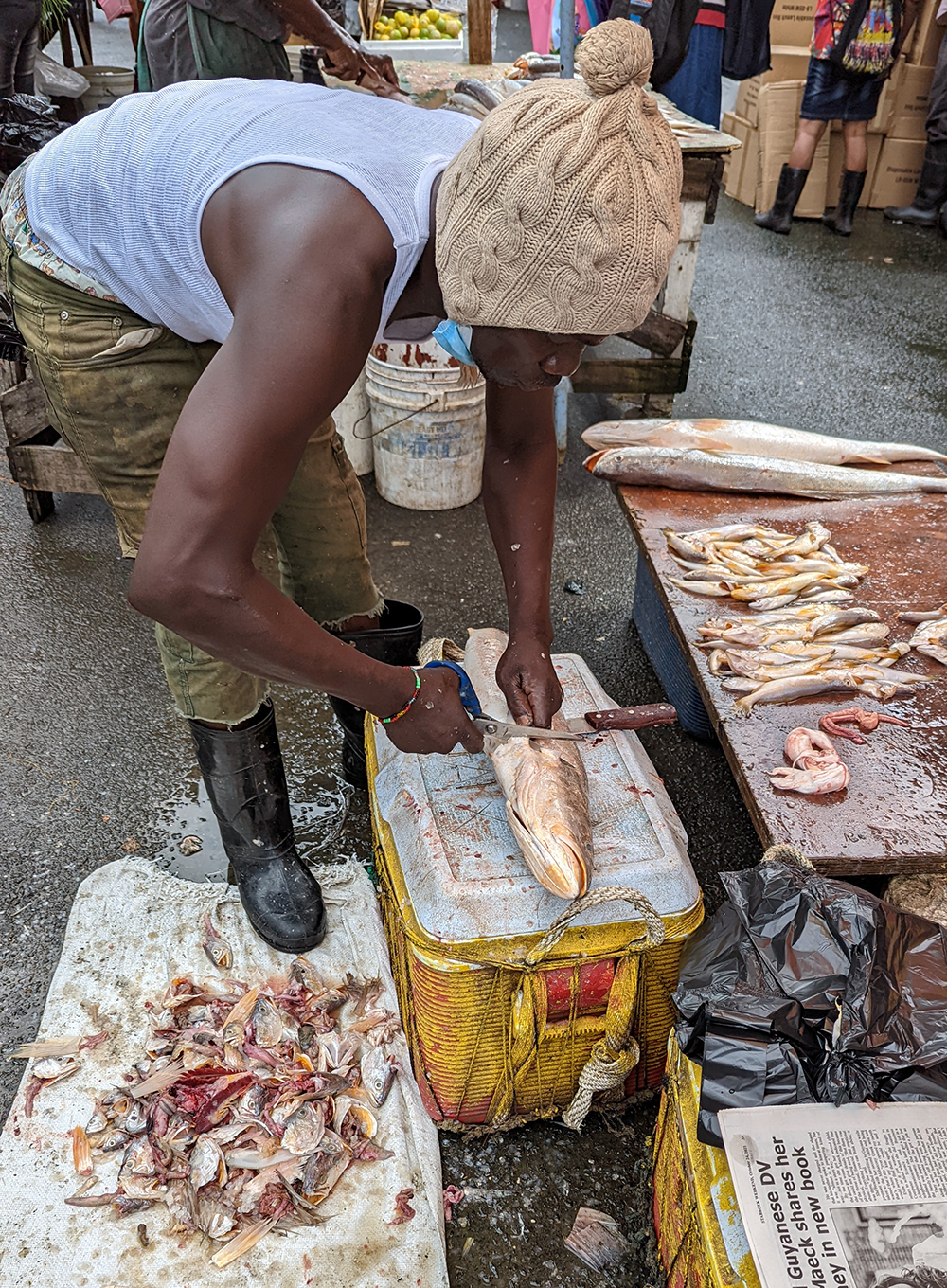 The 1763 Monument, known locally as Cuffy Statue, commemorates the Berbice Slave Rebellion of 1763, a major event in Guyana’s anti-colonial struggles.

On February 23, 1763, a slave revolt broke out in the Dutch colony of Berbice in what is now Guyana. At the time, the colony consisted of approximately 350 white colonists, 250 enslaved indigenous people, and almost 4,000 black enslaved people. Should a rebellion gain any traction, the colonial rulers would therefore find themselves in no small amount of trouble. And that’s exactly what happened.

At the Lilienburg Plantation, a house enslaved person named Cuffy (variously Coffy, Kofi or Koffi) of West African origin joined the revolt. He became the leader of the rebellion, training the rebel forces to fight as a unit against the Dutch militia.

Despite taking control of Berbice, Cuffy and the rebellion were ultimately undone by internal conflict. Cuffy had selected a man named Akara as his deputy, but Akara was a more aggressive leader and disapproved of Cuffy’s attempts to establish a truce and make terms with the Dutch. Akara formed a group to oppose Cuffy, and when Cuffy lost he took his own life. About a year after the start of the rebellion, troops from neighboring French and British colonies arrived to assist the Dutch and the rebellion was defeated.

Despite this defeat, Cuffy became a national hero of Guyana, and a symbol of the fight against colonial powers. In 1976, to celebrate the tenth anniversary of Guyana’s independence, a statue of Cuffy was unveiled on the Square of the Revolution in the Guyanese capital of Georgetown. The statue is officially called the 1763 Monument, but is often referred to as the Cuffy Monument.

The statue, which stands at 15 feet tall and weighs two and a half tons, was designed by Guyanese sculptor Philip Moore and cast in England by the Morris Singer Foundry.

The figure of Cuffy bears many symbols: his pouting mouth is a sign of defiance; the face on his chest is a symbolic breastplate giving protection in battle; and the horned faces on his thighs represent revolutionaries from Guyanese history, including Quamina from the Demerara rebellion of 1823. In his hands he holds a pig and a dog, each being throttled, the pig representing ignorance, and the dog covetousness and greed. 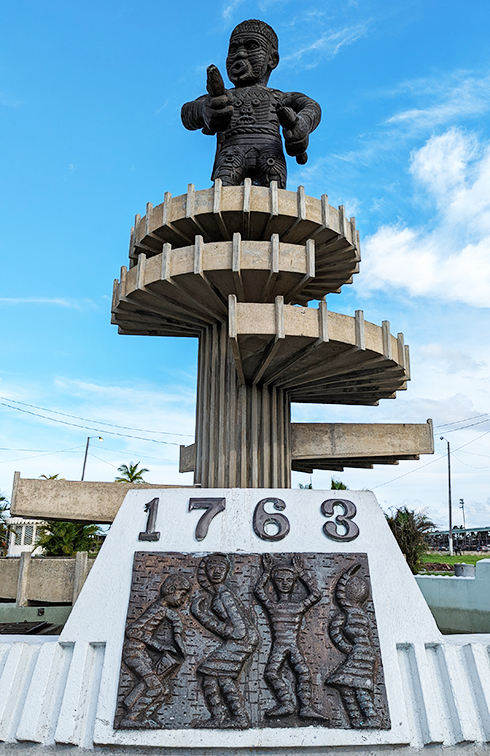 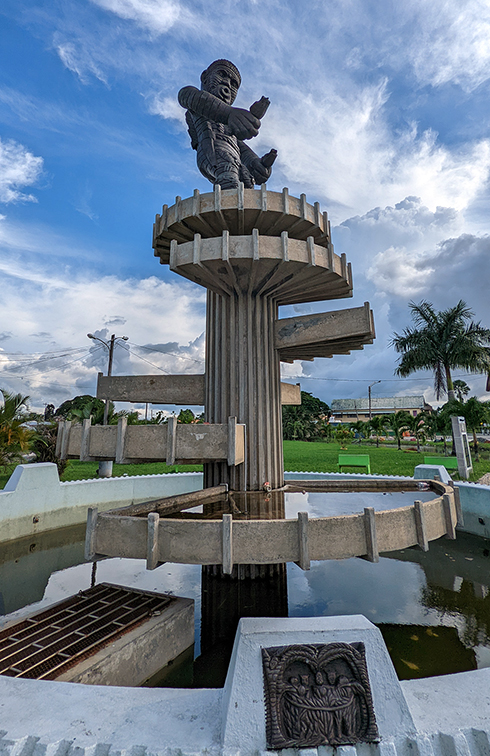 Spanned over a huge area, the botanical gardens of Georgetown is a great place for a stroll. Check out the crocodile and manatees in different pools around the gardens. These gardens have a huge variety of tropical flowers and one of the finest collection of palms, as well as lilies, the national flower of Guyana. 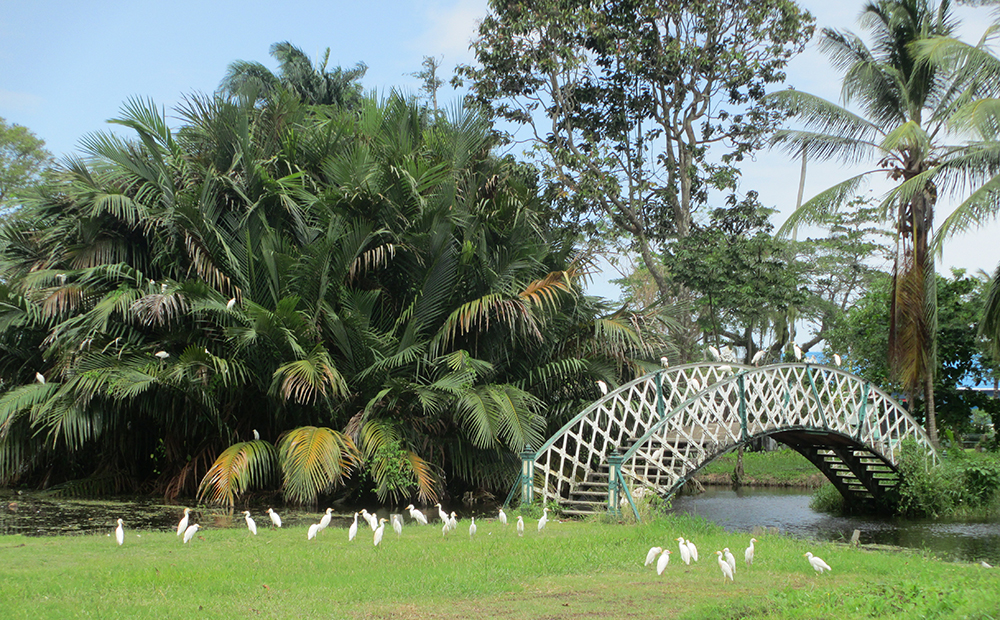 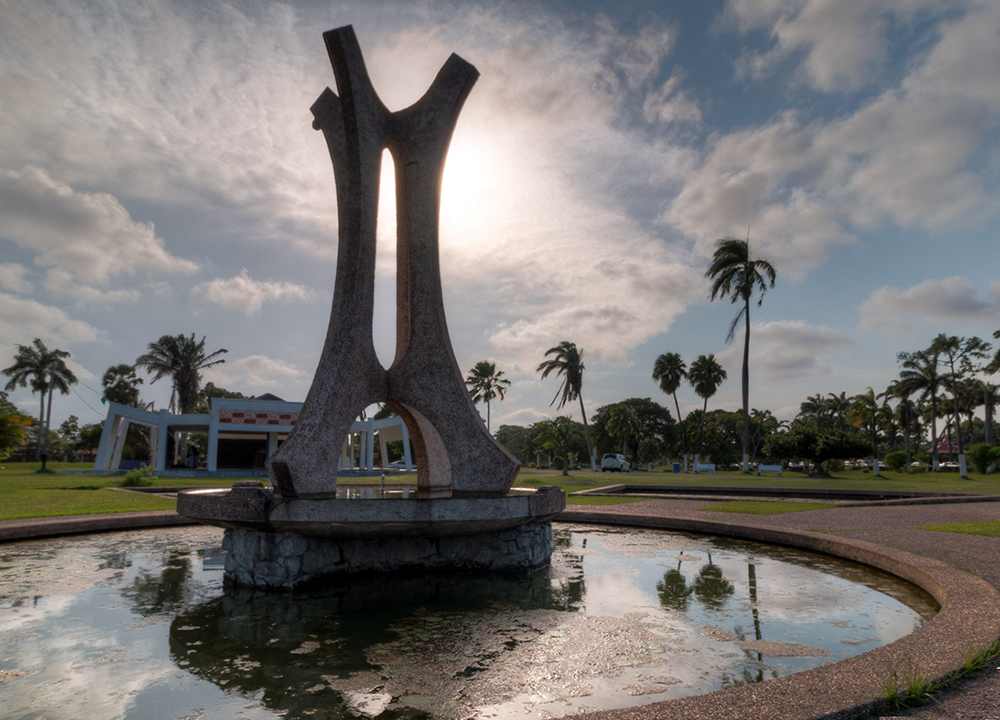 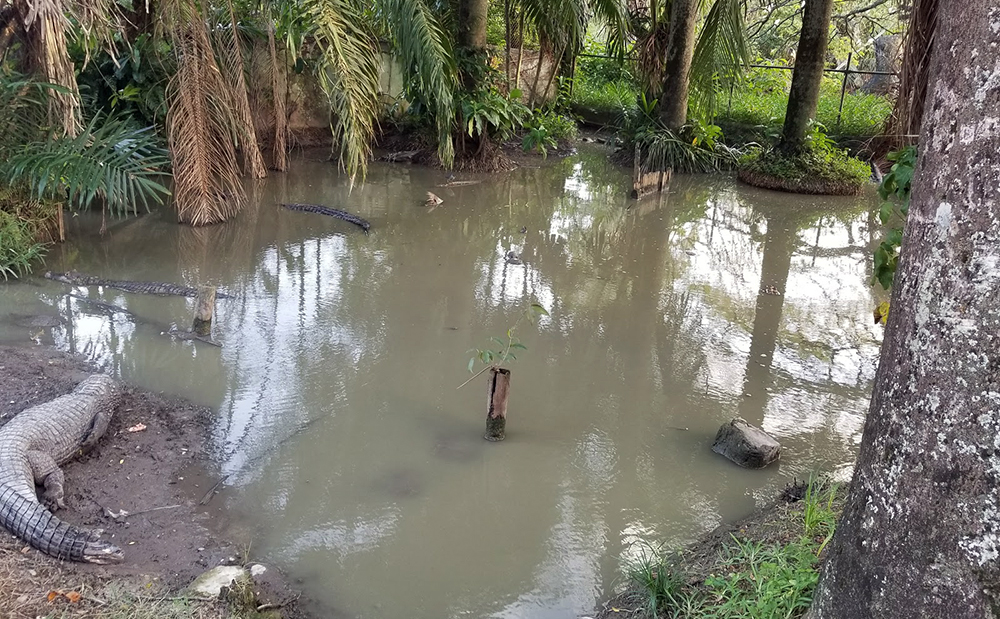 Located in the city center, just 5 mins walk from Stabroek Market, this restaurant serves one of the best Guyanese-Indian food in the town. The prices are cheap and good-size portions will definitely fill you up.

The restaurant (Link: Instagram) has a very vibrant and tolerant (LGBTQ+ friendly!) atmosphere with great music and super-friendly staff. The tacos are delicious and they offer shisha (hookah) as well. I ordered the “two tacos + drink” from the menu that costs 2200 GYD ($11), along with a hookah that costs 4500 GYD ($22.50). It’s a great place to chill out and it can get really busy after 9pm!

One of the best Indian restaurants in the city serving delicious curries and tandooris. Located far off from the city center to the east, you can call them and order food for delivery to your location.

Testing for Covid-19 is important and required for any international travel. It can be easily done in Georgetown with a lot of places around the center of the town. The cheapest and reliable one is New Vision Labs.

Results are sent in email or can be picked up as a hard copy; or both.

Top 7 Whale-Watching Destinations in the World »