One of the upcoming capitals in Europe is Tirana, capital of Albania. Well known for its Ottoman-era and Soviet-era architecture, Tirana is the beating heart of Albania, with its new cafe scene among Italians and other east European nations, Tirana has a lot to offer in terms of sight seeing and with day trips to nearby UNESCO World Heritage town of Berat, a lot of travelers around the world are exploring this wonderful city.

If you find yourself in Tirana then you can see most of the main attractions within a 2-3 hour walk. Apart from the two other sites – Bunk’art and Dajti mountain – which are also covered at the end of the tour below, Tirana’s attractions revolve around the center of the city, also known as Skanderbeg Square.

So let’s get started. Here’s the map of the route you’ll be taking.

A. National Opera & Ballet Theater
The obvious point to start any tour of Tirana is the Skanderbeg Square, the central point of Tirana and often a meeting place for anyone. This is a huge square that, unlike any other European capital cities, is not lined up with cafes & restaurants. You won’t find any souvenir shops as well. The square has an equestrian statue of Albania’s national hero, Gjergj Kastrioti Skënderbeu. With its 40,000 square meters area, the monument of Skënderbeu stands tall and prominent, along side some of the treasures of Tirana like Opera & Ballet Theater, National History Museum, Tirana International hotel and a few other monuments. 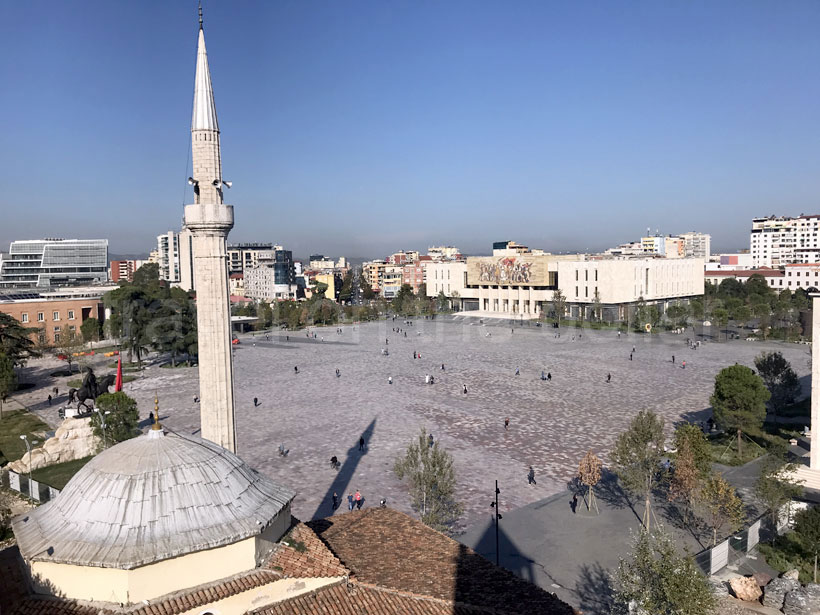 The National Opera & Ballet Theater (Teatri Kombetar i Operas dhe i Baletit) hosts many music ad dance events throughout the year. Check their website for upcoming events and tickets can be bought at the door. 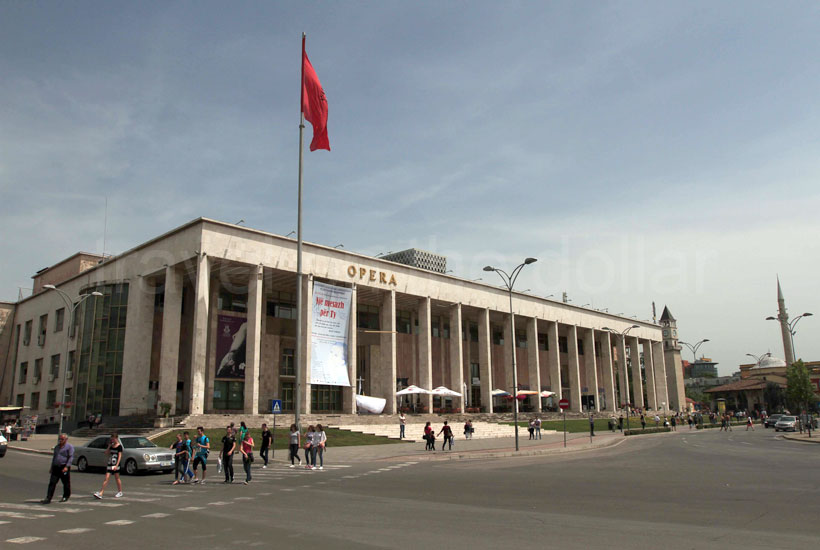 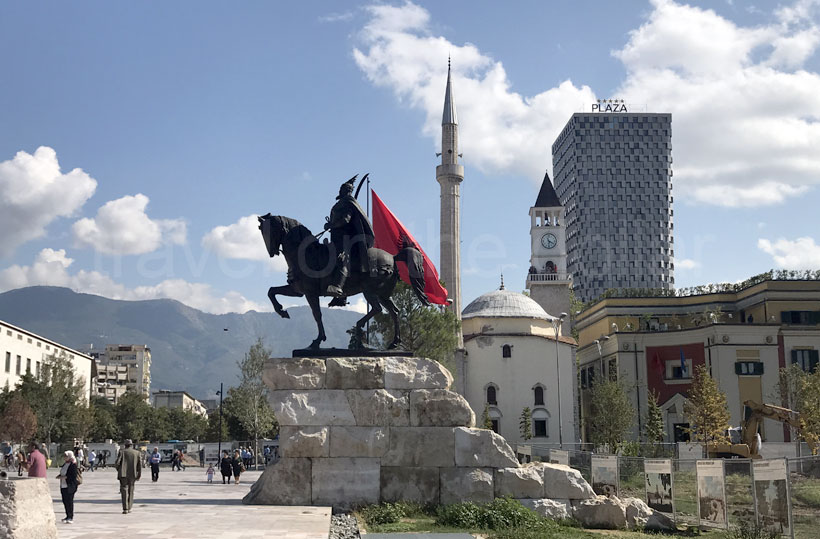 B. National History Museum
One of the highlights of Albania is the National History Museum located in Skanderbeg Square. The large mural mosaic titled The Albanians above the museums entrance cannot be missed. This mural depicts purported ancient to modern figures from Albania’s history. The Museum has eight pavilions – the Pavilion of Antiquity, Middle Ages, Renaissance, Independence, Iconography, National Liberation Antifascist War, Communist Terror, and Mother Teresa.

All these pavilions list the history of Albania throughout its time. Although photography is not allowed inside the museum, the staff was kind enough to allow me to take two pictures only! 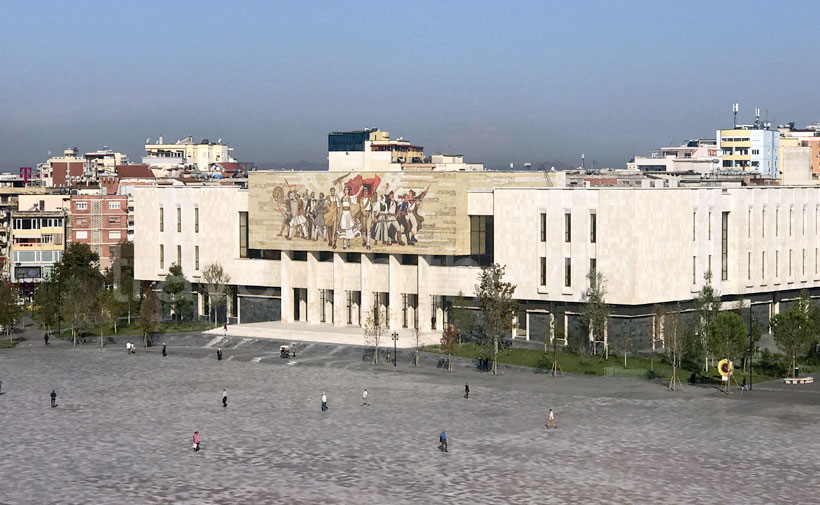 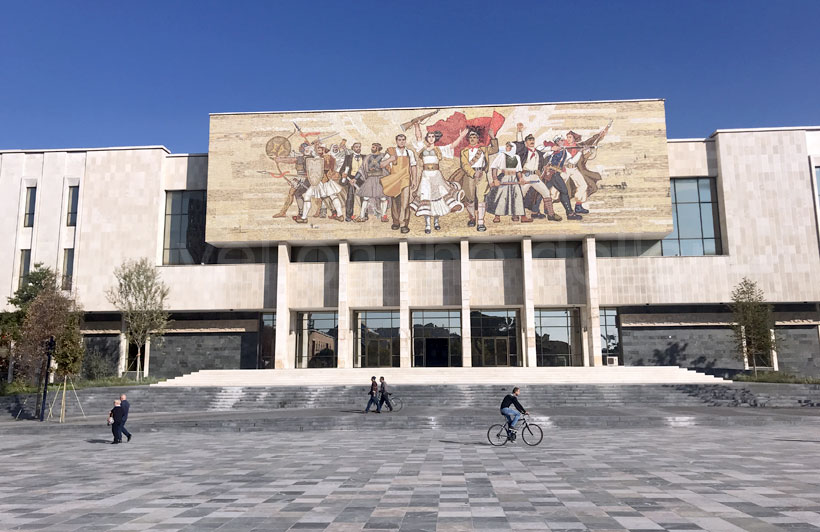 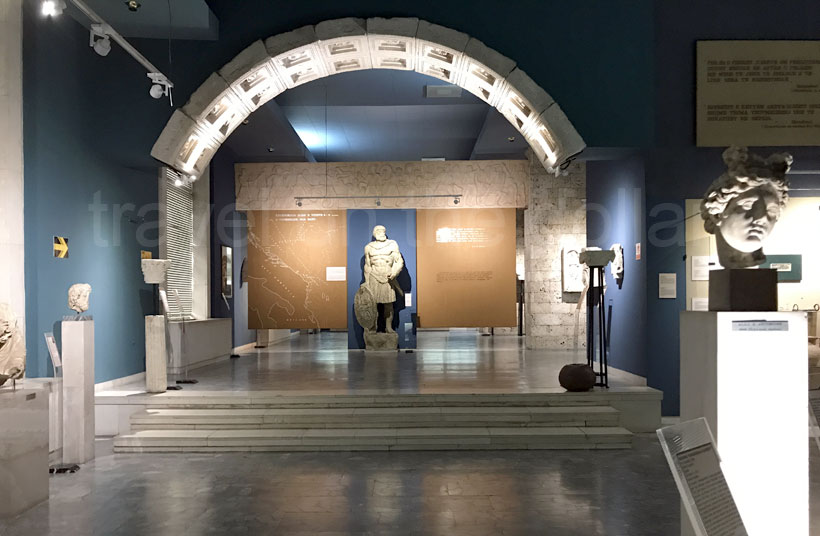 C. Et’hem Bej Mosque and Clock Tower
Construction of this gorgeous little mosque was started in the early 1790s by Molla Bey, a task that wasn’t completed for another three decades when the building was finally finished in about 1820 by his son, Haxhi Et’hem Bey. Closed under Communist rule, the building reopened as a house of worship on January 18, 1991 without the permission of the authorities. The colorful frescoes outside and in the portico depict trees, waterfalls and bridges, motifs rarely seen in Islamic art. Take your shoes off before entering.

Climb the 35m (115ft) Clock Tower next to the mosque for gorgeous views of the Skanderbeg Square. (Hours: Open Mon–Fri 8pm–3pm; Admission: 200 lek) 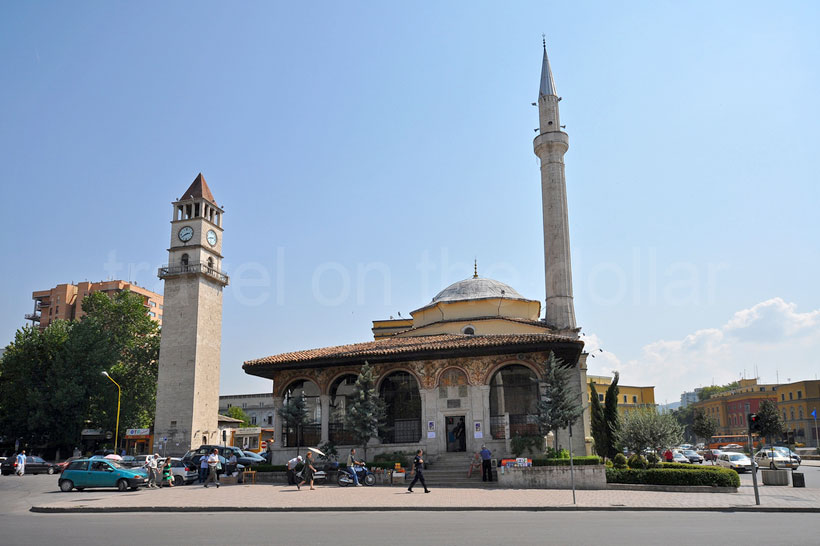 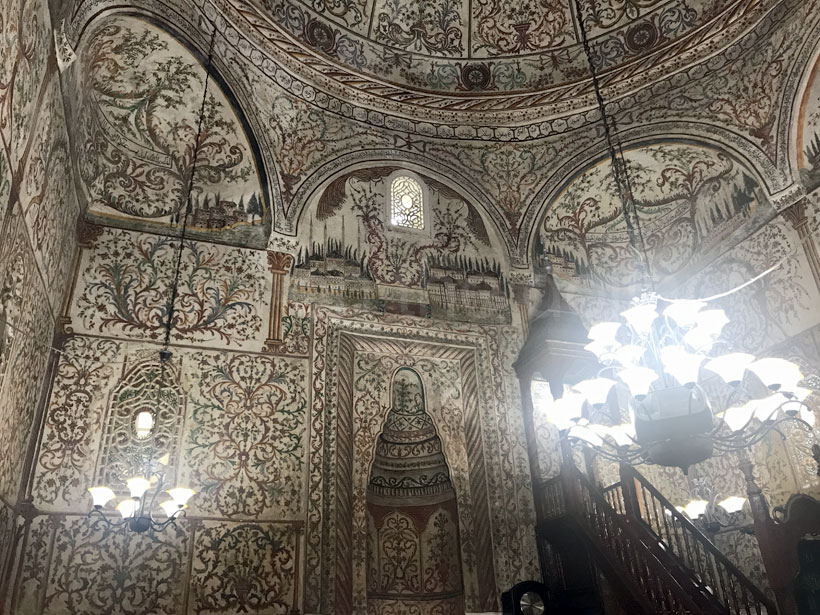 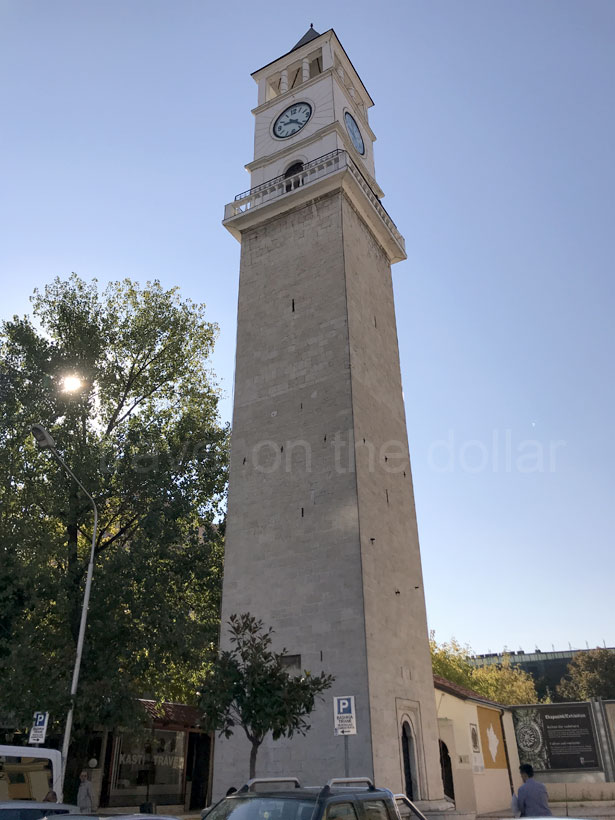 D. National Arts Gallery
Tracing the relatively brief history of Albanian painting from the early 19th century to the present day, this beautiful space also has temporary exhibitions. Downstairs there’s a small but interesting collection of 19th-century paintings depicting scenes from daily Albanian life, while upstairs the art takes on a political dimension with some truly fabulous examples of Albanian socialist realism. 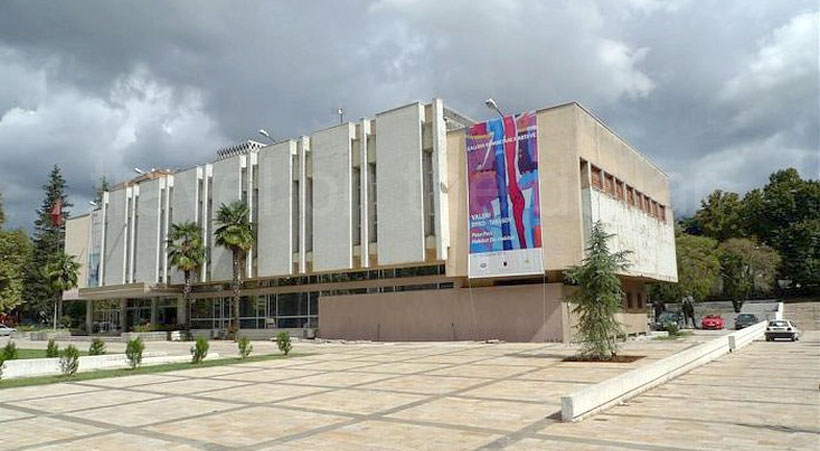 E. Tanners’ Bridge
An 18th-century Ottoman period stone footbridge, built near the Tanners’ Mosque, was once part of the Saint George Road that linked Tirana with the eastern highlands. The road was the rout by which livestock and produce entered the city. The bridge crossed the Lanë stream near the area where butcher shops and leather workers were located. The bridge fell into disrepair when the Lanë was diverted in the 1930s. In the 1990s the bridge was restored for use by pedestrians. 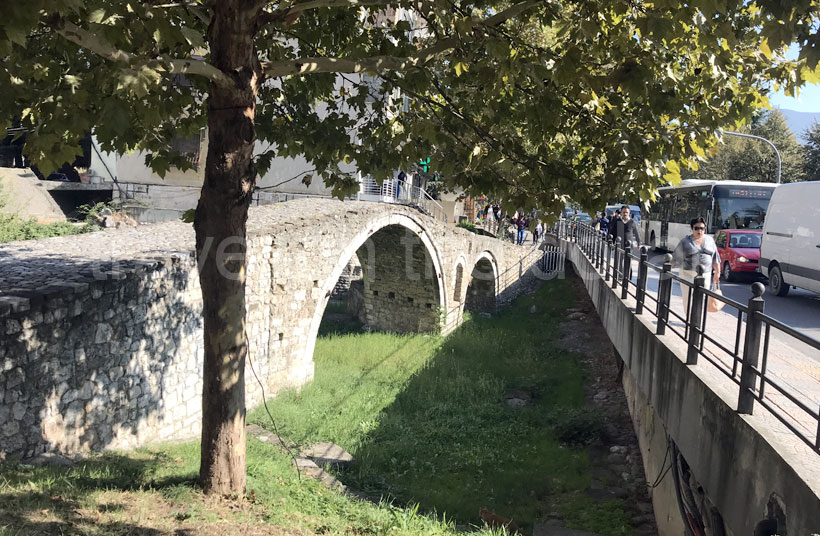 F. Saint Paul’s Cathedral, Tirana
Belonging to the Roman Catholic Archdiocese of Tiranë-Durrës, St Paul’s Cathedral doesn’t look much like a church from the outside, but the crucifix at the top is more than explicit. The most interesting feature of the church is its stained glass, particularly the one featuring John Paul II and Mother Teresa to the left of the front door. 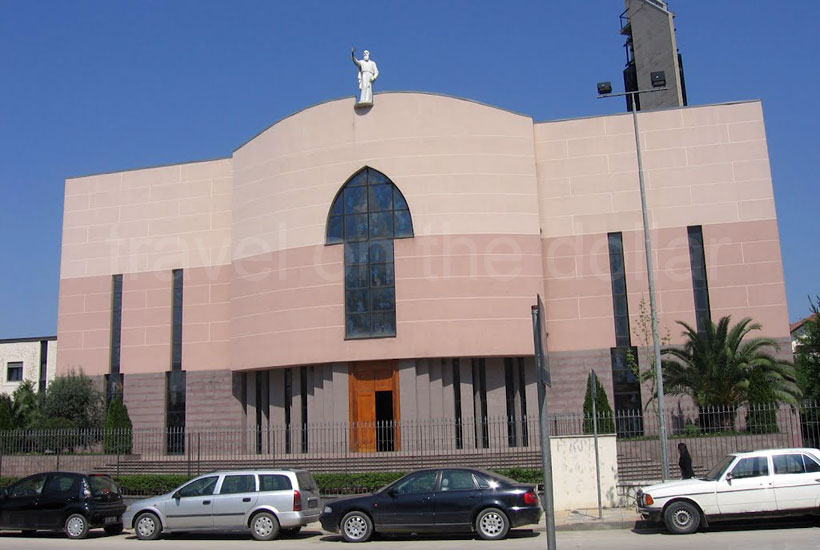 G. Pyramid of Tirana
Designed by Enver Hoxha’s daughter and son-in-law, The out-of-place pyramid was built as a museum in honor of the leader. It earned the informal name, “The Enver Hoxha Mausoleum.” The museum retained its original purpose until 1991, and as national attitudes began to change, the space was converted to a convention center in the first shift in purpose that would eventually lead to its downfall.

As the central purpose of the marble-tile-covered structure shifted from museum to convention center to military staging area to television station, the revolving ownership led to massive neglect. Combined with the unpopular Communist legacy associated with its construction, the building began being looted for materials and covered in graffiti, leading to its current state of dilapidation.

While the Pyramid of Tirana is not completely disused (there is still an independent Albanian broadcast company operating there), the government is trying to vote the site into demolition. However the vote is being contested by locals who would like to see the piece of their heritage (however dark) preserved. 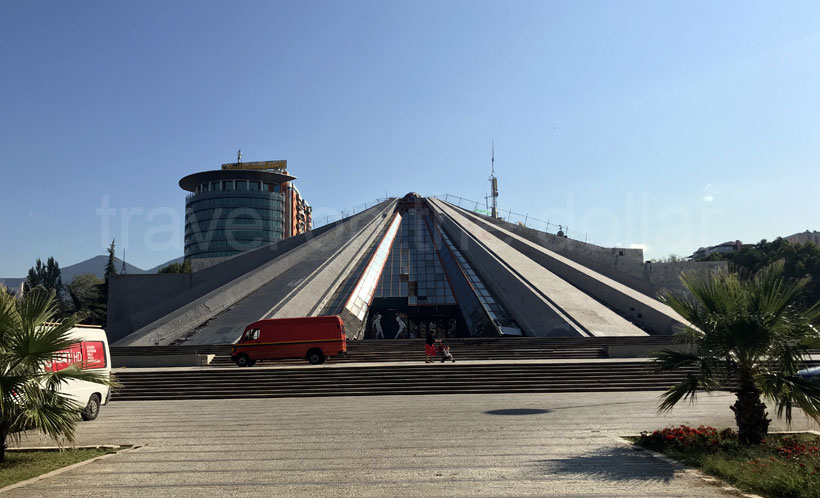 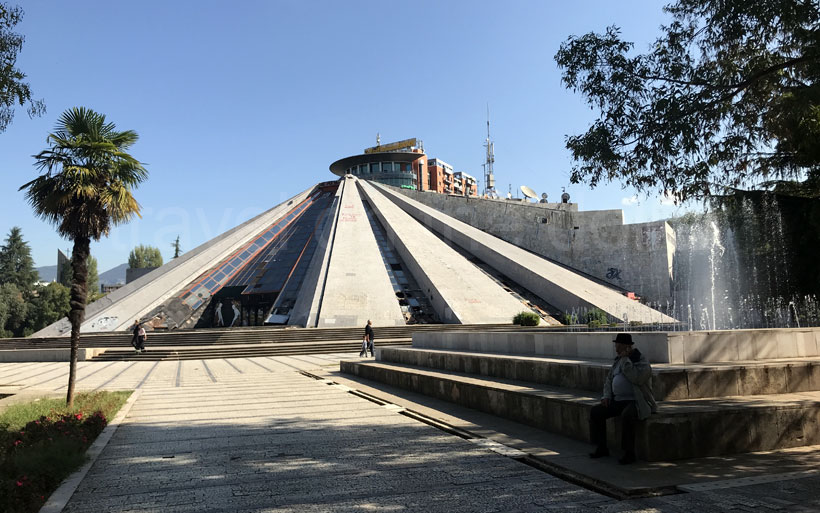 H. Postbllock Checkpoint & Berlin Wall piece
Postblloku (Checkpoint), or the Memorial to Communist Isolation, commemorates the country’s political prisoners who suffered under the Hoxha regime. Co-created by the former dissident Fatos Lubonja and the artist Ardian Isufi, the monument is made up of three main elements including one of the small concrete defensive bunkers that continue to litter the country, several concrete supports from the mine at the notorious Spaç labour camp where thousands of political prisoners suffered between 1968 and 1990 and a brightly painted section of the Berlin Wall from Postdamer Platz that once split Germany in two. 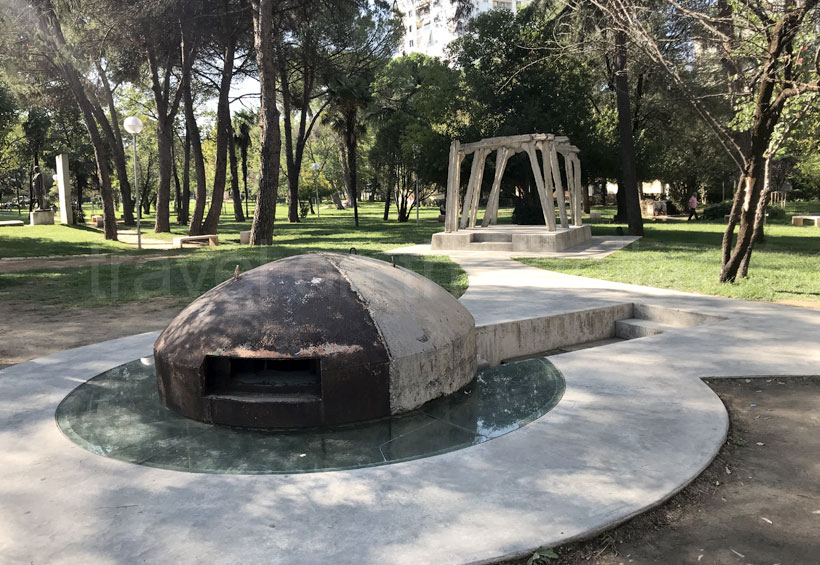 [Concrete bunker of the checkpoint or Postbllock] 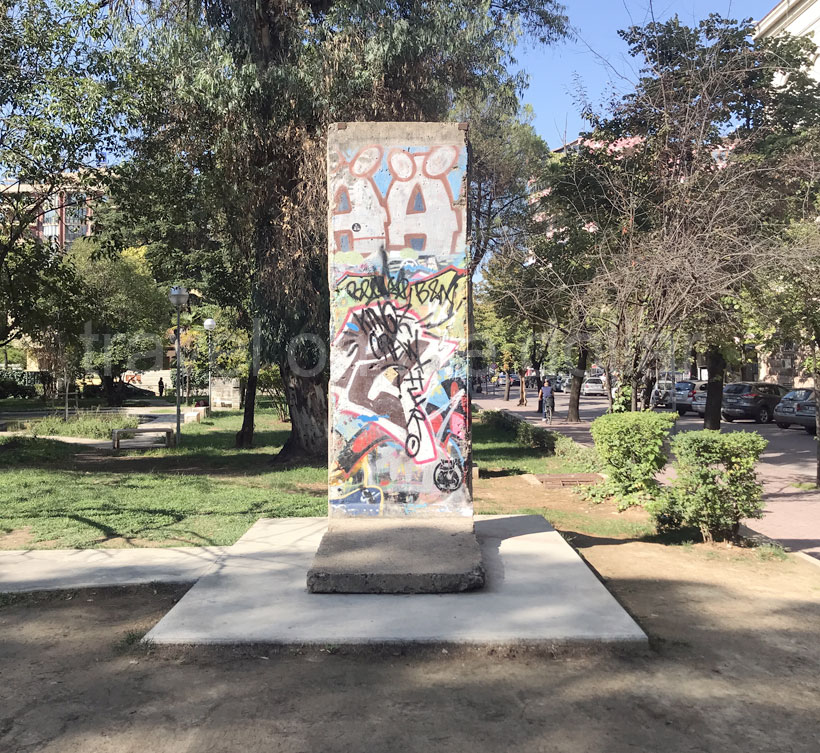 [Piece of Berlin Wall from the Potsdam Square in Berlin]

I. Enver Hoxha’s Former Residence
The former residence of Albania’s dictator, Enver Hoxha, is located in Blloku, a communist party neighborhood to which access for the general public was forbidden until 1990. After 1990, people flooded into this district to see what it looked like and also see the house where their leader had lived. This three-story house painted with pastel colors, apparently was not as luxurious as many had pictured! Today Blloku is a popular district with plenty of nightclubs, pubs, restaurants and shops.

J. Resurrection of Christ Cathedral
Unlike any other traditional Orthodox churches, this very modern structure is the third largest Orthodox church in Europe, took 8 years to complete and was opened in 2012. One of the more interesting aspects of the structure is the clock tower which is completely separate from the main building. This is in the design of four pillars which converge slightly towards the top where they cradle the clock, which is lit up at night. 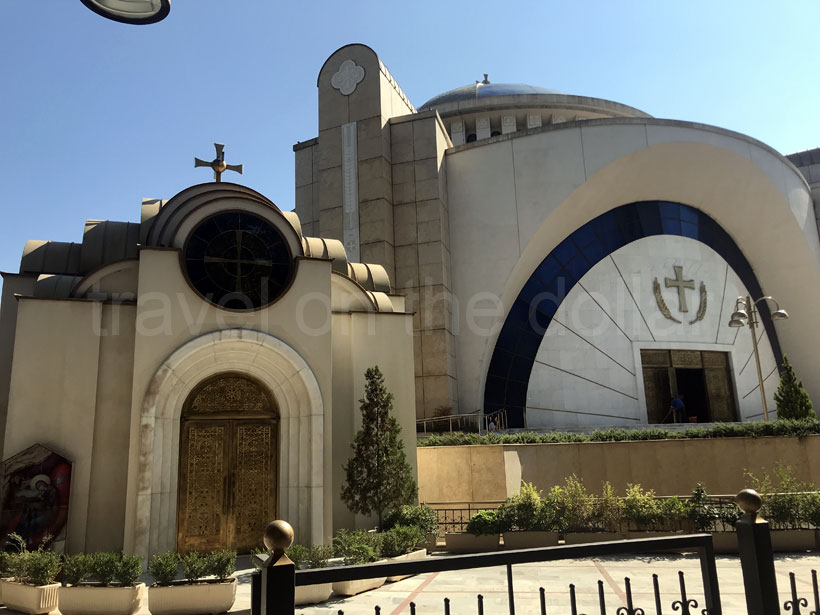 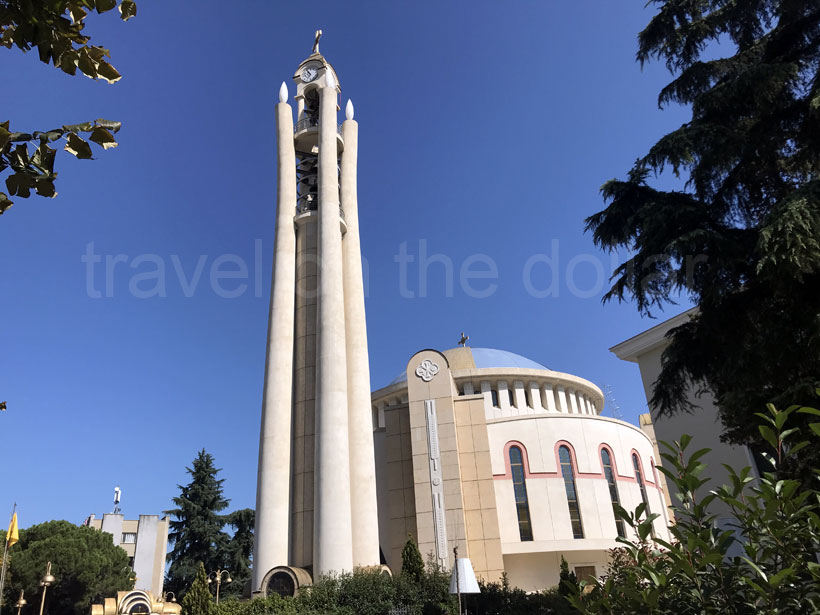 Bonus: Bunk’Art
With almost 3000 sq meters of space underground spread over several floors, this bunker was built for Albania’s political elite in the 1970s and remained a secret for much of its existence. Now it hosts exhibits into a history and contemporary art museum, displaying Albania’s modern history.

Just arriving at the bunker is quite an exciting experience, as you go though a long, dark tunnel in the hillside that leads you to the entrance on the side of a still-active Albanian military base. Once you’re inside the bunker itself, you can wander through the furnished rooms intended for the communist elite as they faced the invasion that so terrified them. Elsewhere you’ll find a very detailed history of modern Albania, beginning with the 1939 Italian invasion and ending with the overthrow of communism. The display arguably brushes over the true horrors of Hoxha’s Stalinist regime, while at least recognizing them, and there are some fascinating documents and photographs, including a video of Enver Hoxha’s 1985 state funeral. Other highlights include the enormous Assembly Hall, the main social center of the bunker, as well as the private chambers of other senior officials.

How to get there:
From the Skanderbeg Square, go to Et’hem Beg Mosque and continue walking on that street until you reach the “friendship monument”. The Plaza hotel is on your right, but at the monument, you will see blue buses that go to Dajti Express (at Dajti mountain) and also stops at Bunk’Art. It takes about 30-40 minutes and costs 40 Lek one way. The same bus makes a circle and brings you back to the friendship monument. 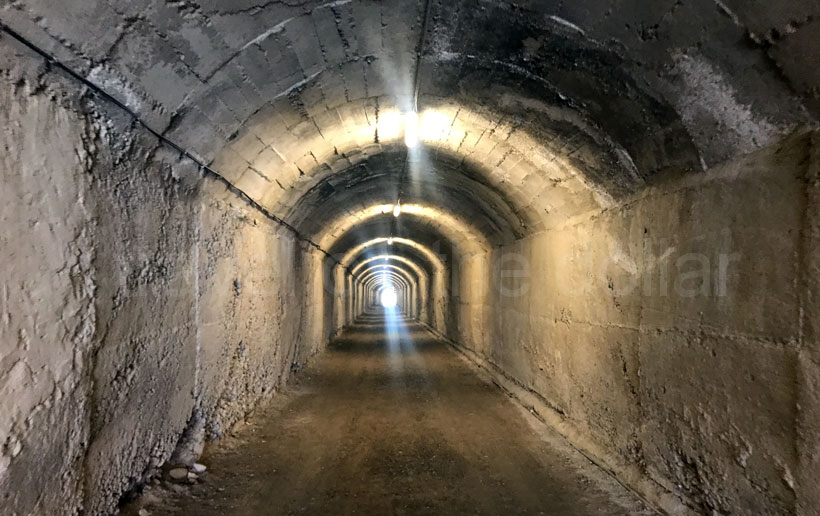 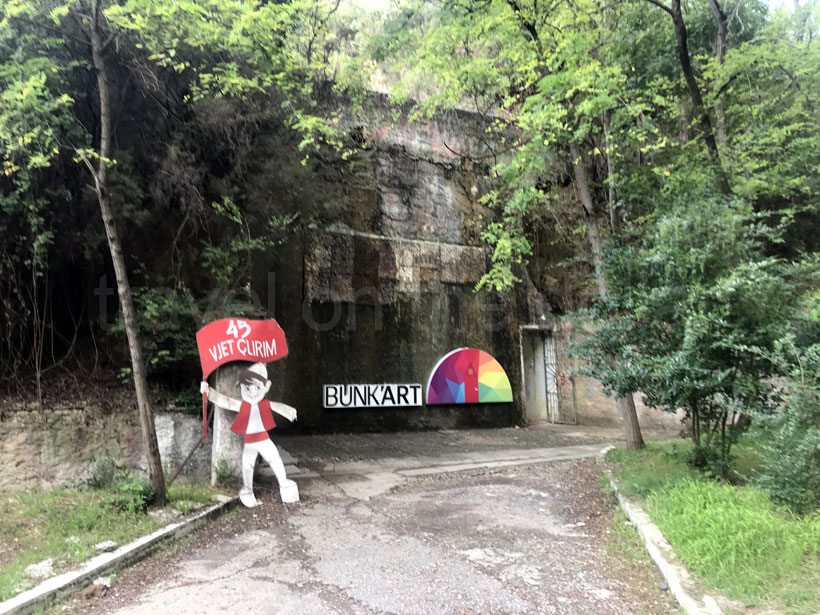 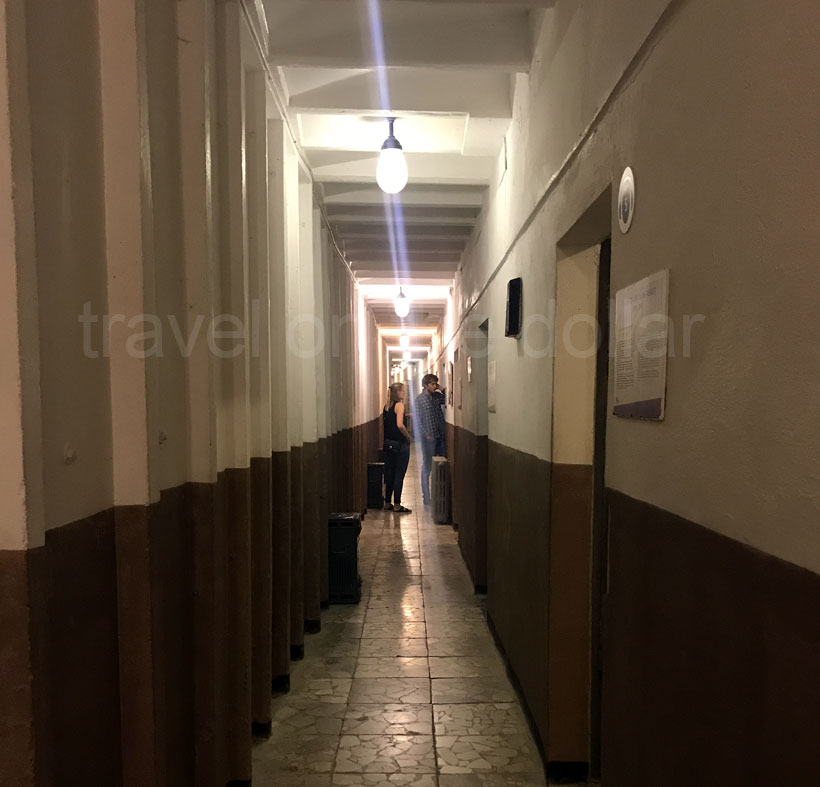 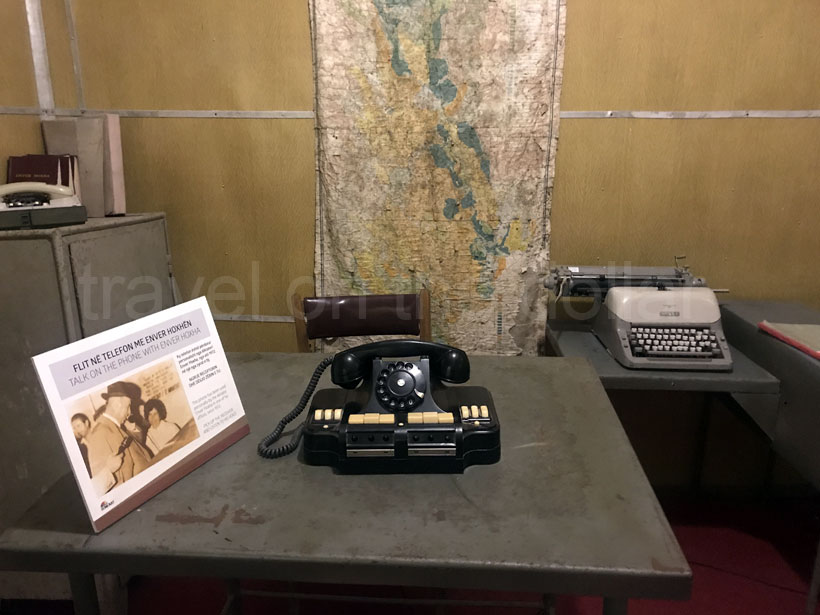 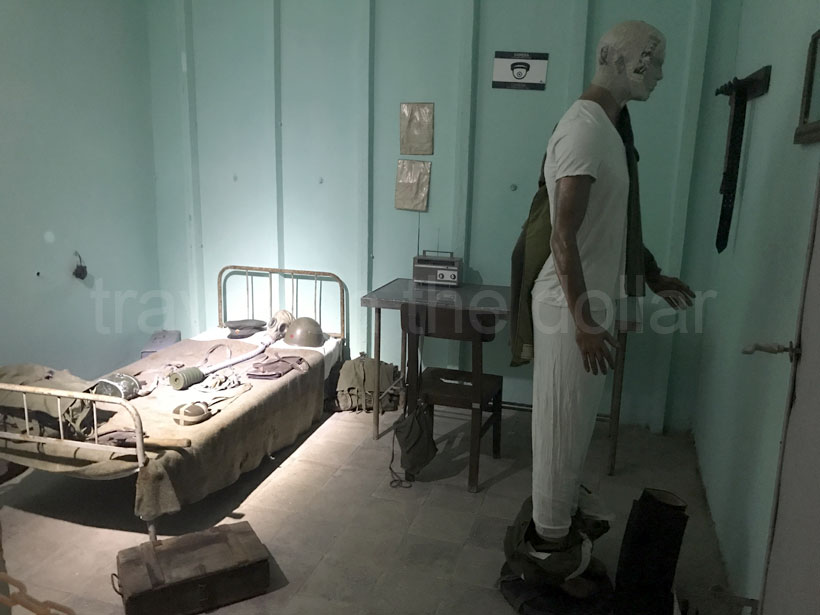 Bonus: Dajti Mountain
Just a short walk of about 500m from Bunk’Art’s entrance is the entrance to the gondola ride (Dajti Ekspres) going up the Dajti mountain. Standing at 1,613 meters (or 5,300 feet), this is the hausberg of Tirana. The gondola ride costs 800 Lek return ticket and takes just less than 20 minutes one-way up to the top of Dajti mountain giving spectacular views of the city. There’s a restaurant up on the top serving delicious traditional Albanian food. 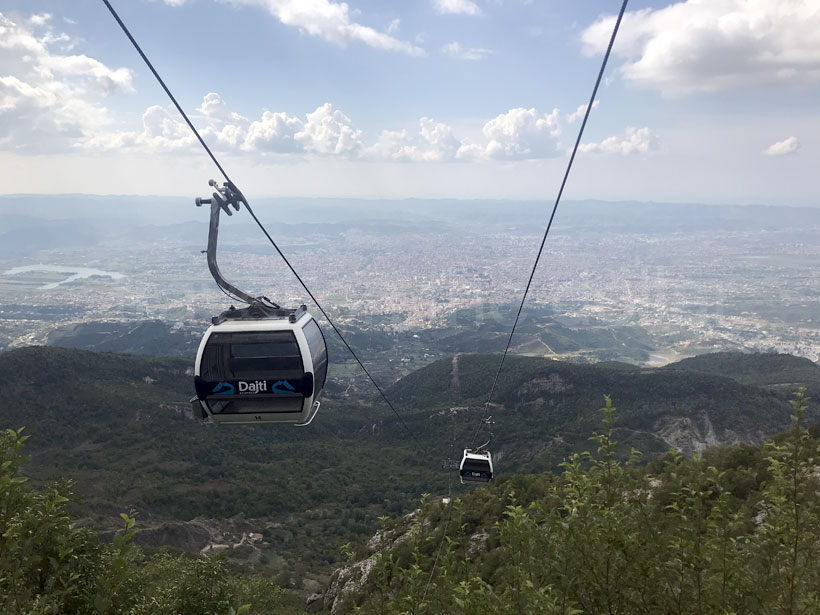 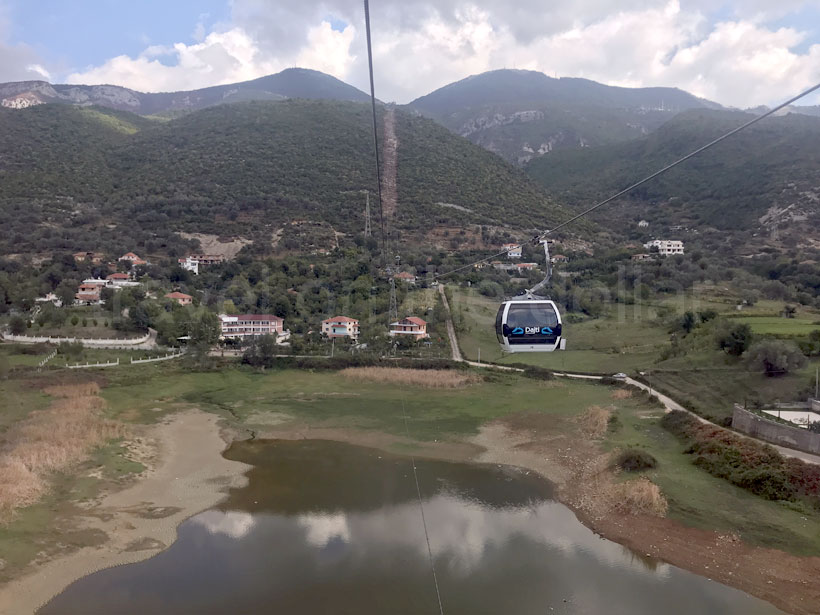 « Cheap ways to travel across the world while studying
Travel tip: Turn smartphone into an in-flight using Ziploc bag »

View of the Ferry Building and Bay Bridge from Coi

#throwback to six amazing days in the Amazon Rainf

The spectacular details at the Shah-i-Zinda Necrop

Coffee of a chilly day at my favorite place in the

View of the statue of Venus in my apartment buildi