A full day tour of Samarkand was scheduled for today, and after breakfast at Malika Prime hotel, my tour guide and I walked to the Gur Emir Madrasah right next to my hotel.

The Gur Emir was built in the southwestern part of Samarkand at the beginning of the 15th century. This majestic complex consisted of a khanaka, the madrasah of Muhammad Sultan – grandson of Amir Timur, and, later, tombs of Amir Timur himself and his descendants.

Tamerlane did not live to see the mausoleum finished, he died in winter 1405. The construction was completed by another Tamerlane grandson – Ulugbek. Although Amir Timur already prepared a mausoleum for himself in his native Shahrisabz, it was Gur Emir that became his tomb and a burial place of his descendants. There rest his two sons – Shahrukh and Miranshah, beloved grandsons – Muhammad Sultan and Ulugbek as well as Timur’s spiritual mentor – Mir Said Baraka.

The interior is enriched with bar tracery grids in the windows, marble and onyx panels covered with paintings, carving and inlaid with semiprecious stones. Subsequently, Gur Emir was a prototype for famous samples of architecture of the Great Mughal: Humayun Mausoleum in Delhi and the Taj Mahal in Agra, built by Timur descendants, who ruled northern India. 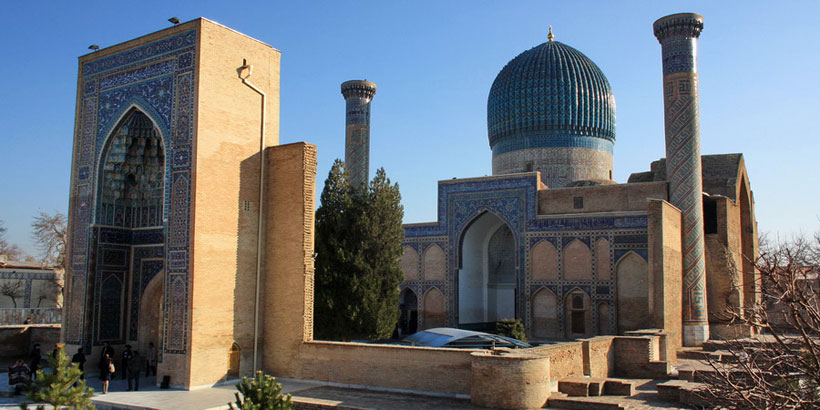 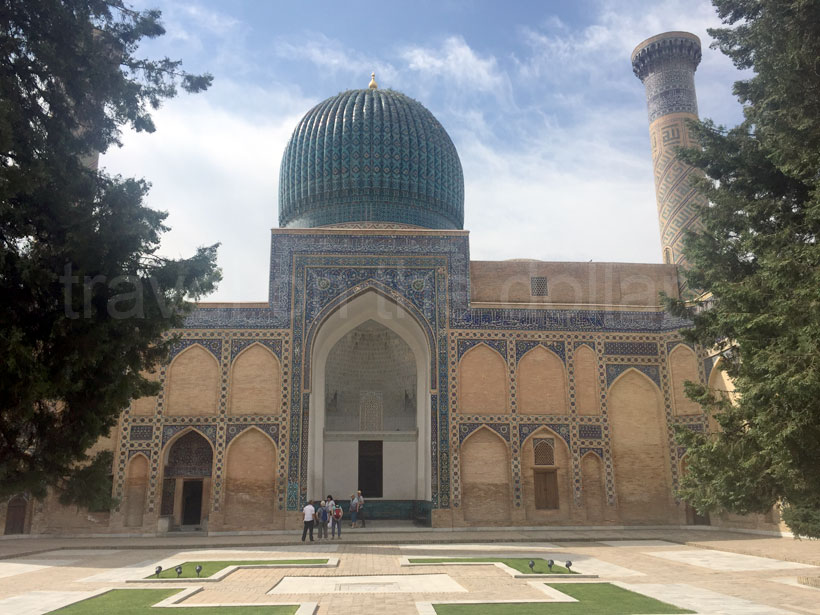 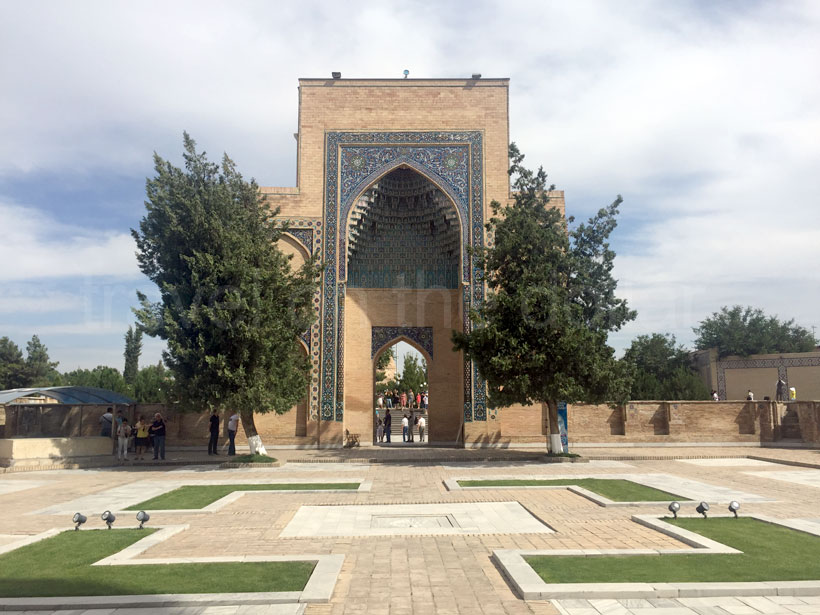 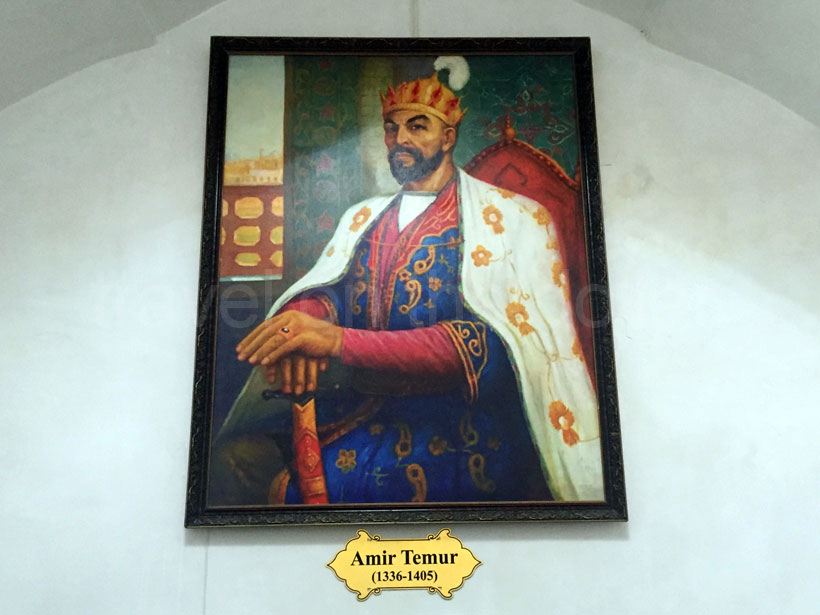 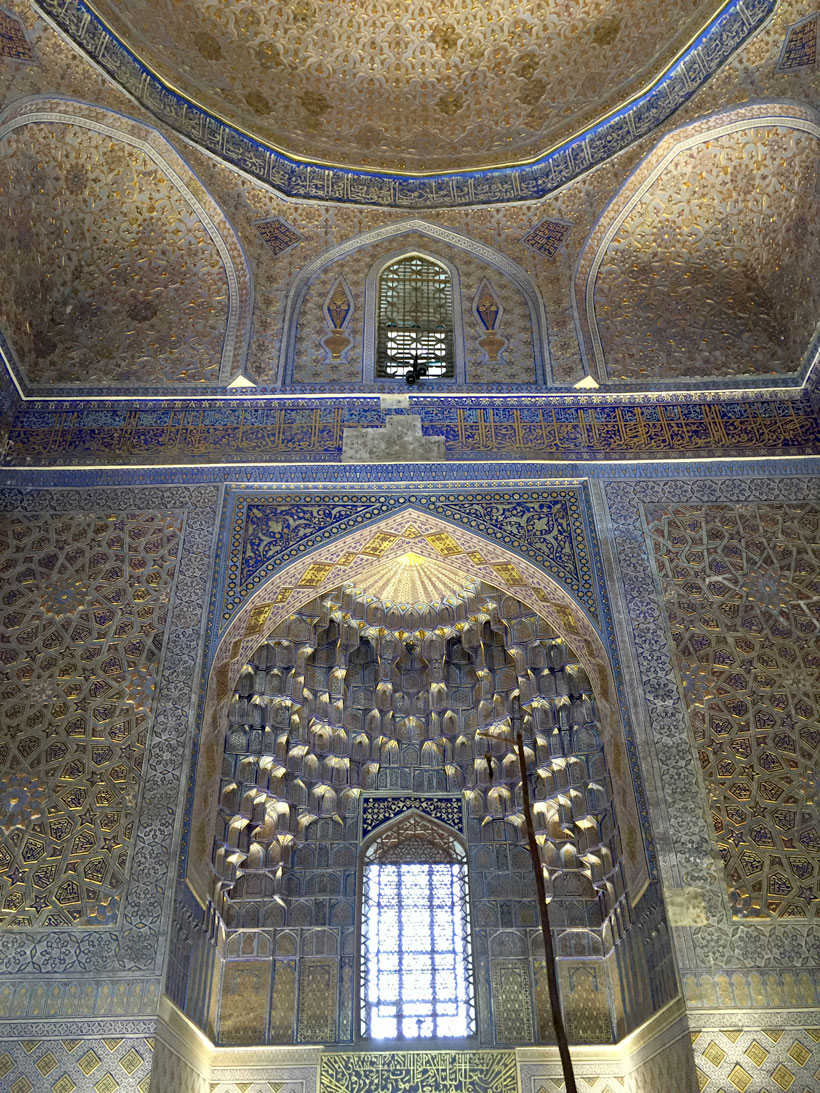 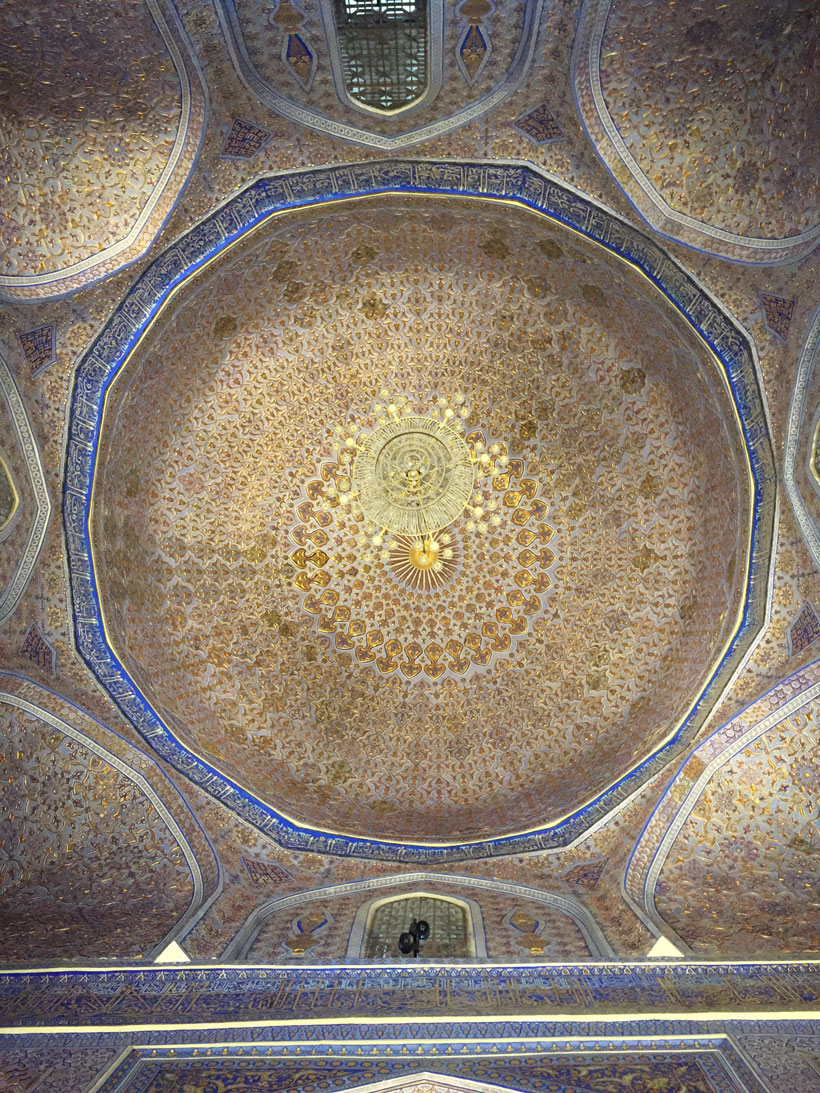 From here, it was a short drive to one of the best sights in whole of Uzbekistan – Registan Ensemble. A real gem located in the very heart of the ancient city of Samarkand, Registan has gained its worldwide fame thanks to the great architectural ensemble that has become a monument of the oriental architecture. From three sides, the square is surrounded with grand madrassah, portals of which are facing the center of the space. All three erections have their own unique décor. It is by virtue of these buildings, preserved on the territory of the city, Samarkand was included in the UNESCO World Heritage List in 2001.

In Uzbek, “Registan” means a sand place. In the ancient times, this central square was covered by sand and the territory was not surrounded by madrassah; those great monuments appeared rather later. In that period, authorities of the city were gathering people on the square to announce khan’s orders, held celebrations and public executions, and collected the army leaving to war.

Various rulers during their reign would change the main significance of the square, but since those times and up to now, Registan has always been the center of the city social life.

There are three madrassahs on the square: Ulughbek, Sher Dor and Tilla Kori, that are the main sights of the city.

Ulughbek Madrassah
A well-known mathematician and astronomer Ulughbek, assumed the authority in 1409. In year 1417, he gave an order to build the madrassah that would later be renamed in his honor. It was the first monument on the Registan Square. The façade of the madrassah looks out on the square, completed with two tall minarets in the corners. Special attention should be given to an exquisite interior of the building. Glazed bricks create beautiful ornaments on the yellowish laying of the walls. The madrassah portal is adorned with patterns of ten-pointed stars symbolizing the sky, and astronomy.

Sher Dor Madrassah
In 1612, Yalangtush Bahadur was appointed the emir of Samarkand. He was the governor-general of the Bukhara khans and by that time, he was already ruling feudal principalities, was known as a skillful politician and an educated commander.

Being a ruler of the city, he decided to construct another madrassah on the Square of Registan opposite the building erected by Ulughbek. The new madrassah was supposed to be located on the eastern side of the square and be a mirroring reflection of existing building on Registan. However, the exact mirroring concurrence did not work as the architect did not take one peculiarity into consideration – 200 years have passed since the construction of the Ulughbek madrassah, and the building had shrunk into the ground and the level of the square itself had risen to 2 meters. In the result, the new madrassah turned out to be taller. However, it is rather difficult to notice this different visually.

Upon construction, the madrassah was named in honor of the ordering party. However, the name did not find its usage among people, and the building was renamed to Sher-Dor. The name comes from the images on the portal: two big golden tigers carrying a sun on their backs and heading after white fallow-deer were adoring the entrance. Sher means tiger (lion) and the name is translated as “adorned with tigers”. It was this plot that later became a national symbol of Uzbekistan.

Tilla Kori Madrassah
Ten years later since the construction of the Sher Dor madrassah, the ruler of Samarkand Yalangtush Bahadur had planned to erect another building that was supposed to complete the ensemble. The construction began in 1646, in the northern part of the Registan Square, on the place of the caravan-sarai. The architect decided that the new madrassah should be another copy of already existing buildings, though would be located in the center.

The construction of the Tilla-Kori madrassah lasted more than 14 years and finished in 1660. The main façade of the building is done in two levels; the central portal is silted with a five-ended deep niche with two entrances leading to the inner closed yard. There is a blue-domed tower of the mosque to the left of the portal, with two minarets standing on both sides of the frontal part. The name “Tilla Kori” was given thanks to its décor.
Among all three madrassahs, this one has a rich decoration of walls that leaves everyone impressed with the abundance of golden colors. Tilla Kori means “gilded”. 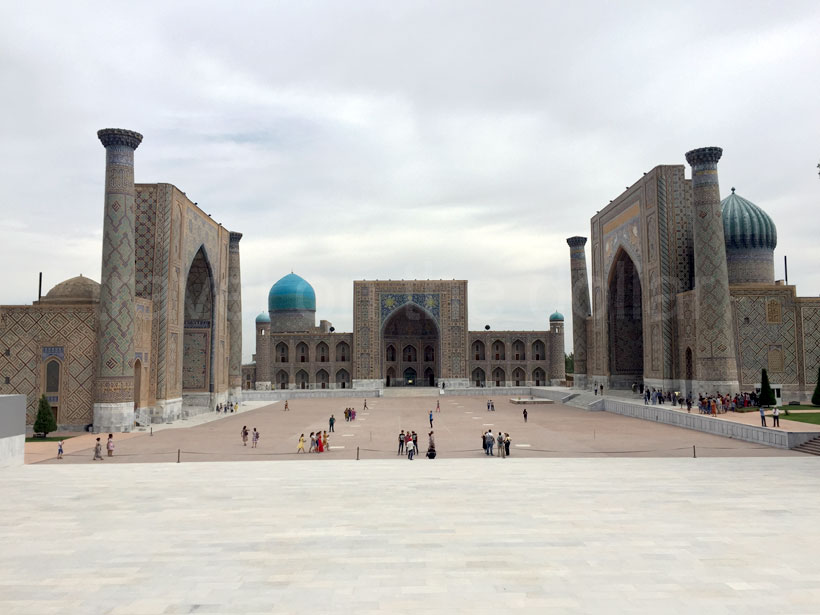 [Panoramic view of center veranda of Registan ensemble – Ulughbek Madrassah of left, Tilla Kori madrassha in center and a slight part of Sher Dor Madrassah on the right] 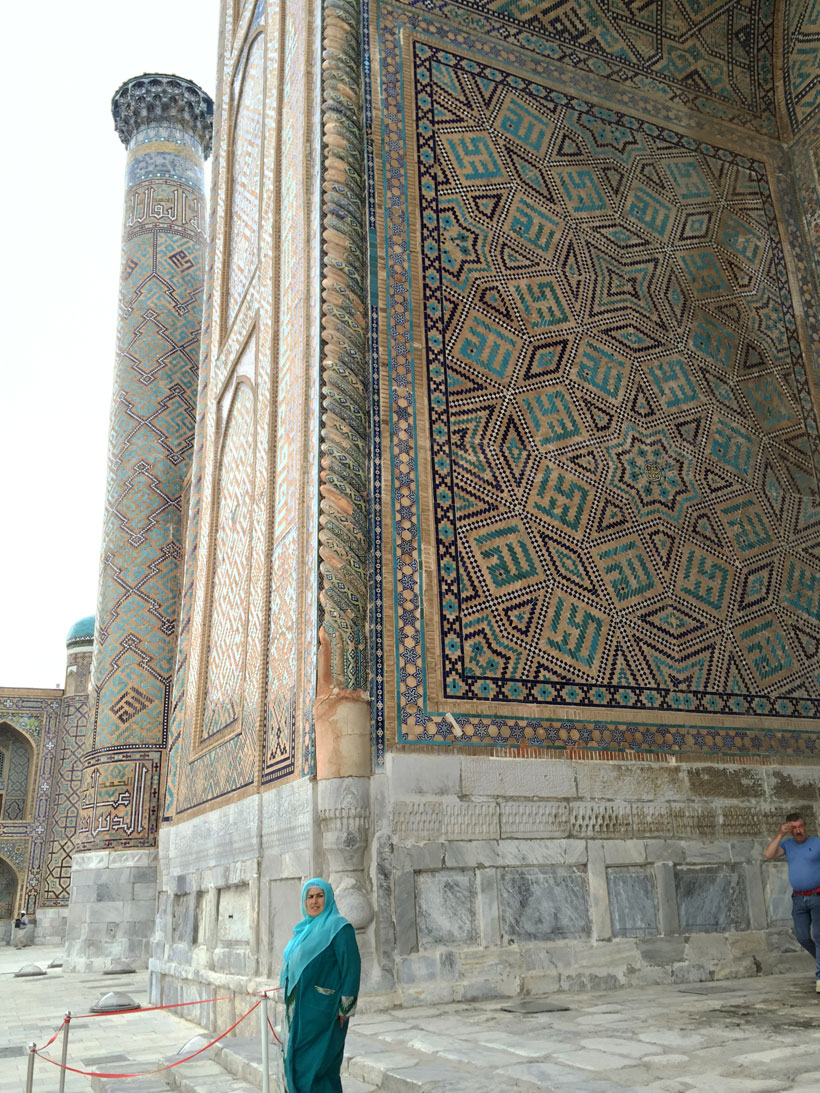 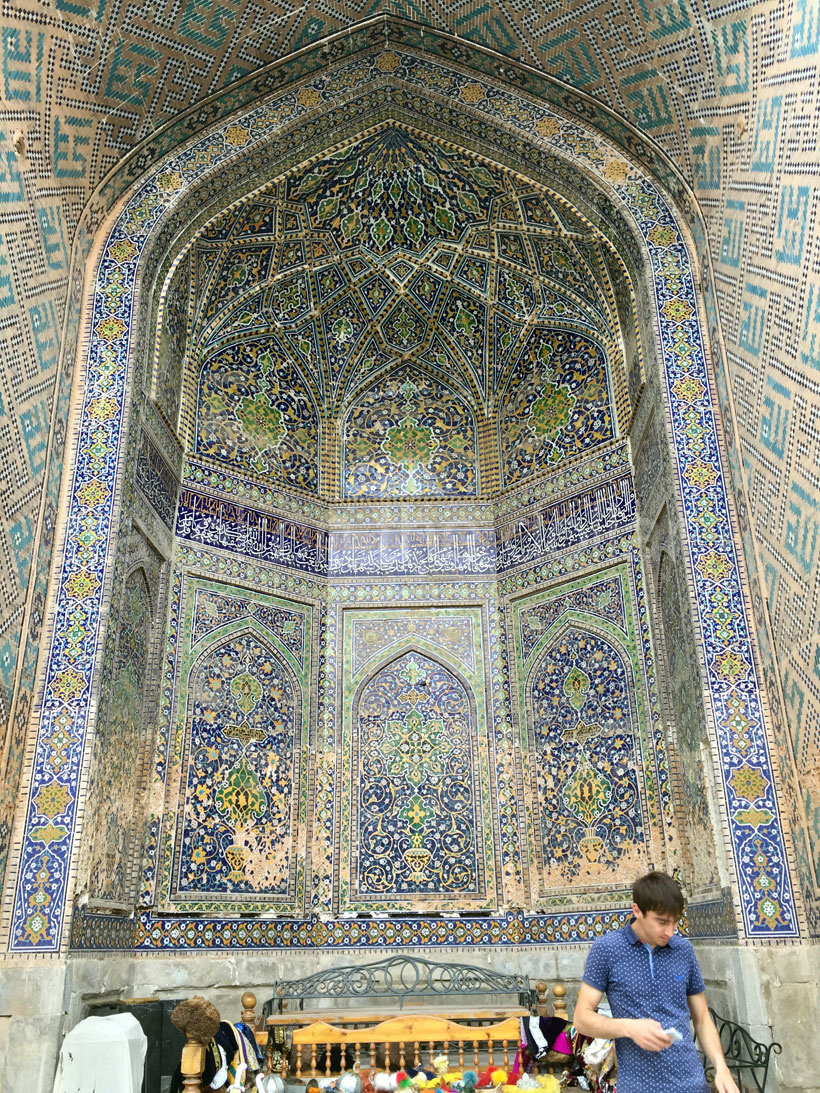 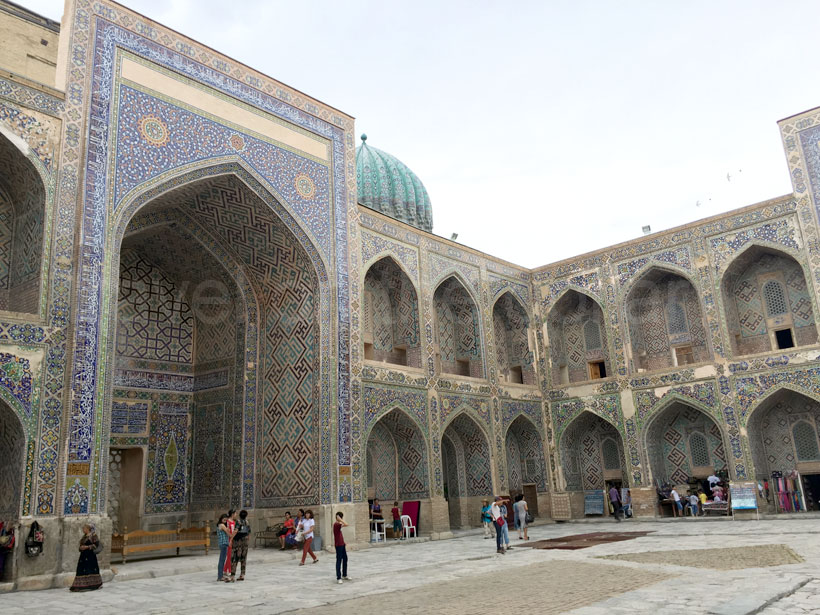 [Inside the courtyard of Tilla Kori Madrassah]

[Inside the veranda of Tilla Kori Madrassah] 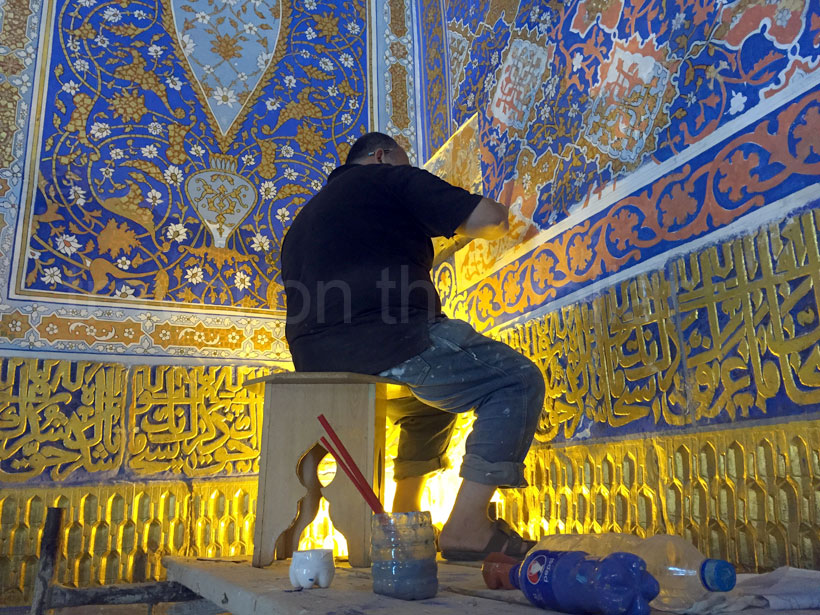 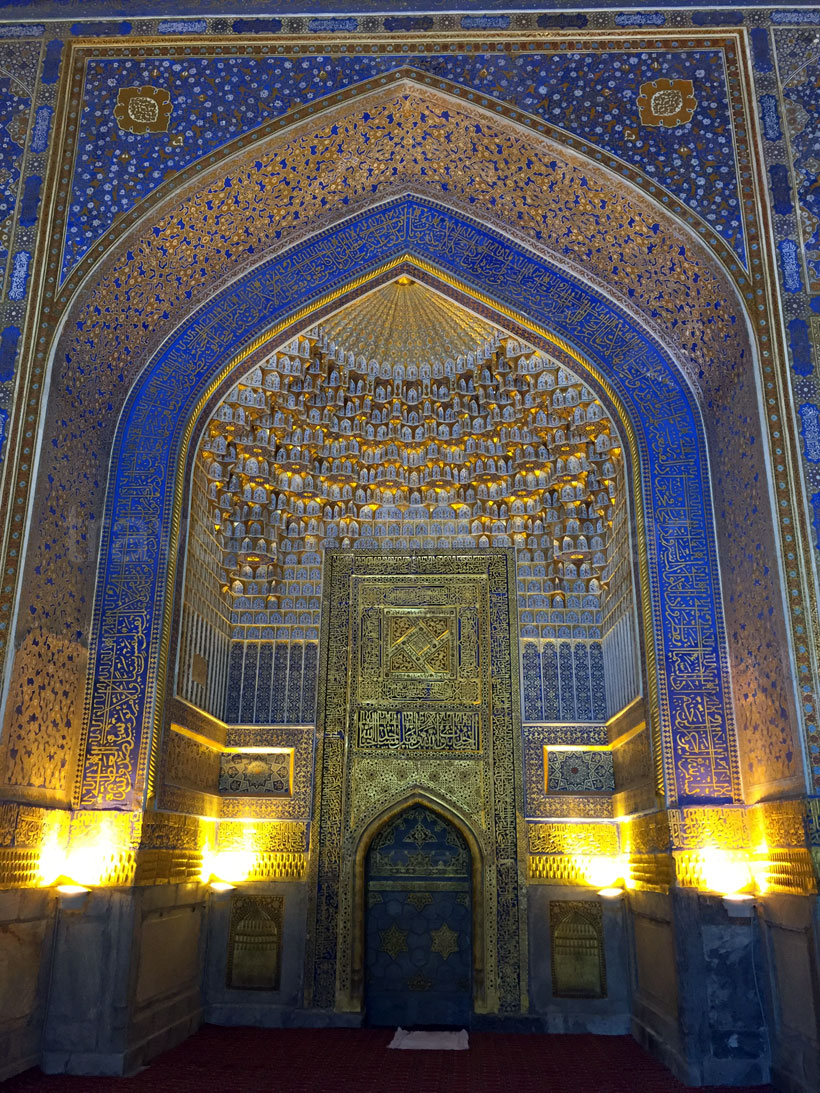 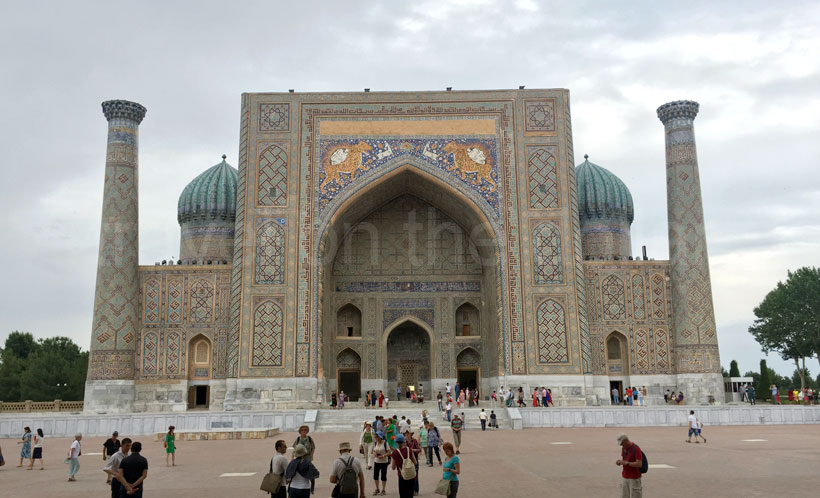 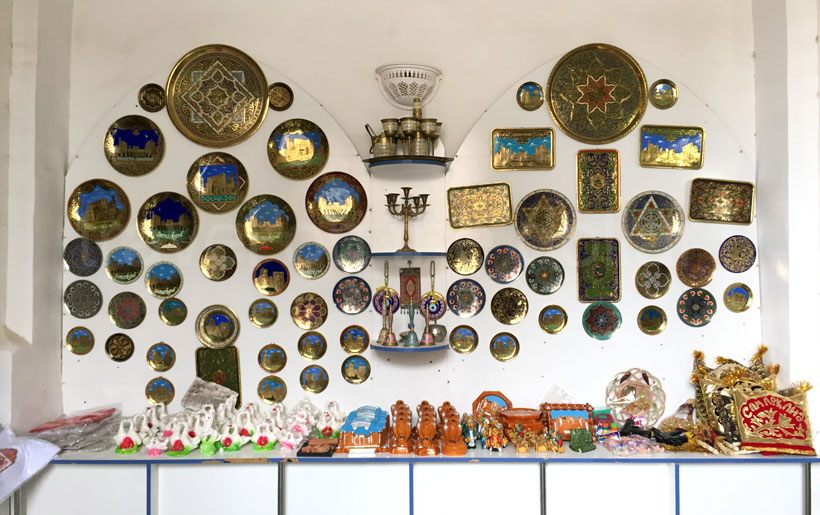 From here, it was a short drive to Ulughbek Observatory. Constructed by mathematician and astrologist, Ulugbek, in 1428-1429, on one of the hills at the bottom of Chupanata altitude. In the main hall, a huge instrument was placed to observe Moon, Sun, and other stars of the vault of heaven.

The basis of observatory was giant goniometer vertical circle), radius of circle was equal 40,212 meters, and the length of arc was 63 meters. The main instrument, sextant, was oriented with amazing exactness by line of meridian from south to north. Exactness is amazing because it was made with no help of optical instruments. Astronomic tables contents coordinates of 1018 stars. His catalog did not lose its value in our days. With amazing exactness made the calculation of the length of star year, which by Ulugbek’s calculation is equal to 365 days 6 hours 10 minutes 8 seconds. Actual length of star year by modern data is 365 days 6 hours 9 minutes 9.6 seconds. Thus the mistake is only less that one minute. 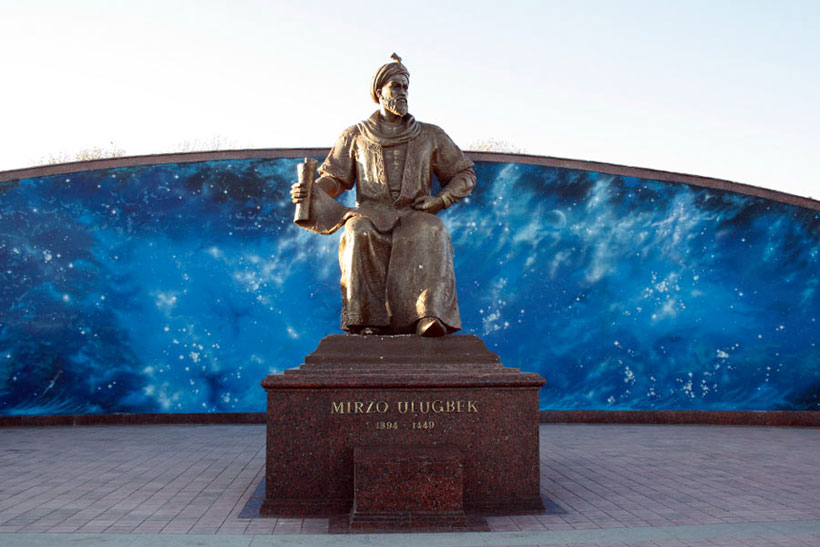 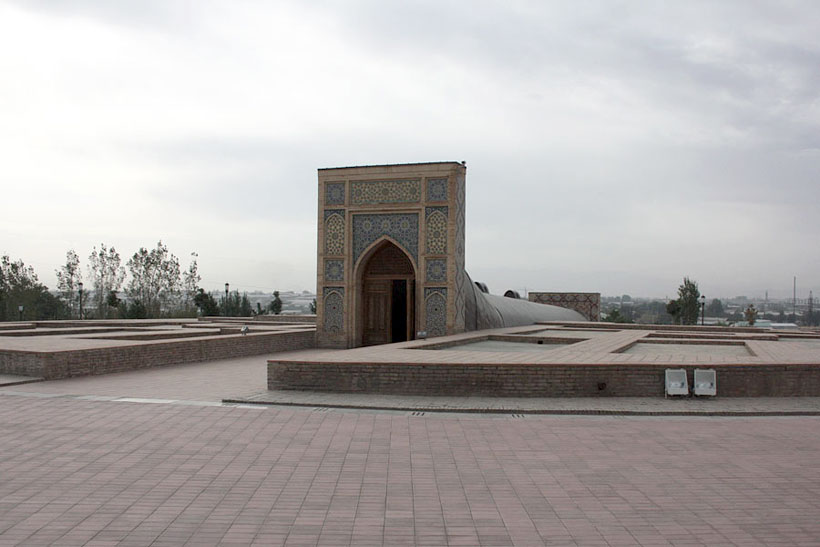 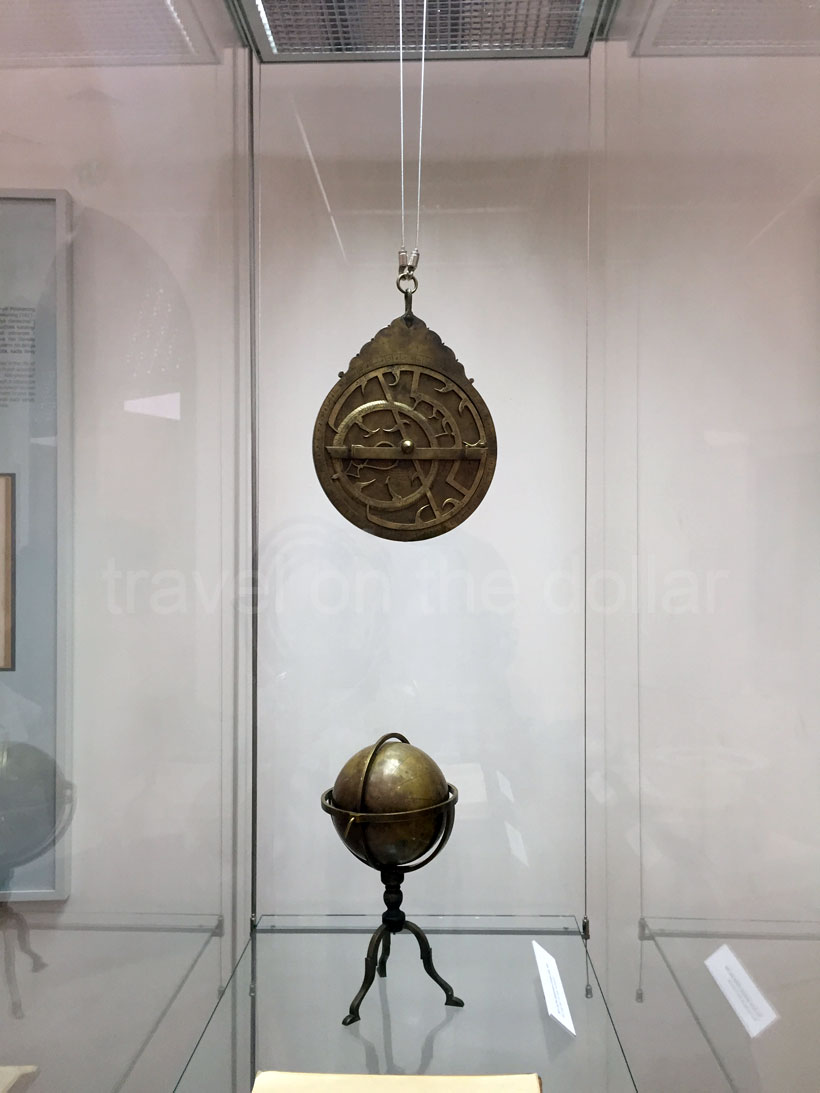 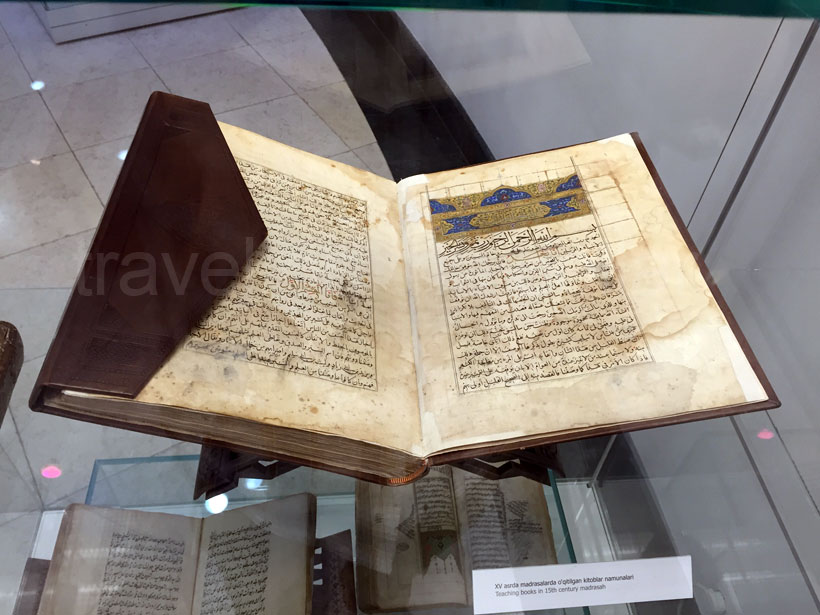 It was lunch time and the best place to have some authentic food is the local markets, so that was our next stop. Similar to markets in Tashkent and other places in Uzbekistan, the Samarkand market had heaps of candies, stacks of grains, fruits, vegetables and cooked food. 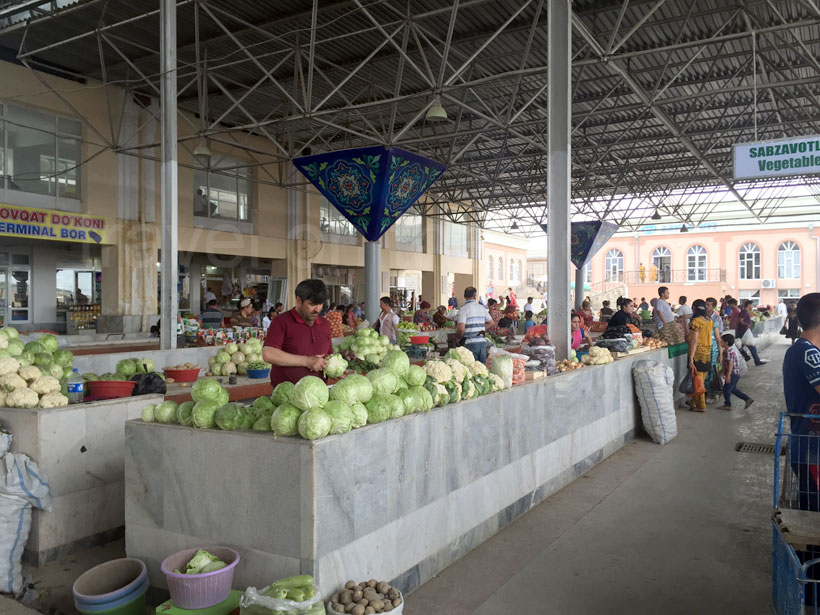 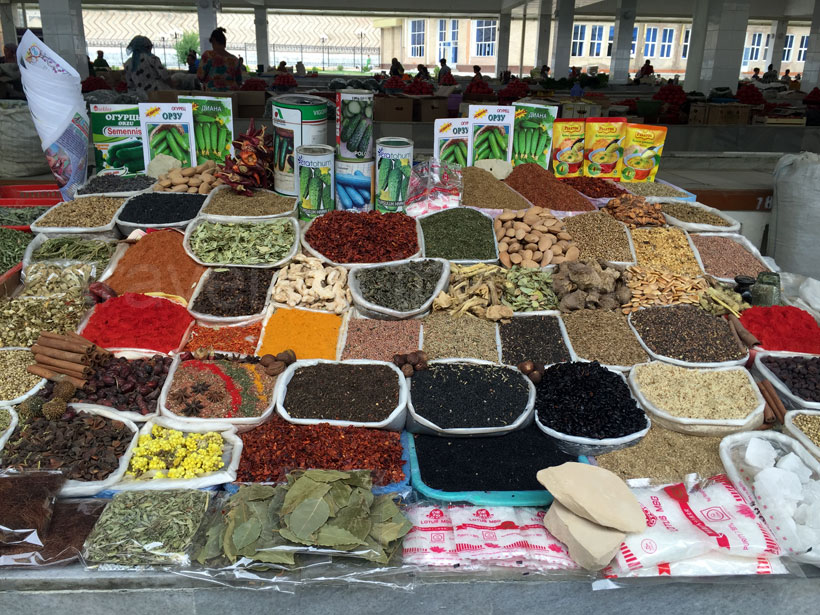 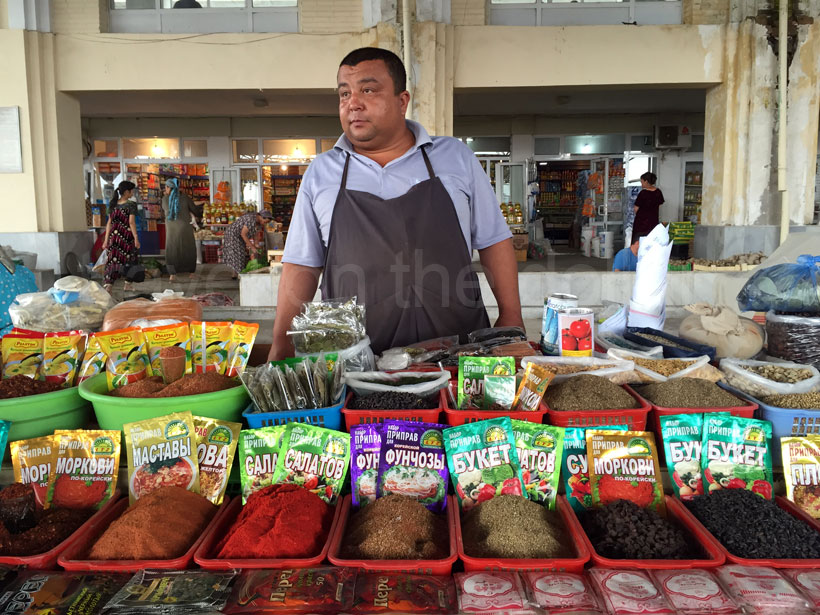 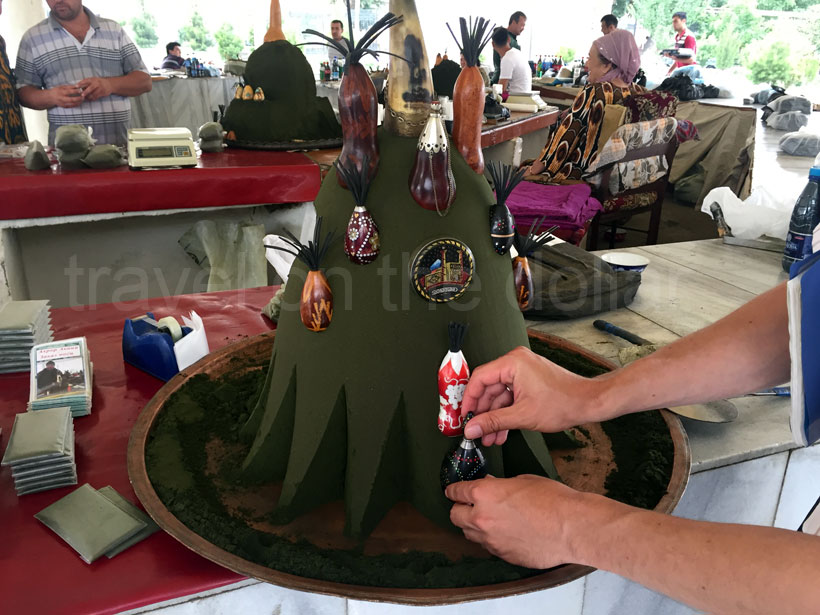 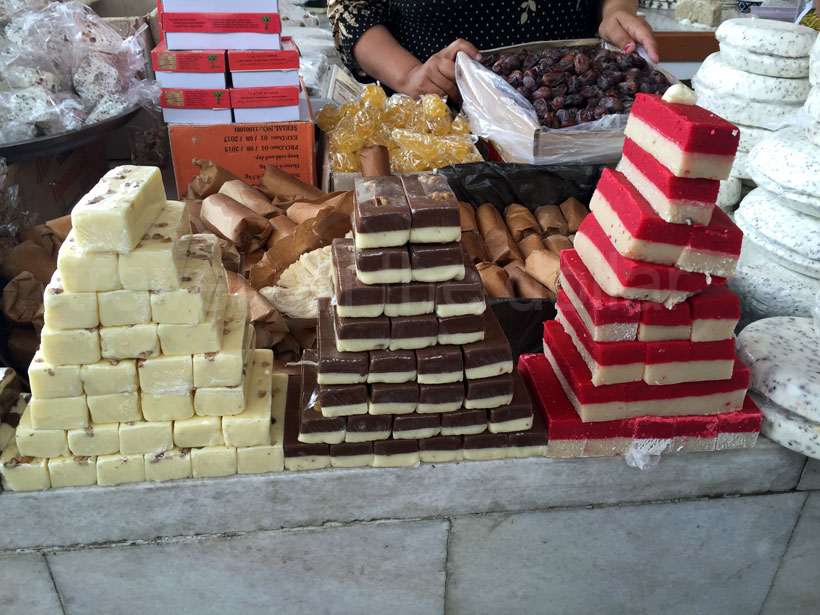 Post lunch, we stopped by Shakhi Zinda Necropolis, one of the most mysterious and unique architectural monuments of Samarkand, Shakhi Zinda complex. It consists of rows of refine sparkling blue colors tombs. Harmoniously combined in a lively and moving composition, various mausoleums are grouped along the narrow medieval streets.

Shakhi Zinda is the burial place of royal persons and nobles. But the main mausoleum from which the necropolis starts seems to be the imaginary grave of Prophet Muhammad’s cousin, Kusam ibn Abbas. The complex was called “Shakhi Zinda” that means in Persian “The Living King”. He was one of those who preached Islam in that region. Later the Complex became an important pilgrimage center that was revered by the people as sacred.

All mausoleums complex Shakhi Zinda form a single composition. Each of them is a square building with a dome, the entrance to which is highlighted by a portico. Is rich in architectural decoration of buildings, which are used irrigation bricks, majolica tiles, carved mosaic. 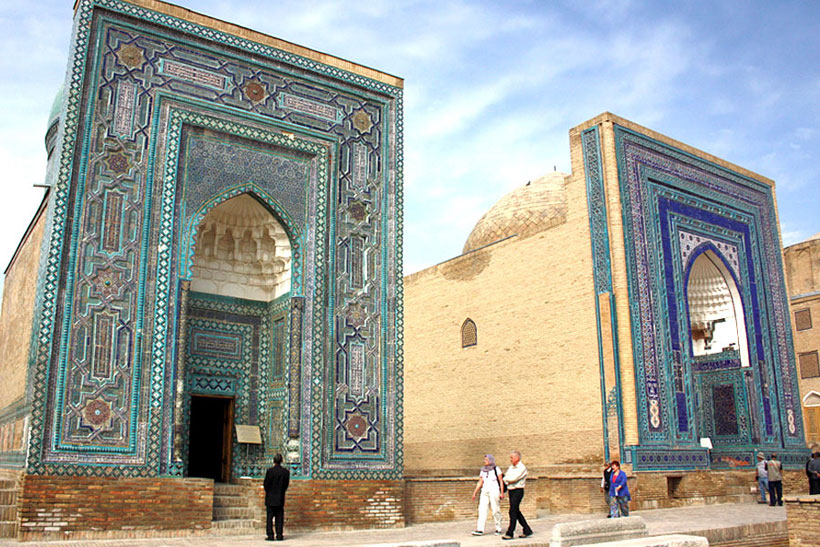 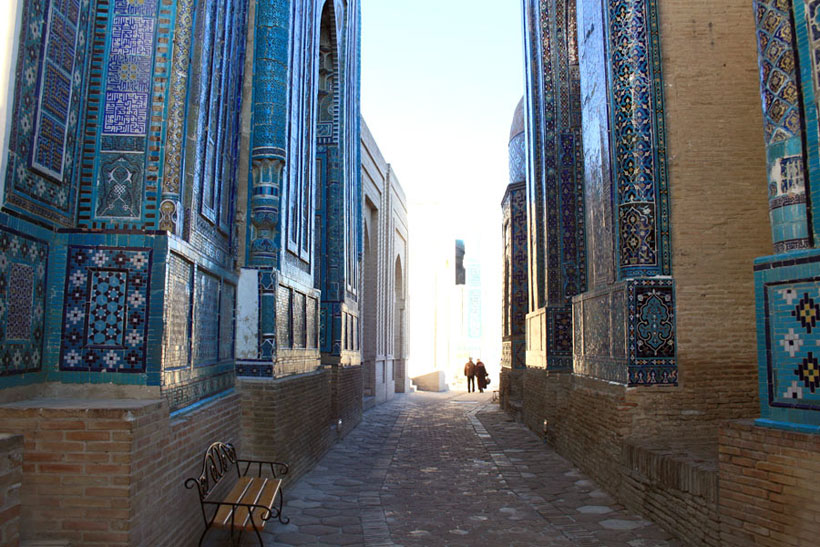 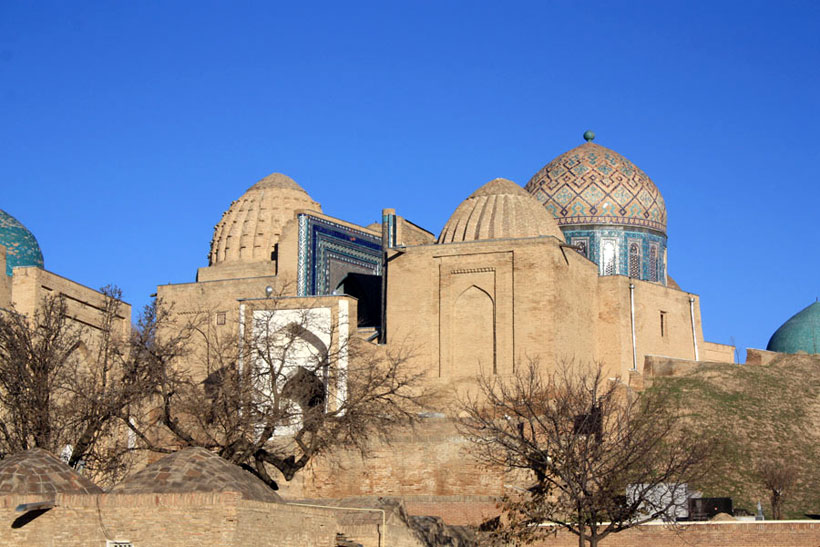 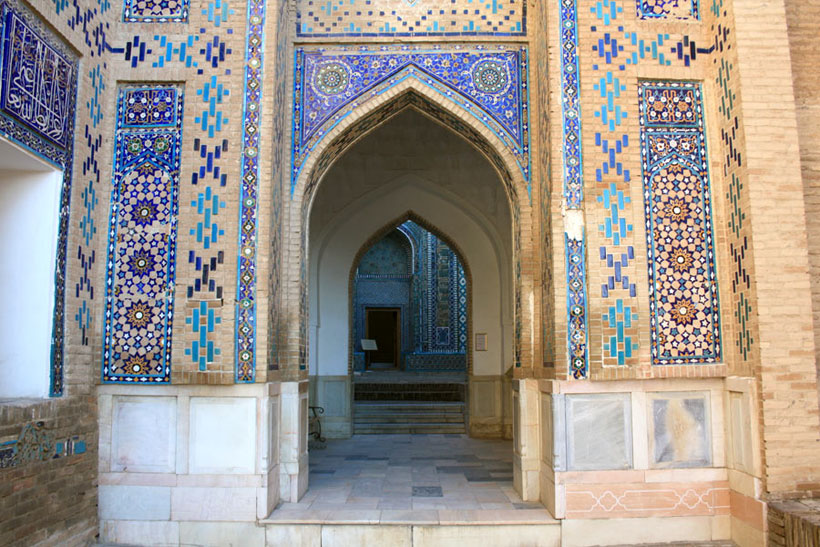 This was the end of our tour in Samarkand. We headed back to the hotel for a nap and then headed out to Platan Restaurant for dinner before calling it a day!