The second largest city in Turkey is İzmir and summer season has an influx of tourists and locals visiting this coastal town. It is also a weekend getaway for many visiting Chios island of Greece. Combined with Çeşme, İzmir is also a breather for road travelers from İstanbul to Kuşadası or Selçuk, that attracts thousands every year for Ephesus and Pamukkale.

Apart from the beaches, there are a few sights to visit in İzmir – Konak Square, Asansör, Kemeraltı market and the bar-hopping area of Alsancak.

İzmir has good public transportation of buses and cheap taxis. There is also a metro line connecting city center/Konak Square with the northeastern suburb of Bornova.

How to reach İzmir:
If you are flying in to Adnan Menderes Airport, 16 km south of the city center, then you can take the airport shuttles (Havataş) that usually meet incoming flights to go to city center (costs TL 10), or hop on the public buses run by ESHOT (less frequent than Havataş, costs TL 5); or take the suburban train line (İzban) connecting the airport with Alsancak Station in city center, just north of Konak Square with intervals of about 15 minutes between 6AM and 11:30PM.

If you take the train then you have to transfer to the metro in Halkapınar station for trips further into the city center, e.g. Konak Square. The free metro bus shuttle runs between Halkapınar metro station to the Halkapınar tram station.

I had booked my hotel close to Konak square, which is a 5-minute walking distance from Basmane station.

İzmir Otogar or outbound travel
If you want to visit the nearby towns or planning to travel to Kuşadası or anywhere by bus then you have to reach İzmir Otogar (bus station) which lies 6km north east of the city and although there are plenty of dolmuş that make the journey there, just inquire at one of the various bus companies’ offices for free rides to the bus station. Hotel Guzel was close to the Basmane metro station and around the circle from the station, Metro bus company runs free Metro shuttle buses to the İzmir Otogar every 30 minutes. Just get in that free shuttle! The free shuttle takes about 15 minutes to reach the bus station, which has the offices of all the bus companies.

I arrived by flight from İstanbul early morning and decided to take the train to the center (costs TL 3.50 from airport to Halkapınar, and TL 3 from Halkapınar to Basmane). After checking-in to the hotel, it was time to have brunch at Ezo Cafe, right next door from the hotel – Ayran and Tavuk (chicken kebab).

Walked to the main street and got the stamp in my Postal Stamps Travelogue book.

Continuing west on the main street all the way takes you to the first sight-to-see – Konak pier that has some of the best restaurants facing the Aegan Sea.

And a 10-minute walk south by the promenade brings you to the most visited sight in İzmir – the Clock Tower and Konak Yali Mosque at the Konak Square. The clock tower was built for the 25th anniversary of the anthronement of Abdülhamit II, in 1901. Some parts of the construction expenses was provided by the people of İzmir, because of the donation campaign organized by Kamil Paşa, then governor of İzmir.

Right behind the square is the entrance to the famous Kemeraltı (pronounced keme-raal-tuh) market that sells clothes, jewellery, souvenirs, gifts, spices, produce and lot more; and walking in the small lanes of the market will bring you to some cozy, small cafes that sell delicious and freshly-made food like kebabs, fish-dishes and juices.

You can spend hours here bargaining on almost everything, but if you get our of the market on the northern side, then you will be close to the Agora, which is the site of the original Roman city of Smyrna. You can actually see more than 90% of the city from the road outside, so there’s no reason to spend TL 8 as entrance fees to visit this site. In fact, if you ask me, you can easily skip this place!

Walking back to Konak Square, I headed further south along the promenade, to one of the best sights in the city and a must-visit – Asansör (literally Elevator). It’s a 2.5-3km walk from Konak Square. Constructed by a Jewish businessman in 1907, the purpose was to help residents to go to their districts on the top of the hill. The elevator used to work by a water-driven mechanism. Later, it was restored by Izmir Municipality and now it works by electricity. There is a restaurant located on the top of the elevator with a gorgeous bird-eye view of Izmir.

I spent a lot of time up there until after sunset and then took a cab to the bar-hopping neighborhood of Alsancak on the northern side of the city.

And after some drinks and dinner, headed back to the hotel late night. 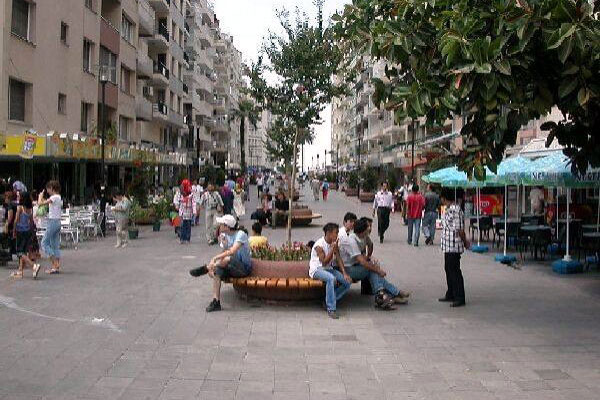 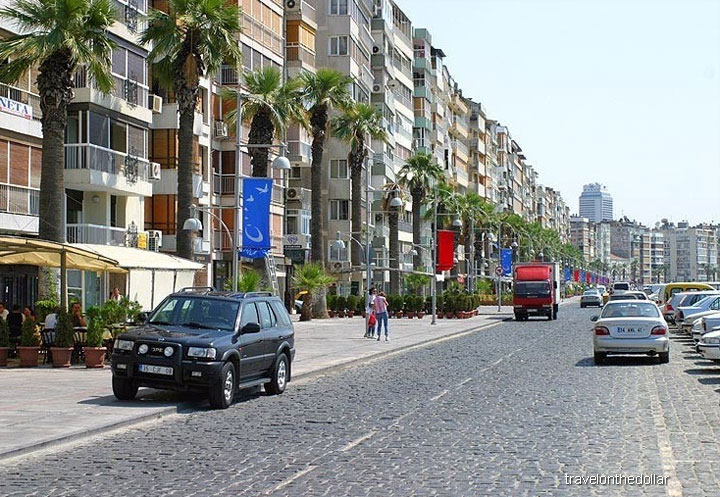