After breakfast at the hotel, it was time to visit the north side of the city (from downtown), before heading to the airport for a 5pm flight to Bagan. I had just over 4 hours to finish the sightseeing and head back to hotel so I can reach the airport at appropriate time. Which is why I took a taxi to my first stop – Shwedagon pagoda.

The Shwedagon Pagoda, also known as the Great Dagon Pagoda and the Golden Pagoda, is a 99 meters gilded pagoda and stupa that lies to the west of Kandawgyi Lake, on Singuttara Hill, thus dominating the skyline of the city. It is the most sacred Buddhist pagoda for the Burmese with relics of the past four Buddhas enshrined within, namely the staff of Kakusandha, the water filter of Koṇāgamana, a piece of the robe of Kassapa and eight strands of hair of Gautama, the historical Buddha.

According to tradition, the Shwedagon Pagoda has existed for more than 2,500 years, making it the oldest historical pagoda in Burma and the world. However, the historians and archaeologists say that the pagoda was built by the Mon people between the 6th and 10th centuries CE. By the beginning of the 16th century the pagoda had become the most famous place of pilgrimage in Myanmar.

A series of earthquakes during the next centuries caused damage. The worst damage came from a 1768 earthquake that brought down the top of the stupa and it was raised to its current state by King Hsinbyushin of Konbaung Dynasty. A new crown umbrella called hti was donated by King Mindon Min in 1871 after the annexation of Lower Burma by the British. A scaffold was erected and extensive repairs to the hti were made. The pagoda is listed on the Yangon City Heritage List. 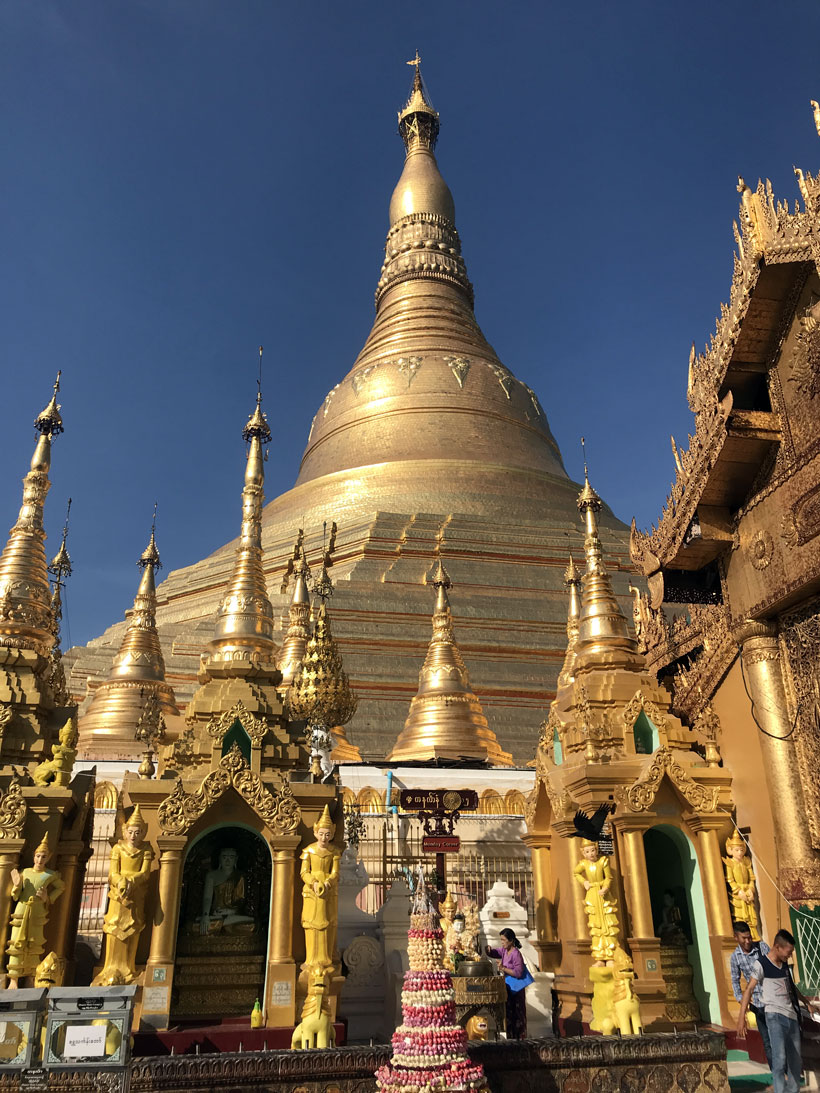 [The main stupa of Shwedagon pagoda] 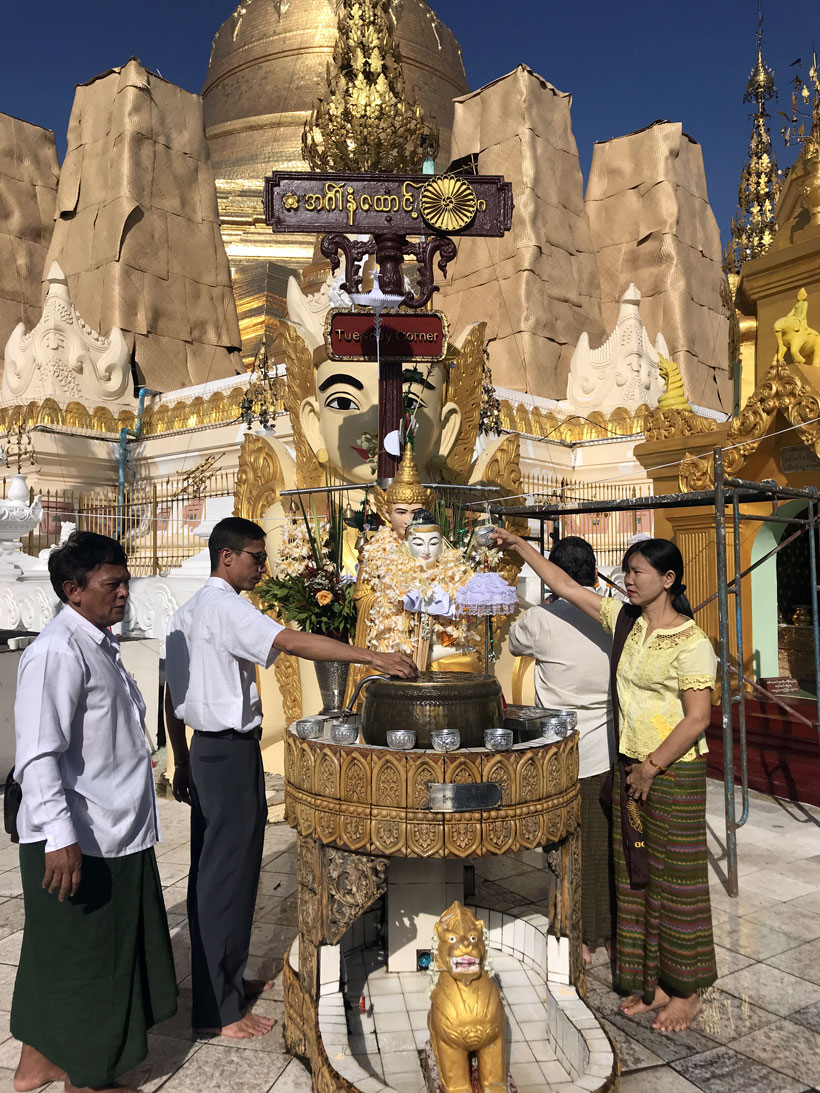 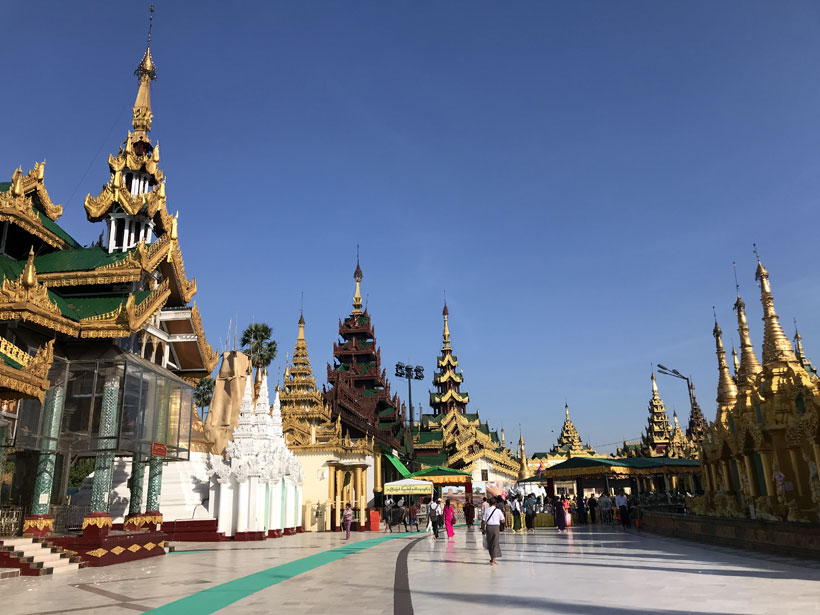 Chauk Htat Kyi Temple
I took a taxi to this next destination from Shwedagon pagoda. The iconic part about this temple is that it houses one of the most revered reclining Buddha images in the country. The Buddha image is 66 metres (217 ft) long, and one of the largest in Myanmar. 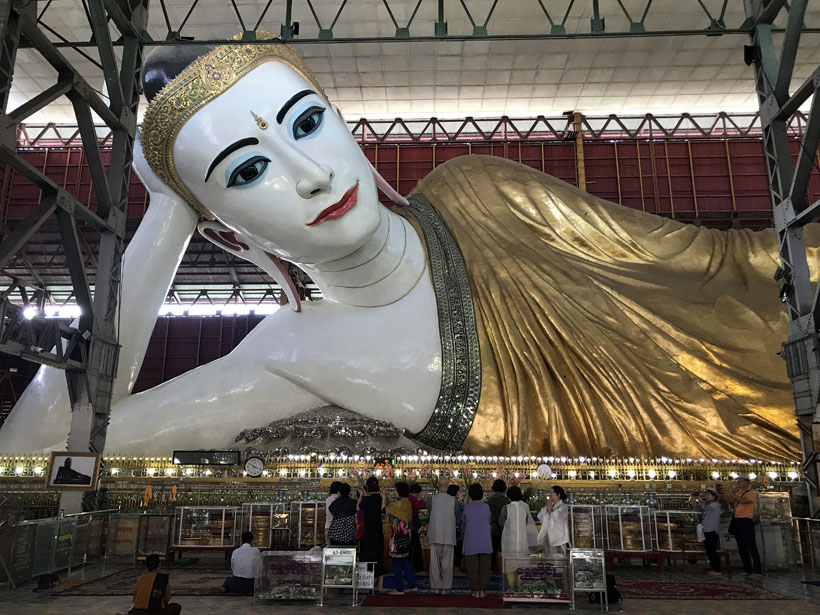 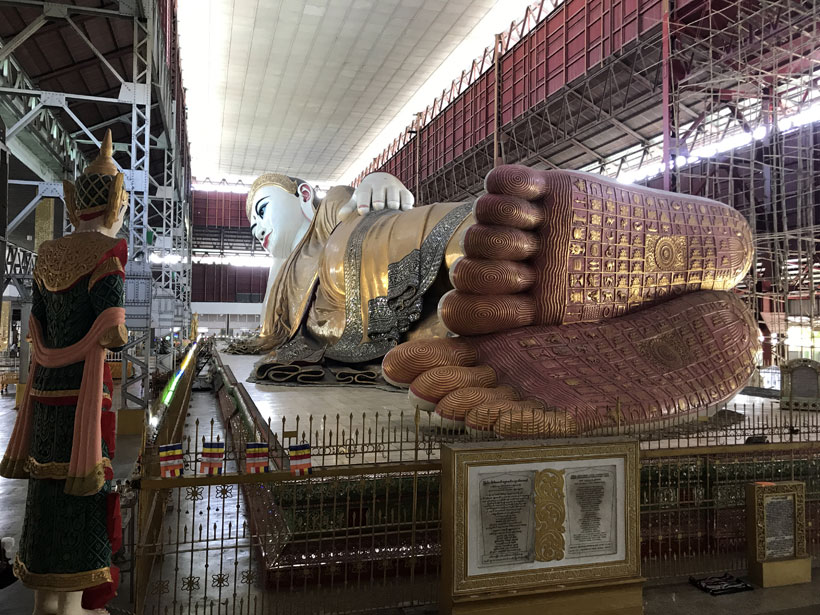 A flight of stairs leads to the temple grounds. A gate with a very ornately decorated five tiered Burmese Pyatthat roof, topped with a hti is guarded by two large white and gold mythological lions called Chinthe. 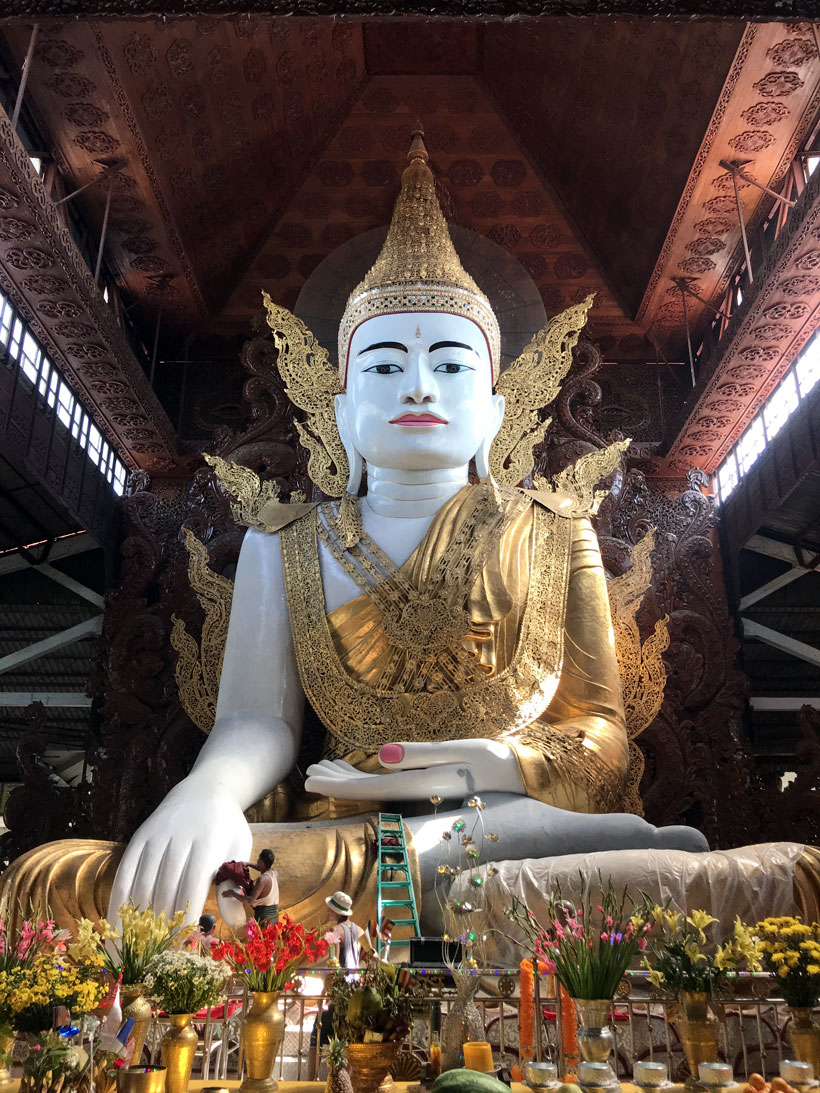 Bogyoke Park & Lake Kandawgyi
My last stop in Yangon for the day was this park in the middle of the city that surrounds Lake Kandawgyi, a man-made lake. The lake in itself is one of the two biggest lakes in Yangon, 5 miles long and 20-45 inches deep; and the posh area around what also is referred to as the “Royal Lake” is home to a number of embassies. Visitors to the lake get a fabulous view of one of Yangon’s most famous restaurants; the Karaweik. This restaurant dates back to 1972 and is a replica of the Burmese royal barge, which is also depicted on the bottles of the country’s beloved Myanmar Beer. 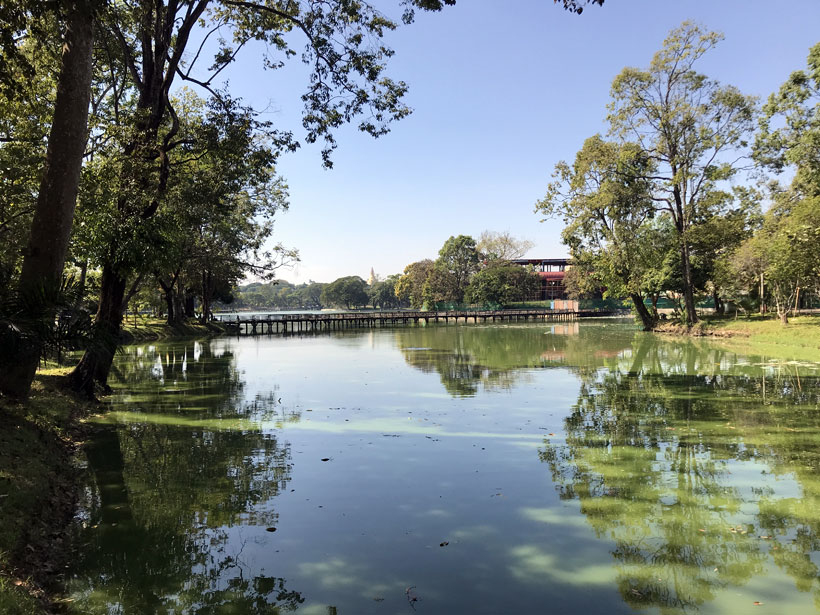 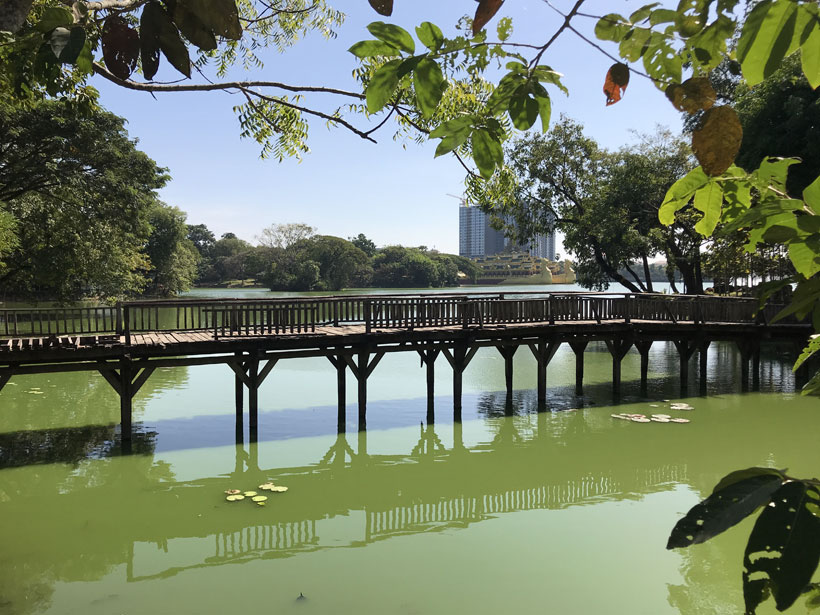 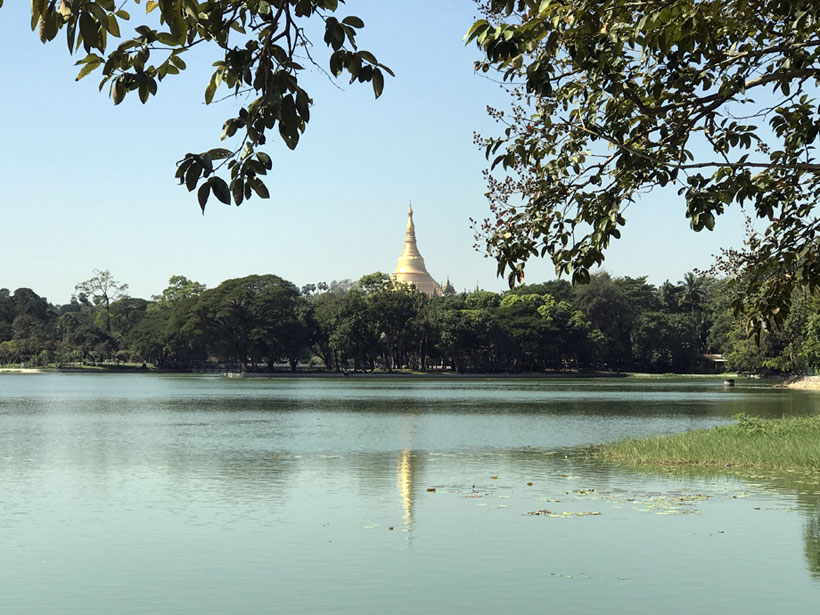 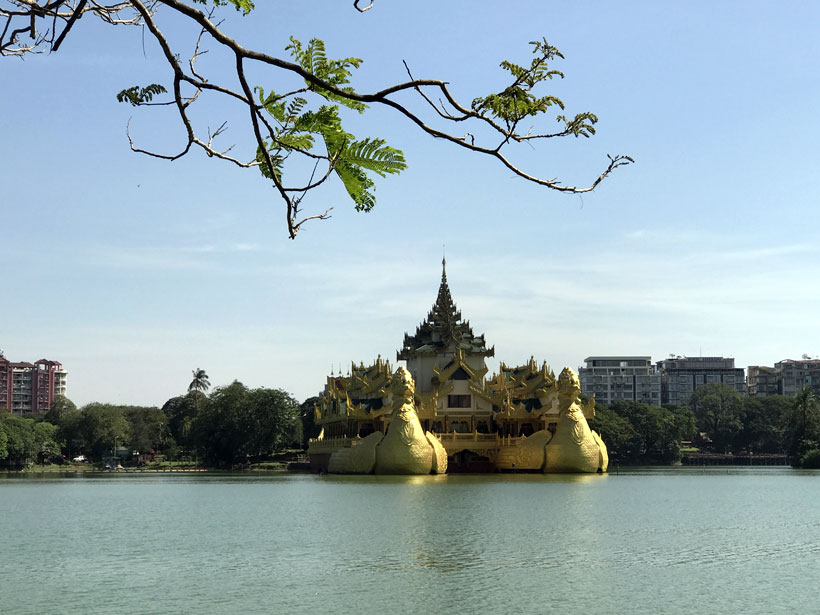 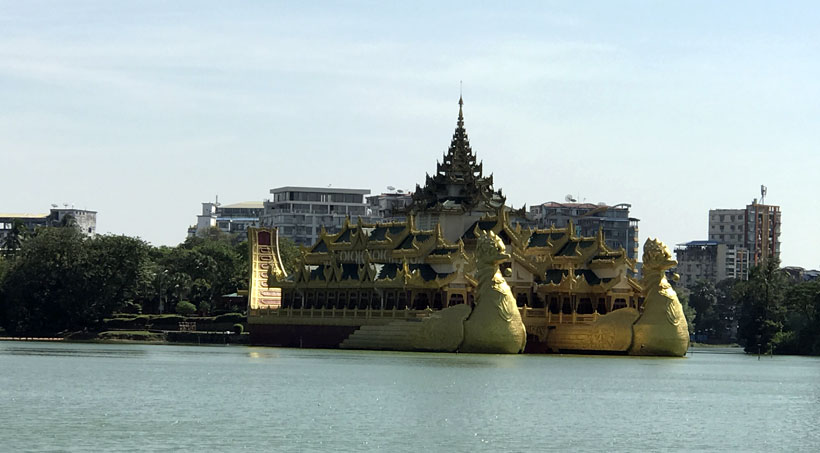 Took the taxi back to the hotel in downtown and picked my bags to head to the airport for 5pm flight. It was past 2pm and I had two options to reach the airport from downtown – take the bus ‘YBS 37’ that takes about 1 hour (non-peak hours time) and then walk for about 25 mins; or take a taxi costing MMK 8,000 taking about 45 minutes. Having time on my hands, I decided to take the former option (bus and walk). The bus from downtown to ‘Se Mai’ bus station, close to the airport costs MMK 200 one way.

An hour’s flight brought me to Nyaung U airport (NYU), located just over 5km from north Bagan.

IMPORTANT – Upon arrival, the airport staff will hold on to your bags until you pay the mandatory fee of MMK 25,000 for the Bagan Archaeological site. Only after you make the payment will they let you have your checked-in bags. I assume you won’t be able to get out of the airport in case of carry-on bags only. 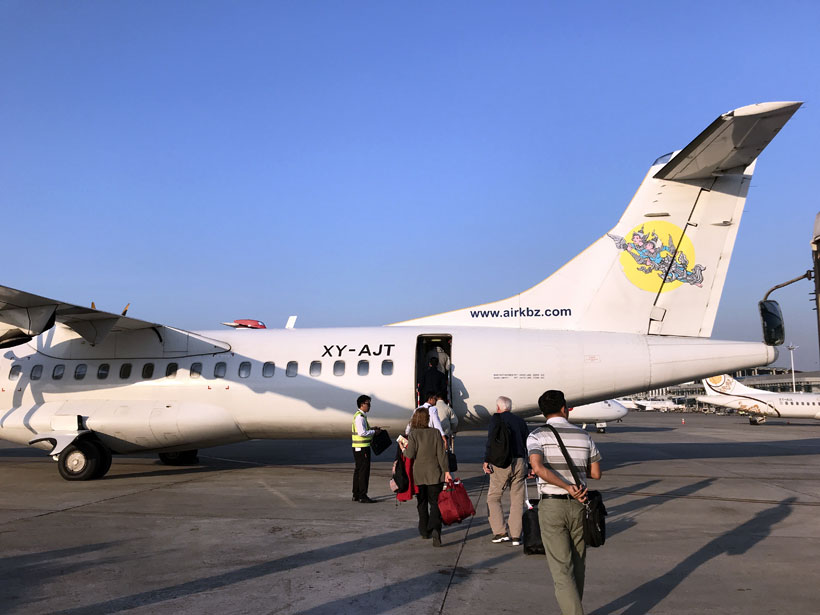 [AirKBZ flight from Yangon to Bagan]

Exiting the airport will find a lot of taxis that cost MMK 5,000 (standard price, non-negotiable) to Bagan. It was about 7:30pm by the time I reached my hotel – Shwe Nadi Guest House.

After checking in, I stepped out and walked around this dark, gloomy town for some dinner and stopped at “Perfect restaurant” for some local food, before retiring for the day.

Visiting all the temples of Bagan.