Orientation
Let me start by saying that ten days in this magnificent island country is too less to be able to fully experience it, but I have tried my best to squeeze in a lot of things and still be able to visit a lot of places in Japan. Japan is quite expensive compared to other Asian nations, but on par with the European countries or U.S.

Japanese being the national language, you will find street signs in English as well, but not everyone speaks English. Except for main cities like Tokyo, Kyoto or Osaka, most locals speak Japanese only. So make sure to ask your hotel concierge to write directions, addresses, names etc. on paper and carry it with you at all times.

You will experience the most humble, helpful and friendly people in the whole world in Japan. Locals will go out of their way to help you and are courteous enough not to get annoyed by that. The humbleness of Japanese people is one of the experiences any traveler must have in their lifetime.

I required a visa prior to visiting Japan, and with the usual list of documentation required to get a visa – flight tickets, hotel bookings, itinerary, bank statements, passport copies, etc. – I headed to the Japanese Consulate and upon a quick interview I got a dual-entry visa for the duration of the trip only.

Currency
Japan’s currency is Yen. There is no subdivision of the Yen. The abbreviation JPY or ¥ is used everywhere and the exchange rate was USD 1 = ISK 100 at the time of the trip. You will also see the sign ‘円’ used across Japan to indicate prices. 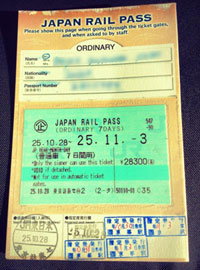 This is the most important part of your planning. Get a Japan Rail pass if you plan to travel around the country. You can visit the Japanese consulate or JR offices in your city to purchase one. JR passes can be bought online as well. Remember JR pass can be only bought outside of Japan and must be bought before you enter Japan.

They come in three types – 7 day, 14 day or 21 day pass. Starting at US$280 for a 7-day coach class pass, this is one of the best investment you will make for your Japan trip. It covers all the Shinkansen’s (bullet trains), local buses that accept JR passes, and JR suburban train lines. All you have to do is show your pass and you travel free!

Your number of days period starts from your first travel. Go to the JR Pass office at Tokyo station and exchange your ticket (given to you when you purchase it) for an actual JR Pass. You can mention the starting date to the desk personnel.

Keep this pass with you in the same way you’d keep your passport, but more handy.

The Japan Rail Pass is valid on: