Set in a valley surrounded by low mountains, Sucre is Bolivia’s most beautiful city, and the symbolic heart of the nation. It was here that independence was proclaimed, and while La Paz is the seat of the government and treasury, Sucre is recognized in the constitution as the nation’s capital. It is a glorious ensemble of whitewashed buildings and preserved colonial architecture. With strict controls on development, Sucre was declared a UNESCO World Heritage site in 1991.

It was obvious that the first sight any visitor would head to was Casa de La Libertad (www.casadelalibertad.org.bo, Plaza 25 de Mayo, Entrance Bs 15, camera Bs 10, 9am-noon & 2:30pm-7pm Tue to Sat, 9am-noon Sun) on the main square of Sucre. This is where the Bolivian declaration of independence was signed in 1825. This museum has been designated as a national memorial.

As soon as you enter the main room, you are presented with benches on either side and a podium at the front end. Walk inside and there’s the declaration of independence in a glass-enclosed stand. 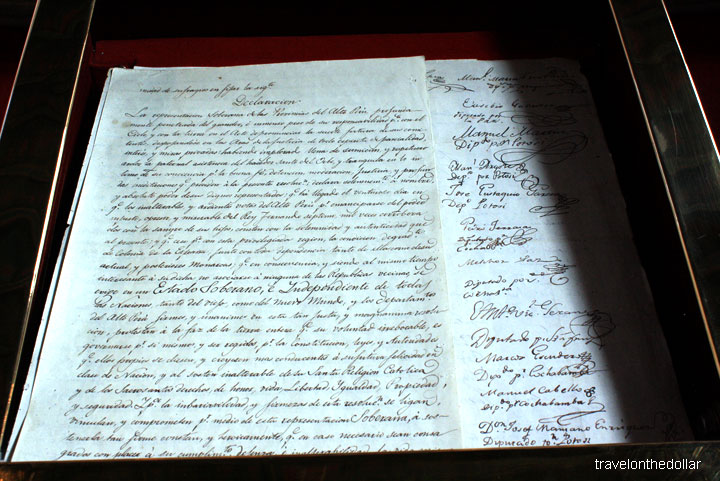 Next to Casa de La Libertad on the main square – Plaza 25 de Myo, is the Catedral that dates from 16th century and has a bell tower which is a local landmark. The white single-naved space inside has a series of oil paintings of the apostles. The Catedral is open on Sundays only, otherwise you can enter as a part of the Museo de la Catedral visit (Entrance Bs 20, 10am-noon and 3-5pm Mon-Fri, 10am-noon Sat). Enter on Nicolas Ortiz street, this museum holds one of Bolivia’s best collection of religious relics. The highlight of the museum is the Capilla de la Virgen de Guadalupe, which was completed in 1600s. 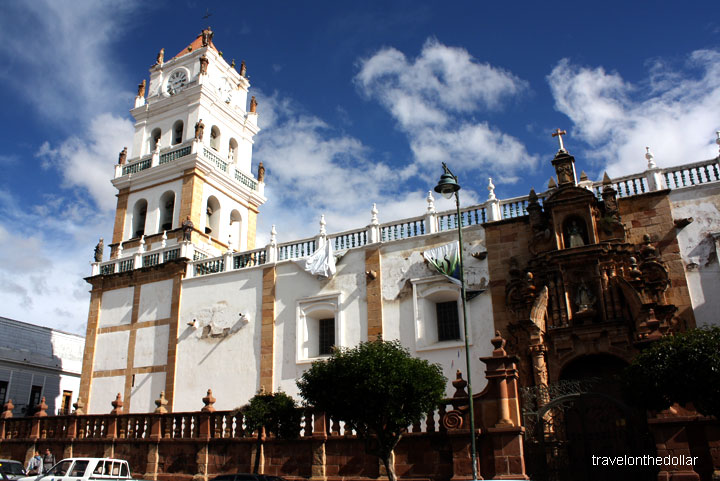 Down the road from the Catedral, on Calle Perez is Templo Nuestra Señora de la Merced, a church blessed with the most beautiful interior of any church in Sucre and possibly of Bolivia. Several paintings by Melchore Perz de Holguin are on display inside, notably El Nacimiento de Jesus and El Nacimiento de Marla. Climb up the bell tower for excellent view of the city. A must visit site!

Returning back to Plaza 25 de Mayo, I stopped by for lunch at Cafe La Taverne, knowing that most of the churches and museums will be closed between noon and 3pm.

A long lunch and walking along nearby street after, I stopped at Calle Ravelo to Iglesia de San Francisco, which was turned over to the military in early 1800s who were not keen on maintaining it so it fell and restored in 1925. The mudejar paneled ceiling is its most interesting feature along with Campana de la Libertad, Bolivia’s Liberty Bell, which called to patriots during the 1825 revolution. 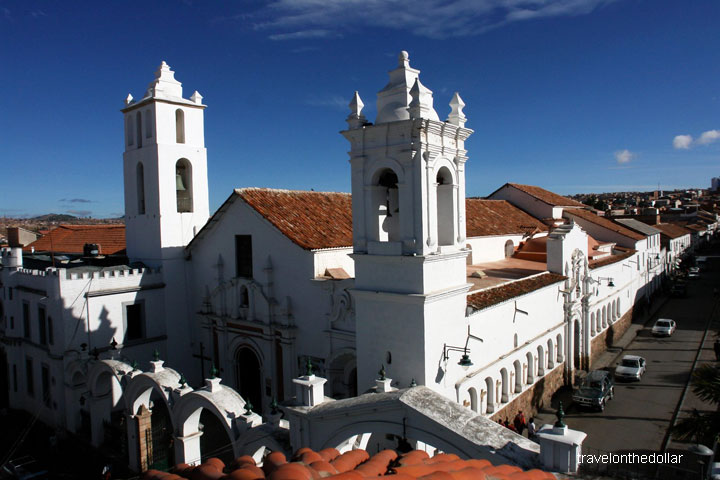 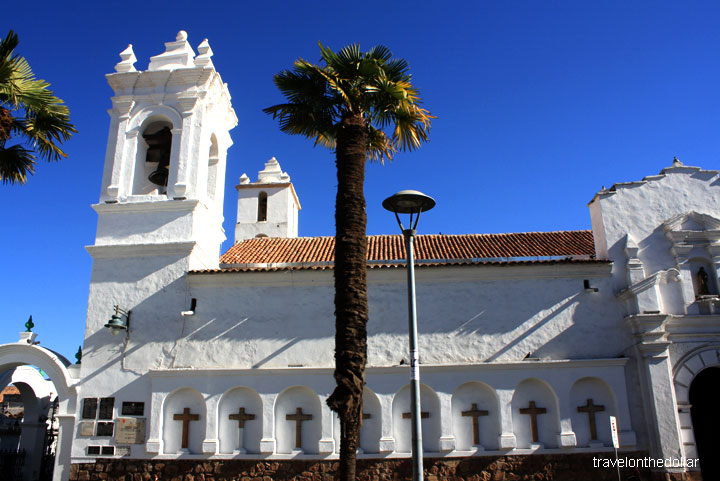 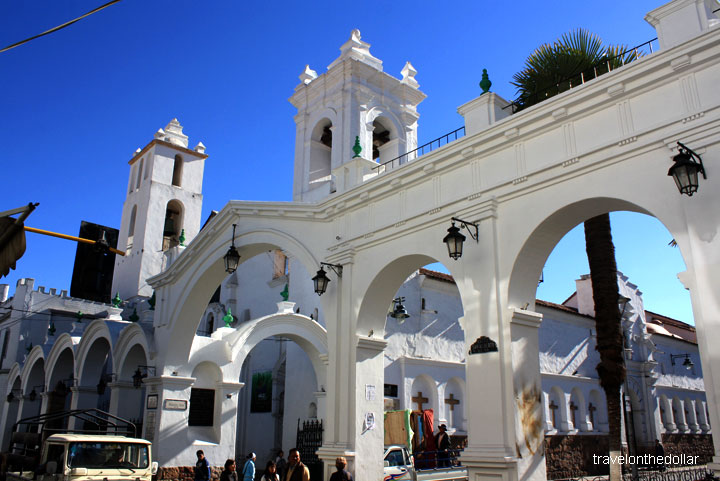 I wanted to watch the sun set from a high point in Sucre, and also make the best of my uphill walk by seeing Museo de la Recoleta (Entrance Bs 10, 9-noon & 2:30-4:30pm Mon-Fri, 3-5pm Sat), so walking south-east on Calle Audiencia (which becomed Calle Grau), I eventually reached top of Calle Polanco where the Monastery of Recoleta has not just served as a convent, but a prison too. The highlight of this church is the choir and its magnificent wooden carvings dating back to the late 1800s. 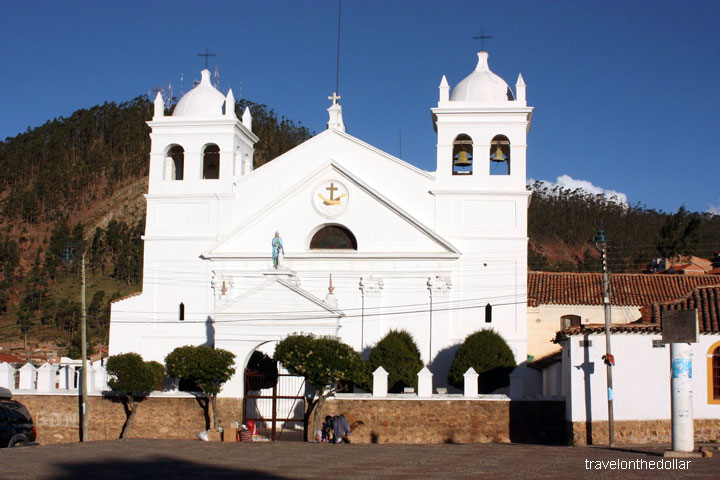 Similar to many other places in the world, there are way more sights to see in Sucre other than the ones mentioned above, and one can easily spend a few more days experiencing this glorious, colonial city, but I had a different agenda and being satisfied with exploring the city in a day-and-half, I was almost content and vowed to come back some day to complete my craving for more.

For now, I headed back to the hostel, for a meal prepared by the locals of Bolivia – rice, chicken, soup and something called as “refresco de alcusta” – a sweet, savory drink that is served with dinner.