The third day of the tour started with temperatures dipping lower than yesterday to -20C, and with no hot water available at the guest house, no one dared stepping in the one and only bathroom there. After a good breakfast, it was time to start the 7-hour ride back to Uyuni, but with a few more sights to see on the way.

First up was Sol de Mañana, meaning Morning Sun in Spanish, is a geothermal field extending over 10 sq.km, between 4800m and 5000m height. This area is characterized by intense volcanic activity and the sulfur springs field, not geysers as sometimes it can be read, is full of mud lakes and steam pools with boiling mud. You can actually up to the hot geysers, with caution. 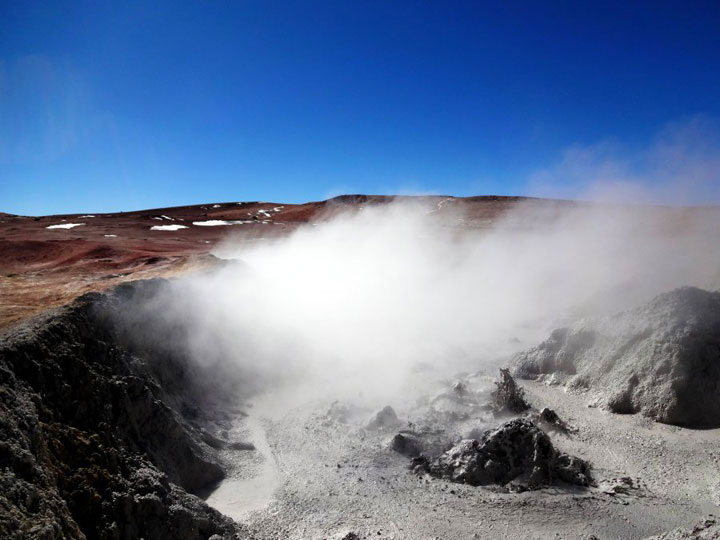 The warmth from the geysers sure did help in the freezing temperatures up there. After spending about 20 minutes, it was time to move on for another long drive and make a quick restroom-pitstop at the town of San Cristobal.

This is where you will find cellphone reception amongst all the places in the tour.

The final stop, right outside Uyuni, was the Train Graveyard. Located just 3km from Uyuni the graveyard is connected to it by the old train tracks that were built by British engineers at the end of 19th century as a part of the mining industry and collapsed, partly due to the mineral depletion. Many trains were abandoned thereby producing the train cemetery.

We reached the tour office in Uyuni around 3pm and I decided to stay the night in Uyuni, instead of taking the 6pm bus to Potosi. Finding a last-minute hotel in Uyuni is not easy because of its proximity to Salar de Uyuni. After inquiring in about at least four hotels, I headed to Tonito Hotel at the end of Ave Ferroviaria near the army post. Rooms were easily available at this huge hotel for $45 a night for a double room.

After checking in, I decided to take a tour of Uyuni and walk around to explore the town. Other than the clock town in the town center and some train sculptures on the main street, there’s literally nothing to see or do.

A relaxing evening, a hot shower and a good night’s sleep was all I needed to call it a day.