Day 3 started early with a taxi ride from Loki Hostel to La Paz airport for my flight to Uyuni, on Amaszonas Airlines (leaving LPB at 06:50 and reaching UYU at 07:35). The flight time is about 40 minutes to Uyuni airport (UYU) on a small Bombardier CRJ plane (flight number Z8 300). After checking-in, make sure to pay the airport exit fee of Bs 15 before you head out to the gate.

How to reach Uyuni

Close to landing at Uyuni airport, if you get a seat on the right-side of the plane, you will have a spectacular aerial view of the huge Salar de Uyuni, world’s largest salt flats. And the sunrise on the left-side right after take-off was unbelievable as well.

Uyuni has a very small airport, and most tour operators will have their chauffers waiting for you with your name tag. No, these are not free rides to the tour operator’s offices, but you will be asked to pay Bs 10 per person upon reaching the office. The town square is about 2km from the airport, but in July temperatures, that Bs 10 is absolutely worth it!

Uyuni itself is a very small, laid-back town with shackled homes; and with no particular sights to see, except for the train sculptures on the main street, Ave Ferroviaria, you can spend a few hours walking around or just have breakfast at one of many cafes around the clock tower.

Having arrived at 7:45am, I had a few hours before my tour started at 11am. So I headed to a cafe for breakfast and then to the post office, next to the main bus station, for a stamp in my Postal Stamps Travelogue book.

I had booked my 3-day tour around Salar de Uyuni with Red Planet Expedition (Read review here) for Bs 1200 (does not include entrance fee at Laguna Colarada and Isla Incahuasi). After reaching the tour operator’s office by 10am, there were about 15 people in all for the 3-day tour, while a few others signed-up for 1-day tour. Around 11am, our jeeps were ready to go and our drivers has assigned us in groups of six-persons each in one jeep.

So after a 30 minute drive along the main “highway” we reached Colchani.

This tiny salt mining town resides on the outskirts of Salar de Uyuni, and home to the salt cooperative. Colchani is the easiest point to access the great salt flat, and the place to go if you just want a glimpse of it without going on a tour. Right on the edge of the salt, the Hotel Palacio de Sal is one of several salt hotels in the region – built almost entirely out of blocks of salt.

The tour guide gave us a glimpse of the salt mining factory, with some explanations on how the locals build houses of salt-bricks. A 30-minute halt in this tiny town and we were off to the world’s highest and largest salt flats – Salar de Uyuni.

The sheer magnitude of this place is an experience everyone must have, at least once in their lifetime. Salar de Uyuni is the world’s largest salt flat at 10,582 square kilometers (4,086 sq mi) and located at an elevation of over 3,600 meters (11,995 ft) above mean sea level. Formed as a result of transformations between several prehistoric lakes, it is covered by a few meters of salt crust, which has an extraordinary flatness with the average altitude variations within one meter over the entire area of the Salar. The large area, clear skies and the exceptional flatness of the surface make the Salar an ideal object for calibrating the altimeters of Earth observation satellites.

Our guide stopped the jeep along with some others at the piles of salt where you could watch workers mining the salt from the Salar. You can see small pyramids of salt laid around, and are picked by trucks. 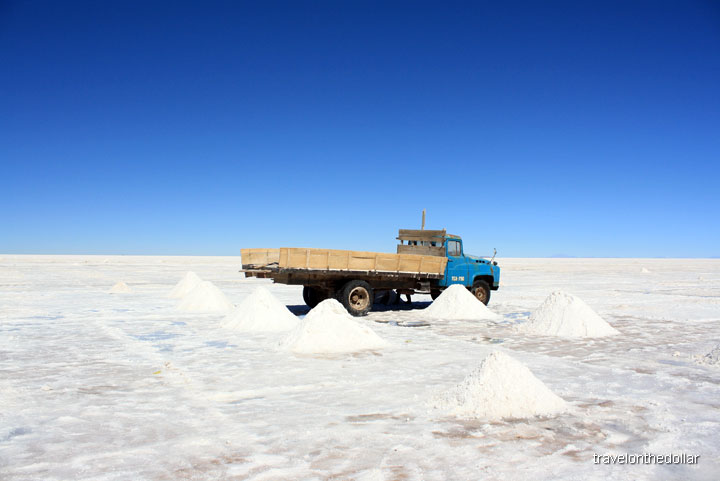 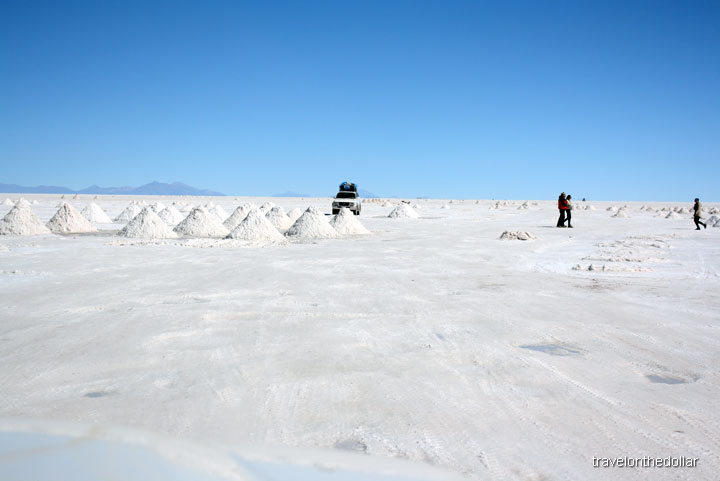 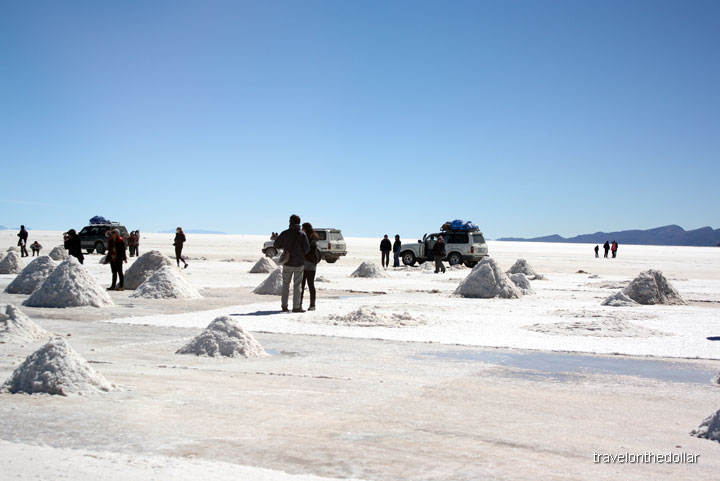 After spending about 30 minutes at the salt piles, we drove across the white salt desert to reach hotel Playa Blanca built in the middle of nowhere. Almost everything in this restaurant hotel was made of salt, and this is where your guide will serve lunch – fruits (banana, apple), fried chicken, water, pasta and rice. Toilets here cost Bs 5.

After driving for another 30 minutes, we stopped the jeep on the flat plains of salt where all you can see in any particular direction is, you guessed it, salt flats only. This is when the fun of clicking crazy pictures start! It’s good to bring some props for pictures, but Oscar was experienced enough to click away these pictures for us:

We spent almost the whole afternoon clicking away, prying our creative brains to try different poses and getting that perfect click. It was almost 2pm when we started our onward journey to reach Isla Incahuasi – the oasis in the desert. Isla Incahuasi is a hilly and rocky outcrop of land and former island in the middle of Salar de Uyuni. This place hosts gigantic cacti and a tourist center. There are unusual and fragile coral-like structures and deposits that often consist of fossils and algae. The place is the top of the remains of an ancient volcano, which was submerged when the area was part of a giant prehistoric lake, roughly 40,000 years ago. You are given 45 minutes to hike the small hill (a must do for spectacular views of the salar). Entrance on the island costs Bs 30 and a cafe con leche is Bs 10.

Oscar, our tour guide, started to get impatient because of the long drive ahead of us to the base camp #1. But also because we had one last stop to take sunset pictures before we head to the guest house. We started to drive south towards the exit of Salar de Uyuni, with the sun behind us to the right. Oscar constantly monitored the Sun’s movements to make sure we stop at the perfect moment for next round of pictures. 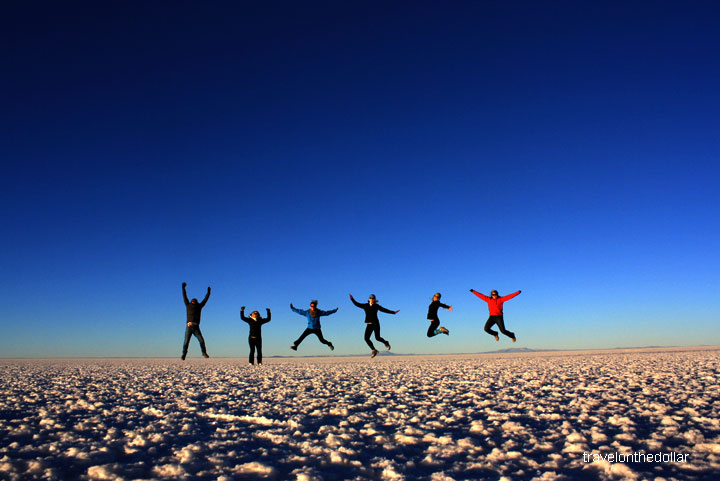 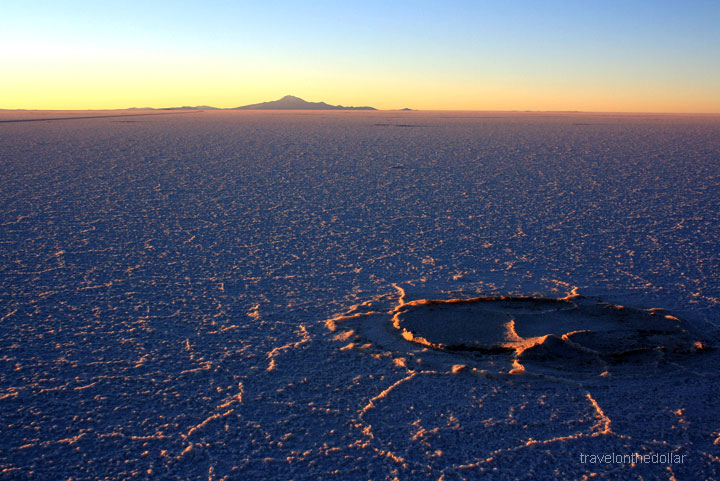 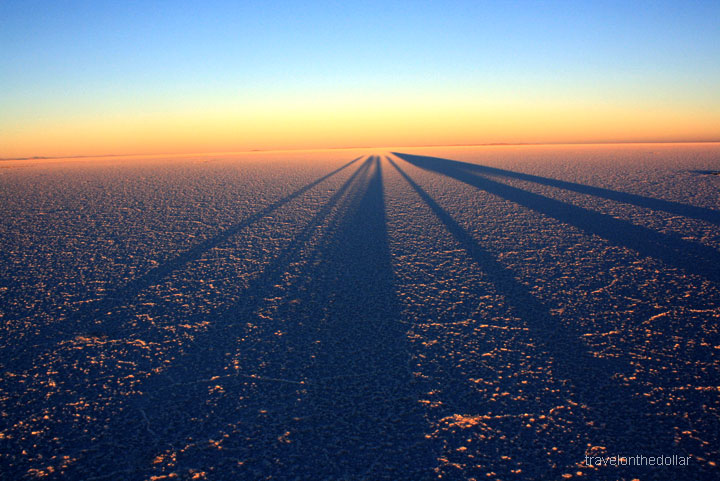 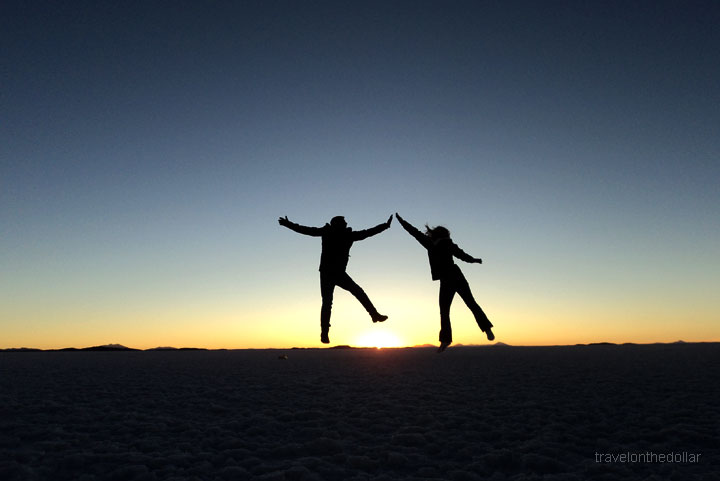 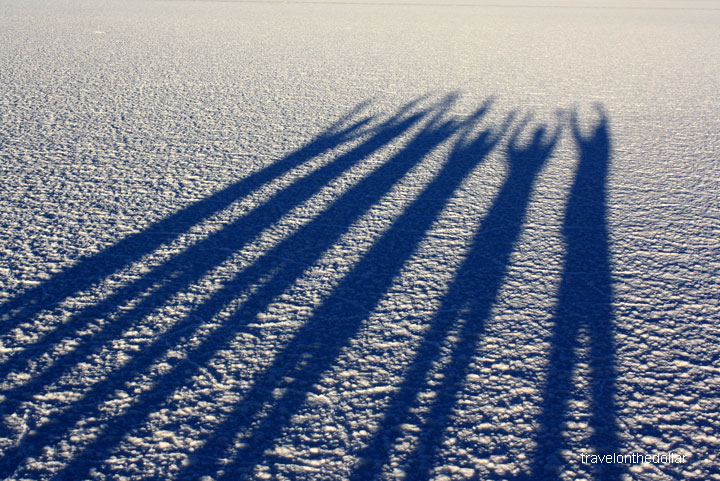 After an hour of a bumpy ride, we reached the guesthouse – Agua Quisa villages – at base camp #1 where we met our fellow travelers on other jeeps and each one of were assigned rooms or beds. Hot tea is available throughout the evening, and dinner is served at about 8pm – chicken broth soup, meat and water.

It was past 9pm with 25F (or -4C) outside temperature; luckily, the guest house provides electricity and hence heaters for 2-3 hours until 10pm, when they turn off all the lights and electricity. The beds have 3 layers of blankets made of Lama wool, which keep you warm all night. And with freezing temperature and no electricity, there’s nothing left to do but call it a day.