WARNING: This place is not suitable for people with claustrophobia, heart problems and knee problems.

With recommendations from fellow travelers, I headed out of my hotel in Göreme early to reach Kaymaklı at 8a.m. when the gates open. This is a excellent way to avoid all the tour buses that arrive early and fill in the narrow walkways of this underground city. 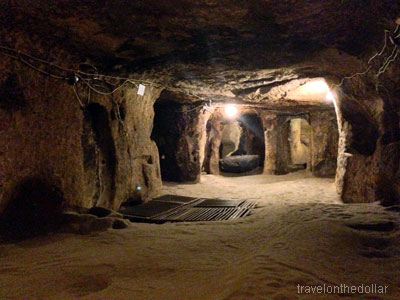 The troglodyte cave-cities were excavated as early as Hittite times, and expanded over the centuries as various marauding armies traversed Central Anatolia in search of captives and plunder. There are 36 underground cities in Cappadocia and the widest one is Kaymaklı (pronounces kaay-maak-luh) underground city, while the deepest is the Derinkuyu Underground City.

The city is built under the hill known as the Citadel of Kaymaklı and the people of Kaymaklı (Enegup in Greek) village constructed their houses around nearly one hundred tunnels of the underground city. The Kaymaklı Underground City has low, narrow and sloping passages, some of them about 4′ in height, but mostly 5’10” tall. While the underground city consists of 8 floors below ground, only 4 of them are open to the public today, in which the spaces are organized around ventilation shafts.

The first floor of the underground city is the stable. The small size of this area suggests that there could be other stables in sections that have not yet been opened. The passage to the left of the stable contains a millstone door and leads into the church. To the right of the corridor are rooms hollowed out as living areas.

The church on the 2nd floor has a single nave and two apses. In front of the apses is an altar, and on the sides are seating platforms. There are also some living areas on this floor. 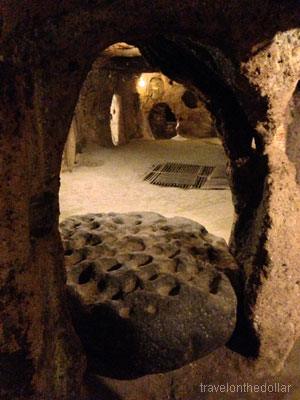 The most important areas of the underground city are on the 3rd floor. Besides numerous storage places, wineries and kitchen, the block of andesite with relief-texture found on this floor is very interesting. Recent research has proved that this stone was used as a melting pot for copper. The stone was not brought here from outside but was part of the andesite layer unearthened while hollowing. To be able to use it as a melting pot, 57 holes were carved on the surface of the stone. The copper ore, about 10 cm in length, would be put into one of those holes and would be hammered using a hard piece of rock. This technique has been known since the Prehistoric Periods.

The copper brought to the Kaymaklı Underground City was probably dug from a quarry between Aksaray and Nevşehir.

The fact that there are a lot of storage rooms and places to put earthenware jars in the wineries on the 4th floor indicates that the people living in this underground city were economically stable. The ventilation shaft can also be seen from the 4th floor. It is a vertical well and passes all floors down like on the elevator in an apartment. The depth of the ventilation shaft is about 80 meters in total.

Even though the whole city has not been completely opened, and since only 4 floors have been uncovered, it is certain that Kaymaklı is one of the largest underground settlements in the region. It is accepted as the widest underground city of Cappadocia, among the explored ones. The number of the storage rooms in such a small area supports the idea that a great number of people resided here. Archaeologists think that this could have been up to 3500 people.

Being the first to enter the city, I had the whole place to myself before the bus loads of tourists come in. A guide would cost anything between 40L to 100L depending on how many people in your group are. Being solo, I got mine for 40L. It takes about 1.5-2 hours to see the city (assuming you are the only one there, else may take 4-5 hours with other tourists). Even though you are not the hiring-a-tour person, it’s worthwhile and wise to hire one for easy access to pathways and understand the similar-looking rooms from one another.

How to reach Kaymaklı Underground City:
From Göreme bus station, the dolmuş to Nevşehir runs every 30 minutes from 5am to 11pm. It takes 30 minutes to reach Nevşehir and having missed the 7am bus, I had a quick breakfast at Sultan Restaurant which is right across from the Otogar (bus station). The dolmuş called “Göreme” has a board on the windshield saying “Uçhisar, Nevşehir” and costs 2.50L one way. Make sure to inform the driver that you want to go to Kaymaklı, so they can let you know where to get down. It makes a quick stop on the way at Uçhisar and upon reaching Nevşehir, the dolmuş will drop you at an intersection from where you will catch the next bus to Kaymaklı.

See the location of the drop-off place marked by ‘A’ in the map below. Just cross the road and wait on the other side for the bus to Kaymaklı. The driver may not drop you off here, but insist to be dropped here for easy access to the next bus, else you may have to walk a long way to catch the bus to Kaymaklı.

The pottery town of Çavuşin (pronounced cha-vu-shin) is just 3km from Göreme on the way to Avanos and well-known for three things – the church that stands off of the main highway leading to Avanos, the open air museum of Zelve (about 2km from Çavuşin) and the area of Paşabağ that has the only fairy chimney with three-mushroom tops (see below). Other than some pottery store on the curb-side of the main highway, the place to visit before the church is the Çavuşin Seramik, where you can see pottery in the making, for free!

The lower church, named Nicephorus Phocas, dates from the 960′s AD. The entrance fee is TL 8 and with no literature or signage at the church, you have nothing to learn about the history, and frankly, it’s not worth spending any money for the entrance, nor any guides. If you have visited some of the churches of Göreme Open Air Museum, then even stopping here for a visit is a complete waste of time and money, except of course if you’re visiting Paşabağ, which is free.

The main church has tunnel vaults, a high nave, and 3 apses. The complex includes 8-10 rooms on at least 3 levels.

How to reach Çavuşin:
Take the public bus of Avanos from the main street outside of Göreme Otogar (bus station). The Avanos public bus runs every hour and reaches the Göreme Otogar between 10-15 minutes past the hour. It takes 10 minutes to reach Çavuşin and costs 2.50L. Inform the driver that you’d like to visit Çavuşin and they will stop the bus right in front of the church. 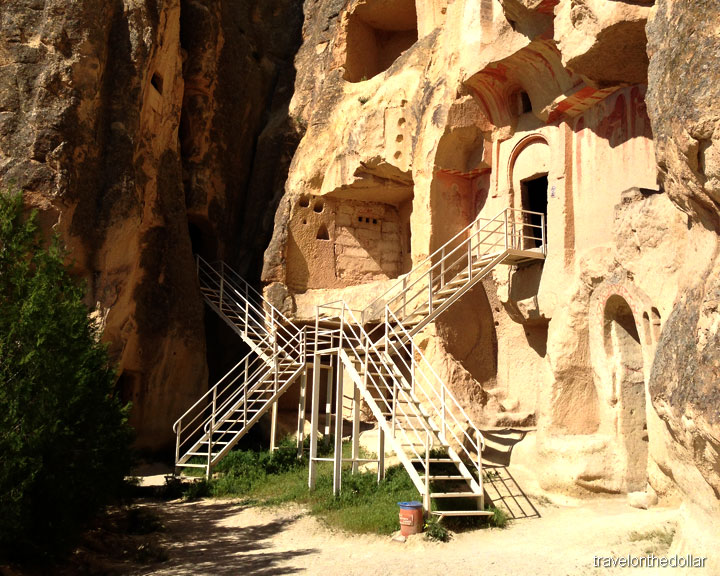 Just a 10 minute walk from right next to the Çavuşin Church (turn right facing the road from the church, and you will see an unmarked, unpaved road) lies an area called Paşabağ (pronounced paa-sha-ba), literally Pacha’s vineyard, pacha meaning ‘General’ in Turkish, that has the best views of fairy chimneys across all Cappadocia. 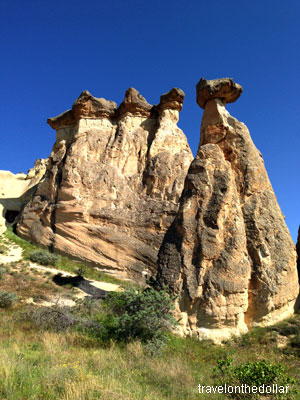 This site is also called Monks Valley. The name was derived from some cones carved in tuff stones which stand apart. Currently, there is a vineyard and a number of tuff cones standing right next to the road.

Some of these cones split into smaller cones in their upper sections, in which stylites and hermits once hid. The hermitage of Simeon monks was also here. A chapel dedicated to St. Simeon (Simon), and a hermit’s shelter is built into one of the fairy chimneys with three heads. The entrance of the cell is decorated with antithetical crosses. Saint Simeon was living in seclusion near Aleppo in the 5th century, when rumors that he made miracles started to spread. Disturbed by all the attention, he began to live at the top of a 2m high column, and later moved to one 15m in height. From there he only descended occasionally to get food and drink brought by his disciples. The hermits of Cappadocia distanced themselves from the world by cutting into fairy chimneys rather than living on top of columns. They hollowed out the chimneys from bottom to top creating rooms at 10-15m high. 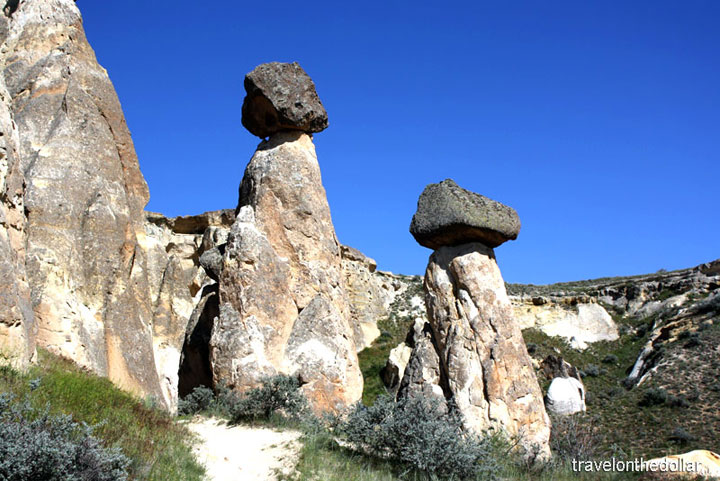 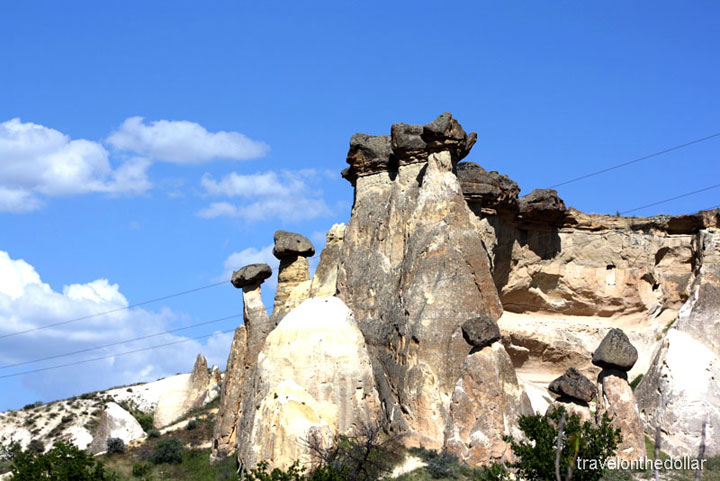 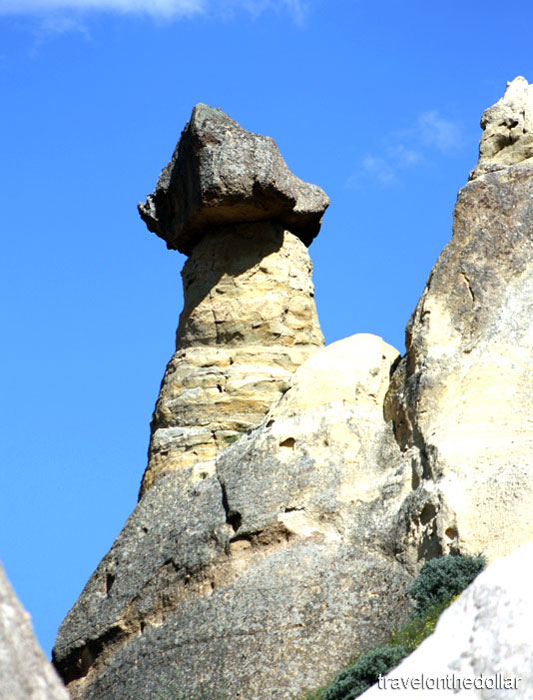 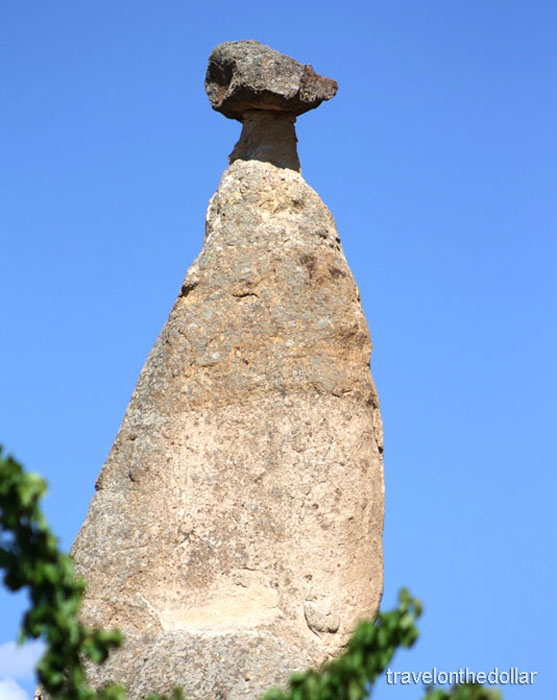 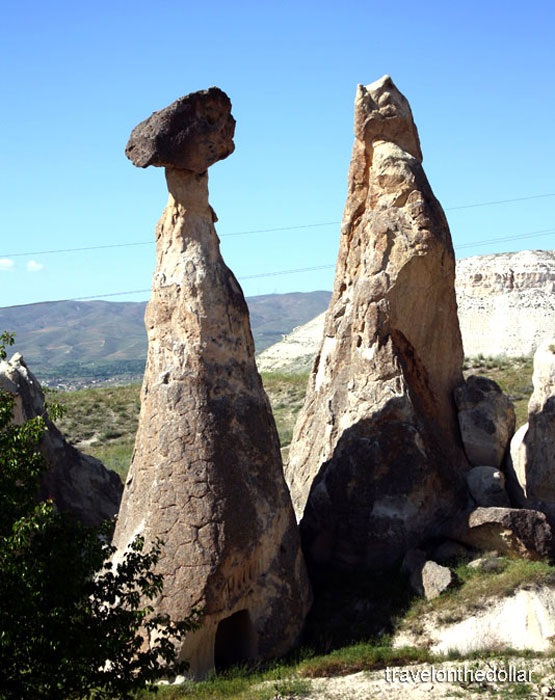 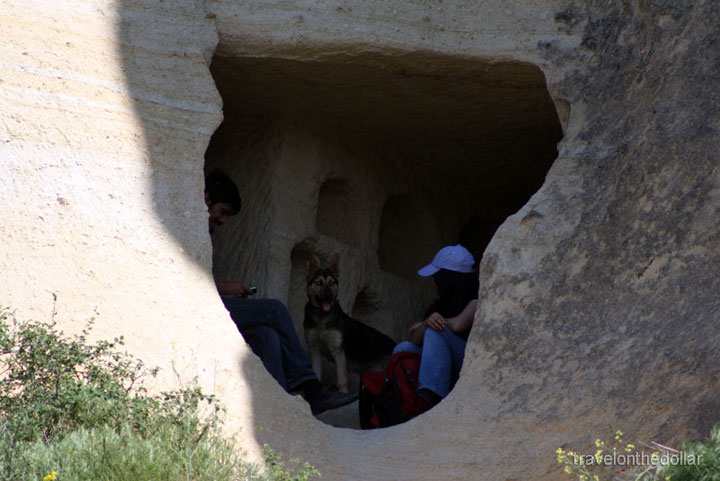 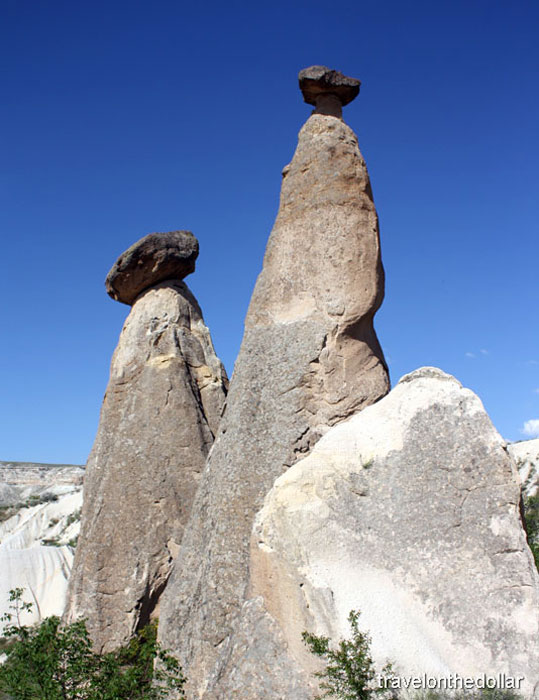 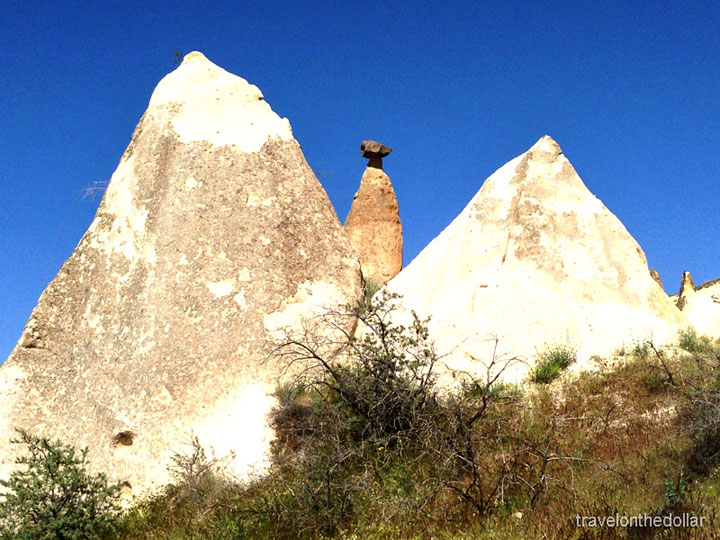 I decided to walk the 4km back to Göreme, which was not bad, except for the sun!

Visit to the nearby towns of Çavuşin & Paşabağ, and Kaymaklı underground city

Travel from Göreme to Kayseri & between Istanbul’s domestic to int’l airports.