We had booked three tours in Al Ula though Experience Al Ula:

Of these three tours, “Hegra by day” and “Al Ula Old Town” tours were scheduled for today, and “Dadan trail” was scheduled for next day.

Note: We did not go for “Hegra by night” tour as some fellow travelers who’d seen it did not recommend!

The ´Hegra’ tours start from the Winter Park office location, from where visitors are taken in luxury coach to all the sites. The tour starts at 8:30am from here, and lasts 2 hours.

Once a thriving international trade hub, the archeological site of Hegra (also known as Mada’in Saleh) has been left practically undisturbed for almost 2,000 years. If you’ve been to Petra then you will notice that the rock-cut constructions at Hegra look similar to the more famous site of Petra in Jordan.

Hegra was the second city of the Nabataean kingdom that could hold the key to unlocking the secrets of an almost-forgotten ancient civilization. A majority of the remains date from the Nabataean Kingdom (1st century AD). The site constitutes the kingdom’s southernmost and second largest city after Petra, its capital city. Traces of Lihyanite and Roman occupation before and after the Nabatean rule, respectively, can also be found.

First stop on this tour was Qaṣr Al-Farīd (Arabic: قَصْر ٱلْفَرِيْد), meaning ‘the Lonely Castle’ is largest tomb at the archaeological site. 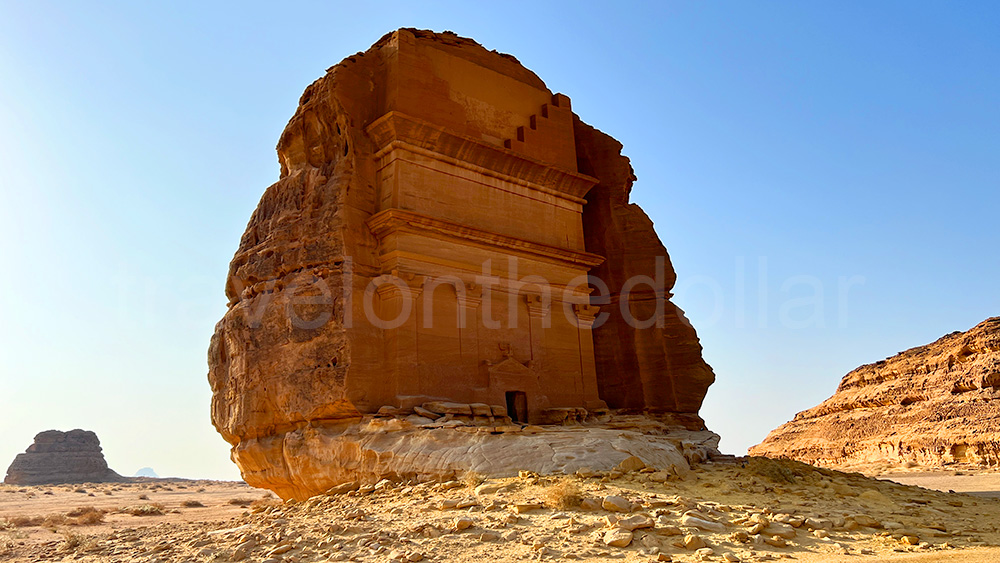 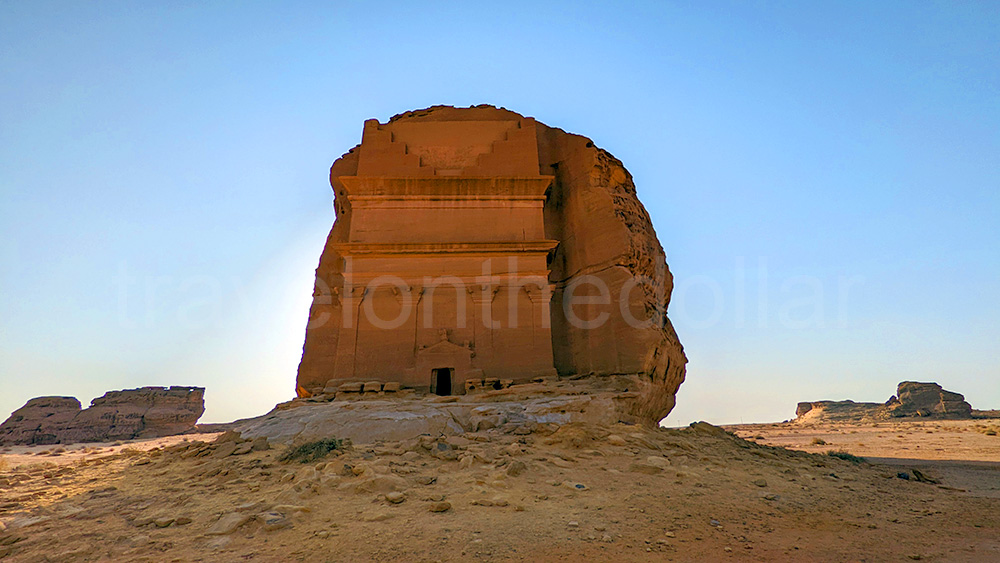 Next stop are the tombs – Hegra contains 111 carefully carved tombs, far fewer than the more than 600 at the Nabataean capital of Petra. But the tombs at Hegra are in better condition. Classical Greek and Roman architecture clearly influenced construction, and many tombs include capital-topped columns that hold a triangular pediment above the doorway or a tomb-wide entablature.

A Nabataean “crown” consisting of two sets of five stairs, rests at the uppermost part of the façade, waiting to transport the soul to heaven. Sphinxes, eagles and griffins with spread wings—important symbols in the Greek, Roman, Egyptian and Persian worlds—menacingly hover above the tomb entrances to protect them from intruders. Others are guarded by Medusa-like masks, with snakes spiraling out as hair. 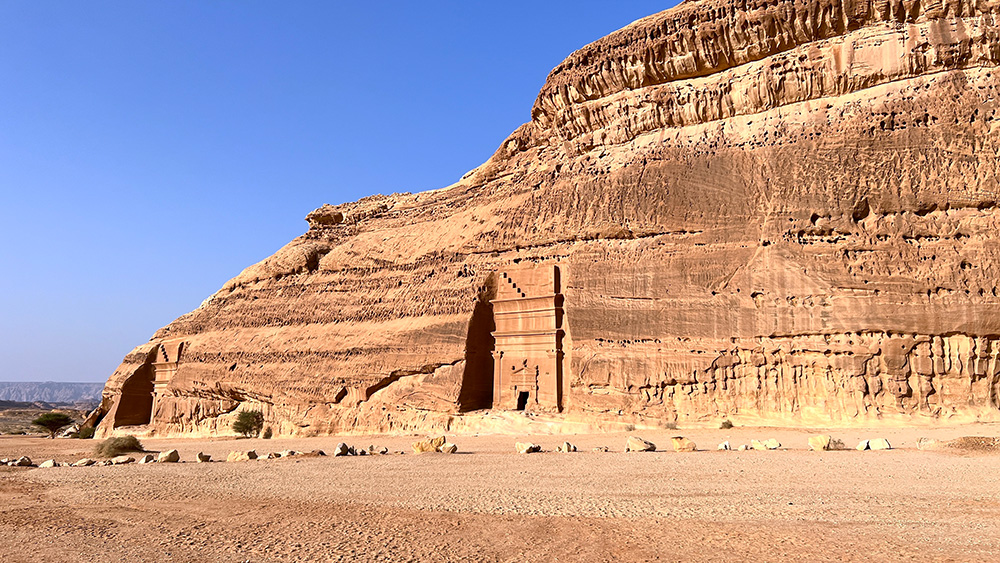 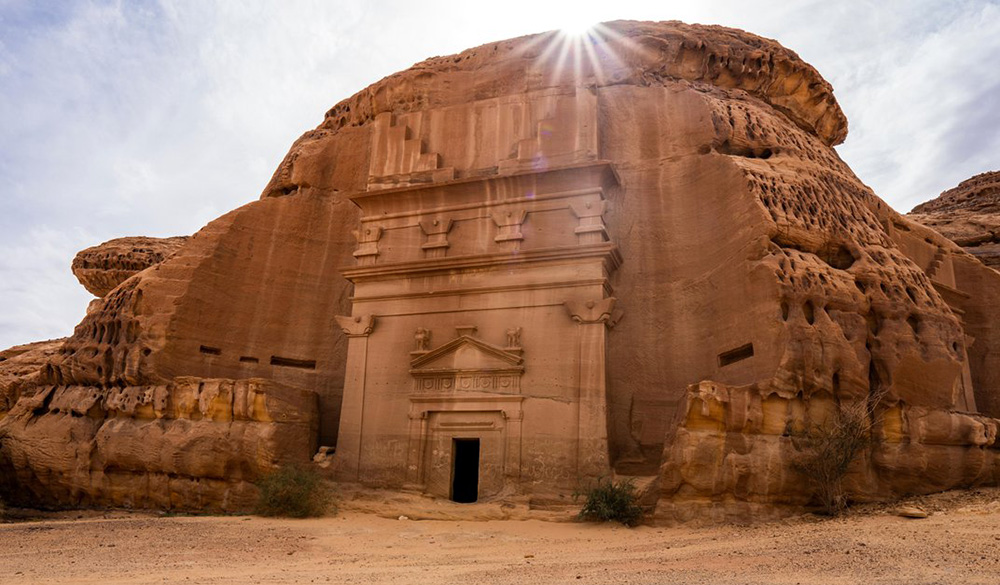 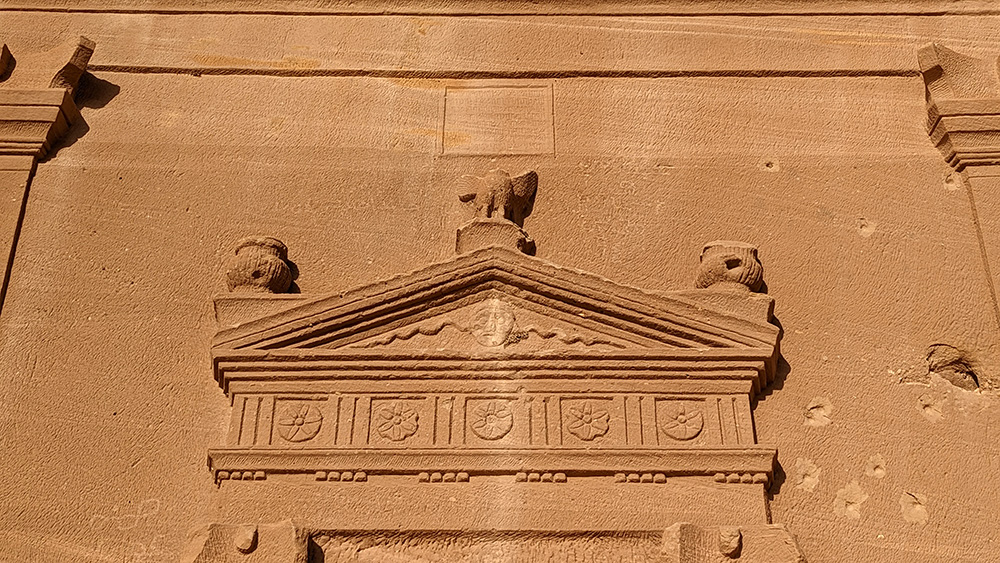 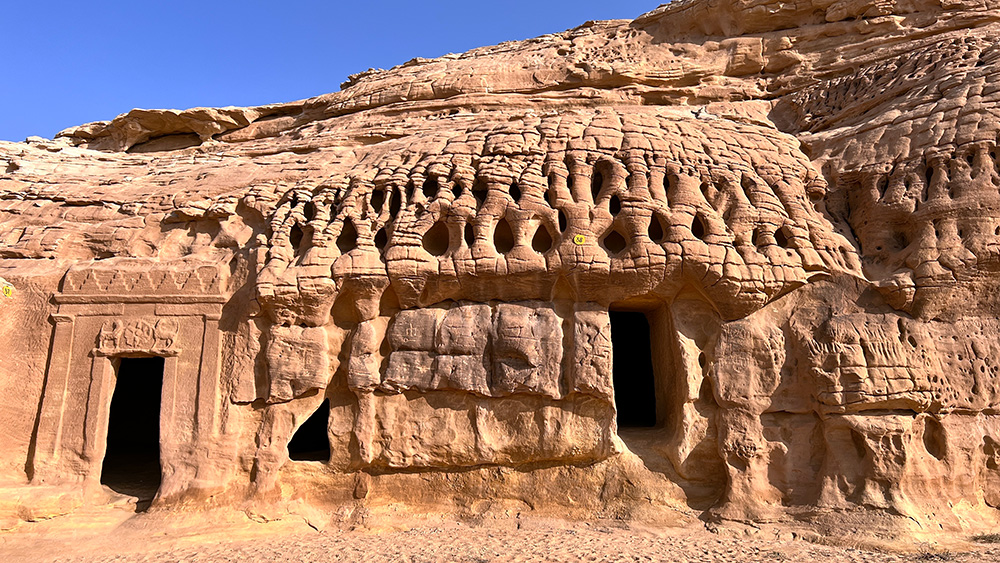 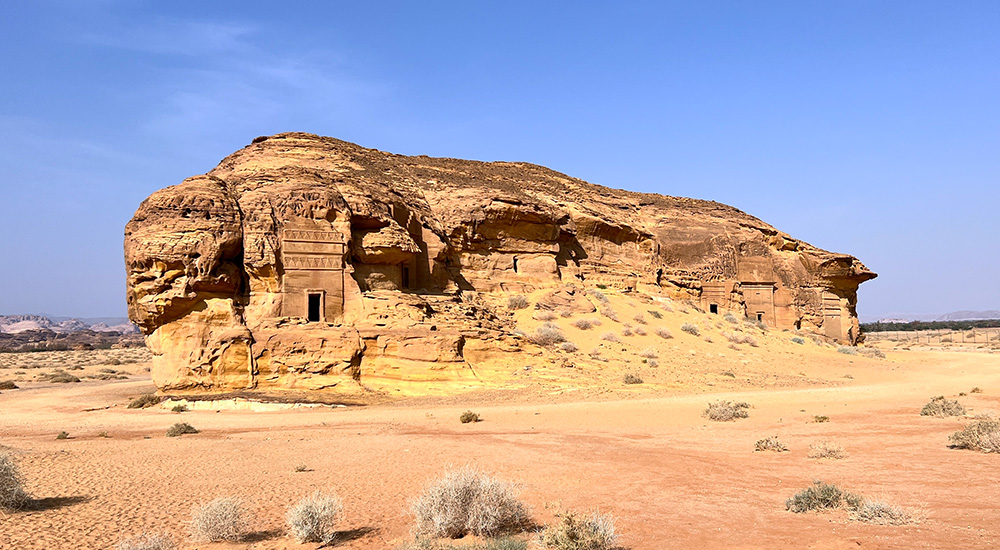 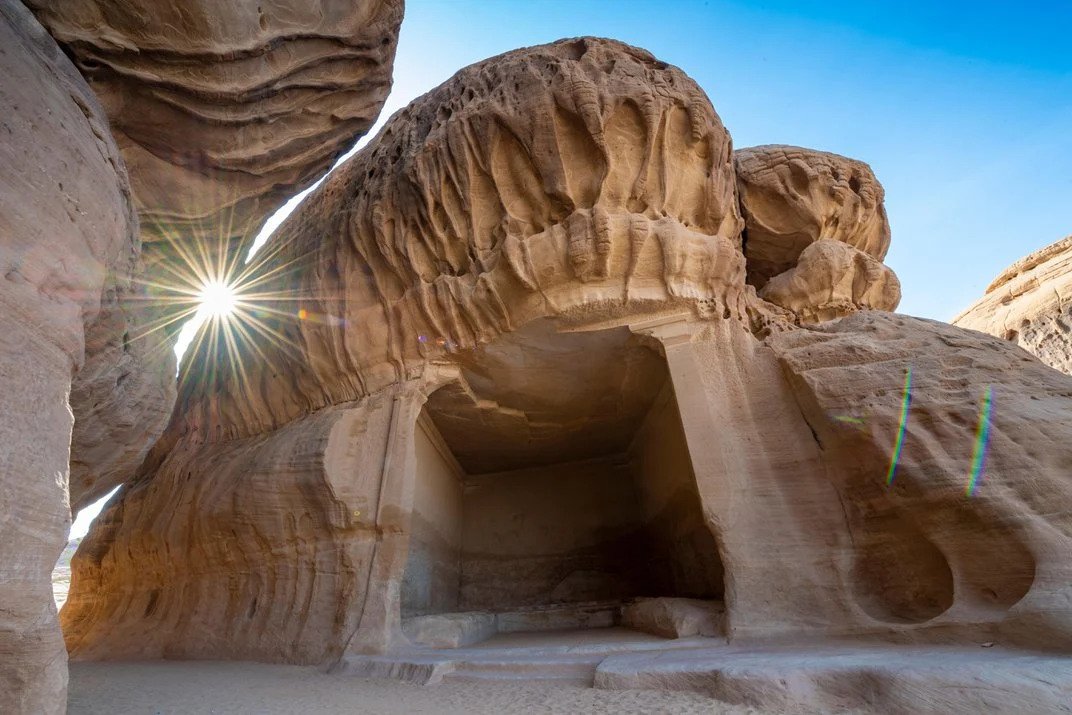 [Not a tomb, but a place to gather and have discussions.] 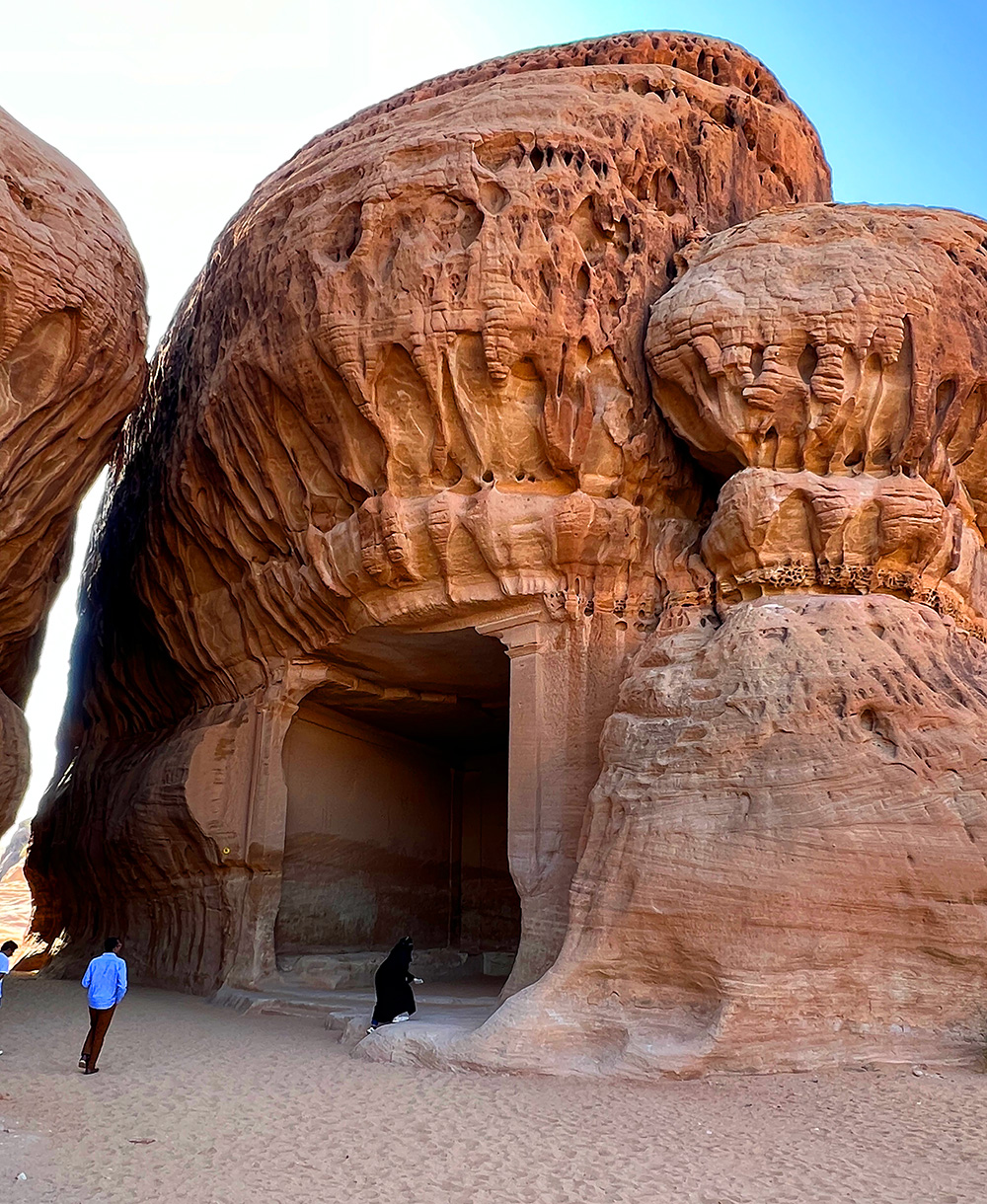 [Not a tomb, but a place to gather and have discussions.]

Important note: One of the most photographed place is the dual tombs, and as shown on Experience Al Ula website, we were not taken to this site. This picture was taken from the bus! 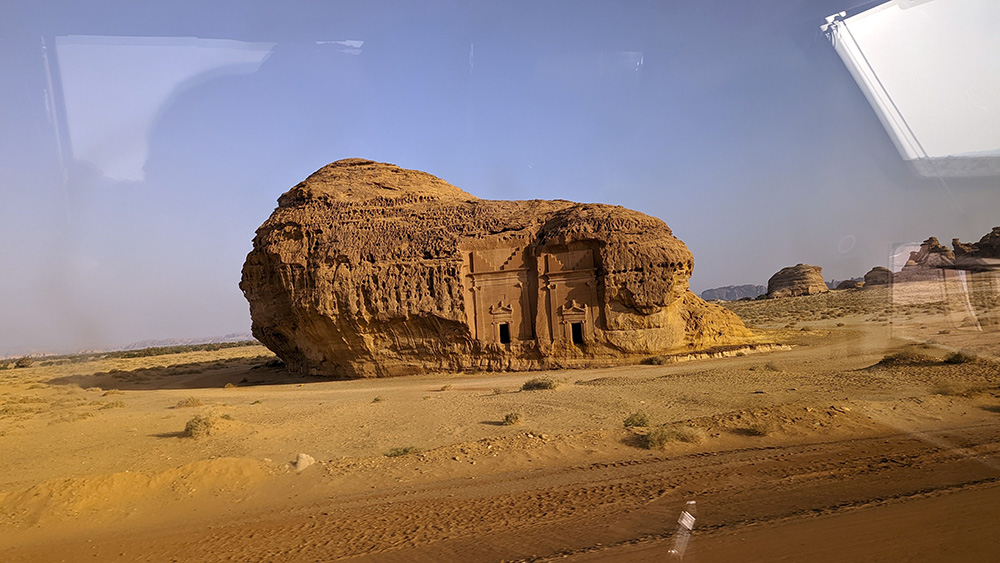 After a 2-hour tour, you are dropped-off at the Winter Park parking area.

Before heading out to the Old Town, we strolled around the ‘art district’ of Al Ula that was decorated with tiles and colorful buildings indicators to how it was done centuries ago. 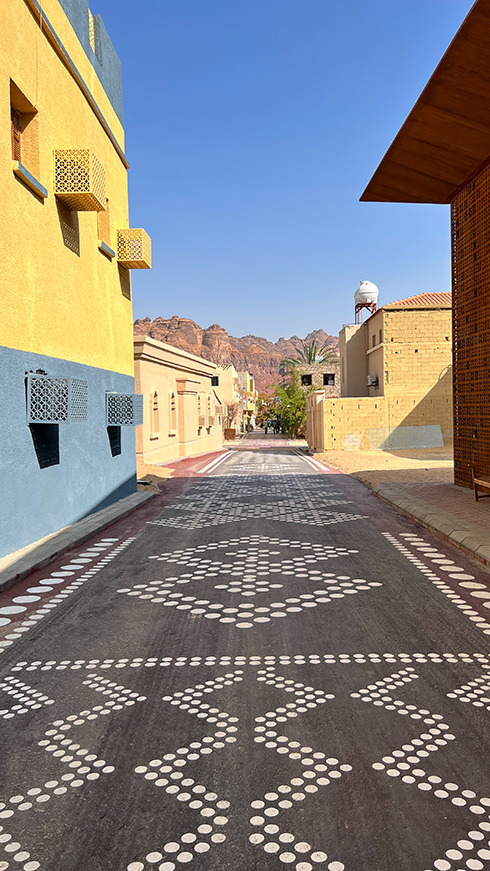 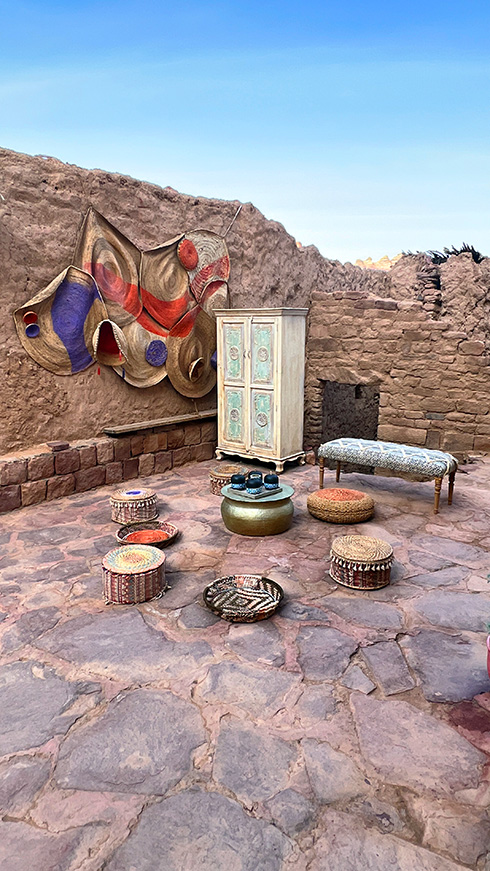 After lunch at Tetra Pizza in the center of Al Ula town, we headed to walk around the Dadan trail laden with palm trees and centuries-old homes that are now partly destroyed. It gives a perspective of how locals used to live among the oasis with mud houses. 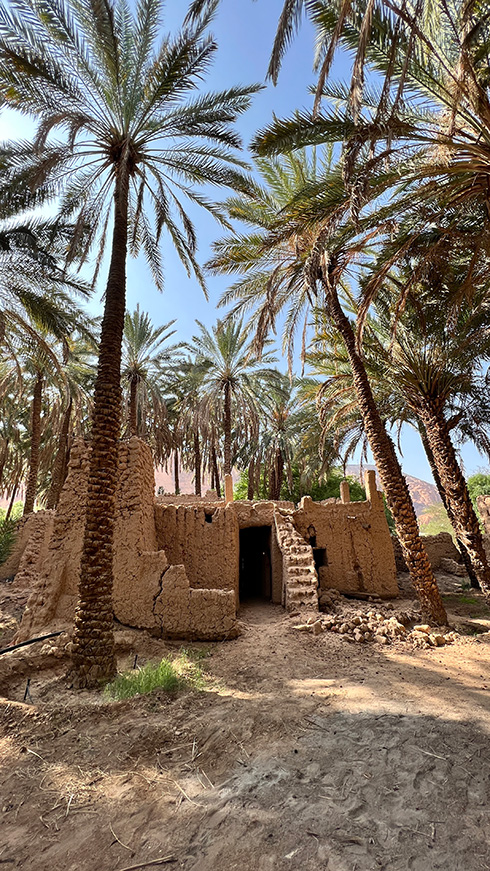 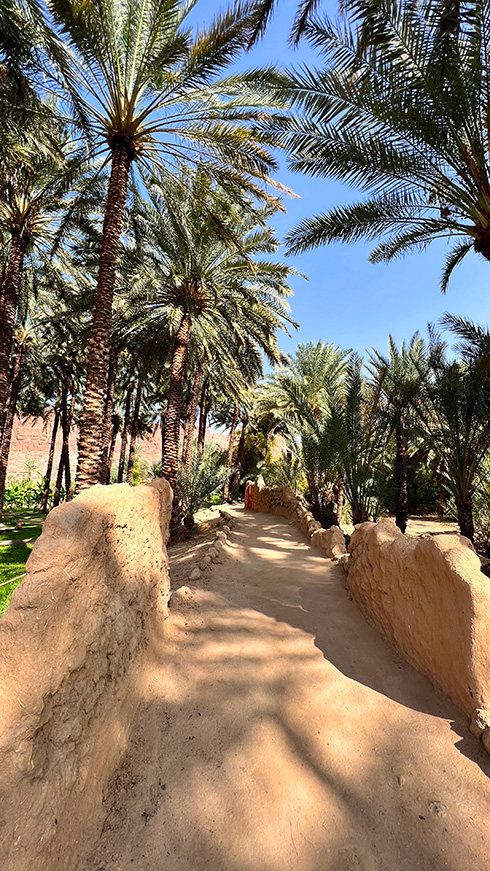 A Rawi or guide will lead through Al Ula Old Town, where pilgrims, travelers and permanent settlers congregated through the ages. Inhabited from before the 12th century up until the early 1980s. A maze of remnants of original stone and mudbrick buildings has about 900 houses, 500 shops and 5 town squares. The tour ends with a short climb up to the Al Ula Castle dating back to the 10th century, from where spectacular aerial views of the old town can be seen. 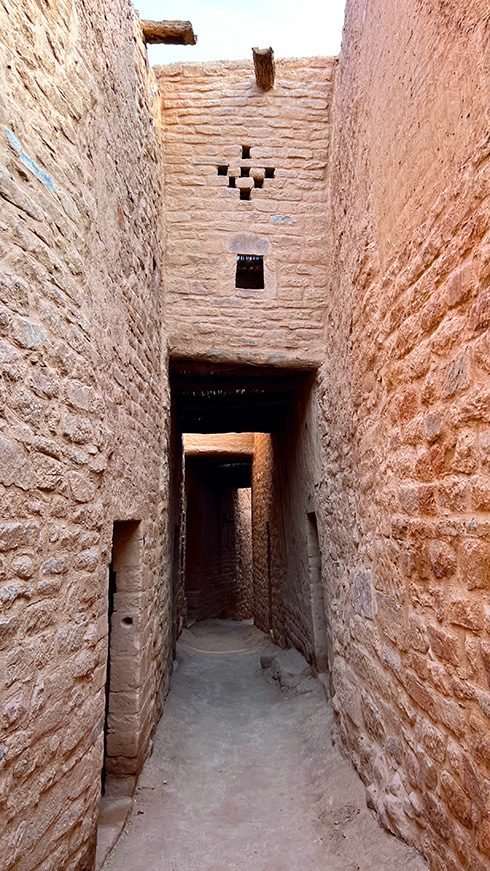 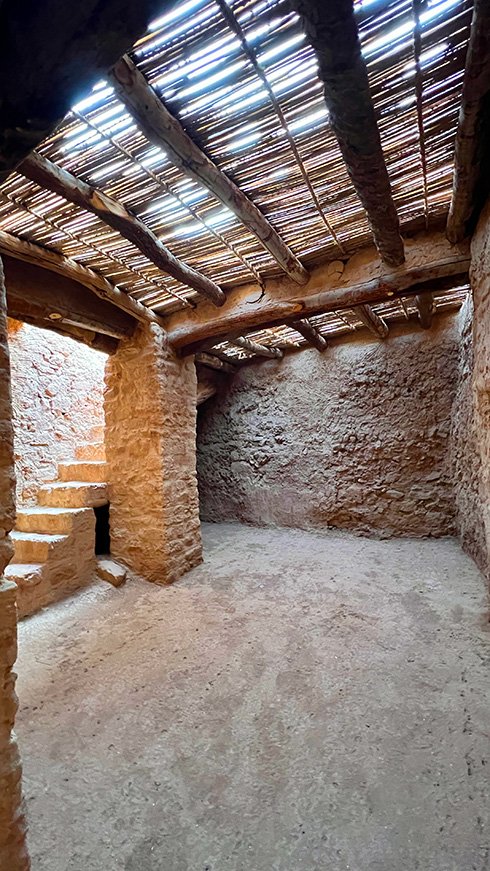 [A room in the house inside Old Town Al Ula] 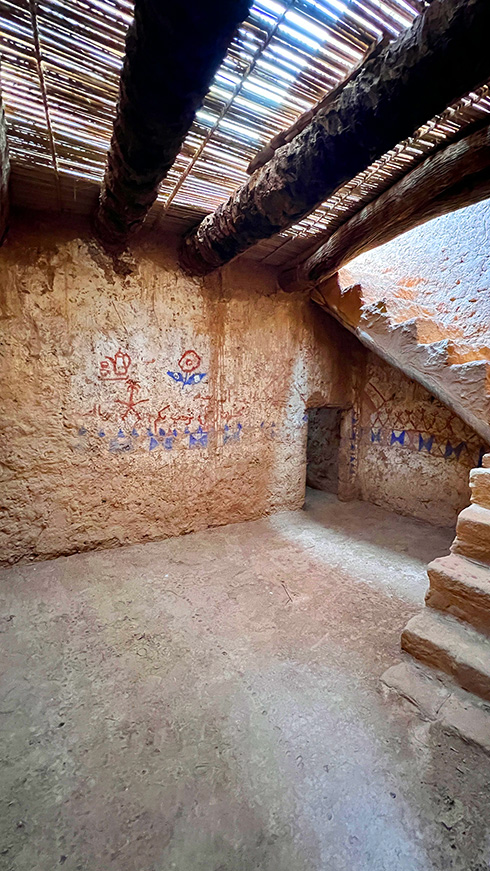 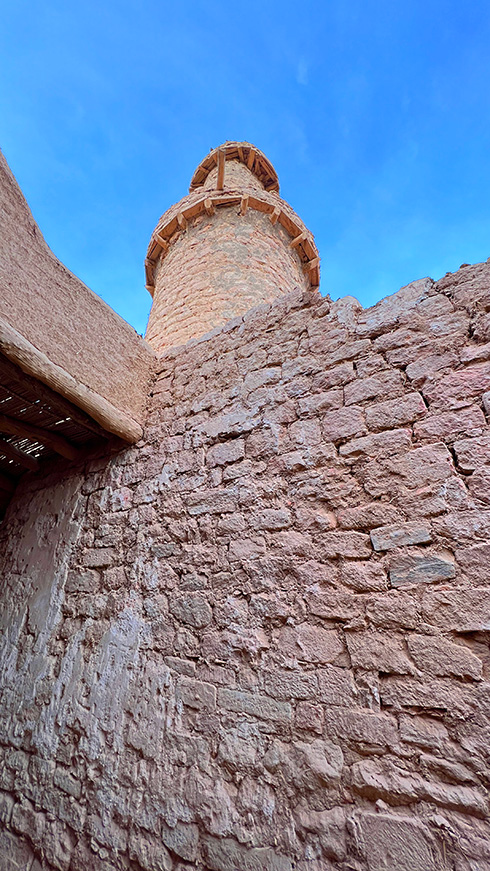 [Minaret of the mosque inside Old Town Al Ula] 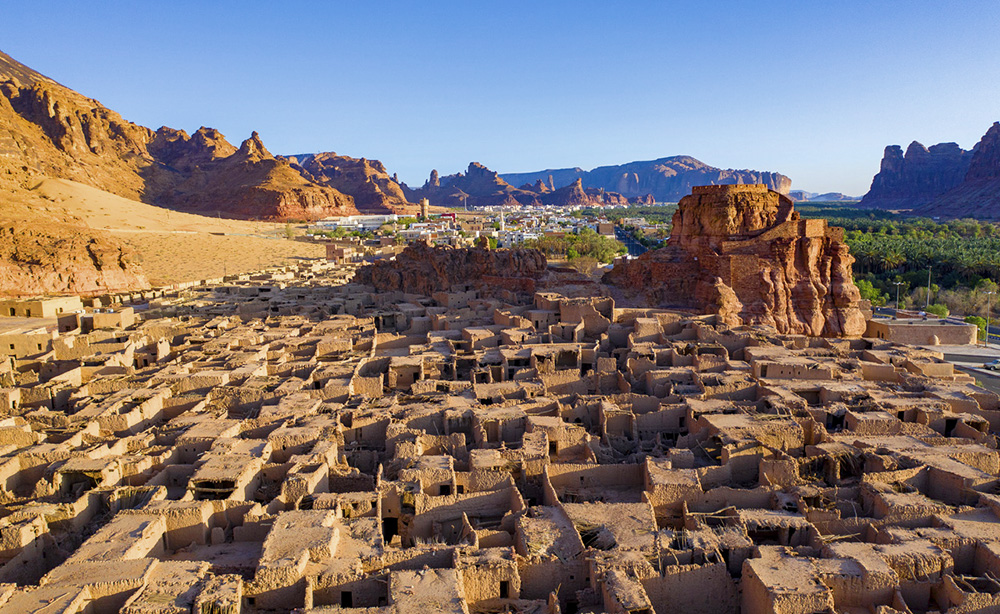 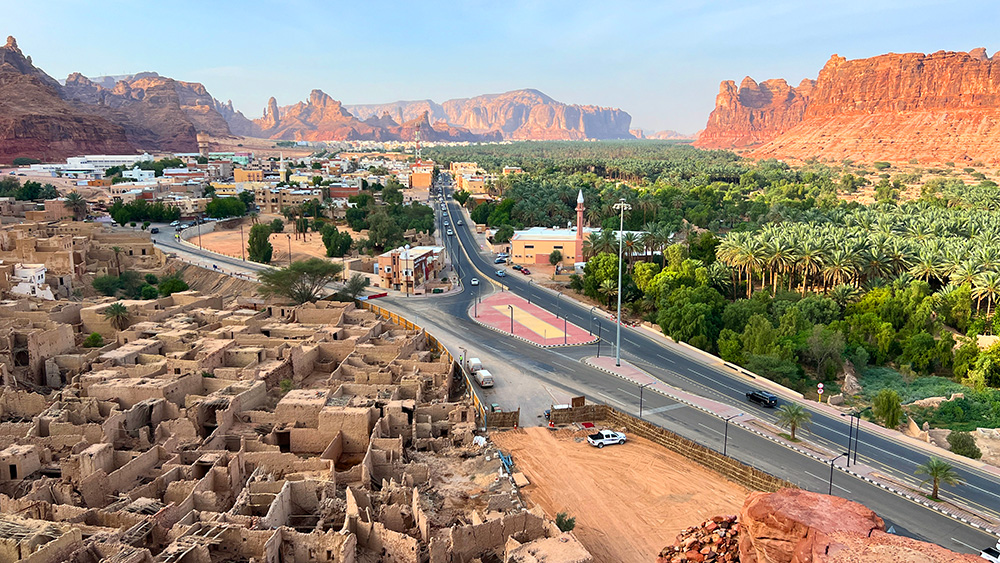 There are numerous cafes and souvenir shops along the old town center, making it a great place to have refreshments and stock up on some crazy souvenirs! 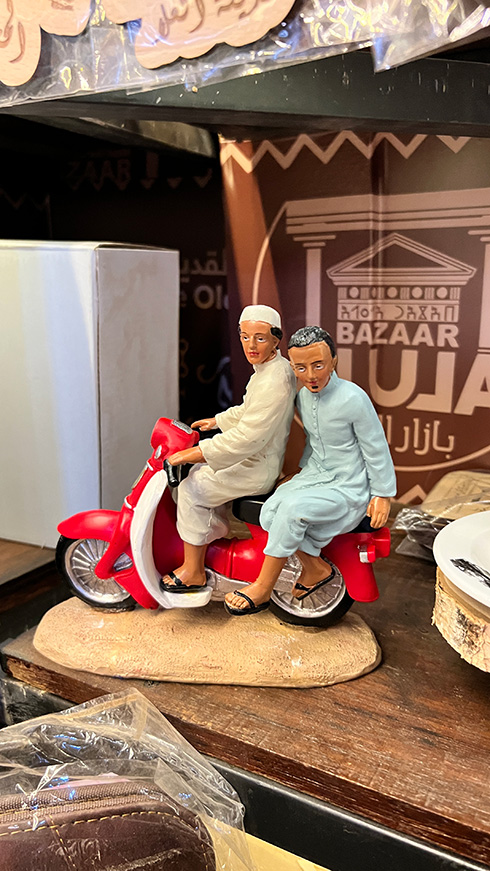 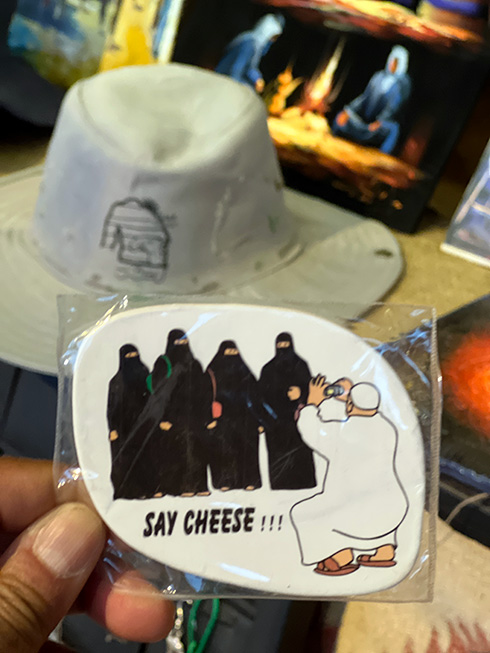