The plan for today was to drive 4-5 hours from Medina to Al Ula, so after breakfast at our hotel in Medina, we headed out driving up north along the beautiful roads of Saudi Arabia. Having started early in the morning, we reached the small town of Al Ula around 1pm.

Hotels in Al Ula can be expensive, but we got a great deal at Hotel Sweet Inn, just south of the old town. After checking in to the hotel, we stopped by for lunch at Circolo Restaurant in Old Town.

Al Ula was a vital crossroad for thousands of years along the famous incense-trading routes from southern Arabia to Egypt and beyond. The fertile oases offered a much-needed respite for weary travelers, becoming a popular place to rest, commune and recharge.

Al Ula was also capital of the ancient kingdoms of Dadan and Lihyan, which controlled the caravan trade. Hegra, a UNESCO World Heritage Site, was the principal southern city of the Nabataean kingdom, famed for its spectacular monumental tombs. Today, Old Town Al Ula is an abandoned labyrinth of streets tightly packed to create a defensive wall, and seemingly built over an ancient settlement.

From dramatic rock formations and sand dunes to archaeological ruins that trace the lives of the ancient cultures who built cities here can be explored.

After checking in the hotel, we headed straight to the Elephant Rock, that opens at 4pm. And right across from the site of Elephant Rock, is this amazing rock-opening in the shape of a bowling pin. Drive through the open desert to the nearest spot and easy-hike for 10 minutes to reach this structure. 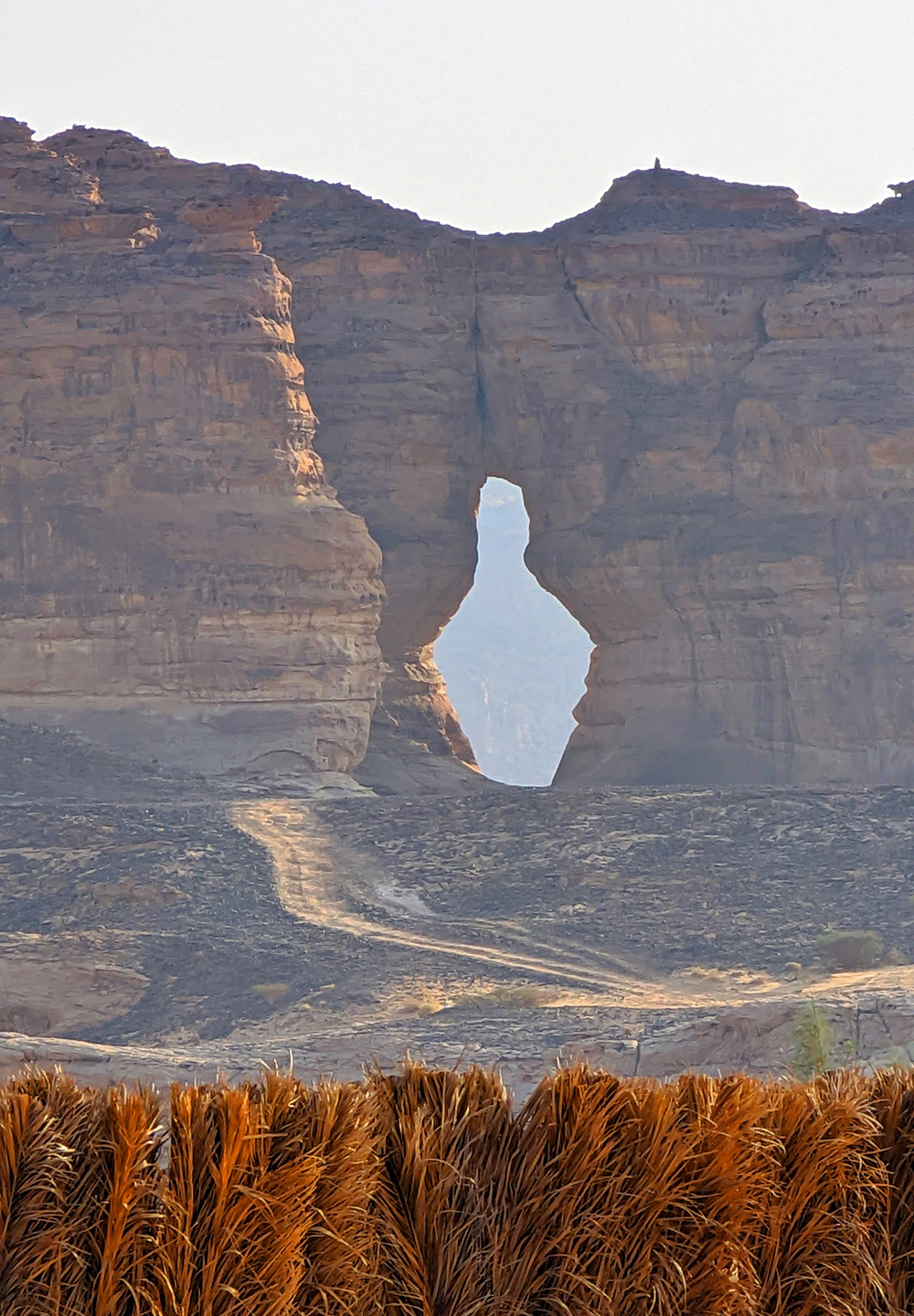 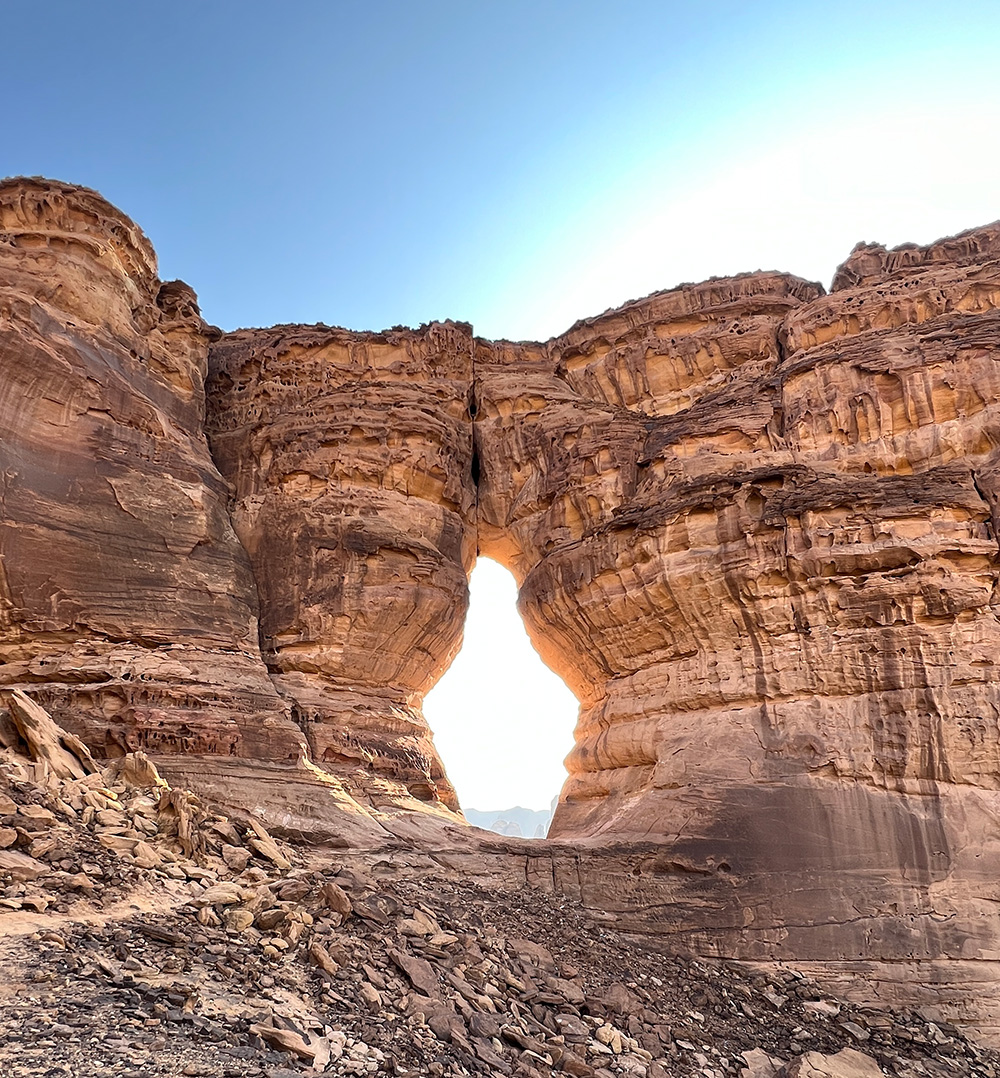 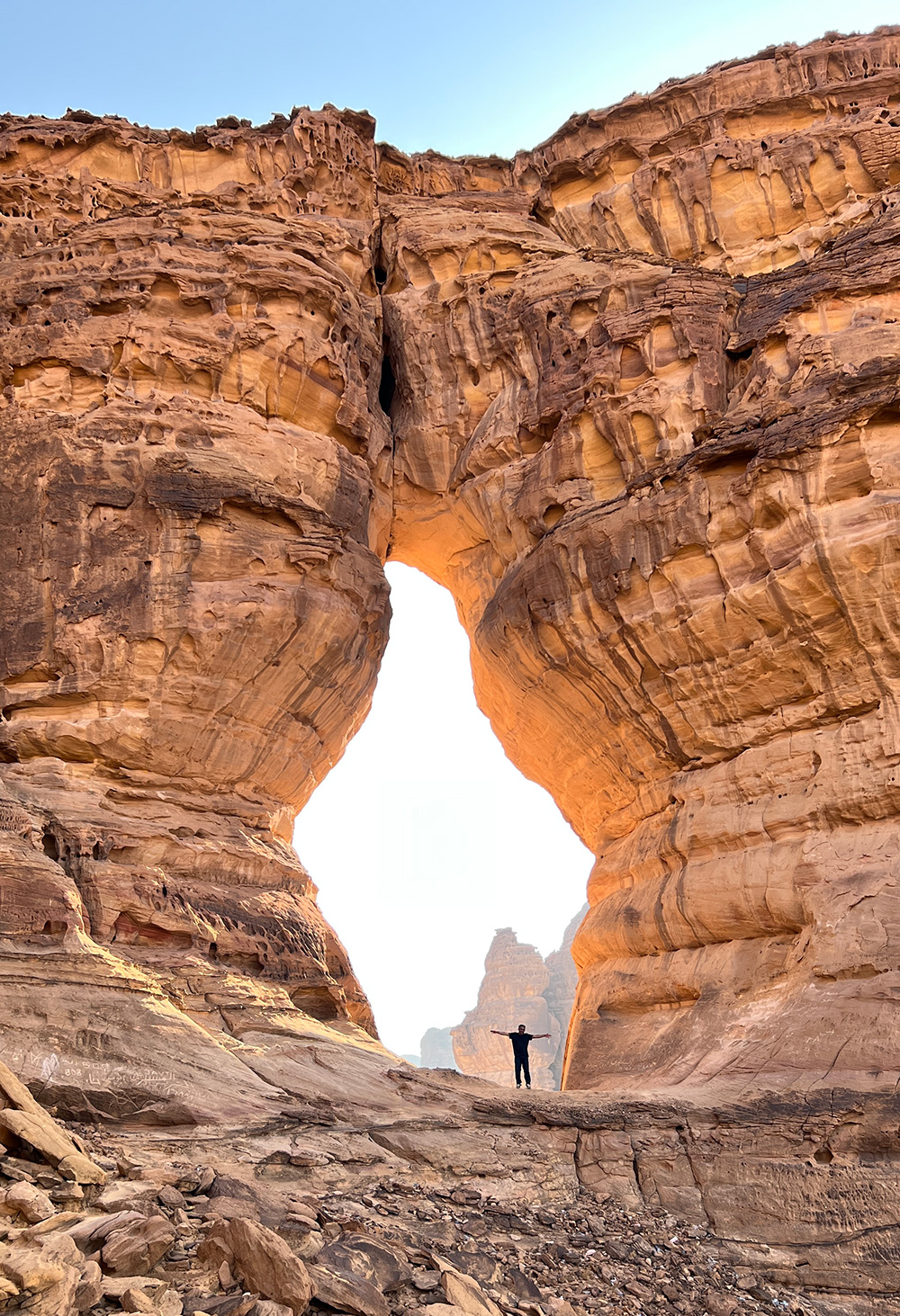 Known locally as Jabal Alfil, the Elephant Rock is a natural monolithic red sandstone ‘beast’ shaped by natural forces for millions of years. The “trunk” and “body” of the Elephant Rock gives it a unique resemblance to, well, an elephant; hence the name!

The beauty of the unrefined structure is enhanced by a landscape of golden sands, studded with rocky outcrops, many of which are equally impressive in size and have interesting shapes and figures.

There are pit-lounges, coffee bar and toilets at the site. We arrived at the opening time of 4pm, and stayed until after sunset when the lights turn on to give a spectacular view of the majestic structure. 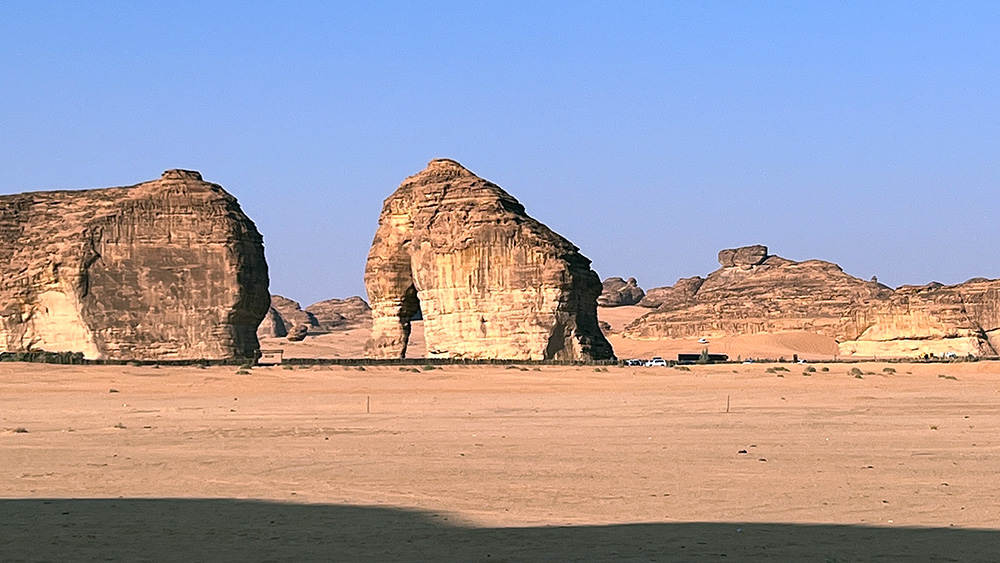 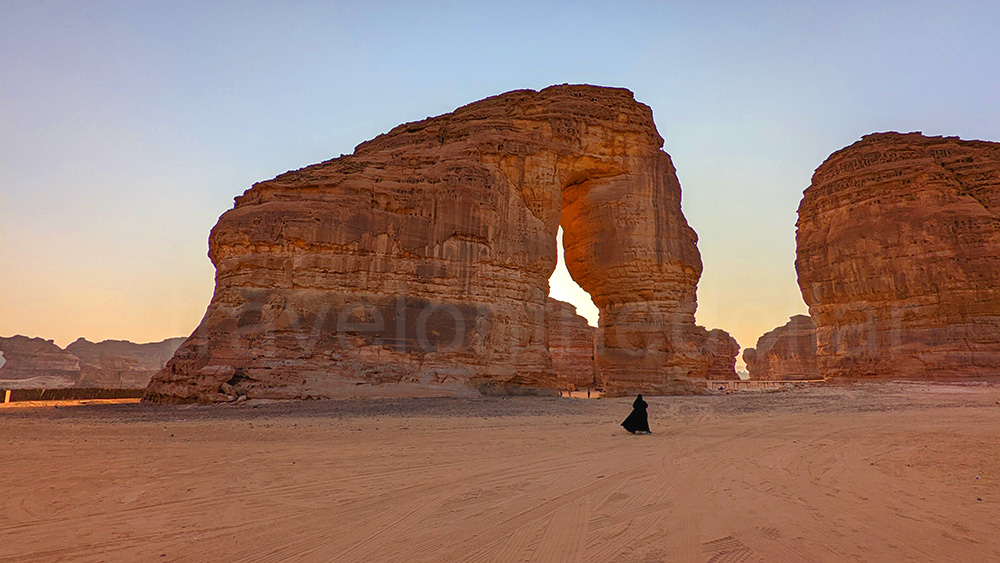 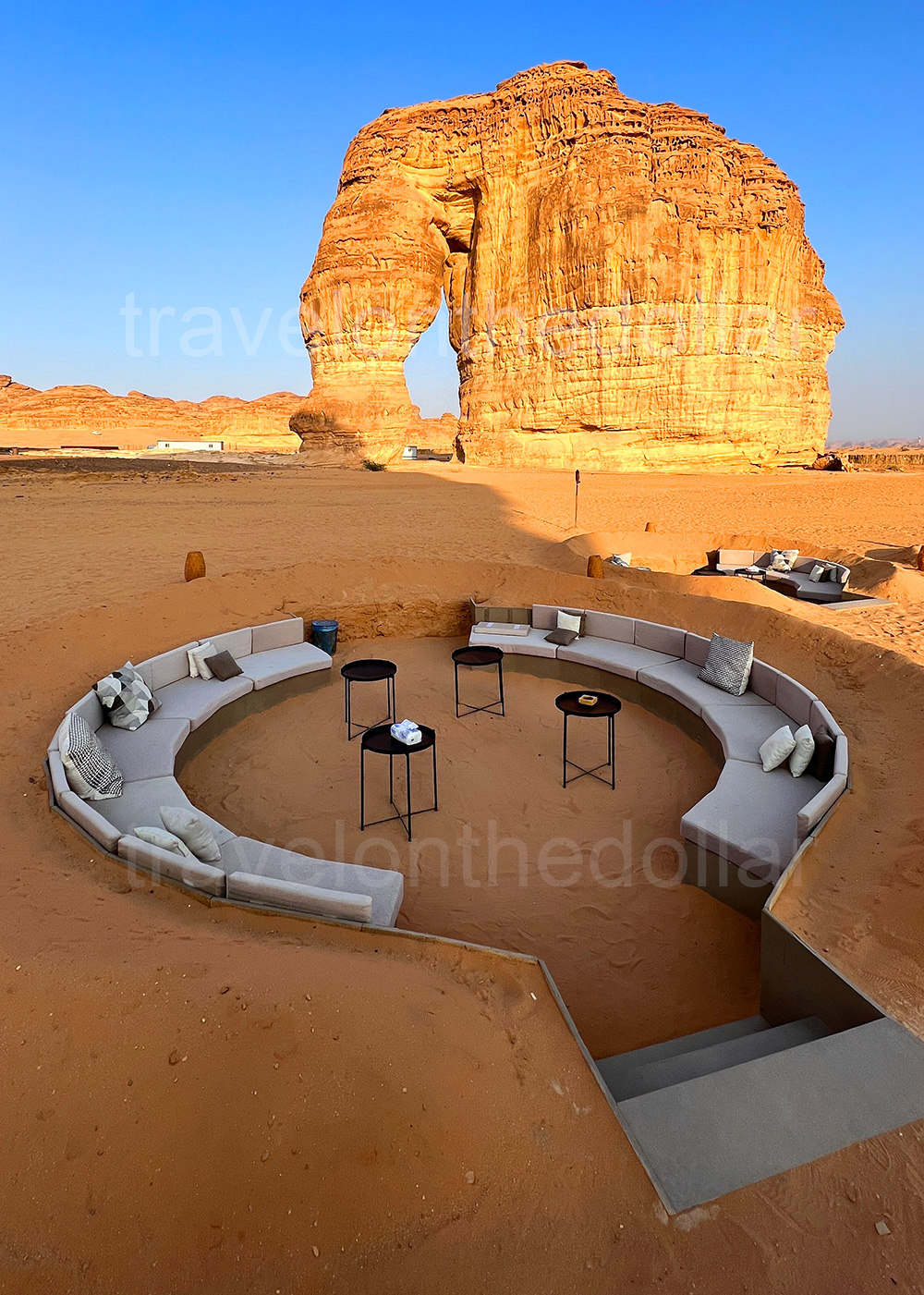 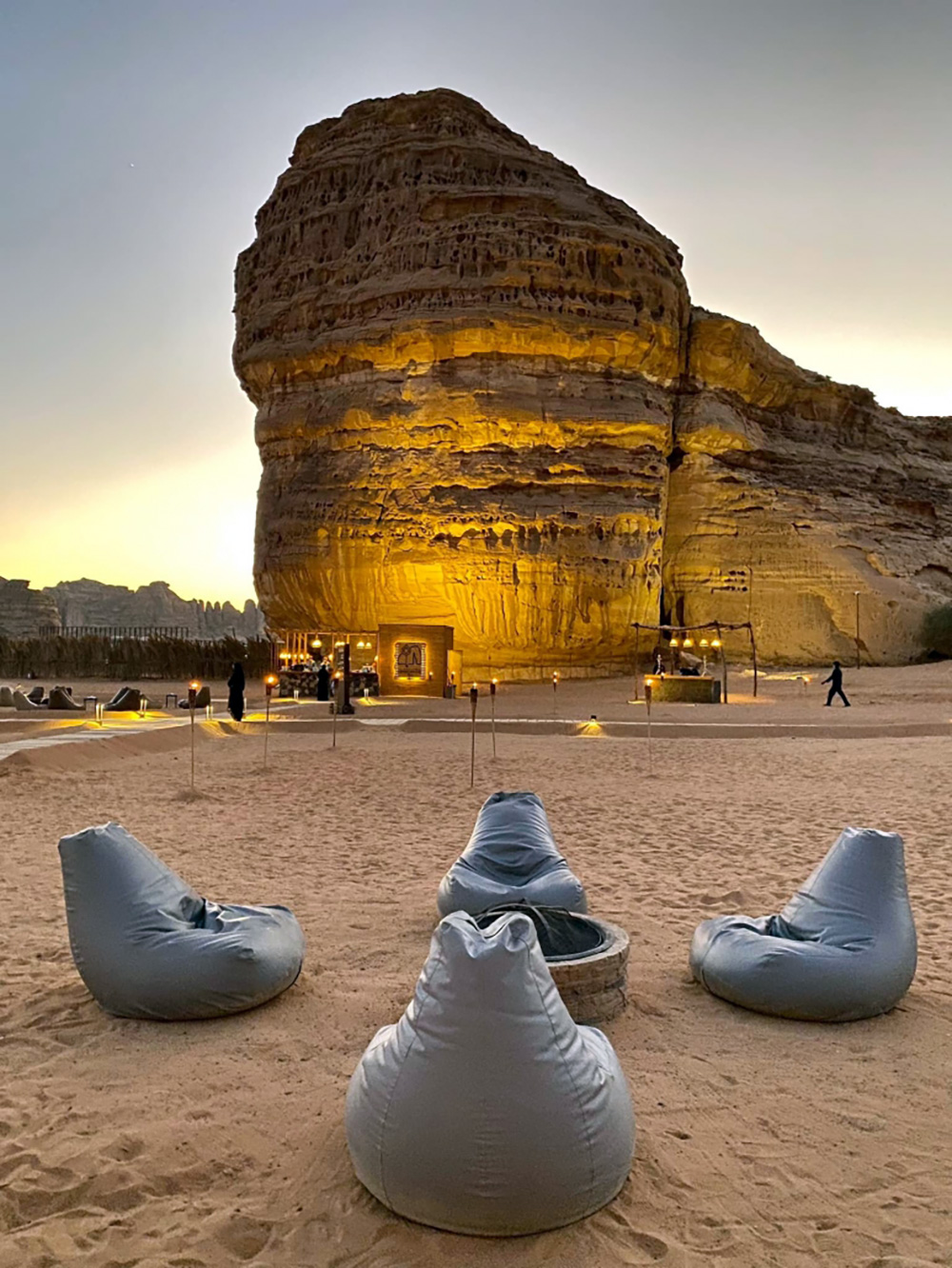 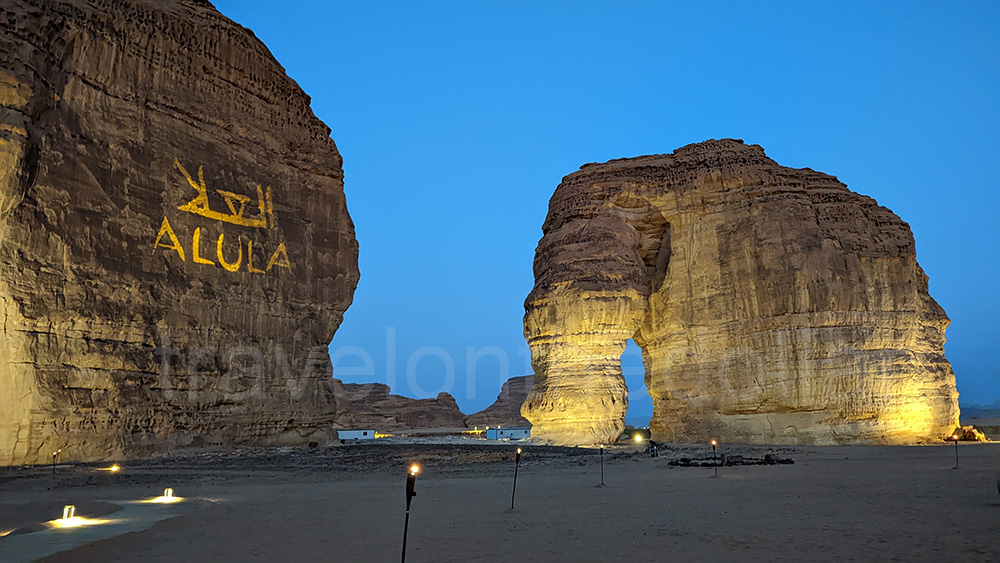 Dinner was Msayya Indian restaurant that offered delicious (both meat and vegetarian options) food.
Our Experience Al Ula tours were booked in advance for tomorrow.