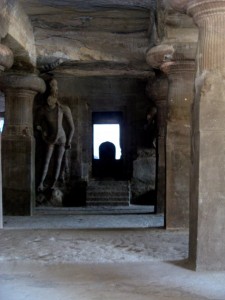 Elephanta Caves are caves located on Elephanta Island in the Arabian Sea near Mumbai, India that contain Shaivistic high reliefs in stone of Hindu deities important to worshipers of Shiva. The sculptures were created beginning in the late Gupta Empire, or some time after, and at later dates. Elephanta Island was designated a UNESCO World Heritage Site in 1987 to preserve the artwork.