We all know that power sockets vary from country to country, or at least region, but voltages are mainly of two values – 110V or 220V. Of course, this may differ a bit to about +/-10V. So if you don’t have a device that works on dual-voltages, you may want to consider getting a travel adapter. For example, your 110V electric toothbrush will not work with, say, India’s 230V power unless you have an adapter plug AND a converter.

Unfortunately, there are no international standards on power supply (voltage and frequency) or the types of outlets. Use the map and chart below to locate power information by country.

Note: The letter used to denote the adapter plug type may not correspond with a plug manufacturer’s description or labeling. 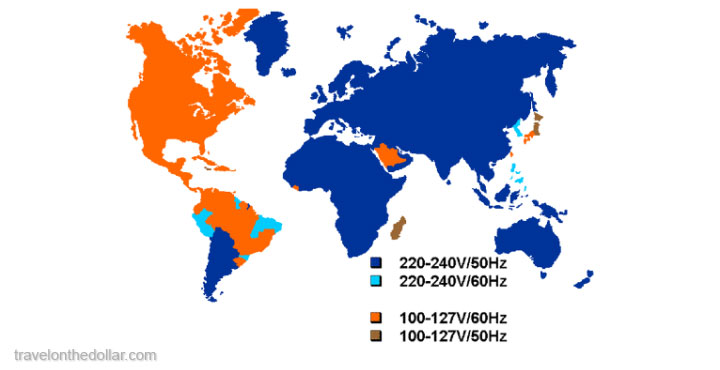 * Brazil has no standard voltage. Most states use 127V electricity (Acre, Amapá, Amazonas, Espírito Santo, Mato Grosso do Sul, Maranhão, Pará, Paraná, Rondônia, Roraima, Sergipe and Minas Gerais). Other (mainly northeastern) states are on 220V (Alagoas, Brasília, Ceará, Mato Grosso, Goiás, Paraíba, Rio Grande do Norte, Santa Catarina and Tocantins). Although in most parts of the states of Bahia, São Paulo, Rio de Janeiro and Rio Grande do Sul 127V is used, the cities of Santos, Jequié, Jundiaí, São Bernardo do Campo, Novo Friburgo, Bagé, Caxias do Sul and Pelotas run on 220V. The states of Pernambuco and Piauí use 220V, except for the cities of Paulista and Teresina (127V).

*** Saudi Arabia uses 110V in many parts of the country, such as the Dammam and al-Khobar area (situated in the eastern province of Ash Sharqiyah). 220V is commonly used as well, especially in hotels.

Disclaimer: The information provided here is just a guide and should not be relied upon as 100% accurate. Many countries can and do change their name, power supply and outlet design. If you have experienced a different fact during your travels, please let us know and we will make sure to update / correct it.