After breakfast at the hotel in Asuncion, we planned on visiting the nearby small towns to see the churches and get a sense of rural Paraguay. But first, we headed to the Asuncion airport to pick up our rental car.

Having a rental car makes it really easy to drive around the country. While there are public transport options available to go from one town to the other, it can take hours considering the buses stop every other mile to pick-up or drop-off passengers. The bus routes from point A to B may not be direct and with stopovers in main towns, your travel time may be longer that you anticipated!

After picking up the rental car from ASU airport, we planned to visit these towns: 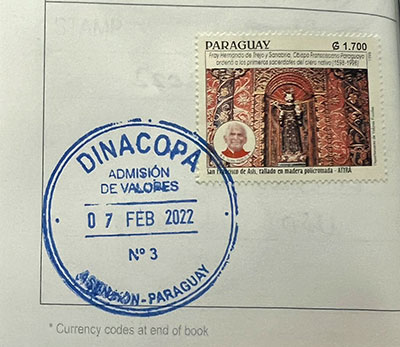 But before heading out, we stopped over at the post office in Asuncion for a stamp in our Postal Stamp Travelogue book as a collection.

The highlights of each of these towns are their churches or cathedrals. With the exception of the castle in Areguá.

Map of the drive 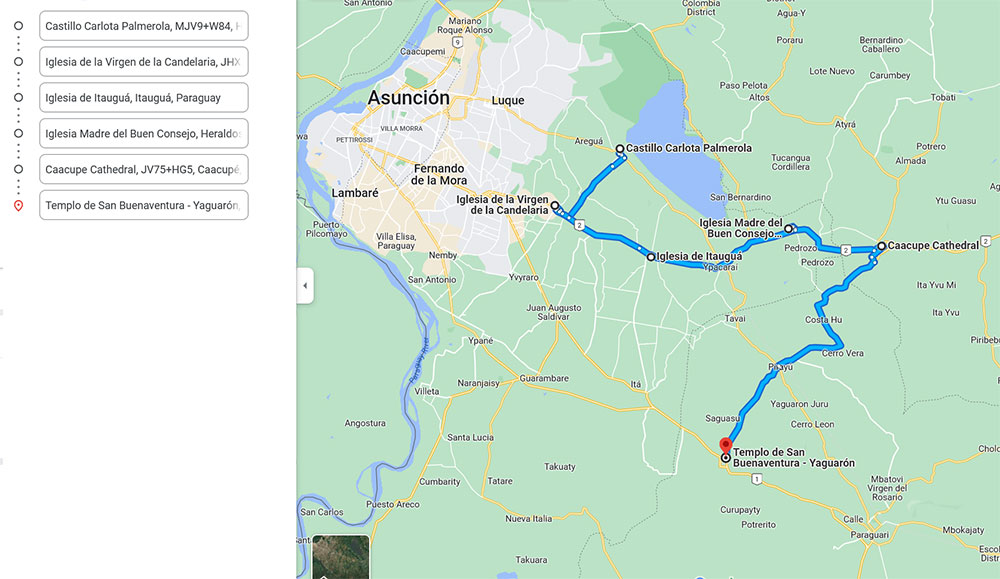 Located about 35 km outside of Asuncion, this small town is very close to the shores of Lake Ypacarai.

Built in 1897, this mansion was the brainchild of the unconventional Palmerola Ayala family and incorporated an odd mix of medieval styles and looks dramatically out of place in its tropical surroundings.

This eccentricity was intentional. After building their unusual estate, the Palmerola Ayala family quickly opened the castle for public balls and parties, which helped cement their social status and reputation. In 1956, the family donated the estate to the Catholic Church and the complex was transformed into a convent. Now visitors can roam the well-manicured grounds and wander rooms filled with early 19th-century furniture, art, and oddities, including a grotesque display of taxidermized pets. 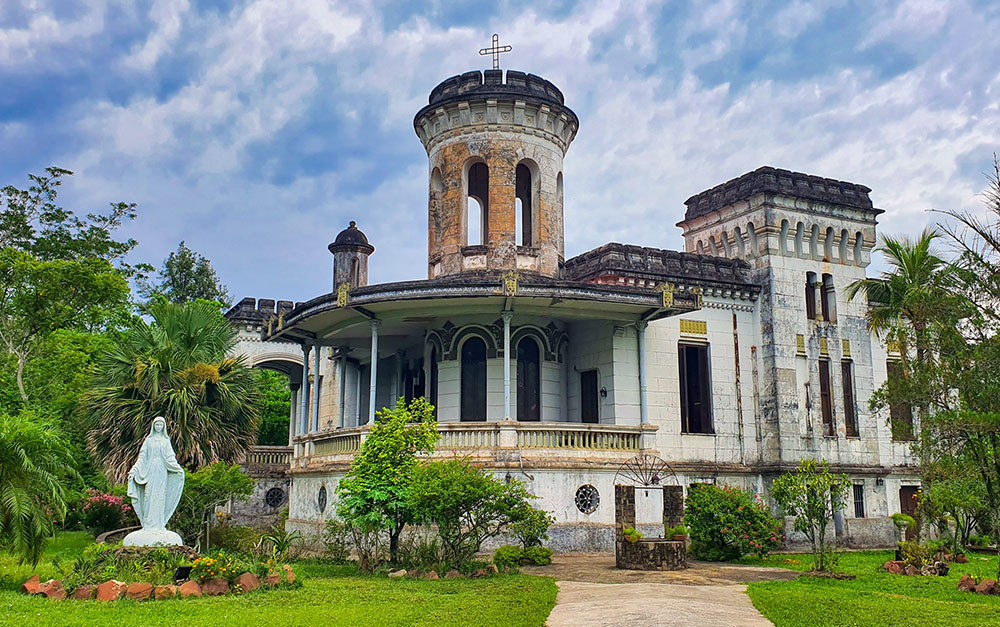 About 21 kms from the Carlota Palmerola mansion is the church of Virgin of Candelaria in the town of Capiatá.

There is no precise data on its construction, it is known that Capiatá was a lieutenant belonging to the Cathedral of Asunción, in 1640 and a priest was commissioned to build this Church. But in 1688 there are records where Bishop Cárdenas built a chapel and rebuilt it.

The church has an altarpiece that was carved in wood with various sacred figures, using polychrome to give it color. It has two side figures, a confessional and a pulpit, all made of wood. 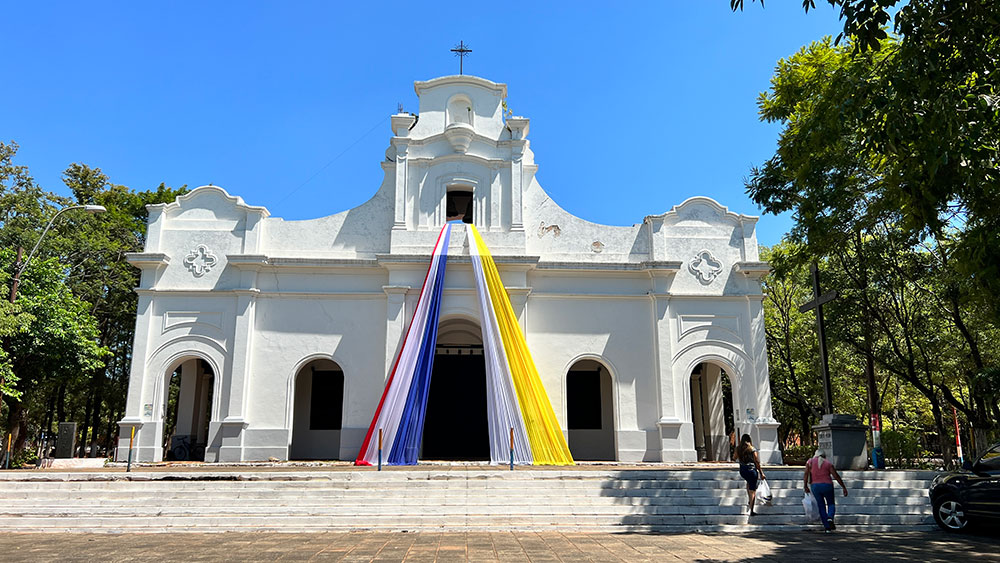 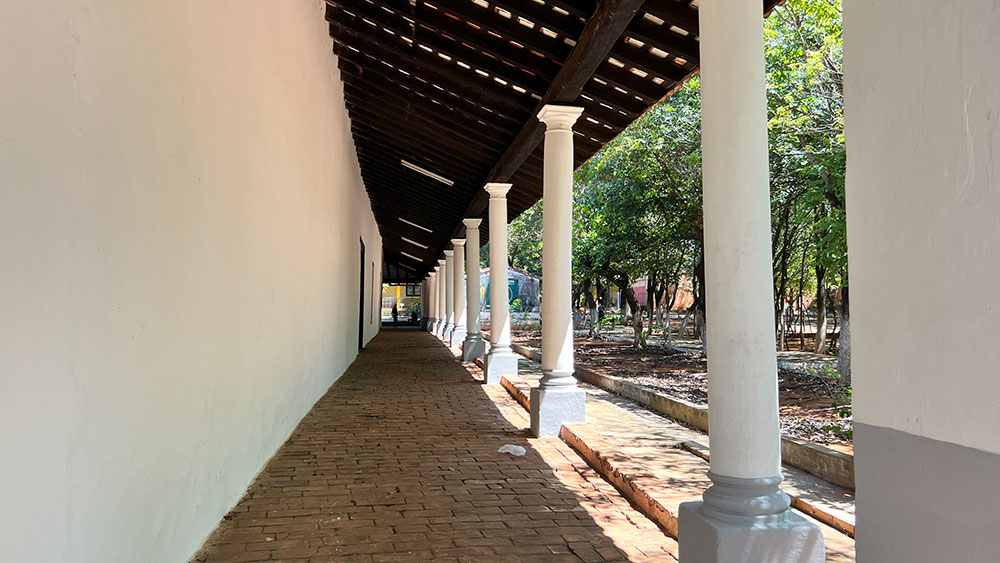 About 11 kms from Capiatá is this small town of Itauguá.

Construction began in 1886, this church was inaugurated in 1908, and was renovated in 1962. In the square in front of the temple, stands the statue of the Unknown Soldier, with bronze plates that evoke the 220 Itagüeños immolated in the Chaco War. 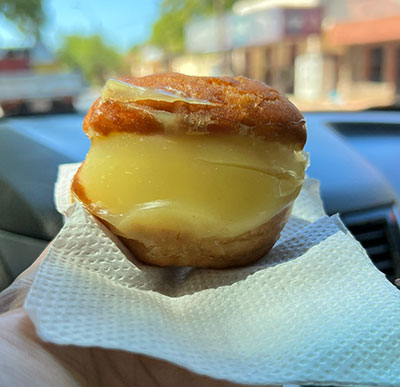 Just outside the church a man was selling these home-made crema pandelaria that costs 2,000 PYG each. So we bought about 4 of them for some delicious sweetness! 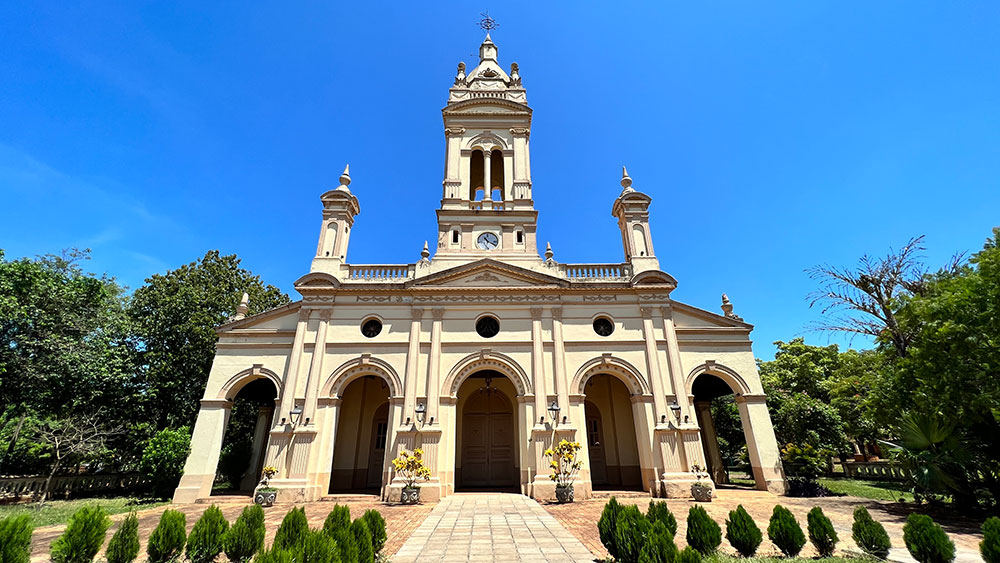 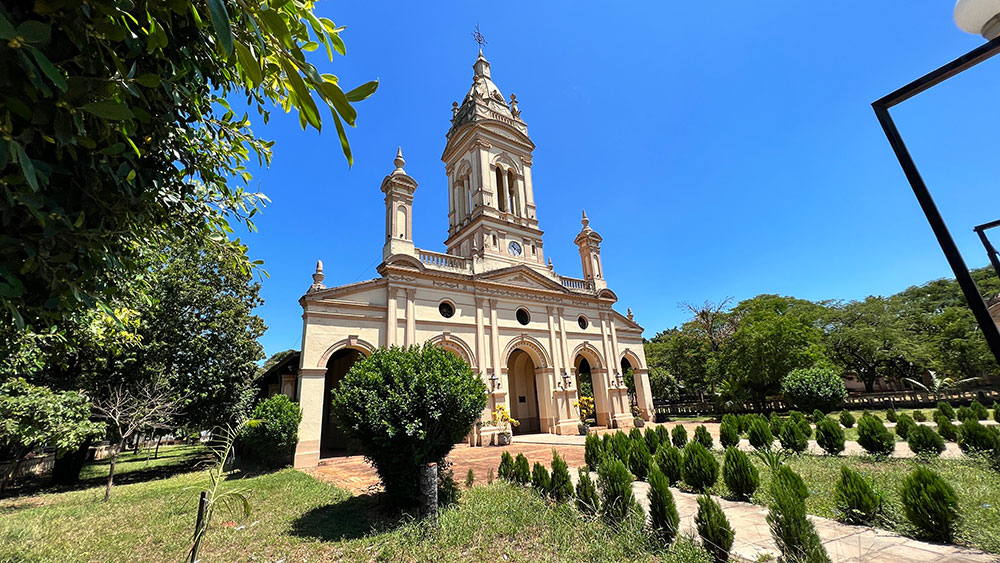 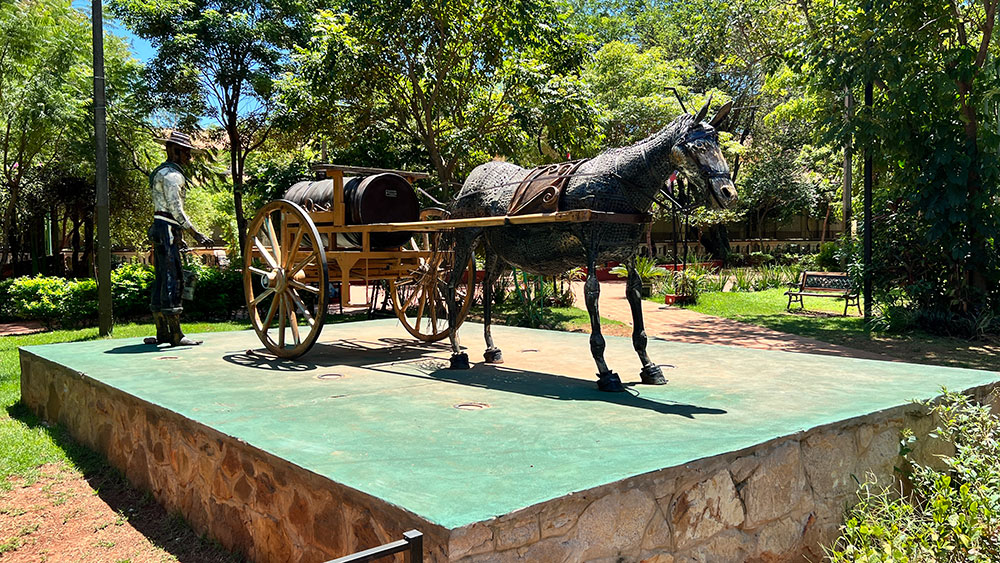 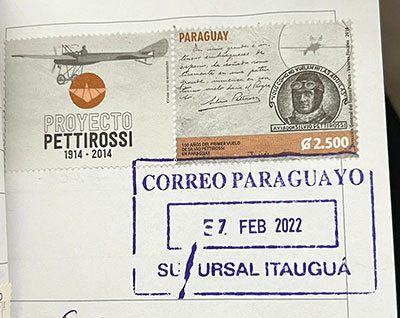 But before heading out, we stopped over at the post office in Itagua for a stamp in our Postal Stamp Travelogue book as a collection.

Just a short drive from Itagua lies this spectacular church whose interiors are not to be missed.

Translated to Temple Mother of the Good Council of the Gospel Heralds, this church is erected as a unique architectural jewel in the country, whose construction was made entirely by Paraguayan hands. The pillars and ceiling have bronze and gold stars embedded and the main dome is made up of gothic arches, oversized stained glass windows and slanted pillars. 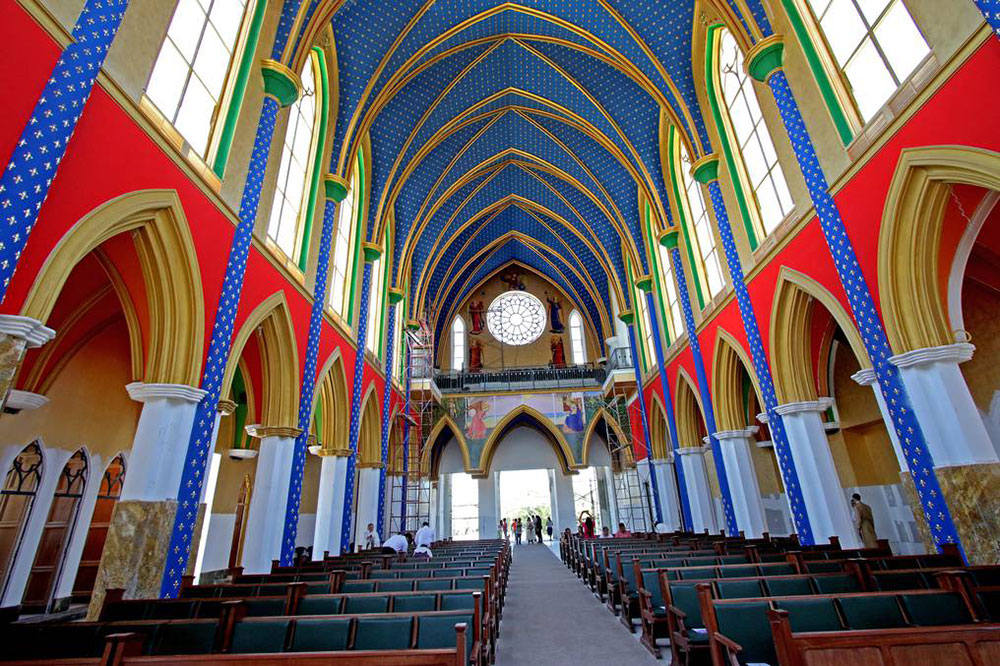 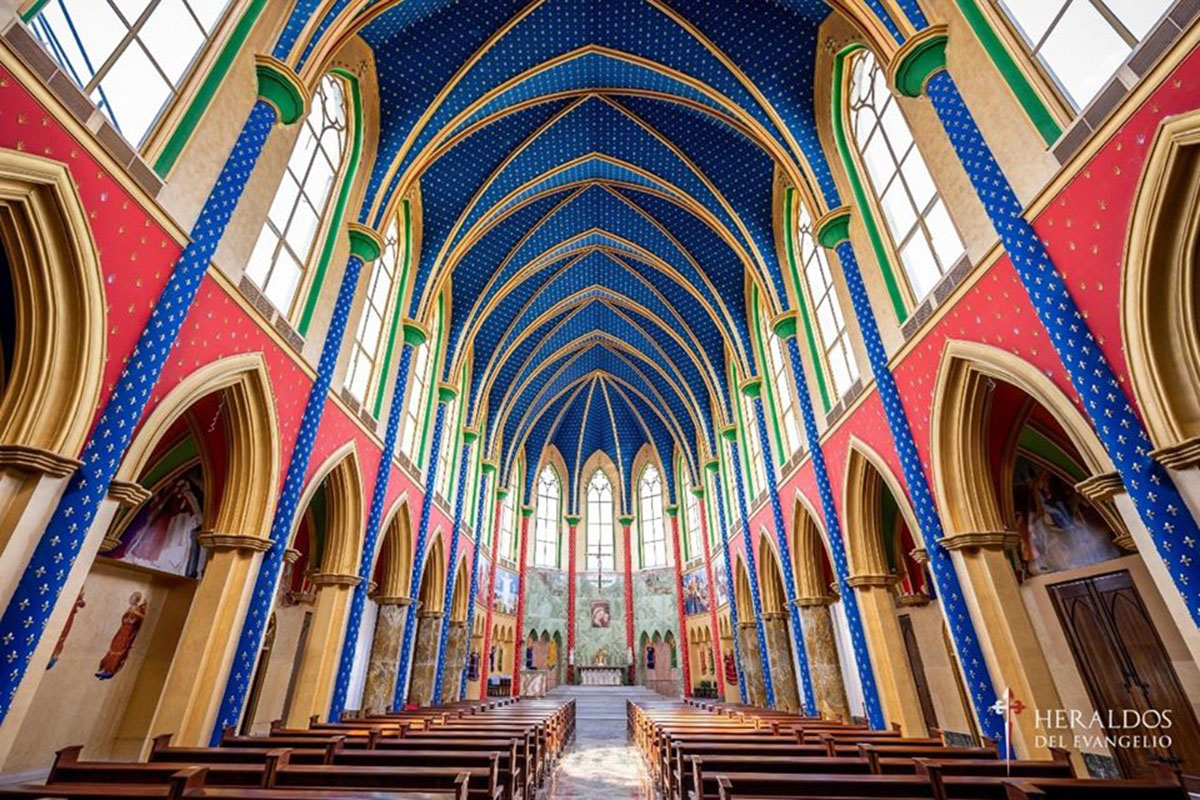 Next jewel in the crown of Caacupé is the massive Caacupé Cathedral. It is a spectacular work of art from outside but it did not awe us from inside. This is an enormous cathedral of this provincial town. The most special religious event that happens here is El Dia de la Virgen in the month of December where you will find many pilgrims from all parts of the country seeking blessings from the Virgin. 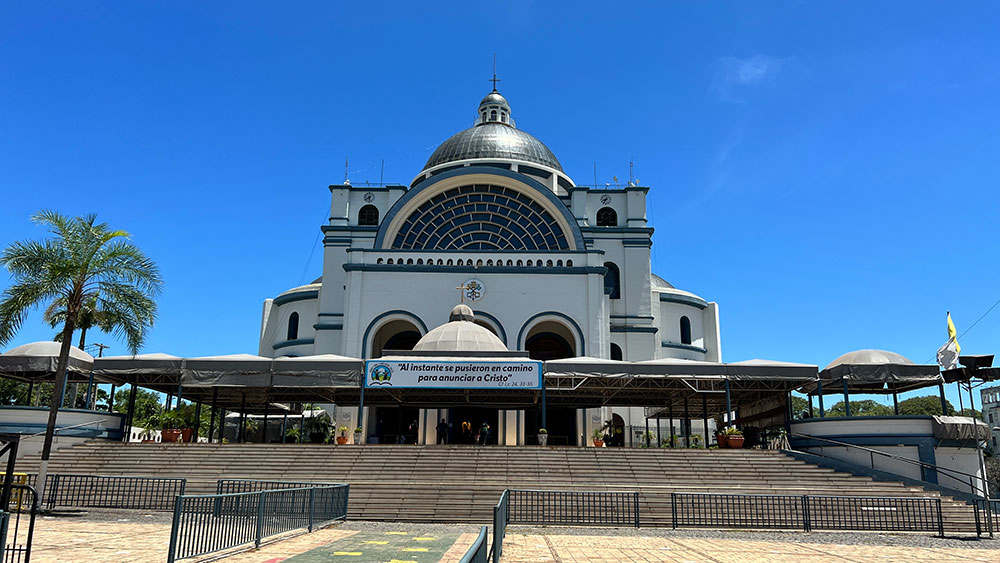 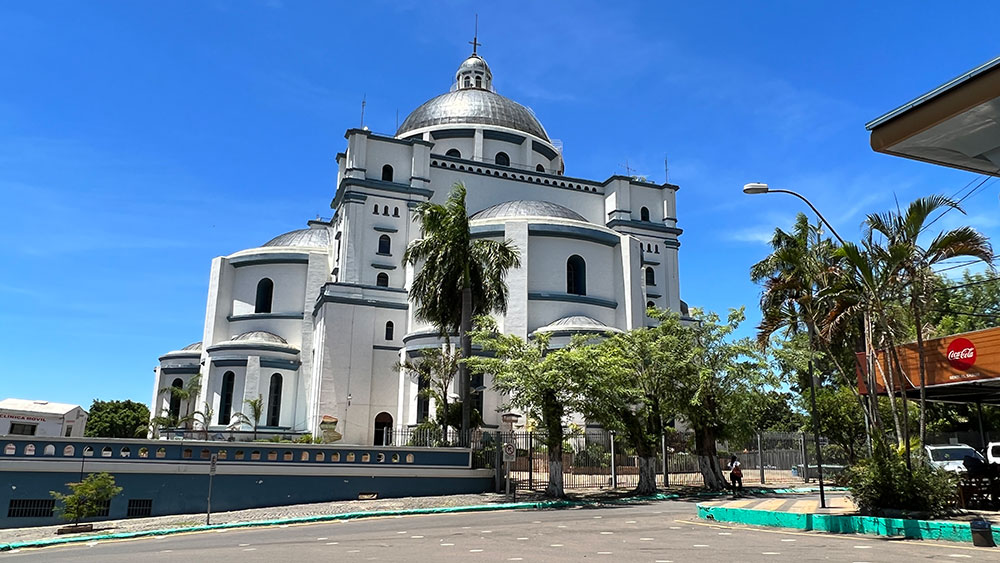 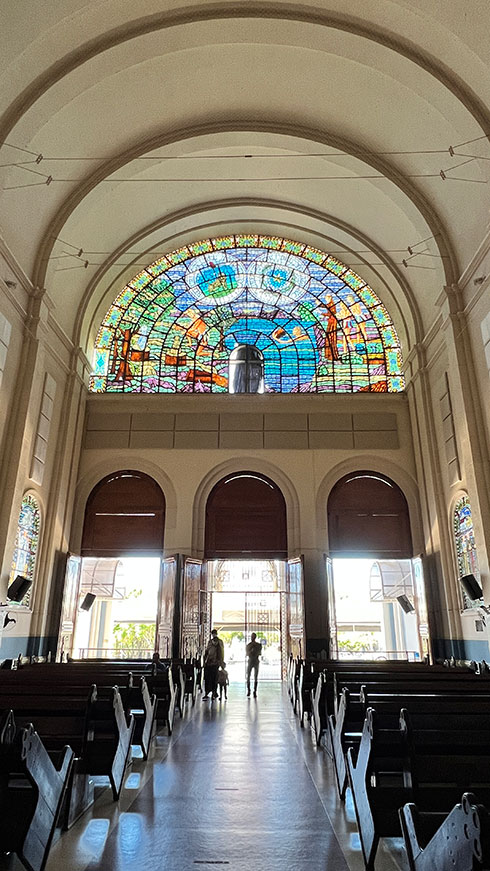 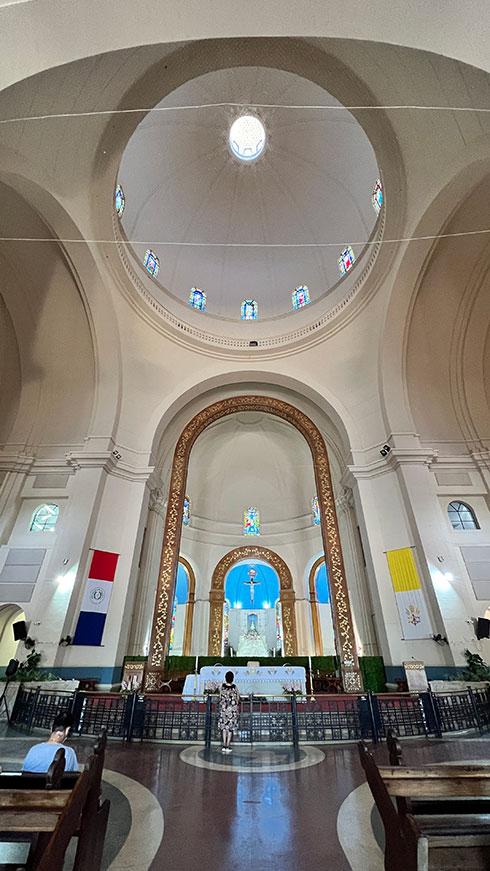 Last town on this tour was located about 31 kms from Caacupe in the town of Yaguarón.

This temple, named in honor of the Patron Saint of Yaguarón, is one of the legacies left by the Franciscans for their time in Paraguay during their time of conquest. Construction was completed in 1772, this temple is an austere construction without ornaments and with a bell tower separated from the main block on the outside.

But inside the temple one can marvel at the artistic work of its main altarpiece, its altars, pillars and ceiling. A monumental work that hides behind a face of simplicity because the temple has the main gabled structure and two quite long galleries on the sides whose ceilings are supported by numerous pillars, but it is inside where all the visitors are trapped by its quantity of details and sculptures carved in wood by the indigenous people, and colored with vegetal paints. 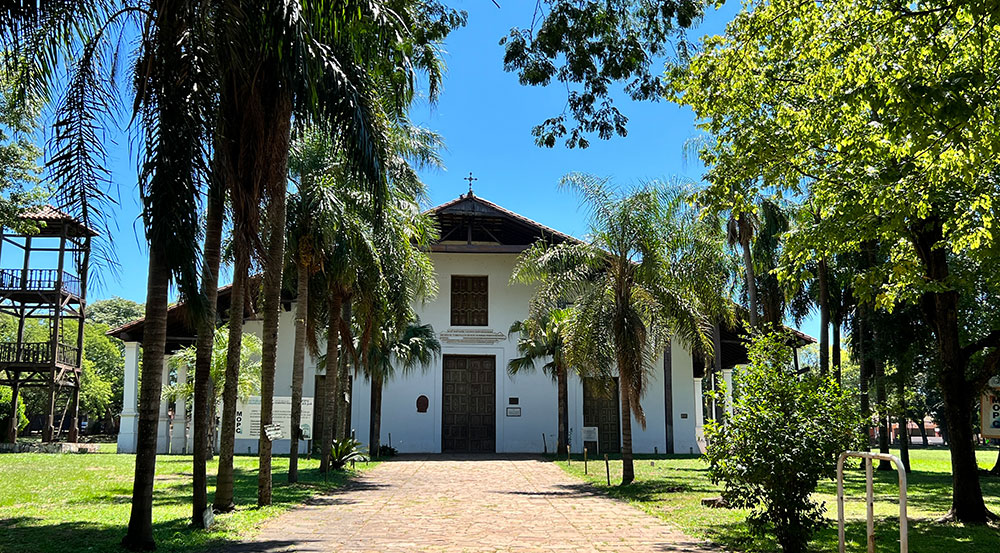 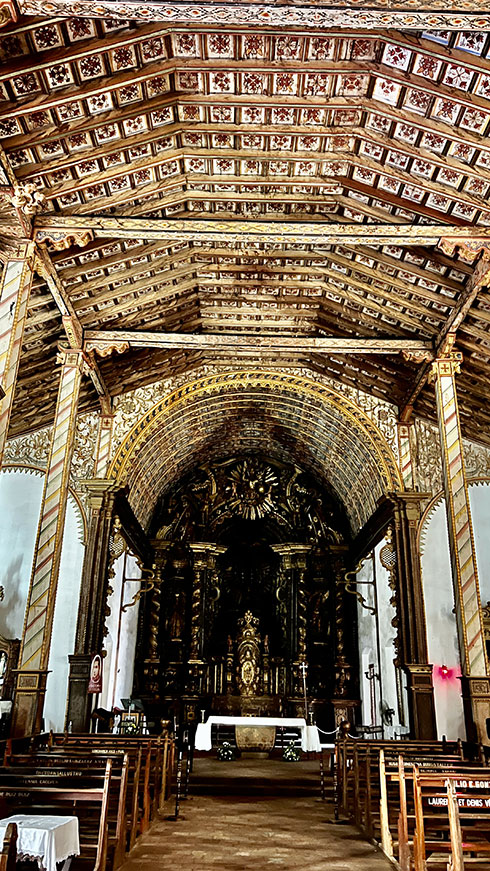 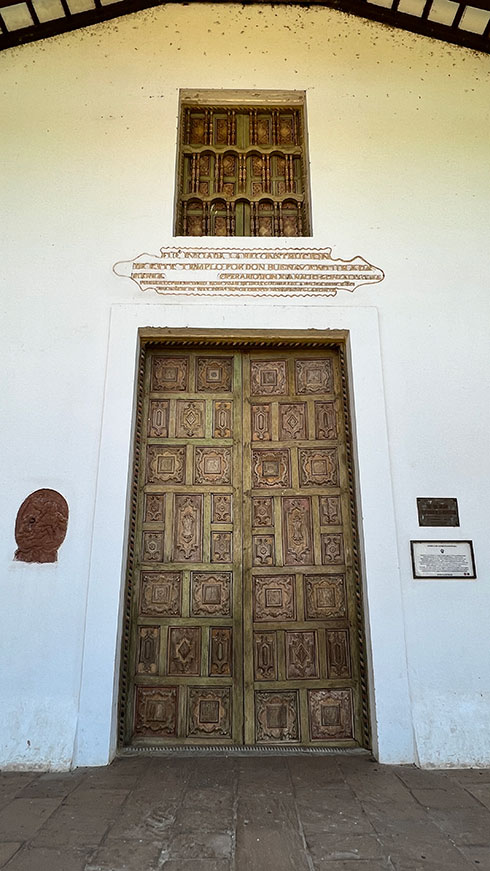 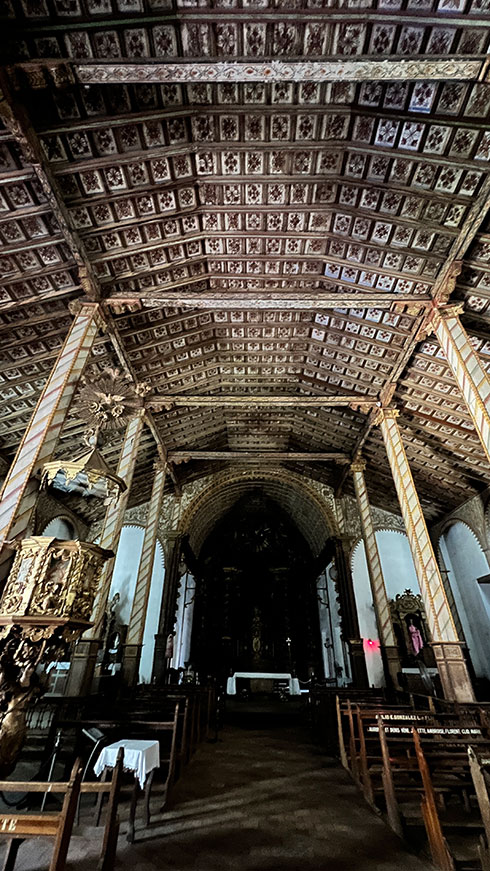 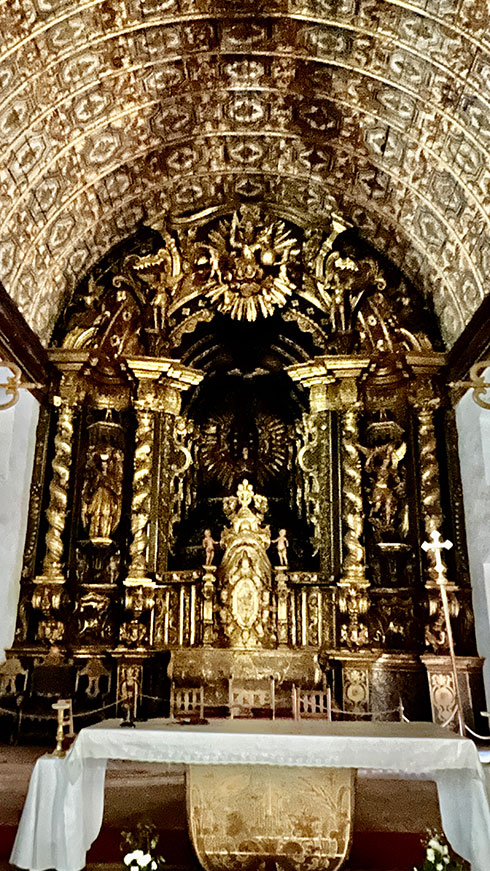 After spending almost the whole day driving through these towns, we headed back to Asuncion. We headed for dinner at one of the top-rated cafes in the city – El Cafe de Aca, before calling it a night. 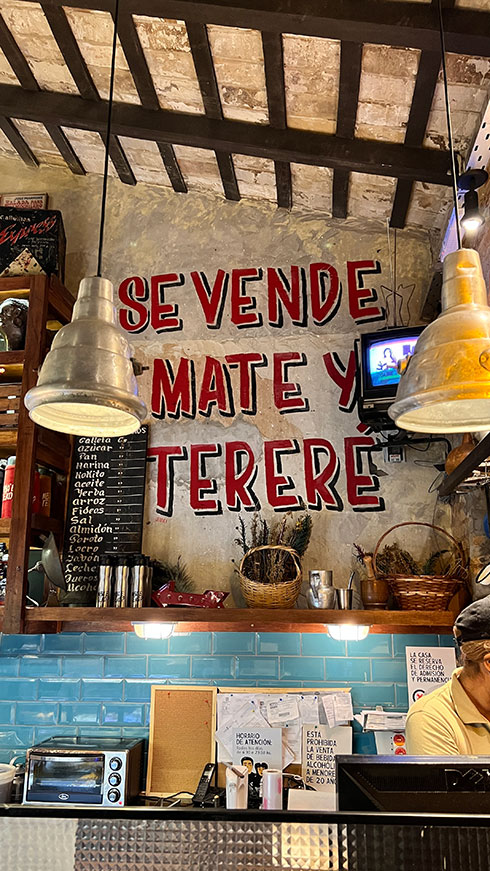 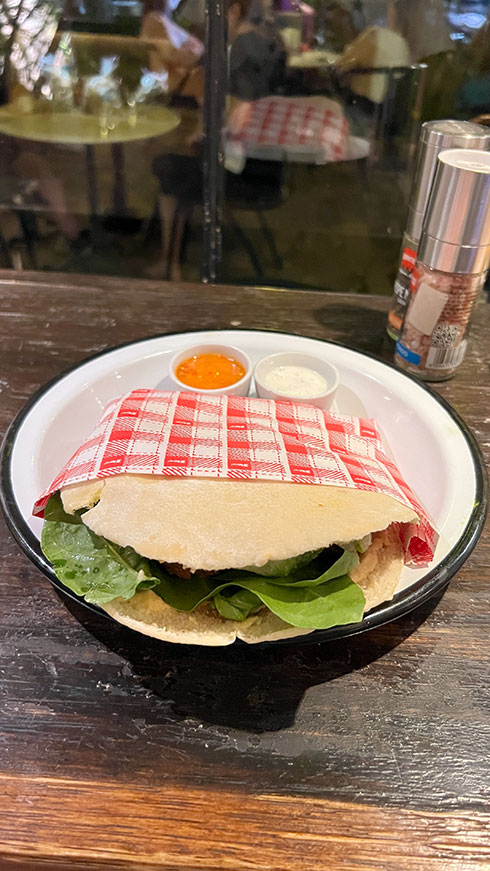 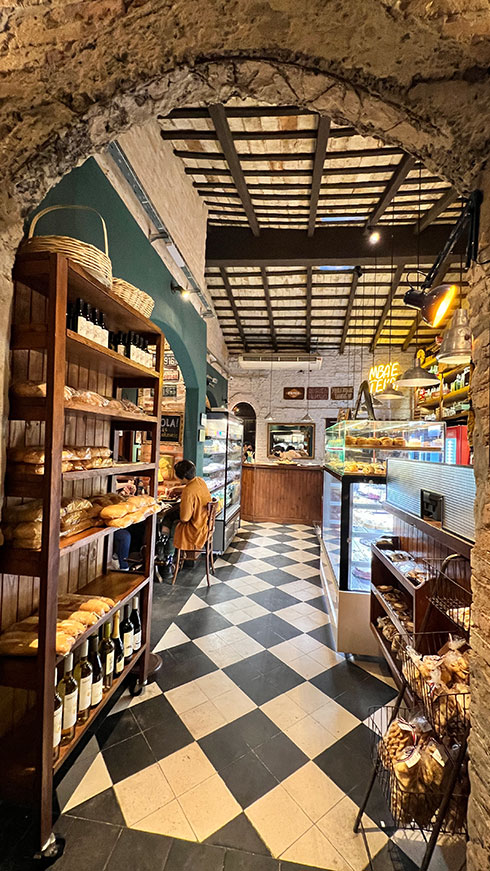 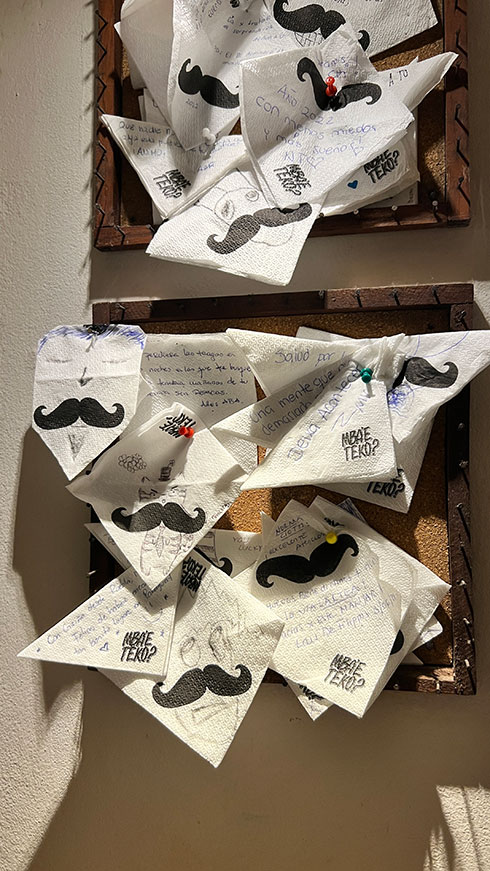