Starting early morning from Hvammstangi, we were driving north and then north-east for our final stopover at Akureyri.

Climb up the fortress for the viewing dial and gorgeous views of Vesturhópsvatn lake. 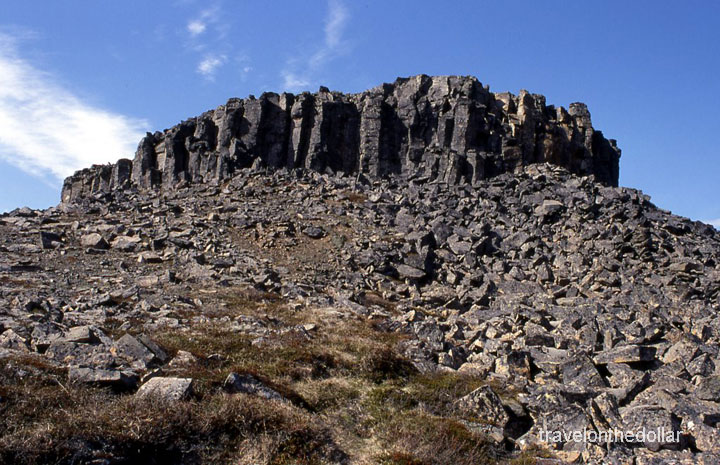 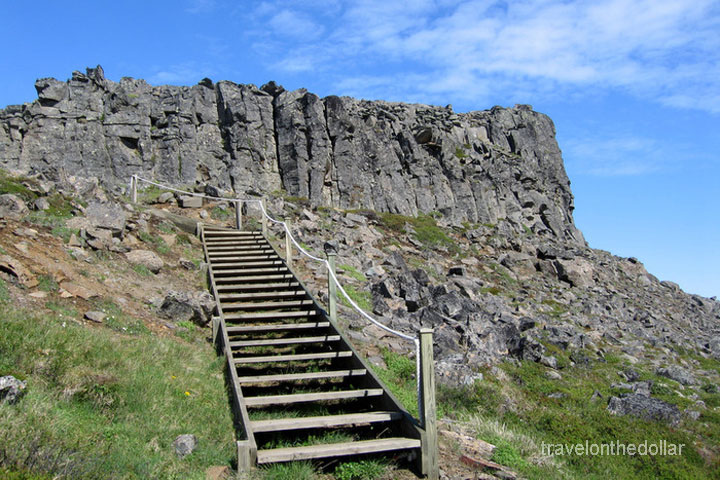 [Staircase leading up to Borgarvirki] 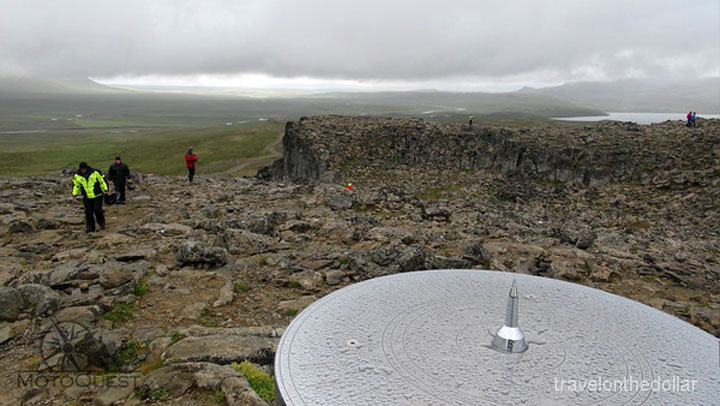 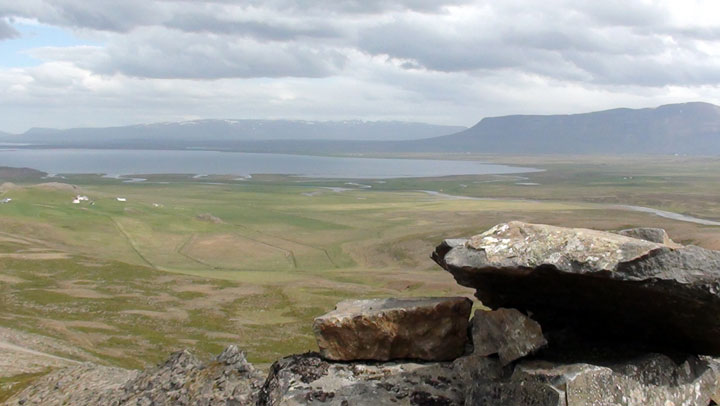 [View from top of Borgarvirki]

The first monastery in Iceland was established here in 1133 and many of the Icelandic Sagas were written in this monastery. In the 19th century, one of the first stone churches in Iceland was built here and it is worth taking a look into the church where you can see a collection of interesting artifacts from several centuries.

Þingeyrarkirkja – the church at Þingeyrar – gives it a grand look and it is now the only visible reminder of the ancient dignity of the place. The congressman Ásgeir Einarsson had the church built. Prior to this there was an old turf church the site. Ásgeir decided to build the church with stone, but suitable material was not available in the vicinity so in the winter 1864 – 1865 Ásgeir had stone moved from Nesbjörg to the church site. The stone was taken by sled over the ice-covered lake Hóp, an 8 km long journey. A Stonemason by the name of Sverrir Runólfsson built the church walls. Each stone in the walls was put in stowage or tied down and also glued with chalk, therefore the stones have not moved to this day. Ásgeir and Sverrir arranged most of the plans for the church and its building took 13 years.

On The 9th of September 1877 the Reverend Eiríkur Briem from Steinnes consecrated the church. Objects from the old church were moved to the new one. The church has many valuable objects. The oldest of these is an altarpiece made of alabaster probably from the 13th century. The pulpit is probably of Dutch origin and from the year 1696. The pulpit was a gift from Lárus Gottrúp lawyer, who resided at Þingeyrar monastery from 1683 – 1721. He also gave a bounteous silver baptismal font with the date 1663 and the date 1697. The church also owns a silver chalice and an alter linen with the date 1763.

Between the church and the old church site is an oval shaped garden called Lögrétta. It is 25 meters in diameter from the east to west and 20 meters from north to south. It is a protected site and is believed to be the ancient assembly place (þing) for the Húnavatn region. 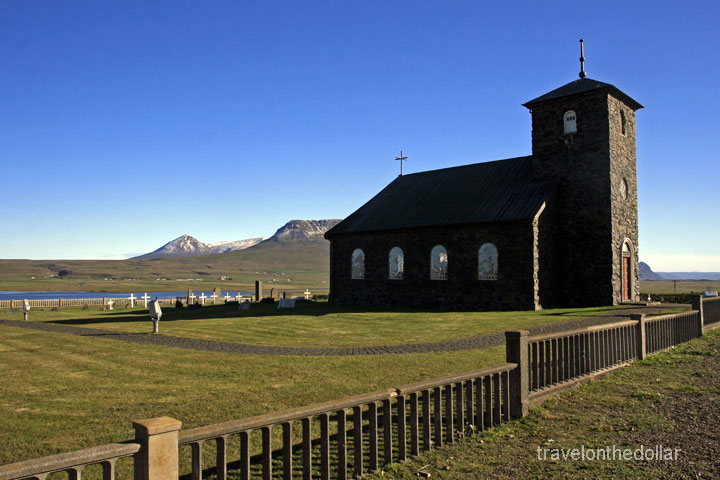 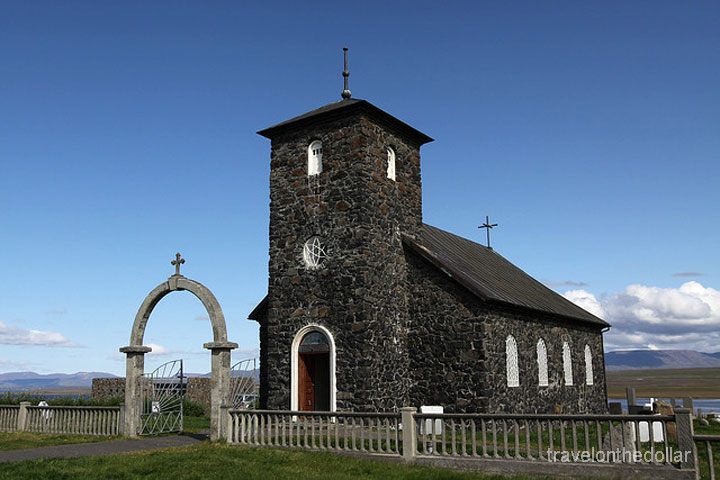 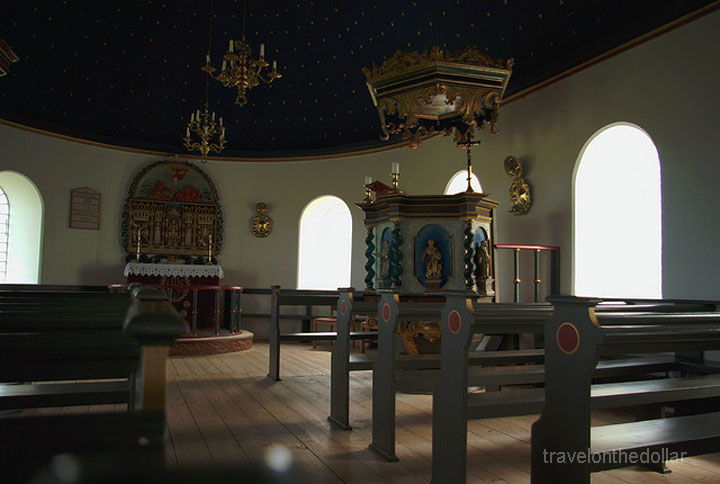 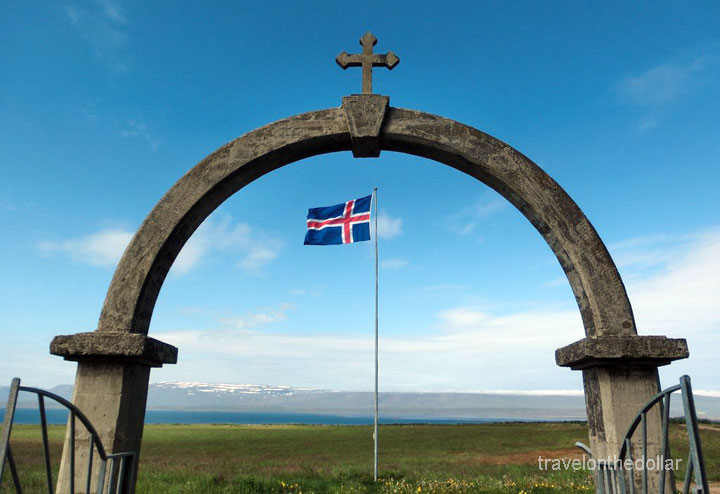 Driving further up north on route 1, and through the 25 km-long Langidalur valley, and over the mountain pass Vatnsskarð, we reached Blönduós which is a small seaside town in the northwestern part of Iceland.

Approximately 1000 people live in the town known for its textile museum, and for excellent fishing spots. The Blanda River, which divides the town in two parts, is one of the best rivers for salmon fishing in Iceland. It has become so popular to fish in the Blönduós region that many tour companies now offer special fishing holidays.

Blönduós doesn’t have a lot of hotels that are open all the year round, but during the summer there is a fine selection of cottages, guesthouses, and hotels to choose from. 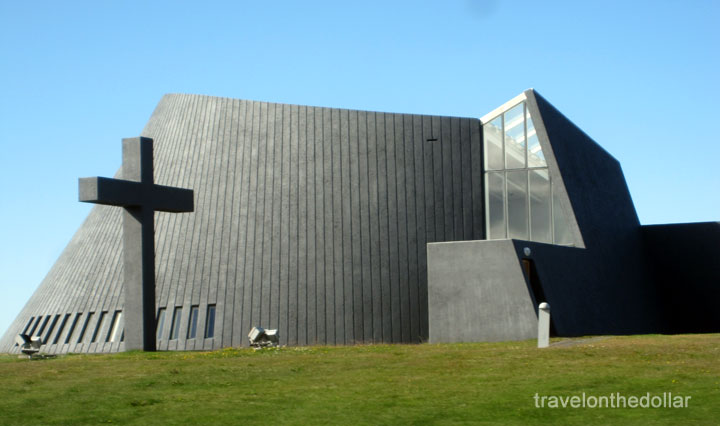 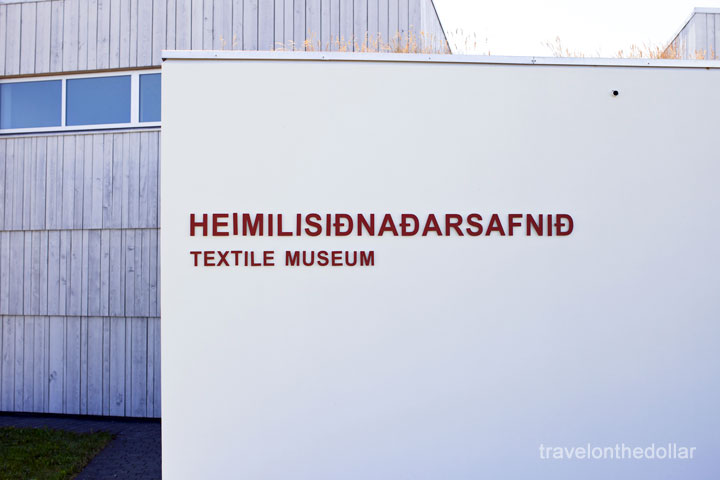 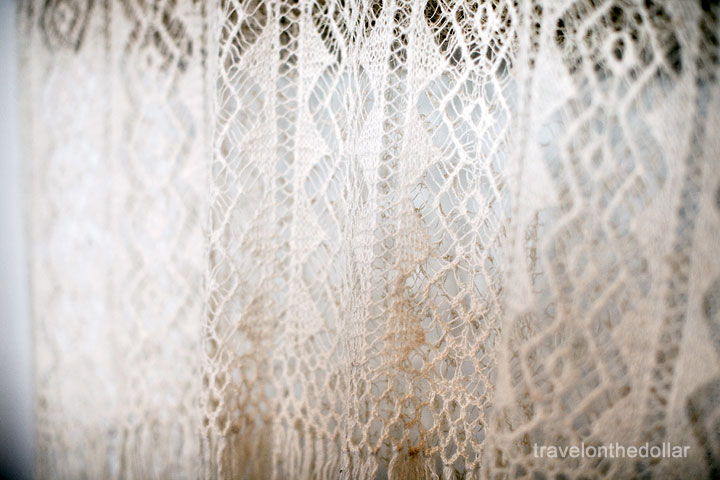 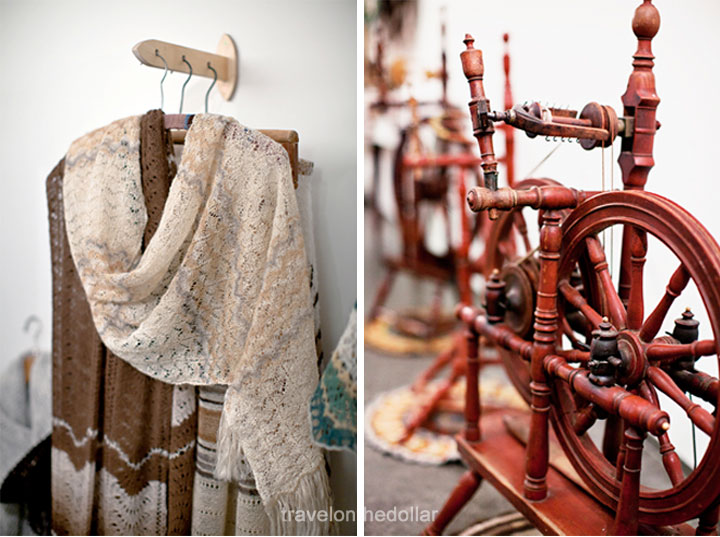 Turning left on Route 75, it was time to do some sightseeing in Skagafjörður. Our first stop was at Víðimýrikirkja, a turf church that is under the protection of the Iceland National Museum. Although this church was built in 1836, there’s a belief that a religious structure was on this site since the 14th century. The turf church has gables built from driftwood, and the roof is covered with sod. It is considered to be an excellent example of traditional Icelandic building style.

We were not able to get in as the door was locked and there was no one around to let us in, so we made do with just wandering around outside. 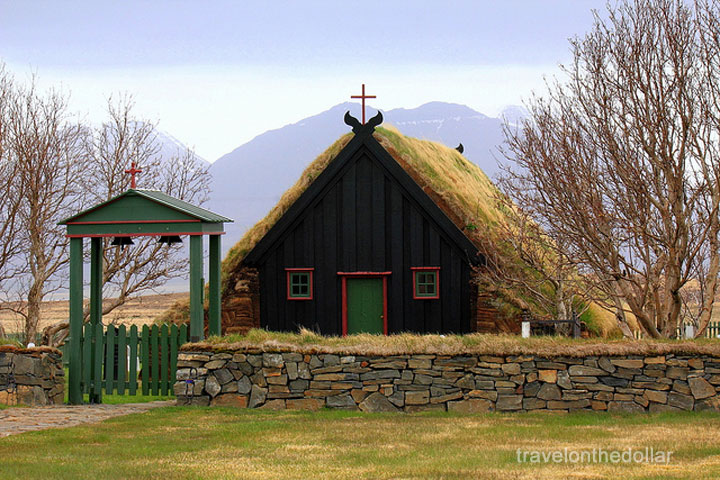 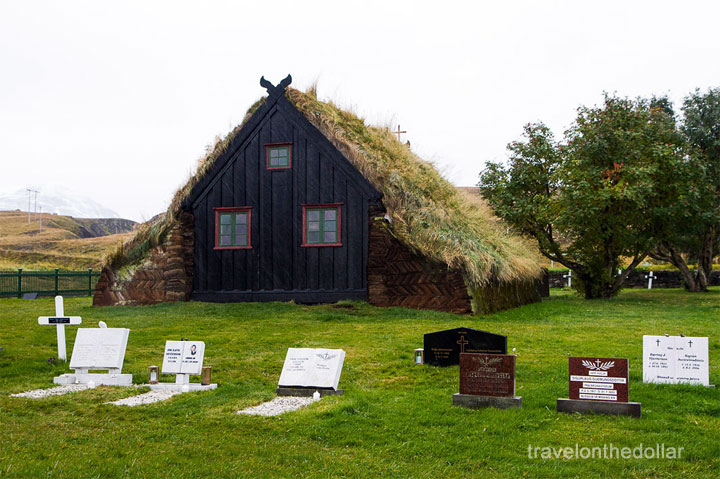 Continuing north on Route 75 gets you to Glaumbær, that has one of the most interesting open air and folk museums in Iceland, and one of the few remaining Icelandic turf farms, oldest parts of it from the 18th century.

Beside the turf farm there are buildings from the 19th and early 20th century, in a former school for housekeepers a very nice café is been runned, where you can get traditional Icelandic cakes and other snacks.

Drive back to Varmahlíð and continue on road no. 1 over the mountain plateau Öxnadalsheiði to reach Akureyri. 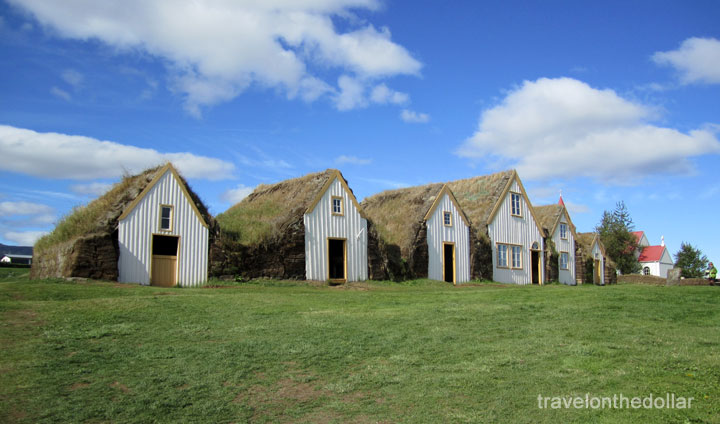 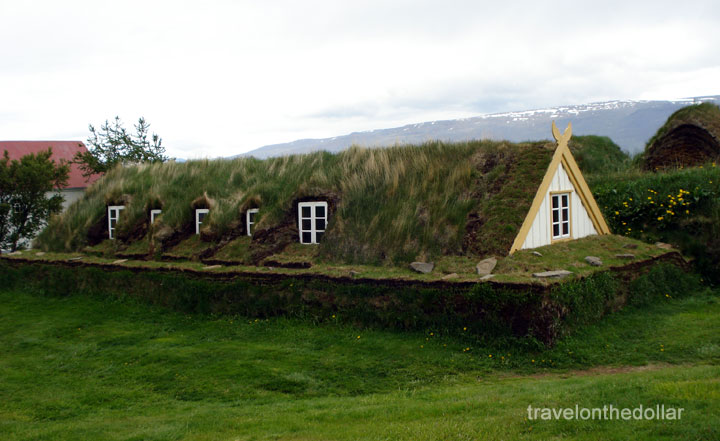 On our way to Akureyri, we stopped by this “cave” formed by the melting snow and waterfall above it. 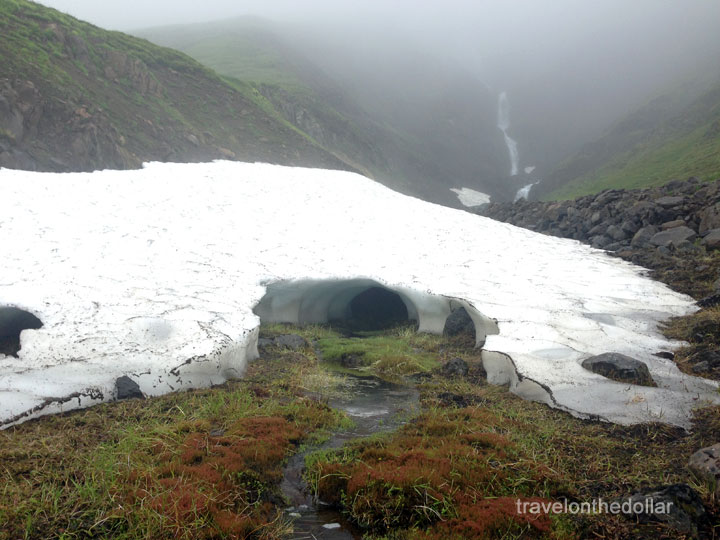 At first sight, Iceland’s second largest city appears like it was transplanted from the Swiss Alps. It sits on the southwestern shores of the North Coast’s Eyjafjordur Fjord, one of the most breathtaking fjords in all of Iceland. Rising up immediately behind the city are azure farmlands that slope gently up to granite mountains. The mountains are capped by snow year round, and in the winter they offer the best skiing in the country.

One of the most extraordinary aspects of Akureyri is its warm climate. Although it sits only 60 miles from Arctic Circle, it has some of the best weather in Iceland. Summer temperature frequently range in the high 60’s (20C), making the city the most popular weekend getaway for citizens of Reykjavík. To get an idea of just how warm it is, one need only to visit the city’s best known attraction, the Botanical Gardens, where over 2,000 species of native and non-native plants flourish without the help of a greenhouse.

Akureyri is a transport hub for the region; it is well connected by land, sea and air. Route 1 (the Ring Road) runs through Akureyri and connects it with other parts of the country. The town has an airport, which is mostly used for domestic flights, with occasional international flights. 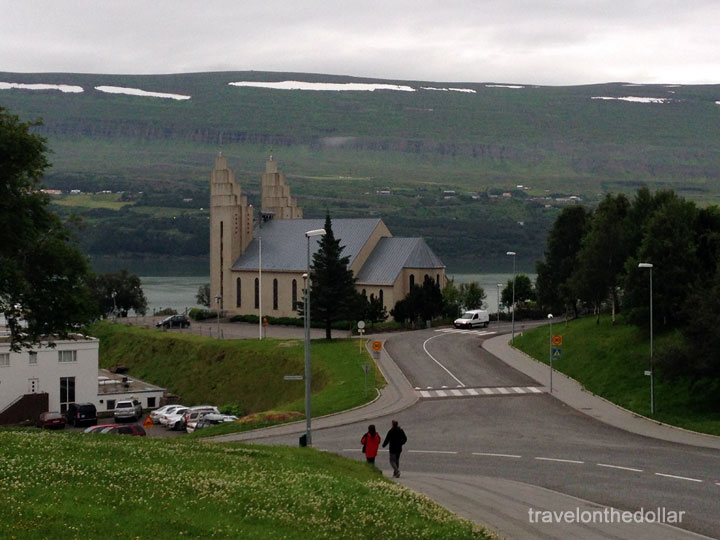 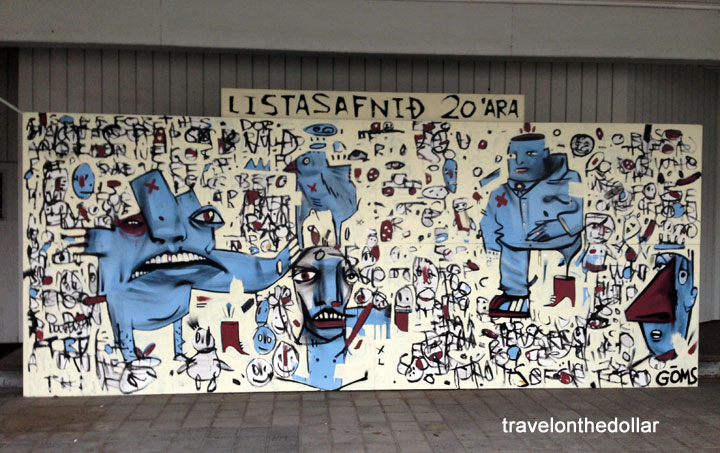 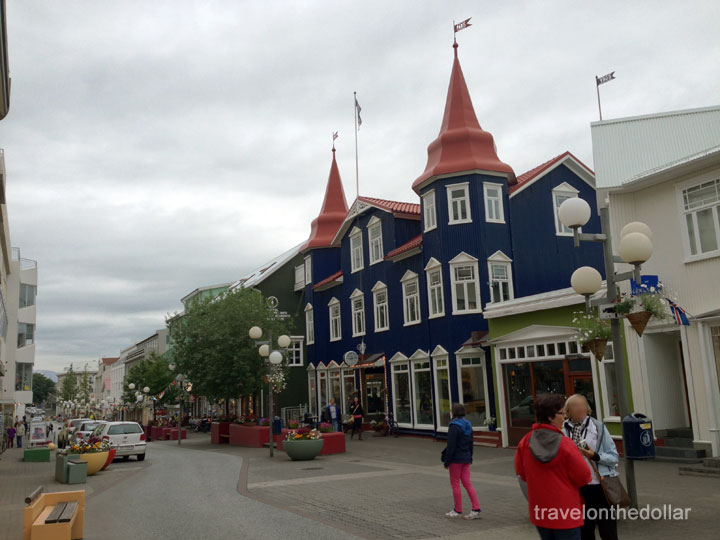 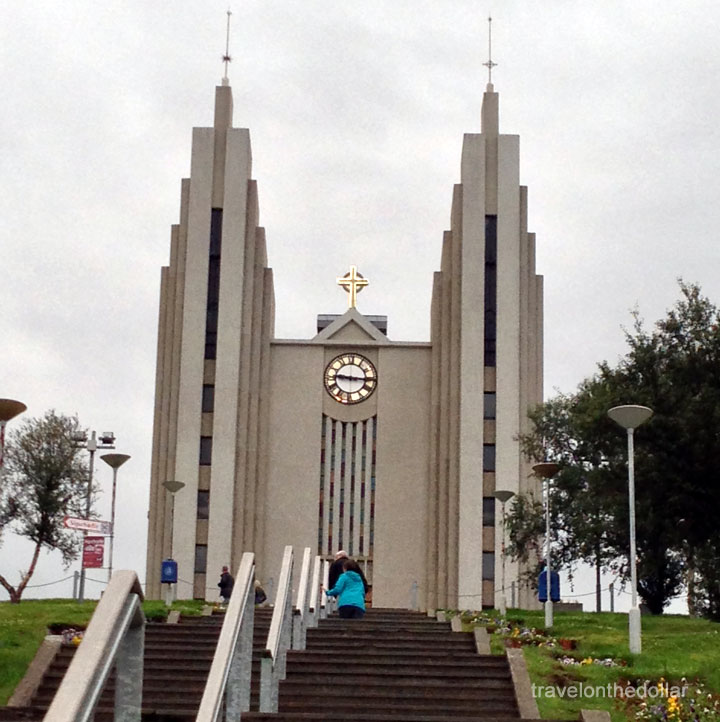 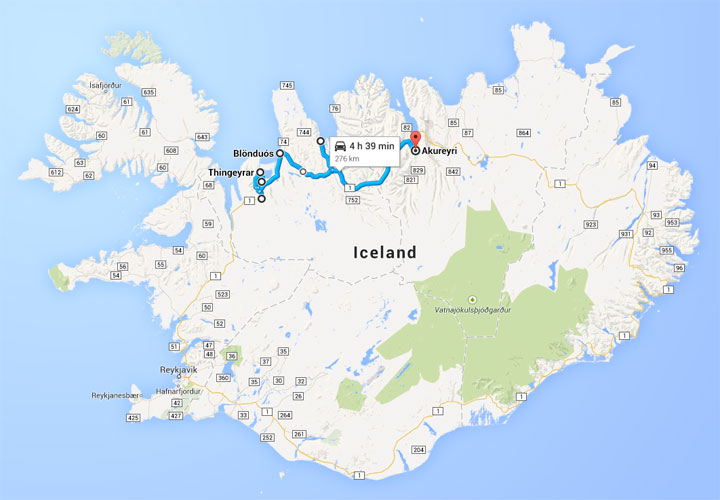