After an early and full continental breakfast at the hotel, I walked to the shoreline of Paphos. At the far end of the corniche is the Paphos Castle originally a Byzantine fortress built to protect the port. Today you can see the Western Frankish Tower with the Venetian additions as restored by the Ottomans in 1592, according to a relevant inscription above the entrance of the castle. The main fortress of the city was located in Saranda Kolones, about 600 meters west, and was destroyed by the earthquake of 1222. 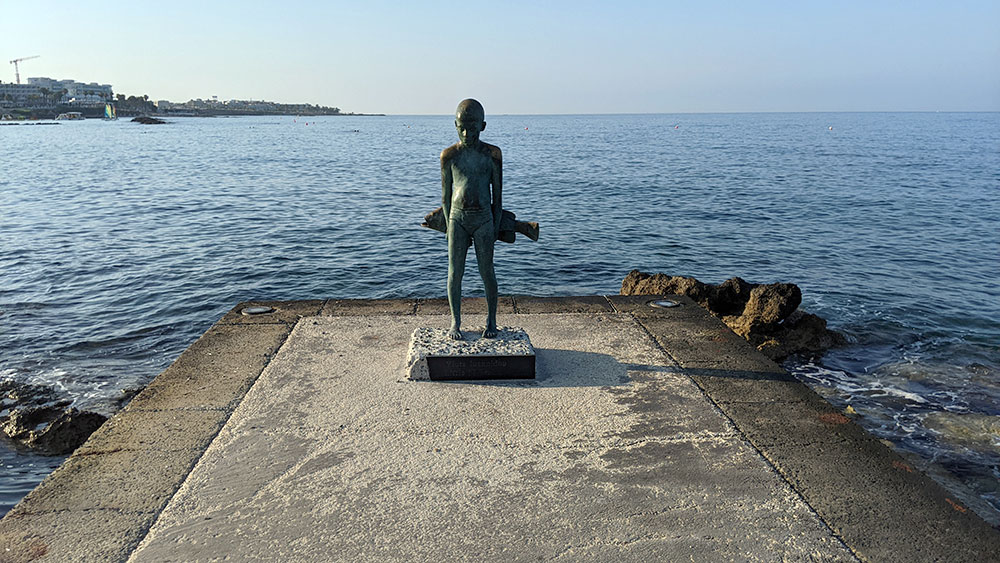 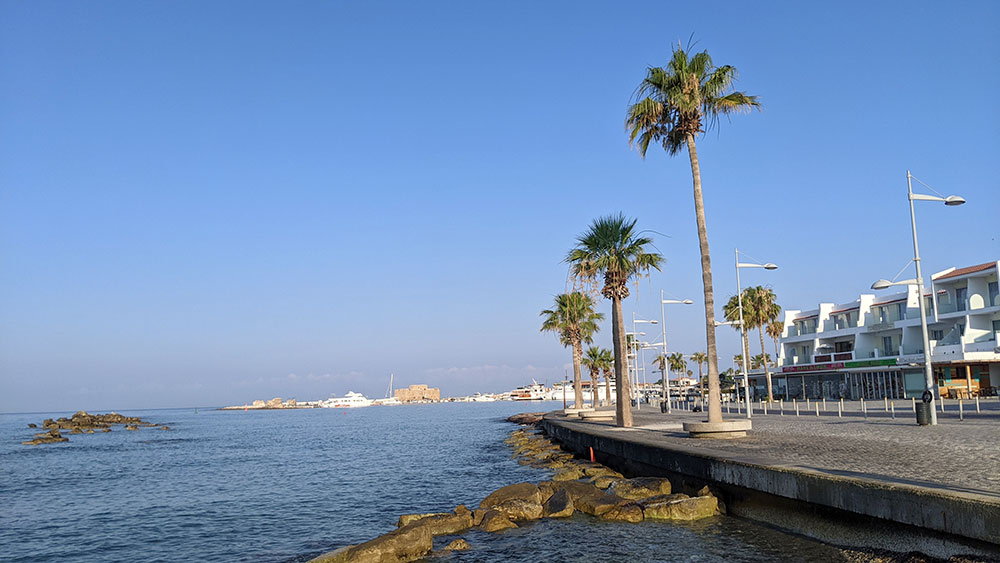 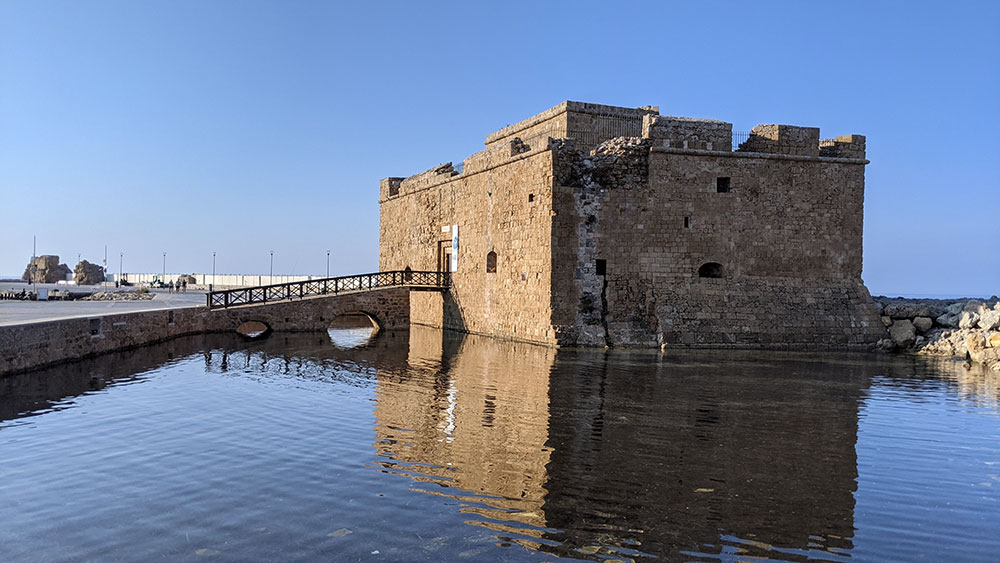 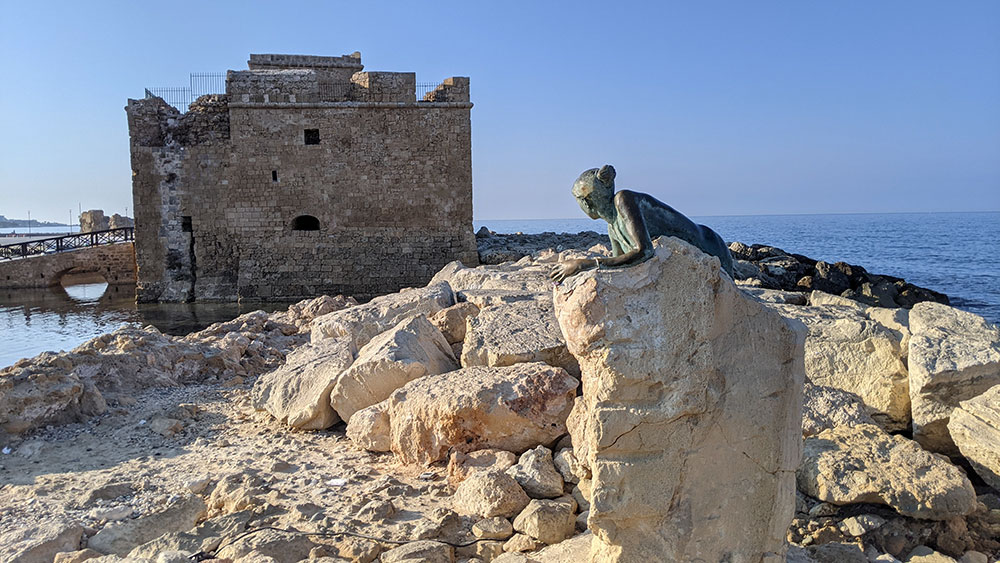 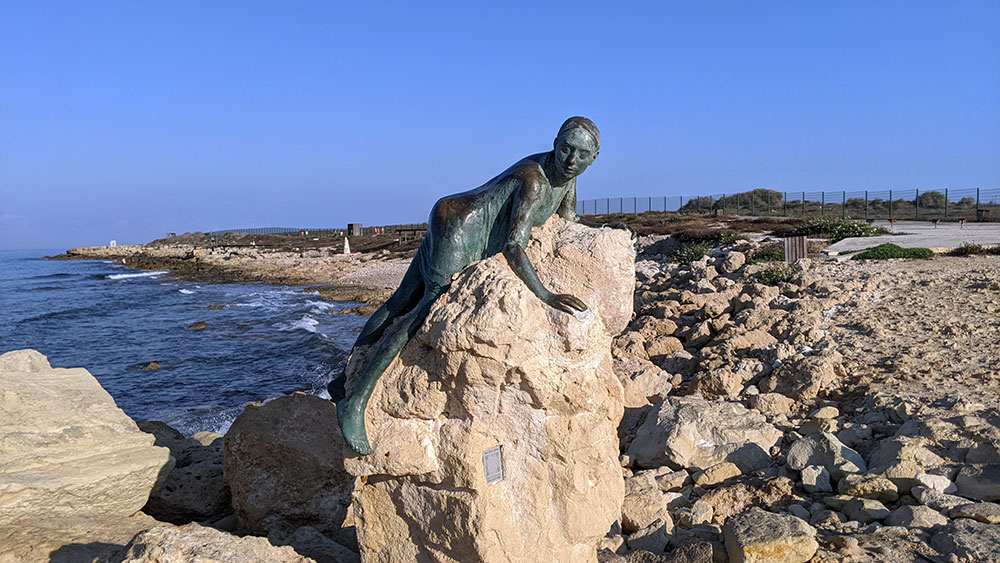 The plan for today to see some sights in Paphos, head over to the Shipwreck a few kilometers from the city, and then driving cross-country to the capital city of Lefkosia (Nicosia). This is the route map for today: 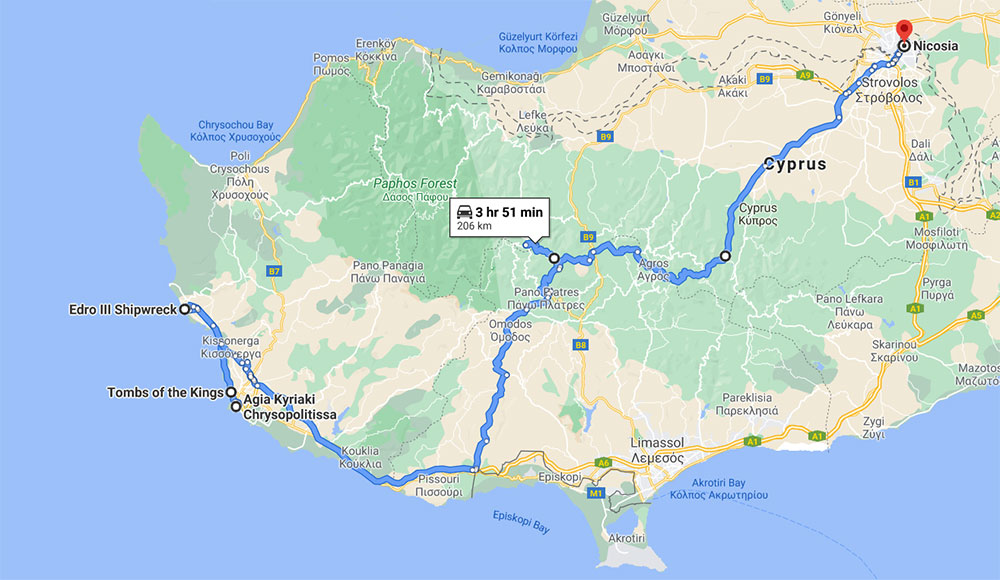 First stop was a drive to the next UNESCO World Heritage site of Chrysopolitissa Basilica. It was built in the second half of the 4th century AD and was one of the largest churches on the island. This fascinating site was home to one of Paphos’ largest religious structures. Today, there remains a Christian basilica. As you come into the church’s ground, notice St Paul’s Pillar. Legend has it that this is where St Paul was whipped due to his efforts to preach Christianity, before the Roman Governor Sergius Paulus was converted to Christianity.

In the middle of the site you will also find a medieval church, built around 1500 AD. It is still operational and is used as the main Anglican church in Paphos. You can go inside and see some beautiful traditional religious artwork. 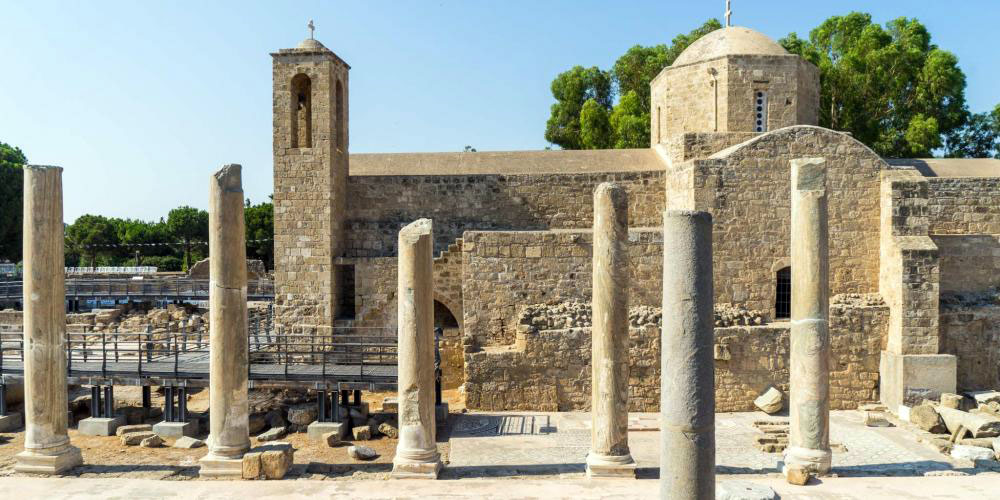 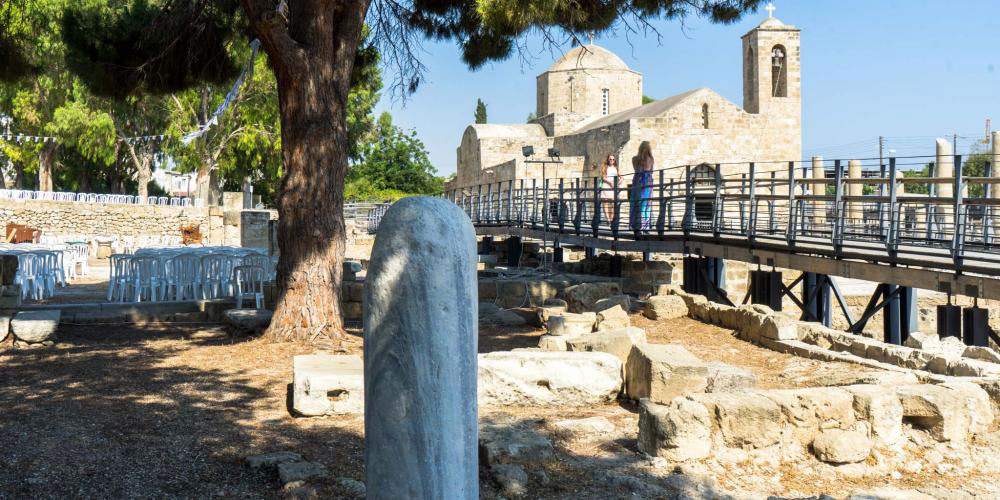 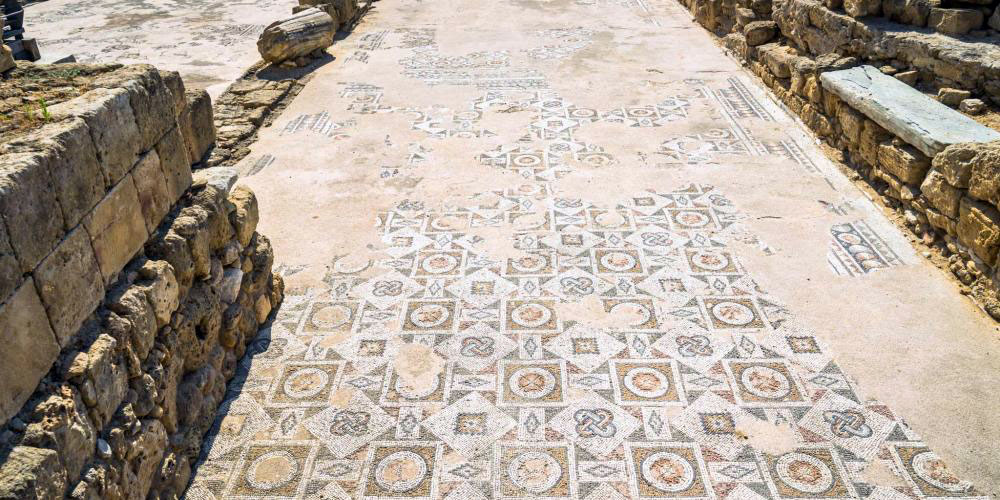 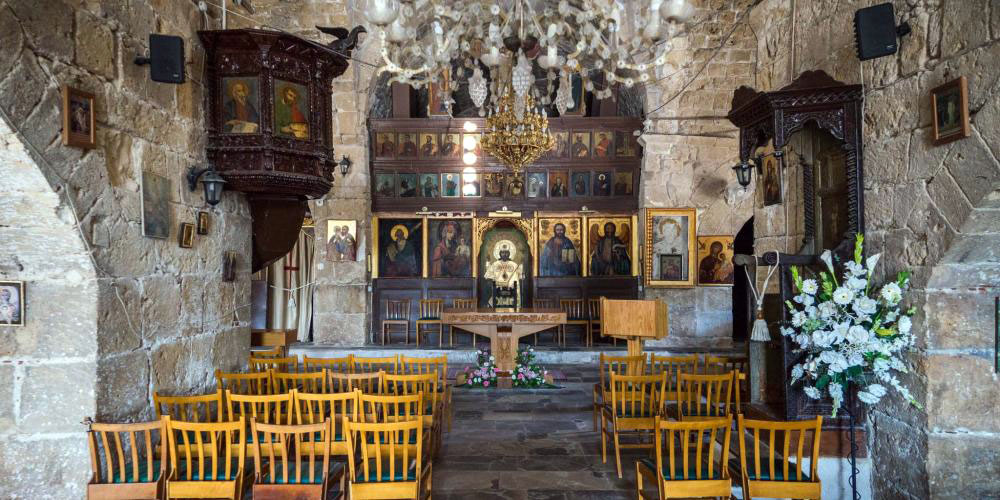 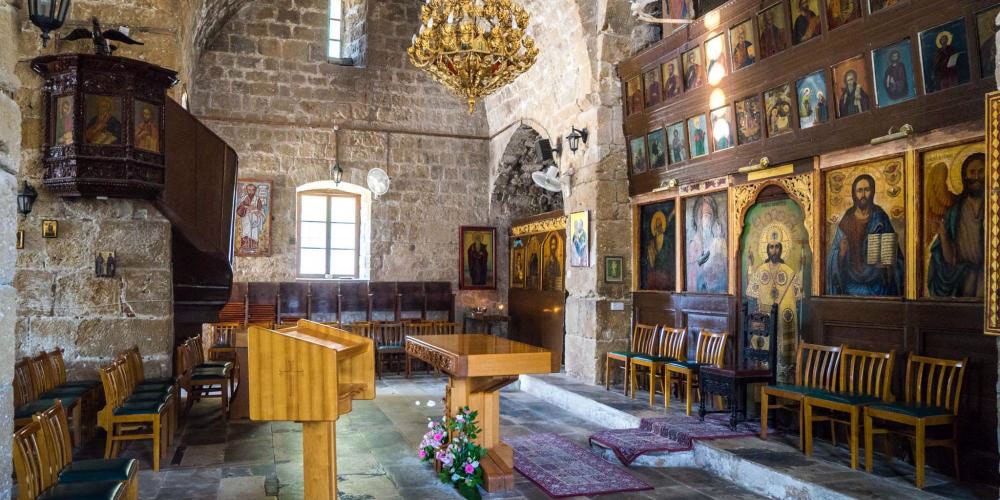 Tombs of the Kings

Next stop was the must-see sight in Paphos – the Tombs of the Kings that opens at 8:30am. The Tombs of the Kings is part of the Paphos Archaeological Park, which a UNESCO World Heritage site, but has a separate entrance and a separate entrance fee of 4.50€. A necropolis that dates back to the 4th-century BC, the tombs are carved out of the rock and are mostly underground. The biggest and most remarkable tomb has a rectangular atrium surrounded by doric columns. The burial chambers and loculi surround such atrium. 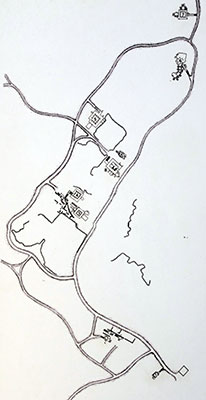 There are eight distinctive tombs sites, some smaller and some bigger as show in the map here (click map for larger image). The architecture of the tombs show similarities to the Hellenistic tombs found in Alexandria with Greek architecture characteristics. Greek civilization, like many other ancient civilization, had specific funeral rites and death was seen as an important part of life. To enable the dead to have a successful passage into afterlife, it was important to perform the correct ritual.

The tombs are centered around a court that opens to the sky. There are either burial chambers around, tombs in the ground or loculi (narrow niches) cut into the walls. The walls were richly decorated with colorful frescoes. 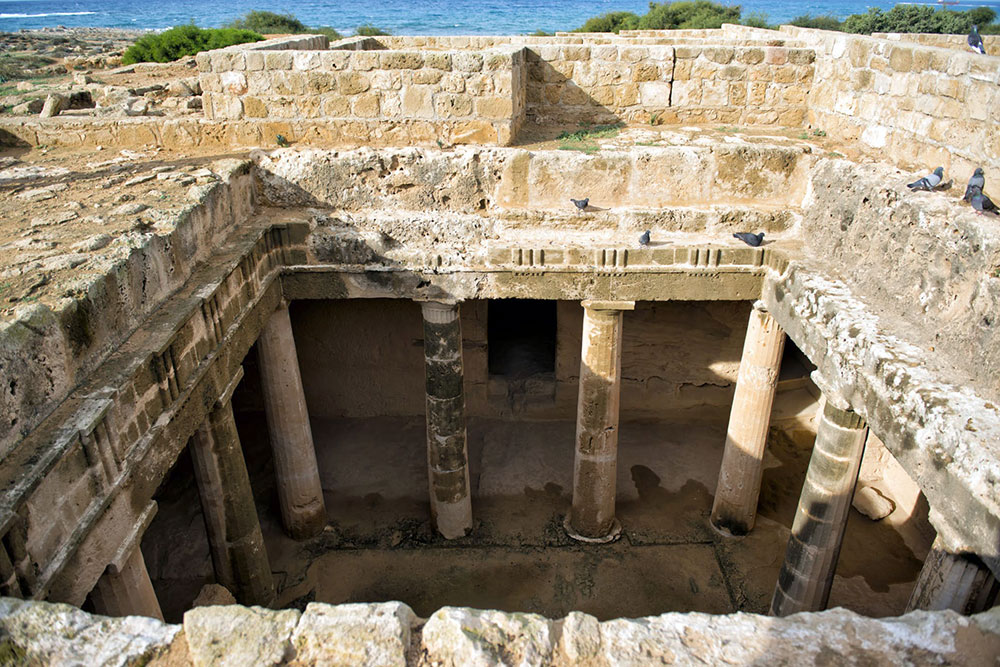 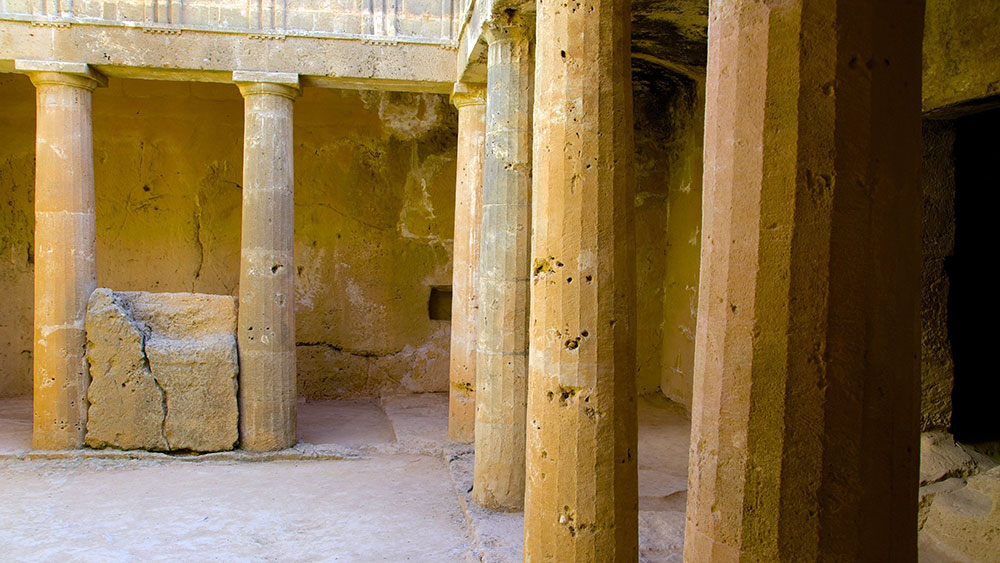 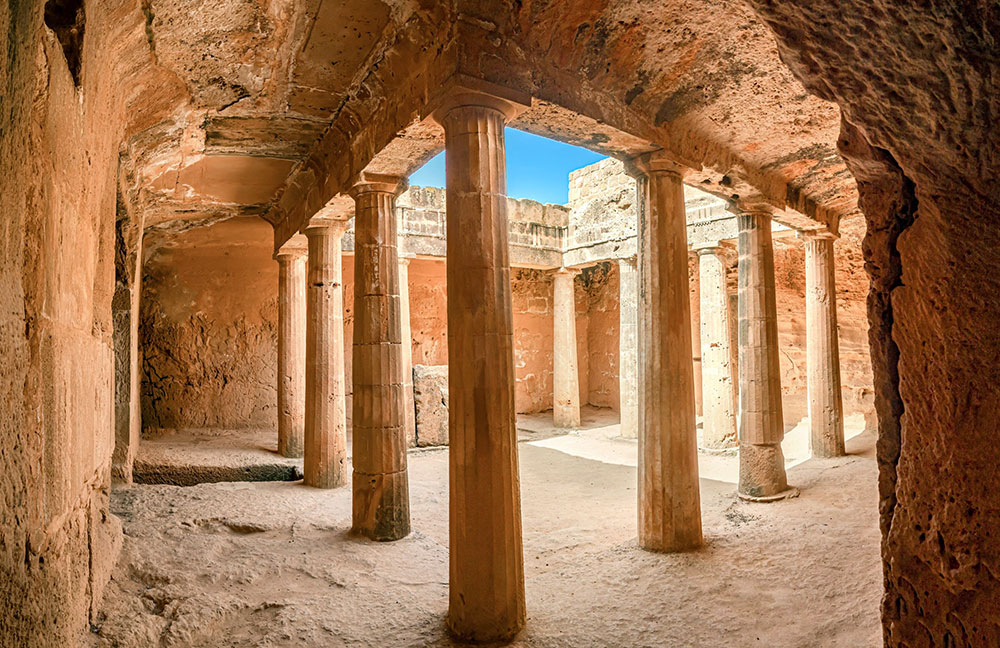 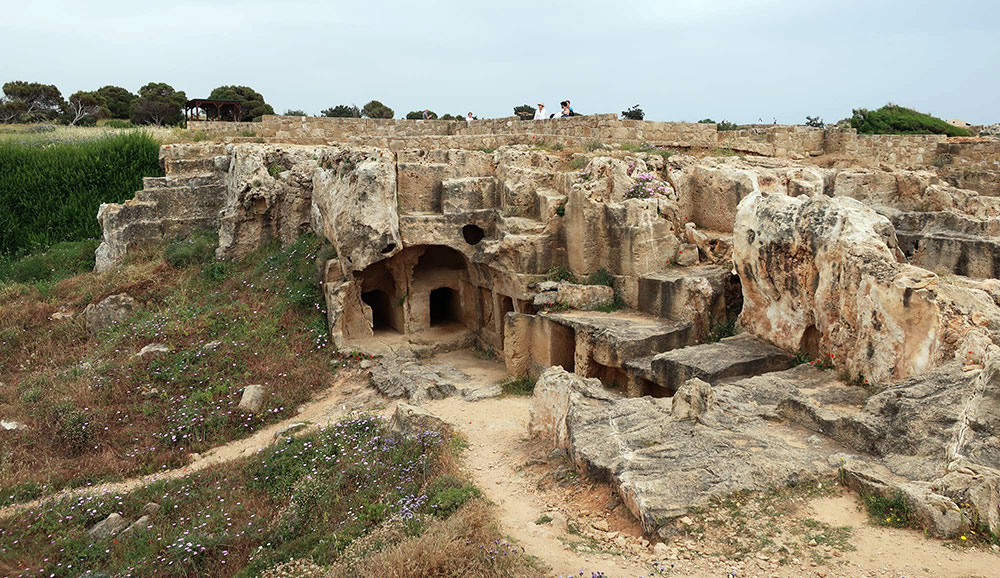 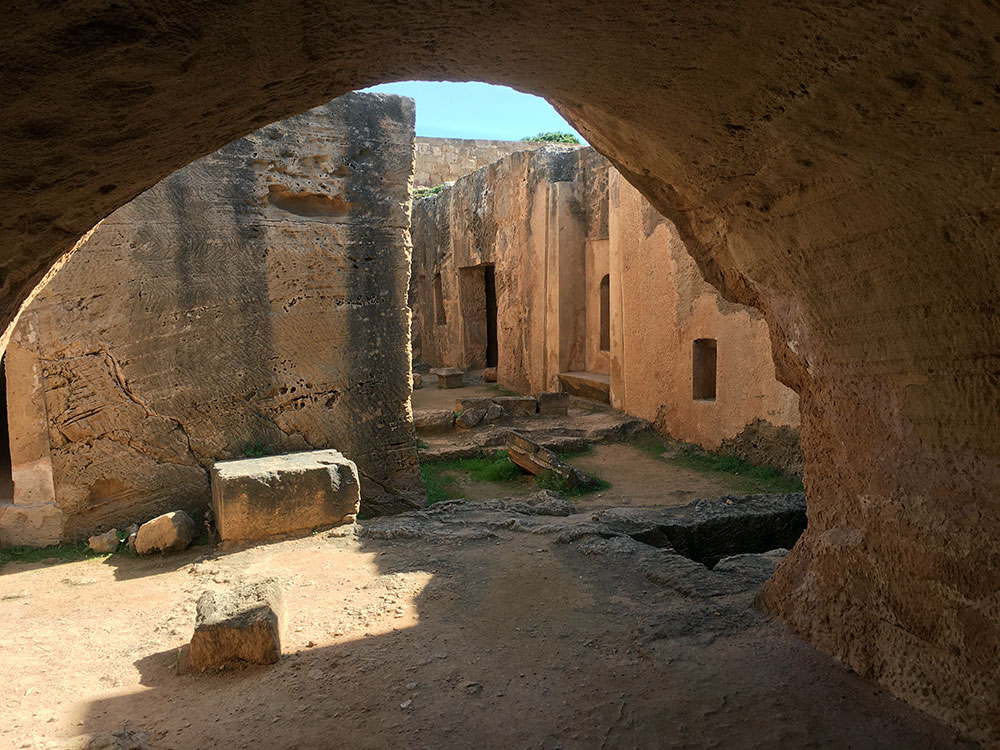 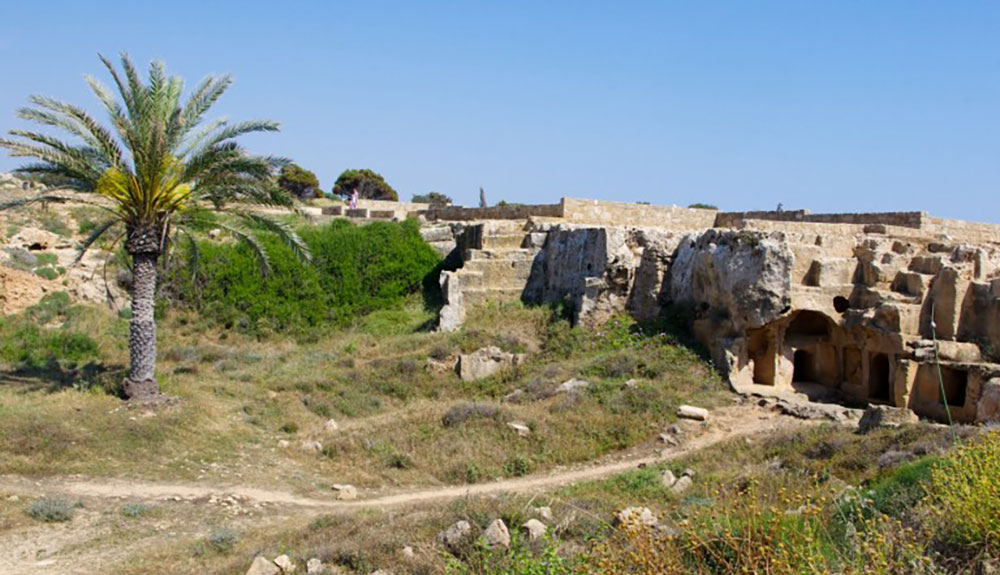 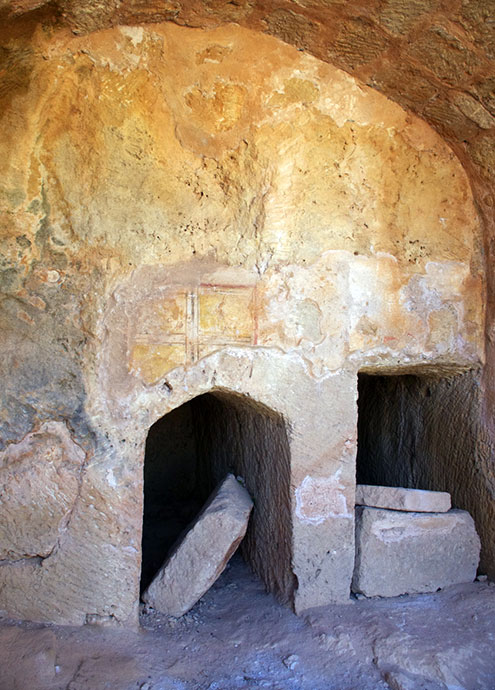 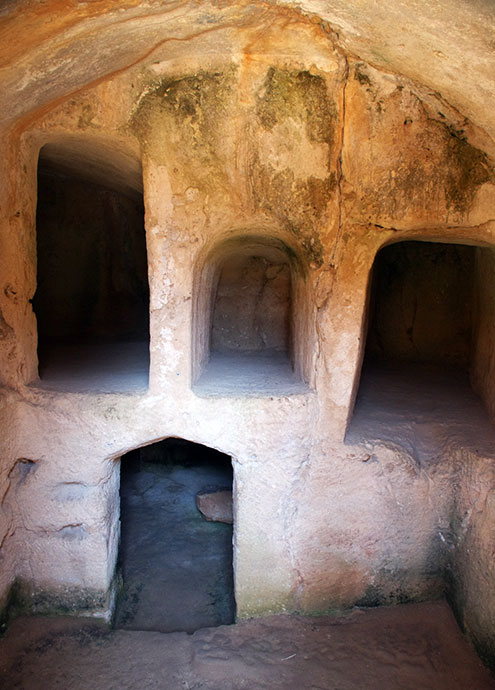 After the main sights in and around the city, I drove to the Edro III Shipwreck. The Sierra Leone-flagged ship ran aground off at Pegeia on 8th October, 2011. The crew was made up of 9 sailors of which 7 were Albanian and 2 were Egyptian. The ship departed from the port of Limassol with Rhodes as its destination. The ship was loaded with gypsum boards and the weather was deemed fit for the voyage.

The ship crossed the mild sea, directed towards the west to the open sea, but a severe storm ruined the voyage of the ship and after many hours of fighting with the waves in the darkness it was stuck in the rocks, during the morning of the 8th of October 2011. The crew was saved by a local British military Helicopter. 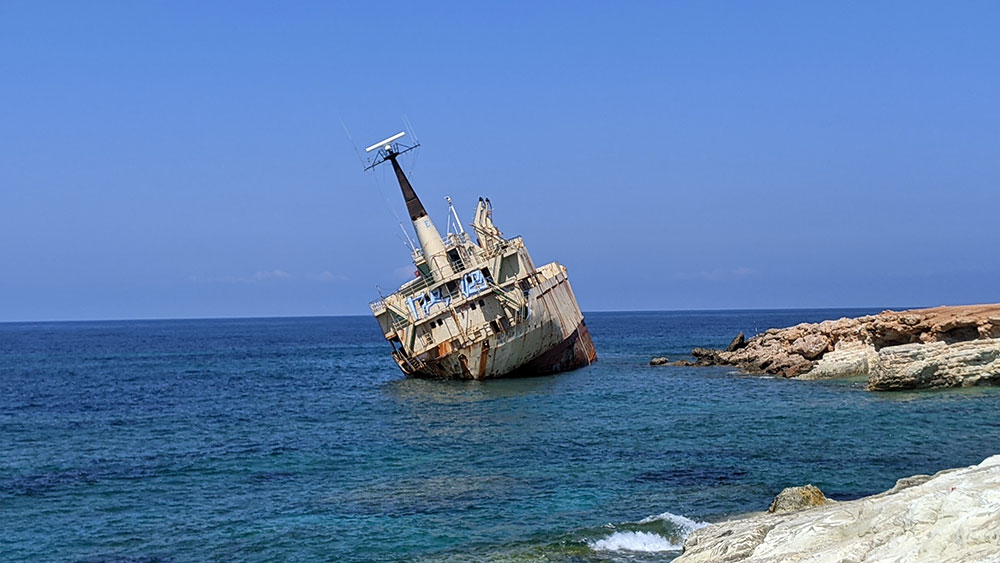 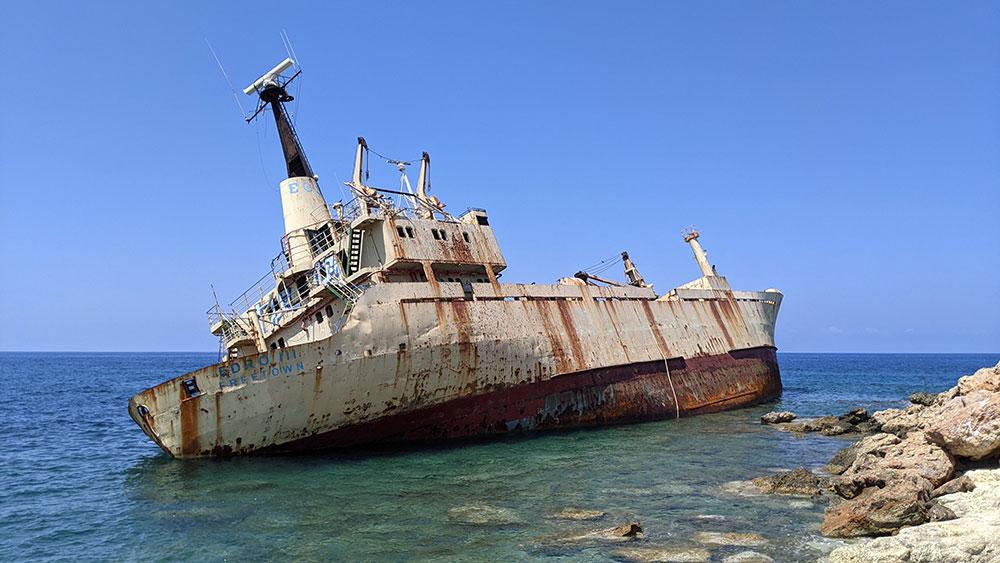 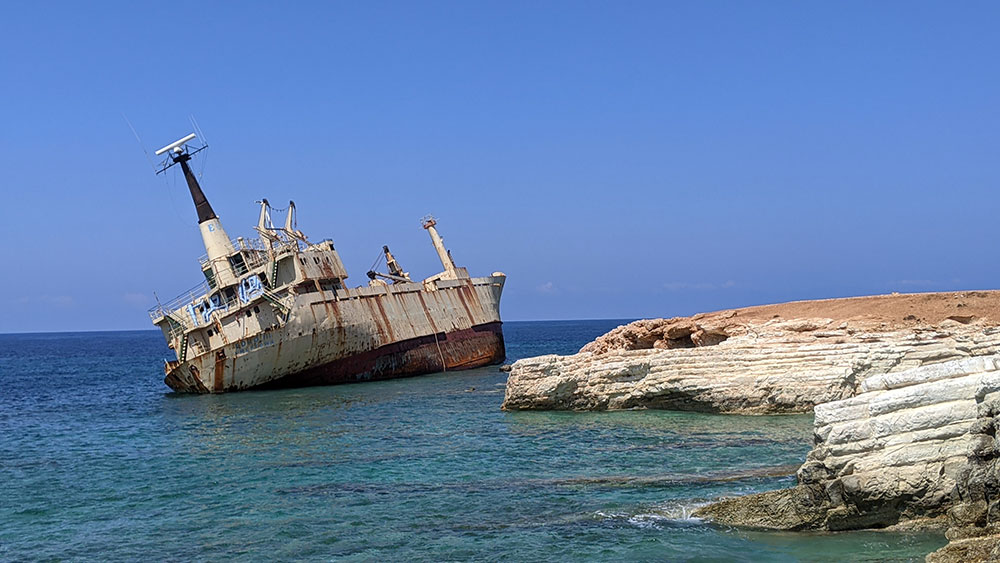 It was past 12pm by the time I started from the shipwreck, so I stopped by a cafe in Paphos before heading out to Lefkosia, the south side of the divided capital city. It takes about 3.5-4 hours depending on the traffic.

I reached Lefkosia around 4pm, checked-in to the hotel in the heart of old town, and dropped my car in the city which was about 15 mins walk from the hotel. Walked around the Ledras street for the rest of the evening.