This day focuses on all the highlights in the mid- and south of the island of Trinidad. Here’s the route for day 2: 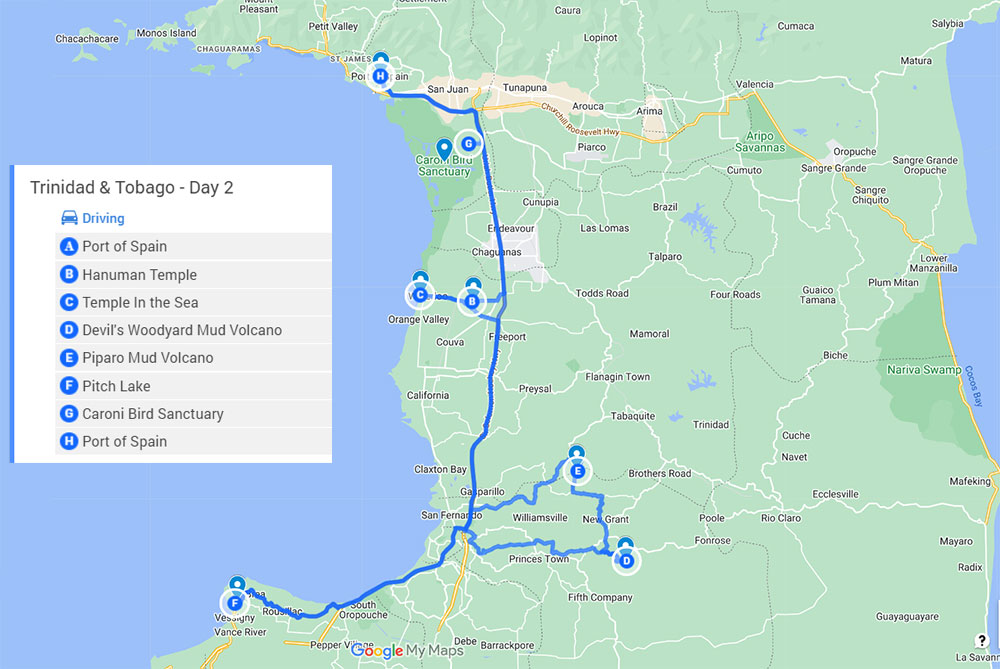 Towering over the village of Carapichaima is the spectacular 85-foot tall statue of Lord Hanuman, the largest Hanuman murti (idol) outside of India. Lord Hanuman is a Hindu god regarded as the most revered disciple of Lord Rama who exhibited great strength and bravery. Its magnitude employs its devotees to grow in height spiritually. The Dattatreya Yoga Center and Mandir upon which the statue is situated is built in a Dravidian style of architecture popular in South India. 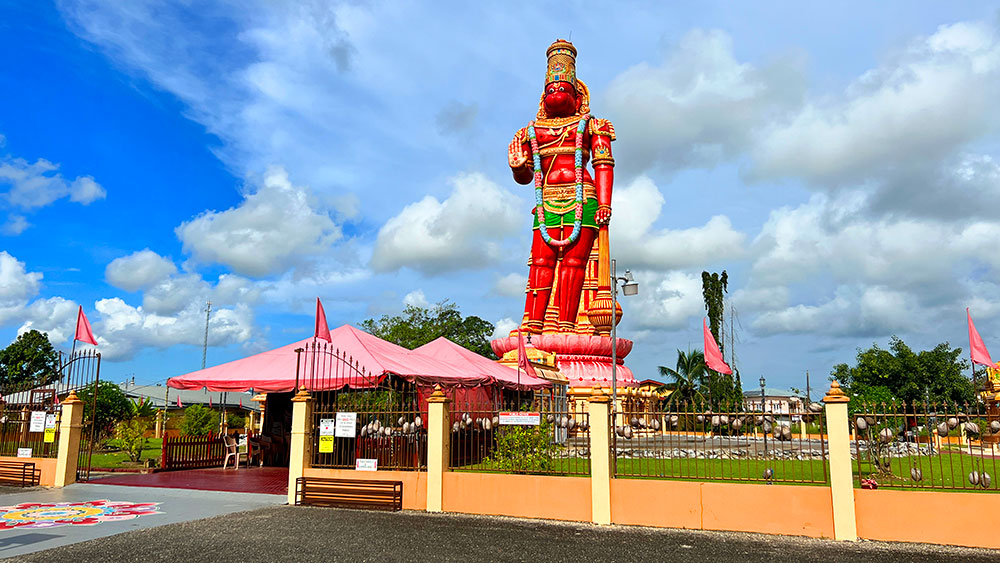 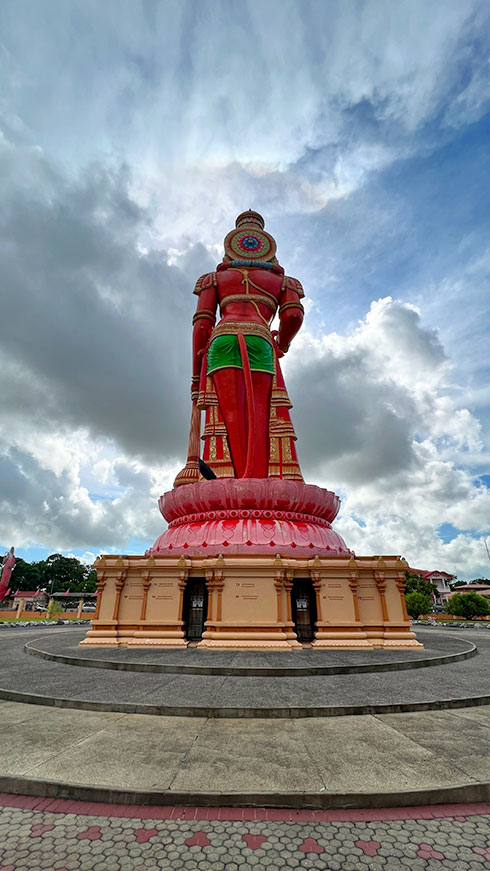 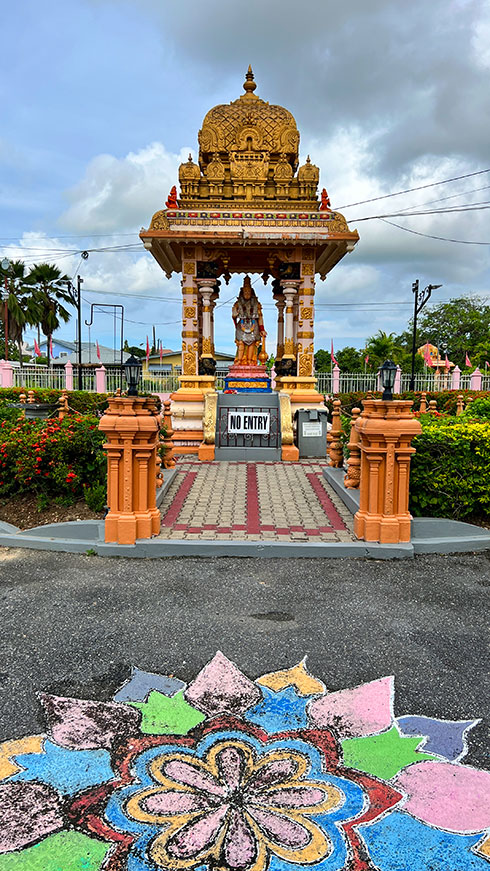 [Other statues in the temple complex]

Temple at the Sea

Connected by a 200-metre pathway to the Gulf of Paria, the Waterloo Temple, better known as ‘Temple in the Sea’ is a Hindu temple built by Seedas Sadhu, taking him 25 years to complete the temple. It houses the idols of Siva, Hanuman, Durga and others, holds a Sunday service and is open to visitors. The temple is an octagonal-shaped colorful structure that has a statue of Seedas Sadhu at its entrance. 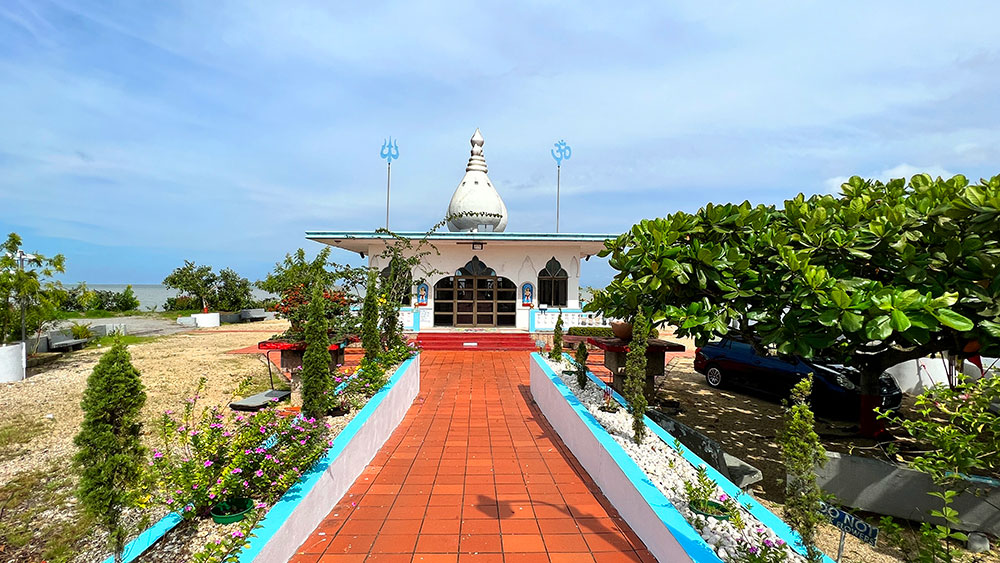 [Temple at the Sea, Trinidad] 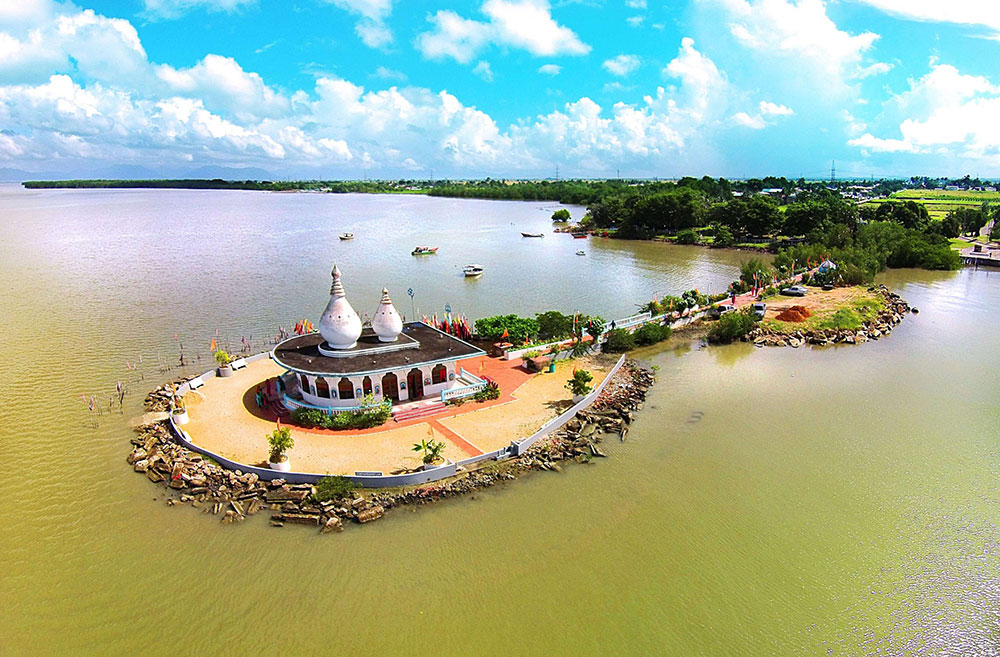 [Drone picture of the Temple at the Sea] 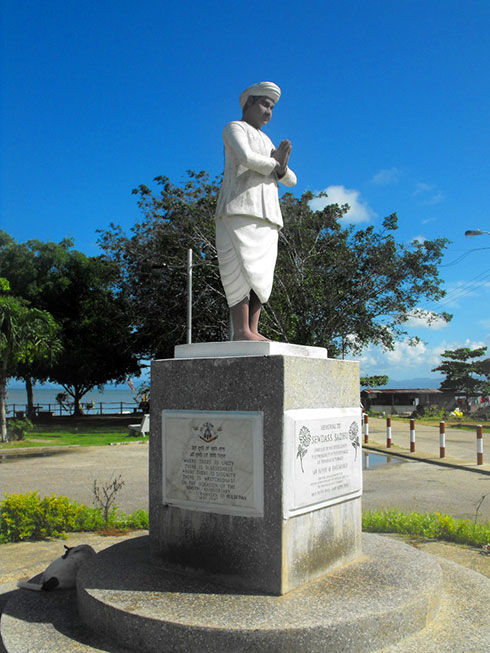 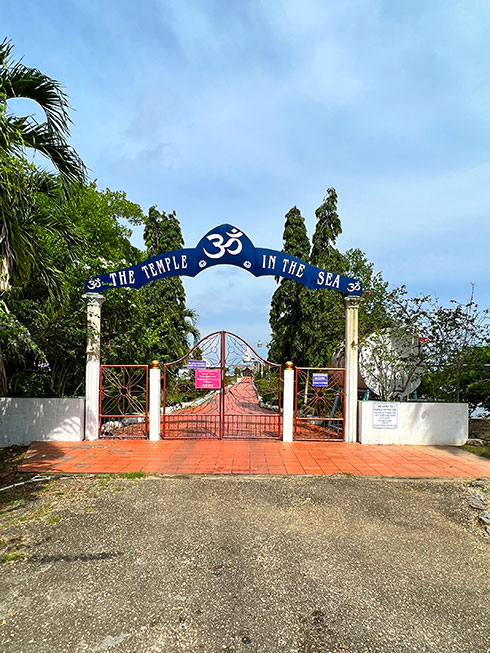 [Entrance gate to Temple in the Sea]

An area of several vents of warm bubbling mud scattered across the area form cones as it cools. Several picnic benches have been placed around the area surrounding the mud volcano vents. After its first eruption in 1852 when the entire village was shaken and trees fell, scared villagers were superstitious who believed that the devil came out of the earth and cut down the woods.

Travel tip: – Skip this place. You will be disappointed! 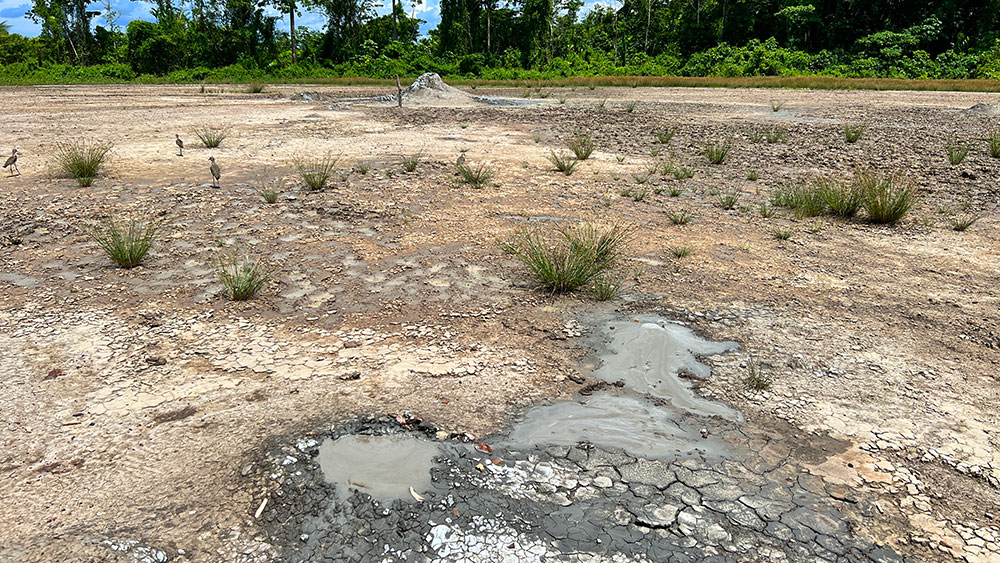 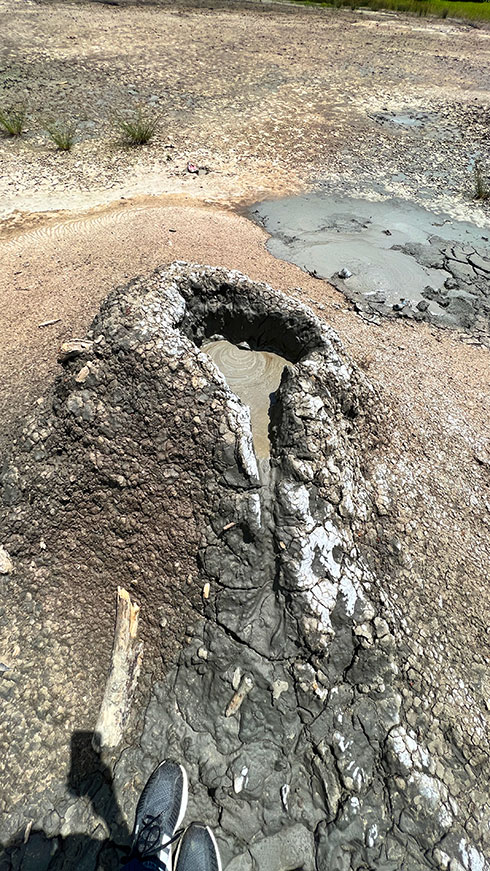 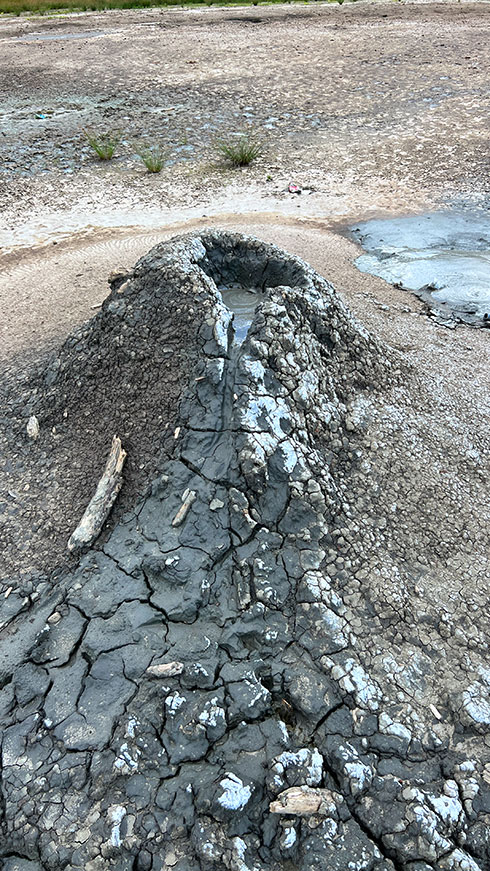 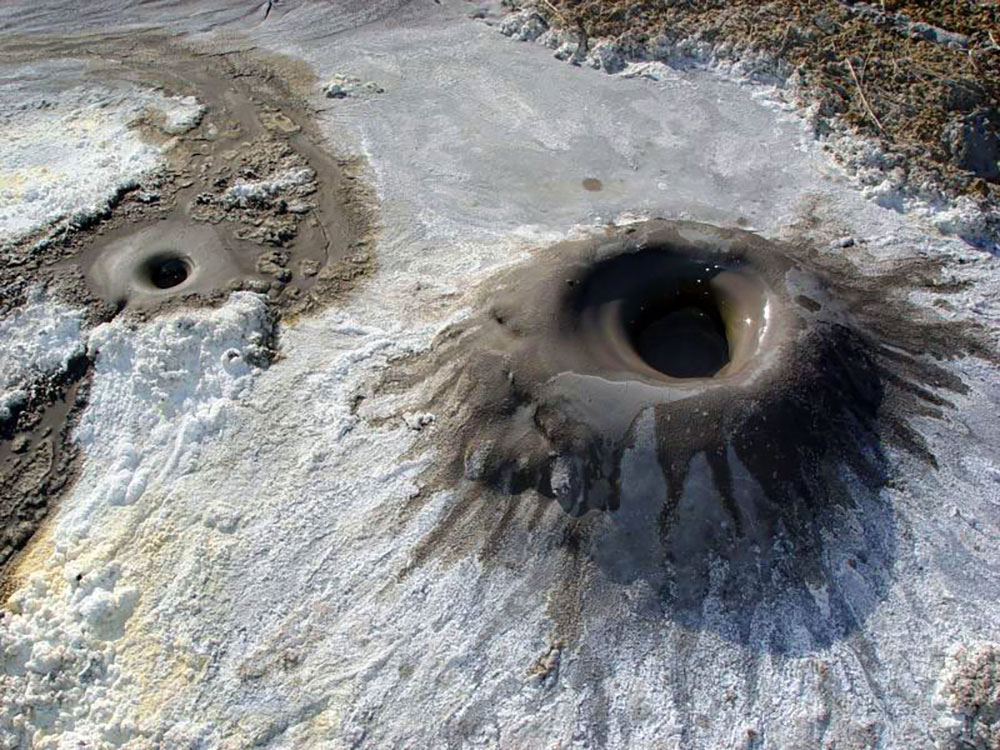 A few kilometers from the Devil’s Woodyard mud volcano lies the village of Piparo which is a site of a bizarre, hugely destructive mud volcano eruption that took place on February 22, 1997. It lies inactive since then, and the remnants of destroyed houses, roads to nowhere, and general mayhem have been cleared out as well. Only the mud volcano remains at the site.

Travel tip: – Skip this place. You will be disappointed! 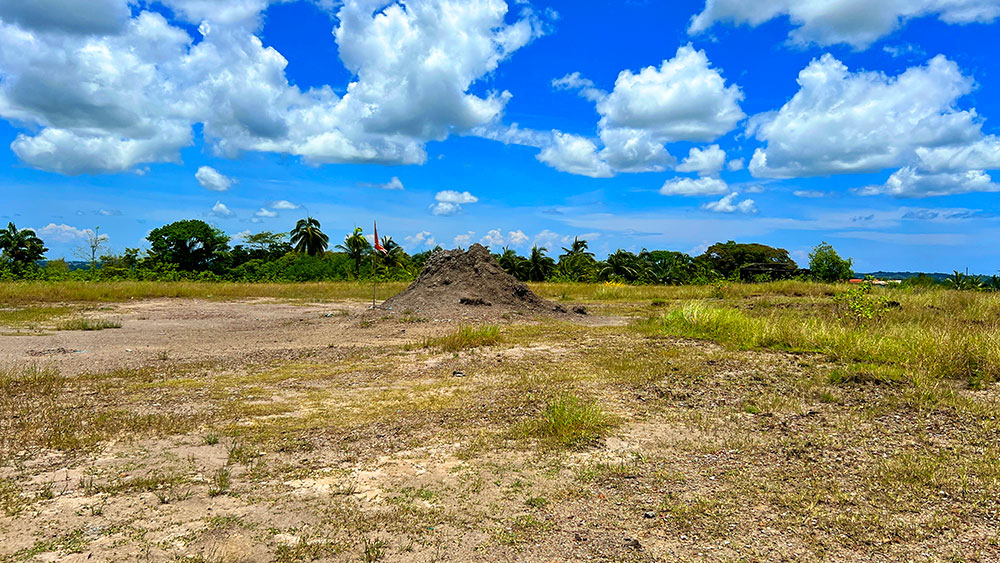 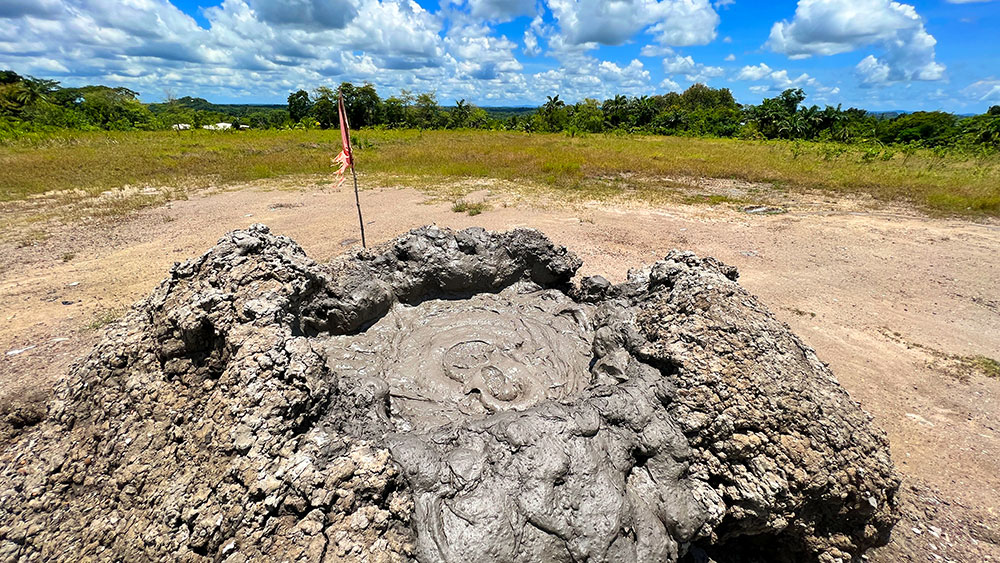 About an hours drive from Piparo Mud Volcano, at the south-western point of Trinidad island is this UNESCO World Heritage site. It is the largest commercial deposit of natural asphalt in the world – one of only three in known existence – and holds approximately 10 million tons of asphalt.

The lake appears like a huge oval-shaped car park, but on closer inspection, it looks like very dark clay, with rough undulating patches. Its asphalt has been used to pave roads and airport runways around the world. You can walk on the surface and with all the hissing sounds it seems to be alive! Small pools of water form on it during the rainy season and you can bathe in them. They contain high levels of sulfur and villagers claim they are the fountains of life, good for curing anything from skin conditions to joint pain. 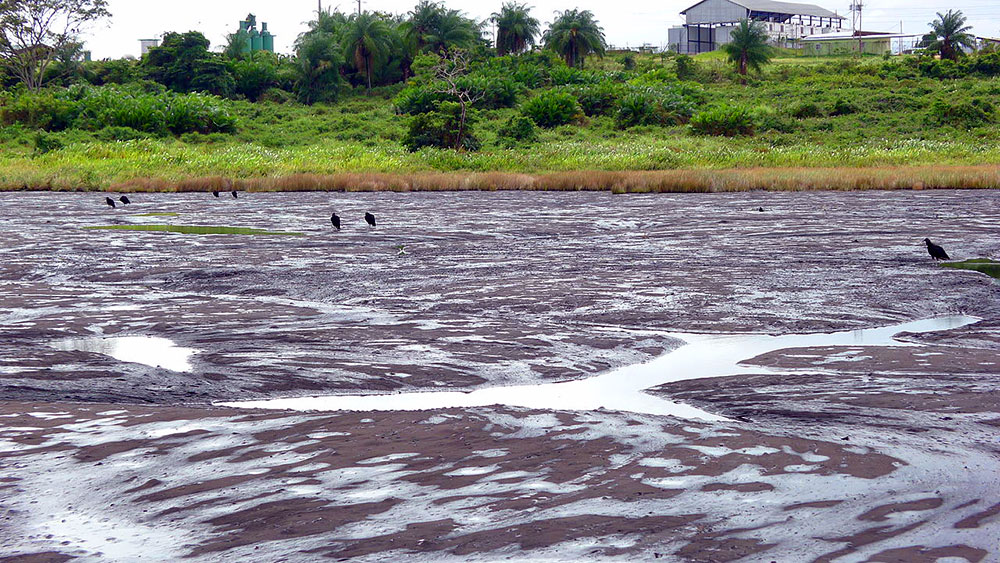 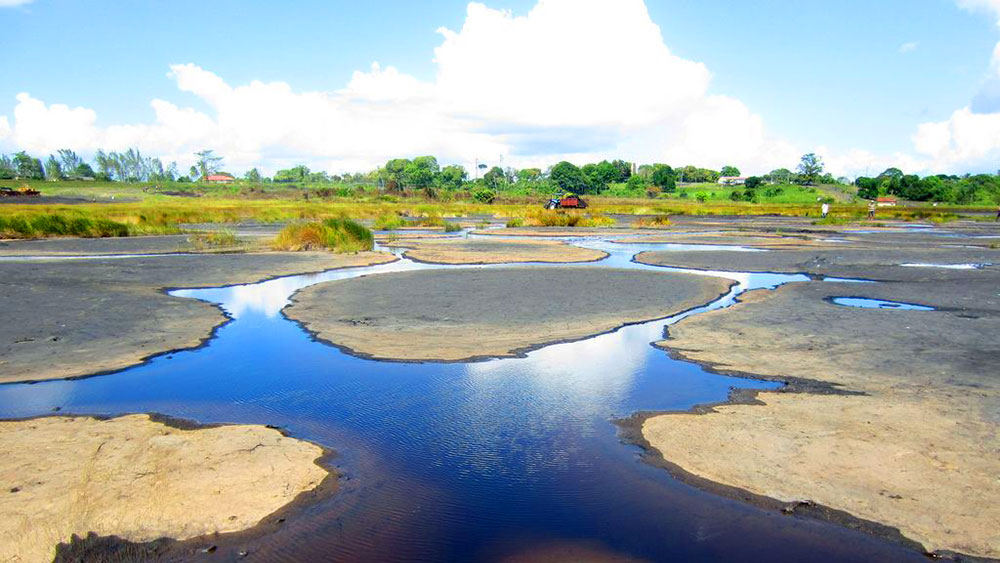 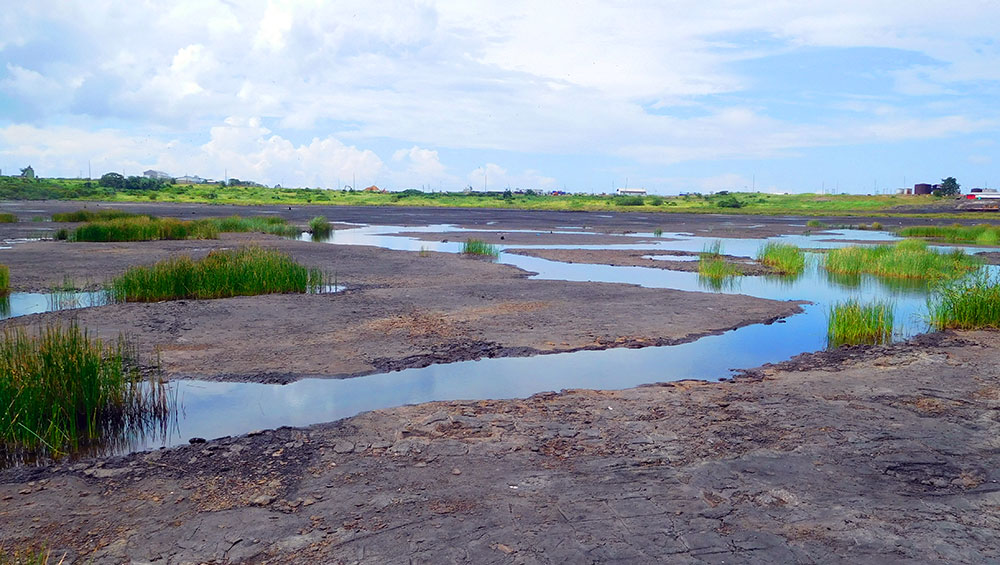 Driving up north from here, we had booked a tour of the Caroni Bird Sanctuary that starts at 4pm. The tour is about 5 hours and takes you in a boat through the marshes, followed by the lakes to see one of the most spectacular events in wildlife – the gathering of Scarlet Ibis birds during sunset. Thousands of these orange birds descent on the island-mountains of the marshes to nest for the night.

Travel tip: – Do not miss this tour. It’s a wildlife spectacle! Bring good binoculars and high-zoom lenses for your cameras for the best experience. 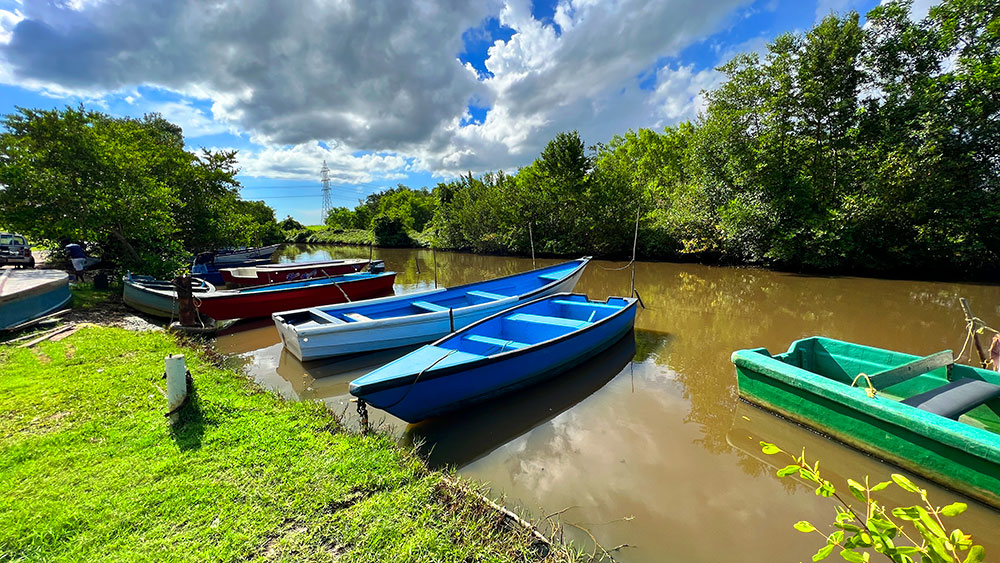 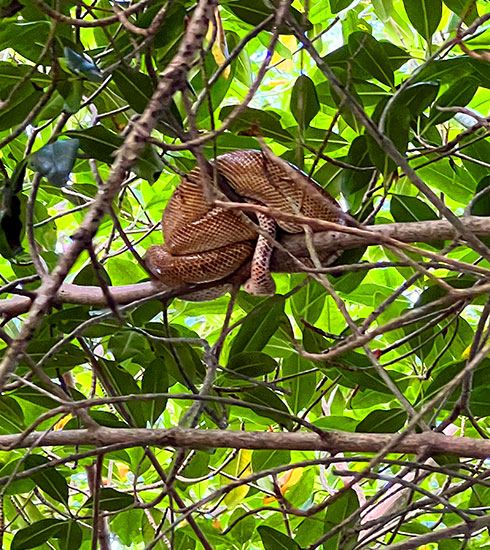 [Snake on a tree at Caroni Bird Sanctuary tour] 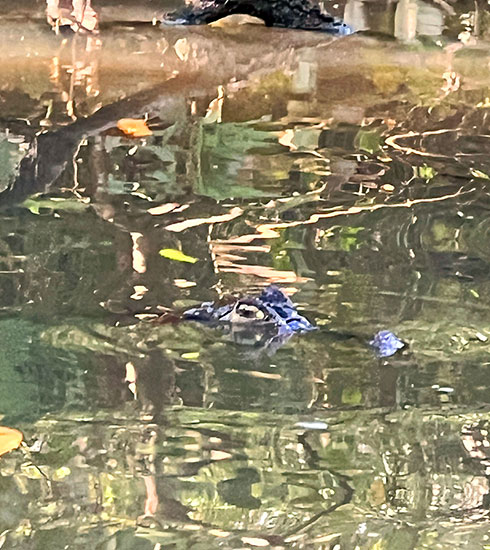 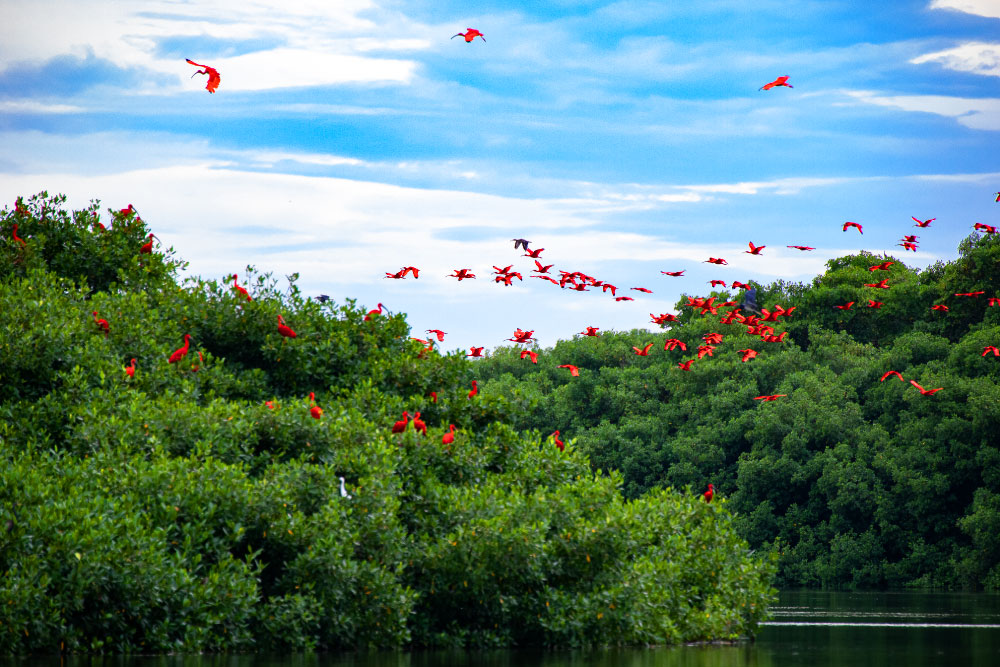 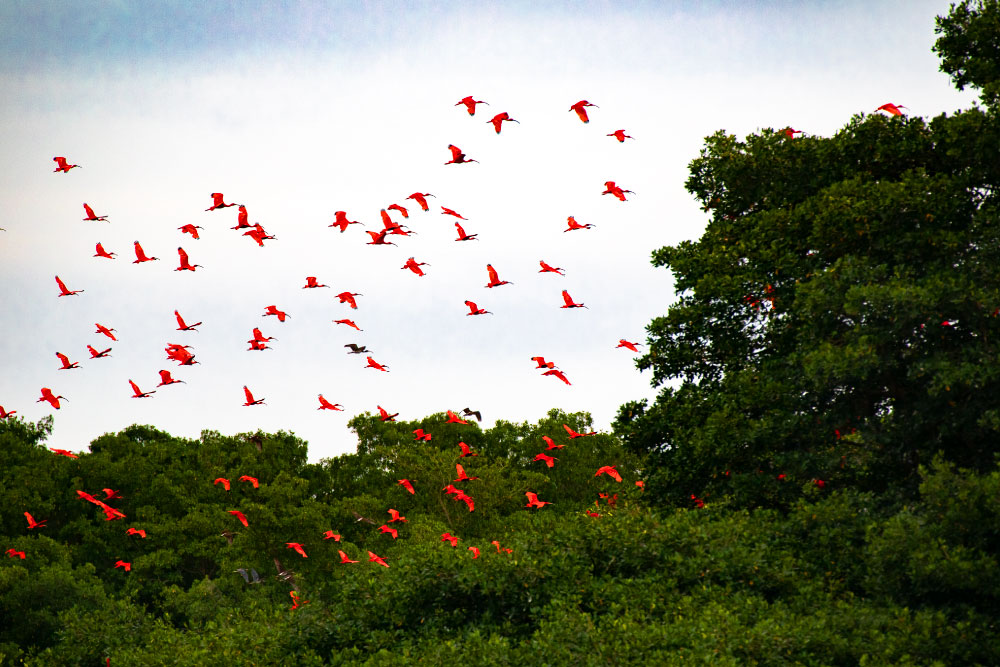 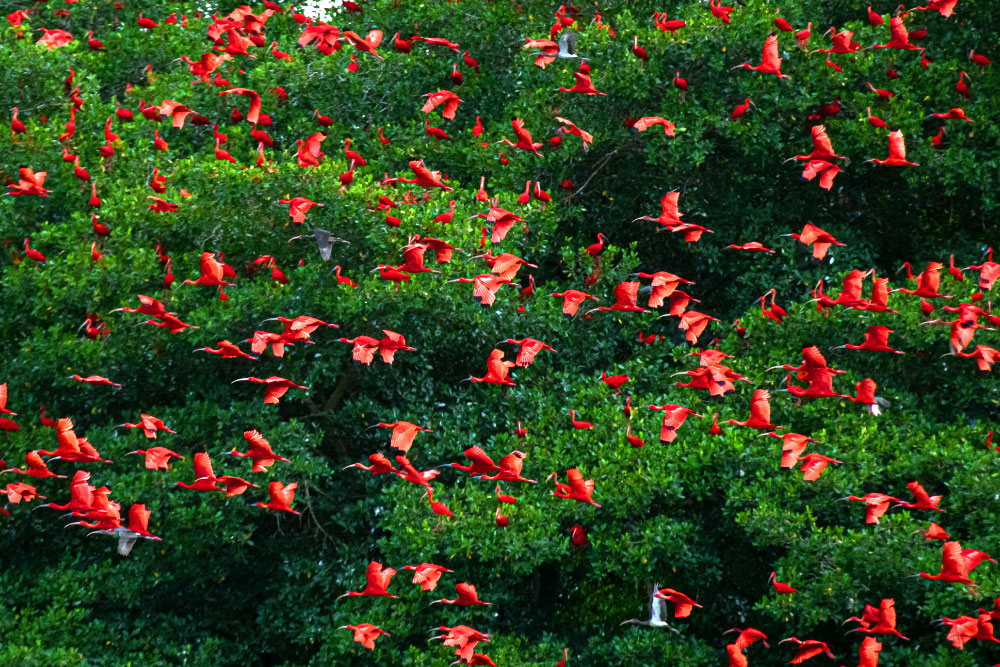 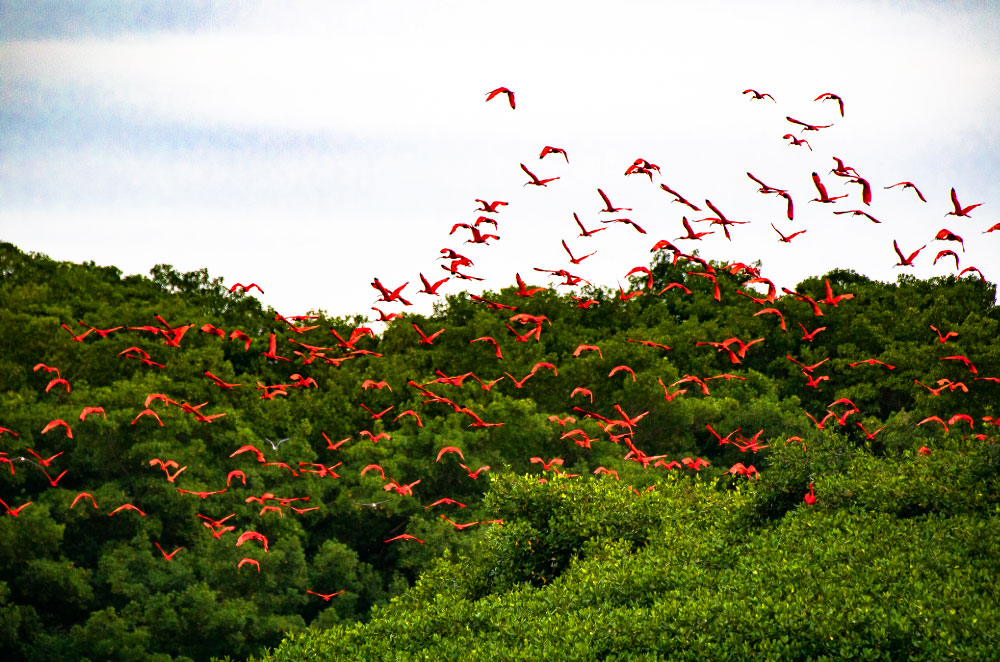 It was past dusk after the tour so we headed back to the hotel in Port of Spain, ordered dinner from a nearby restaurant and called it a night.

Tips, information and planning for the sixteen days around the Caribbean island nations.