The southern area of this country is Herzegovina, with Mostar as its provincial capital, but there are some spectacular villages and sights to experience in Herzegovina. Today we started early from Mostar to visit some of them on a day trip. 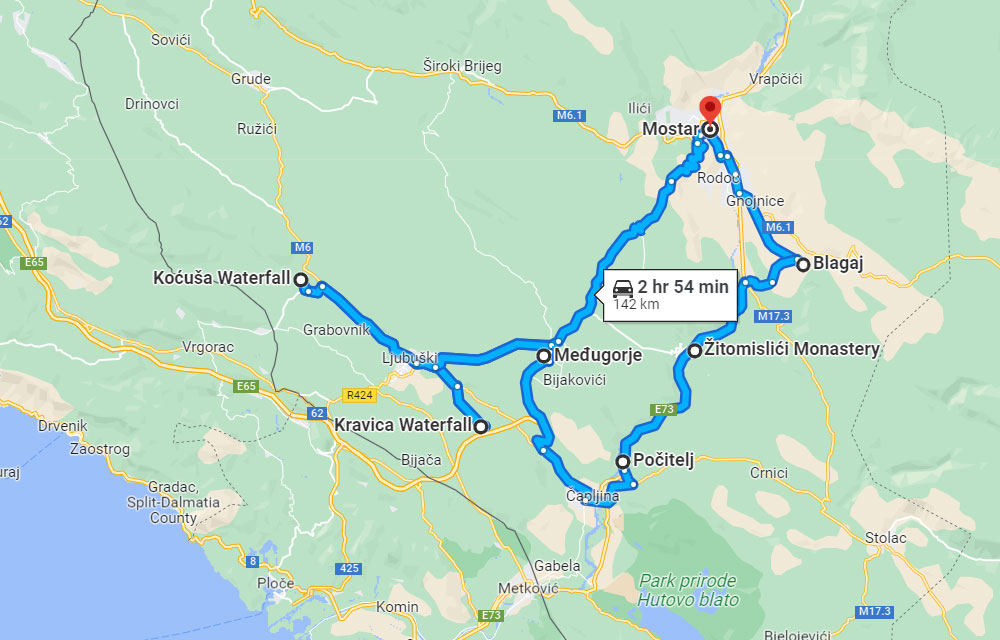 About 13km from Mostar is Blagaj, well-known for the Dervish House – Blagaj Tekija, which is a Dervish monastery that’s nearly 600 years old. Situated at the base of a cliff, next to the source of the river Buna, it’s a unique and picturesque series of buildings that looks even better in person than it does in pictures.

The Tekija (or Tekke) was first founded during the height of the Ottoman empire. Time and rock slides have led to extensive repairs and reconstruction to the buildings. Today, thanks largely to a Turkish travel agency, the Tekke looks mostly as it did in the past. You can visit the monastery inside (entrance fee is BAM 10) and view the rooms of where and how the dervish would practice. 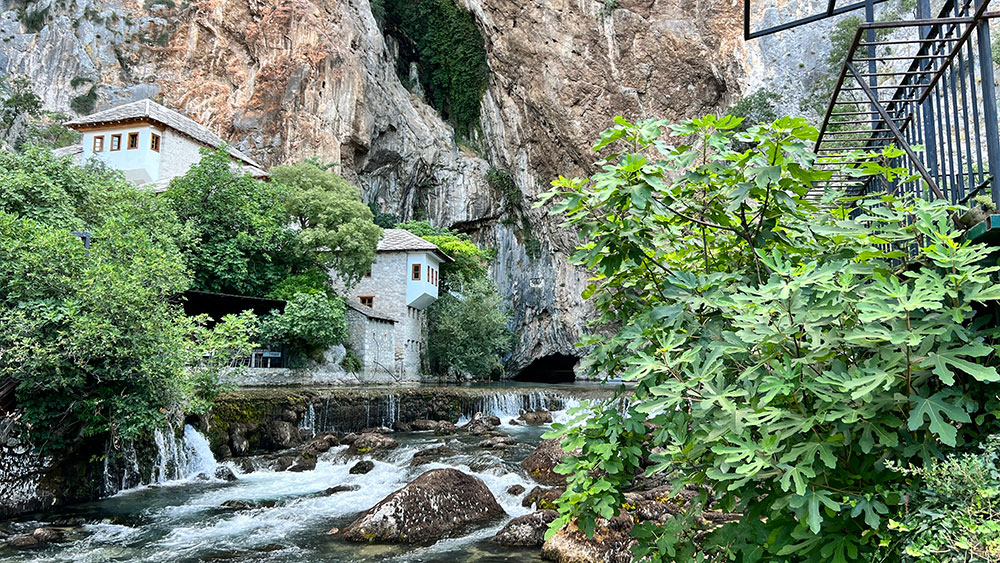 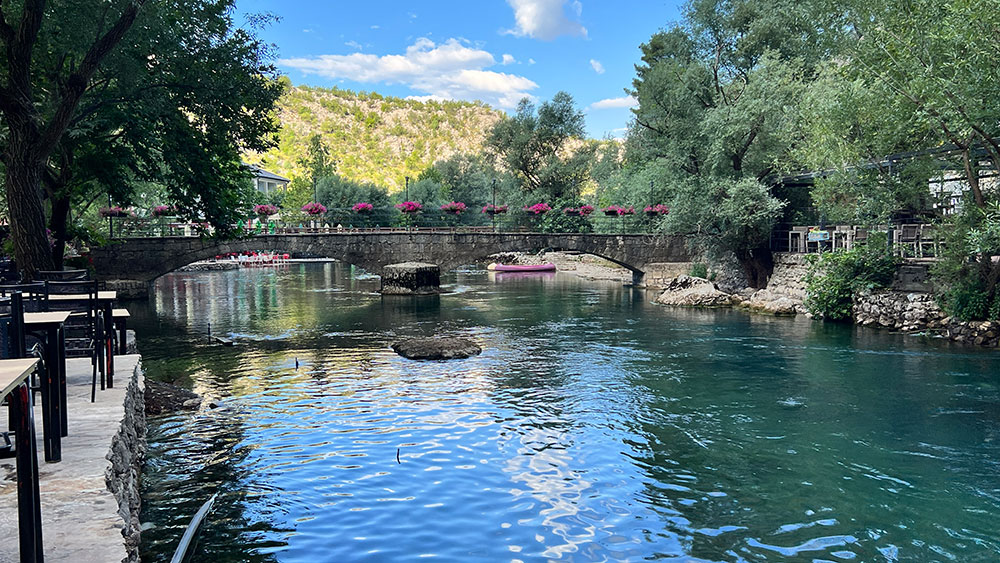 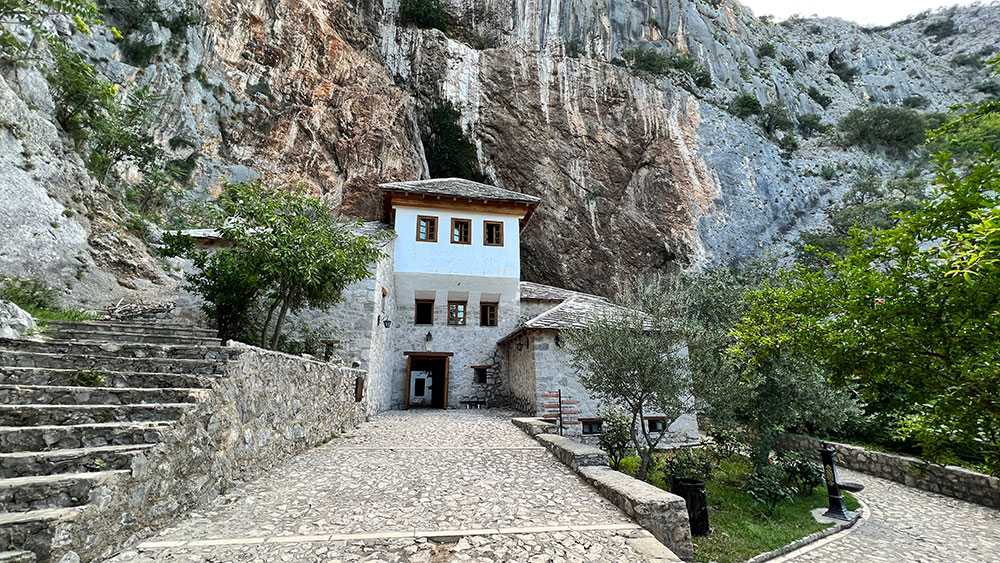 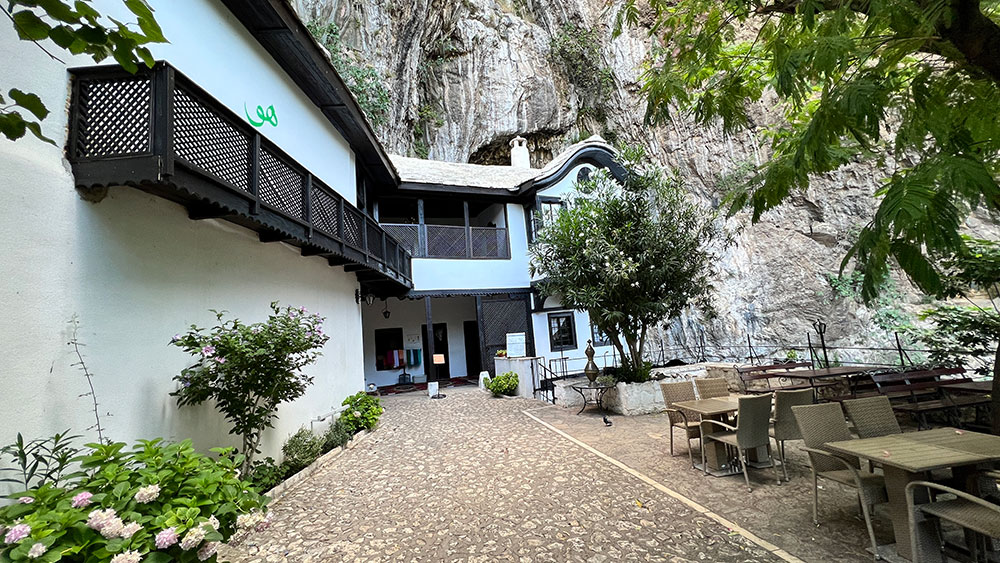 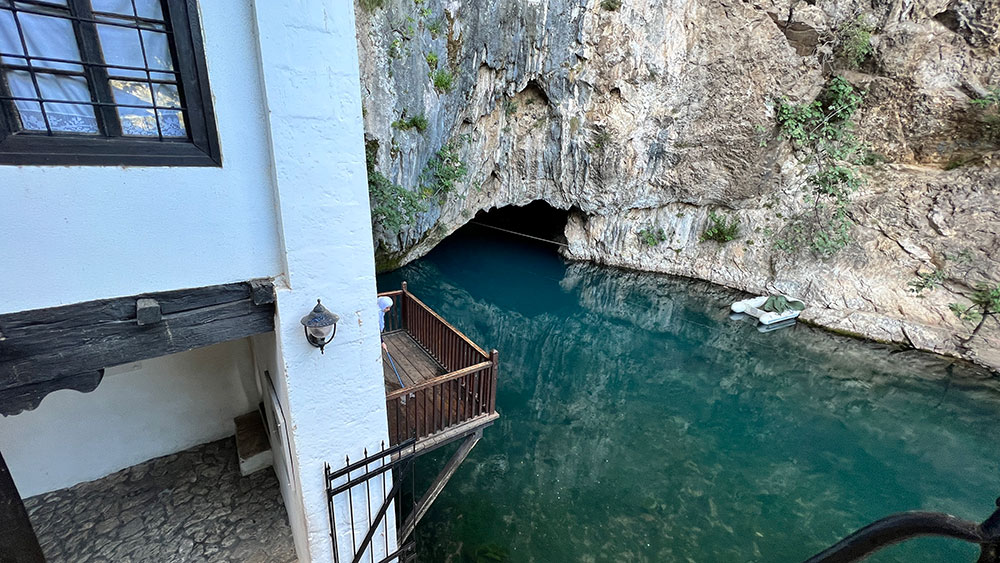 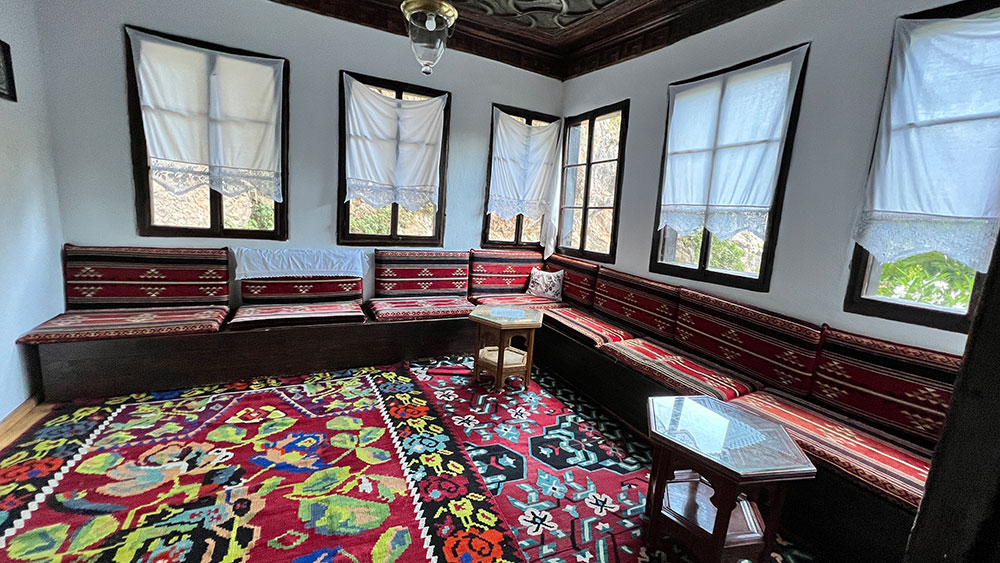 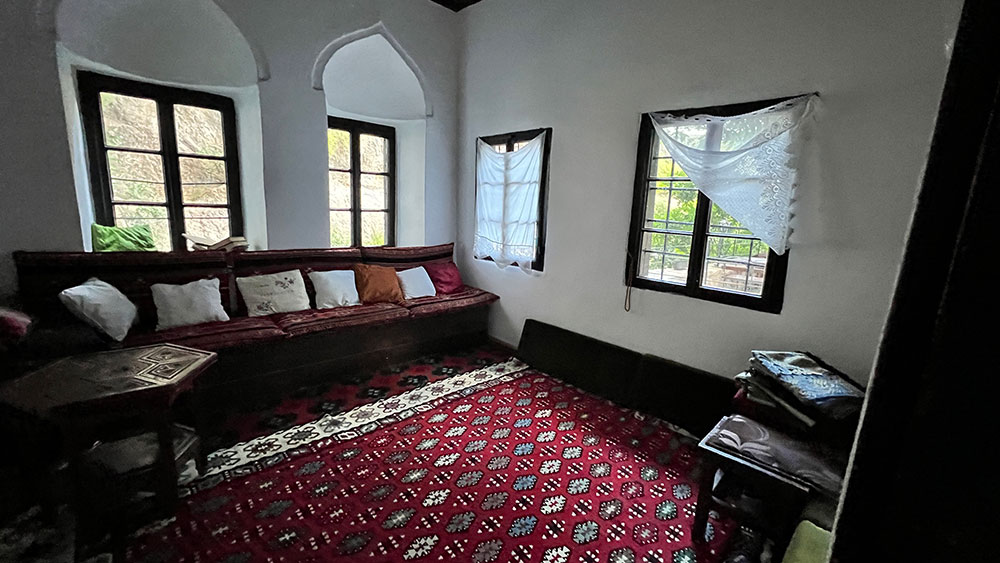 Next stop, a few kilometers away from Blagaj is Žitomislići Monastery – a Serbian Orthodox monastery dedicated to the Annunciation of the Most Holy Mother of God. You can visit inside only by appointments, and we could not get any appointments for that day. 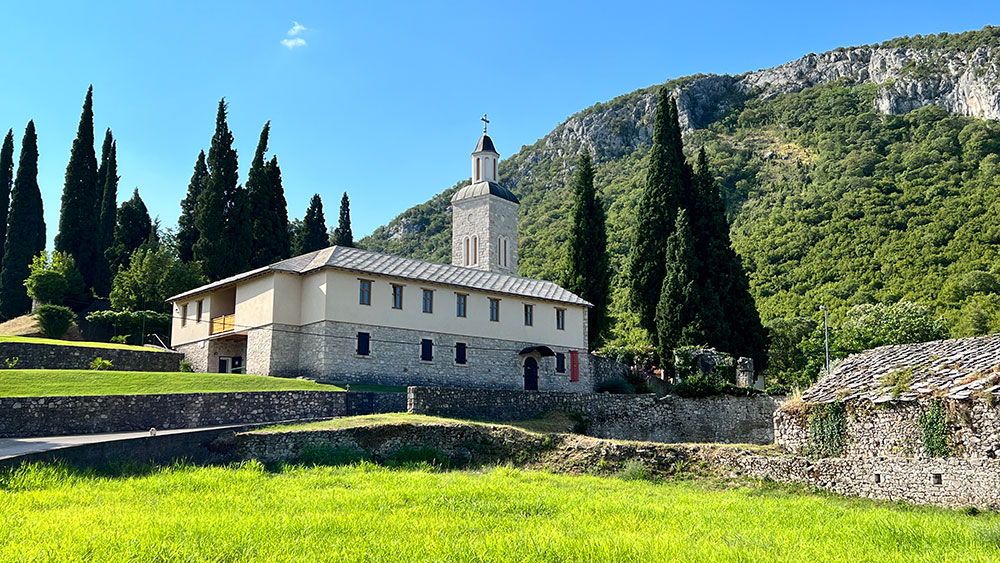 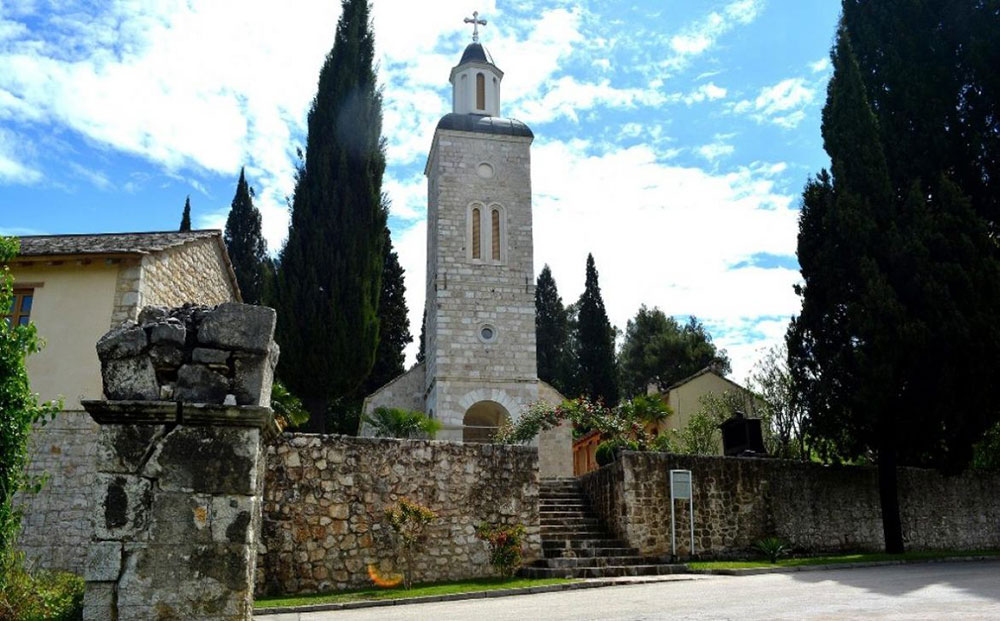 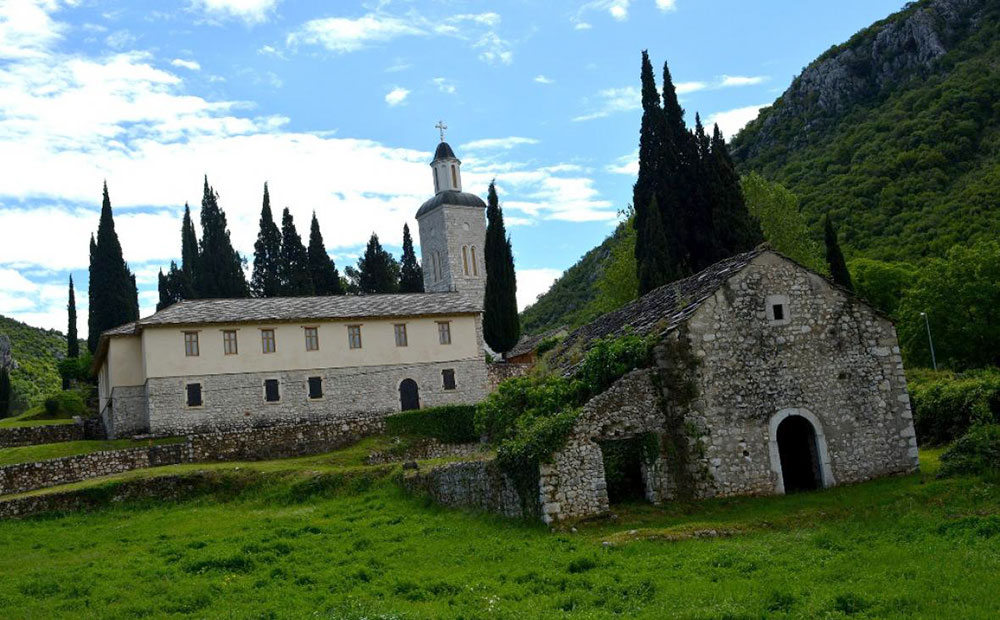 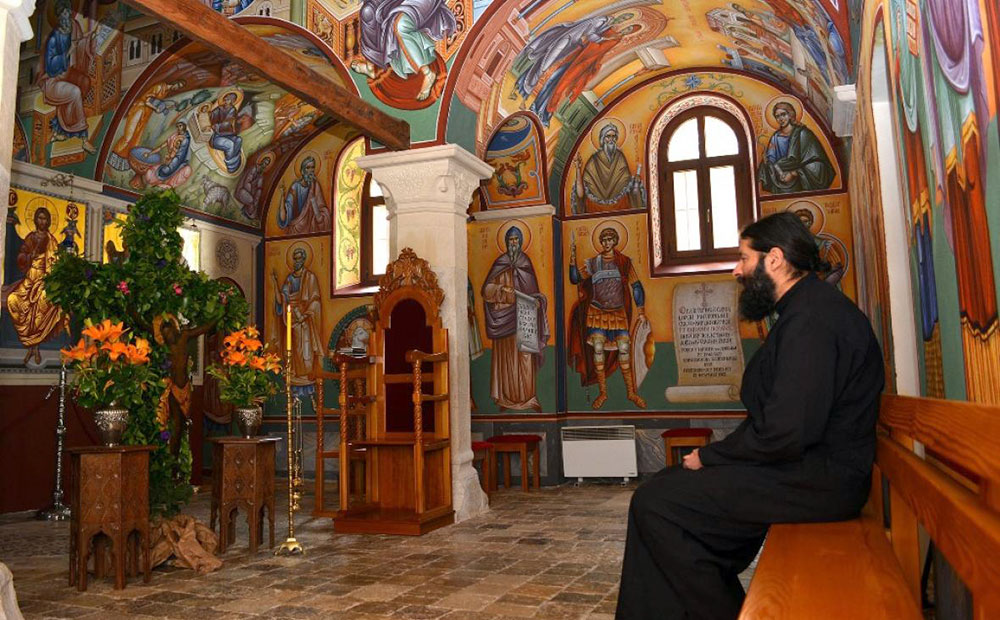 Driving further south on the same road brings us to the grey-washed but beautiful tiny village of Počitelj. With total inhabitants of less than 900, this has become a major tourist attraction because of its perched-up-the-hill houses and sweeping views over the rocky mountains and deep river valley. The fort of Počitelj was built between the fifteenth and eighteenth centuries and the best view of this village are from up here. This village is also considered for a UNESCO World Heritage site.

You can park your car outside the walls, on the highway or at the Han restaurant inside the walls. From here it’s a 10-15 min easy hike up to the fort, which is open 24/7. The views of Hadži Alija mosque and Sahat-Kula (Clock Tower) from the hike up are stunning. You can also climb the steep circular staircase of the Fort tower for spectacular aerial view of the whole area!

Pro-tip: Visit this village as early in the morning as possible, because past 9am the hoards of tourist buses stop here and the place gets really busy! 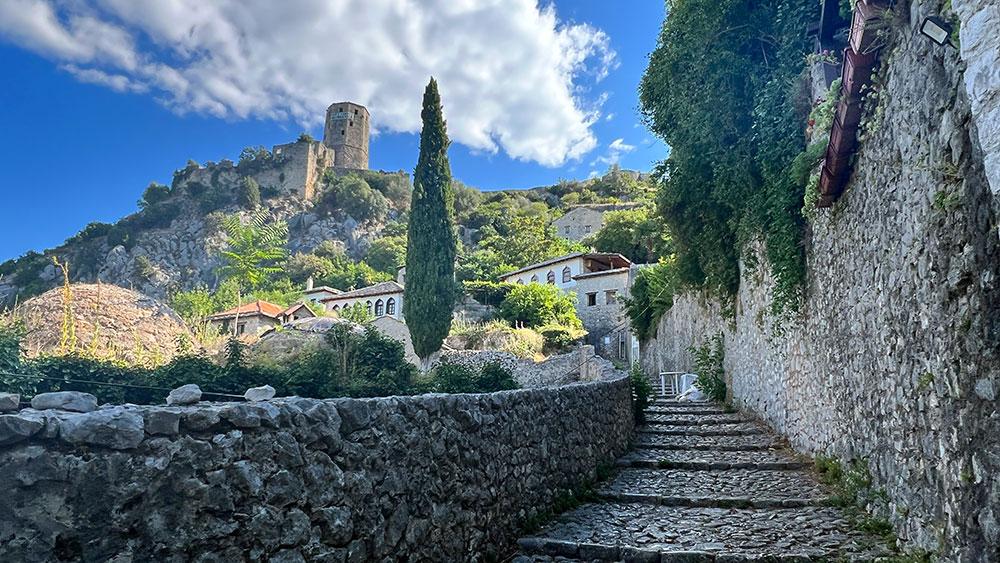 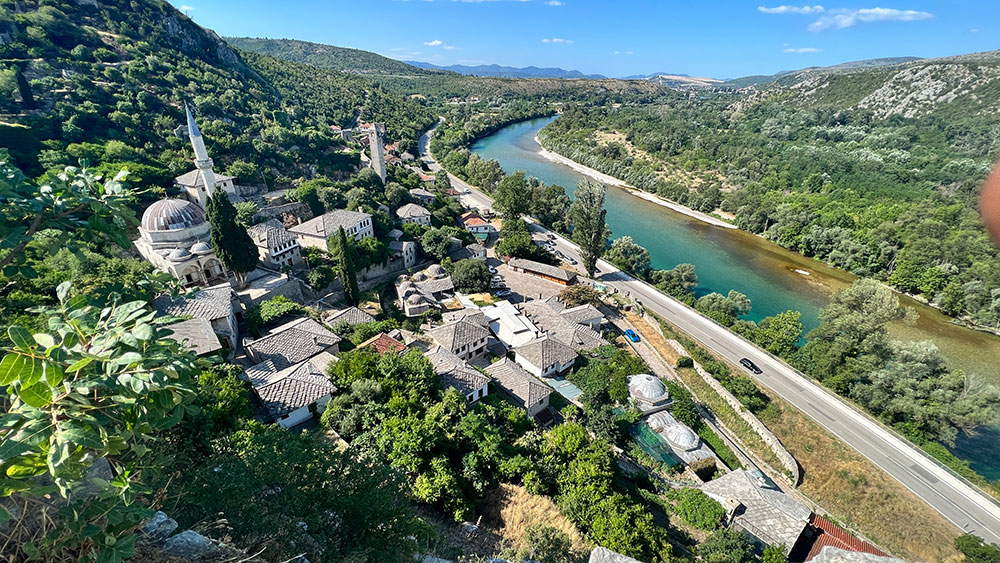 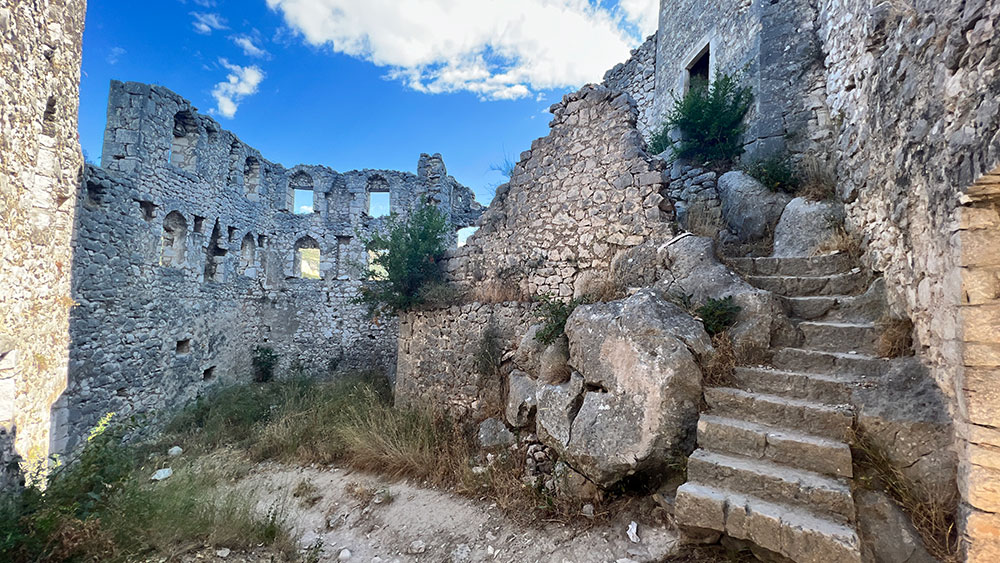 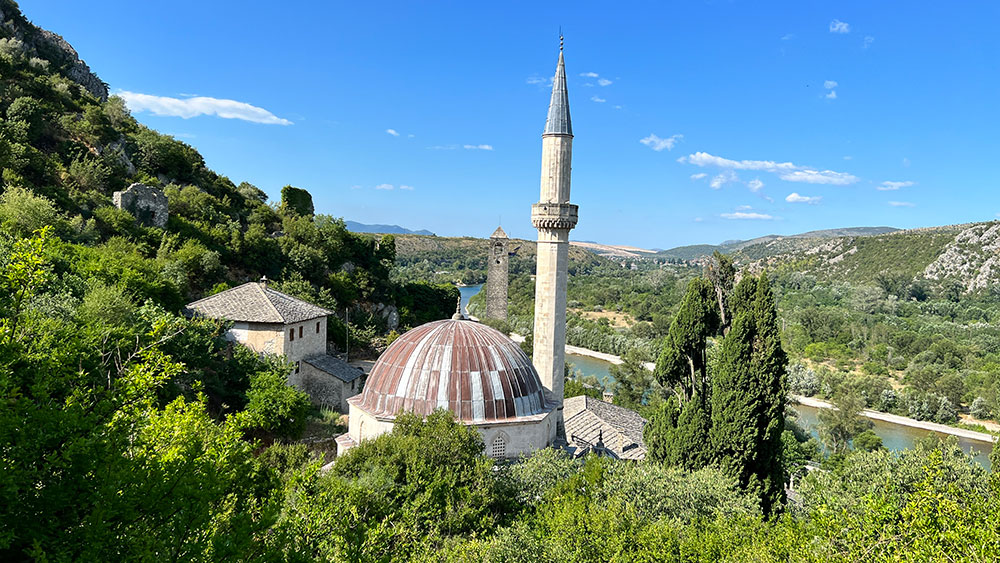 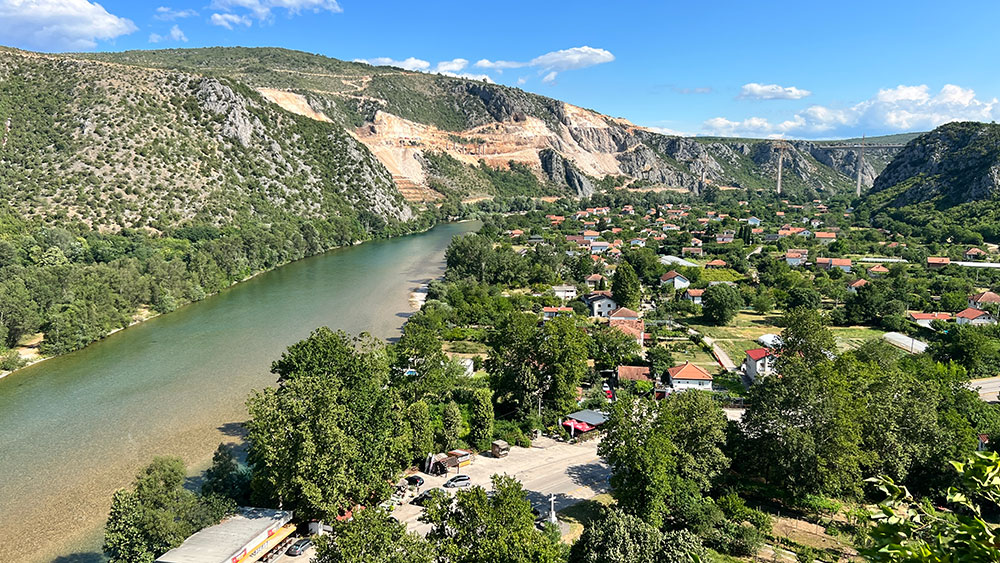 About 22km driving north from here is the small town of Međugorje – well-known for its Church of Saint James and Statue of Risen Christ.

Ever since 1981, when six teenagers reported that they had seen an apparition of the Blessed Virgin Mary, Queen of Peace, in the hills between here and the village of Bijakovići, this sleepy Herzegovinian town has become the second-largest Catholic pilgrimage site in the world. There has been much controversy over the legitimacy of the visions, but in May 2019 the Vatican finally recognized it as an official pilgrimage site. 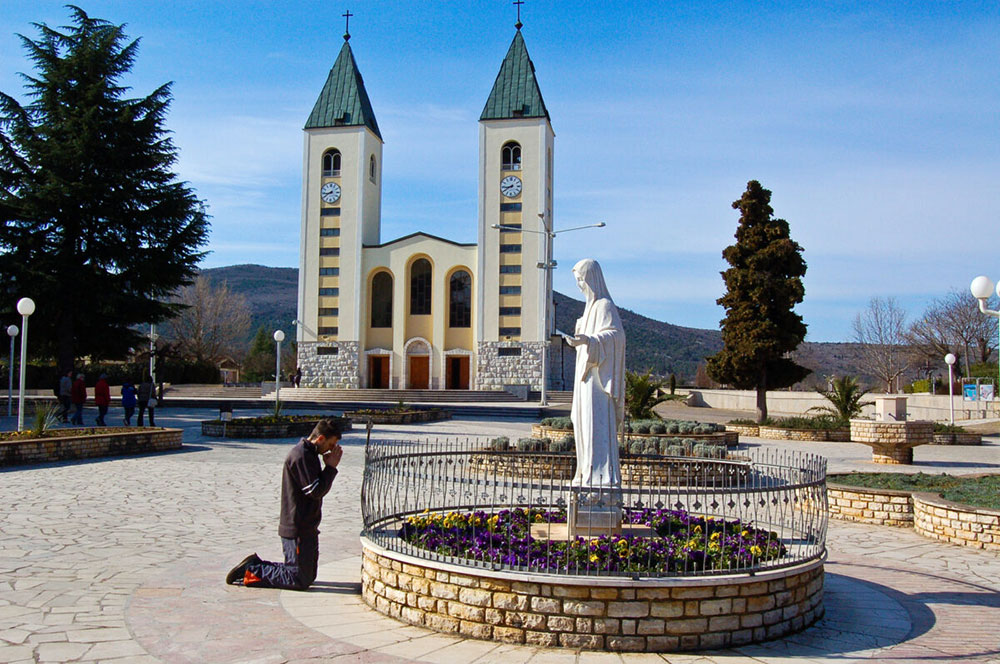 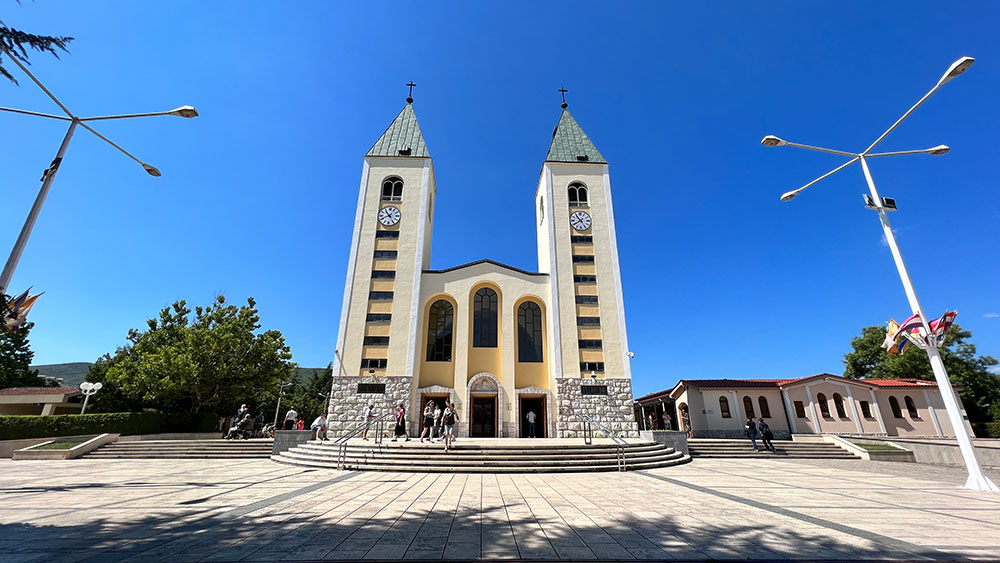 Risen Christ Saviour is a sculpture by Slovenian artist Andrej Ajdic which has been placed for Easter 1998 at south of church in front of path that brings to local cemetery.

Sculpture has been called Risen Christ but real intention of artist was to alloy together “Cross” with “Rising Christ”. Looking at Risen Christ, it shows that he is not on crucifix but he is traced, he rises and stands up with body footprint left on the ground.

For some time, leaks appeared from the right knee of this sculpture continuously liquid, which were similar to tears and did not evaporate or froze. From a scientific perspective, the liquid that come from statue is water 99 percent, and contains traces of calcium, iron, potassium, magnesium, sodium, sulphur and zinc. About half of the structure is empty inside and as bronze shows micro cracks and the drops of tears are because of air exchanges. 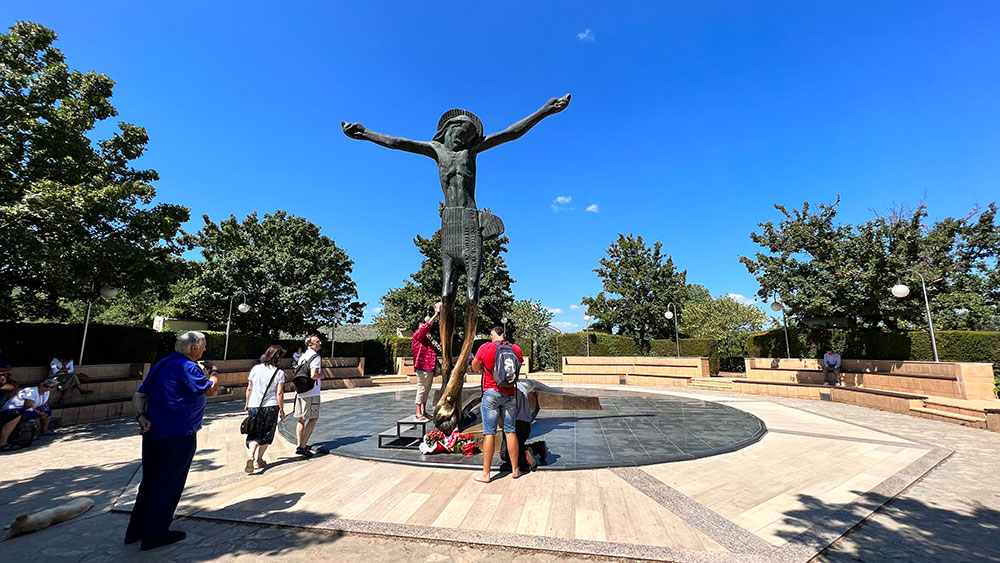 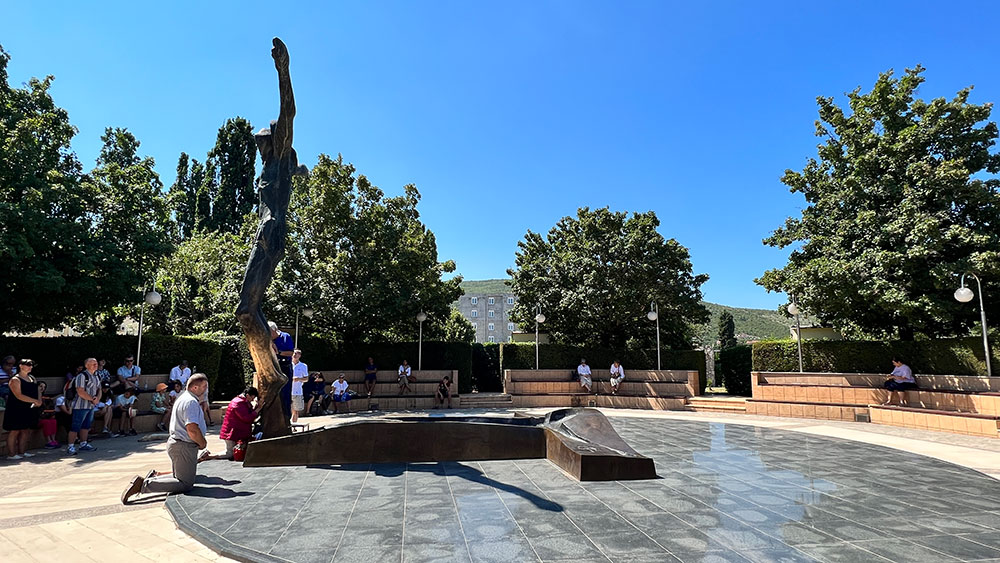 A quick 19km drive from Međugorje is one of the most visited place in Herzegovina – Kraviva waterfalls. This natural park has been called mini Iguazu, with emphasis in “mini”. The large tufa cascade on the Trebižat River has a height of about 25 meters and the radius of the lake in the base of the waterfall of 120 meters.

Incredibly popular with locals, tourists from Croatia and travelers road tripping the Balkans, it’s a visual treat to see these waterfalls, but the tourists and commercialization has added restaurants and bars, beach chairs for tanning, and a boat ride in this mini-lake! Expect a hoard of crowd, even early morning! 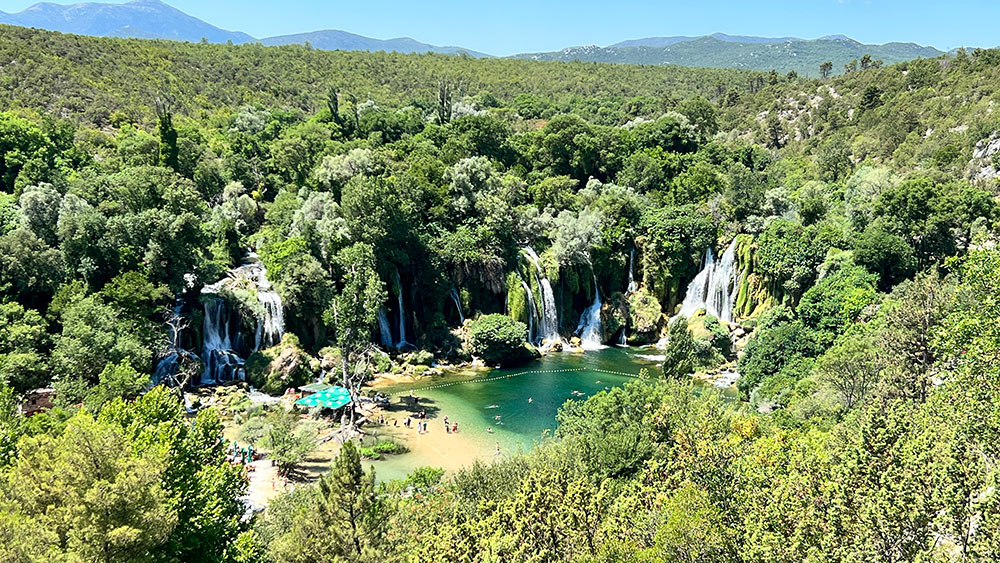 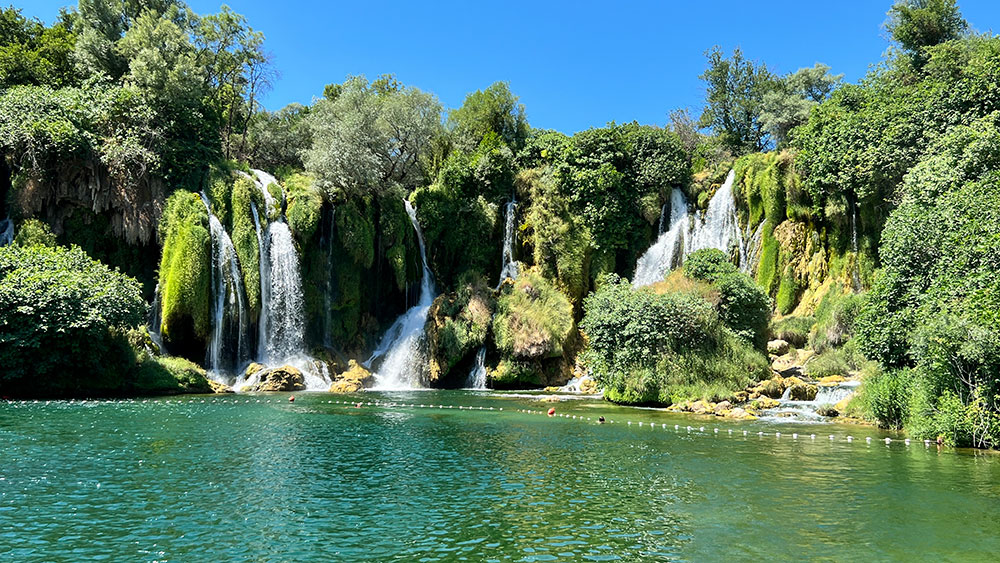 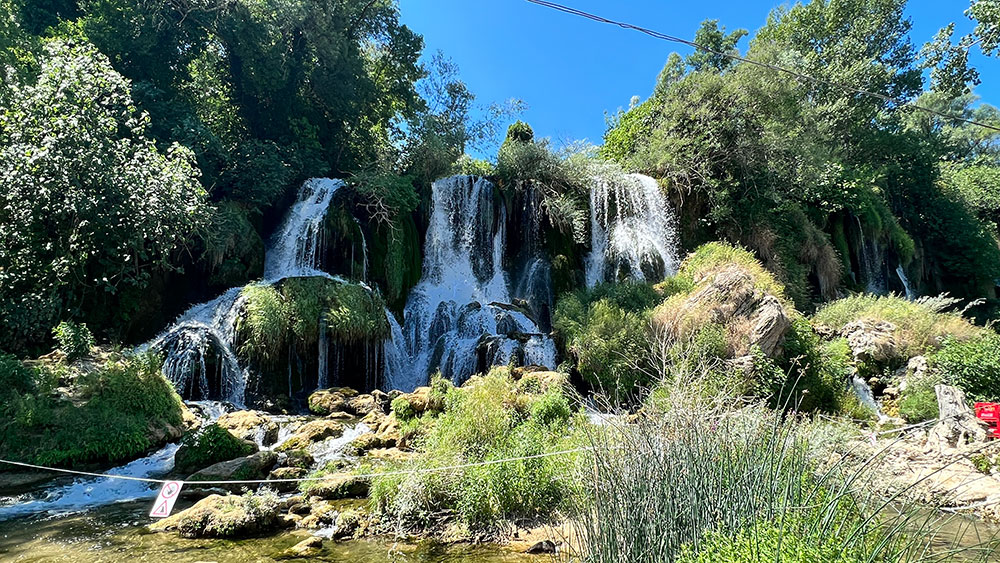 Last stop for the day was a 18km drive from Kravica waterfalls to this mini-version called Koćuša Waterfalls. It’s located next to a nice restaurant and is more quiet compared to Kravica. Would we go there if we were to do again? Probably not worth the drive! 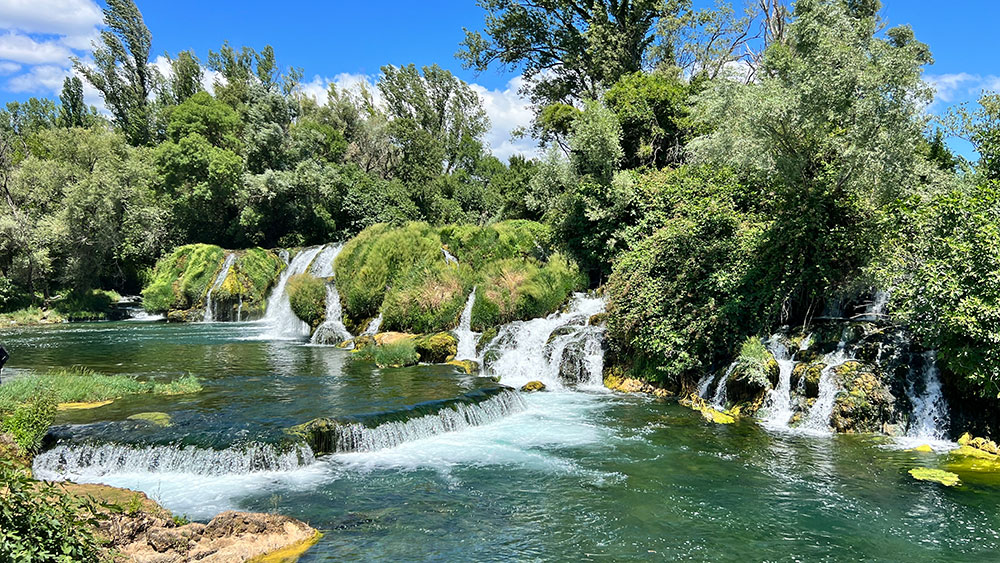 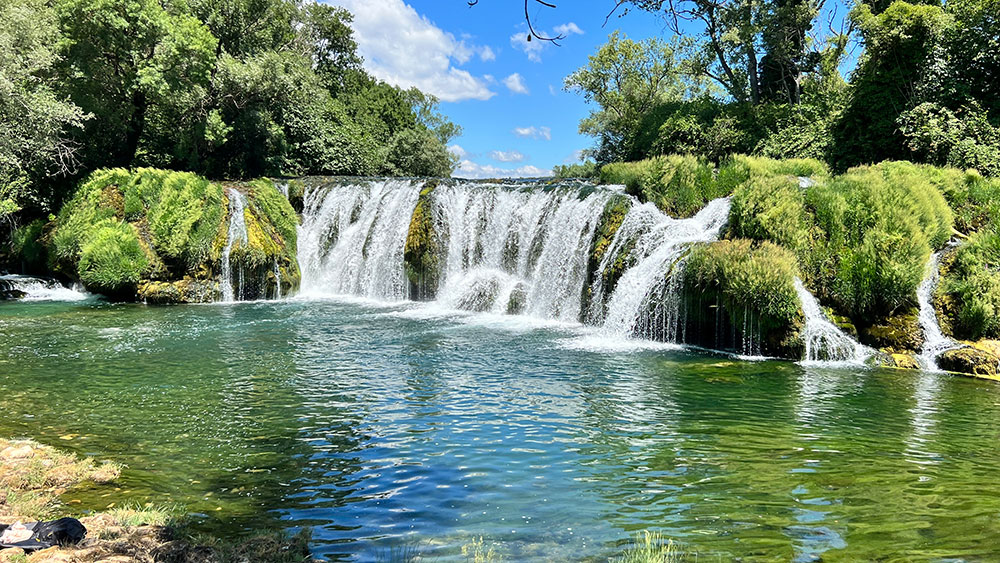 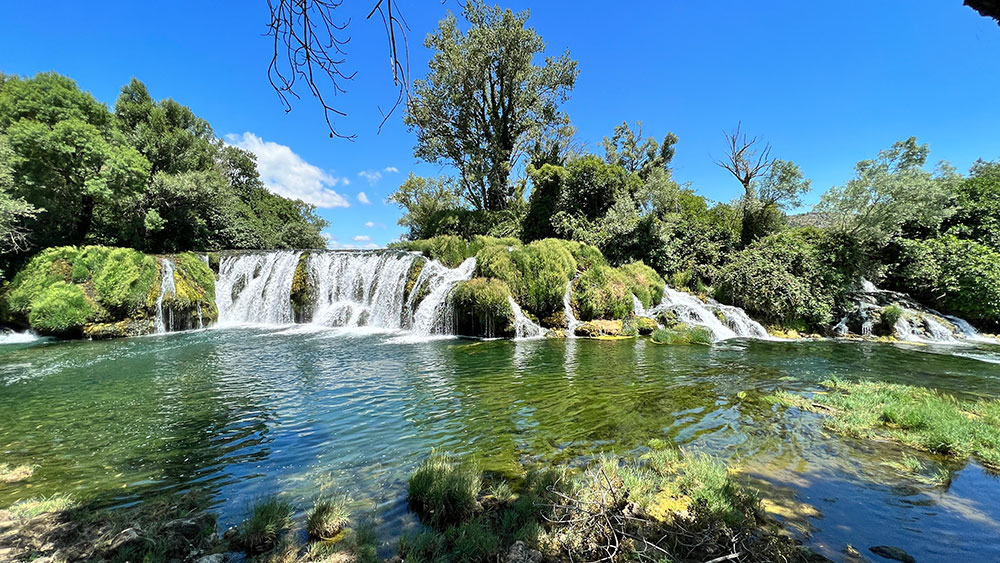 After a full day of driving around Herzegovina experiencing some of the best towns, villages and waterfalls, we headed back to Mostar for some rest, before heading out for dinner and calling it a day! 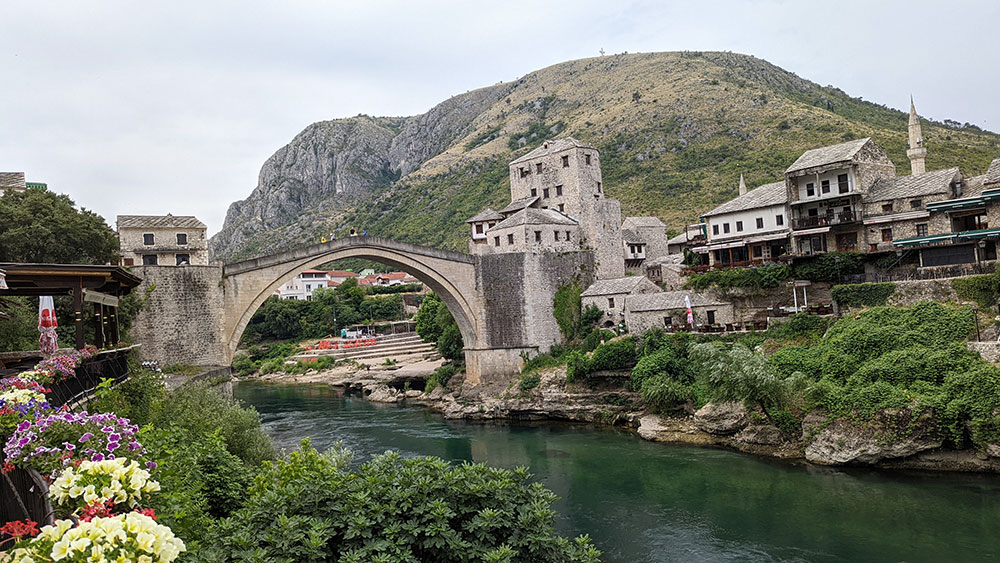