Having a rental car in Bosnia always helps reaching the small towns at your own pace. After breakfast at Fabrika Coffee (because they open early!), I headed out to the airport to pick up the rental car. And from the airport I started driving up north along the beautiful roads of Bosnia. 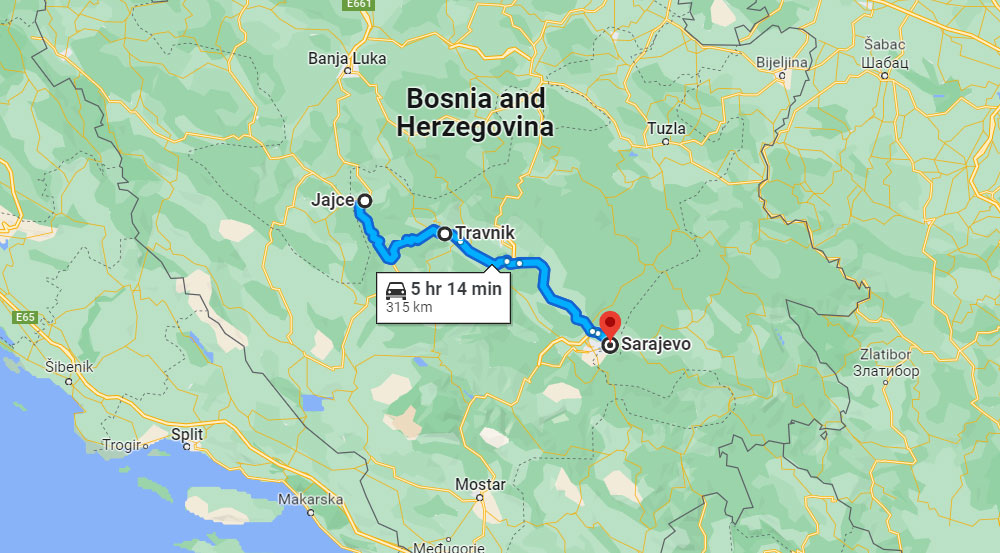 First stop of the day was the town of Travnik, about 92 km north from Sarajevo. Travni’s old city dates back to the early 15th century with many buildings originating from the Ottoman period such as mosques, oriental houses, clock towers, and street fountains. Travnik is the only town in Bosnia and Herzegovina to have two clock towers and fountains. 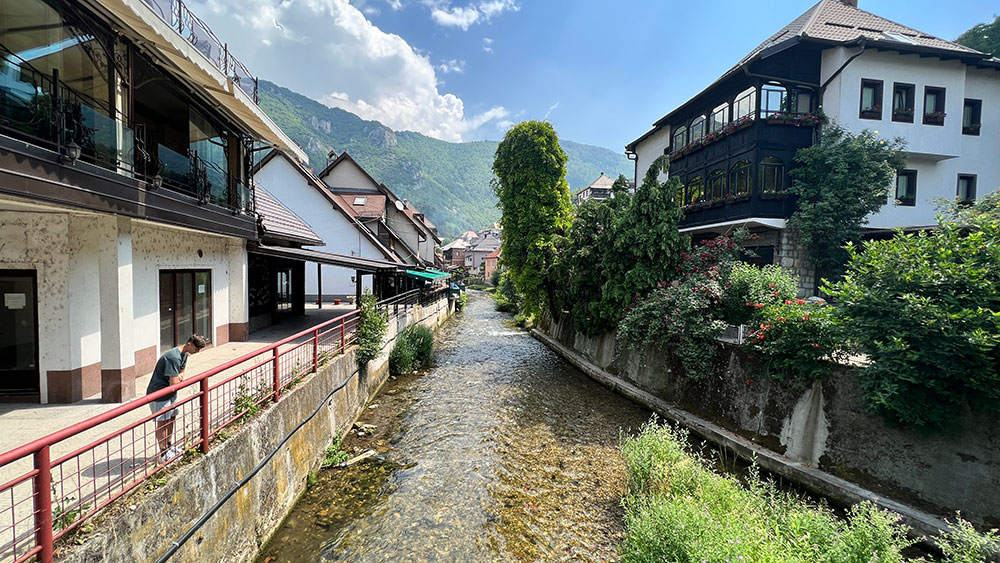 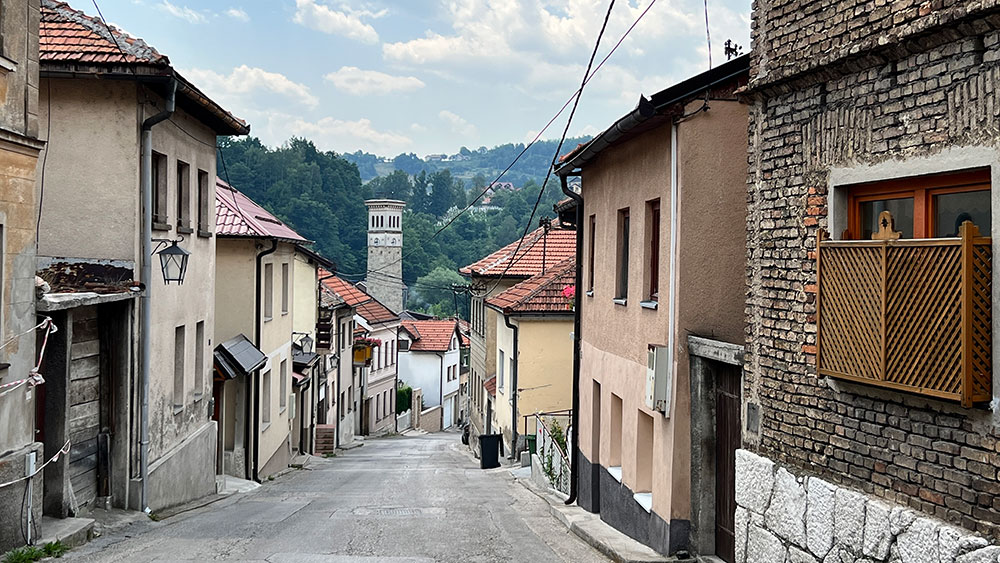 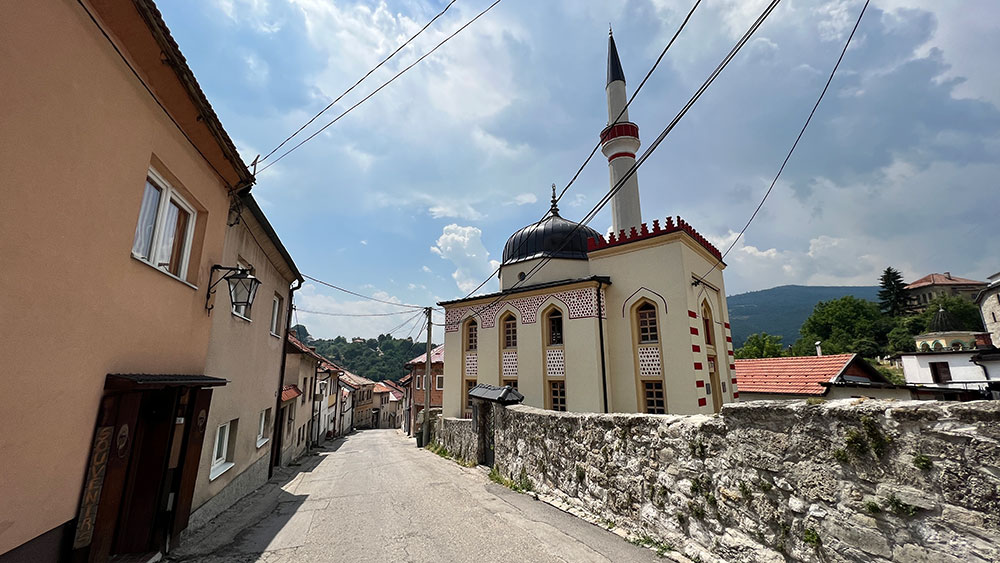 Parking in Travnik: There’s a parking lot next to Plava Voda that costs BAM 2 for 1 hour, paid to the attendant. The castle is a 10-minute walk from here.

This small town has two main sights to visit:
Plava Voda which is a large spring, initiating 350 meters long the eponymous river. The spring rises under the Vlašić mountain, just below Travnik Castle, in the center of the Old Town of Travnik. 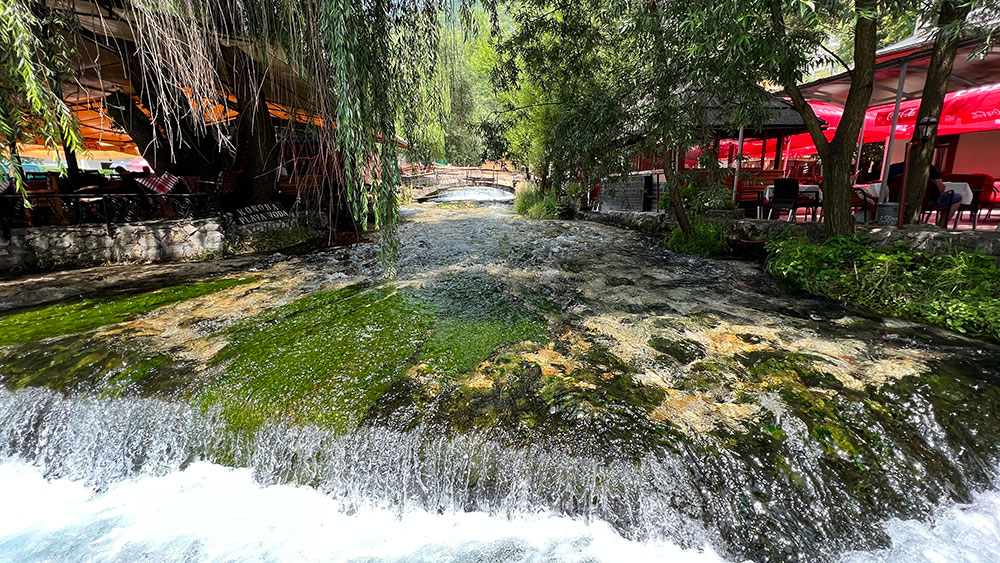 Tvrđava u Travniku (Travnik Castle) which is a medieval town-fortress complex built between the second half of the 14th century and the first half of the 15th century. 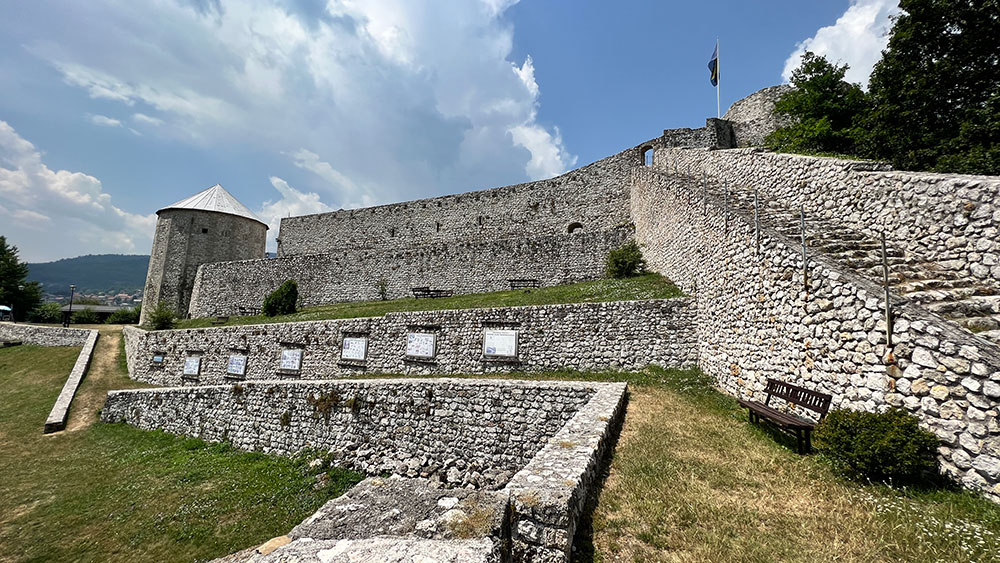 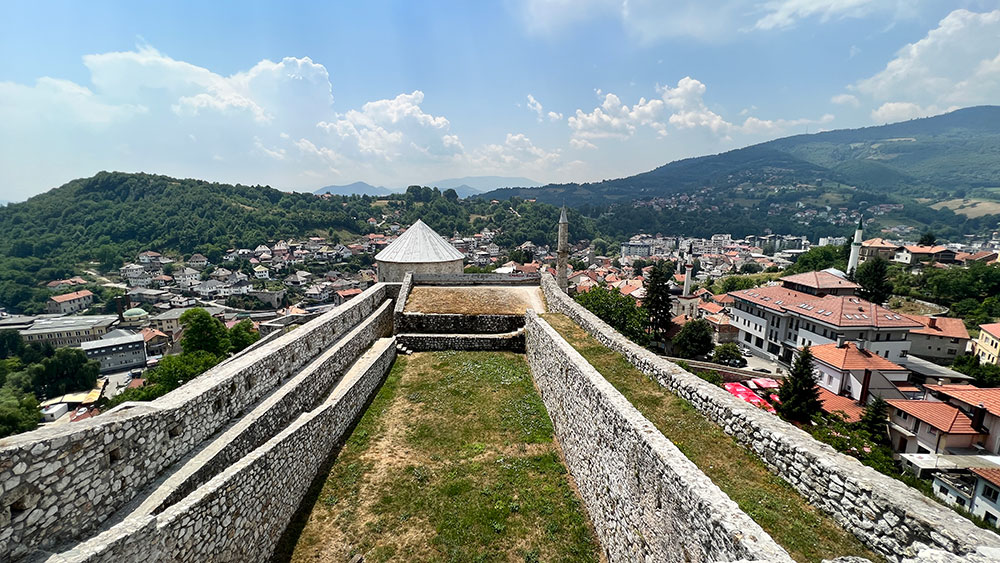 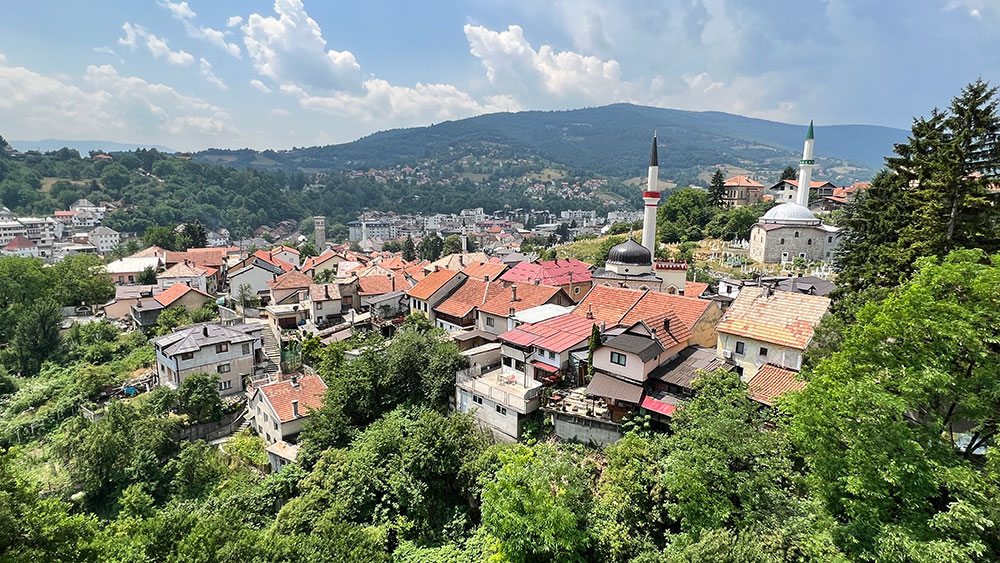 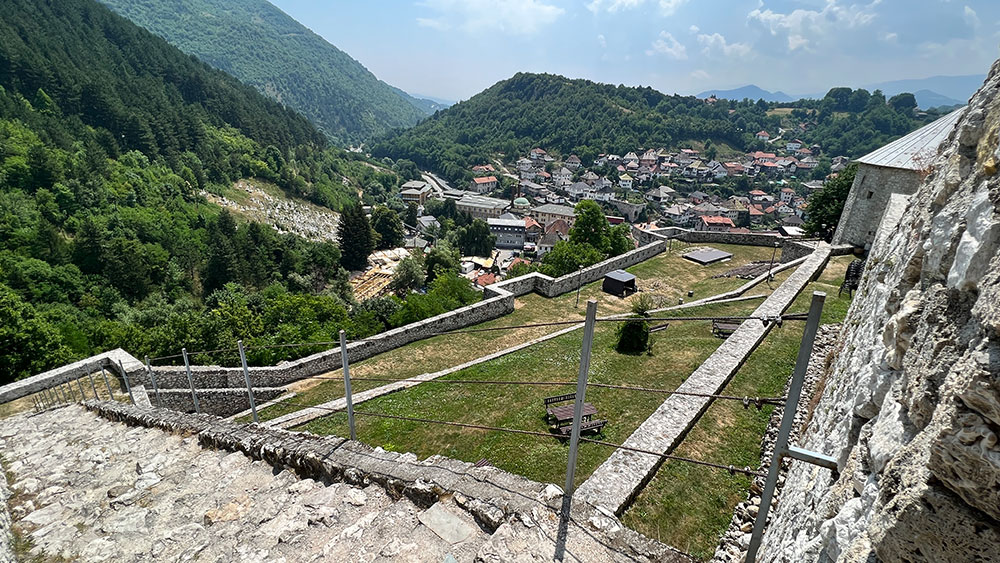 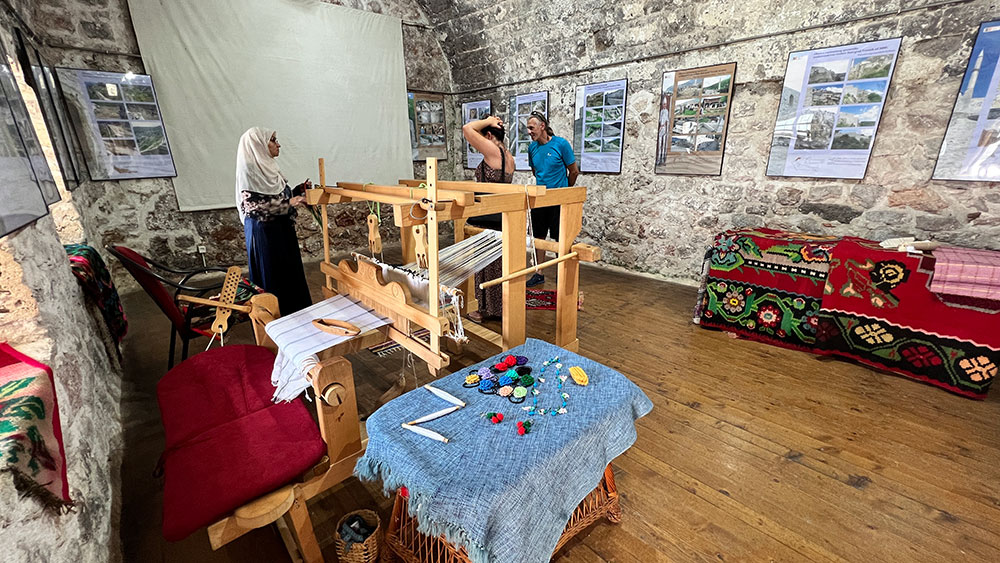 About 65km from Travnik lies this small town well-known for its German-speaking residents, and the only town in Bosnia where a waterfall flows in the center of the town.

Some of the sights of Jajce are:

Jajce Waterfall – This 17meter (55 feet) high waterfall is stunning and the highlight of this town. Located in the center and outside the walls of the fortified old town, Jajce waterfalls are accessible by paying BAM 8 as entrance fees and walking along a path leading to a platform right under the falls. 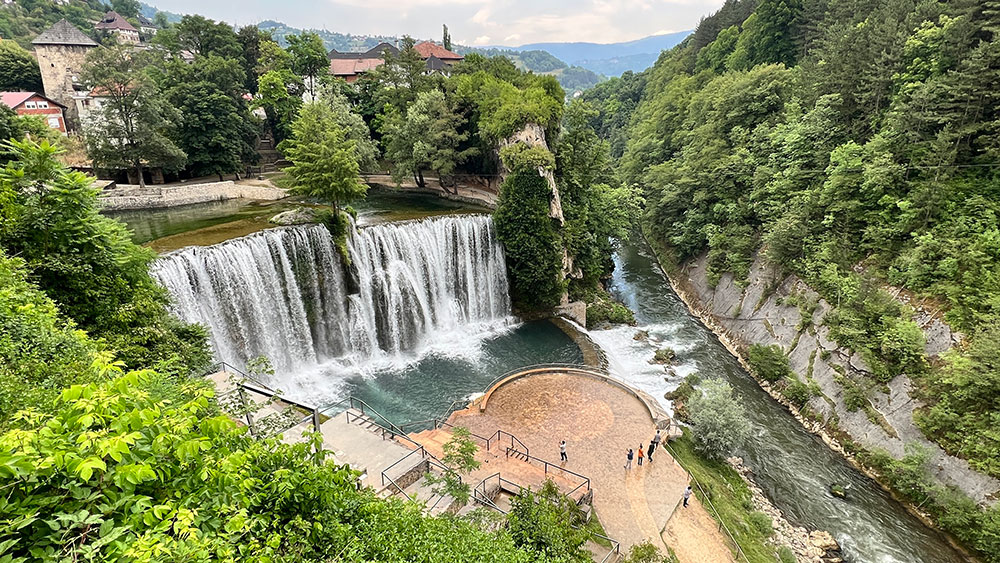 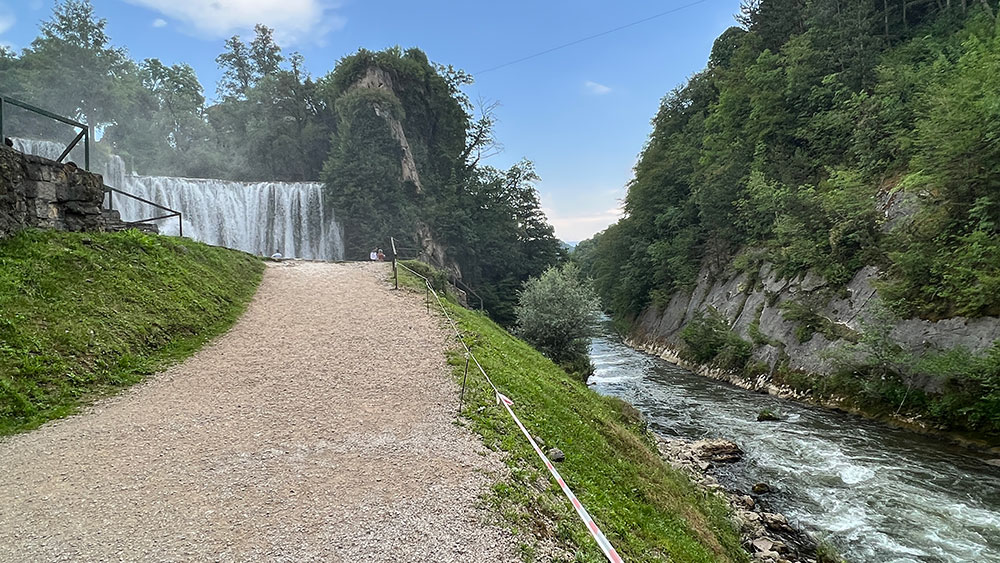 [Path leading to the platform at Jajce Waterfalls] 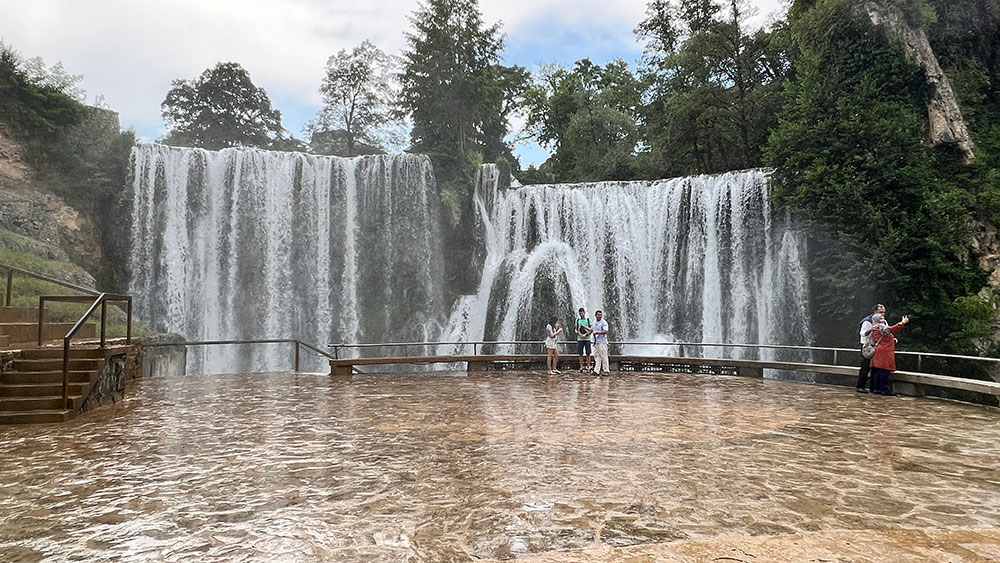 Jajce old town – A medieval fortified nucleus of Jajce, with Jajce Citadel high above town on top of pyramidal-shaped steep hill, is enclosed with approximately 1300 meters (4300 ft) long defensive walls. It is one of the best preserved fortified capitals of the Bosnian Kingdom, the last stronghold before the kingdom dissolved under the pressure of military advancement at the onset of Ottoman Empire takeover. 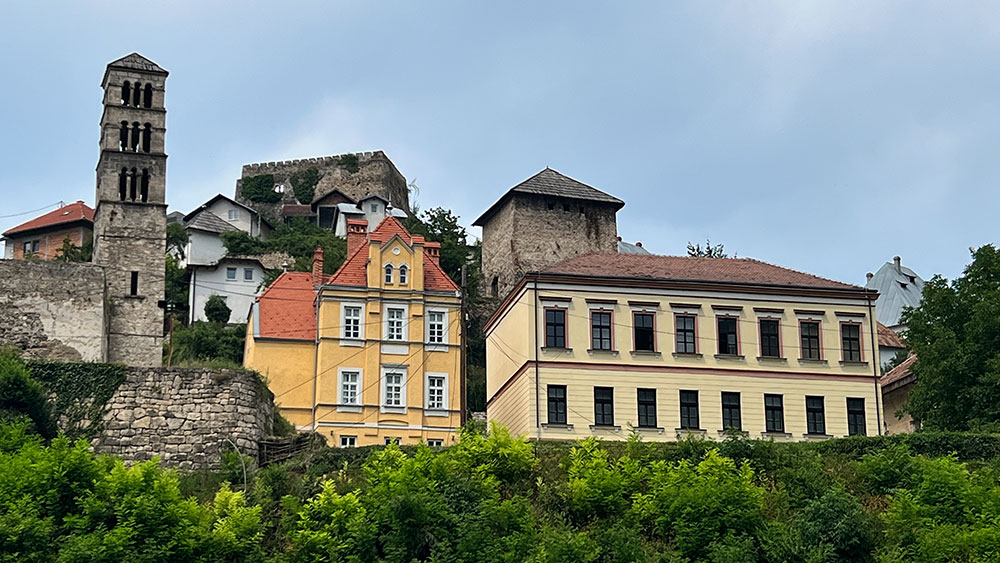 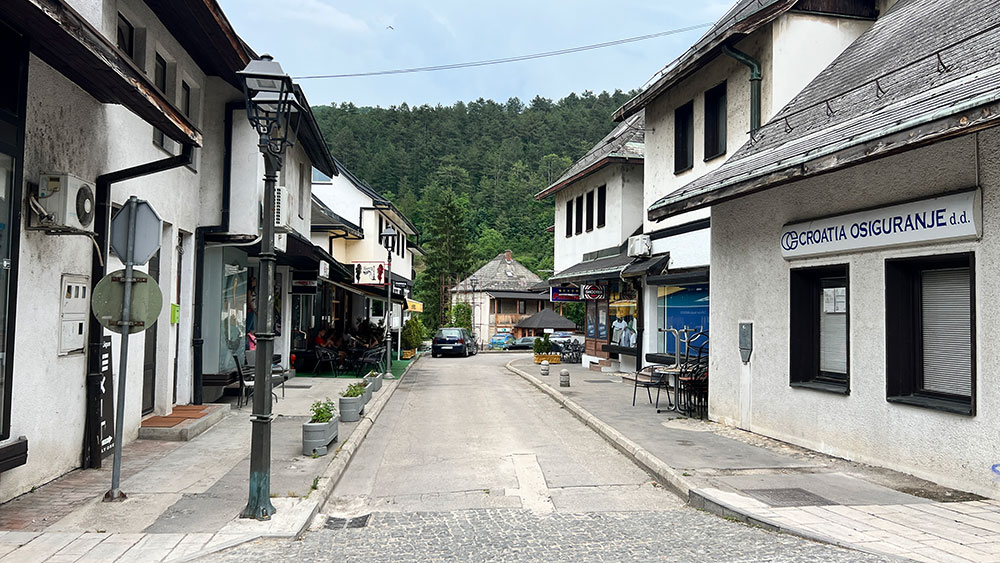 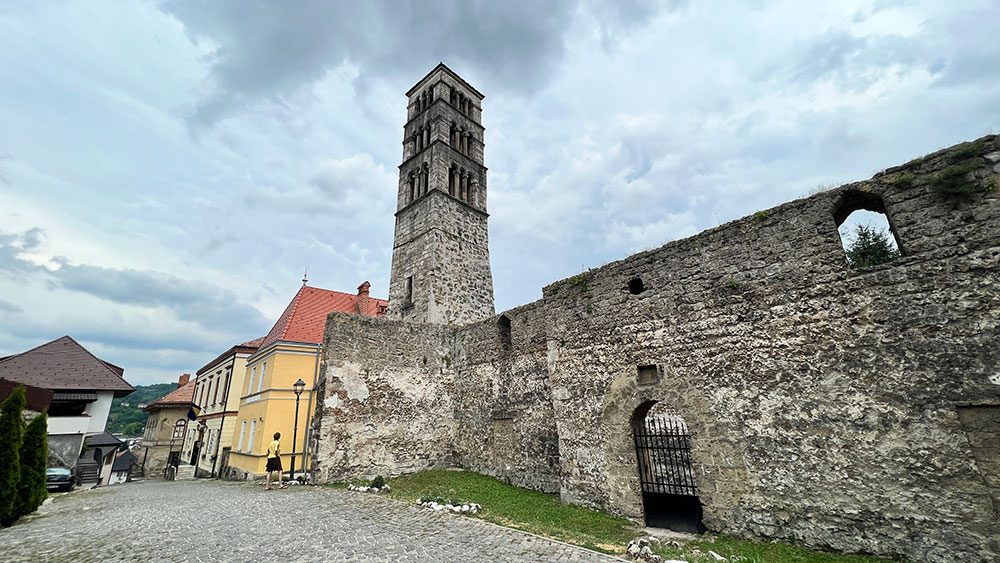 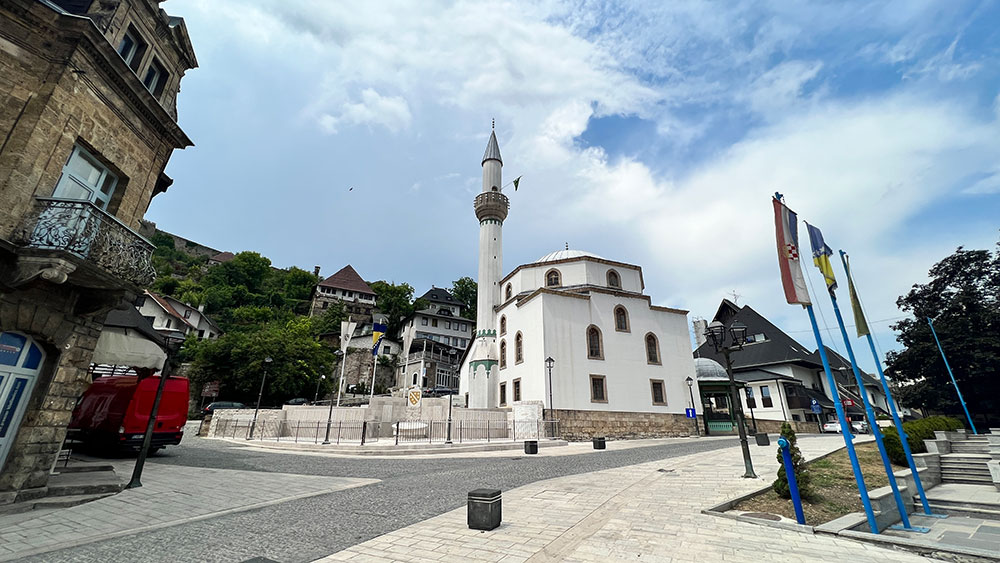 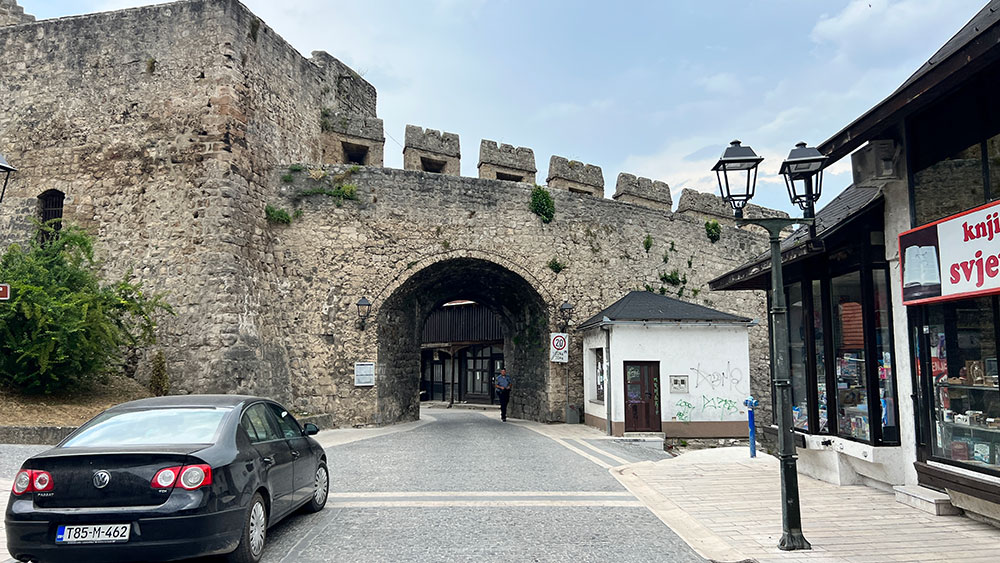 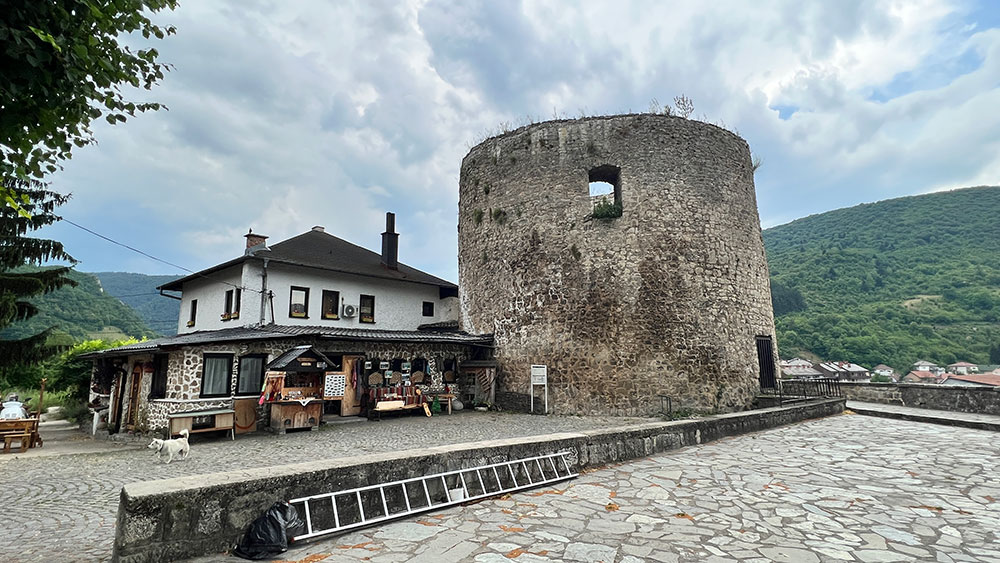 Jajce Catacombs – The catacombs of Jajce represent an underground church. They were built by order of the founder of the city of Jajce, Hrvoje Vukčić Hrvatinić in the late 19th and early 20th century.

They are believed to be the work of Jajce stonemasons who built the entire underground complex in living stone or supported themselves with already existing caves. The catacombs in Jajce seem to be a very important Christian temple. Hrvoje Vukčić Hrvatinić himself wanted to transform them into a family tomb. The catacombs have gone through many epochs and different times and cultures. During the Ottoman Empire, legends say that at that time a dervish was imprisoned in the catacombs for 40 days, considering the place sacred, so people declared him an awliya after leaving them. So they served for spiritual purification.

In the Austro-Hungarian period, due to the favorable temperature, traders used them for storing goods. During the Second World War, before the AVNOJ session, the entire Supreme Headquarters stayed on the plateau of the catacombs, and due to the unstable situation and frequent bombing, they hid in the catacombs themselves. The catacombs of Jajce have been declared a historical monument of Bosnia and Herzegovina. 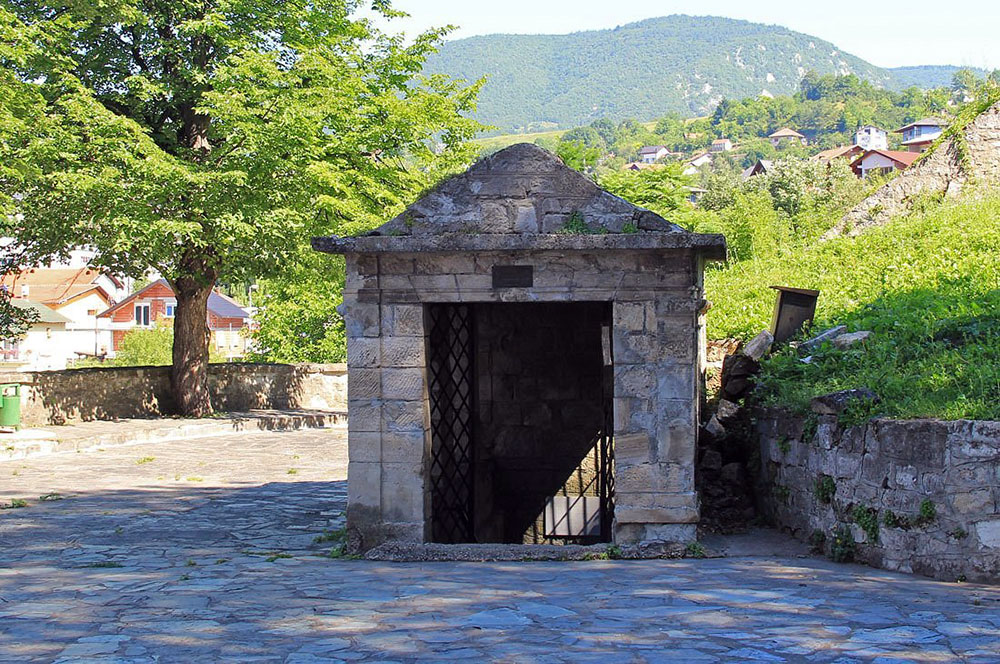 [Entrance to the catacombs in Jajce] 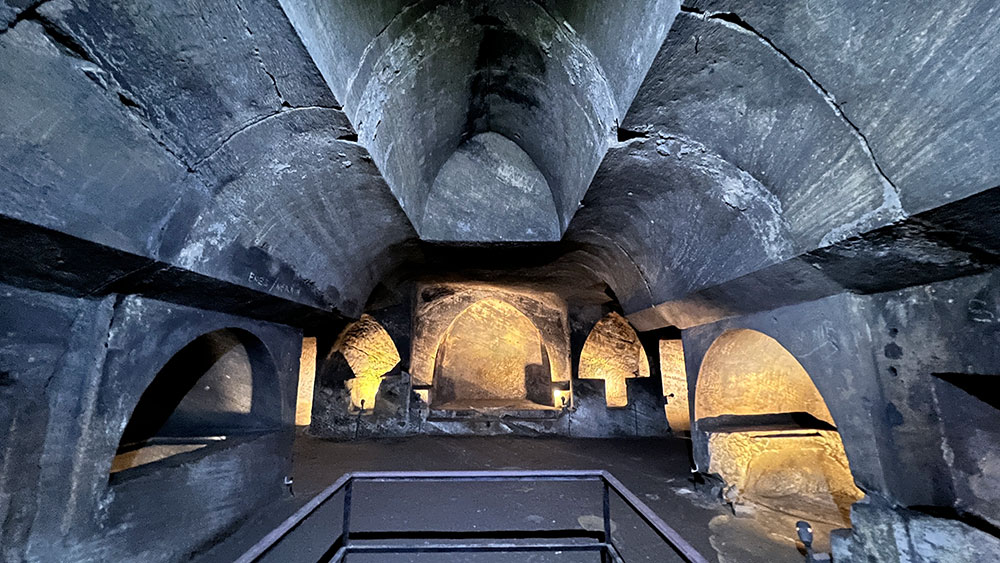 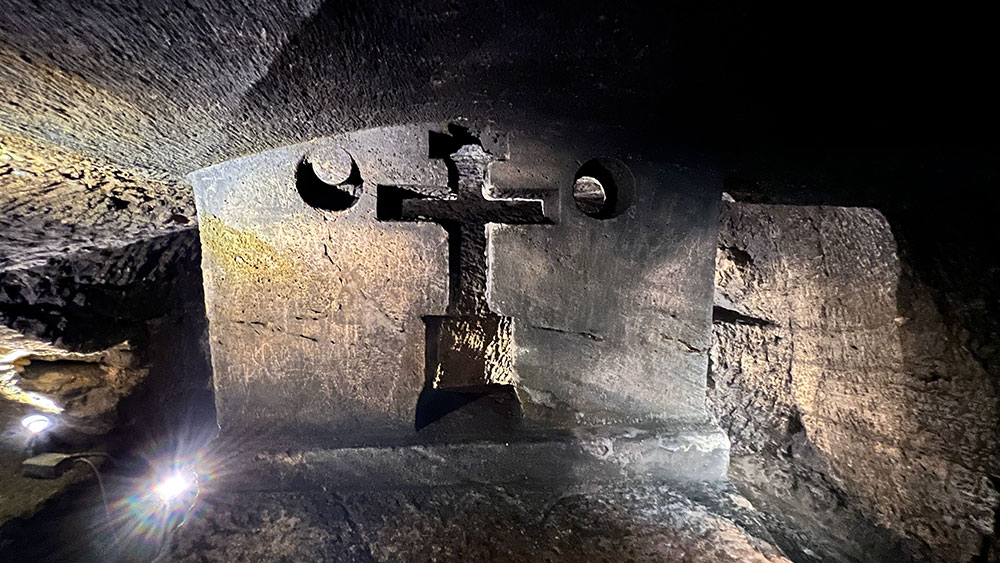 Jajce watermills – About 6km from the old town of Jajce are these little windowless huts sit on top of skinny stilts right over the gushing water. Since the flow here is spread out, by using a series of little mills instead of one big water wheel, the diffuse water power could be aggregated. Most of the huts go back to the period of the Austro-Hungarian empire (about 1867 to 1918), and they give the impression of a little storybook village.

No longer used for actual milling, the Pliva Lakes watermills draw tourists down the river from the giant waterfall in town. That one is certainly impressive with its showy 65-foot drop. But the little shingled watermills feel like they might be home to some local trolls, with their dragons hitched up out back. 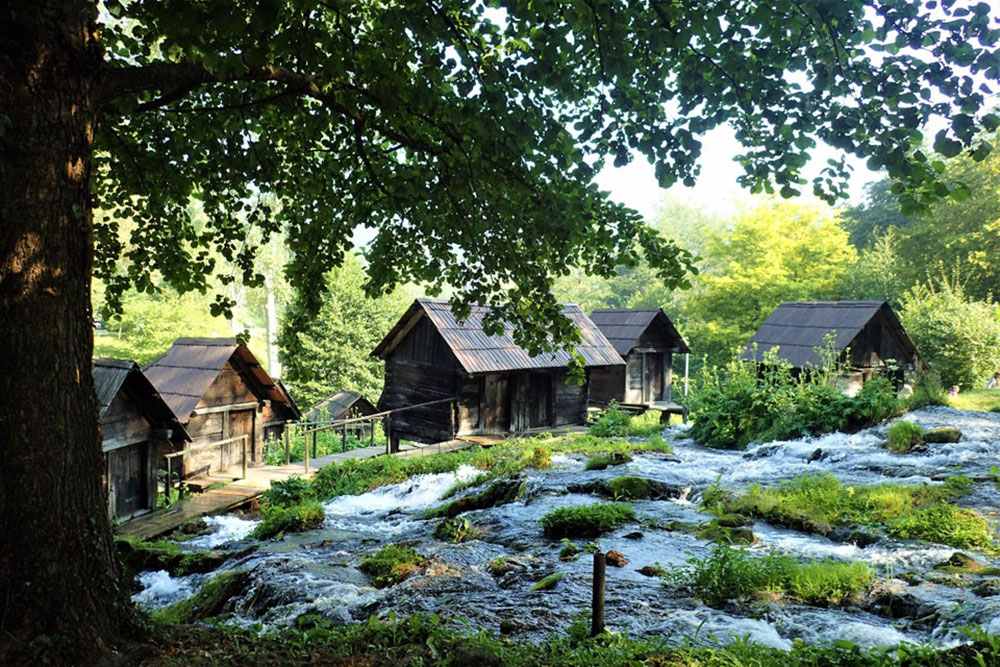 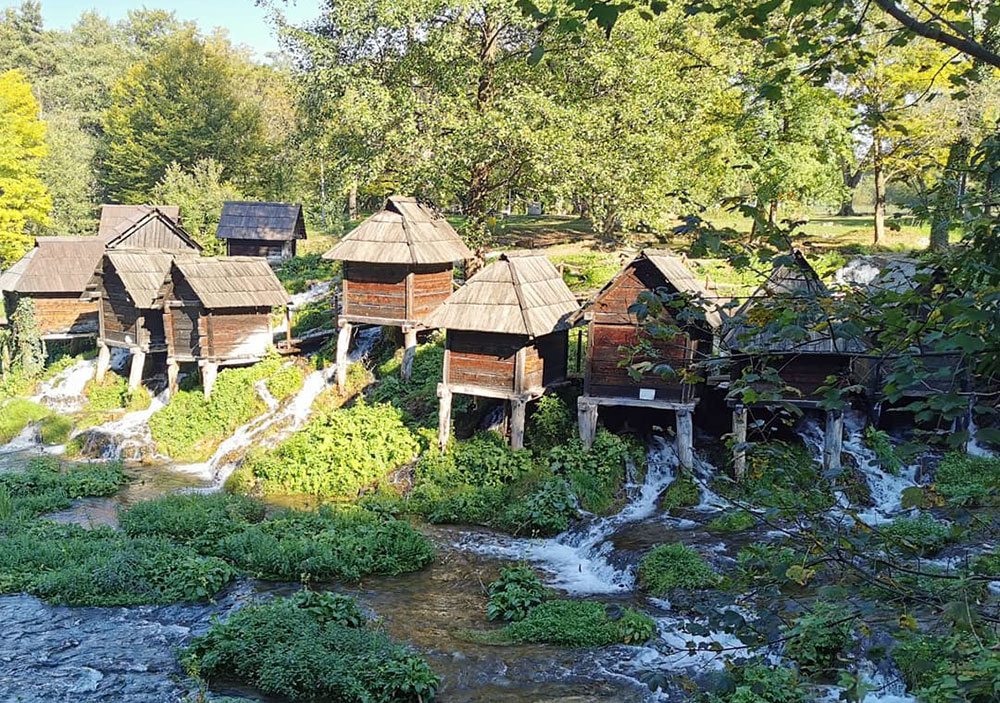 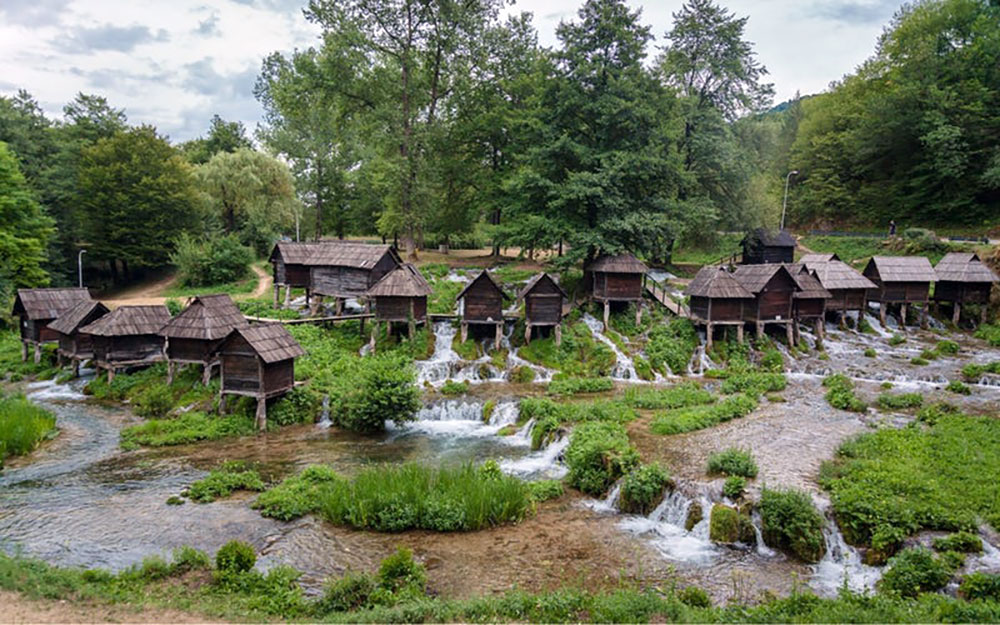 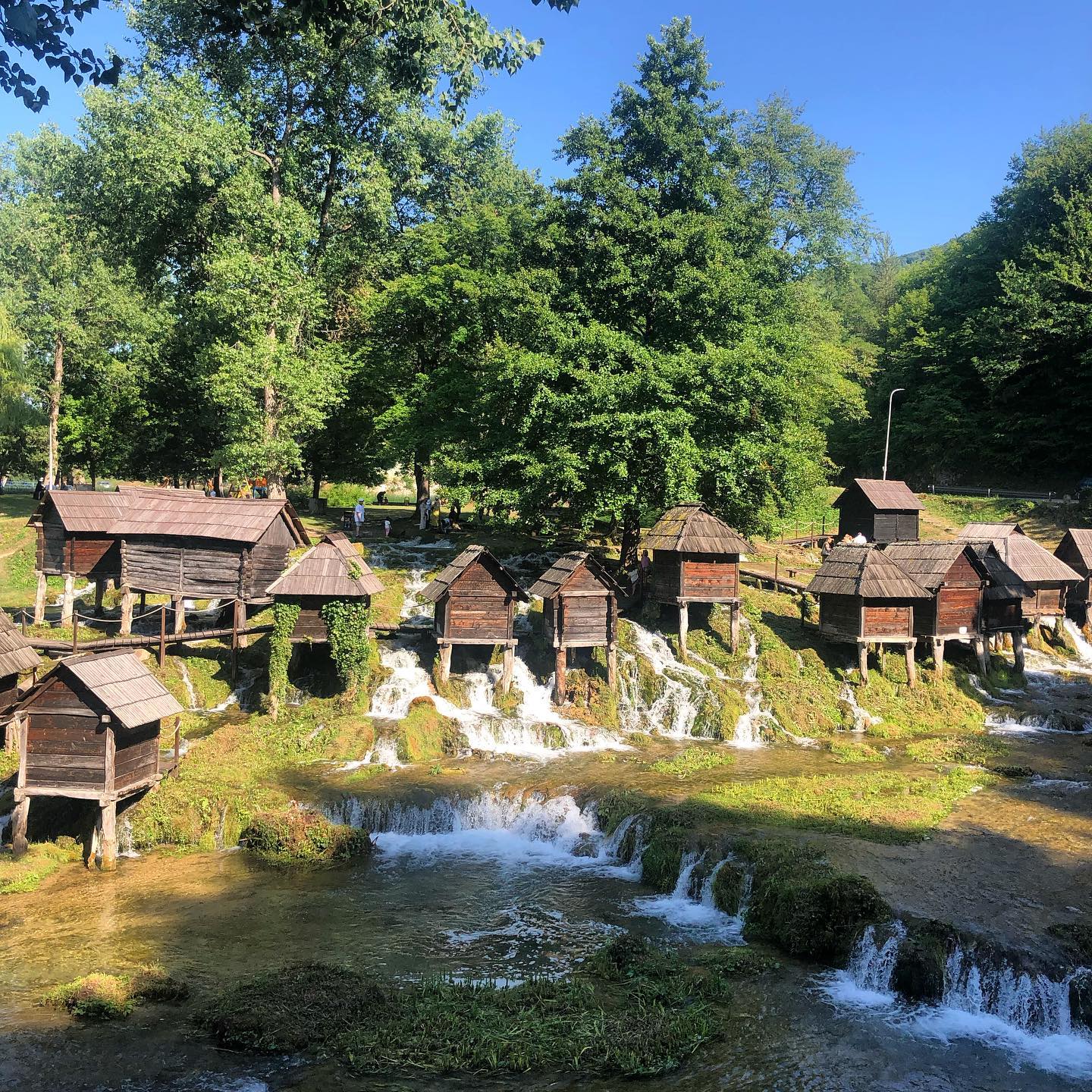 We headed back to old town Jajce for some coffee, before driving for 3 hours back to Sarajevo.

And after reaching Sarajevo in late afternoon, we strolled around the center, had dinner at Simice cafe – pizza and coke!