For day tours to Isla del Sol, it’s advisable to book tickets at least a day in advance with one of many tour operators on Ave 6 de Agosto. The rates may vary a little bit but usually is around Bs 35 per person for a round trip and Bs 25 for one way (to Isla del Sol).

The tour starts at 8:30am and I was at the operator’s office at 8:15am after a good breakfast at the hotel. You are asked to assemble at their office from where someone will escort you to the tour boat docked at the Copacabana beach.

There are many operators on the main street, and most of them charge the same price for day trips to Isla del Sol. But shop around for the difference of maybe Bs 5 in price between the operators.

Two main companies offer transportation to/from Isla del Sol. Additionally, community boats service Yumanj (Mallku and Sol Tours) and Cha’llapampa (Chasqui Tours, Wara Tours and Wiracocha Tours). Launches embark from Copacabana Beach around 8:30am and 1:30pm; and depending on the season and company they may drop you at either the north or south of the island.

Snacks and drinks (incl alcohol) are provided on the boats at a cost, which you have to pay at the end of your trip. For example, small water bottle costs Bs 4, while a beer can costs Bs 15.

Most full-day trips go directly north to Cha’llapampa and takes just over 2 hours to reach. Boats anchor for 1.5-2 hours which gives you enough time to hike up to the Chincana ruins and return again to catch the boat at 1pm to the Escalera del Inca and Pilko Kaina in the island’s south. The hike up to Chincana ruins is very leveled and not steep at all. The views from up at the ruins are fabulous!

The island’s most spectacular ruins complex, the Chincana Ruins (Bs 10; pay before the start of hike) lies at the island’s northern tip. Its main feature is the Palacio del Inca, a maze of stone walls and tiny doorways, also known as El Laberinto or by its Aymara name, Inkanakan Utapa.

Just 150m away (before you reach the ruins) is the Mesa Ceremonica (Ceremonial Table) that was a site of human and animal sacrifice. And east of the table lies the large rock know as Titicaca or Titi Khar’ka or Rock of the Puma. 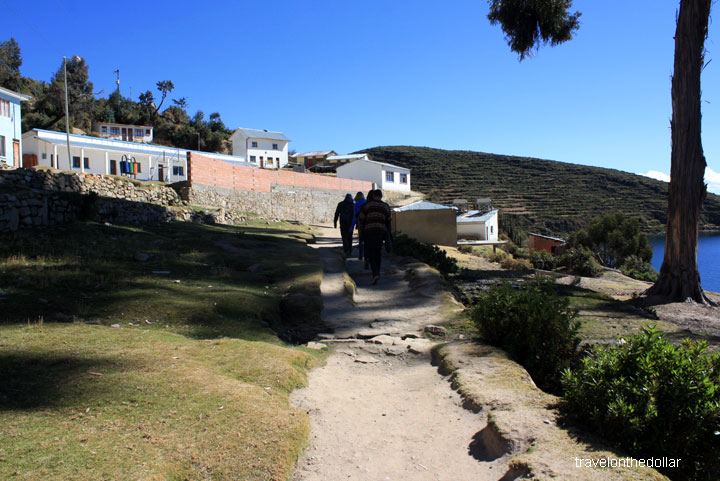 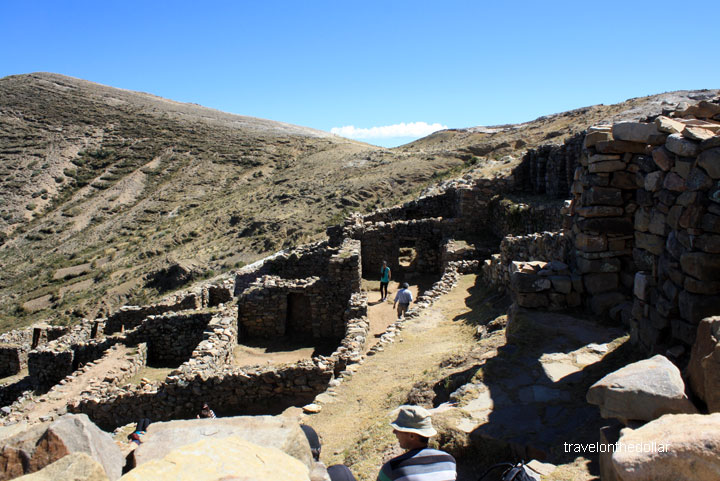 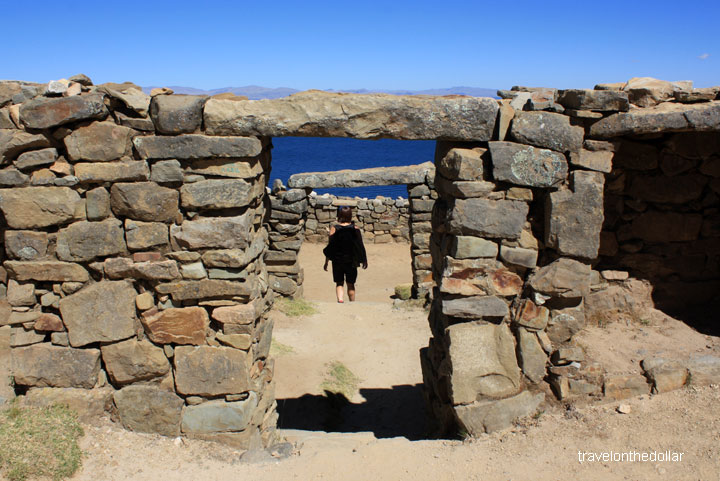 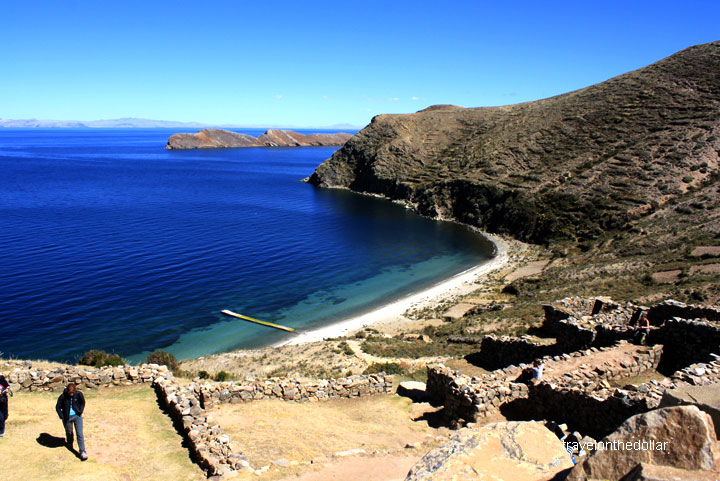 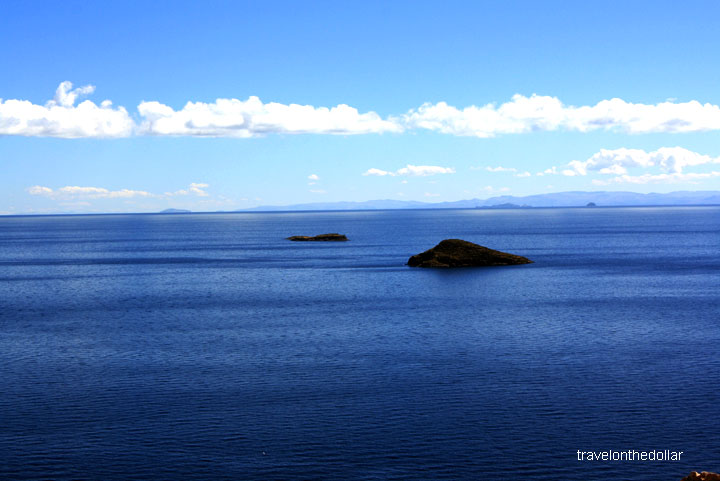 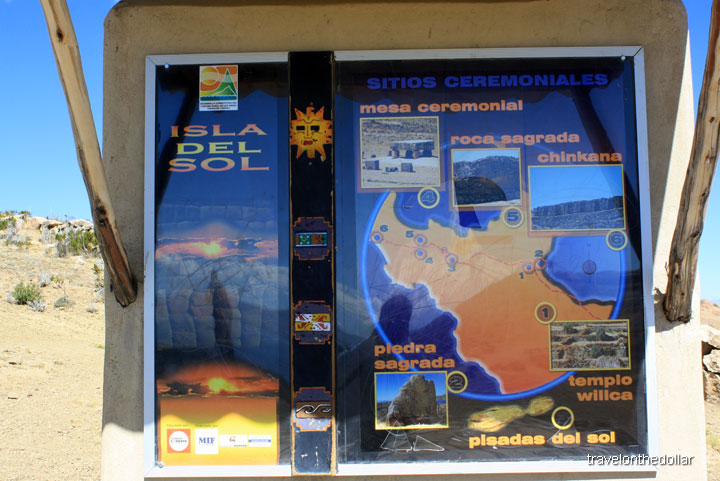 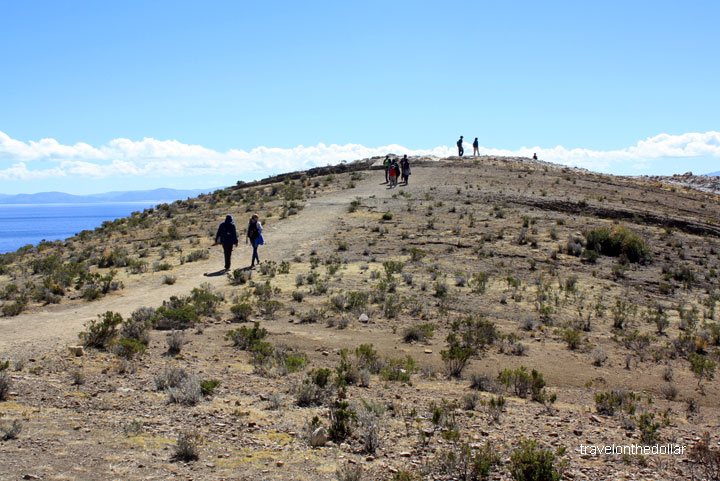 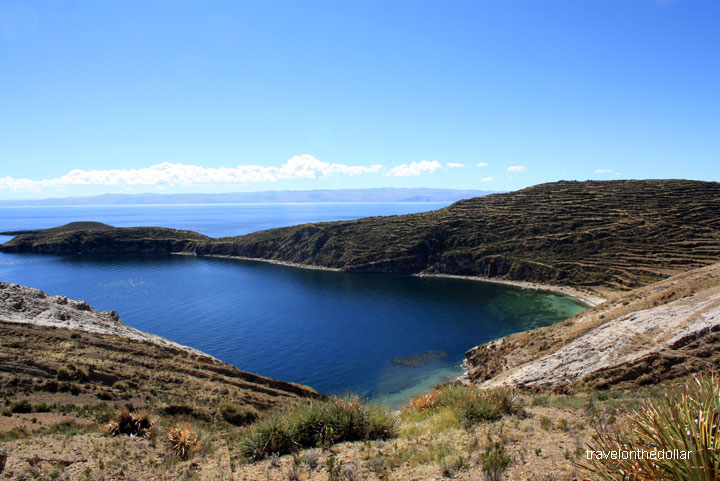 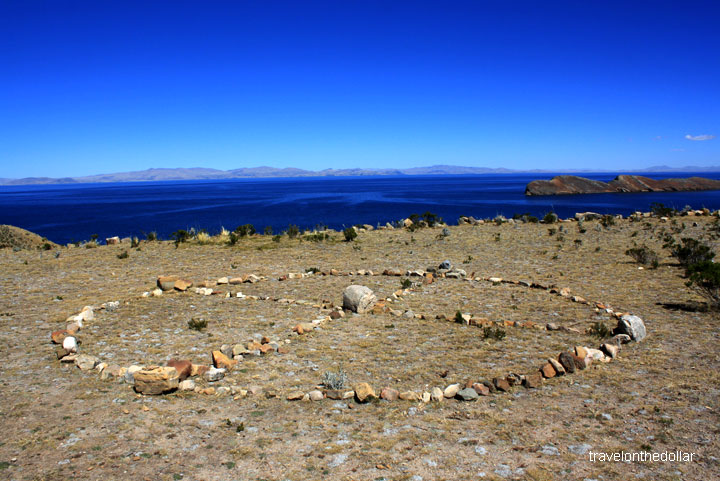 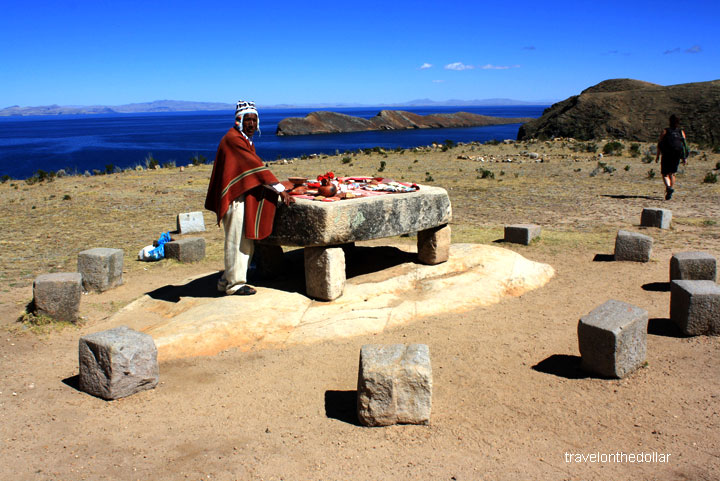 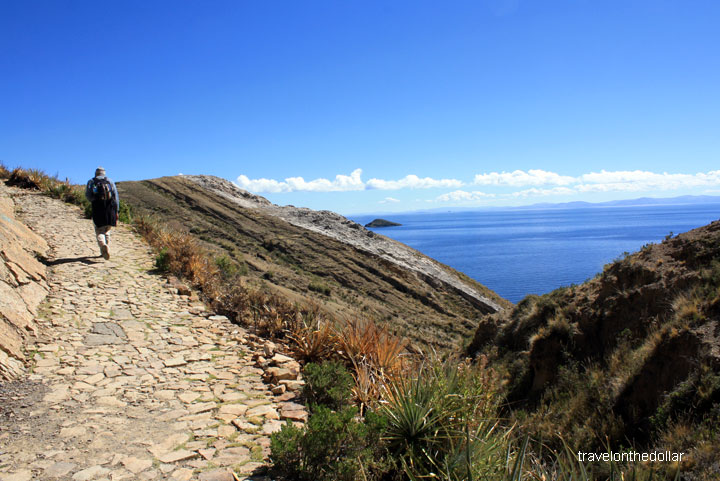 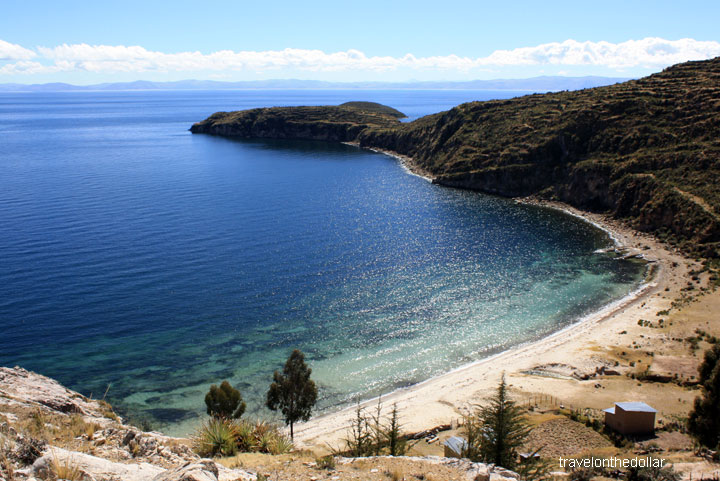 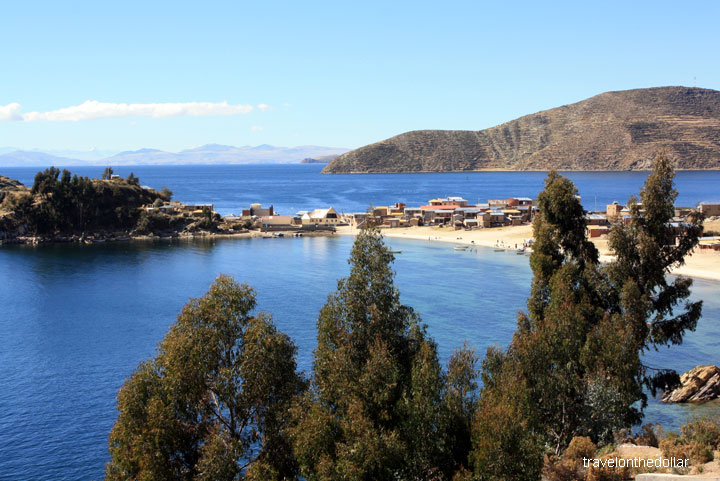 From the north end of the island you have two options –

For either options, it takes 2 hours to reach the south side of the island where the boat will halt for 1 hour before leaving for Copacabana. 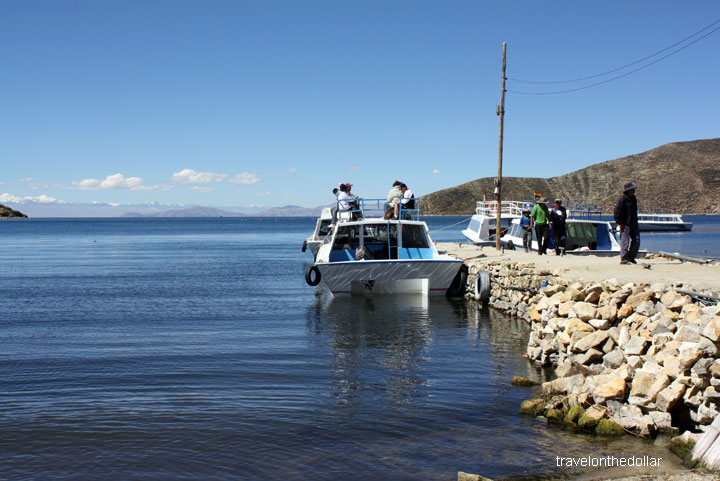 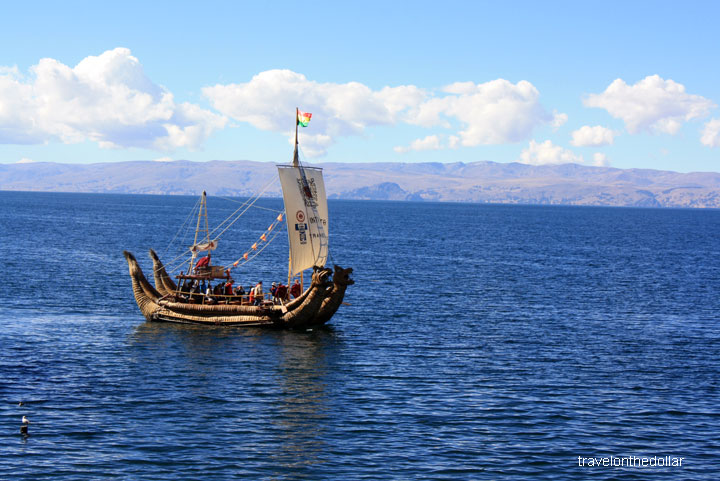 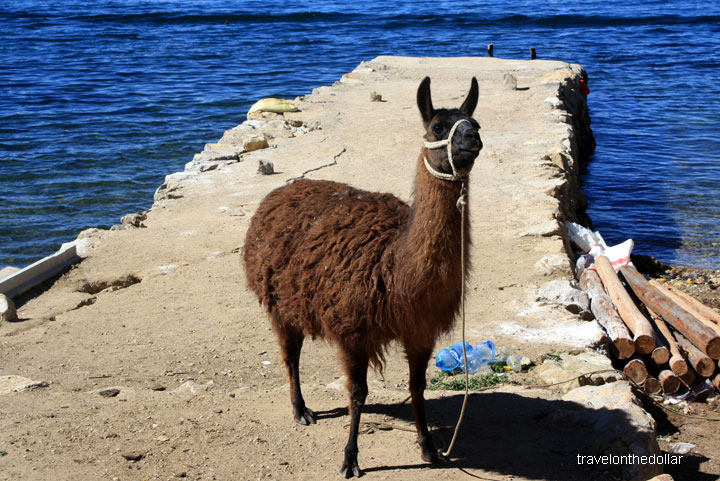 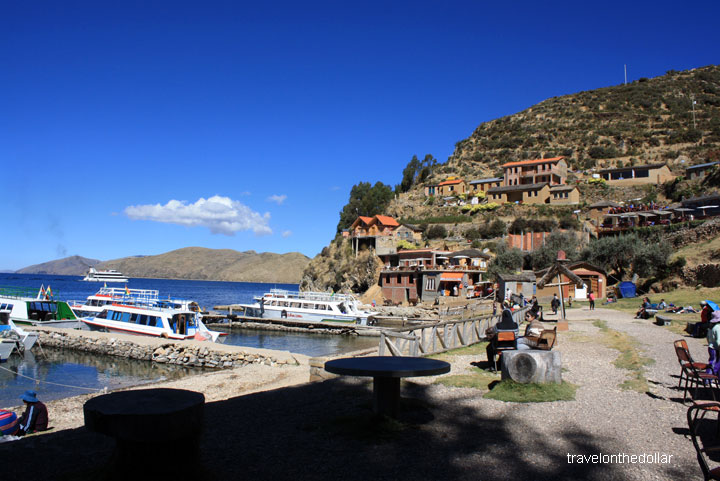 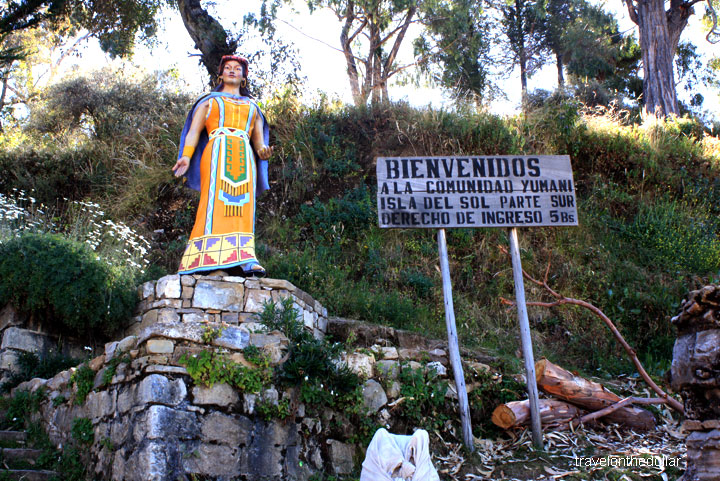 Alternatively, you can stay overnight or longer on the island, in which case you must buy a one-way ticket before you start.

By the time we reached Copacabana beach, it was past 6pm so I relaxed at the hotel. A long nap later, walked around the town for a night view of the beach and cathedral.

Boat trip to island of sun in Lake Titicaca.

Travel from Copacabana to La Paz and fly out.