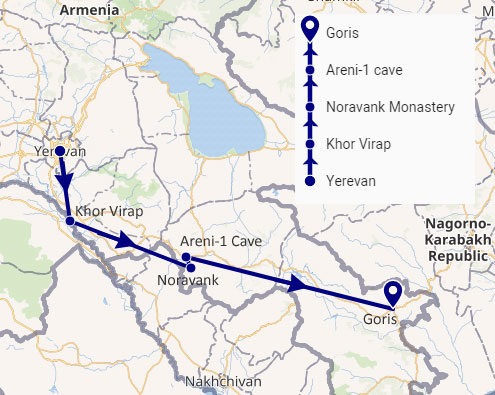 Today I was leaving Yerevan to visit some of the sights in south Armenia, and then heading to Artsakh from Goris, spending a day in Artsakh and return back to Yerevan in a three-day trip. For this, I decided to rent a car from Yerevan airport and returning back there since I was flying out on my third day.

Fortunately, I met a fellow traveler at the hostel in Yerevan who wanted to join me in the three-day trip. So after breakfast at the hostel, we went to the airport to pick up a rental car.

We had not booked a car in advance and after shopping for a while at various companies at the airport, we selected a basic economy car from Hertz that costs $29 a day (insurance excluded). My credit card from U.S. covers full insurance for a rental car, which saved me some money!

Note on rental car to Artsakh – Since Artsakh is considered to be a part of Armenia for the rental car companies, they do not charge anything extra to drive to Artsakh. But it’s always recommended to mention to them about your trip to Artsakh, if you plan to have one, before renting the car.

First stop was about 50 km (30 miles) south, close to the border with Turkey, from where you get the best views of Mount Ararat, the holiest mountain for Armenians. This fortified monastery is a place of pilgrimage and a holy site for the Armenian Apostolic Church. Entrance is free.

The monastery is located close to the border between Armenia and Turkey, on a hill near the village of Pokr Vedi. Long ago it was the site where Artashat, the ancient Armenian capital, was located.

The pit dungeon is 4.4 meters in diameter and 6 meters deep. Visitors can descend down using a narrow ladder in order to experience the atmosphere, which is mostly quite dark. 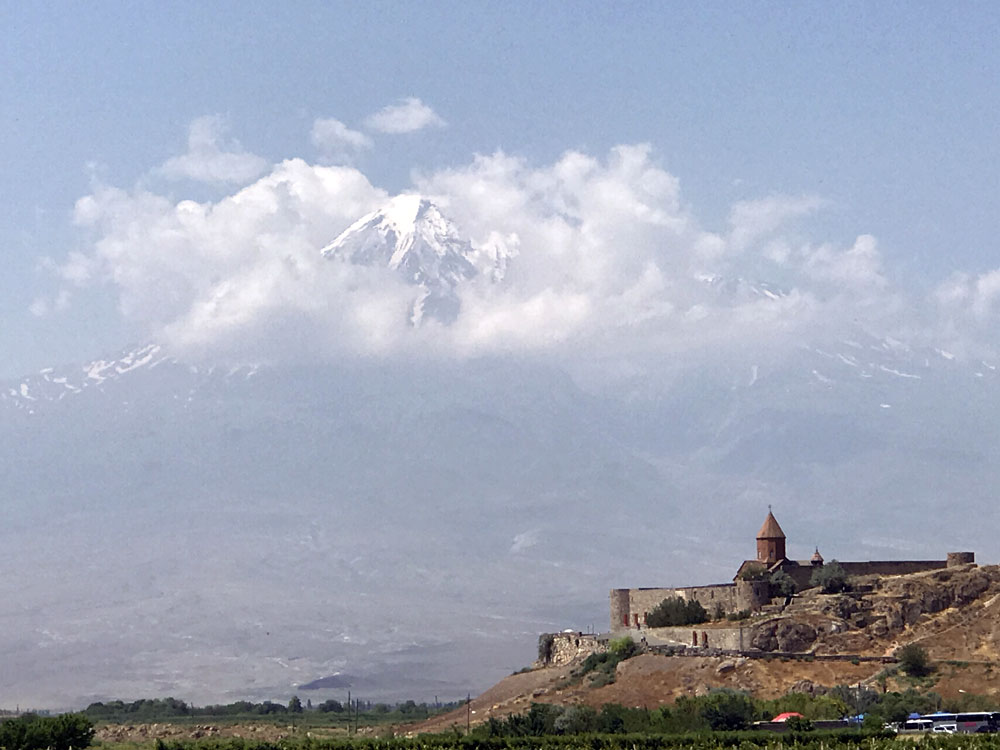 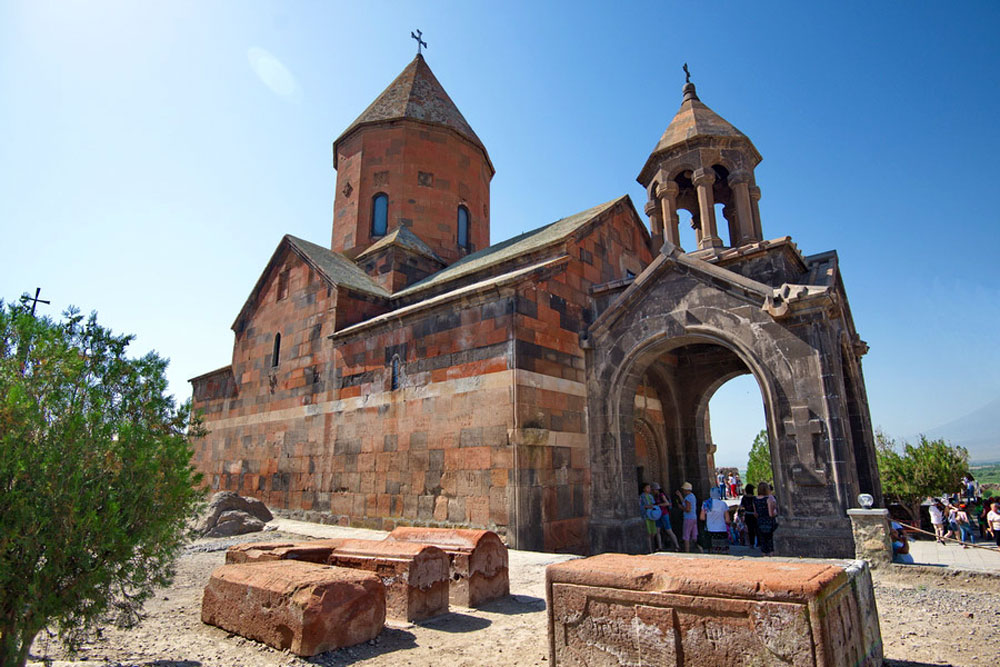 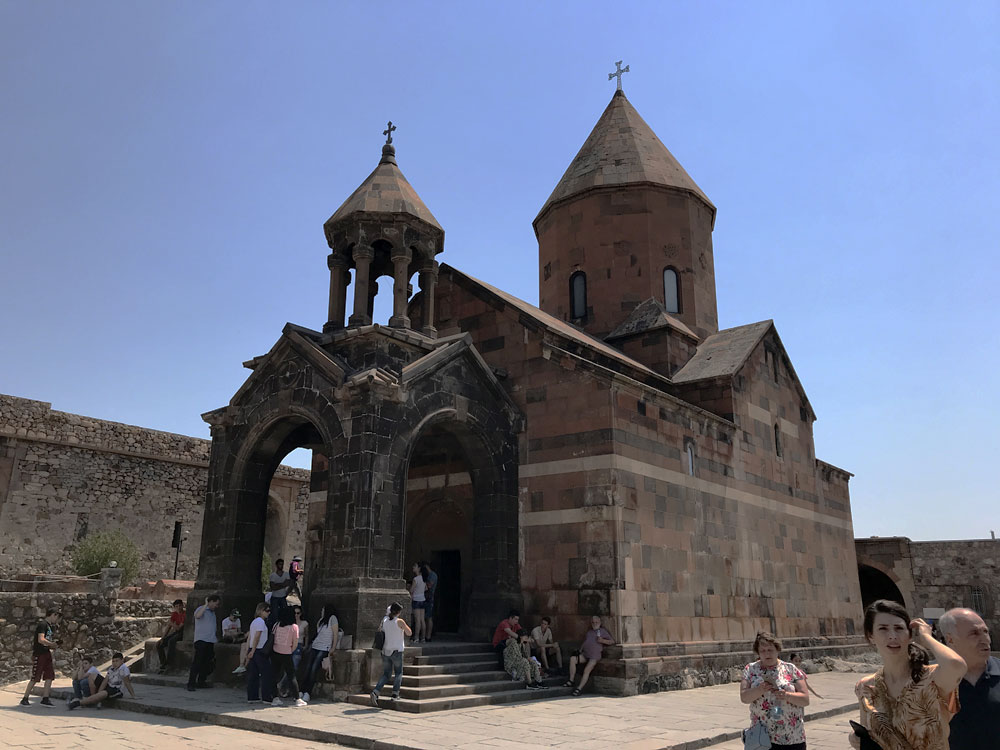 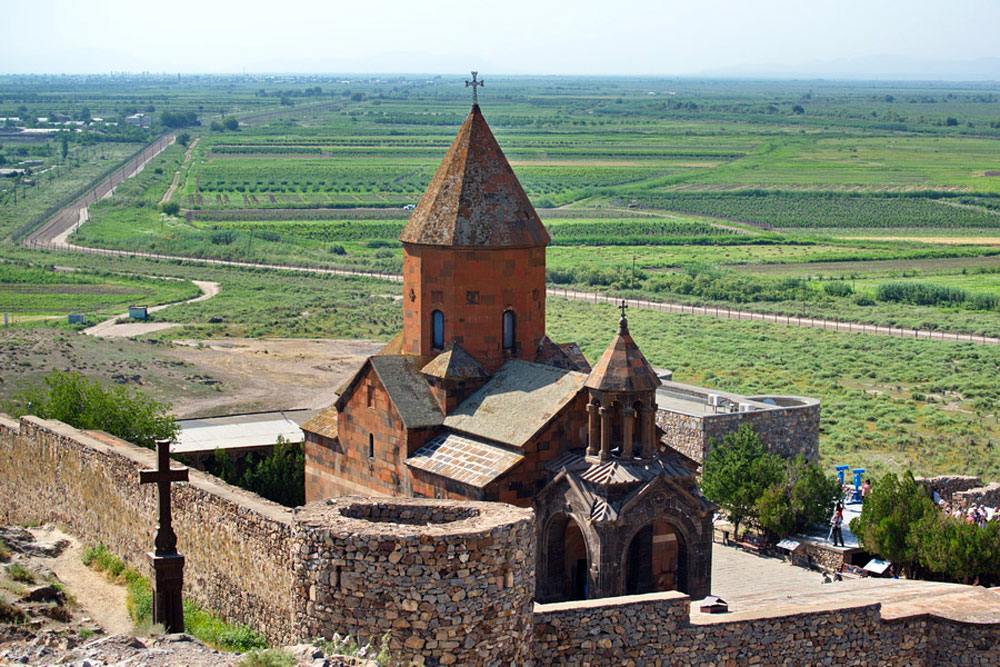 Driving south-east from Khor Virap for about 1.5 hours brought us to Noravank monastery. Nor in Armenian is new and Vank is monastery, making this the New Monastery. This beautiful monastery was built in the 13th century on the ledge of narrow winding gorge above the Amaghu River, near the city of Yeghegnadzor. The spare lines of the church contrast beautifully with the sharp red rock cliffs, and the dramatic scenery is one of the best reasons to visit Noravank.

The most magnificent building of the monastery is the two-story St. Astvatsatsin Church, constructed in 1339 by Prince Burtel Orbelyan. The semi-basement first floor of the church serves as the tomb of the Orbelyan family. Above the tomb, on the second floor, there is the cross-shaped chapel. There are steep stairs leading up to the second floor. The decoration of church is more reserved in the lower part of the building and more elegant in the upper part. The carvings and images on the outside of both churches are truly spectacular. They were done in the 14th century by Momik, who was famous for his human depictions of religious figures.

Pay special attention to the writings and alphabet at Noravank Monastery. The Armenian alphabet was designed so that a single swastika (visible on a khachkar outside Surb Karapet) was a monogram of the alphabet: every letter could be found in its shape. This same idea was repeated in inscriptions around the complex, with words written with all of their letters found in a single shape. This saved space, so that more could be written. During the unstable times, when invasions and destruction were common, Armenian history was written carved into the church walls, and words were written as monograms, with all the letters stacked on top of each other, in order to save space. 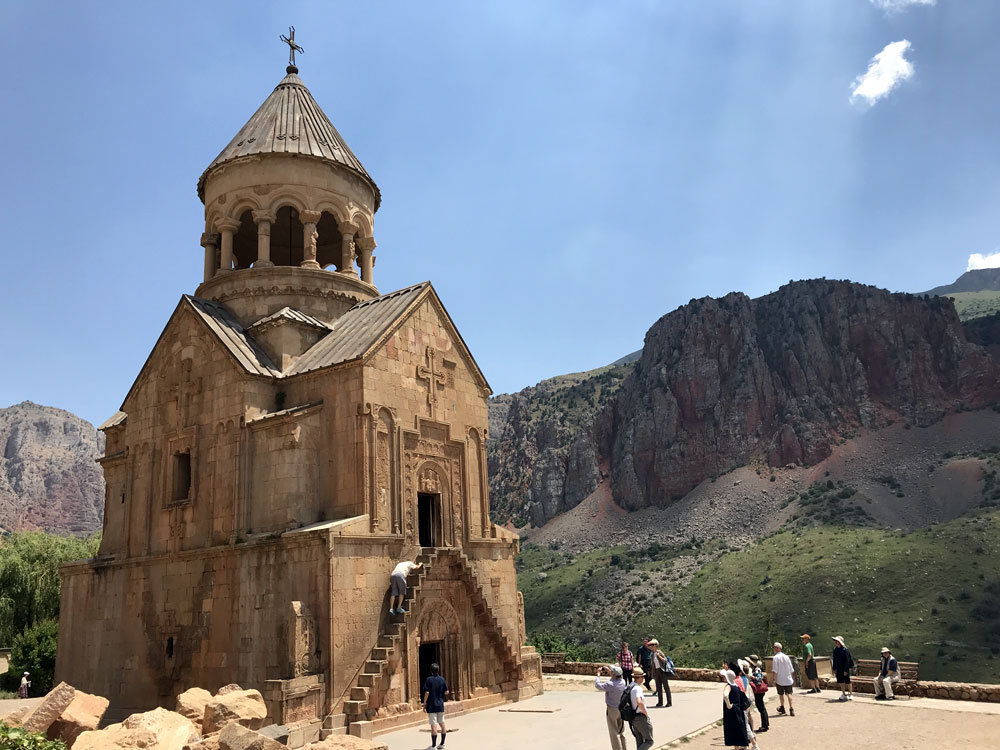 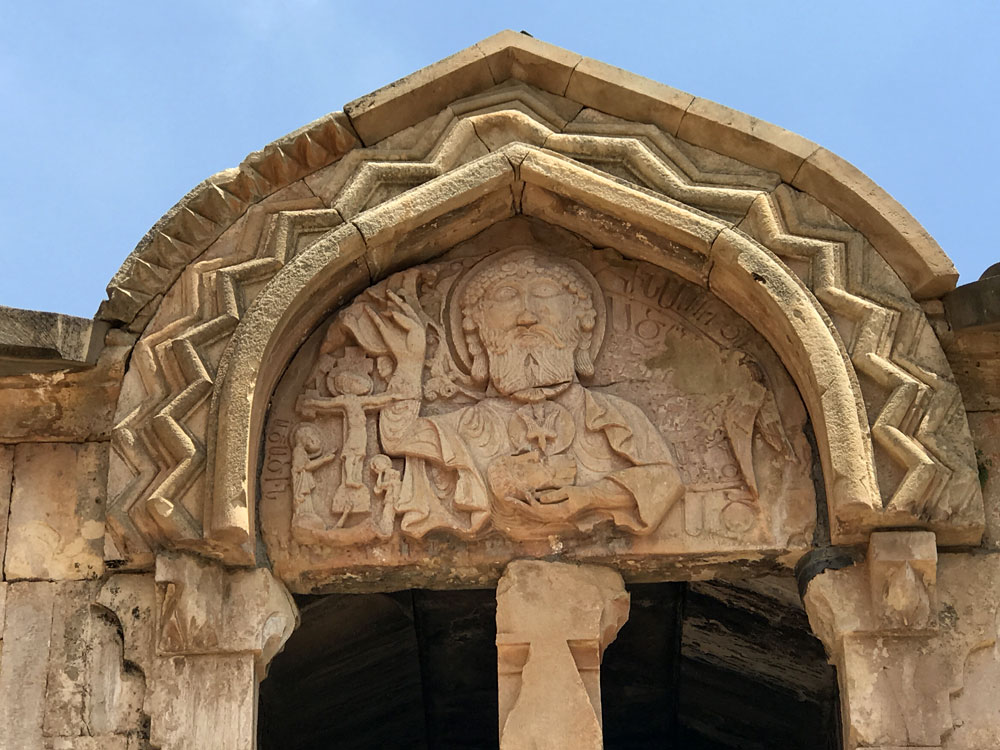 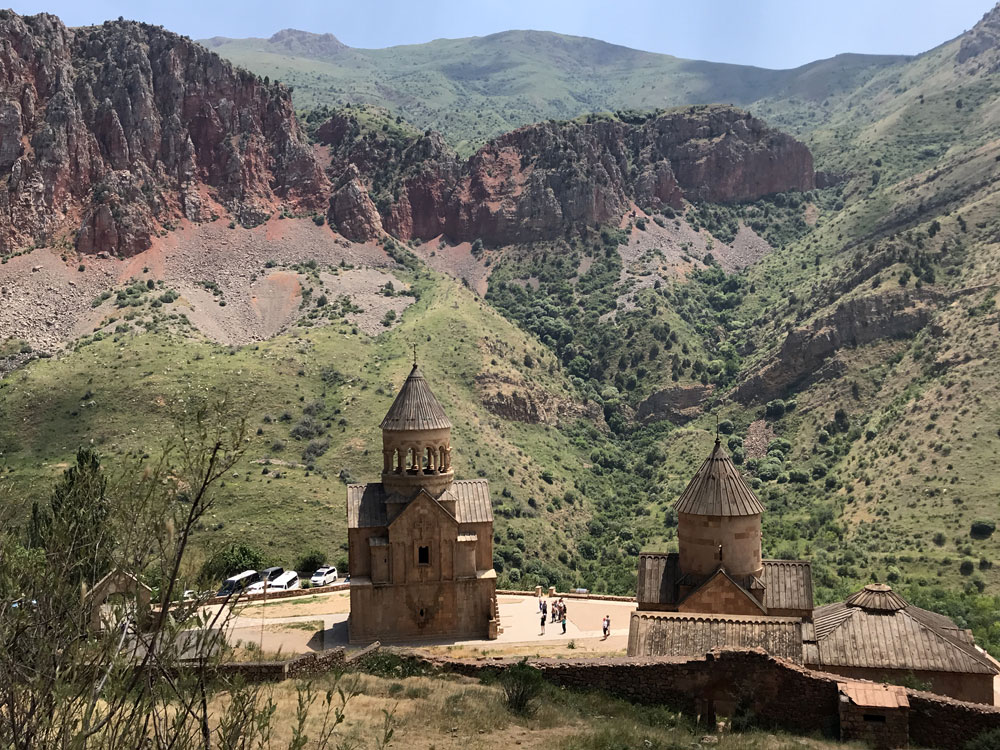 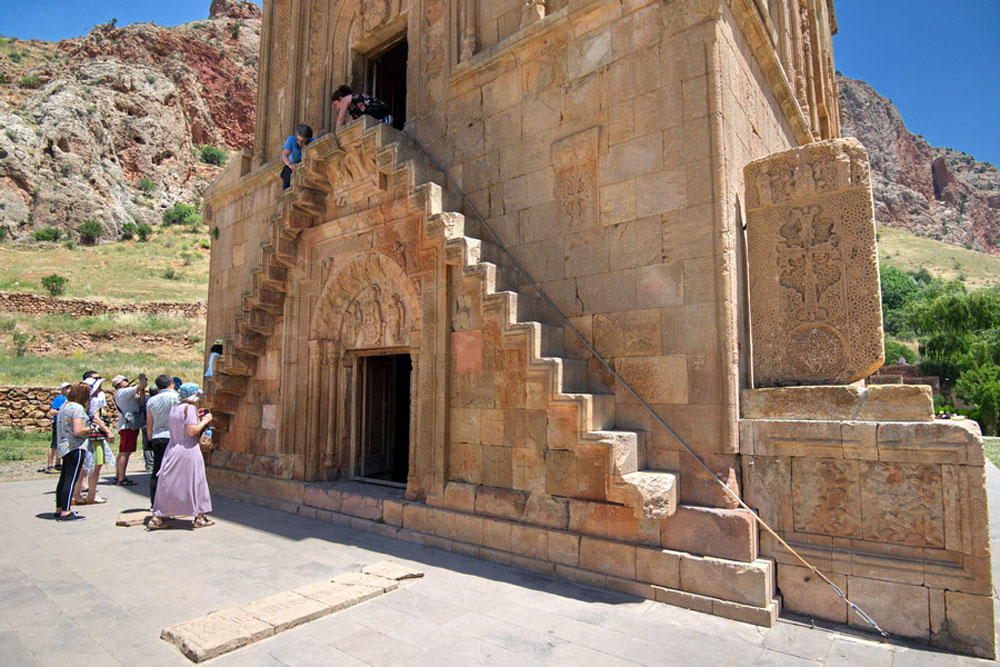 [Staircase leading up to the second level at Noravank Monastery] 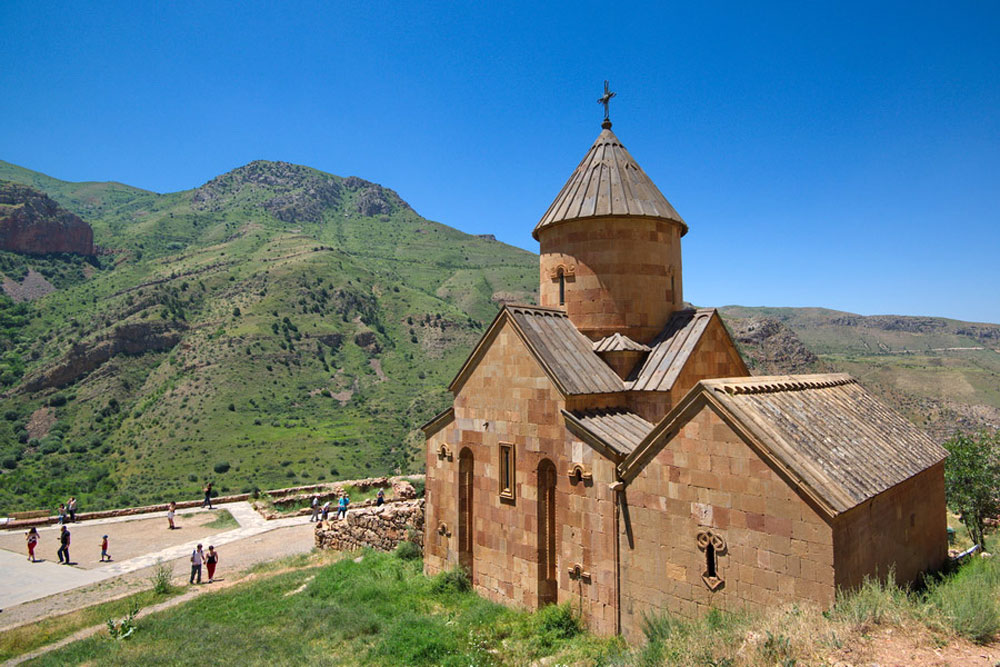 Just a short drive away from Noravank monastery lies the Areni-1 Cave. Thought to be some simple caves, excavations starting in 2007 revealed large complexes, which showed that this cave was once used for religious and economic purposes. A wine press was found in one room of the cave, where there is a hard place that drains into a jug. Traces of seeds, stems, and the compound that gives red wine its signature color were found, which led a wide array of scientists to conclude that the area was used as a winery about 6,000 years ago.

Areni Cave is now recognized as the oldest winery in the world. Only in two km from the cave there is one of the most popular wineries of Armenia, Areni Wine Factory.

The oldest leather shoe was also found in Areni Cave, stuffed with grass and stowed away for storage. It’s owner must have made it around 3,500 BC, in a style that is still common to this day across the Caucasus and the Balkans. The oldest straw skirt in the world (3,900 BC) and the oldest brain (4,000 BC) have also been found in the cave, alongside ceramics, straw baskets, and ritual items. There were even skeletons found in jars, which may be from ritual sacrifices (though it’s the only case of ritual sacrifice ever found in Armenia).

Up to date, only 5% percent of Areni Cave has been explored, so it could be generations before we know what the entire cave holds. Excavations are ongoing, but there are many rooms and much more of the cave that hasn’t been touched. 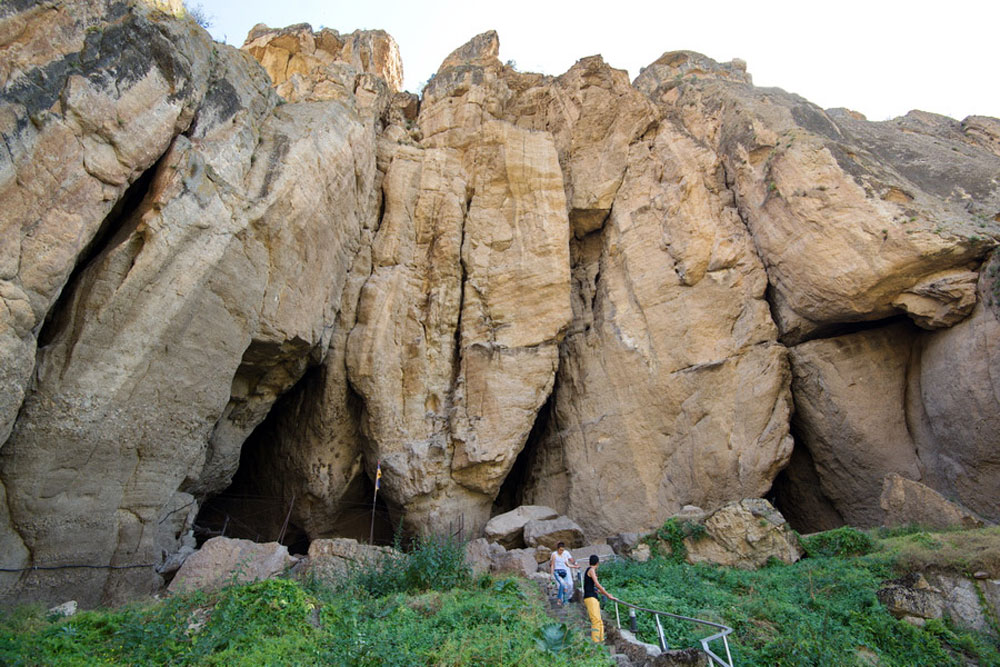 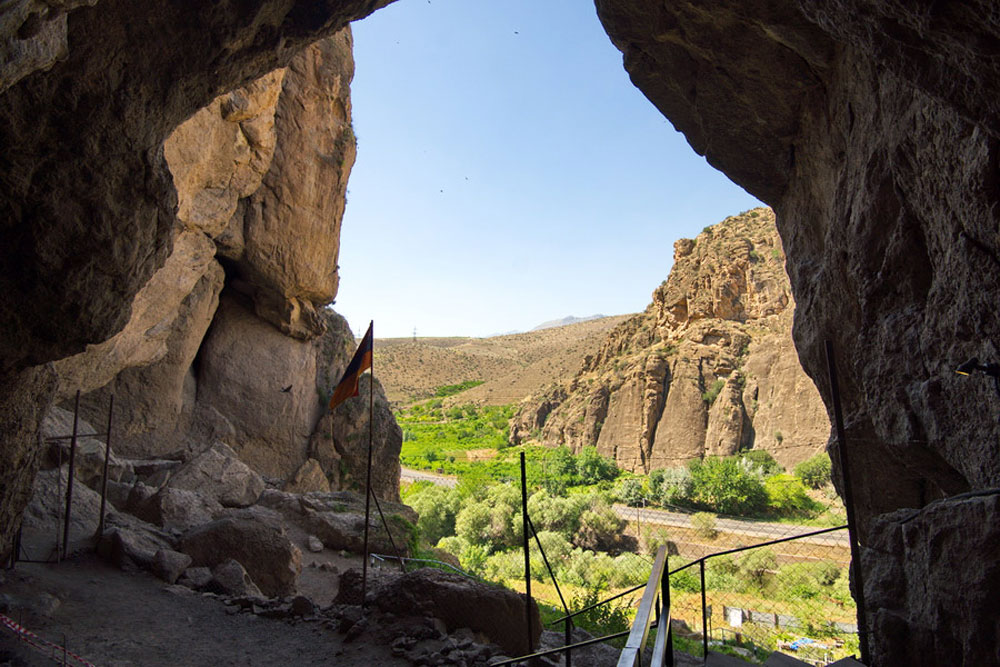 [From the entrance of Areni Caves] 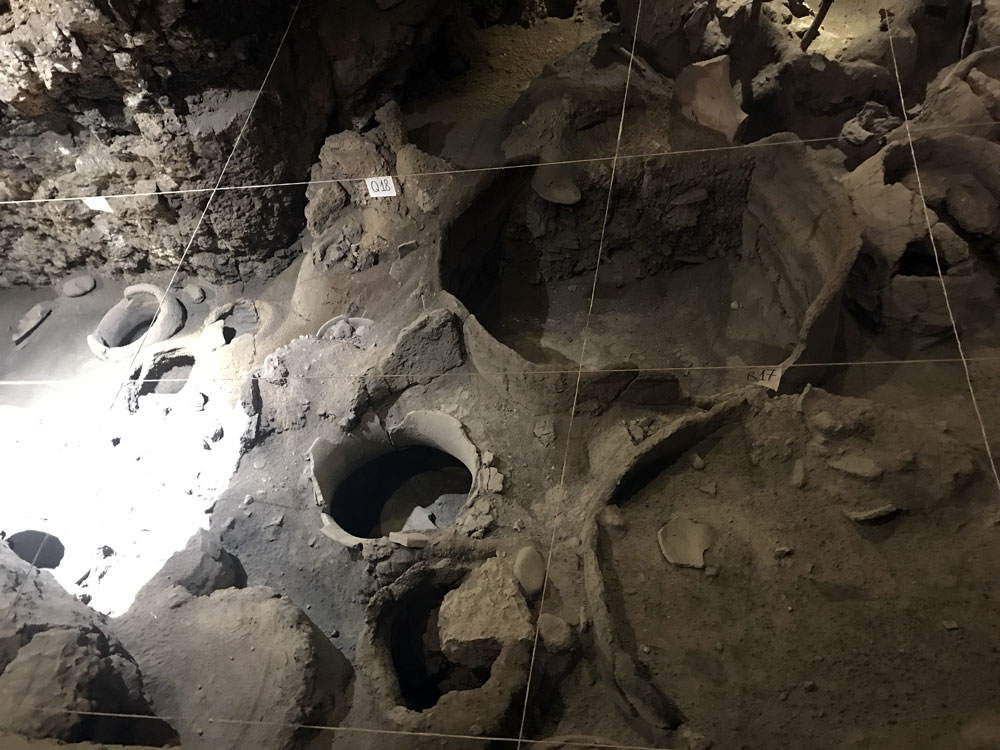 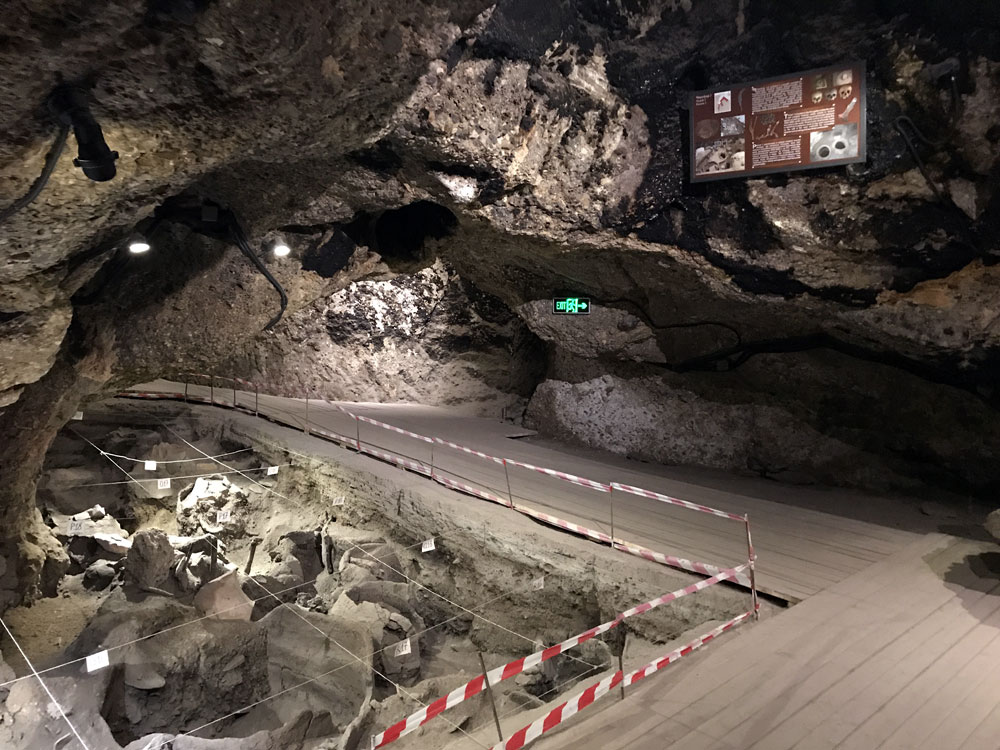 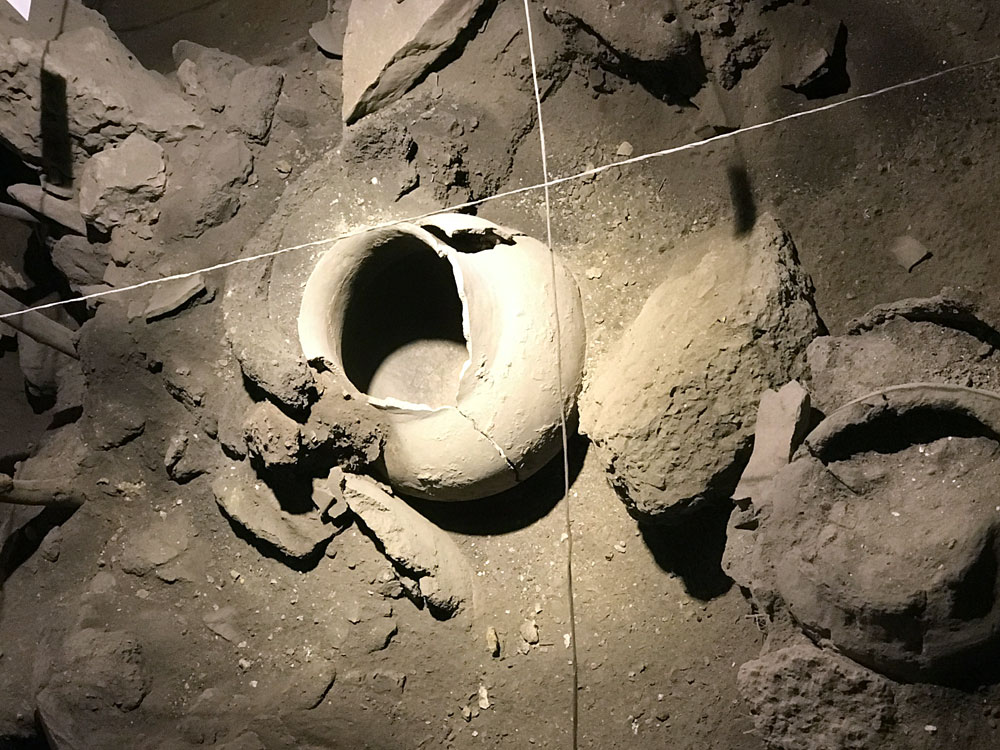 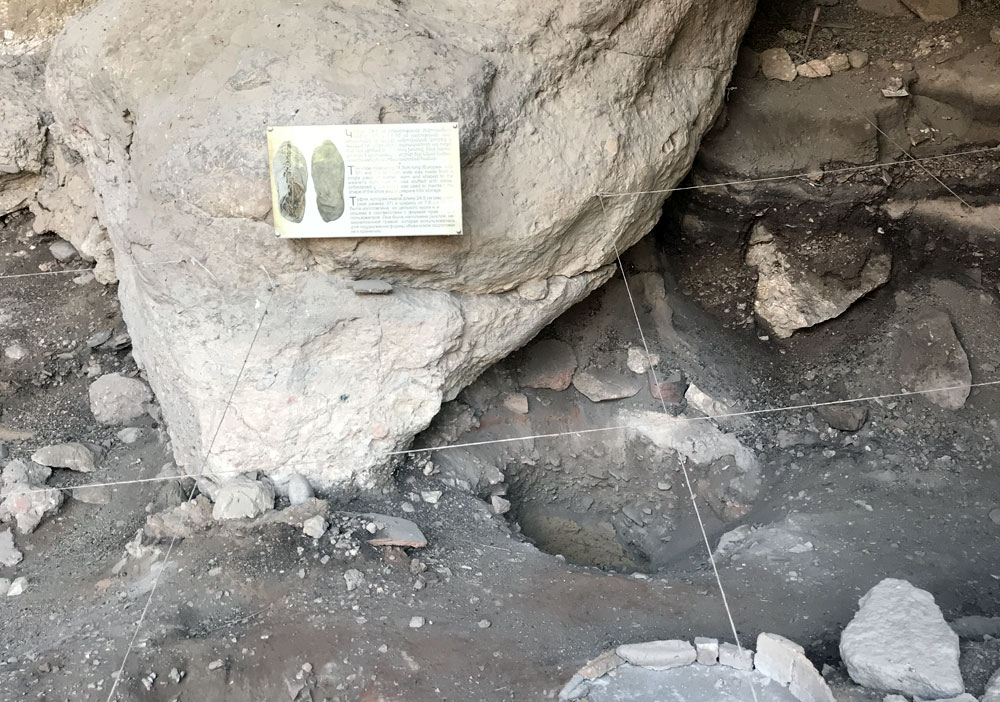 Last stop before heading to the city Goris which was our pit-stop, was to take a slight detour to visit the stunning waterfalls of Shaki.

The Shaki Waterfall is situated 6 km from the town of Sisian. On the left side of the river Vorotan’s gorge, basalt lava flows have solidified to form a ledge 18 meters high from which the waterfall cascades down. 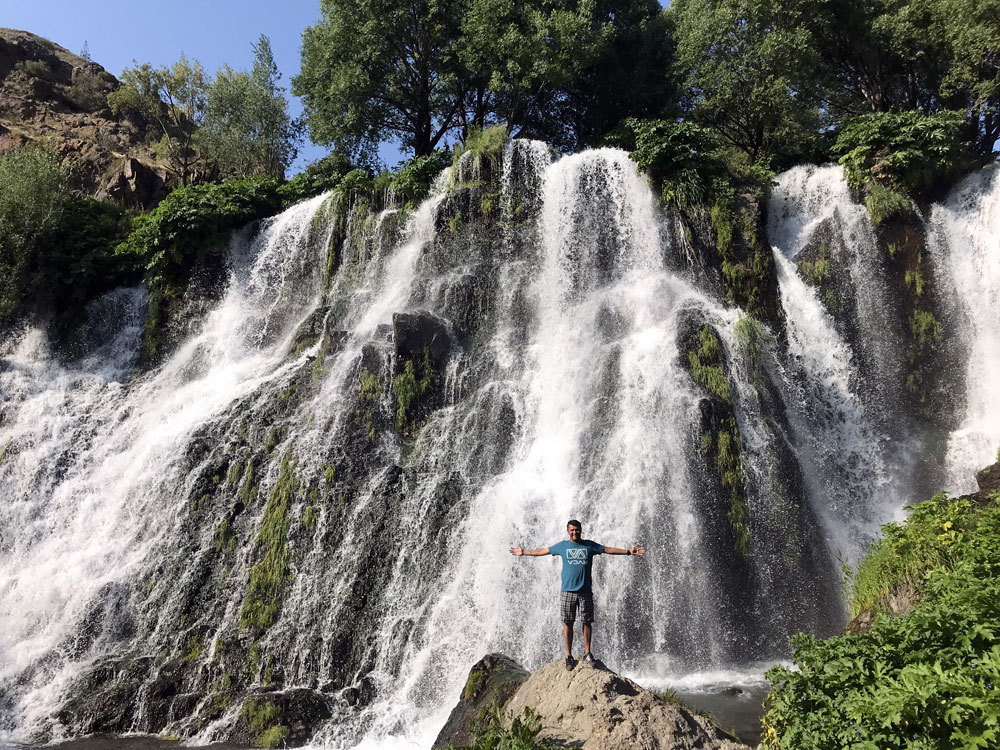 Driving through the winding roads of Armenia, we stopped by some weird monuments along the way that are built to symbolize different municipalities. 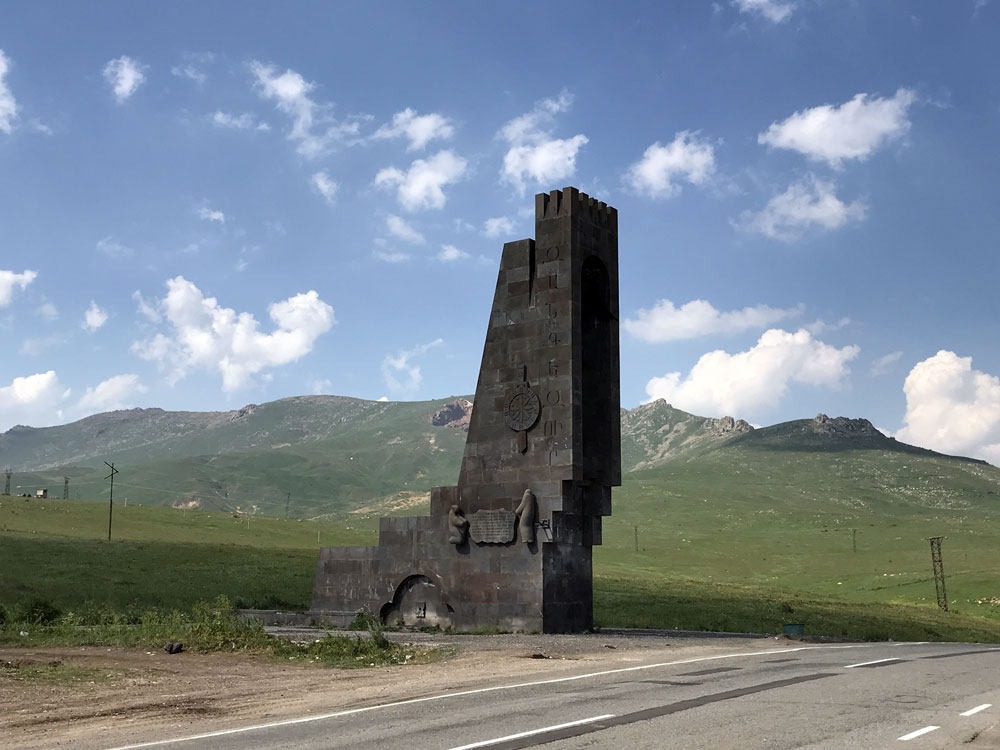 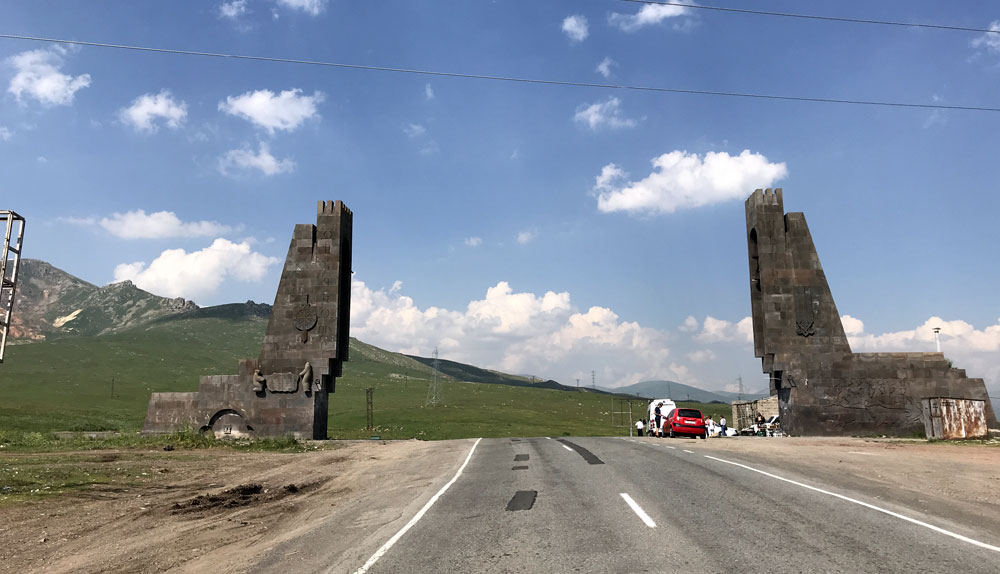 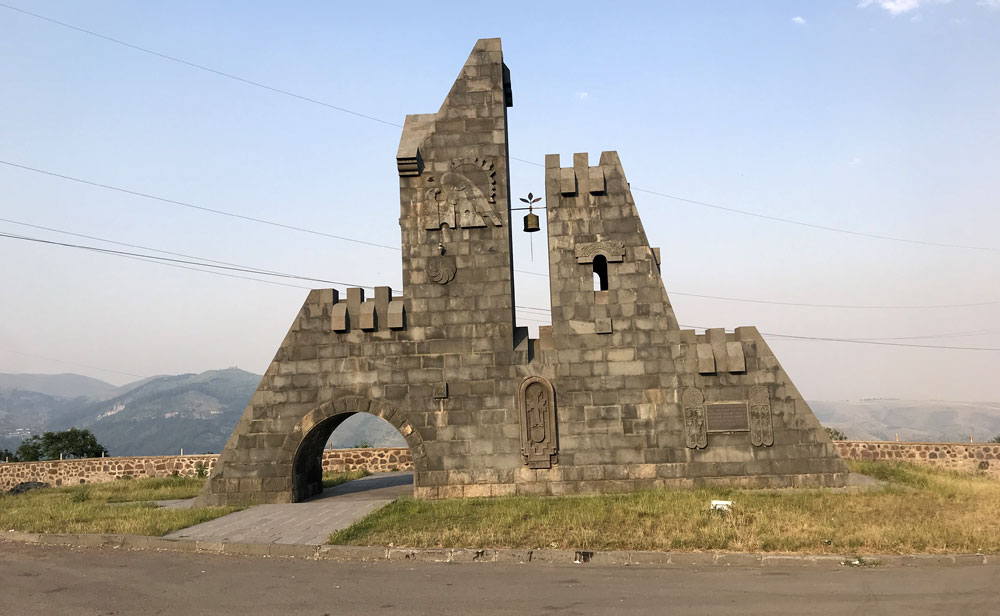 Final hour of driving brought us to this sleepy, tiny town of Goris in the south of Armenia. This is a starting point for anyone to visit Artsakh. We stopped by the southern edge of town to see the caves across the valley. And then checked in to our hostel, before heading out for dinner at the northern end of the town, while stopping at a bakery! 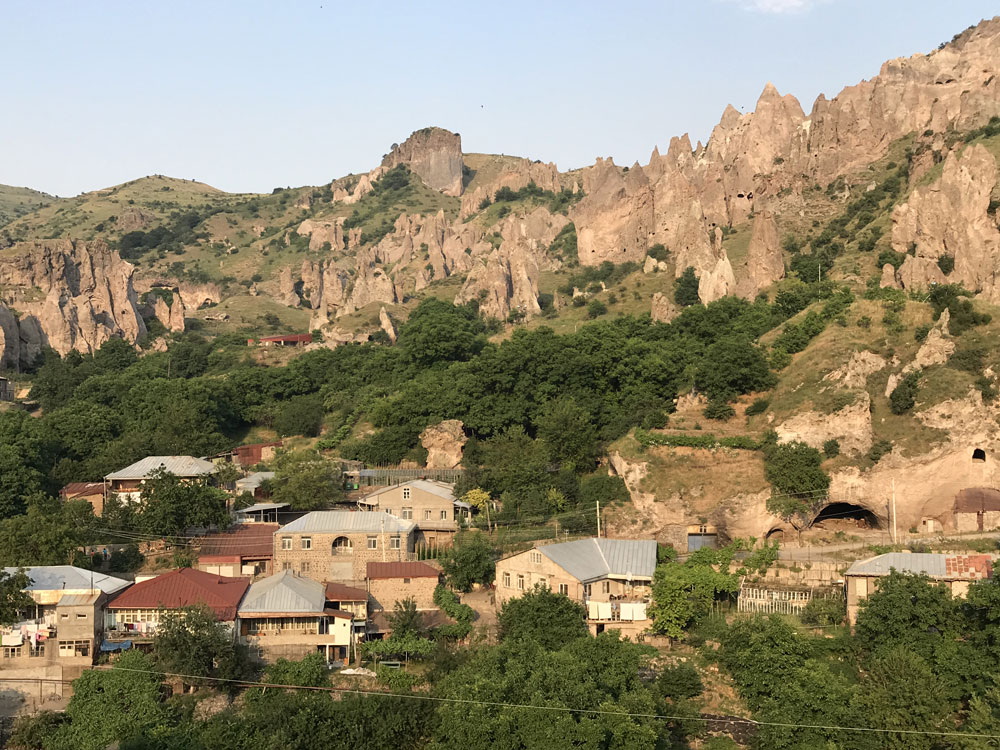 [Caves along the mountains in the valley at Goris] 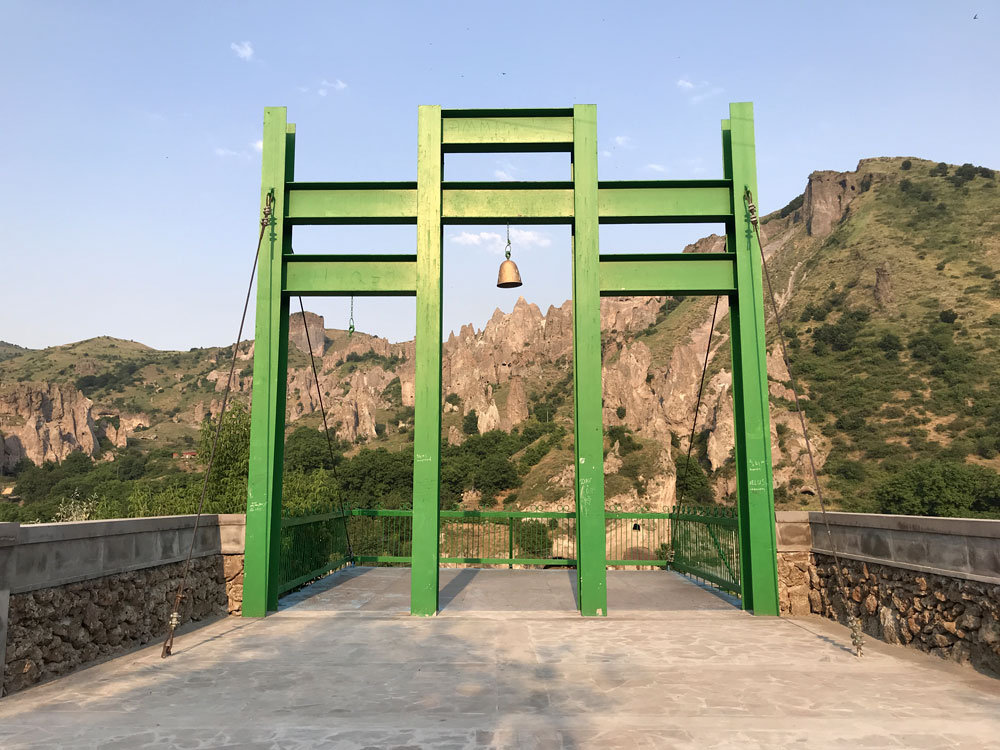 [Viewing platform to see the caves across the valley at Goris] 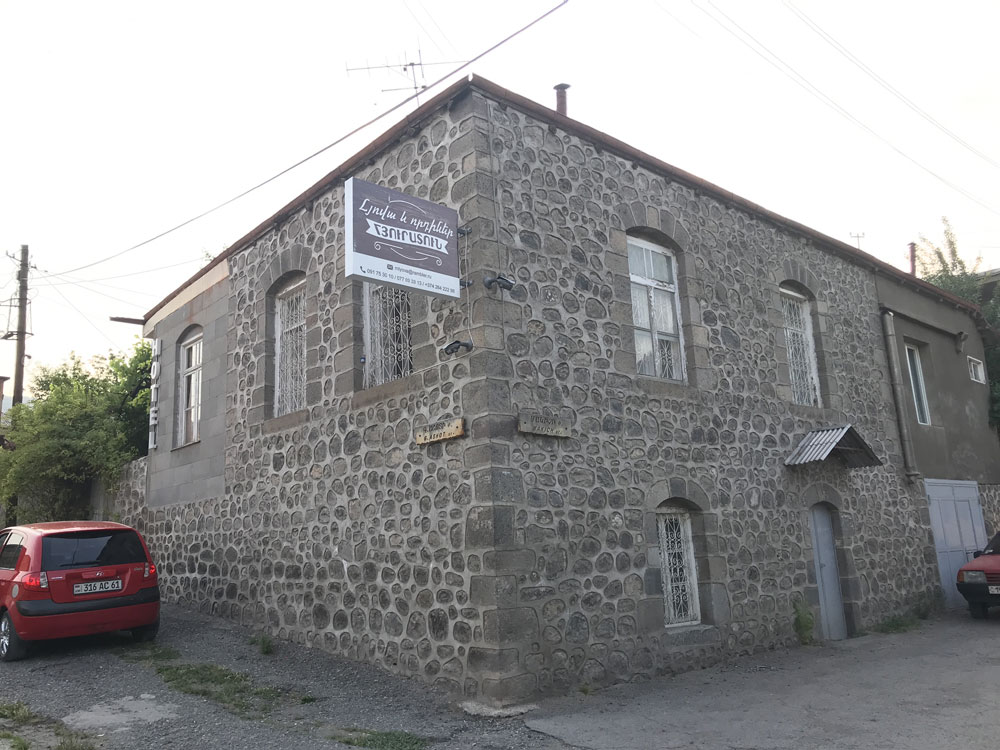 [Typical stone houses of Goris; and our hostel] 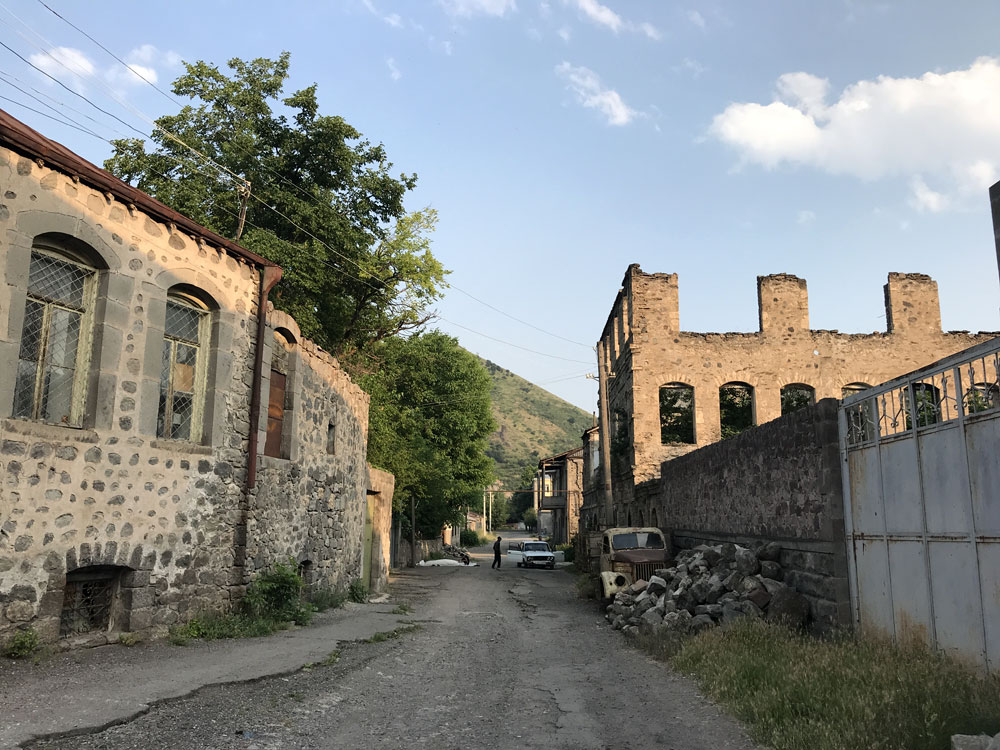 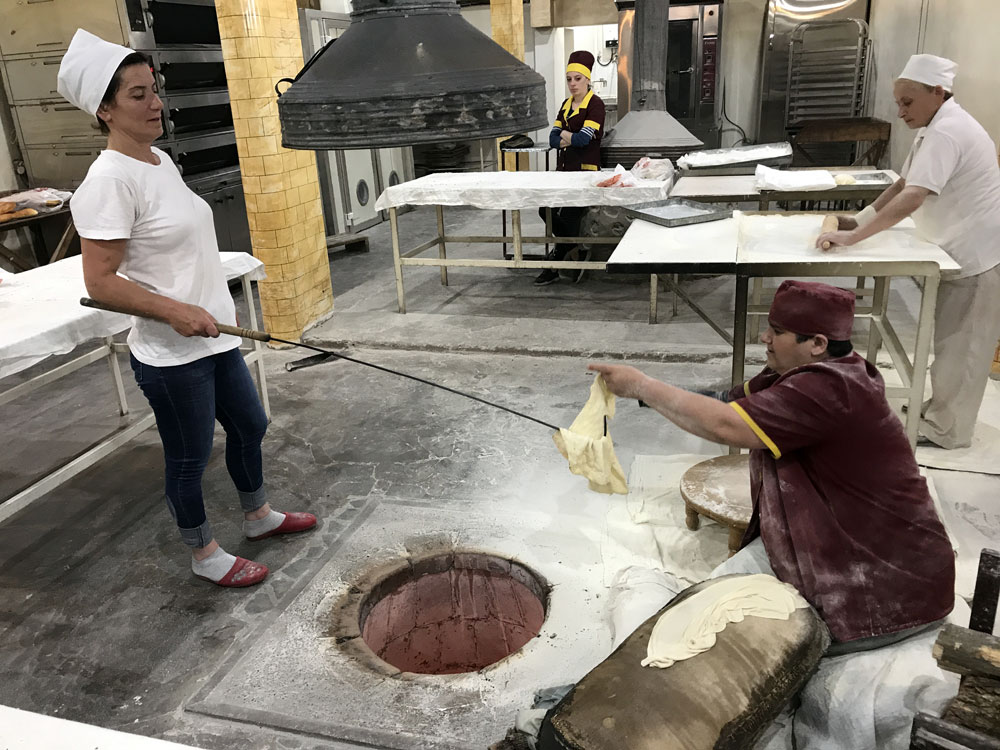 [Fresh Lavash being prepared at a bakery in Goris]