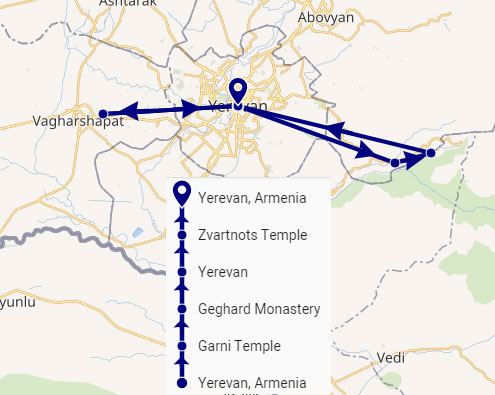 The three places of attraction close to Yerevan are Garni Temple, Geghard Monastery and Zvartnots Temple. These are at short distances from the capital and can be accessible by public transport (well, kind of!) unless you are 3-4 persons, then I’d recommend getting your own private taxi.

My first destination is 29km (or 18 miles) east of Yerevan – Garni Temple. The easiest, and perhaps the cheapest way, to reach Garni Temple is taking a marshrutka from the Gai bus station, or famously called as the “Mercedes Benz” bus station (because of the huge Mercedes Benz showroom next to the bus stop). And although there are marshrutkas running between Republic Square to Gai bus stop, everyone you ask for the information will recommend getting a taxi because it’s not expensive!

Republic Square to Gai Bus stop
So after breakfast at the hostel Bivouac, I called for a taxi using the Yandex.Taxi app and headed to the Gai bus stop. It costs AMD 700-1000 depending on the traffic to reach Gai bus stop from Republic Square. It was Sunday morning, so the streets of Yerevan were empty, taking about 10 minutes to reach Gai.

Gai Bus stop to Garni Temple
The bus stop hardly looks like one! There are people waiting on the sidewalk for the bus and there are no signs posted about the place being a bus stop. The Gai bus stop is also called the Garni bus stop because most marshrutkas starting from here go to the town of Garni. I took marshrutka number 286, but always ask the locals if the sign boards on the buses are in Armenian. 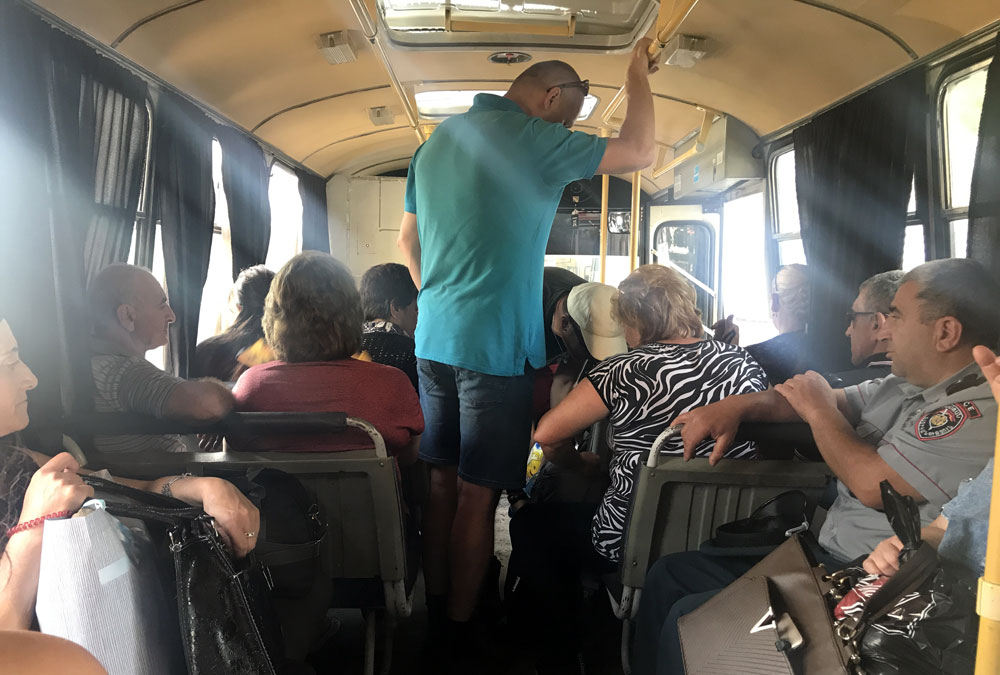 [Inside a marshrutka from Gai bus stop to Garni]

It takes about 30 minutes from Gai bus stop to reach the last stop in Garni, and costs AMD 250 (approx $0.50). Upon reaching the bus stop, you have to walk for 5 minutes to the entrance of Garni Temple.

Once a pagan temple dedicated to the Armenian sun god Mihr, Garni Temple is built in the middle of the 1st-century, and it remarkably survived the destruction of pagan temples following Armenia’s conversion to Christianity in the 4th century, and countless invasions and earthquakes until its collapse in 1679. After continuous excavations in the late 19th and early 20th centuries CE, the Temple of Garni was reconstructed between 1969-1975. Today, it is the only free-standing Greco-Roman structure in Armenia and seen by many as a potent symbol of Armenia’s classical past as well as its deep historical ties to the civilizations of Greece and Rome. 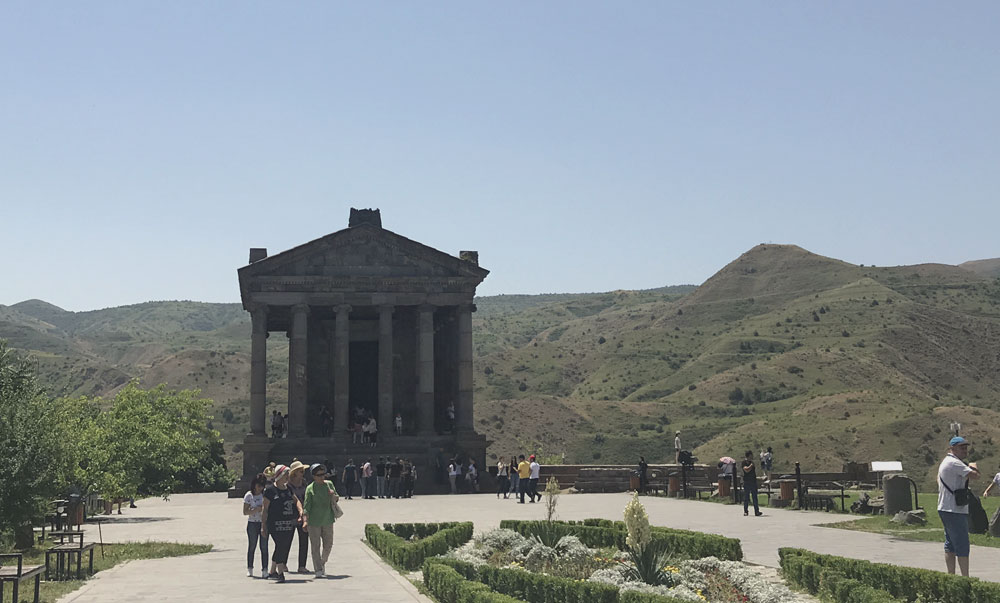 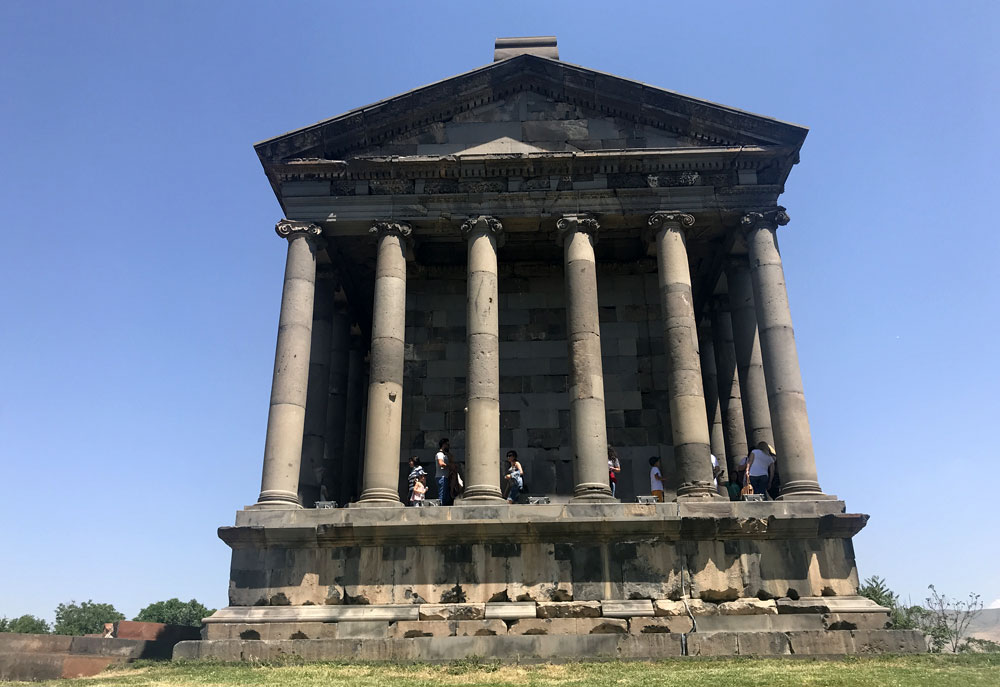 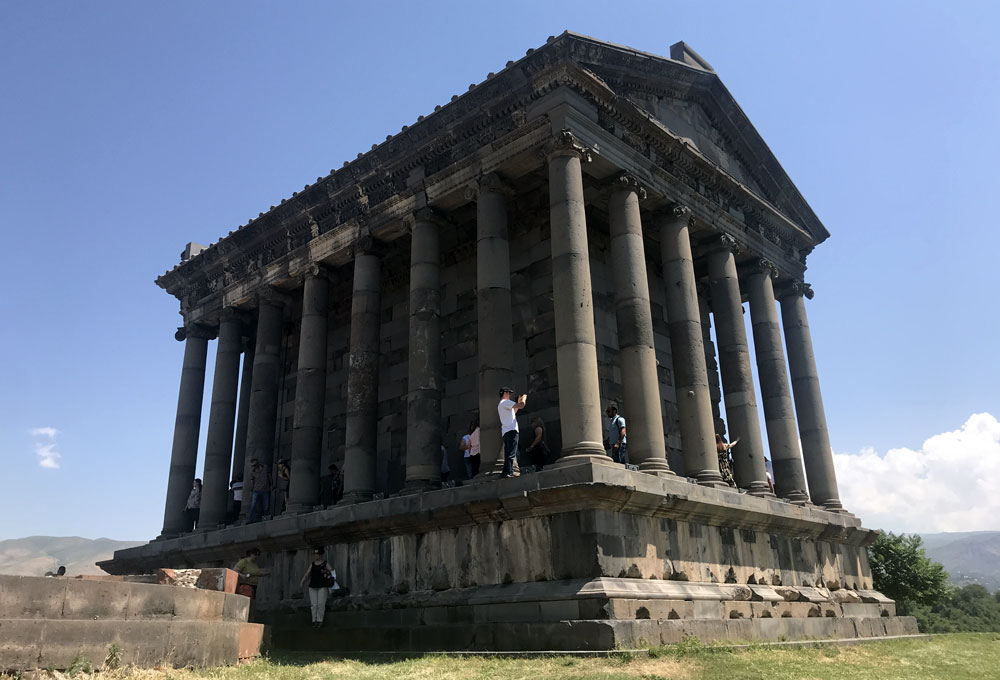 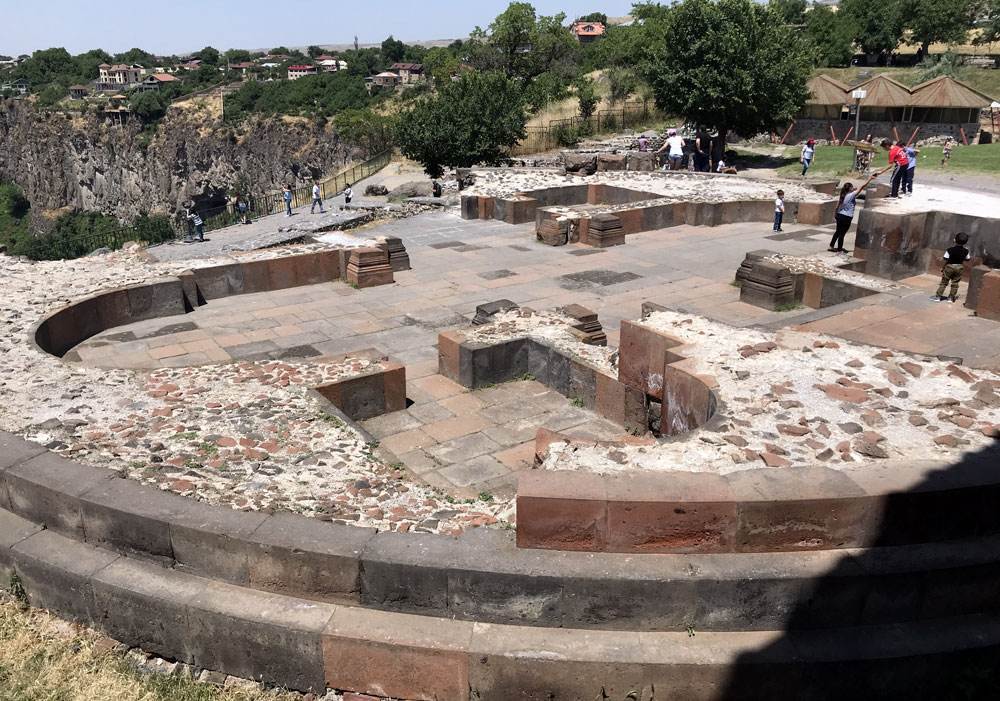 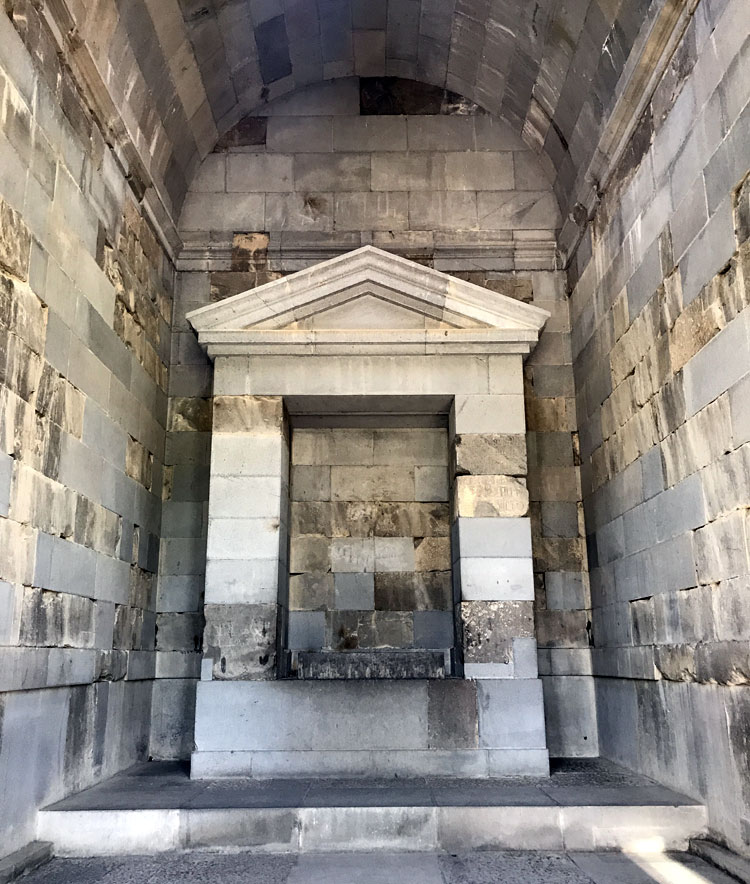 The only way to reach Geghard Monastery from Garni is to take a taxi. Most rates go at AMD 3000-5000 return trip, but I took a Russian-era Lada taxi driven by this 80-year old man asking for AMD 2000 return trip! 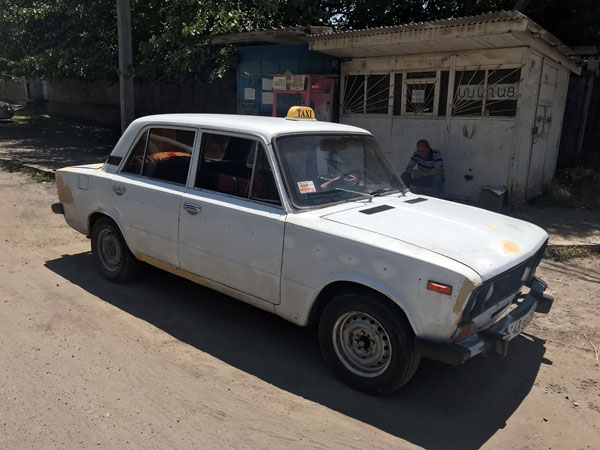 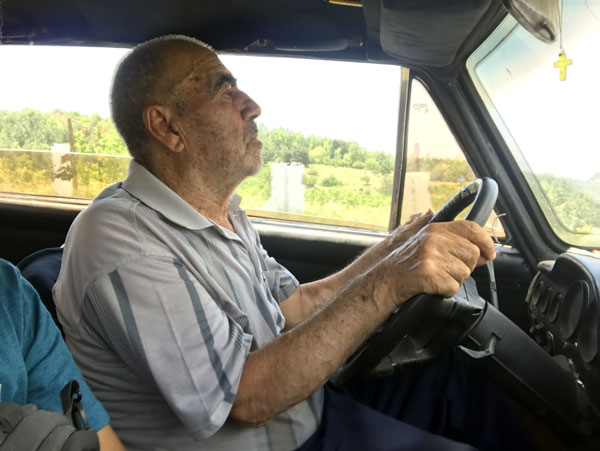 The entry to the monastery is free (all churches and monasteries in Armenia are free!). Located along the river Azat gorge to the northeast, is Geghard monastery or Geghardavank well-known for its rocky sights. The half of the monastic complex is indeed cut from granite monolith. The other half consists of natural grottoes and caves which were used as cells. The monastery was founded (presumably) in the 4th-century by the First Catholics of Armenia – Gregory the Illuminator and originally named Airivank.

It was repeatedly exposed to the attacks of Arabs and Seljuk Turks who burnt it down in 923. Not a single original monastery structure has survived.

In the 12th – 13th centuries thanks to the efforts of Armenian princes of Zakaryan and Proshyan families new cult structures were erected. Then the monastery was named Geghardavank – the Monastery of Spear. According to the legend, St. Thaddaeus brought the spear with which the Roman soldier had pierced the heart of crucified Christ, the so-called Spear of Destiny (now the spear is kept in the first capital Echmiadzin).

The structures of the monastery are surrounded by the mighty fortification and consist of the main church – Katogike, two cave churches – Avazan and the St. Mother of God, and the princes’ tombs. The monastery court yard hosts the cells, refectory, and other premises. The territory of Geghard is known for a holy water spring. Behind the monastery walls there is the oldest structure – St. Gregory semi-cave church of the 12th-century as well as a number of cave khachkars.

The interiors of the temples and cells richly decorated with ornaments and bas-reliefs, the tombs of aristocratic families and other masterpieces of underground architecture have designated by UNESCO as World Heritage Site. 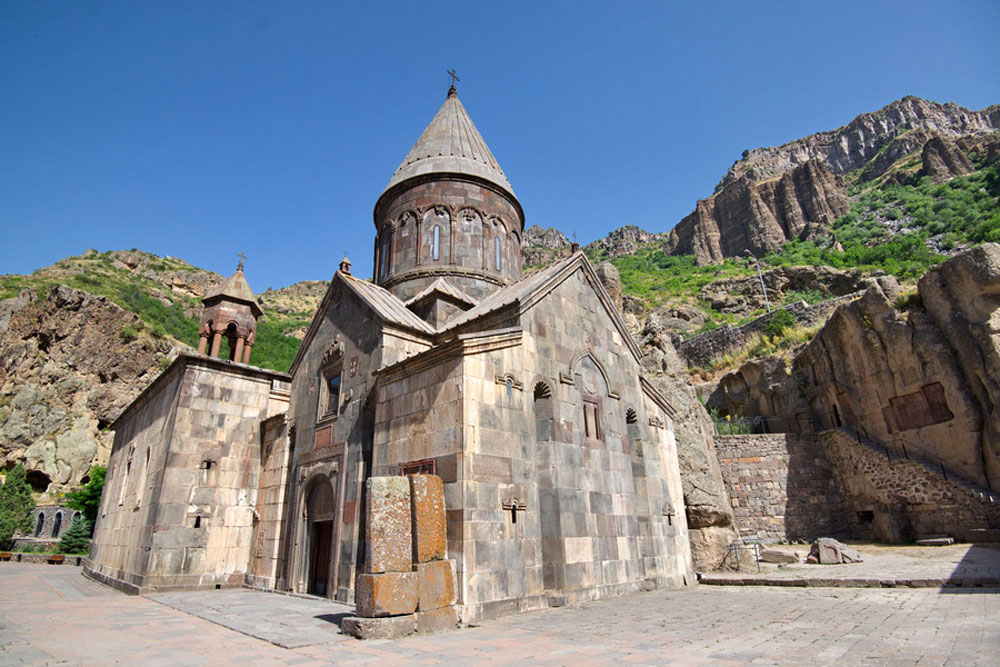 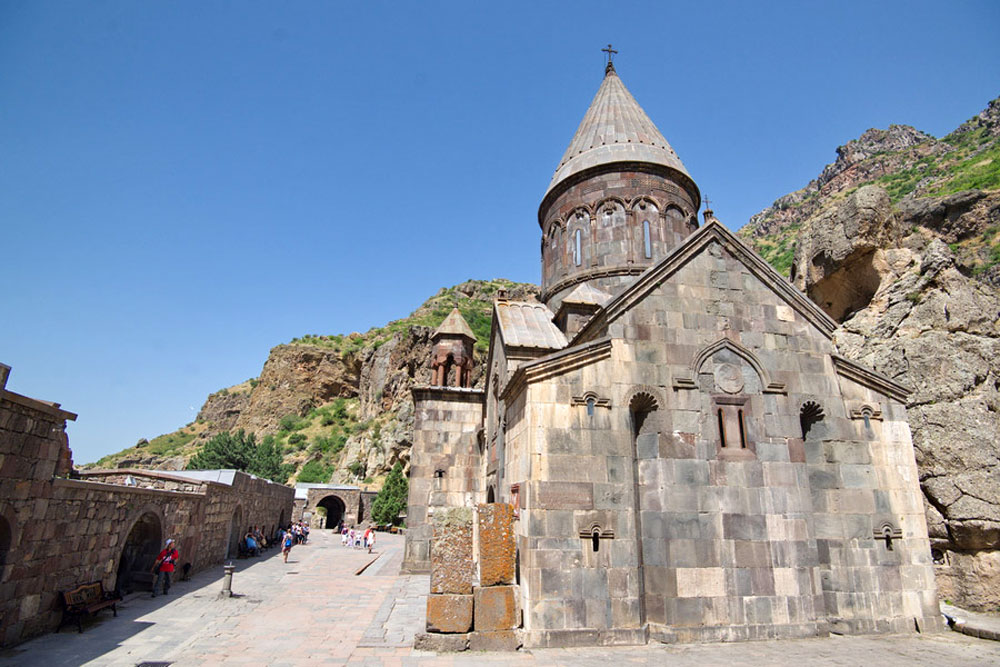 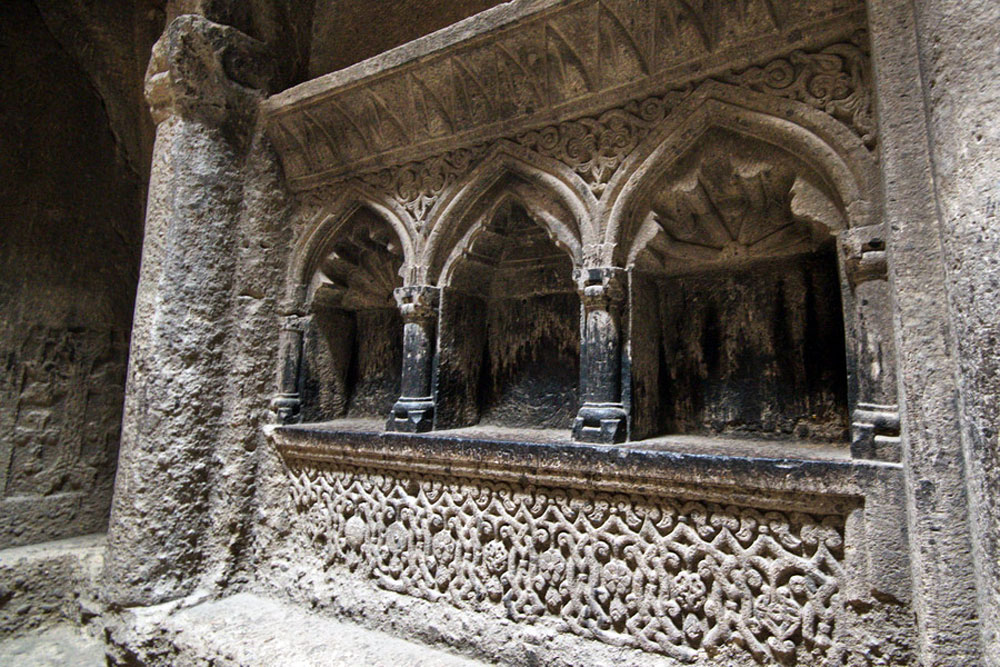 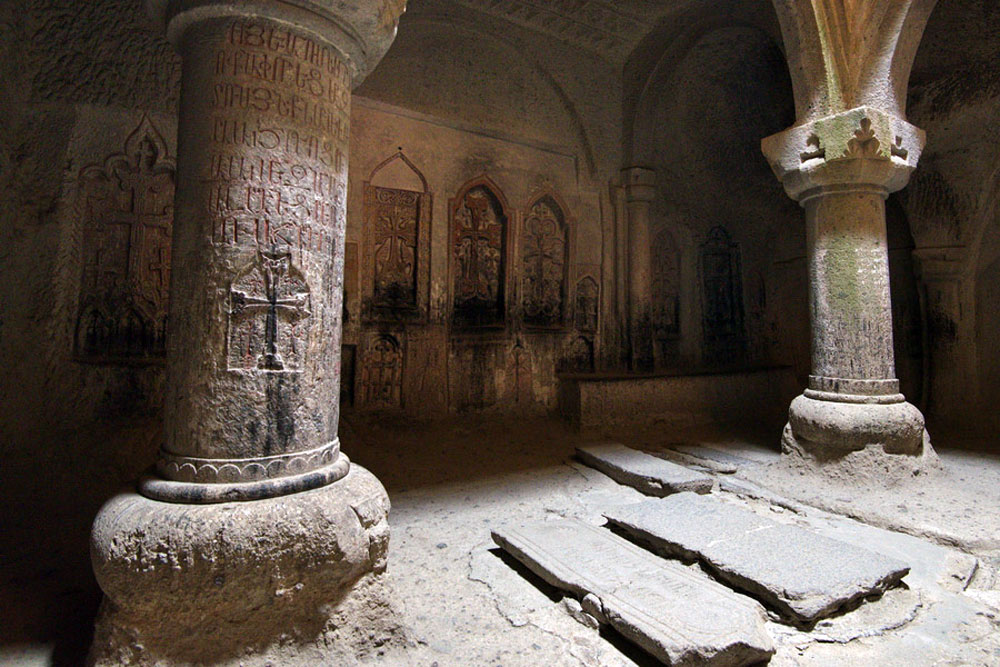 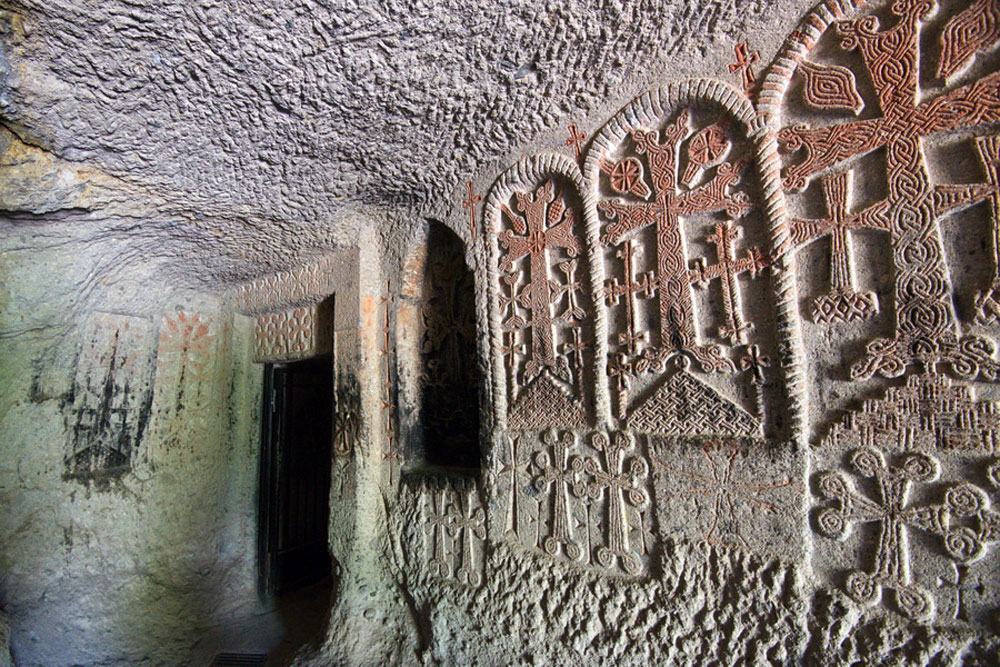 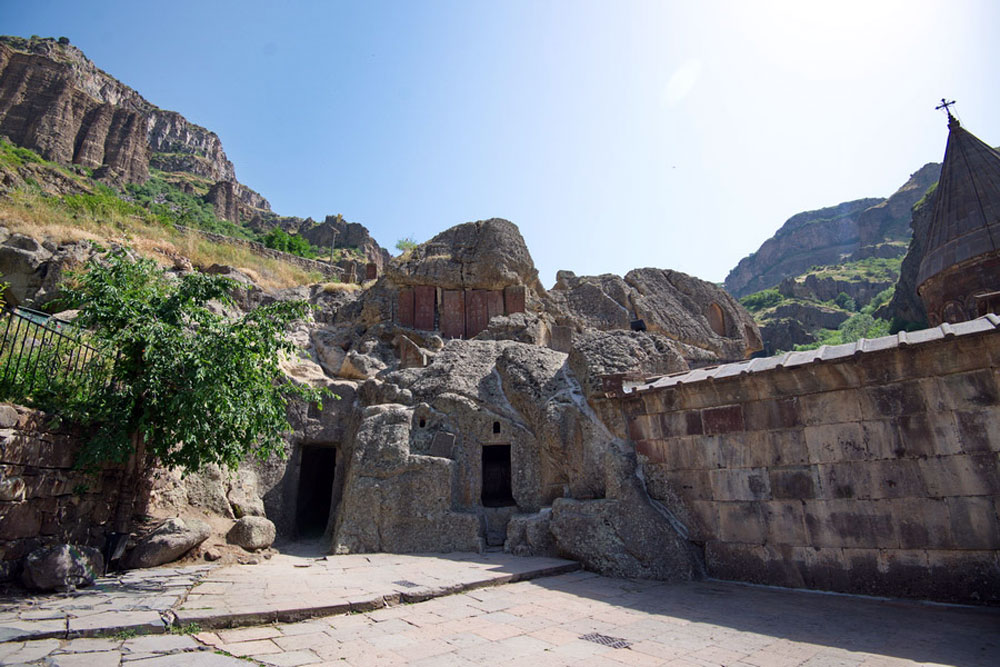 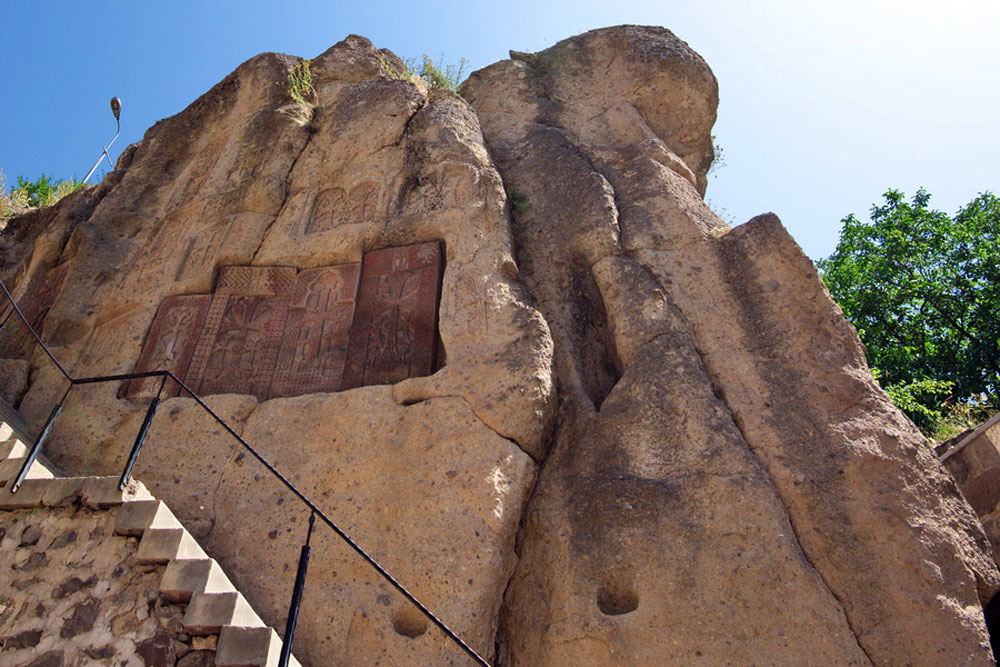 Headed back to Garni in the same Lada taxi, and took the marshrutka to Gai bus stop from Garni.

Although there might be shared taxis or marshrutkas from Gai bus stop to Republic Square or to Zvartnots Temple, which is about 20km west of Republic Square, I decided to take a taxi using the Yandex.Taxi app (disclaimer: I do not get paid for mentioning the app, nor do I have any affiliations in any way. Just mentioning the app because it’s one of the cheapest and most reliable way of taking a taxi in Armenia) to Zvartnots which cost me AMD 1800 one-way.

One of the biggest landmark of medieval Armenian architecture is the magnificent Zvartnots Temple constructed in the 7th century. It was completely destroyed by powerful earthquake in the 10th century and today, the ruins of this temple give us the idea of its rare and majestic beauty.

It used to be a three-storied round temple of 49 meters in height consisting of three differently sized cylinders put against on top of each other crowned with a spherical pyramid-shaped cone. The temple stood on a platform surrounded by stepped pedestal which has partially survived.

From top to bottom the temple was decorated with the magnificent stone carving. The intricate ornament framed the eaves and braided the window apertures. The temple’s walls were decorated with grapevines, branches of a pomegranate, the finest geometrical patterns.

Zvartnots had stood for more than three hundred years and around 930 was destroyed by the earthquake. As researchers found the architect of the temple did not manage to transfer the entire weight of the top levels on the four powerful pylons which served as the main supports; as the result the part of the load was applied on the arches and the temple’s vaults. It was the weakness of the building’s design and the mighty earthquake tore it apart.

The ruins of Zvartnots Temple are designated by UNESCO as World Heritage Site. 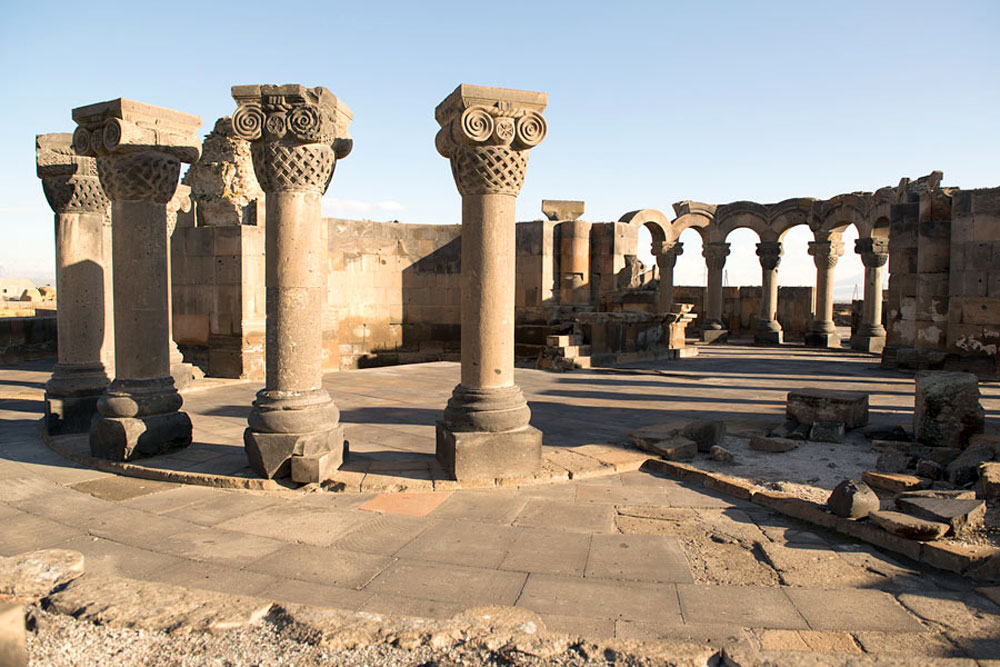 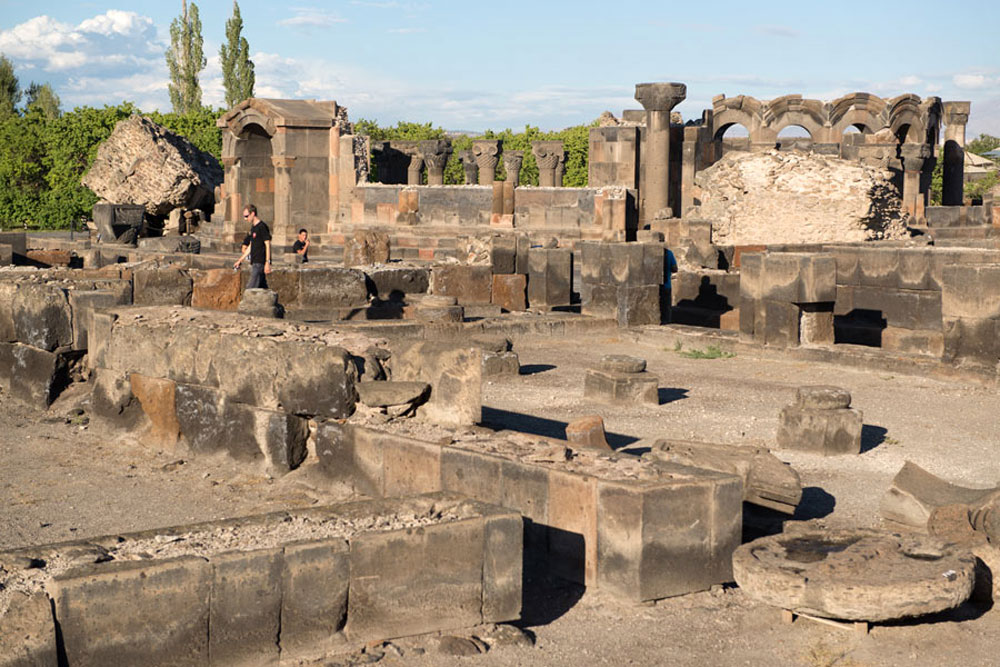 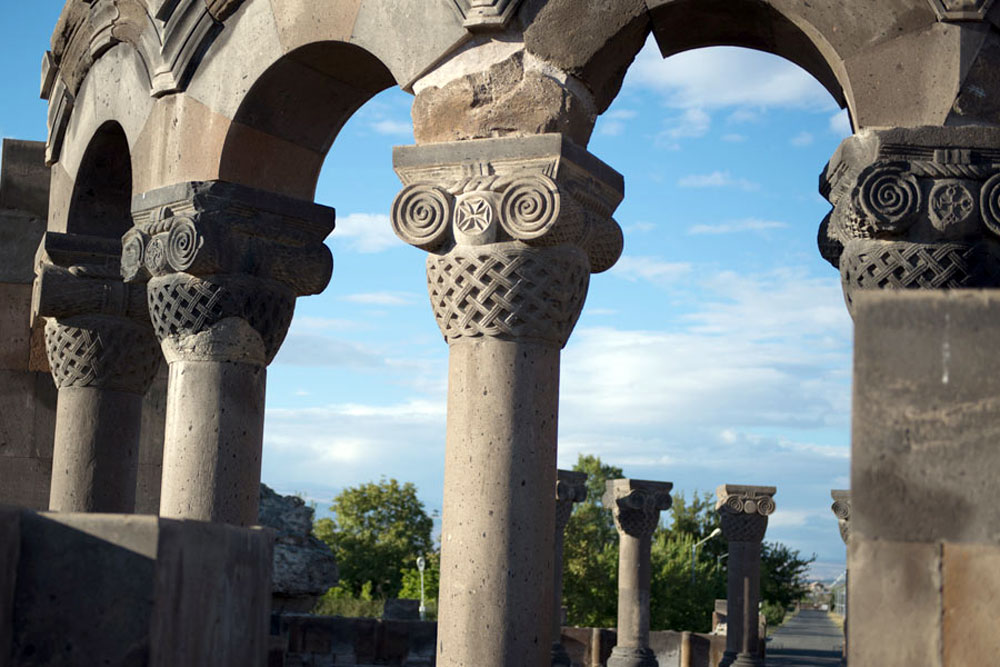 With a full day of commuting and visiting all the three sights, it was about 6pm when I got back to the hostel. And after some coffee and siesta, I headed out for a walk to the Cascade for a night view, before stopping by a local bakery for dinner and calling it a night on my last day in Yerevan. 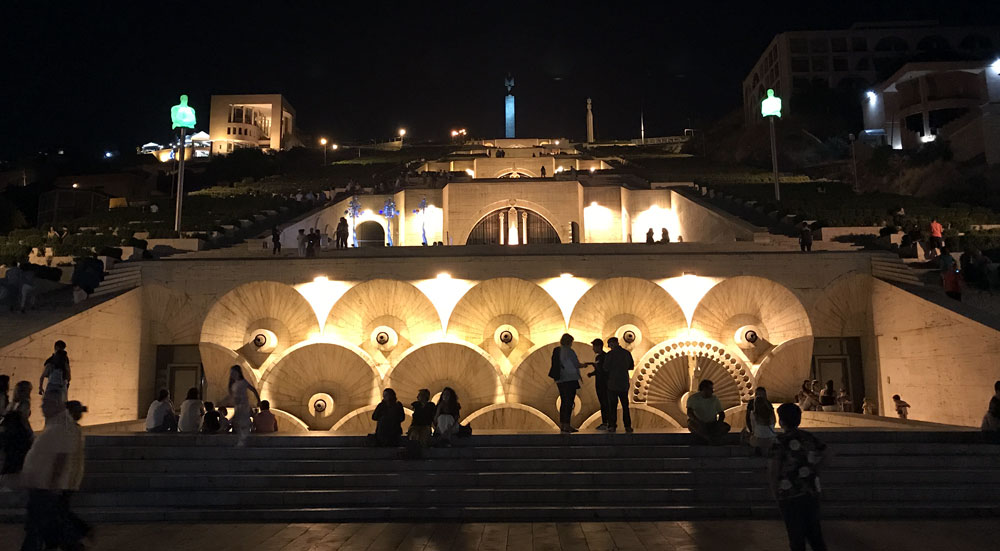 [The Cascade in Yerevan at night]

Visiting some of the sights in south Armenia.