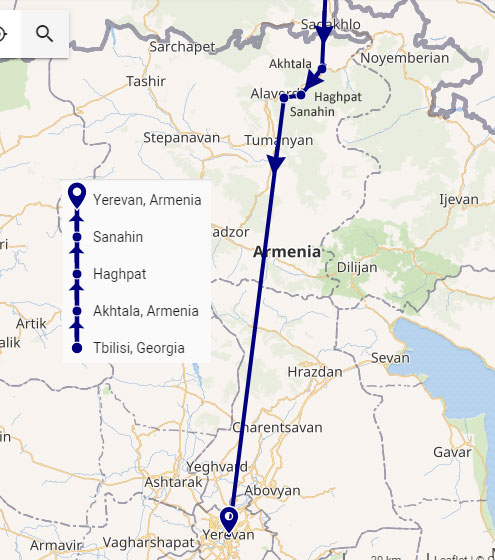 Arriving in Armenia (via Georgia)

I traveled to Azerbaijan before coming to Armenia, and since the borders between the two countries are closed and considering they are “at war” over the disputed territory of Nagorno-Karabakh or Artsakh, there are no direct flights between Azerbaijan and Armenia. Most flights go via Georgia and can be expensive. The cheapest way to travel between the two countries is on a train via Georgia. And then taking a shared taxi to Yerevan.

A night train from Baku, Azerbaijan to Tbilisi, Georgia runs everyday starting at 20:40 from Baku, reaching next morning around 09:00 to Tbilisi. And that’s the train I took!

Having reached Tbilisi’s central station, there are 2-3 options to take a shared bus or taxi to Yerevan as explained in this amazing article by Megan Starr. Since I was already at the train station, it was easy for me to take a shared marshrutka from there.


Right outside Tbilisi central station, in one corner is a trailer parked with “Yerevan” mentioned on it. Get out of the station at its lowest level, walk to the right and you will see this trailer standing there. Shared marshrutkas leave every 2 hours starting at 9am until 4pm and takes about 6 hours (including border posts times) to reach Yerevan. It costs 35 GEL (approximate $12.30) per person, one way.

It was just past 10am and the next one was to leave at 11am, so I stopped by the food court on the top-most level of the station to grab a bite before I sit in the marshrutka for the long journey.

It was a hot and humid morning in Tbilisi and the marshrutka didn’t look like a comfortable ride with about 9-10 people packed in. After I got back to the waiting ride, I met three other travelers who didn’t seem comfortable to take that marshrutka, so we asked a few taxi drivers around and one of them agreed to take the four of us for a price of $100. This meant paying double the price of marshrutka ($25 per person), but going comfortably! A quick and easy decision was to pay that double price and not just start immediately, but we could make our stops along the way – to Haghpat and Akhtala monasteries.

Right after crossing the border into Armenia, in about 30 minutes we stopped by the 10-century fortified church monastery in the town of Akhtala. Although the monastery is inactive now, the church is among the most well-preserved in Armenia. The amazingly artistic frescoes of the church covering the inside walls are what the church is famous for. The murals are the one of the best representations of the Byzantine art, painted in early 13th century and some of them are renovated in 1979. 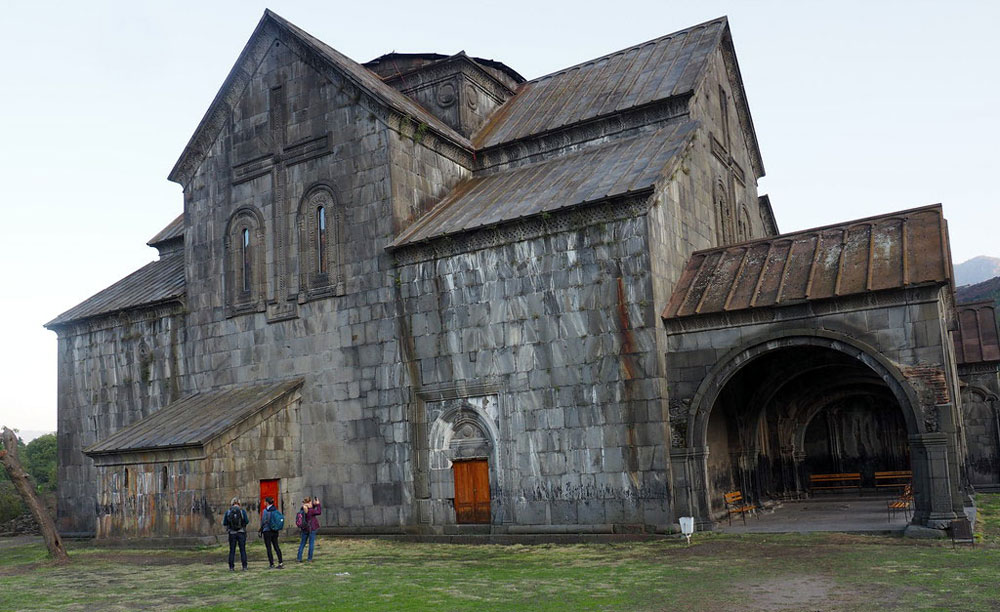 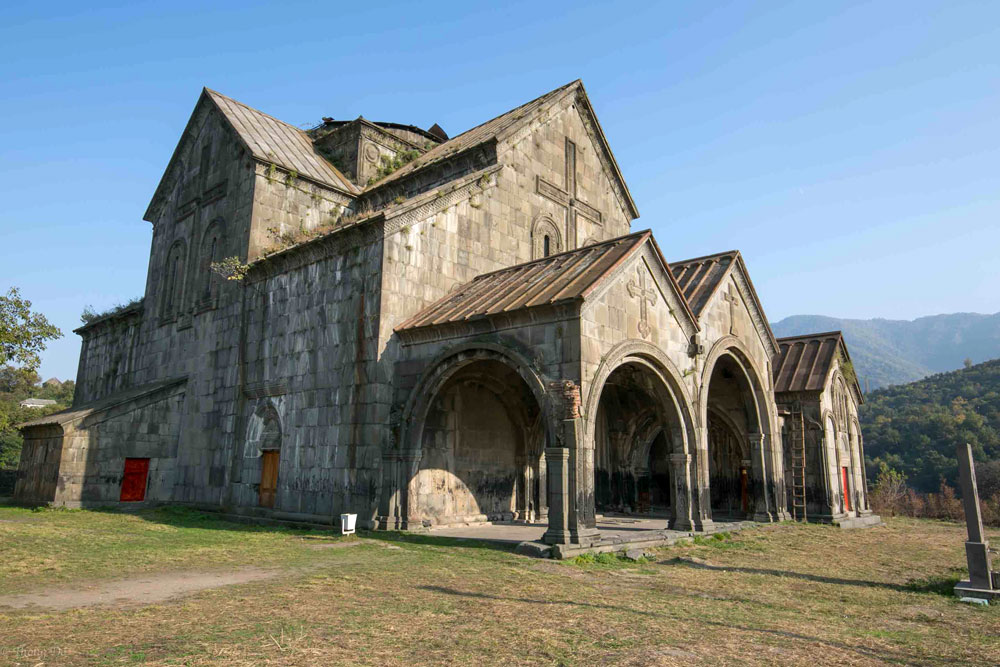 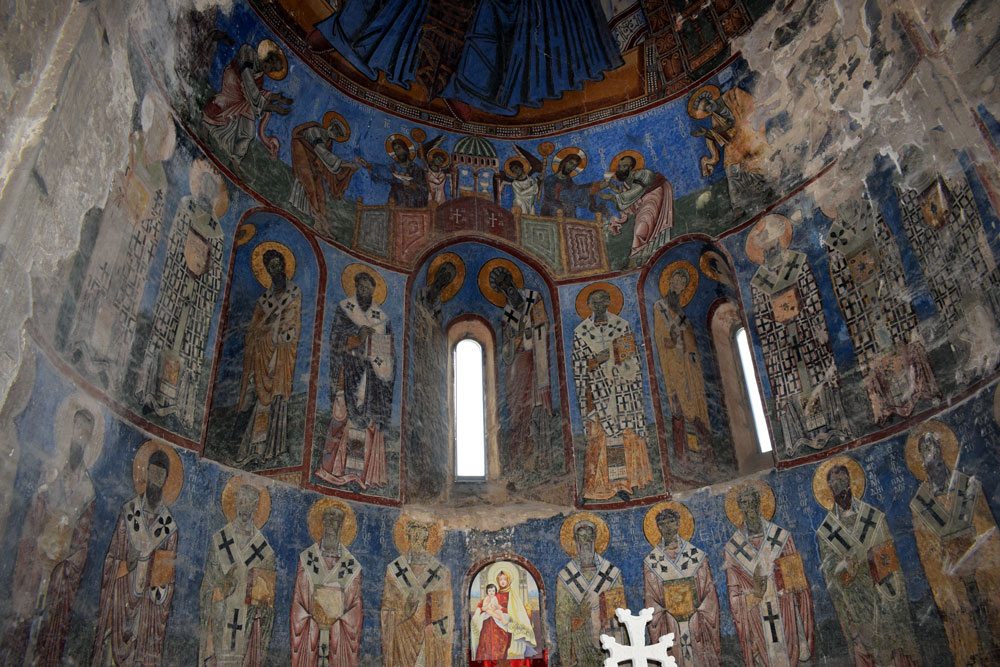 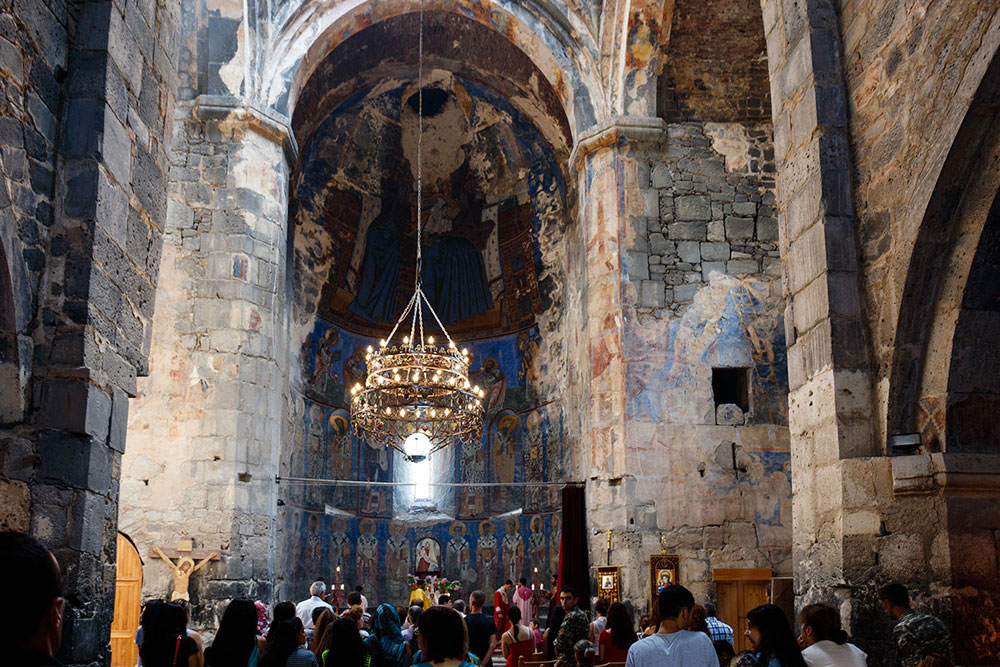 Another 30 minutes drive south brought us to the UNESCO World Heritage site of Haghpat Monastery.

This 10th-century monastery includes Saint Nshan, Saint Grigor and Saint Astvatsatsin churches, courtyard, repository, bell tower, table-house, chapel tombs and many Khachkars (cross-stones). The complex was surrounded by high barriers for protecting from enemy’s attacks. In that area were created defense bases, shelters, and other buildings. 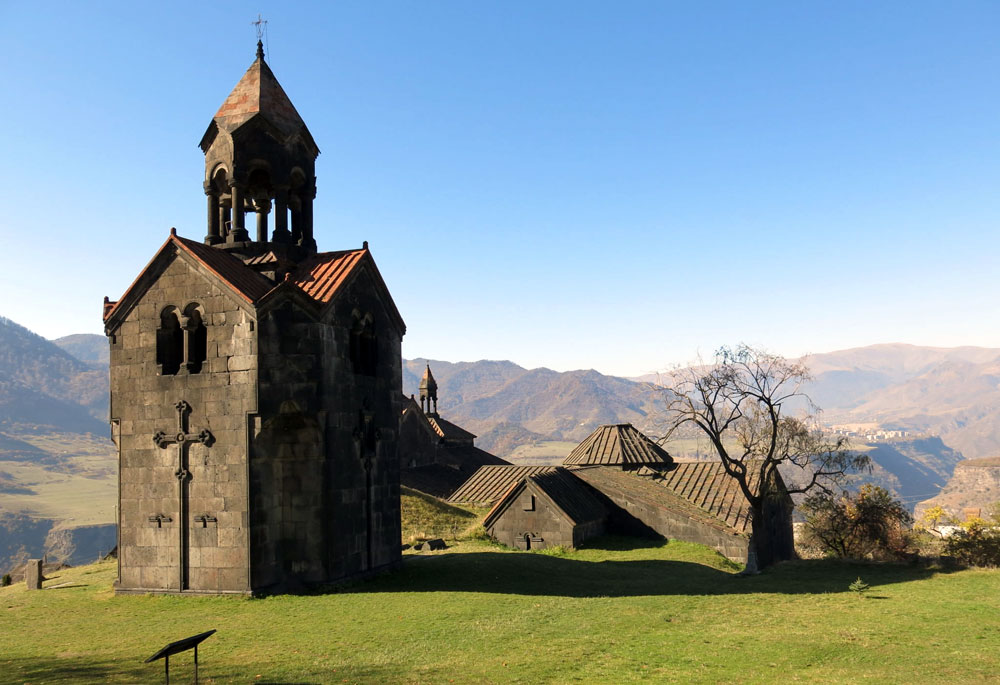 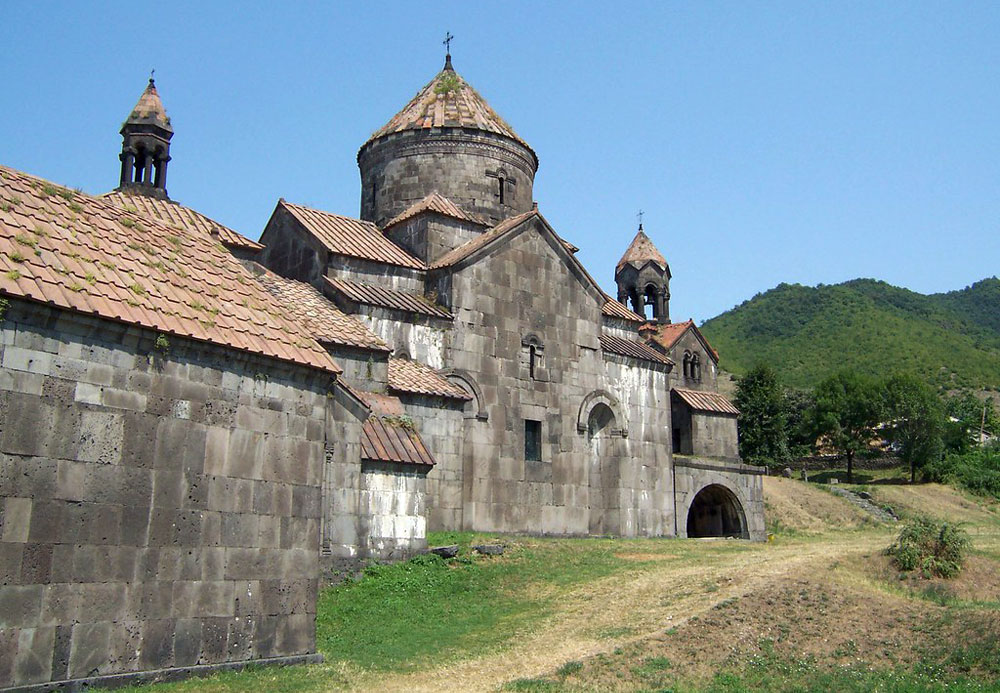 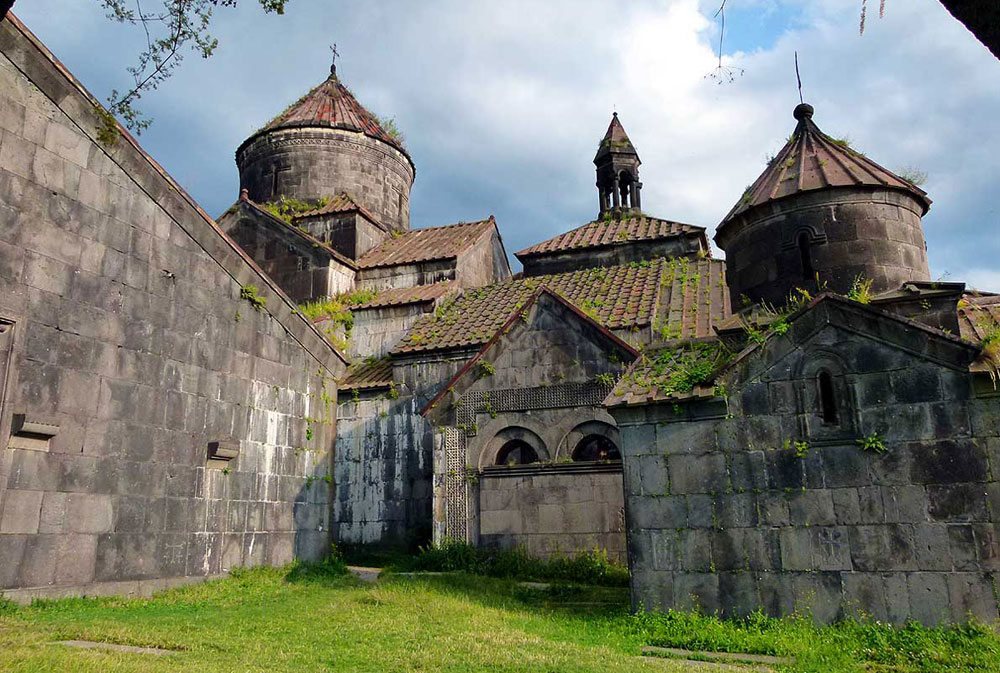 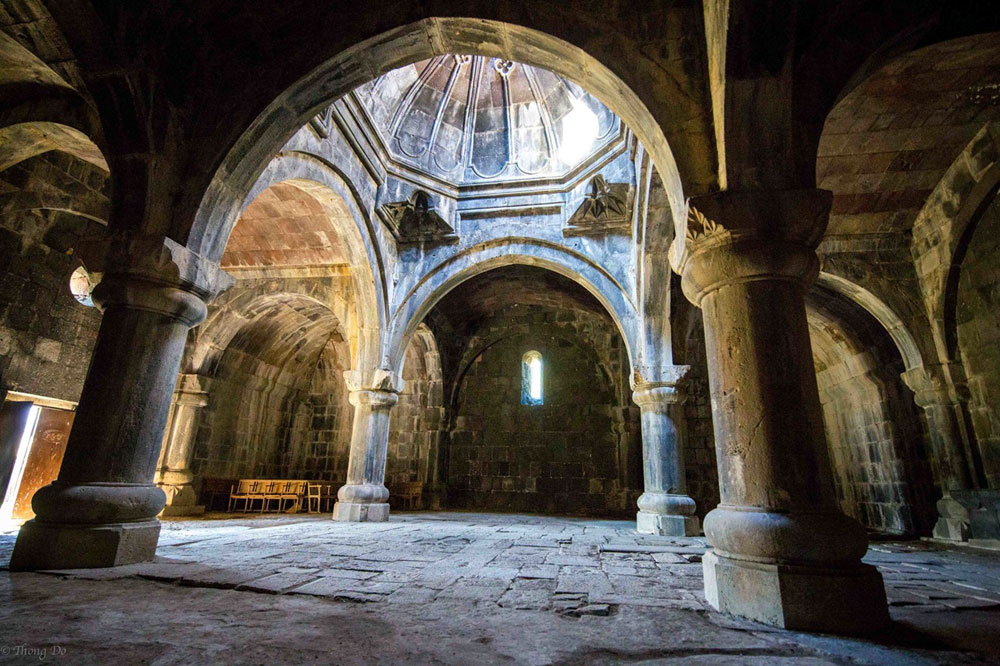 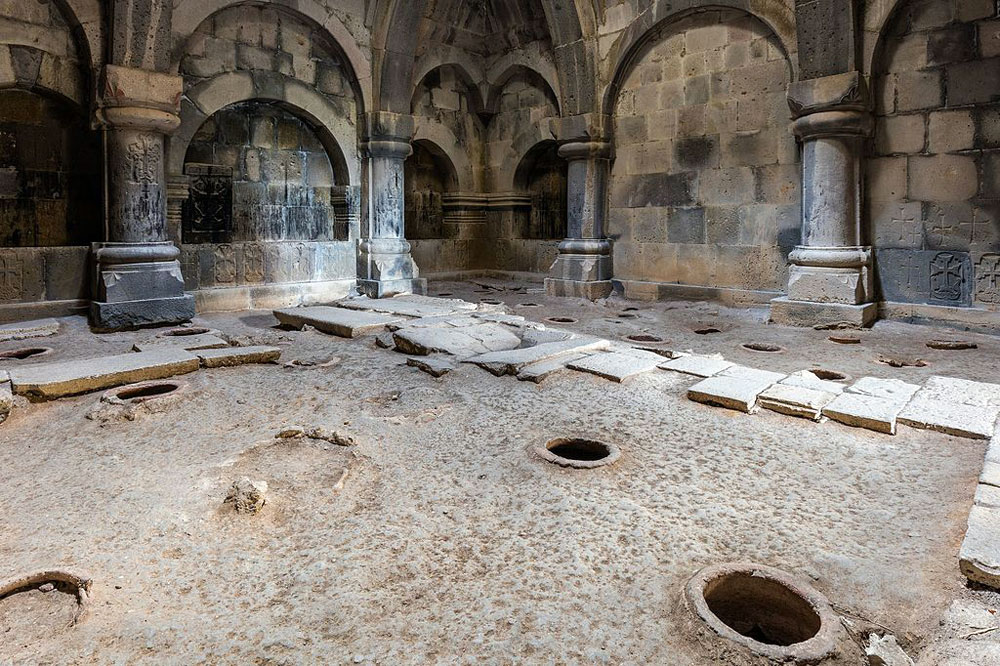 Another 30 minutes drive through the hairpins of mountains south brought us to this another UNESCO World Heritage site of Sanahin Monastery. The name Sanahin literally translates from Armenian as “this one is older than that one”, presumably representing a claim to having an older monastery than the neighboring Haghpat Monastery.

The two villages and their monasteries are similar in many ways, and lie in plain view of each other on a dissected plateau formation, separated by a deep “crack” formed by a small river flowing into the Debed river. 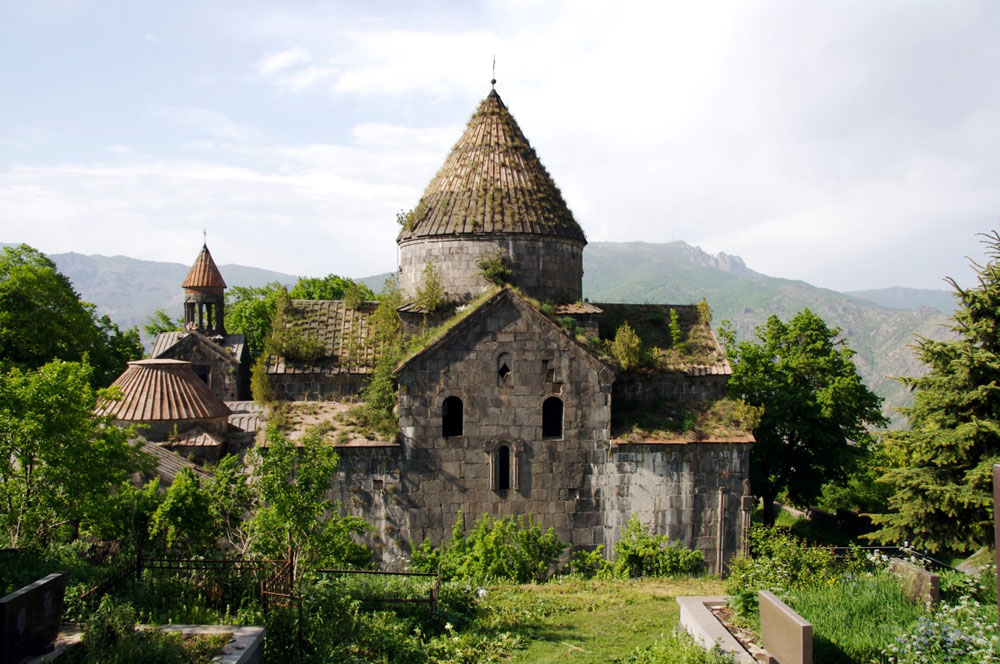 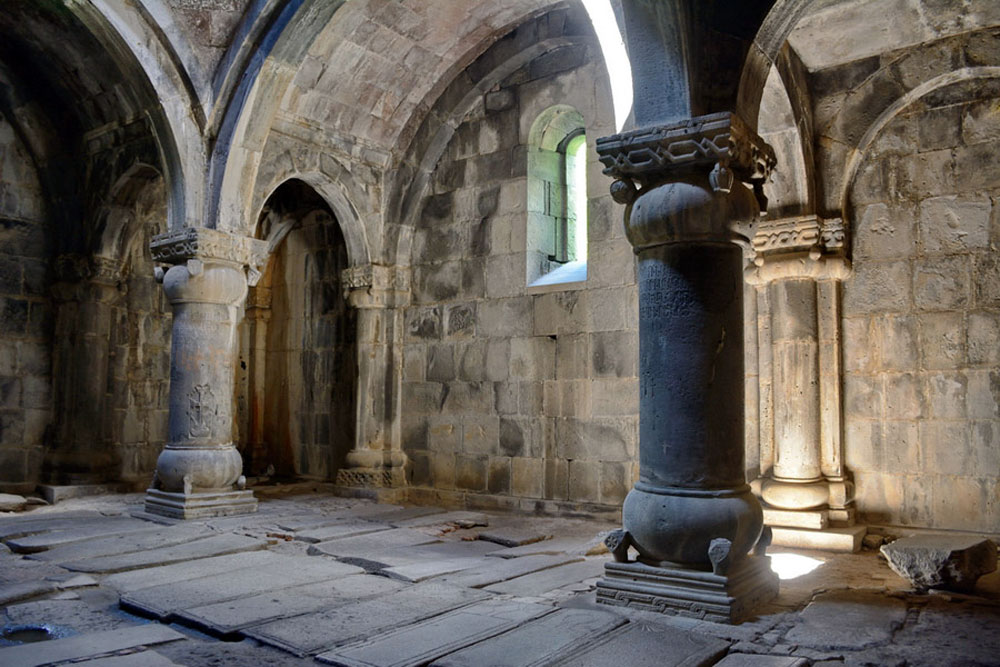 [Pano of inside Sanahin Monastery]

It was close to 3pm when we started from Sanahin Monastery to the capital city of Yerevan. And another 3+ hours of driving (and quick breaks for toilet & snacks) brought us to the Republic Square in Yerevan. 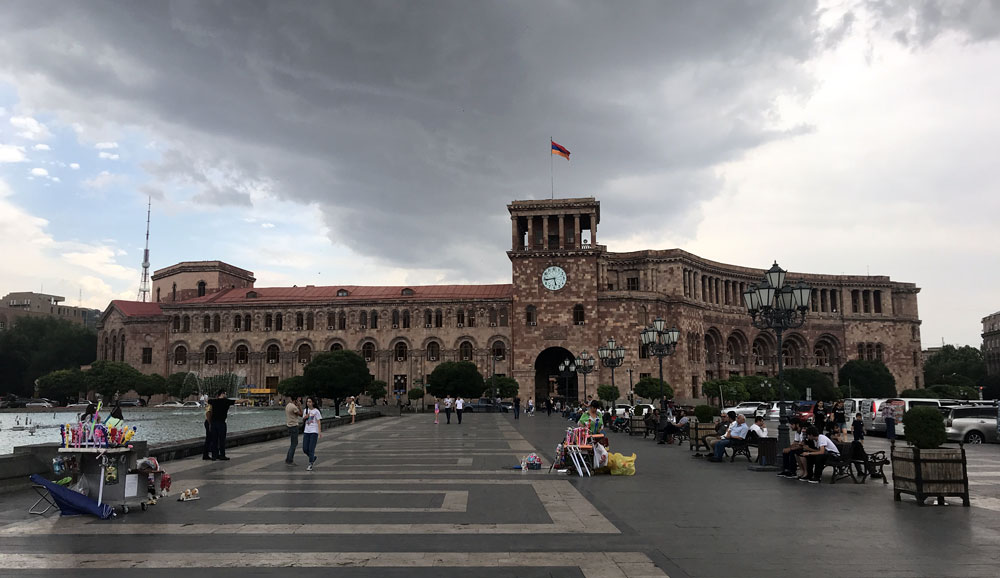 We paid the taxi driver and walked another 10 minutes to our hostel just west of the square – Hostel Bivouac. A quick checkin and a shower after we headed out to grab some quick food at the square. After many recommendations from fellow travelers, we decided to have dinner at Tavern Yerevan, but it requires reservations (which we did for next day!). So we went right across the street to “Kavkazskaya plennitsa” restaurant.

The receptionist at the hostel had directed me to the UCom cellphone office right next to the restaurant, where I stopped by to get a local SIM card and data plans. It was a quick 10-minute process – select plan, show passport, add SIM & activate and you’re out!

Walking back after dinner, we called it a day!