The eastern province of Moldova, called Transnistria, declared independence from Moldova in 1990 before the fall of the Soviet Union. Officially known as ‘Pridnestrovie Moldovan Republic’ (PMR), Transnistria has pledged allegiance to Russian Federation and has its own border controls, currency, flag and government. Moldova has no control over this tiny nation, which is not recognized by any other country in the world. Well, except for the other two breakaway ‘nations’ of Abkhazia and South Ossetia.

The city of Tiraspol is the de facto capital of Pridnestrovie (as its locally called) and the biggest city in the country. Considering the unrecognized status of this country, there are no embassies anywhere in the world, so any traveler can visit Pridnestrovie and have to clear immigration at one of the many border checkpoints with Moldova and Ukraine.

Entering Pridnestrovie (Transnistria)
Unless you’re a long-term traveler, you can see most of the sights in Tiraspol within a day trip. And most travelers reach Tiraspol from Chisinau, the capital city of Moldova. I took the marshutka (a minivan that holds about 15 people) from Chisinau to Tiraspol from the Central Bus Station in Chisinau. The bus station is located off of the main street – Stefan Cel Mare, right behind the Central Market (Piata Centrala). Walk past the central market on Strada Tighina and go to the norther corner as shown in this picture. Here’s the schedule of buses between Chisinau & Tiraspol.

Here you will find marshutka that has the board in the windshield saying Tiraspol in Cyrillic alphabet (Тирасполь). Go to the ticket window right in front of the bus and get the ticket for MDL 37 (approx $2.20 in October 2018 rates). Including immigration, it takes about 2 hours to reach Tiraspol.

[Marshutka to Tiraspol at Central Bus Station in Chisinau] 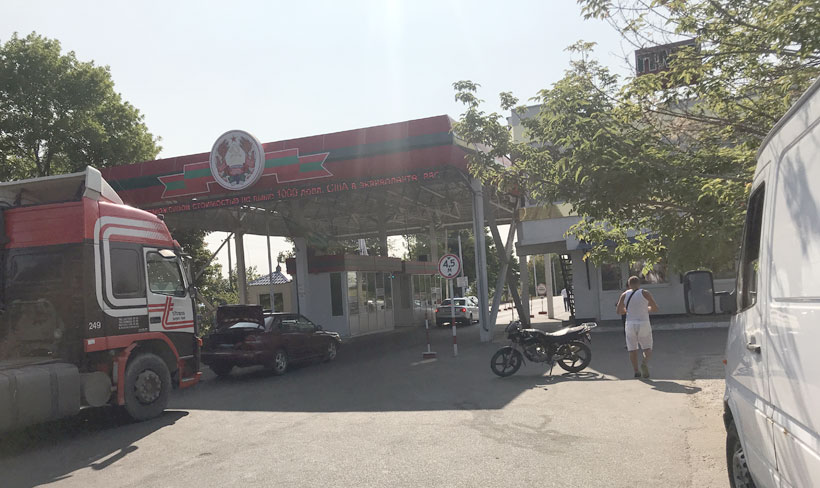 Note: Citizens of all nations do not require a prior visa to visit Pridnestrovie. A ‘visa’ is granted on arrival at one of the border checkpoints in form of a piece of paper (see below). If your passport belongs to a nation that requires a visa to Moldova, then that’s your default ‘validation’ that you are legally in the territory.

The officer will ask the purpose of your visit (which should be ‘tourism’ in most cases, don’t say blogger or journalist), and how many days you’d be staying. If your stay is more then 24 hours then you’ll need to give the name and address of hotel or homestay (be prepared to have a copy of the reservation). In a few minutes you will be given a paper that is your official visa to enter the country. Your passport will not be stamped at all. 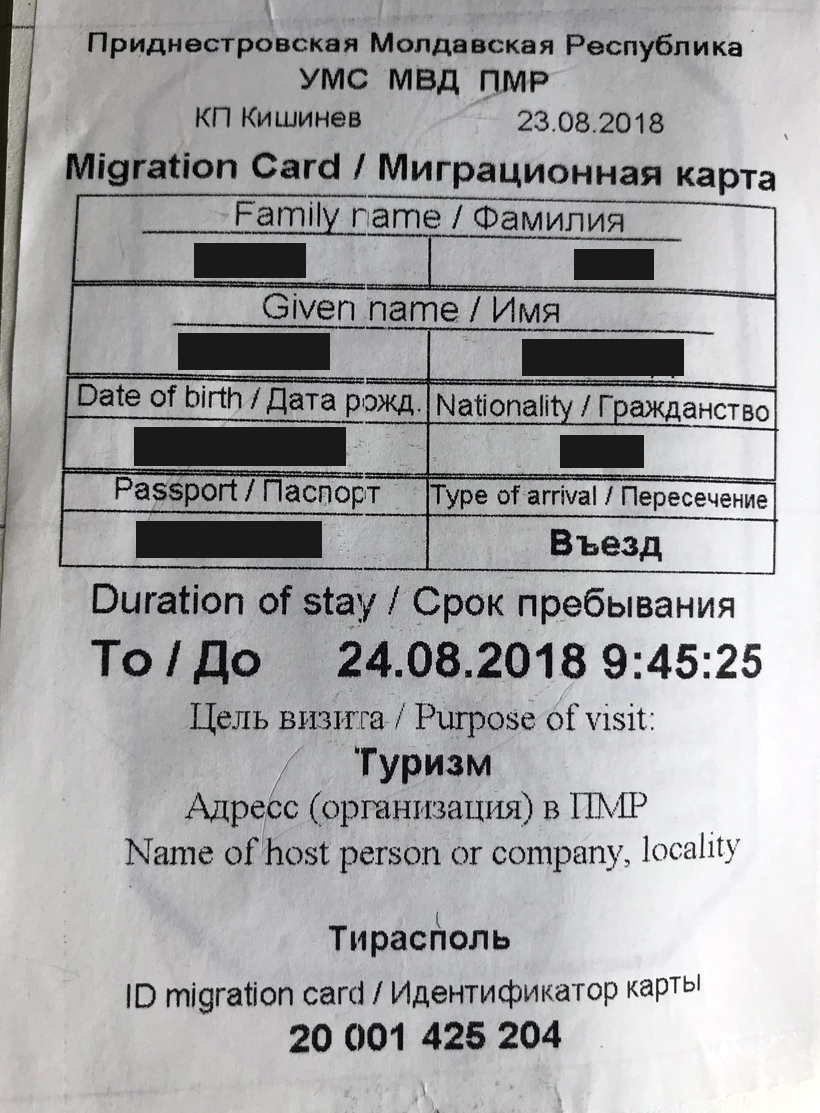 [Visa slip of PMR or Transnistria]

The duration of your stay will be mentioned in the visa. If you stay over 24 hours, you will need to register at OVIR. Most likely your hotel will do this for you, or if at a homestay, the owner will need to help you. You will need your passport and the visa. After a successful OVIR visit, you will be given a new slip that you will need to exit the country.

Reports of officers asking from bribes are everywhere on the internet, but things are very streamlined and different now. My entry was smooth and straight forward with no bribes being asked! If you are entering Pridnestrovie from Ukraine, then you’ll be passing a Moldovan immigration, followed by Pridnestrovian immigration (this was confirmed to me by a fellow traveler in the hostel in Chisinau). This makes it easy for travelers worried about not getting an entry stamp into Moldova.

The last stop in Tiraspol is the Central Bus Station, which is the same as train station. You can exchange currency at the station.

Crisp and new Euros and U.S. Dollars are widely accepted to exchange, and so are Moldovan Lei (MDL). With many exchange centers in Tiraspol, it is quick and easy to convert. No passport or ID necessary. Make sure to keep the receipt of the exchange as you may be asked to convert back to EUR, USD or MDL.

Pridnestrovie is not part of the international banking system. So in general, ATM cards or credit cards may not work there, although I was able to use my credit card (U.S. based) for a shawrma!

Tiraspol
Disclaimer: The following is a customized itinerary for a day in Tiraspol done by me, and is not exhaustive in any way. There are many other sights to see in the city, and also the country. This is a self-guided tour and will highlight the main sights, but for in-depth information it’s highly recommended to join the free walking tour by Anton.

Starting from the train/bus station, head south along Lenin street and admire the Presentation of the Jesus Church with its three-domed entrance. 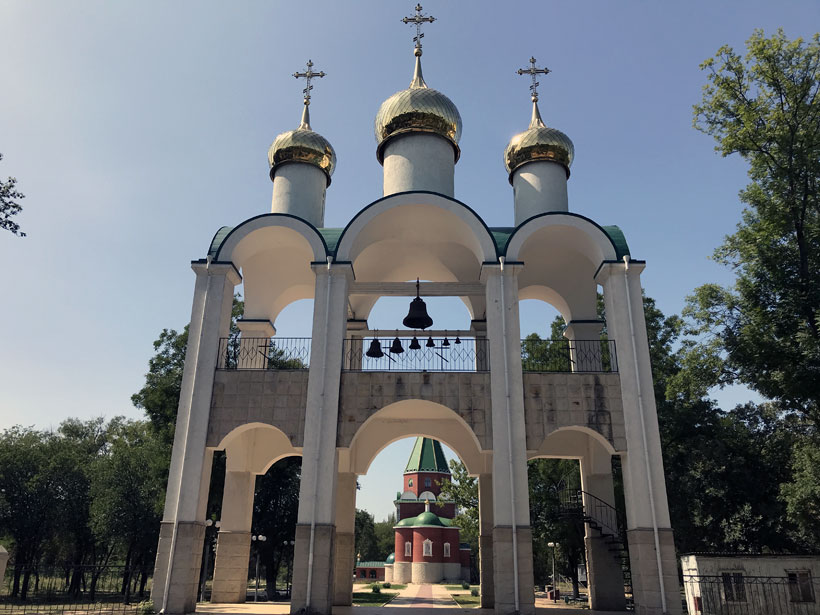 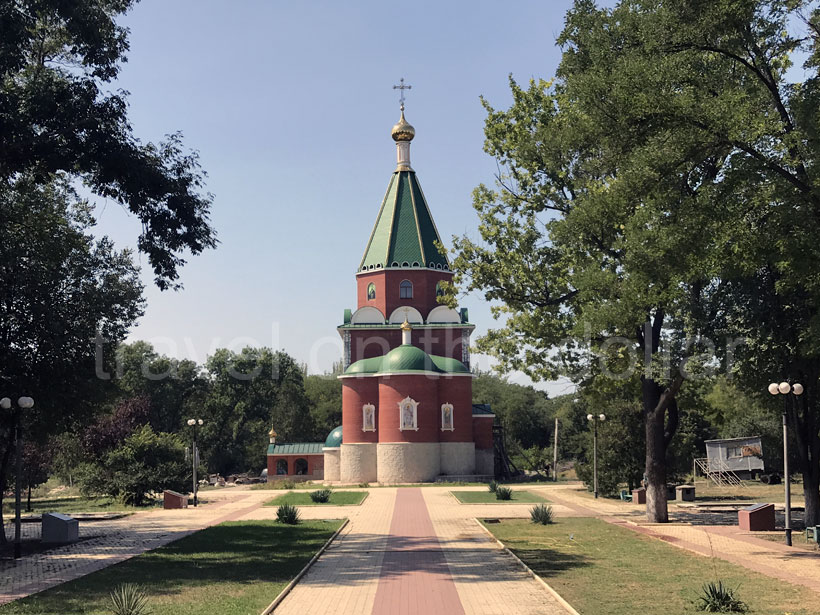 Walking further south will bring you to the tourist information office. The awesome and helpful staff of this office will guide you to all the sights to see, places to eat and things to do. They also have souvenirs (fridge-magnets, currency, flag, etc.) of Pridnestrovie. 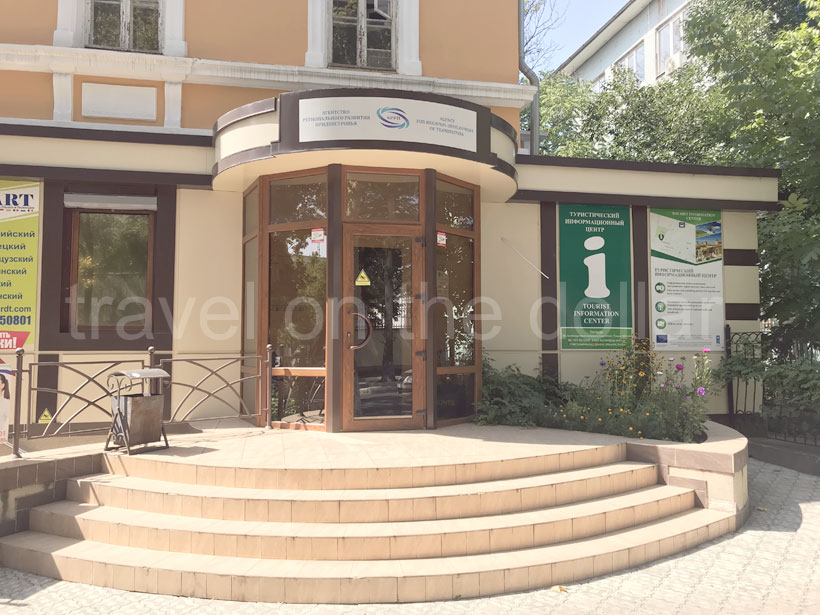 I walked for about 15 minutes along Lenin street to the main street of Tiraspol – October 25 Street. And the first sight was the post office at the intersection of the two streets. I had to collect the stamp of PMR for my Postal Stamp Travelogue book. Make sure to ask a stamp of PMR because the default stamp given to you will be a Moldovan stamp. 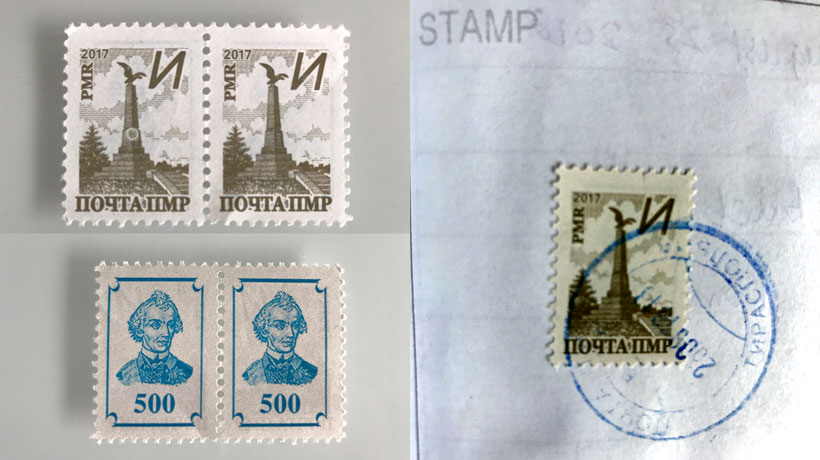 Coming out of the post office, walk right along October 25th street to the eastern end, where you will see the National Theater. 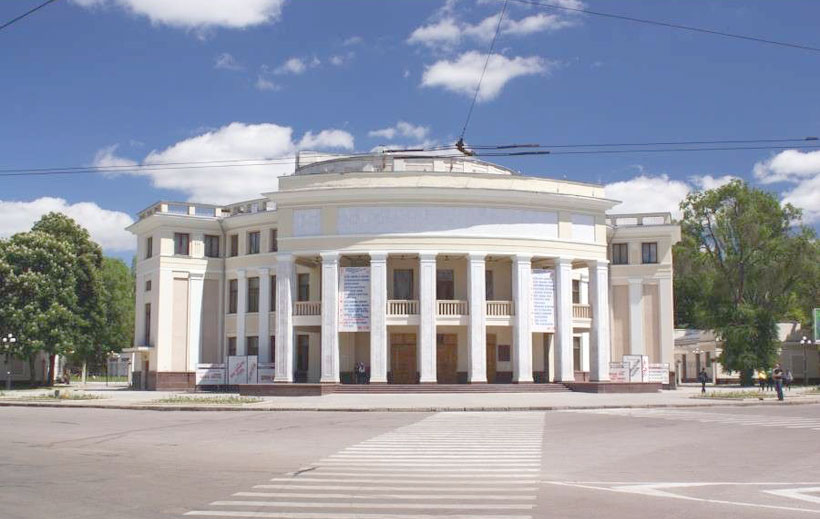 Walking west from here along 25th October street will bring you to the following sights, that can be seen on the map above marked with an orange alien sign: 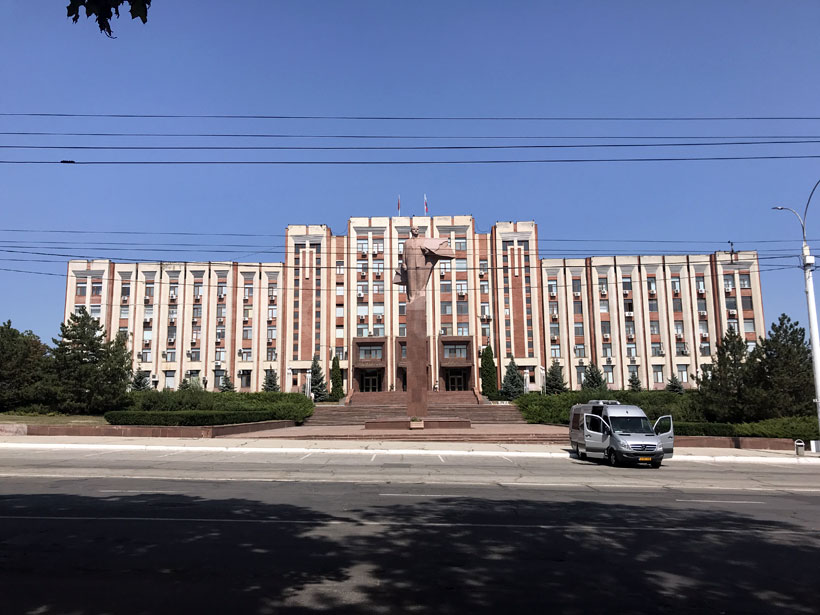 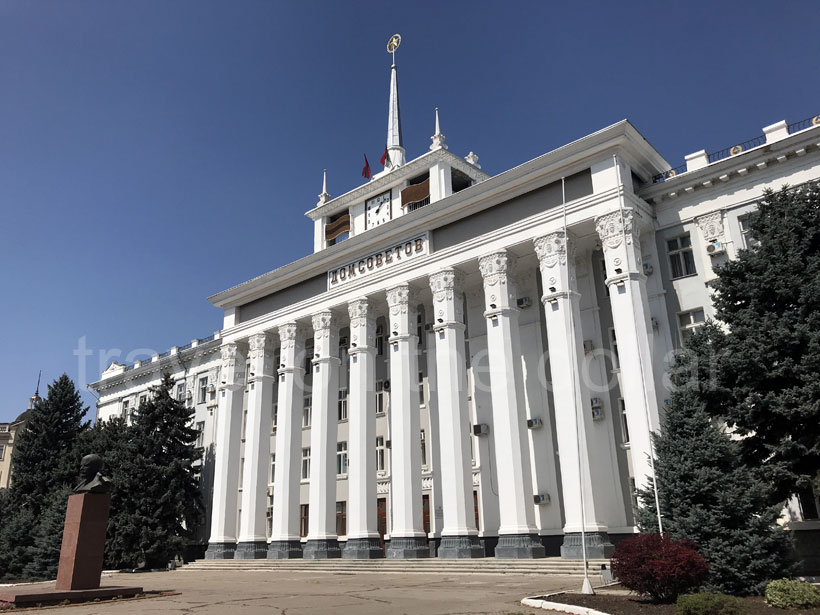 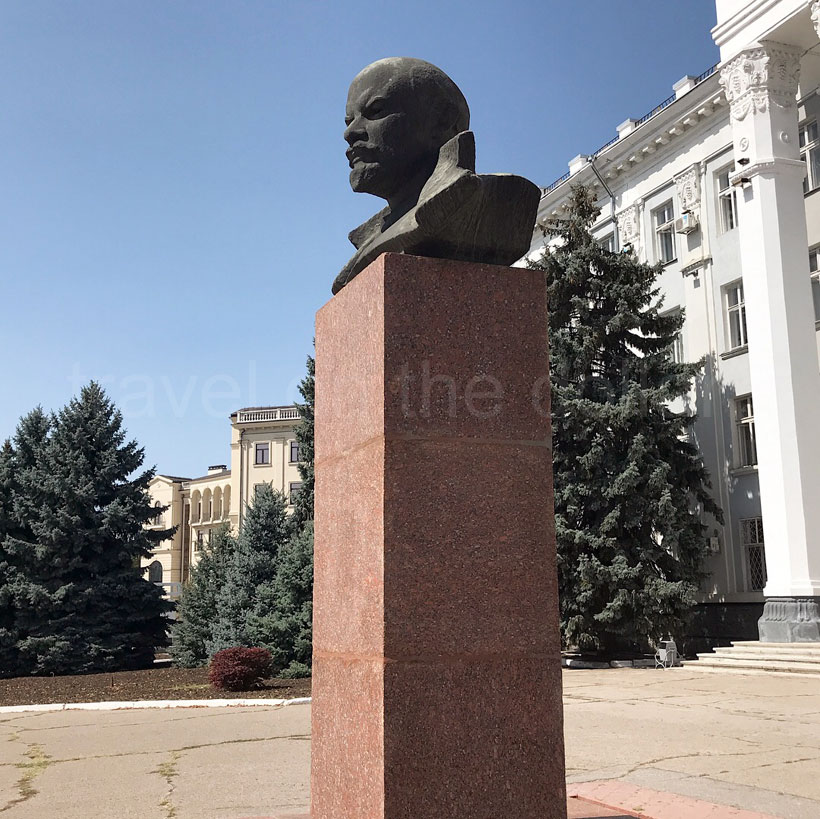 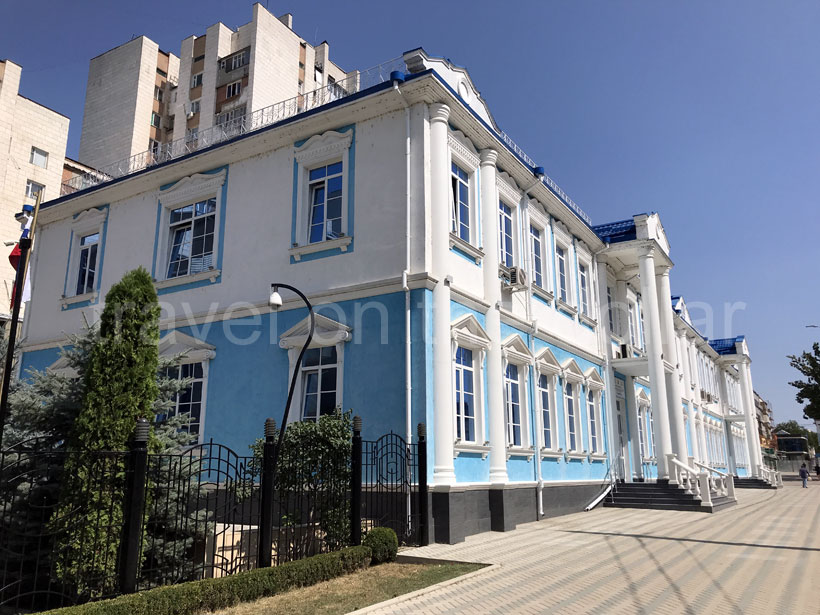 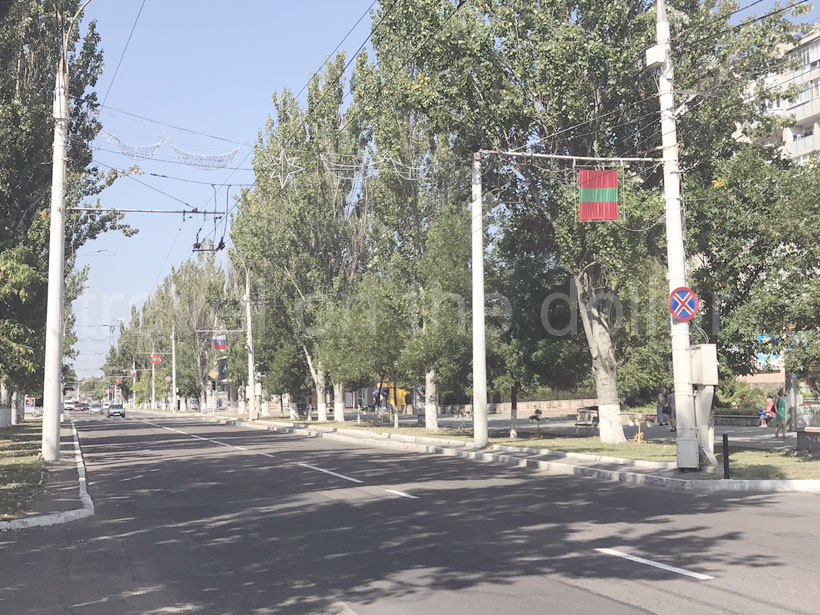 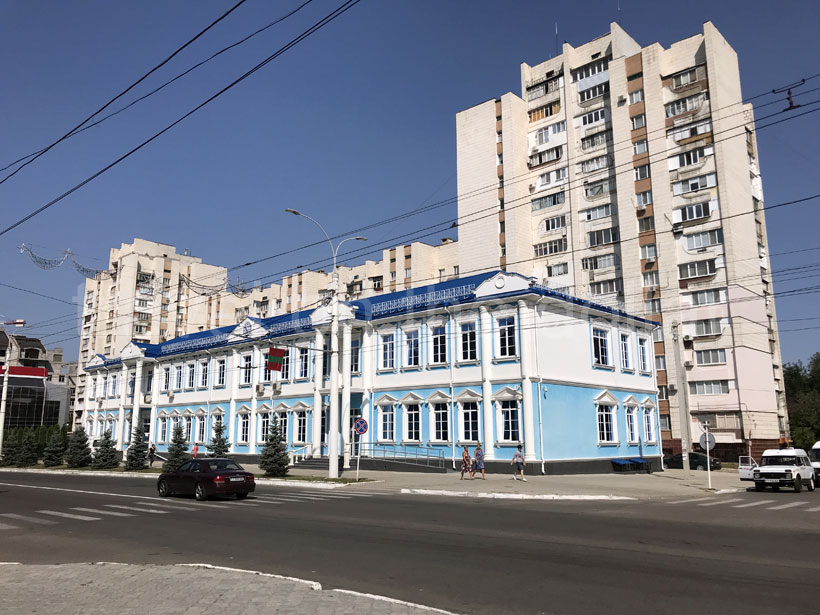 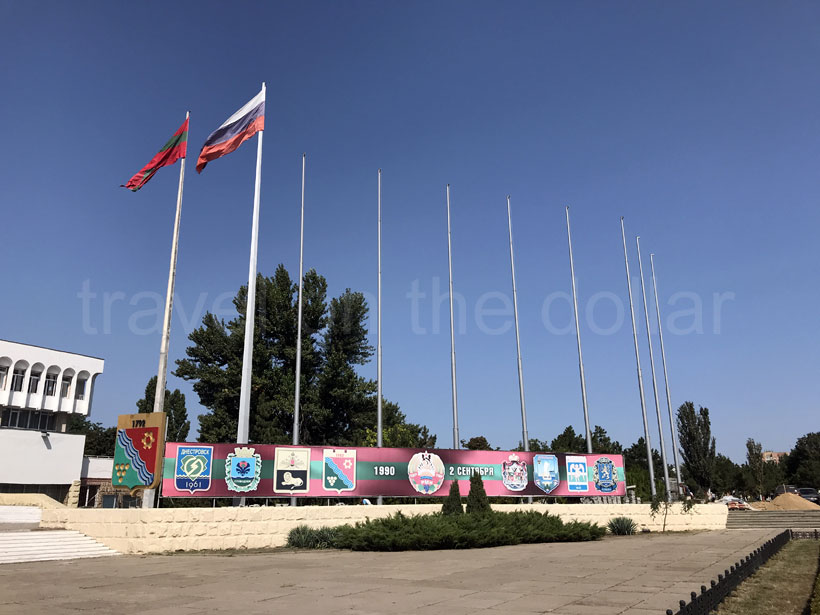 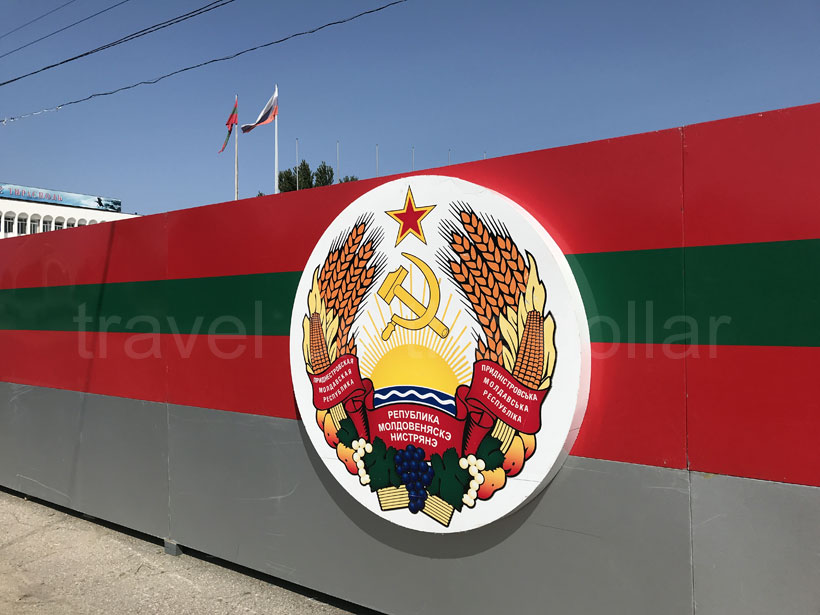 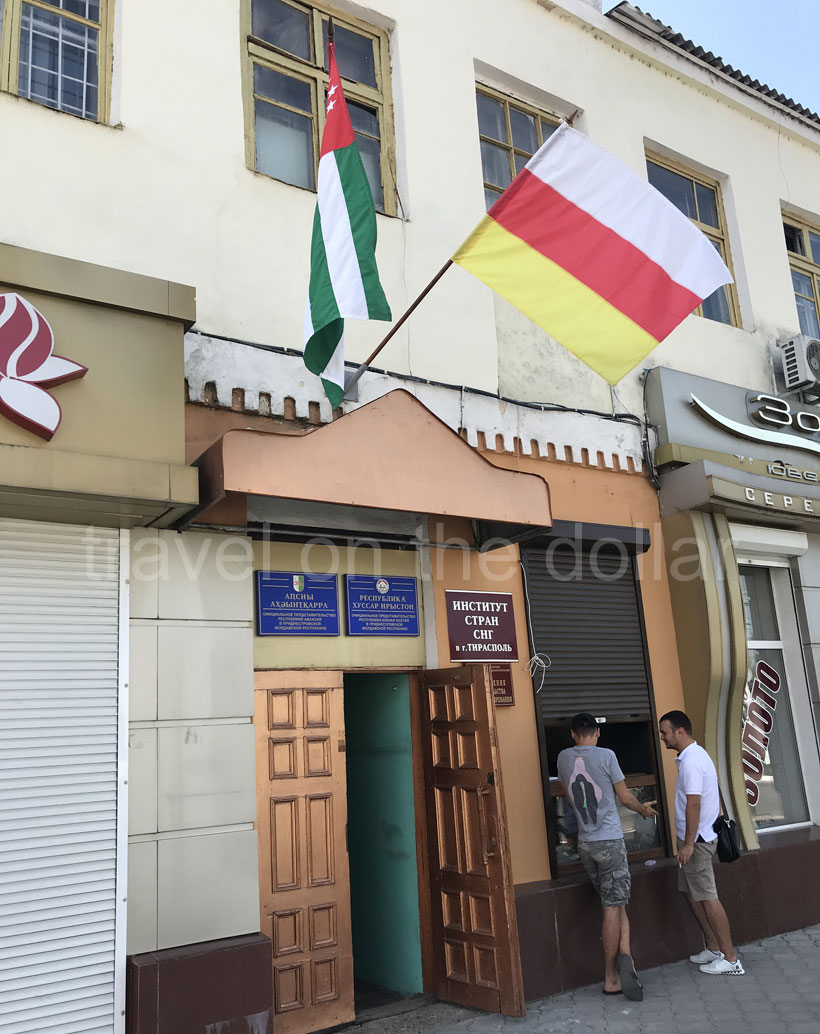 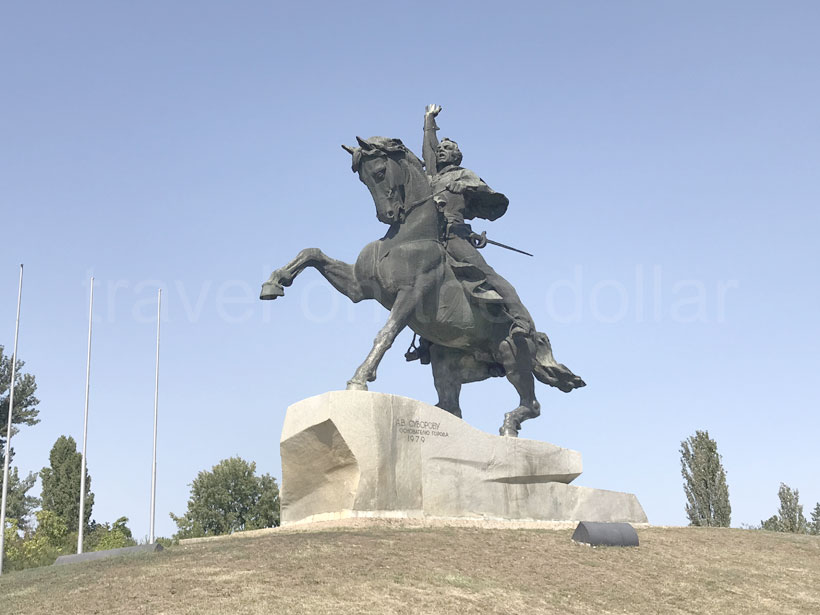 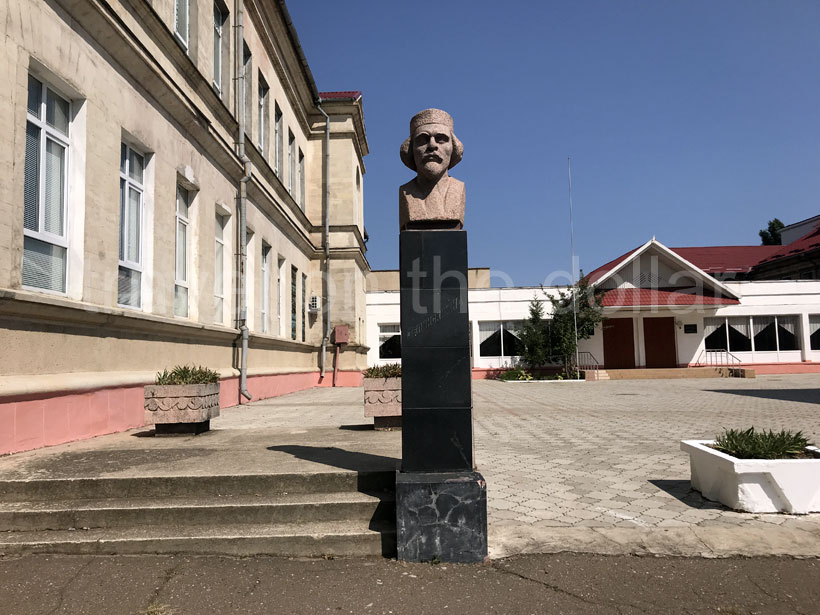 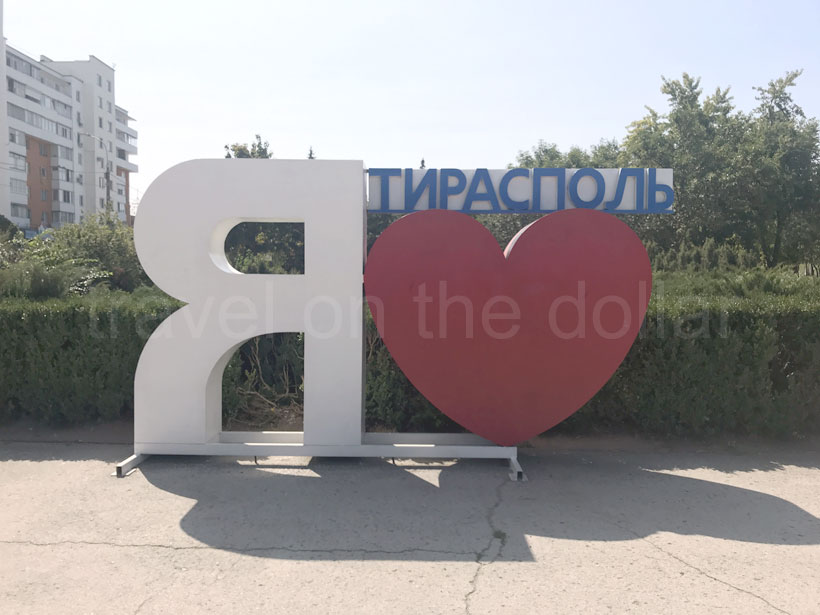 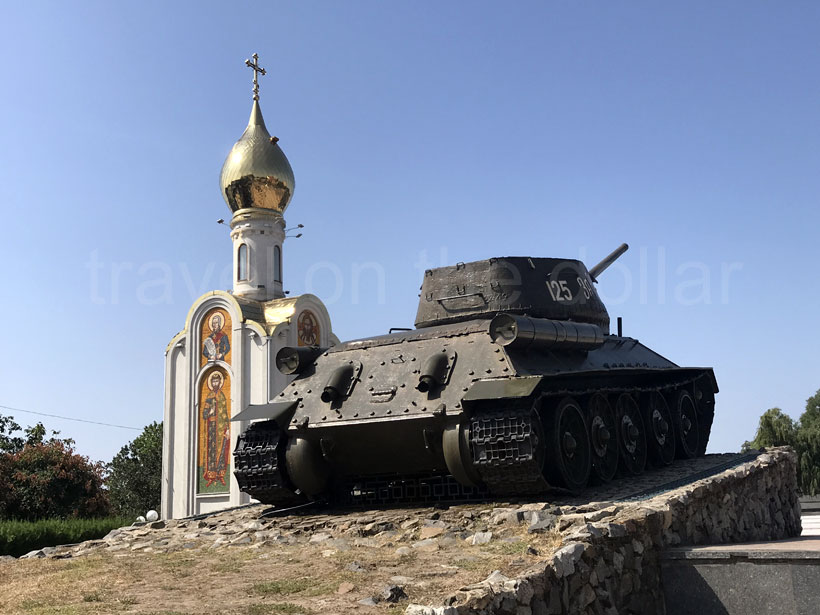 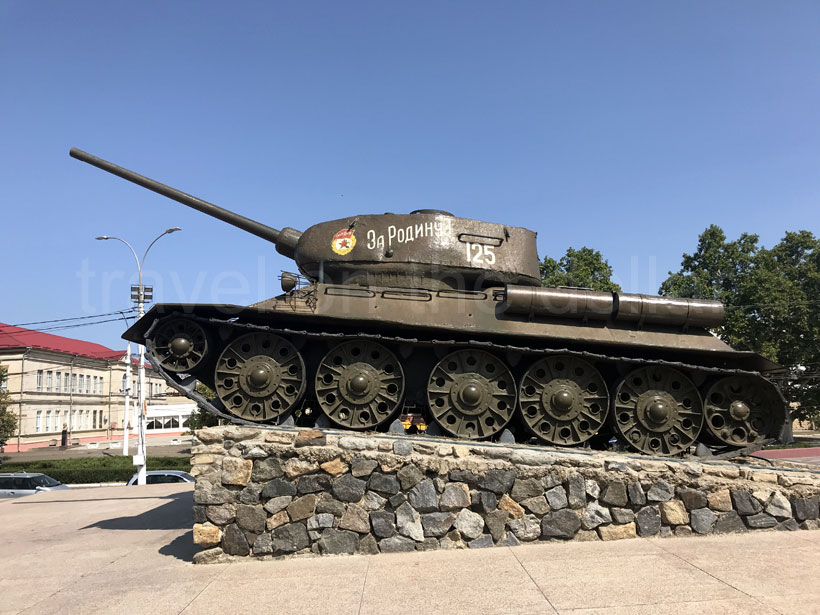 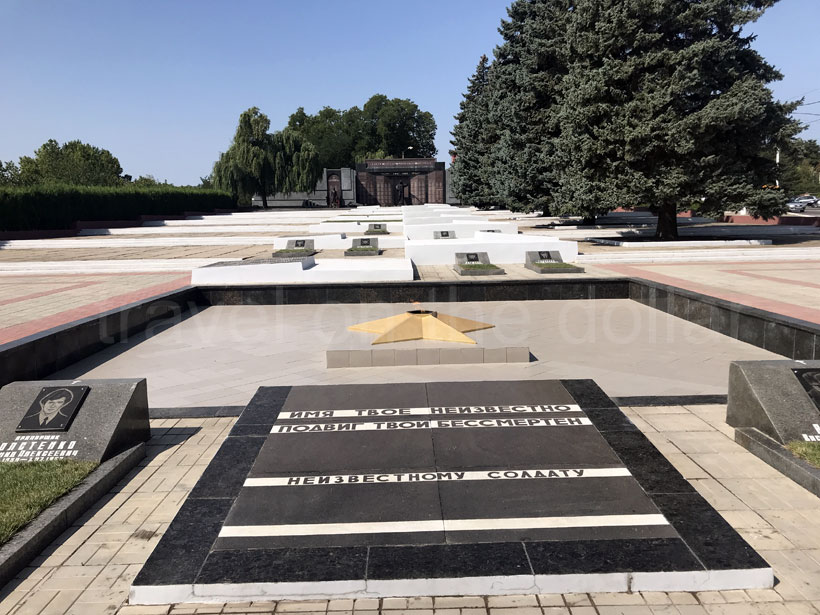 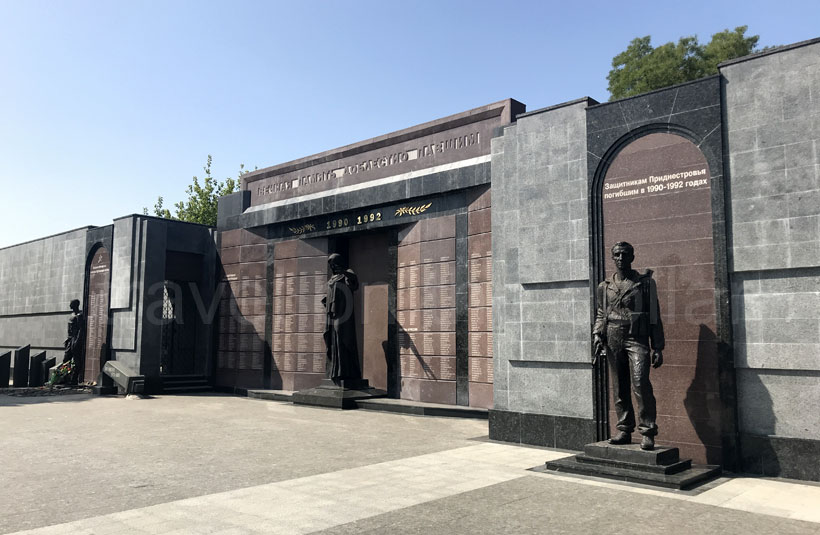 To head back to Chisinau, simply find the marshukta at the Central Bus Station in Tiraspol. The marshutka’s run every 30 minutes (every hour on weekends). At the immigration checkpoint of Pridnestrovie, a guard will enter the marshukta and briefly check your passport and the slip.

Taxi and Marshukta
Taxis are plentiful in Tiraspol. Some have meters. But regardless, make sure you agree on a price. Minimum is around 20-30 Pridnestrovian Rubles. Marshuktas are ubiquitous in the capital. They run their routes on a frequent basis. In most cases, it is a comfortable ride since they are not overly packed like in some ex-Soviet countries. The ride within the city is 3.5 Rubles. You pay on entry, exit, or anytime during the ride. Marshuktas will also bring you from town to town throughout Pridnestrovie.