Capital city of Poland that was razed to the ground during the World War II, Warsaw has come a long way of recreating the city to its former glory. Adorned with beautiful buildings, Warsaw’s Old Town has been placed on the UNESCO’s list of World Heritage Sites as an outstanding example of a near-total reconstruction of a span of history covering the 13th to the 20th century.

If you find yourself in Warsaw then you can see a lot of the main attractions within a 2-3 hour walk. Warsaw’s attractions revolve around the center of the old town (Stare Maestro).

1. Monument of Warsaw Uprising
Start just west of the Old Town at the Monument to the Warsaw Uprising, a haunting monument that symbolizes Warsaw’s divide between past and future. At this point where reconstructed historic Warsaw ends, and the vast expanse of socialist architecture, massive apartment blocks and new modern skyscrapers begins, we are reminded of the significant role of the uprising in shaping the city. It was in reprisal for the insurgents’ attempt at liberty that the German army bombed Warsaw to the ground, destroying over 80 percent of its historic treasures and leaving a sea of rubble behind. The restored Old and New Towns that stretch out behind the Uprising Monument are a testimony to the undying will of Warsaw’s citizens, who refused to let their beautiful history disappear from memory.

This monument to the uprising was the first monument to be erected in post-communist Poland, unveiled on 1 August 1989. The monument depicts the insurgents emerging from a structure of jutting pillars, crumbling brick and fallen slabs of heavy stone. While the ruins that surround them look as though they are about to crush them, the insurgents all seem to be caught in motion, the angle of their bodies betraying a dogged march forward.

While monuments to the bravery and martyrdom of wartime heroes sprang up all over Warsaw with the end of communism, the Monument to the Heroes of the Warsaw Uprising on Krasinski Square will make an unforgettable impression, and give you a deeper understanding of what the uprising really means for Warsaw, past and present. 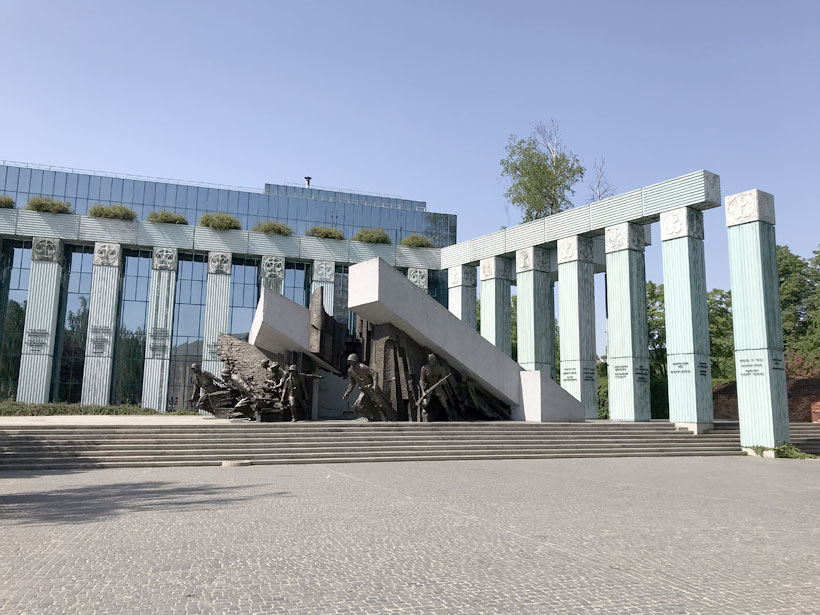 2. Monument to the Little Insurgent
From here, head northeast along ul Długa and take the first right into ul Kilinskiego. At the far end are the redbrick fortifications of the Old Town; go right and then left into the garden below the walls to see the Monument to the Little Insurgent, a memorial to the children who died in the Warsaw Uprising. In 1944, which lasted two months and one day (1st August 5pm – 2nd October), the statue is of a young boy holding a sub-machine gun and a helmet which is styled after the German forces. This equipment was seized during the intensive fighting of the uprising, and then used by the resistance against the invading forces. It is reported that the statue is of a young fighter who fell to his death on August 8th 1944 whilst fighting for the pseudonym of “Antek” (The underground). 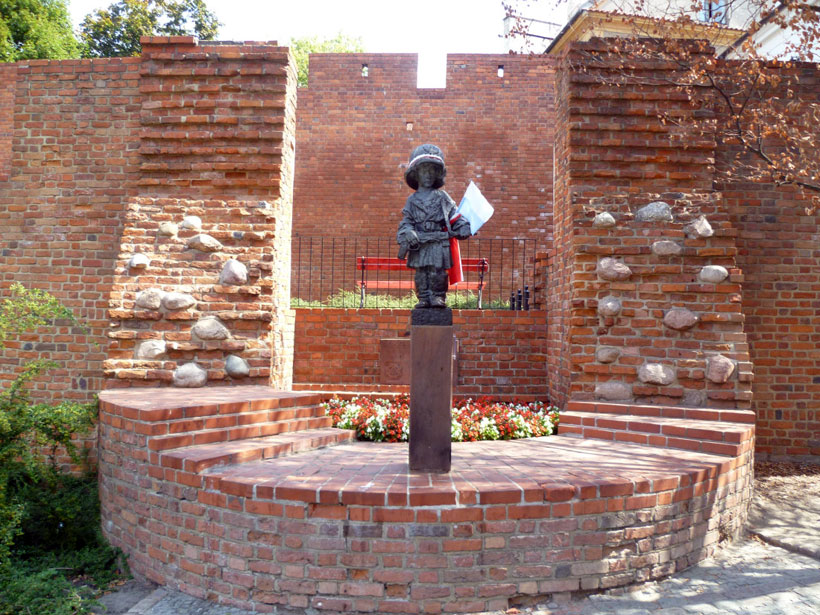 3. Barbican
Follow the path northwards along the inside of the walls to the Barbican, a semicircular fortified outpost that is one of few remaining relics of the complex network of historic fortifications that once encircled Warsaw. Dating back from 1548, this fearsome rotund structure was only ever used in one fighting action when on June 30, 1656, during the Swedish deluge, Polish troops attacked to retake the city. In the 18th century, the Barbican was partially demolished with the remains being incorporated into new apartment buildings.

It was during the interwar period that restoration work began to return the Barbican to its former glory, but alas, World War II put a hold to works, with it being completely destroyed. Along with the Old Town reconstruction, the fortified wall and barbican were restored. Today, it serves as a bridge between the Old and New Town, and is also the hangout of choice for teenage drinkers, buskers and ‘artists’ selling their wares. 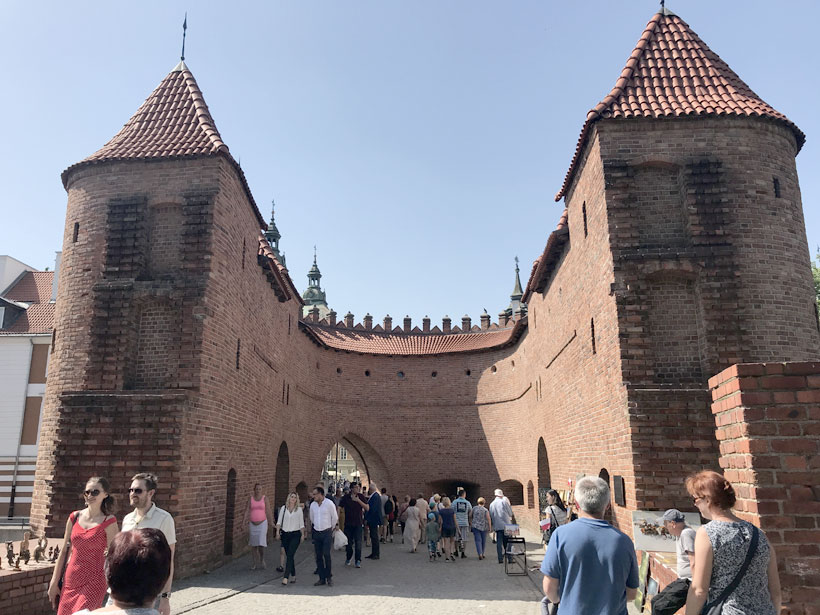 4. Old Town Square
Turn right and follow ul Nowomiejska to the Old Town Square to admire its historical houses. An 1855 statue of the Mermaid (Syrena), the symbol of Warsaw, occupies the square’s central position, the site of the city’s original town hall, demolished in 1817. On almost any given day, the square is swamped with tourists enjoying the pretty surrounds and numerous cafés and restaurants. 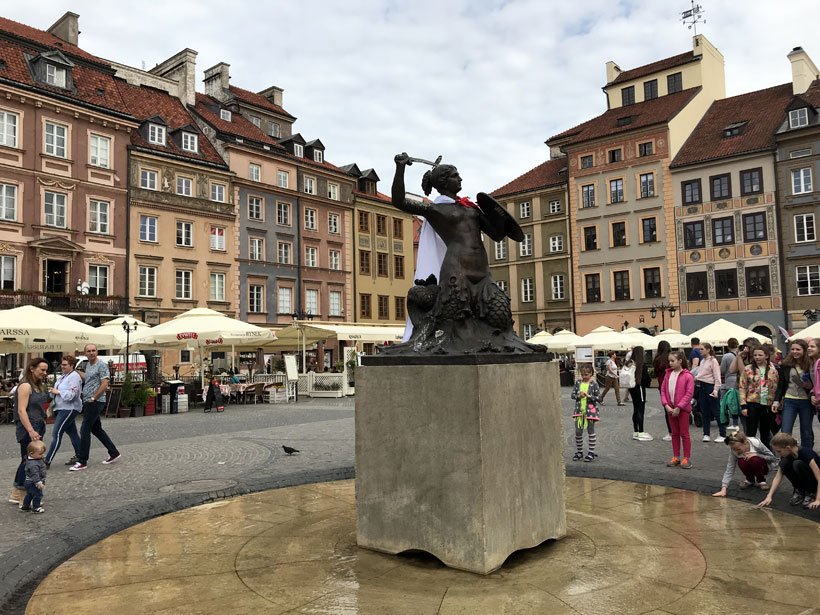 5. View point to the river
Then head diagonally across the square and go left down ul Celna, then right to a view point looking across the river.

6. Plac Kanonia
Go up the stairs to the left of the rear entrance to the John Bull Pub to reach the picturesque little square Plac Kanonia. Canon Square (plac Kanonia), is a small triangular square whose name comes from the 17th century tenement houses which belonged to the canons of the Warsaw chapter. In the middle of the square, is the bronze bell of Warsaw, that Grand Crown Treasurer Jan Mikołaj Daniłowicz, founded in 1646 for the Jesuit Church in Jarosław. 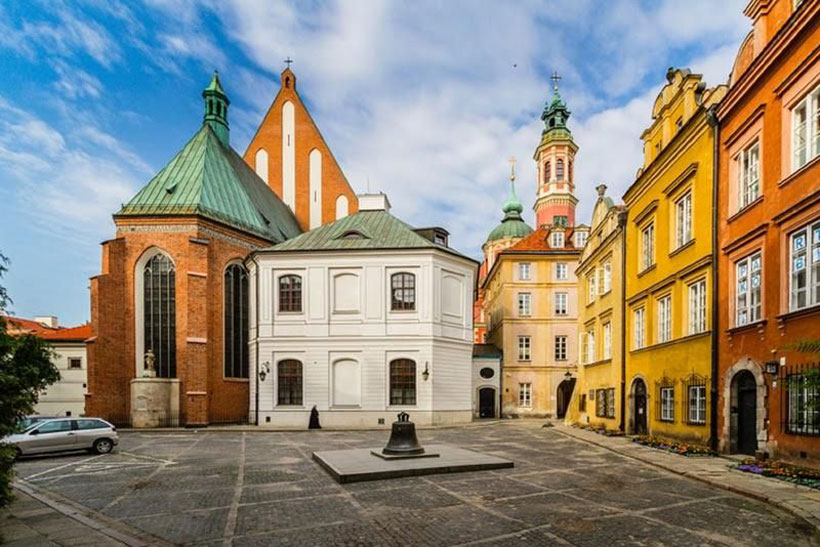 Originally built in the 14th century in Masovian Gothic style, the Cathedral served as a coronation and burial site for numerous Dukes of Masovia. The Archcathedral was connected with the Royal Castle by an elevated 80-meter-long corridor that had been built by Queen Anna Jagiellonka in the late 16th century and extended in the 1620s after Michał Piekarski’s failed 1620 attempt to assassinate King of Poland Sigismund III in front of the Cathedral.

After the resolution of the Constitution of May 3, 1791, at the end of the session at the Royal Castle, King Stanisław August Poniatowski went to the Cathedral of St. John to repeat the Oath of the Constitution in front of the Altar, in the face of God. Also the Marshals of the Great Sejm were carried to the Archcathedral on the shoulders of the enthusiastic deputies of the Sejm.

The church was rebuilt several times, most notably in the 19th century, it was preserved until World War II as an example of English Gothic Revival. In 1944, during the Warsaw Uprising the Cathedral was a place of struggle between insurgents and advancing German army. The Germans managed to induct a tank loaded with explosives into the Cathedral, a huge explosion destroyed large part of the building. After the collapse of the Uprising, German Vernichtungskommando (Destruction Detachment) drilled holes into the walls for explosives and blew up the Cathedral destroying 90% of its walls.

Leveled during the Warsaw Uprising (August–October 1944), it was rebuilt after the war. The exterior reconstruction is based on the 14th-century church’s presumed appearance (according to an early-17th-century Hogenberg illustration and a 1627 Abraham Boot drawing), not on its prewar appearance.

The interior reconstruction design considerably differed from the pre-war Cathedral, taking it back in time to its raw Gothic look, because very little of the cathedral’s original furnishings has been preserved. The Cathedral is a three-nave building, two aisles are the same height as the main nave. On the right side from the front a belfry is situated, a passage to Dziekania Street is situated underneath it. There is a pulpit from 1959, designed by Józef Trenarowski and stalls which are a replica of the destroyed baroque ones, founded by King John III Sobieski. Moreover, there are many chapels, gravestones and epitaphs in the Cathedral. 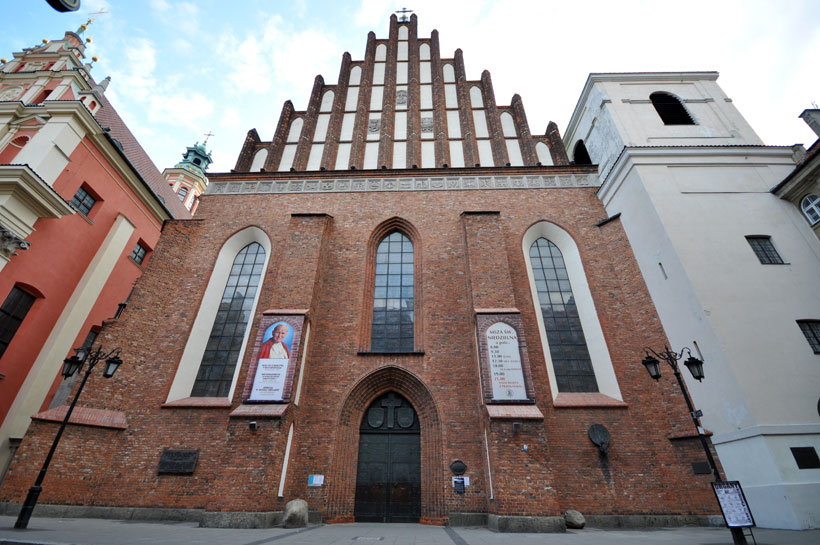 The Royal Castle (Zamek Królewski) dates back to the 14th century when a tower and wooden buildings stood here.
The construction of the Castle in its current form began towards the end of the 16th century. King Sigismund III. (Zygmunt III.) ordered the expansion shortly after Warsaw became the capitol of Poland in 1596. Later the castle was expanded several times. King Wladyslaw IV. built the Wladyslawowska Tower (in the courtyard) and King August III remodeled the outside of the castle facing towards the Vistula and the wing facing towards the north.

The largest modifications were done by Poland’s last King Stanislaw August Poniatowski after he came to power in 1764. He changed several things inside the castle and built the south wing. In the Second World War a huge part of the castle was damaged in 1939, later in 1944 the remaining parts were destroyed. Today’s Royal Castle is a reconstruction of the old castle. Fortunately lots of original details can still be seen today as they had been kept at a secure location during the war. The decision to rebuild the castle came in 1971, so that the reconstruction took around 50 years from its destruction. 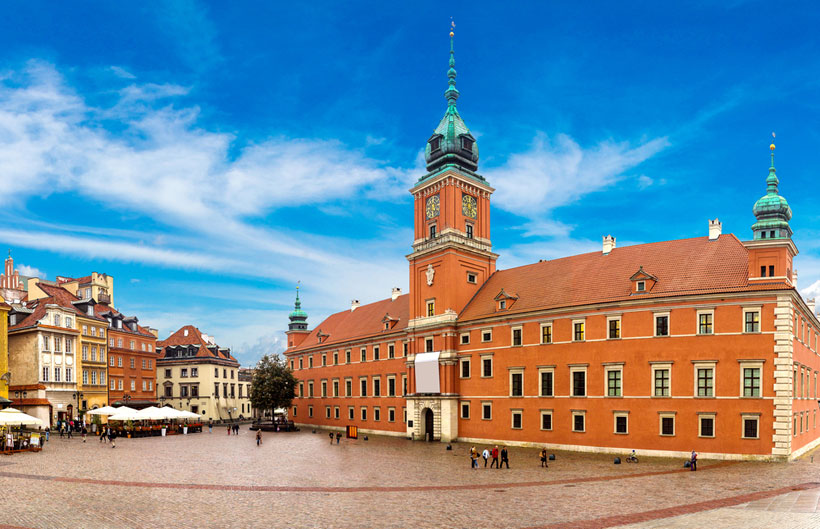 9. St. Anne’s Church
At the southern end of Castle Sq, climb the bell tower of St Anne’s Church that has a viewing platform, which offers superb views over the Old Town. The church is arguably the most ornate church in the city. 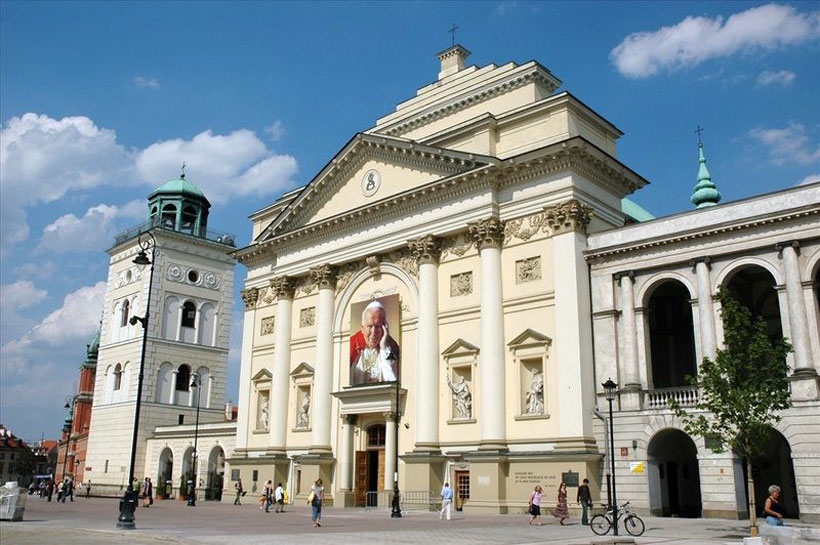 10. Mariensztat
Take the steps just north of the tower that lead to a cobbled path that slopes down and around behind the church. The path leads to the little square of Rynek Mariensztacki, which lies at the heart of the attractive Mariensztat district.

Mariensztat is a neighborhood in Warsaw’s borough of Sródmiescie (city centre). It is located between the Vistula River and the Old Town. The historical neighborhood dates from the 18th century, when local nobleman Eustachy Potocki married Maria Katska and received the parcel of land as part of Katska’s dowry. He established a jurydyka and named the town Maryenstadt after his wife, adding the German suffix stadt to please the Saxon king of Poland.

After World War II, the spelling was changed to Mariensztat, but this did not change the pronunciation. The neighborhood was razed to the ground during the Warsaw Uprising in 1944. Reconstruction work began in 1948, involving a complete redesign of the street plan and architectural appearance of the area. Mariensztat became a model housing project under Poland’s new communist authorities, and was the first part of the city to be completed in their ongoing reconstruction of Warsaw. Rebuilt in 1948, with buildings inspired by Warsaw’s 18th-century architecture, it was the city’s first socialist housing development. 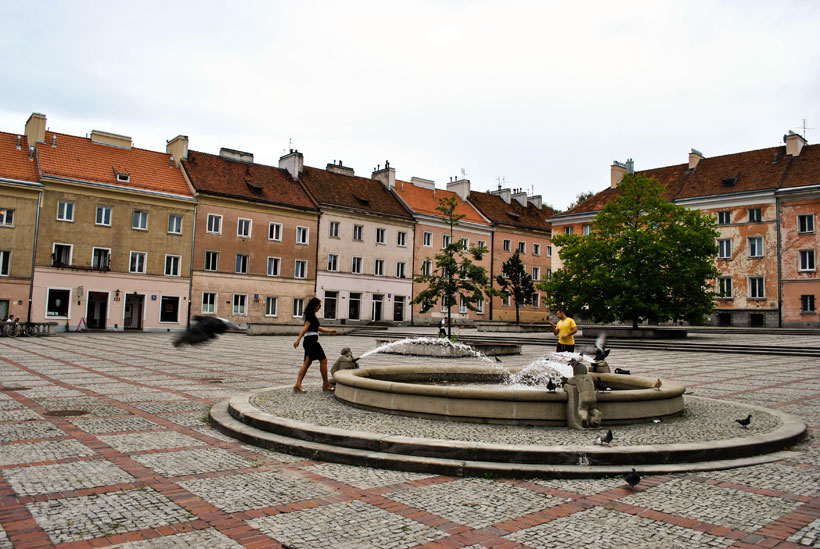 11. Royal Way
Turn right along ul Sowia, and then climb up the cobbled lane of ul Bednarska to finish on the Royal Way at ul Krakowskie Przedmiescie. 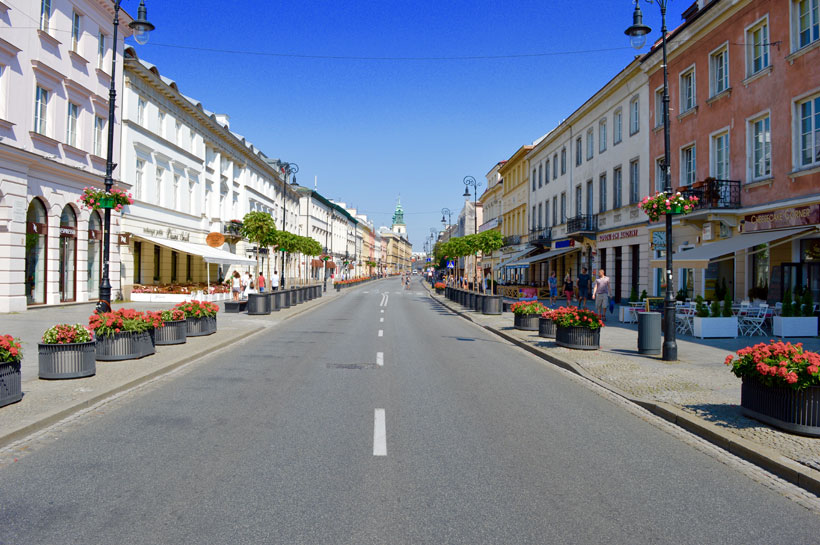