Celje is the third largest city in Slovenia, with a very old and very beautiful old town in the city center. Nearby is the Stari Grad castle sitting on top of a hill requiring a vehicle to get to. This self-guided walking tour will take you through the old town in the center, and all the beautiful sights this tiny town has to offer, within 2-3 hours. 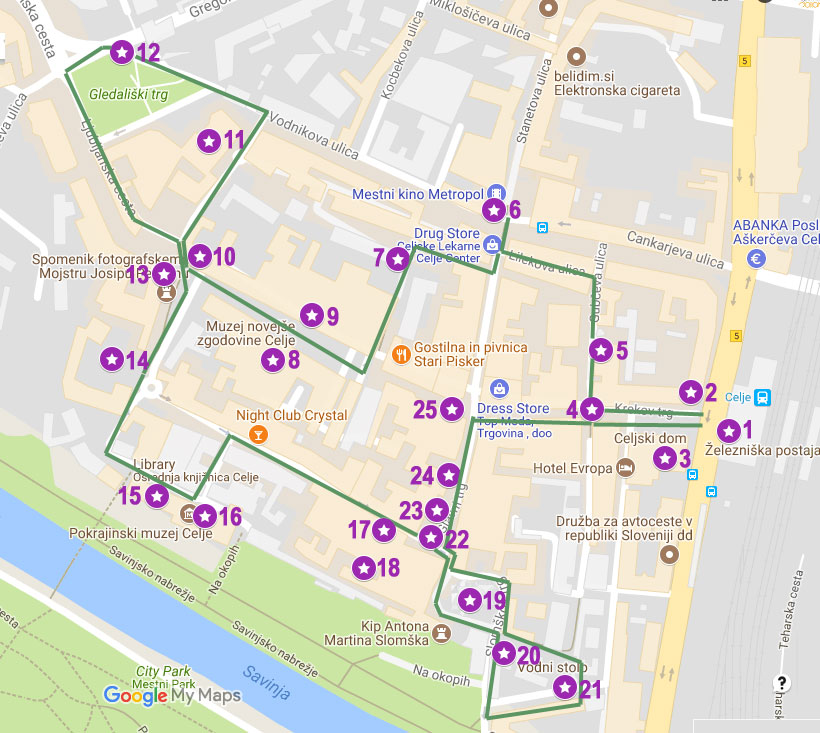 1. Celje Railway Station with the Plane Tree
The two-storey railway station was built in 1846 when the first train arrived in Celje. The construction of the approximately 570km long railway line connected Celje to Vienna and Trieste. In the middle of the road located next to the railway station, you will find the largest plane tree in Slovenia, which was declared Tree of the Year in 2006.

3. Celje Hall
The former German Deutsches Haus on Krekov Trg was built in a Neo-Gothic style. It was constructed in 1905 and 1906 by the German inhabitants of Celje to act as a counterweight to the Slovenian Community Center (Narodni Dom). Until the dissolution of former Austria-Hungary, it was deemed the social center of local German bourgeoisie. Later it was renamed the Celje Hall and housed the local movie theater. Today, it houses the Celje tourist information center.

4. Alma M. Karlin’s Statue
The statue is devoted to the globetrotter, authoress, polyglot and Theosophian Alma M. Karlin. She was born in 1889, traveled around the world on her own and later returned to Celje. She died in 1950 in a small house in Pečovnik, that has an exhibition dedicated to her life. The Celje Regional Museum has been bestowed with the honor of putting a permanent exhibition dedicated to her life and her journey around the world on display. 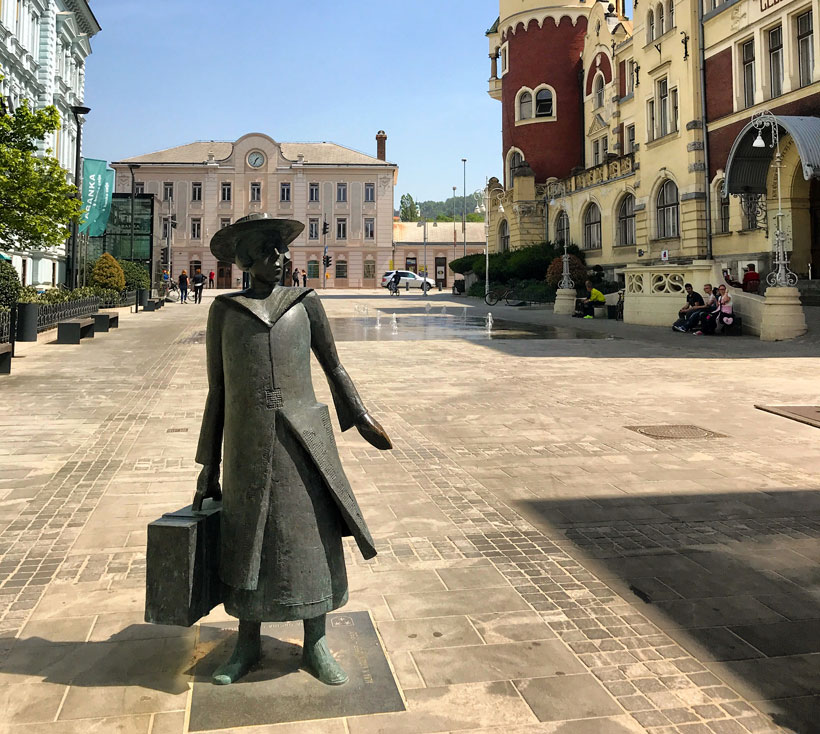 5. Early Christian Baptistery
Gubečeva ulica houses an early Christian baptistery with a baptismal pool, built at the turn of 4th/ 5th centuries that probably formed part of a larger church complex built in that part of the city.

6. People’s Savings Bank
The People’s Savings Bank was designed by renowned Slovenian architect Joze Plečnik and constitutes the most important facility in the city dating back to the Inter-War Period, unique for its column-supported balconies that grace the main entrance of the building. 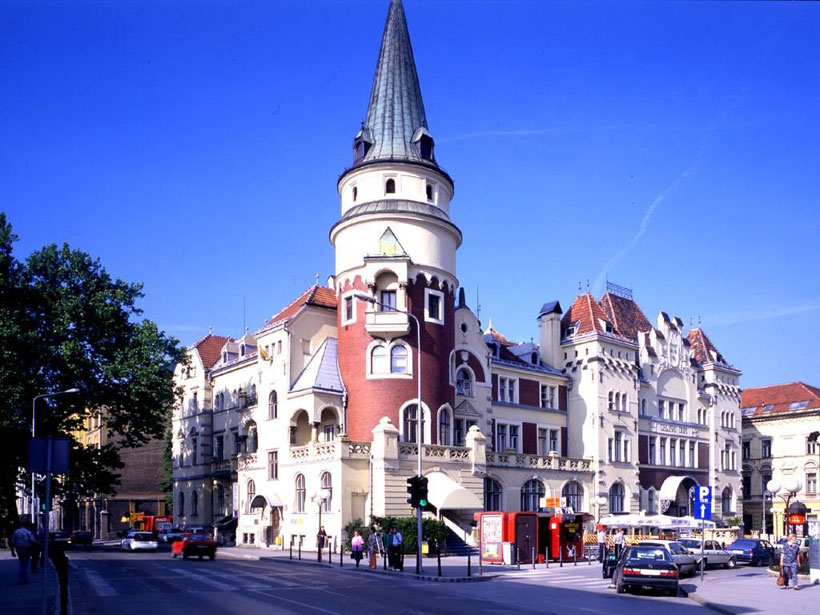 9. The Assumption of Mary Church
The Romanesque church was built in 13th century as an integral part of a Minorite convent. Its original appearance was not preserved, having been adversely affected by several fires, the most destructive of all being in 1798, which alsi destroyed a major portion of Celje.

10. Prothasi Manor
The 18th century manor named after its owner Lord Anton pl. Prothasi constitutes an isolated example of architecture of that time. Today, it houses judicial offices and a wedding hall.

11. Celje People’s Theater with Guard Tower
The north-western guard tower of the former city walls now forms part of Celje People’s Theater built in 1885. As early as 1825, the guard tower, which used to house the city torture chamber, was used by traveling actor troupes. In 1849, the play Micka, the Mayor’s Daughter, written by playwright A. T. Linhart, was performed in Slovenian for the first time.

12. War & Peace Monument
The expressive monument was erected in 1954-1958 to commemorate the victims of World War II and belongs to the best National Liberation Struggle monuments in terms of its design. The monument is erected on a 10-meter tall granite block. The bronze figures symbolically stand for the sculptor’s vision of war and peace.

13. Josip Pelikan’s Statue
This statue is dedicated to Celje photographer Josip Pelikan, of Czech descent, who was born in 1885 in Tarvisio. To commemorate him, the Museum of Recent History Celje preserved his photography studio where original equipment, including a glass parlor, are on display. 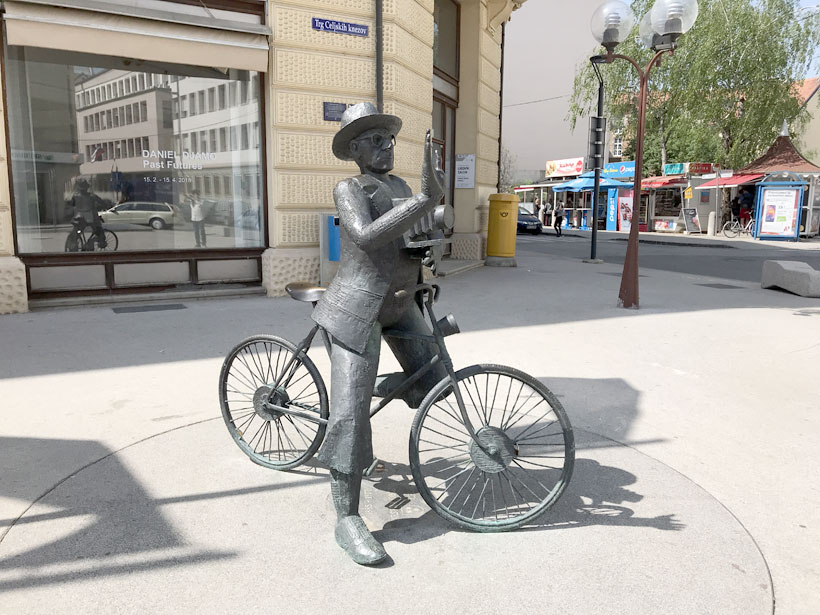 14. Princely Palace
In the 14th and 15th centuries, it served as the residence of the Counts of Celje. After they died out, the building houses the Prince’s or Grand Duke’s office and, in the 18th century, was refurbished into barracks. The building as it is known today has experienced significant changes, most radically during the reign of Empress Maria-Theresa. Nowadays, houses the Celje Gallery of Contemporary Art and two permanent exhibitions of the Celje Regional Museum: the Celeia – a town beneath today’s town archaeological exhibition space and Counts of Celje exhibition. 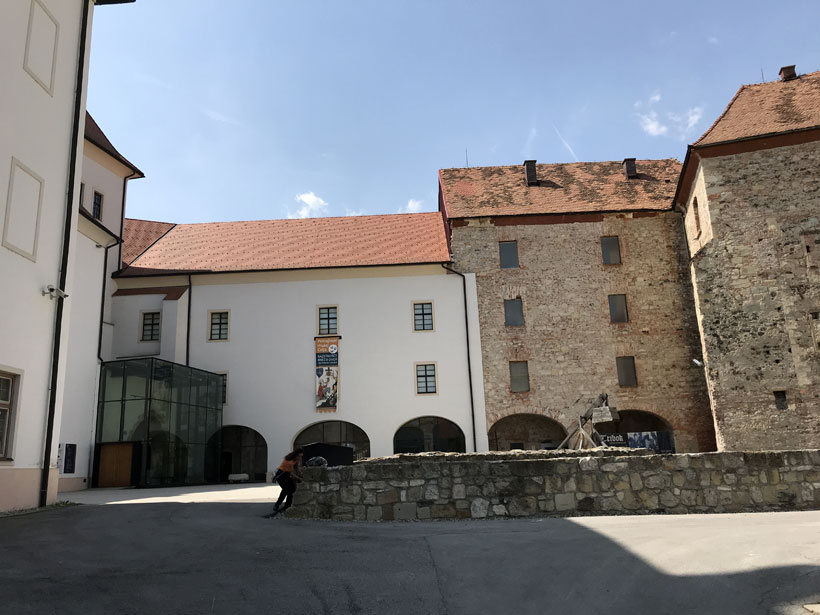 15. Celje Central Library
The Celje Central Library can be found on one of the most beautiful locations of the Princes’ City = by the Savinja river. In January 2010, the doors of the refurbished 4700 square meter library were open to an area of inspiration, life-long learning and creativity. Its 16,000 members, 370,000 units of library materials and 1 million visits per year make it the most frequently visited cultural institution in Celje and the third largest library in Slovenia. It also includes the Miško Knjižko Cafe and Sweet Shop, where you can enjoy the most delightful views of the city.

16. Old Counts’ Mansion (Celje Regional Museum)
The most beautiful Renaissance building was constructed between 1580 and 1603 along the southern part of the city walls, on the very spot where administrative and agricultural buildings of Celje Lower Castle had been erected previously. At the beginning of 17th century, arcaded hallways were added. After its purchase by the Municipality of Cekje in 1869, the designated function has changed several times.

17. Quarter house with Alfred Nobel’s statue
The building used to serve as an accommodation facility for troops and constitutes an example of preserved Early Renaissance architecture. An interesting feature thereof is the semi-circle portal and bust of Alfred Nobel, who used to visit his mistress Sofija Hess here. Today it has the headquarters of the Celje Tourist Association and the Quarter House Gallery. 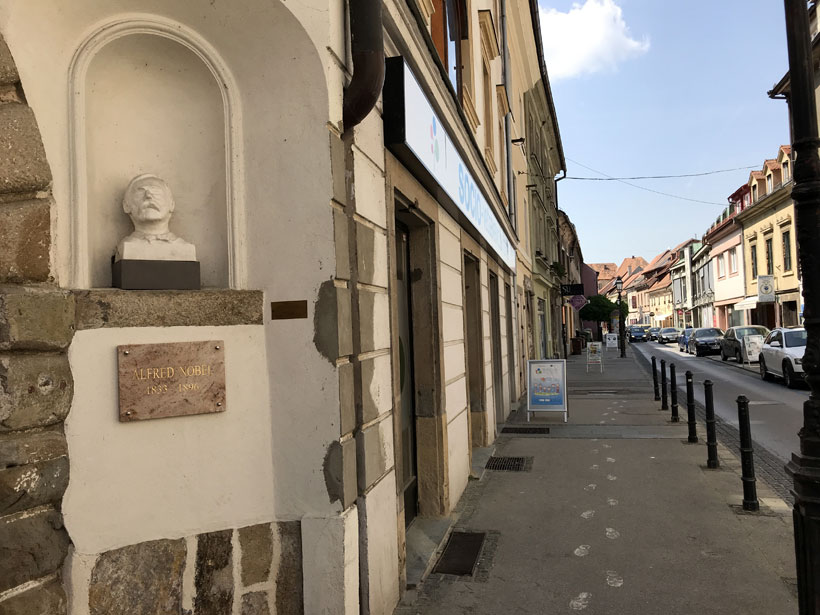 19. St. Daniel’s Church
The present-day Celje Cathedral was originally a Romanesque single-nave church. After several rebuilds, it acquired its current appearance in the second half of 20th century. In 2001, a chapel devoted to bishop and author Anton Martin Slomsek, whose statue is located by the church, was added. You can also see a valuable item from the Gothic period – the sanctuary of Our Lady of Sorrow, decorated with rich masonry, and a stone sculpture of the Pieta, medieval paintings and a Venetian-style main altar.

20. Municipal Poorhouse with St. Elizabeth’s Chapel
This is the only example of a preserved medieval poorhouse in Slovenia, dating from 15th century. It served as a municipal hospital in 19th century, but continues to constitute an intriguing complex of facilities in ambient terms. On the exterior, you can observe a stone bearing the year 1726 that constitutes a collection plate where alms for patients were placed.

21. The Water Tower
The south-eastern corner guard tower forms part of the medieval city walls and is also called the Almshouse Tower. It was built in the second half of the 15th century and constitutes one of only four city towers that have been preserved to this day. An interesting feature of the Water Tower is the tablet with an inscription and a stuck-out finger indicating the level of water during the 1672 flood. 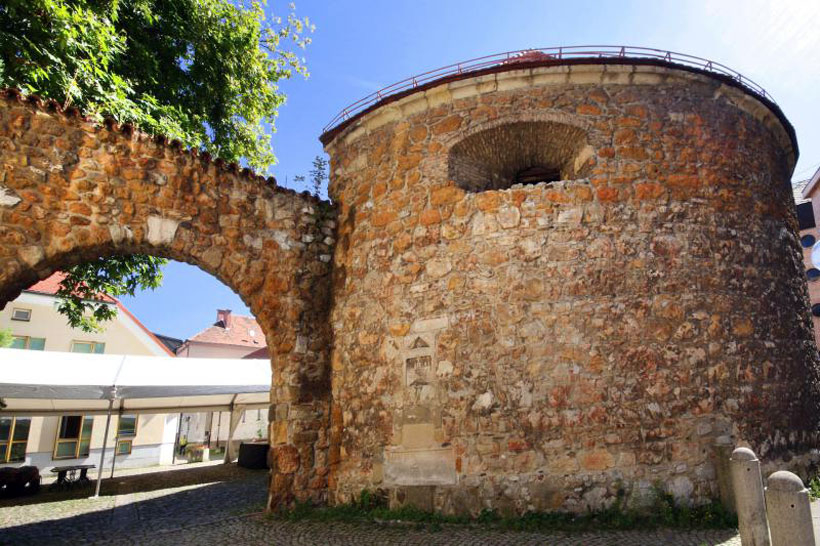 22. St. Mary’s Shrine
Mary’s statue was erected at the same spot where a vicious killer was once executed – so as to have Mary protect the locals from similar atrocities. A status of Virgin Mary was erected on top of a tall column, surrounded by Baroque statues of St. Rocus, St. Florian and St. Joseph from 19th century. 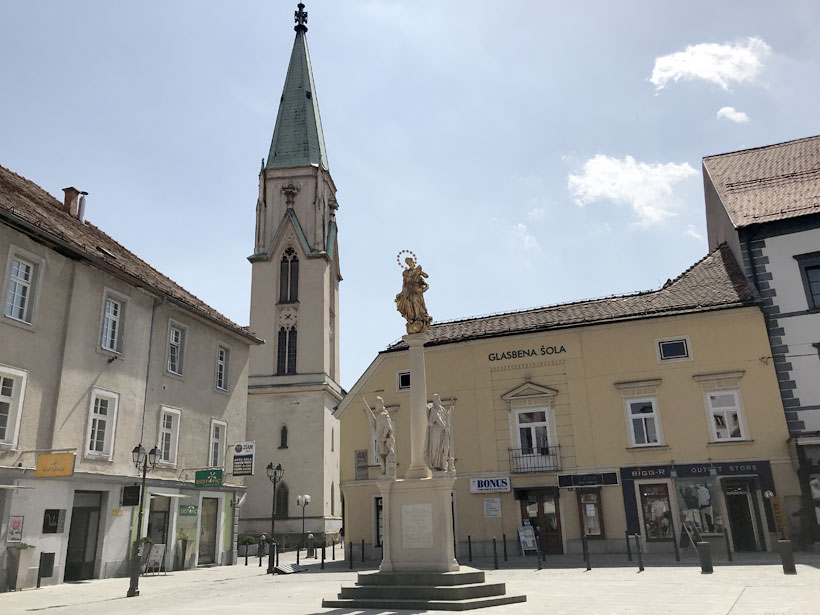 23. Hohenwarter House
An example of a lavish house from Humanism and awakening Renaissance. The Renaissance portal with a Latin and German inscription bearing the years 1543 and 1673 carved one on top of the other is of interest.

24. Archaeological finds at Main Square
During the refurbishment of Galvani Trg (Main Square), the rooms of two urban Roman villas and a Roman road with colonnade-covered pavement were examined. The two villas were lavishly furnished with wall paintings, floor mosaics and a hypocaust system.

25. The Well
The stone well of approximately 1.40 meters in diameter was discovered in 2013 during construction work. Supposedly dating from the Late Roman period, the coat of arms with three stars and year 1781 can be observed on the upper rim. 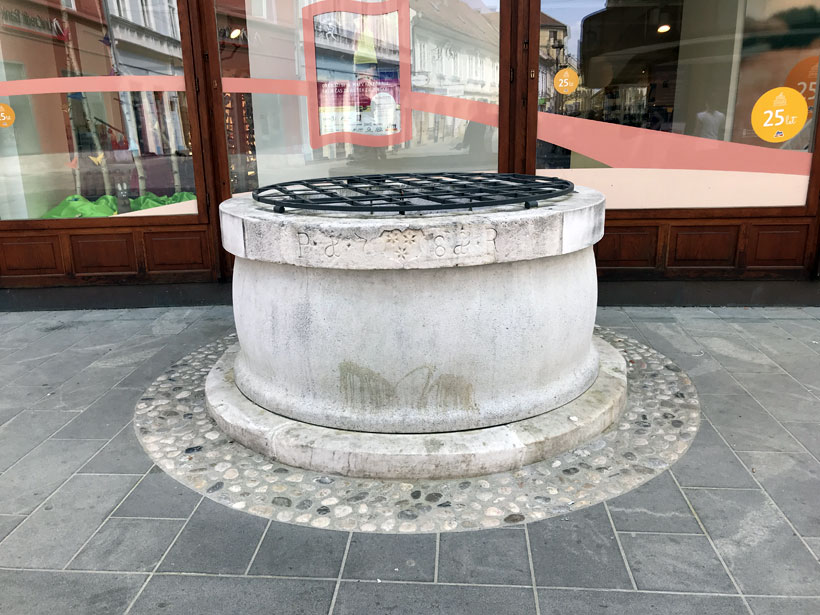