Update: – The United Kingdom followed the U.S. in preventing passengers on direct flights from six countries in the Middle East and Africa from carrying almost all types of electronic devices in the cabin.

The new restrictions on direct flights to the U.K. include flights from Turkey, Lebanon, Jordan, Egypt, Tunisia and Saudi Arabia.
But some airports covered by the U.S. ban – Abu Dhabi and Dubai (UAE), Doha (Qatar), Kuwait City (Kuwait) and Casablanca (Morocco) – are not affected by the U.K. restrictions.

Effective today, passengers arriving to any U.S. airports on direct flights from eight Middle Eastern nations are required to place most electronic devices, including laptops, tablets and cameras, in checked baggage under stepped-up security measures, and not allowed in cabin bags. Smartphones can be carried in the plane’s cabin, but nothing larger.

There is no indication whether portable battery packs or noise-cancelling headphones will be allowed or not.

The measures took effect Tuesday morning and cover about 50 incoming flights a day from the eight countries — Jordan, Egypt, Turkey, Saudi Arabia, Kuwait, Morocco, Qatar and the United Arab Emirates. The measure does not cover flights leaving the U.S.

As NPR cited – “The U.S. officials said the airplane restrictions are based on intelligence indicating that terror groups are still plotting to blow up civilian planes. The officials stress that the latest measure is not related to the president’s executive order, but it’s certain to draw comparisons amid the ongoing political and legal battle over Trump’s immigration order.” 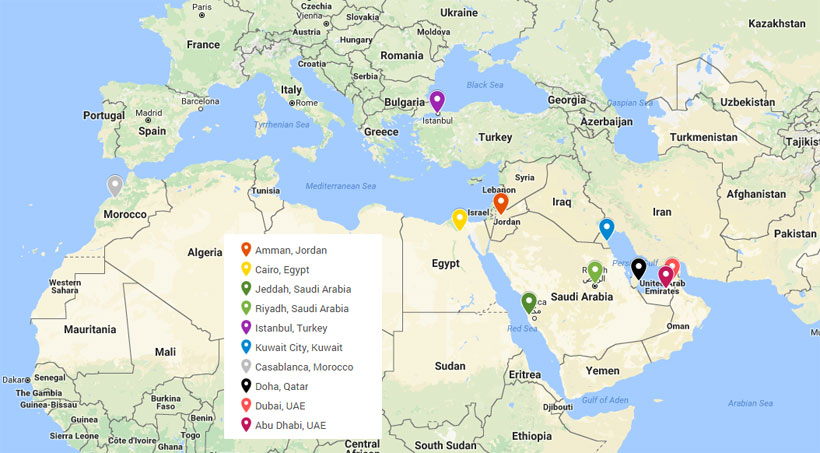 The measure is open-ended and will be reviewed periodically. It covers 10 airports in the eight countries:

The procedures will affect these nine airlines ONLY: Royal Jordanian Airlines, EgyptAir, Turkish Airlines, Saudi Airlines, Kuwait Airways, Royal Air Maroc, Qatar Airways, Emirates, and Etihad Airways. This means that passengers on a Delta Airlines flight from Dubai to San Francisco will not be affected by this ruling.

That list includes every major travel hub in the region except Israel’s main airport just outside Tel Aviv. There is no official announcement on this regulation on the Department of Homeland Security’s website yet.

Essential medical devices and smartphones will be allowed into the cabin. But larger items, including laptops, tablets, cameras, DVD players and electronic games will have to be checked. This will definitely increase thefts of electronic items from bags so we recommend getting travel insurance if you’re flying on these routes.

« Riyadh Experience: Where to Eat, Shop, and Stay
How I hitchhiked from San Jose to Quepos in Costa Rica »