The Sun Festival occurs at two distinct dates, on 22 October and 22 February. These dates are believed to signify the birthday of the Ramses II and the day he ascended to the throne. On each of these two days, when the sun enters the temple at dawn, the rays illuminate the statues at the back wall only, except for Ptah, the god of the underworld.

Although the dates have moved ahead by a day each, because of the astronomical errors from ancient times, it is quite a feast for your eyes to see the natural light falling on the statues at the back of the temple. But getting inside the temple at the right time is almost impossible!

You have a window of 30 minutes to see the spectacle after which, although the sun light still falls on the statues for another two hours or more, that special morning sun hitting them directly is seen only within that initial 30 minutes. 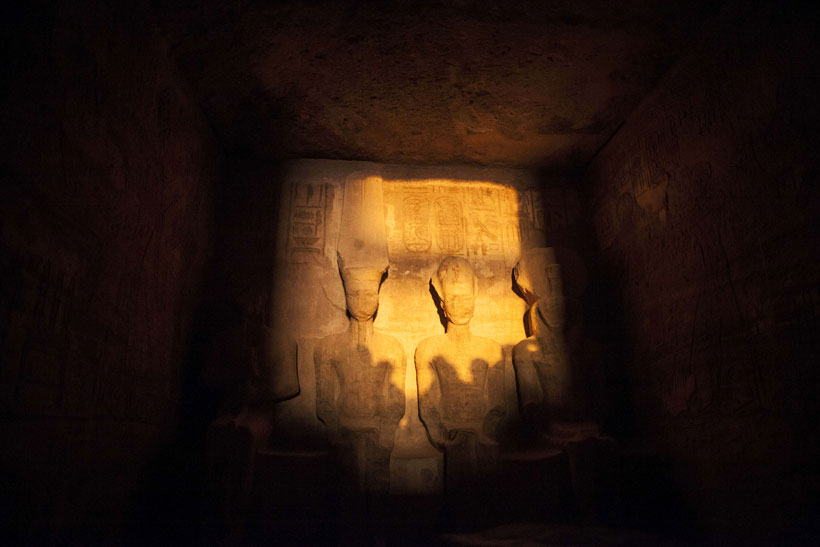 [First rays of sun falling on the statues at Abu Simbel, during the Sun Festival]

With thousands of tourists and locals visiting the temple during these two days, things can get real messy and fights are bound to occur almost for sure. My tour guide had warned me of the terrible things that can happen visiting the Abu Simbel temple during the Sun Festival – from pushing, groping, pinching, missing bags or wallets to serious fighting and cursing from the locals. And all of these did happen while I was there.

Most tours start at Aswan at around 3-3:30am, taking three hours to reach Abu Simbel. But on the day of Sun Festival, the tour company will pick you up at just after midnight so that you get in line as early as possible. Once we started off at 12:30am from Aswan, we were stopped on the highway just outside the city because the authorities don’t open the highway until 1am. This made us reach Abu Simbel just after 4am.

Is it worth visiting Abu Simbel temple during the Sun Festival? Yes and no. I will tell you why:

First: The security line
Arriving at Abu Simbel temple will make you go through metal detectors as a security protocol. This means you will be passing through a metal detector, while your belongings go through scanners. Sounds simple? Not so much. There are separate lines for women and men, but the word “lines” should be loosely taken here. It is wise to put all your belongings in your bags before even getting in the line, because every person is squishing through the lines to get inside the temple complex, with no real line!

After you’ve ‘cleared’ walking through the metal detector, and a quick pat check, you will be waiting around a lot of people shoving each other just to get your bag from the scanner. One Spanish couple I met later had their bag picked up by someone else, which made them lose not just their breakfast boxes, but their money and passports. A woman of another family from Brazil that I met later was profusely crying because she had been groped and pinched while standing in security line! Yes, in the women’s line. By men standing on the side!

Second: The entrance to temple line
After reaching the main area, you will face the mob of crowd lined up on a narrow strip of raised platform to enter the temple. Again, there is no specific line here and everyone is pushing in to get a spot in this line. After a while, the new people joining in the main area start to move in to the platform from all directions, trying to squeeze in between the already packed podium. 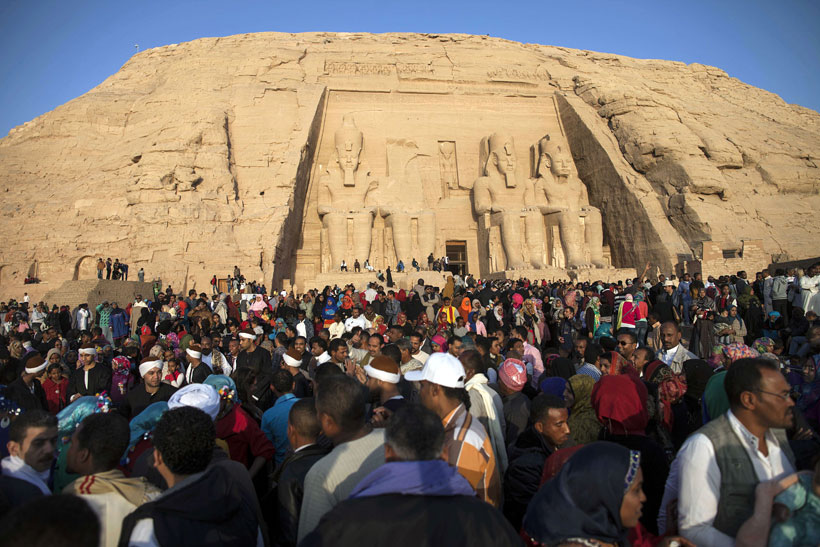 Once the doors open at 6:00am, the crowd in the line push everyone not to leave any space between two persons, so that the others can’t squeeze in from the sides. This is when things go crazy! People told us later on how they were groped, pinched and also robbed of wallets and phones.

It is important to mention here that reporters from news channels and press, along with some elites are allowed to go in the temple before anyone else. Also, if you prefer not to go through the craziness of the lines, you can stand in a corner and watch this LED screen that shows the sun rays falling on the statues live.

Alternative options?
On the day of Sun Festival, the tour company will pick you up at just after midnight so that you get in line as early as possible. Once we started off at 12:30am from Aswan, we were stopped on the highway just outside the city because the authorities don’t open the highway until 1am. This made us reach Abu Simbel just after 4am.

If you prefer to avoid that long drive, then stay the previous night in Abu Simbel and reach the temple by 1:30am when they open the monument (not the actual temple). This way you will be the first ones to be in line to enter the temple, making sure that you see the experience you’re there for.

As per some of the tour guides, this phenomena can be seen for at least 3 days after the Feb 22 or Oct 22 dates. But the authorities do not open the roads leading from Aswan to Abu Simbel until 4am, makign you reach Abu Simbel only at 7am. Even if you’re staying in Abu Simbel, you’re not allowed to enter the temple complex before 6:30am, missing out on the experience.

All in all, the best way to experience the Sun Festival is to stay at Abu Simbel the night before and head out to stand in line when the temple complex opens at 1:30am.

But otherwise, it’s a harrowing experience to go through for a few seconds or minutes of the Sun Festival.