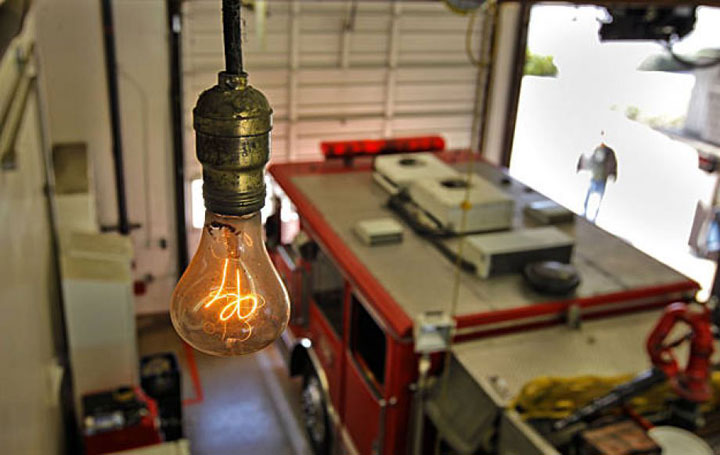 If you’re in the San Francisco Bay Area, then take a road trip for about 45-60 minutes and go to the city of Livermore to see the oldest lightbulb in continuous use.

The Centennial Lightbulb is 110 years old, and is likely the oldest electrical device in continuous use period. Installed in the summer of 1901 by the Fire Department Hose Cart House on L Street when the fire chief had just installed a new modern technological marvel, one of the first electric carbon lightbulbs in town and invited anyone curious to stop by and witness this new invention. This was the “Improved Incandescent Lamp” was the lightbulb of choice and it was an incredible design. In many cities the Fire Departments were motivating people to consider using this relatively new invention for safety.

Watch the bulb in action on livecam

Invented by Adolphe A. Chaillet and manufactured by the Shelby Electric Company, the handblown glass bulb has a uniquely shaped carbon filament beamed a consistent approximately 10 watts. This light bulb has been turned on ever since and the only rest it took was for about 7 days during a renovation and the random power outages over the decades. 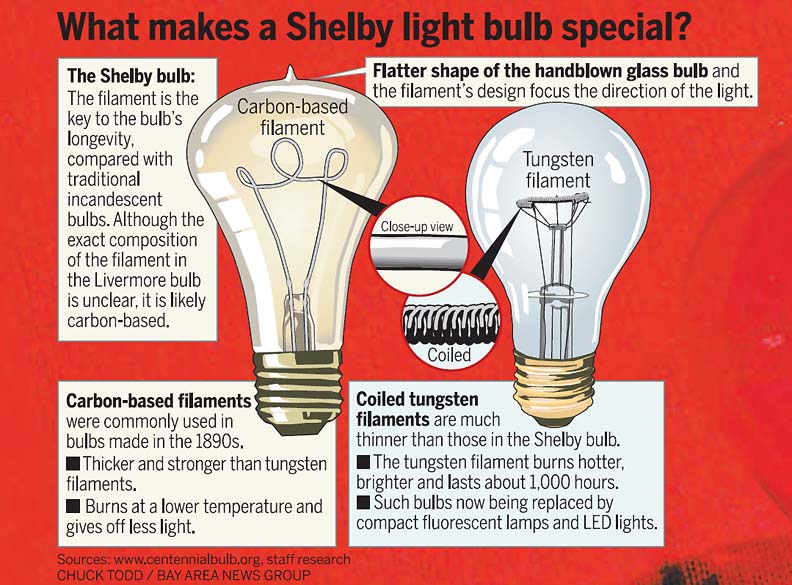 It was first installed in a Livermore firehouse on L Street in 1901, replacing the kerosene lanterns that helped firefighters load hoses and shovels for night calls. At the time, lightbulbs – at least practical ones that lasted more than 12 hours – had been around for only about 20 years.

Between 1901 and 1903, the then-60-watt bulb was moved to a firehouse on Second Street, and then to a new station on First and McLeod streets. For the next 71 years, the bulb languished in anonymity. No one seemed to notice that the bulb never made that telltale pop and fade to black. It was just always on.

When the old firehouse closed in 1976, panic set in when it came time to unscrew the bulb and move it a mile away to the new firehouse on East Avenue. The city’s chief electrician was called in to turn it off, gently unscrew it and place it in a special foam box. It was moved with full police and fire escort, and 2 1/2 minutes later, the electrician screwed it in at the new firehouse. At first it didn’t go on. There was a gasp from the crowd, but then Frank (the electrician), calm as can be, lightly tapped the switch and it came on again. 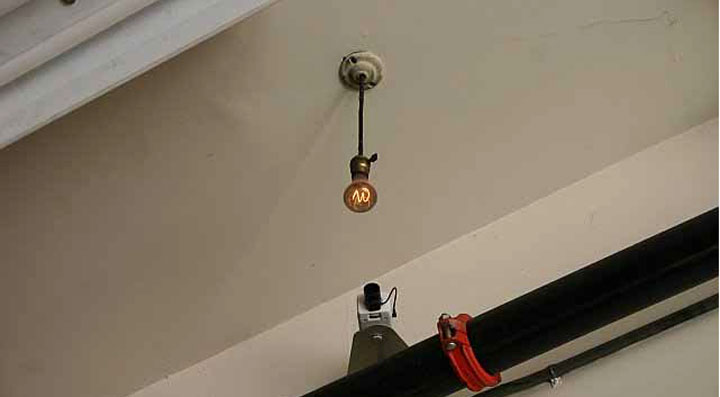 The bulb has been the subject of dozens of news stories, magazines, books and television shows. It’s featured in the Guinness Book of World Records and Ripley’s Believe It or Not. It’s featured in a documentary, “The Lightbulb Conspiracy,” about the planned obsolescence of lightbulbs.

Double-decked tour buses often stop by the fire station for viewing. The guest book shows visitors from China, Germany, Fresno and beyond.

How to visit
You can visit the bulb depending on the availability of the Firemen on hand. Go to the rear of the station and ring the bell. If they are in someone will answer the door. Otherwise you can see the bulb if you look through the window up on the top of the wall to your left. To contact them directly you may call the LPFD at (925) 454-2361.