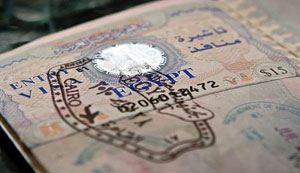 According to Hesham Zazou, tourism minister, the increase is slight and is not expected to affect the flow of tourists to the country.

The decision to increase the cost of a tourist visa to Egypt was previously postponed several times. The decision was initially meant to be implemented in November 2013. It was then postponed to February 2014, and finally to 1 May.

According to the tourism ministry, Egypt’s visa is still amongst the cheapest worldwide.