Right in the heart of Perth’s summer festival season, now is the perfect time to be explore the social scene in Australia’s sunniest city. Rich Keam has tasted his way around the best spots from cafes to food trucks.

In recent years Perth has seen fresh sparks enter its streets. Historic buildings, disused spaces, hidden corners and laneways are being reactivated by passionate and creative entrepreneurs. Small bars, cosy restaurants, late night dining, pop up shops, street food and farmers markets are at the very heart of this change. There has never been a better time to taste what the city has on offer. Better still, many of these new haunts are showcasing Western Australia’s fresh, local and seasonal produce.

Established festivals like Perth International Arts Festival (7 Feb-1 March 2014) have held strong, but many new ones have popped up including Fringe World Festival (25 Jan – 24 Feb 2014) and a multitude of hyper-local street festivals.

Local Laura Moseley, who is a Food Curator for the Beaufort Street Festival, recently took me on a roving food tour of Perth. From the CBD’s King Street and Barrack Street, to Northbridge’s William Street and Cultural Centre, you can eat, drink and relax in the sun. Here is a stop by stop guide to our route, which will introduce you to some of the people at the heart of Perth’s vibrant food scene. 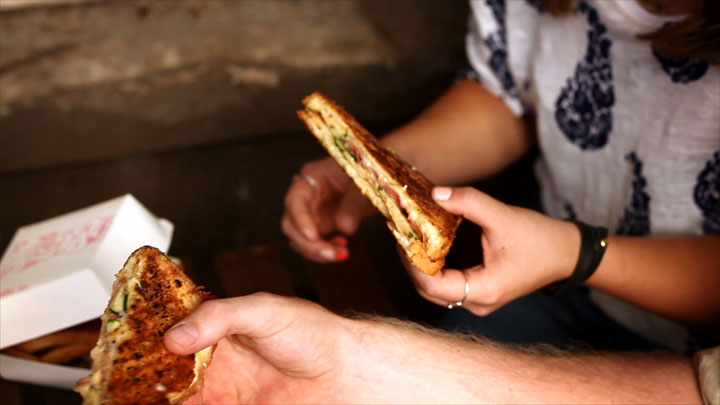 Stop One: Uncle Joes Mess Hall
A repurposed space, fitted out with reused and recycled materials is one of the best places to get a coffee in the city. It also happens to be a Barbers shop as well. A trim and a coffee – what more do you need? Dan Ash of Micrology Coffee Roasters, one of the city’s many micro roastaries, provides all of Uncle Joe’s coffee and is also behind their latest offering: cold drip coffee.

Stop Two: Toastface Grillah
Mike O’Hanlon is part of the Toastface Grillah team. On a laneway between Wellington Street and Barrack Street they are serving up grilled cheese that will change the way you look at the humble toastie.

Stop Three: Delish Ice
Katie Earl is the owner of Delish Ice. She’s progressed from selling homemade ice lollies sold from a vintage caravan to a Pop-Up shop on William Street. She also has two vintage vans, carts and a growing range of artisan ‘ice pops’ – Salted Malted Caramel using brewing wort (the sweet mixture that goes into creating beer) as well as Basil and Elderflower (in which she uses botanicals found in Gin). From children to their grandparents, this summer she’s had people lining up to get a taste of her ice pops.

Stop Four: Kakulus Bros.
Evan Kakulas is the owner of one of Perth’s food and cultural icons. Evan’s grandfather started Kakulas Bros. back in 1929. They started off importing olives from Alexandria and now sell all manner of spices, coffees, teas and cheeses. The shelves contain a mix of local and international ingredients, with an emphasis on the family’s Greek heritage. A visit to Northbridge isn’t complete without picking something up here.

Stop Five: Mechanics Institute
Enjoy cocktails on the rooftop terrace overlooking the city. Famed for its mixology, hip bartenders and daily changing drinks menu, the Mechanics Institute is a key a player in the small bar scene. Order a burger from the downstairs Flipside and your night is complete.

Stop Six: Bivouac Canteen & Bar
In setting up Bivouac with his wife, Anthony Princi was at the start of a new movement of small, indie restaurants on William Street. Much of the produce on the menu comes from their family farm. Make sure you try the gnocchi and the Gingin goat chops.

Stop Seven: Urban Orchard
This community orchard is on top of a car park right in the middle of the city. Locals and visitors are encouraged to pick the herbs and vegetables as well as grabbing a beer and watching the sun go down. As its right in front of the Cultural Centre, it’s the perfect place to go before catching a show in the new State Theatre or relax after seeing an exhibition in the Art Gallery of Western Australia.

See a video guide of this tour.

Rich Keam is originally from Portsmouth, UK. He was one of thousands of entrants to Tourism Australia’s Best Jobs in the World campaign. He arrived in Perth in August 2013 to take up his prize job as Taste Master of Western Australia. Eating and drinking his way around the state… Hard job right? You can follow Rich’s adventures on www.tastewesternaustralia.com on Twitter @richkeam or Instagram @tastemaster_wa

Laura Moseley is a Food Curator for various street fairs, including Perth’s biggest, The Beaufort Street Festival. Laura is well known as the go to girl in Perth for all things food. You can follow Laura on Instagram @lauramoseley82.