If you are traveling to India after April 1, 2014, and exchanging currency to Indian Rupee either in or out of the country, make sure to check every single note before you accept it. The Reserve Bank of India (RBI) has said that all currency notes issued prior to 2005 would be withdrawn from March 31, 2014.

From April 1, 2014, the public will be required to approach banks for exchanging these notes. 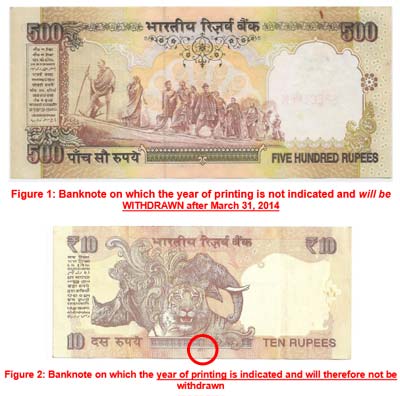 Will pre-2005 notes have no monetary value after 31 March?
Although these will continue to be legal tender, they will be accepted only in banks and not businesses. This means currency would hold monetary value but would be only acceptable at banks where the public can exchange the notes.

How to exchange pre-2005 notes?
Old notes will continue to be legal and can be exchanged in any bank after April 1. However, from July 1, 2014, persons seeking exchange of more than 10 pieces of Rs. 500 and Rs. 1,000 notes will have to furnish proof of identity and residence to the bank. If you are an account holder of the bank, these proofs are not needed.

Why the RBI is withdrawing notes issued before 2005?
Reserve Bank of India (RBI) Governor Raghuram Rajan said the notes issued after 2005 have greater security features, following which the Finance Ministry sought withdrawal of the pre-2005 notes.