While I was in Battambang, the second populous city in Cambodia, I read about the half- and full-day bicycle tours offered by many local companies that will ride you to some of the small villages around the city. With great reviews on TripAdvisor and Lonely Planet forums, I decided to sign up for a half-day tour with Soksabike (the name is a play on the Cambodian greeting Sok Sabai which roughly translates to Are you well?), which is a social business where benefits of the tour are distributed to the local people you meet during your tour.

The team of tour guides speak English quite well and are professional in handling the safety and well-being of the tourists. The half-day tour (also called the ‘Half-day Local Livelihood tour’) costs US$27 and the full-day tour costs US$40 per person. There are different rates for kids and young adults. If you are more than 5 persons per tour then they may give you a discount on the final price. We were six adults in the group so per person cost was US$23.

Total time of the tour: about 5 hours.
Level of effort: Easy and relaxed with winding, bumpy roads.

Soksabike offers free tuk-tuk pickup from your hotel by letting them know during booking or prior email. Note that this is only a pick-up offer, which means that you have to find your way back after the tour. We assembled at the Soksabike office at 7:30am where coffee was served (free as a part of the tour); and after a quick orientation (what-tos, how-tos and a cheat sheet of Khmer 101), we picked our bicycles and headed out.

Preparations for the tour
Before we move on with the tour, here are some tips on what you need for this tour:

Highlights of the tour

First stop – Rice Paper preparation
After making our way out of the main city center by riding for about 15 minutes, we reached the home of a family of five people that make rice paper. This ‘paper’ made of rice-liquid is mainly used in spring-rolls. The process is to soak rice in water for a few days and then drain the rice water into a container. 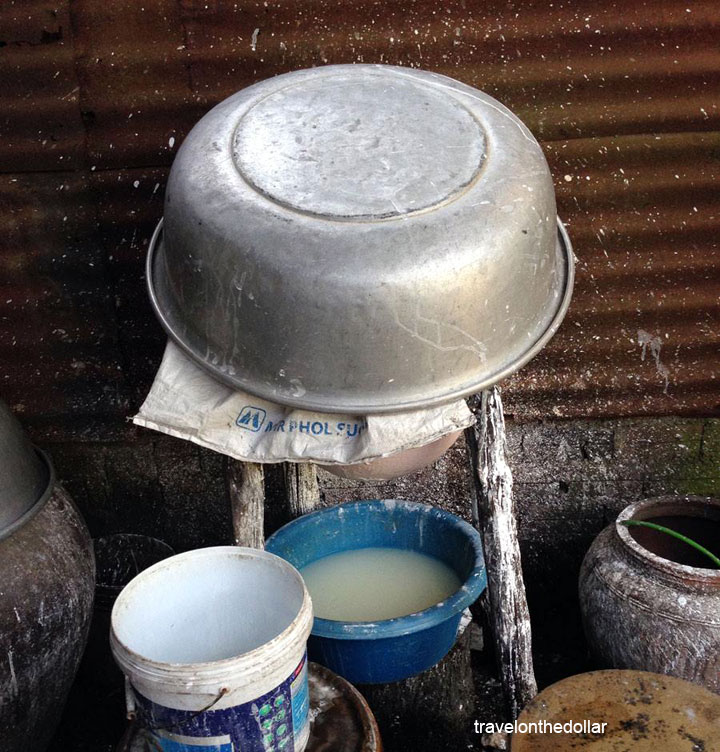 Once the rice water is drained, the woman takes a small amount and spreads it across the hot stove, and after leaving it for a few seconds, scrapes it using a wooden stick and places them on a roll-pin which is always soaked with water.

Her husband lifts them with another wooden stick and spreads them on a huge wooden plank that is used to dry the paper in the sun for a few hours. You get to have hands-on experience preparing the rice paper, but make sure not to sit for long because the locals are on a ticking clock and every minute you spend there reduces production for that day. 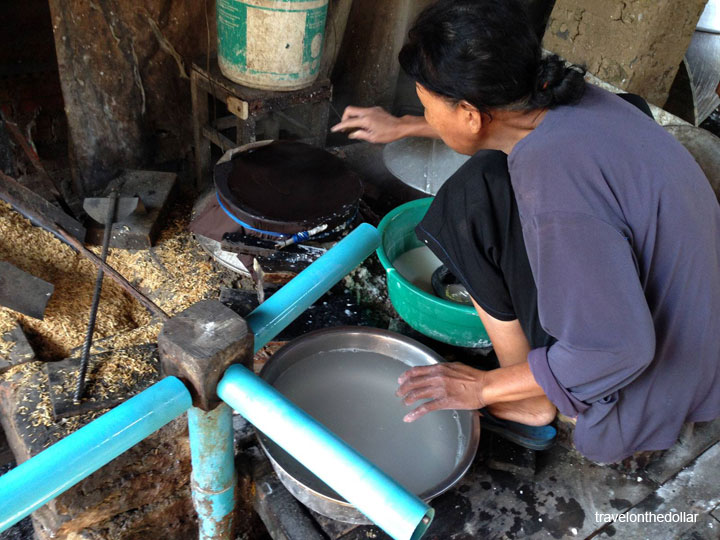 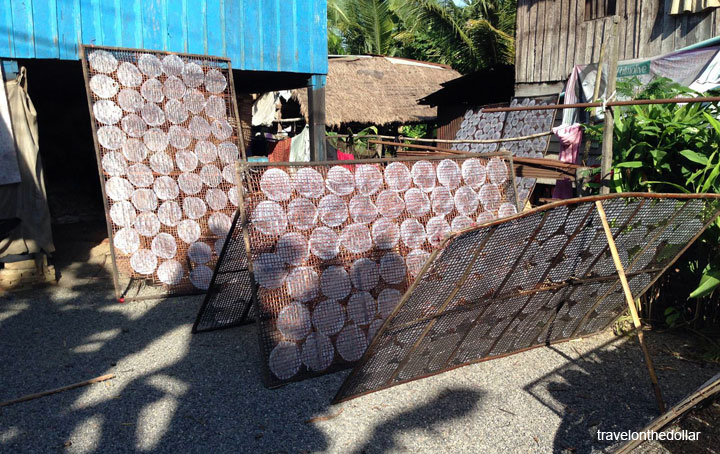 Second stop – Dried Banana preparation
Another five minute bike ride and you arrive at a second stop that belongs to a family in the business of dried banana. This is a simple process – just slice the (yellow) banana very very thin and place them on wooden boards; and allow them to dry in the sun for 5-6 hours.

Again, you get to sit and peel the bananas but getting those really thin slices is not an easy task! Try it. 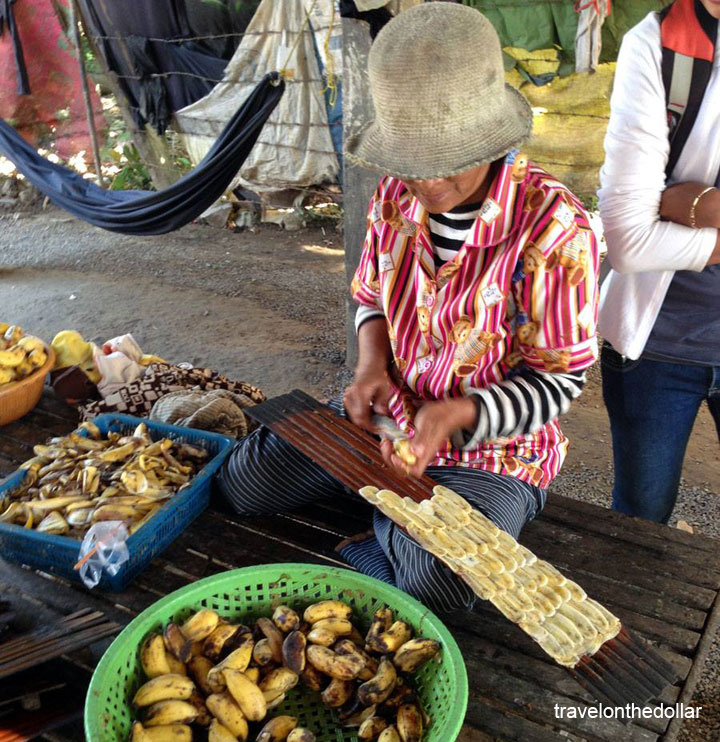 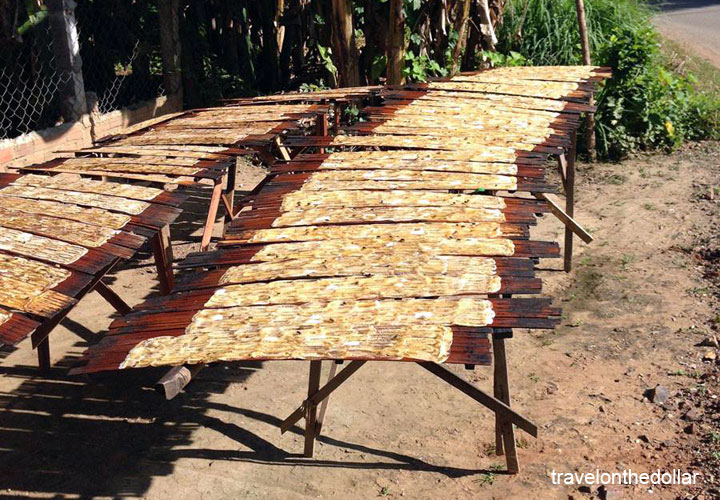 Third stop – Rice wine preparation
As soon as you enter this family-owned business, you will be given a taste of two similar rice wines – 20% alcohol and 40% alcohol. This is fresh rice wine and tastes really good. The process of making this long unlike previous stops and involves cooking the rice in water for a few hours, and then spreading it out for drying. 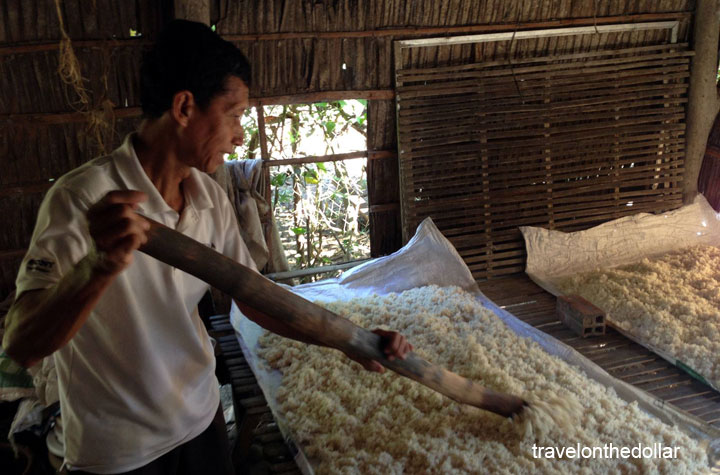 The cooked rice is then packed in plastic drums; soaked in water, salt and sugar, and yeast is added for fermentation. This is then allowed to ferment for two-three days, after which the contents are filled in to huge steel drums over a furnace (powered by the rice husks).

The steam from this furnace is collected at the bottom of a stone tank filled with cold water, which is the final rice wine. 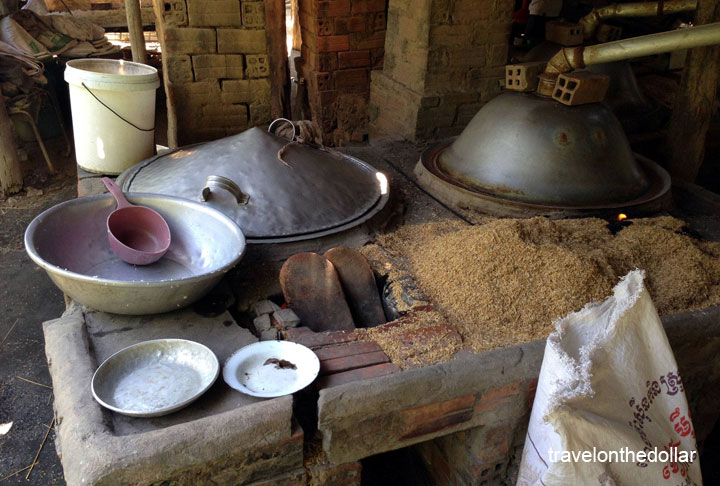 Fourth stop – Rice paddy fields
After a long ride, we reach the huge paddy fields of rice. You get to learn a lot about processes of growing rice and who’s-involved-when for each of those steps. 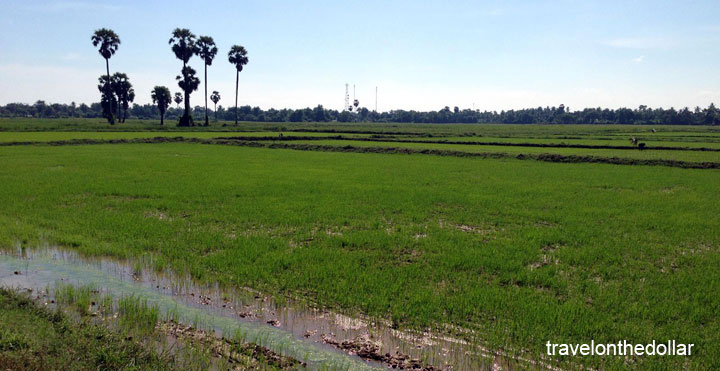 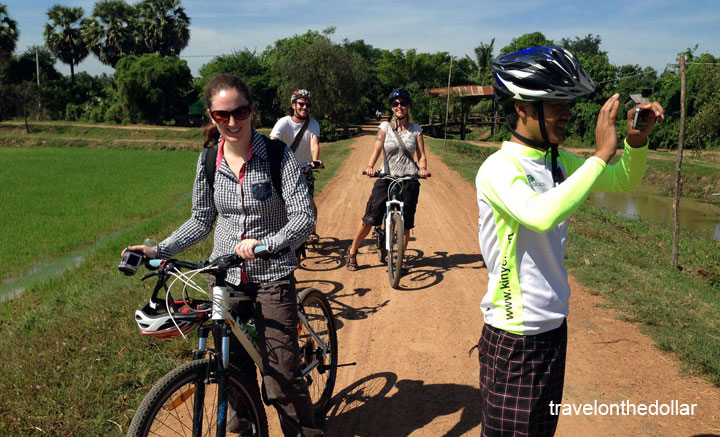 Fifth stop – Fish paste preparation
The ride from the paddy fields to the fish market follows the muddy, bumpy road along the Sangkae river. The smell of the fish market can be overwhelming because of the fish left to rot in the massive stone containers filled with water and spices. The outcome is the fish paste used in preparation of traditional Khmer and Vietnamese cuisine. 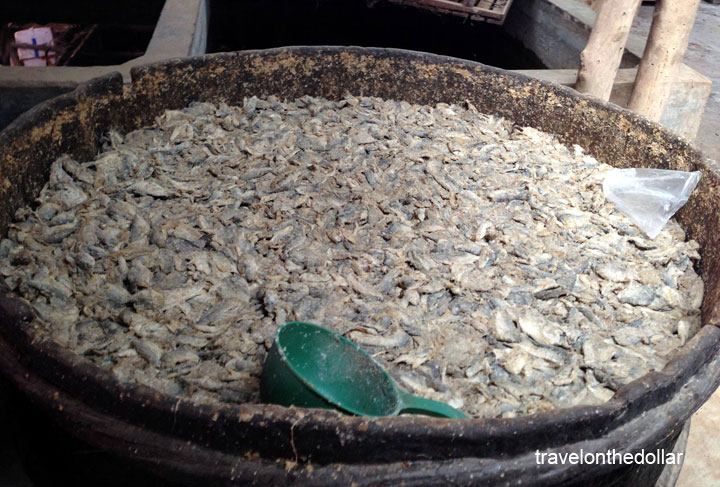 Sixth stop – ‘fruits’ break
This is when you reach a guesthouse where a platter of traditional fruits is served to you. Make sure to drink the fresh coconut juice while you enjoy bananas, guavas, pineapple and chikoo. This is a much-needed one hour break. 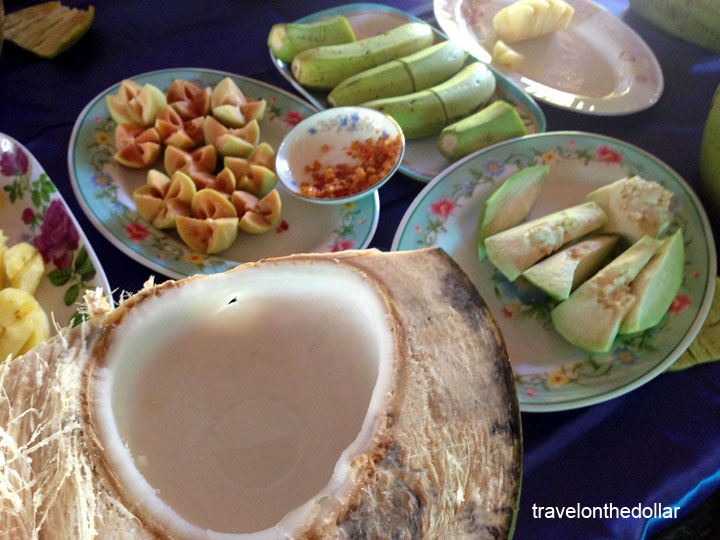 Seventh stop – Rice bamboo cake snack
The ride after the snack seemed longer because of the two unexpected and quick stops to witness a traditional Khmer wedding. We are not posting any pictures here to protect the identity of the couple and their guests (as asked by them!). The wedding was held within a huge tent built right in the middle of the street with blaring music that can be heard kilometers away.

Up next on the tour was a shop and preparation “factory” (as they called it) of rice snacks in a bamboo-shoot. This is a traditional snack of Battambang province made of rice, sugar and salt, topped with black beans. The process of making this snack is simple, but the labor involved in chopping the final bamboo cylinder is tough. 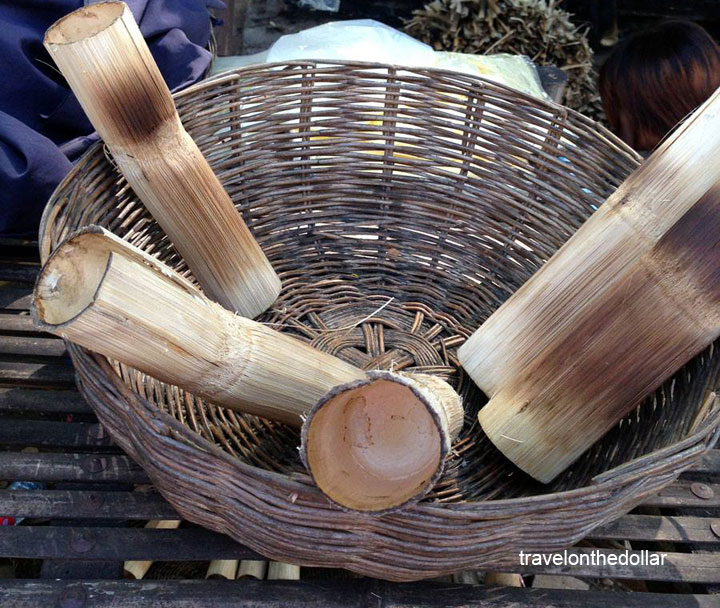 Cooked rice is dried to a certain level and mixed with sugar and salt. This is then stuffed inside a bamboo trunk, topped with some cooked black beans and covered at both ends. The trunks are then laid on steam furnaces to cook for two hours. 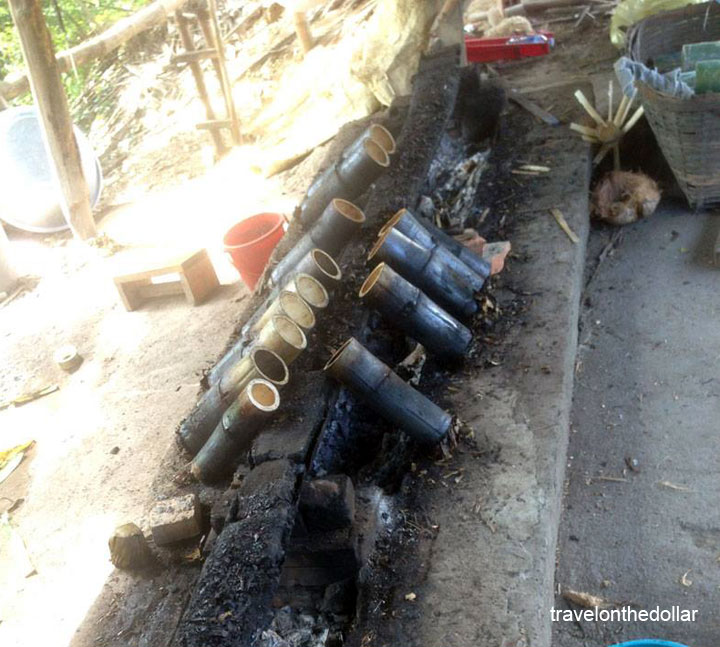 Locals then chop off the bamboo making the sides thin enough for anyone to just peel with hands and then eating the rice with hands. The snack is delicious and filling. Depending on the size of the bamboo, it can cost anything between $0.50 to $1.50 for each bamboo snack. 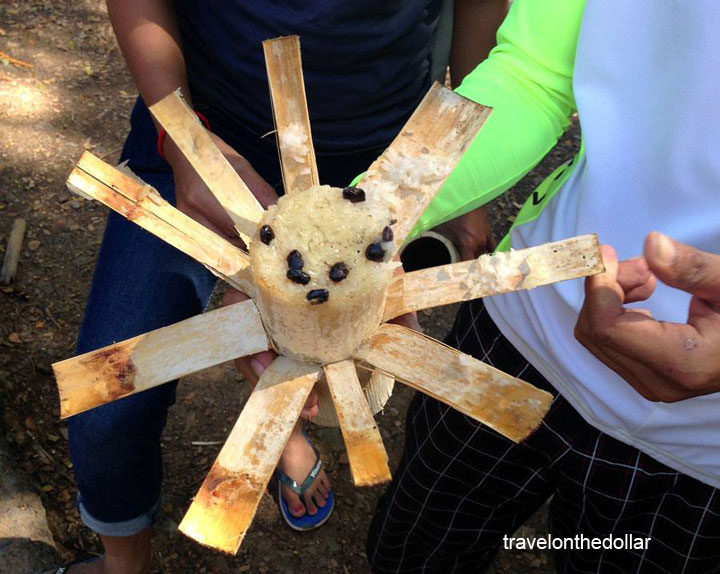 You can see the bones and skulls of the victims in the glass-enclosed tower in the memorial. 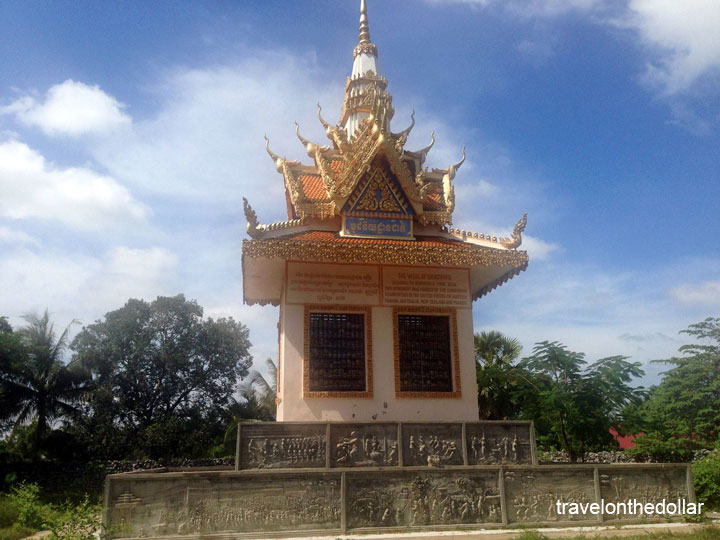 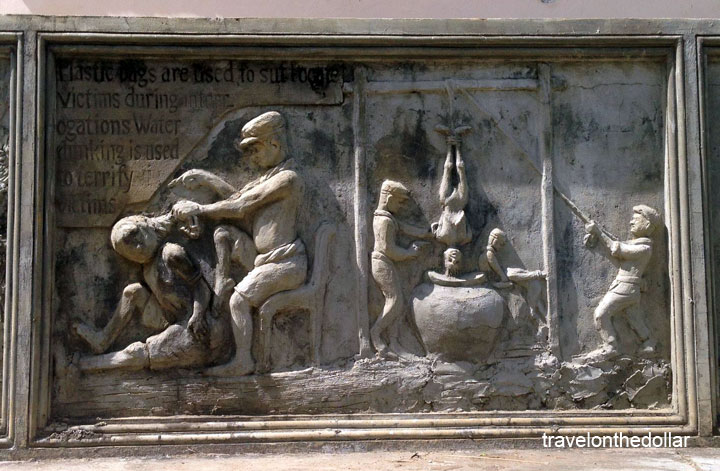 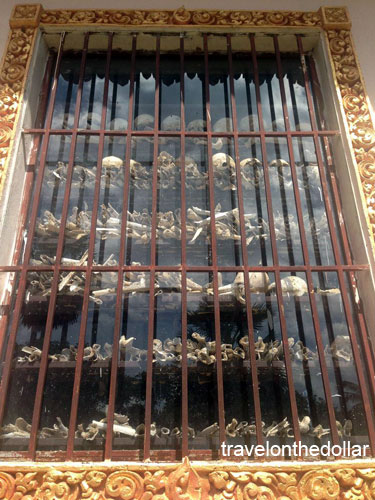