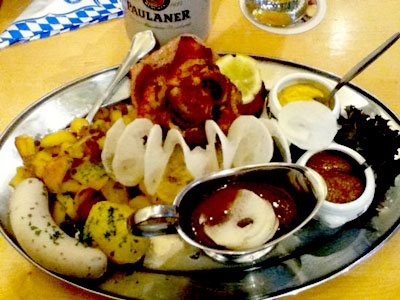 If you are flying via Frankfurt Airport (FRA) in the next few days, then make sure to stop by the Terminal 1’s concourse “Z” for Oktoberfest celebrations until October 6. Designed in style for this popular annual festival, concourse “Z” will feature brass-band music, traditional Bavarian costumes, and schuhplattler-style folk dancing to create the atmosphere of the Oktoberfest beer tents.

Considered the world’s largest and best-known popular festival, Oktoberfest takes place every fall in Munich. Travelers from all around the world attend this celebration of beer and Bavarian culture. Smaller Oktoberfest events are also held in other parts of Germany, so it makes perfect sense to spread the Oktoberfest cheer at Germany’s largest aviation gateway, Frankfurt Airport.

FRA’s restaurants are serving white sausages and other Bavarian specialties. Wheat beer, fresh from the keg, is a “meal” in itself. Passengers can also pose for their own festival photographs behind an Oktoberfest prop that has been set up in the concourse “Z” shopping atrium.

Amongst many of the celebrations at this global hub, shopping assistants are handing out coupons to travelers that can take advantage of a “two for one” promotion at participating airport restaurants, allowing them to order a second drink free of charge. At the “deutsch” restaurant, free hearty wheat-beer is served with every entrée when you present the corresponding coupon. The Rheingold Bar provides a Bavarian meal consisting of white sausages, giant soft pretzels, and half a liter of beer for only 10 euros (instead of 12 euros) when presenting one of the coupons. In some airport boutiques, shopping coupons entitle you to a 10 percent discount. For example, you can buy a traditional German dirndl dress – which many of the ladies at Oktoberfest wear.