The mountain ranges of Himalayas are a blessing to India. They moderate the climate of India by acting as a barrier to extreme cold and hot winds emerging out of central Asia. Various forms of flora and fauna flourish on the slopes, in peaks and valleys of the Himalayas. Major rivers of Northern India find their origin in the mighty glaciers of Himalayas.

The life sustaining Himalayas are also a place of immense beauty and adventure. People come here to find peace, rejuvenation and an opportunity to indulge in the activities which promise to thrill them to the core.
In winter season, the snowfall makes the already beautiful Himalayas, alluring. It also makes the area appropriate for certain sporting activities like skiing, trekking, sledging and the like.

Following are certain adventure activities which are enthusiastically undertaken by the adventure seekers:

Heli Skiing
In Heli Skiing a helicopter drops the skiers on the top of a snow covered mountain from where they have to ski their way downward. It is a risky way of seeking adventure as the fear of avalanche always looms large but the thrill of a heli-ski is quite superior to any of the winter sports. One gets an opportunity to venture into inaccessible slopes; can also click pictures of the breathtaking views from the helicopter and it will also take very less time to go up the mountain. 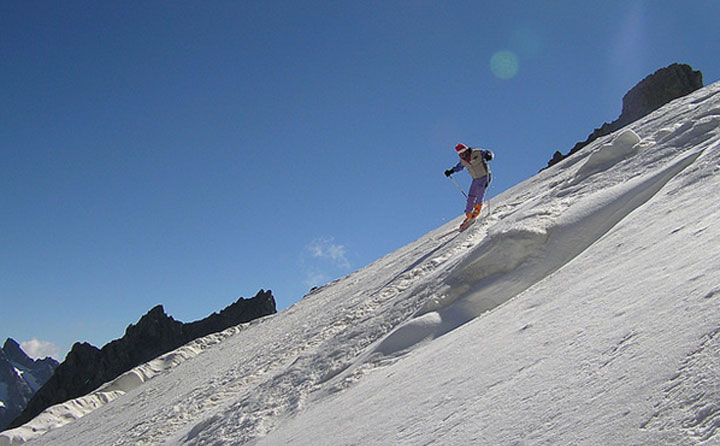 Skiing is an activity in which skis are attached to shoes and this helps one to walk or slide down the snow clad surface of a mountain peak. A higher point, in the mountain, is reached through cable cars. One can add on to the dose of adventure by combining snow skiing with Himalayan Snow trekking.

Snowboarding
It involves going down a hill standing on a board which is attached to the feet of the rider. The creation of snowboard has been inspired by skateboarding, surfing, sledging and skiing.

Some of the fun sports, which can be undertaken even by children, are Ice-Skating, Tobogganing or Sledging and Ski Bobbing.

There are many places to get engaged with winter sports like Kufri , Pahalgam, Dayara Bugyal, Munsiyari, Manali, and Mundali. Below mentioned are three of the most famous winter sports destinations in Himalayas:

Gulmarg
At about 50 km from Srinagar, Gulmarg is a part of Himalayas which receives one of the heaviest snowfalls. It is also famous for being one of the best places to ski. It is placed in the Baramula district of Jammu and Kashmir.

The skiing season begins as soon as the snow falls, which is usually in the month of December. The skiing continues till March (sometimes till April). Various adventure activities can be undertaken over here, like snow skiing, heli skiing, sledging and skibobbing.

Solang Valley
Placed in between Beas Kund and Solang village, Solang valley is at a distance of 13 km from Manali. The valley gives a very picturesque view of the snow-covered peaks and glaciers which surround it. Both summer and winter adventure sports, like Parachuting, skiing, paragliding and zorbing are organized over here.

There are a few agencies which impart training and equipments for the purpose of skiing. A winter skiing festival is also held each year to popularize the sport.

Auli
Auli is a small hill station in the Chamoli district of Uttarakhand. It is a famous ski destination. This ski resort is managed by Garhwal Mandal Vikas Nigam Limited (GMVNL). The agency provides food, accommodation and ski training to the guests. An international skiing competition is held annually to promote the sport in India.

Winter sports in Himalayas are a great tourist puller. Both local and foreign sport enthusiasts hover around the Himalayan range of mountains to make the most of their winter vacation. Indulging in the winter sports among the hills is the best way to relish nature along with sports.

Author Bio:
Rikki Paul is professional writer and traveler. Passionate for adventure travelling, he has no boundaries to explore thrilling travel places over this globe.