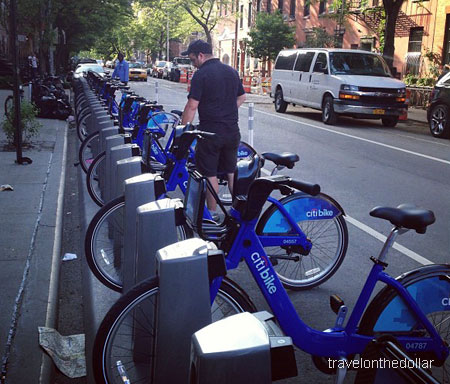 Leading off with 6,000 bikes at more than 300 stations, the program allows riders to unlock the three-gear, cruising-style bikes from any station, take them for a 45-minute ride and return them to any rack.

Plans are to expand the network to 10,000 bikes at 600 stations soon. One of more than 500 bike-sharing systems around the world, New York’s is the biggest in the United States.

While many New Yorkers already do without cars, city administration has added hundreds of miles of bike lanes and promoted cycling as a healthy and environmentally friendly alternative to driving. Officials see bike-sharing as a big next step.

Citi Bike subscribers pay a $95 annual fee (plus tax) for unlimited rides of 45 minutes. Starting June 2, riders also will be able to buy a 24-hour pass for $9.95 and a seven-day pass for $25; both allow for an unlimited number of 30-minute trips. The usage time is logged when a bicycle is returned to a dock, with additional charges if the bikes have been out past the allotted time.