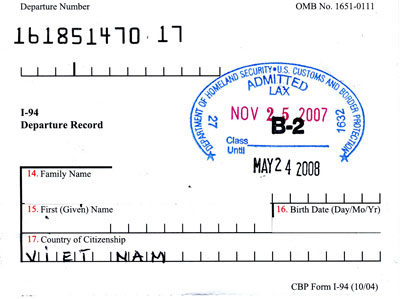 April 26, 2013 will see a change in lawful admittance of non-immigrants in united States. The U.S. Customs and Border Protection (CBP) published new rule for passengers arriving in the U.S. – the standard Form I-94, which serves as the arrival and departure record and is stapled to passengers’ passports, will soon be automated and in electronic form only.

The CBP however clarified that individuals who go through “secondary inspection,” which is a closer examination of personal effects and travel circumstances, “will be provided a paper copy of Form I-94 by a CBP officer.” This would apply to such as asylees, refugees, and parolees, as typical examples. This change, which is an “interim final rule,” in the arrivals procedures, is aimed at streamlining the admissions process for non-immigrants arriving in the U.S.

Until now, typically, arriving non-immigrants, known in U.S. immigration parlance as “aliens,” present the completed I-94 form to the CBP Officer at primary inspection. The officer stamps the Form I-94 and the passenger’s passport, detaches the bottom portion of the form, which is the departure portion, and returns it to them along with the passport. The admission stamp contains the port of arrival and date of arrival, is annotated with the class of admission and admitted-to date.

The top, arrival portion of the form would usually be sent to a data entry facility, where the information on the form is entered into CBP’s computer systems and the lower, departure portion of the Form I-94 retained by the passenger may be shown to government or other stakeholders when required.

However with the implementation of what is called the Advance Passenger Information System (APIS) CBP now collects information on “aliens travelling by air or sea to the U.S. electronically from carriers in advance of arrival.” Since nearly all the information collected on the Form I-94 is collected electronically via APIS, CBP also now uses the electronic system to document an alien’s arrival and departure in advance.

The few fields on the Form I-94 that are not collected via APIS are either already collected by the Department of State and transmitted to CBP or will be collected by the CBP Officer from the individual at the time of inspection, the CBP clarified.

You can read the 56 page PDF rule here

There are still no clarifications from CBP on what date to be used as the maximum length of stay in U.S. (maybe the stamp in passport?) or what is considered a valid document to obtain a drivers license? We will just have to wait and watch.