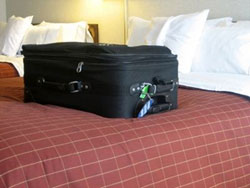 Bags are delivered by BagsVIP and will initially be available to customers departing from any domestic airport and arriving in Boston, Chicago, Honolulu, Houston, Los Angeles and Orlando. The airline plans to expand the service to more than 190 domestic airports in the coming months.

Delivery is available up to a 100-mile radius for an additional charge that varies by distance. Delivery pricing is in addition to any standard checked-bag charges that might otherwise apply.

The airline plans to expand the service to more than 190 domestic airports.