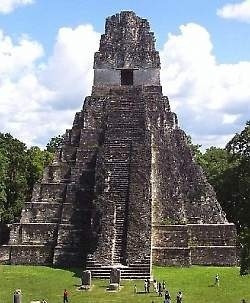 While we will be at the Tikal temples in Guatemala in the next few days as a part of our travel across Central America, this comes as a shock to us that tourists flocking to Guatemala for “end of the world” parties have damaged an ancient stone temple at Tikal, the largest archeological site and urban center of the Mayan civilization.

It is forbidden to climb the stairs at the site but some tourists climbed the Temple II and caused irreparable damage to the ruins.

Temple II, which is about 38 meters (125 feet) high and faces the central Tikal plaza, is one of the site’s best known structures.

More than 7,000 people visited Tikal on Friday to see native Mayan priests hold a colorful ceremony and light fires as the sun emerged to mark the new era.

Critics complained that the event was really for tourists and had little to do with the Mayans. About 42 percent of Guatemala’s 14.3 million residents are native Mayans, and most live in poverty and endure discrimination.

The ancient Mayans reached their peak of power in Central America between the years 250 and 900 AD.