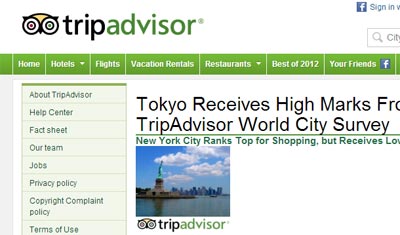 TripAdvisor announced the results of its Cities Survey, a look into how travelers and locals view 40 key tourist cities around the world. The results were compiled based on more than 75,000 responses to a survey sent to those who have recently written TripAdvisor reviews on the featured cities.

While New York City was ranked top for shopping, travelers felt the city streets could use a sweep as the city ranked 28 out of 40 for cleanliness. Global respondents also believed visiting the Big Apple may break the bank as it is ranked 32 out of 40 for value.

« Decide your next destination based on the budget, using Flocations
Vimeo’s top travel-themed videos will inspire you to travel »