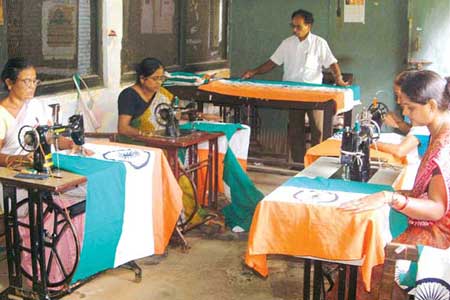 Every time I visit a country, the one souvenir I never miss to buy is that country’s flag – and that too a big one. It’s just my way of checking off on the bucket list.

Recently, on a trip to South America, I met with a fellow traveler from São Paulo, Brazil who seem to be collecting flags of every country she visited. And one of the things she mentioned got my attention – not every flag, actual flag, is made of satin or any other form of cloth. Different countries have laws on what kind of cloth should be used to make the flag, and how and where to hoist them.

You can get any flag at most souvenir stores around major cities in the world, but India is one country where, if you’re looking for an original flag, you can buy it from a very specific store. The flag, by law, is to be made of khadi, a special type of hand-spun cloth of cotton or silk made popular by the father of the nation, Mahatma Gandhi. The manufacturing process and specifications for the flag are laid out by the Bureau of Indian Standards. The right to manufacture the flag is held by the “Khadi Development and Village Industries Commission”, who allocate it to the regional groups. As of 2009, the Karnataka Khadi Gramodyoga Samyukta Sangha was the sole manufacturer of the flag.

In short, if you want to purchase an Indian flag as the souvenir, you will have to look out for the Khadi Bhandar or Khadi Gramudyog stores at the city you’re visiting. Not all cities and towns may have these stores, but most metro cities has them. And most locals, taxi drivers or post offices may know the address to the store.

Apart from the Indian flag, you can also purchase authentic and cheaper (than other stores) artifacts, sarees, handicrafts, jewellery and sandalwood.

Here are the addresses of Khadi Bhandar stores in metro cities of India: