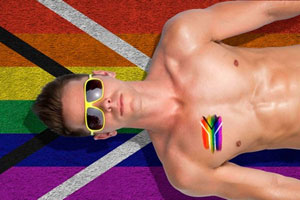 Perfectly sculpted bodies lie poolside at The Glen, a guesthouse that’s the first listing on the Pink Map to Cape Town, handed out at the airport for the 225,000 gay tourists who visit every year. Gay culture has flourished since the fall of apartheid, which harshly penalised homosexuality, as South Africa enshrined equal rights in its constitution and allowed same-sex couples to marry and adopt.

But no city in the country, or on the continent, has moved as aggressively as Cape Town to tap into “pink” tourism dollars, presenting itself as a model of tolerance and a magnet for international gay tourists.

“The gay market is definitely one of the niche markets that we look at,” said Skye Grove, spokesman for Cape Town Tourism, the city’s promotion agency. “They have a lot more disposable income than non-gay tourists.” Of the city’s 1.5 million annual visitors, about 15 percent are gay, she estimated, many of them white men.

The austral summer draws snowbirds from northern climates, and Cape Town’s reputation for tolerance makes it appealing for gay travelers. In many ways, gay Cape Town is an island where tourists can hold hands or kiss in the street.

In many residential parts of the city, both white and black, where tradition and religion remain strong influences, gays are treated with disdain or violence. Lesbians face a horrific incidence of rape, aimed at “correcting” their sexuality. For tourists, that’s a world away.

Cape Town has a wide range of offerings, urban and bucolic, from mostly gay to comfortably mixed nightclubs and restaurants. Some of the marketing can be over the top. “Basically, some put a rainbow flag on the balcony, but it doesn’t mean that they will give a good service,” said Evan Tsouroulis, who runs a local gay magazine.

Word about the city has got around, but it’s not cheap. Ten years ago, Cape Town was fairly unknown as a gay destination, and it was very cheap. That has changed. Also, Cape Town used to have a competitive advantage as being cheap, not anymore. It is not cheap to fly here and accommodation has become more and more expensive.

Gay-friendly destinations hardly get more glam than Cape Town, and there are enough bars and clubs in the city’s self-proclaimed gay village, the Waterkant, to please even the fussiest of queens. Apart from the Waterkant, a few venues along Sea Point’s Main Road fly the rainbow flag. The beaches to head for are Clifton No 3 and Sandy Bay, the clothing-optional stretch of sand discreetly located near Llandudno Bay.

Most places of interest are clustered in a tight grid of streets in the Waterkant:
Cafe Manhattan
Address: 74 Waterkant St
This cafe is generally credited with getting the Waterkant’s gay scene up and running, is a friendly place to kick off your night.

Lush
Website: www.lushcapetown.co.za
This is the biweekly club held at Sliver.
A new, larger venue for the cabaret and supper club On Broadway ( p156 ) means it’s more
popular than ever – the resident artists are dynamic drag duo Mince.

Actual prices on the respective websites or stores may be different from that mentioned here; please check the prices on the respective websites or stores before purchasing. All prices mentioned on this website are in USD, unless otherwise mentioned. Price for regions around the world may show in their local currency and may be different. We apologize for errors and would love to hear from you.