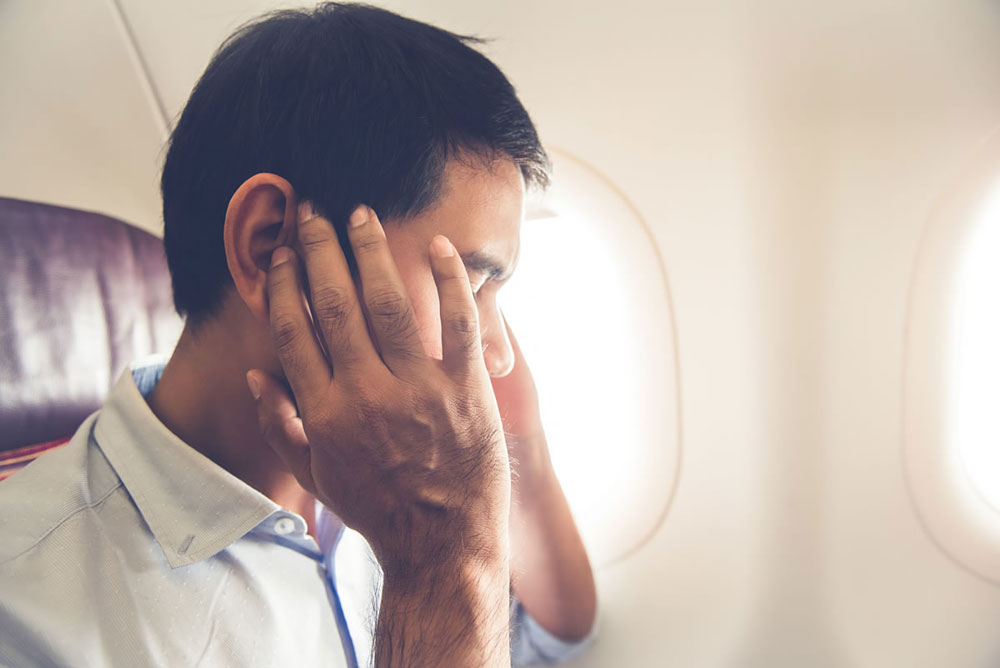 Why do the ears make a popping sensation?

The ear consists of three chambers:

The air in the middle ear is constantly being absorbed by the membranes that line the cavity, so the internal pressure can easily drop, putting tension on the tissues there. Fortunately, air is frequently resupplied to the middle ear during the process of swallowing.

Usually when you swallow, a small bubble of air passes from your throat or back of your nose, through a narrow tube known as the Eustachian tube which is usually closed, into your middle ear. As it does this, it makes a tiny click or popping sound.

This action keeps the air pressure on both sides of the eardrum about equal. If the air pressure isn’t equal, for example if the Eustachian tube isn’t working efficiently or if pressures suddenly change, the ear feels blocked or uncomfortable.

What happens in an airplane?

The pocket of air in the middle ear is particularly vulnerable to the changes in air pressure as you go up in a plane.

The higher the plane, the lower the air pressure around you, although inside the cabin you’re protected, to some extent, from these pressure changes. Pressure in the middle ear remains higher until the Eustachian tube opens up to allow the pressure to equalize. Until this happens the relatively lower pressure outside the middle ear pulls the ear drum and tissues of the middle ear outwards, making them feel very uncomfortable.

The eardrum is stretched and can’t vibrate properly, so sounds become muffled. When the Eustachian tube opens, air travels out from the middle ear, making a popping noise as pressure equalizes.

During the descent in a plane, the opposite happens as pressure builds up outside the ear, pushing the eardrum inwards.

Abnormal pressure can develop in the middle ear, pulling in or stretching the ear drum, when the Eustachian tube is blocked for other reasons – as the result of a bad cold, for example, or a nasal allergy – or because it’s narrow as a result of childhood ear infections.

The following can help to relieve the problem:

The most forceful way to unblock your ears is to pinch your nostrils, take in a mouthful of air and use your cheek and throat muscles to force the air into the back of your nose, as if you were trying to blow your thumb and fingers off your nostrils. You may have to repeat this several times before your ears pop.

Decongestants shrink internal membranes and make your ears pop more easily. Ask your pharmacist for advice. However, you should avoid making a habit of using nasal sprays, because after a few days they may cause more congestion than they relieve.