History
The Skull Tower is a monument to 19th century Serbian rebels. It is situated in Niš, on Carigradski drum, on the old Constantinople road leading to Sofia.

The year 1809 marked the turning point in the course of the First Serbian Uprising against the Ottoman Empire (1804-1813). The outnumbered rebel army faced a 36,000 strong force of Turkish imperial guards near the strategically important southern city of Niš. Rather then surrender or flee they decided to put up a desperate last stand at Čegar hill. Faced with imminent annihilation, the rebel commander Stevan Sinđelić in an act of desperation fired a shot into a gunpowder keg at the fully stocked gun powder room, blowing up as a result his own entire army as well as wiping out enemy soldiers who were already flooding the rebel trenches.

Deeply ashamed by the rebel force’s bravery, the Turkish commander Hurshid Pasha decided to teach a grim lesson to the freedom loving Serbian nation. The bodies of the dead rebels were mutilated. Their skins were pealed off their decapitated heads, stuffed up with straw, and sent to the Imperial court in Istanbul as proof of Turkish victory. The skulls were used as building blocks for a tower built by the main road at the entrance of the city. A warning to the local populace of an impending fate to any potential future rebels.

In total, 952 skulls were used. In its original form, the tower was stood 15 feet high with a width of 13 feet. Skulls were arranged in 56 rows, with 17 skulls in each row, at each side of the tower. The skull of Stevan Sinđelić was placed at the top. This gruesome edifice, left a deep scar in the Serbian national psyche. However, it failed at its purpose. Serbs rebelled again in 1815, this time successfully, driving off the Turks and winning independence in 1830.

The tower stood in the open air until the liberation of Niš in 1878. By that time, much of the tower had deteriorated from weather conditions or from the removal of skulls for burial by relatives of killed rebels. In 1892, with donations gathered from all over Serbia, a graceful chapel designed by the Belgrade architect Dimitrije T. Leko was built to enclose what was left of the tower. Today, only 58 skulls remain, including Sinđelić’s one.

In front of the chapel stands the monument to Sinđelić, and a small relief depicting the battle, both from 1937. The monument commemorating the battle in the form of a guard tower was built in 1927 on Čegar Hill by Julian Djupon. The lower part is made out of stone from the Niš fortress.

In the years immediately following the building of the tower, the families of deceased rebels chiseled away some of the skulls in order to give them proper funerals. Today 58 skulls in total remain in the tower.

The authorities of Serbia in 1892 built a chapel around the tower to preserve this unique monument representing the nations bravery and sufferings. The skull of Stevan Sinđelić is also on display at the chapel.

Information on Niš
The mighty Tvrđava Citadel dominates the north side of the Nišava River. Nearby is the market and the bus station, while the train station is to the west on Dimitrija Tucovića. The city centre is south of the river. It is in Niš that the trunk road running from the north down the Morava River valley forks into two major lines: – the south one, leading to Thessalonica and Athens, – and the east one, leading towards Sofia and Istanbul, and further on, towards the Near East.

Attractions nearby:
Mediana
Hours: 9am-4pm Tue-Sat, 10am-2pm Sun
Mediana is the remains of a 4th-century Roman palace complex, possibly that of Constantine. Archaeological digging has revealed a palace, forum and an extensive grain-storage area with some sizable, almost intact, pottery vessels. The museum shelters some important mosaics and a collection of artefacts.

Thermae are situated northwest of the villa with peristyle and were probably connected to it. The entrance to the bath is from the south side. The thermae of Mediana were probably used by the owners of the villa, who could reach them directly from their rooms. The corridor on the way to the thermae is decorated by floor mosaics, with geometric patterns of the same quality as the mosaics in the peristyle. The vestibule and apodyterium are covered by brick and the middle room is partly covered with brick and partly with mosaic made here of larger white marble tessarae. 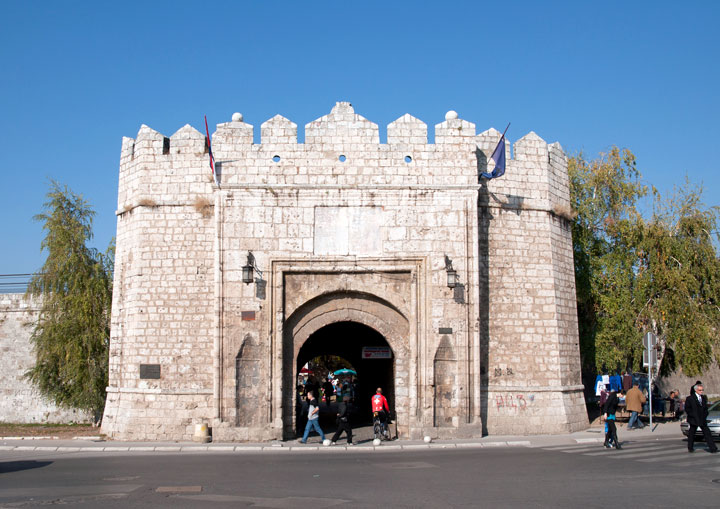 The Niš Fortress complex includes the remaining parts of the Early Byzantine road and the remnants of the Settlement (5th and 6th century) in the central part of the fortress near the Bali Bey’s Mosque; the old Turkish bath (15th century) near the Stambol Gate at the entrance to the fortress, which was built of brick and stone; the Bali Bey’s Mosque (beginning of 16th century) in the central part of the fortress, which was turned into a gallery after the restoration works in 1972; the Turkish Powder Magazine – the complex of four edifices, the ground floor rectangular structures along the southern ramparts of the fortress; the Turkish Arsenal near the Stambol Gate – after the restoration it became a gallery of modern arts, whereas in the vaulted rooms – once reserved for the guards – smaller galleries and a souvenir shop were housed; the building of the Historical Archives on the north-western side of the fortress, an elongated ground floor edifice; the remains of a Roman building with mosaics (2nd – 4th century) at the northern side of the fortress.